Two weekends ago we headed back out to Lincoln City for the first time since the wind storm and Echo Mountain fire not knowing what to expect.  Amazingly our house had no damage despite a billion small branches covering every square inch of our property. Some of the alders were blown completely leaf-less making it look wintery and weird for late summer.  A lot of our neighbors were not as lucky with huge trees down all over and one neighbor's shed had blown out the back of their yard onto a sidewalk (below). 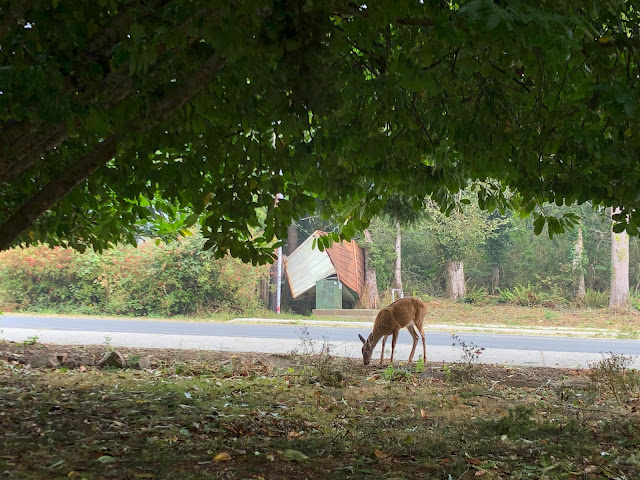 We fit in some birding between all the cleaning up, like an afternoon visit to the Salishan Nature Trail. We walked out to the beach where a lot of birds were relatively close in for once. 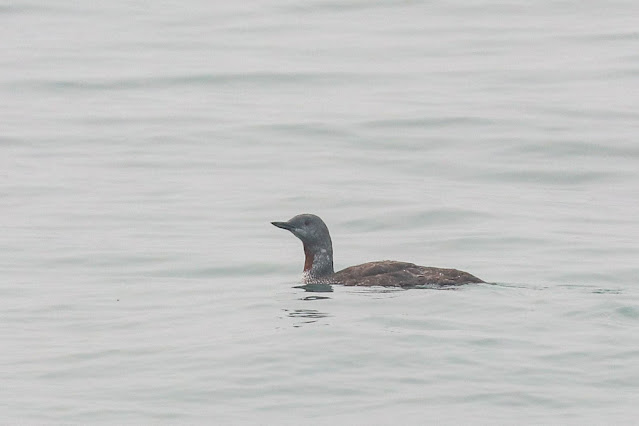 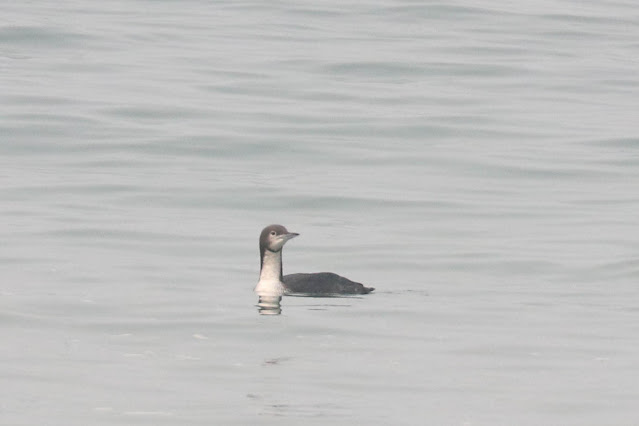 We had some good shorebirds on the beach like a couple of Black-bellied Plovers and a Baird's Sandpiper. 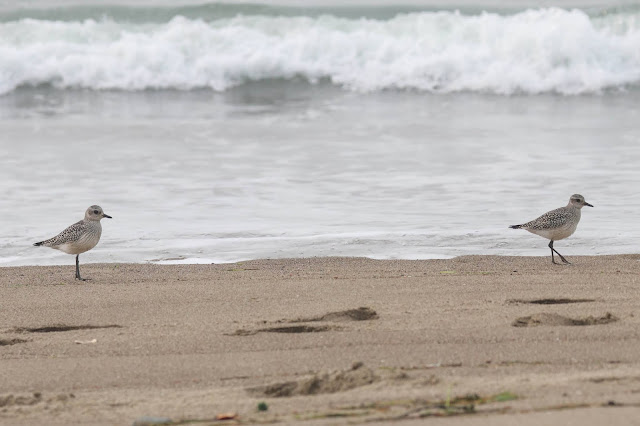 During the week I visited the Salmon River Estuary a couple more times hoping for more shorebirds though there are many other distractions there. 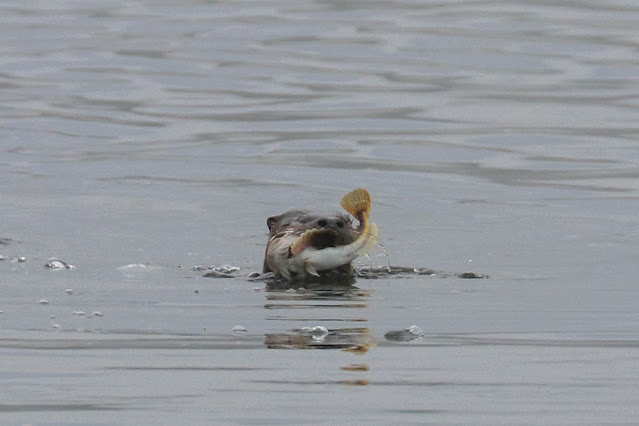 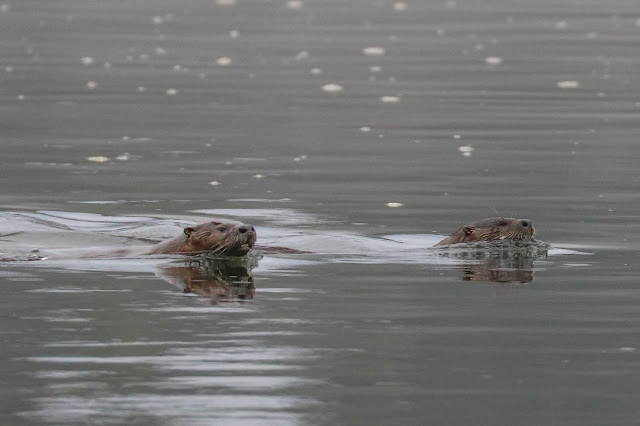 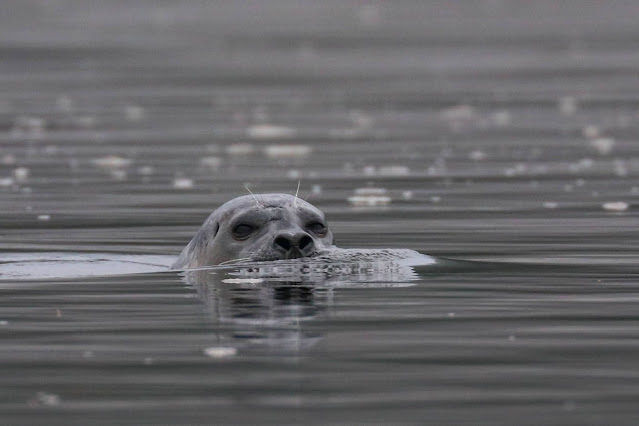 I did have some success with shorebirds one morning with a couple Dunlin mixed in with Westerns and Leasts. 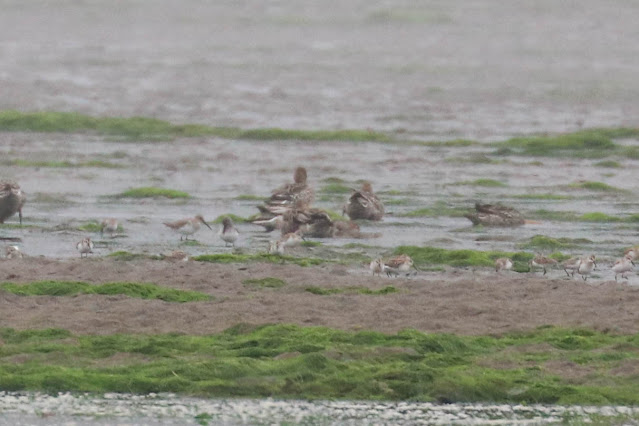 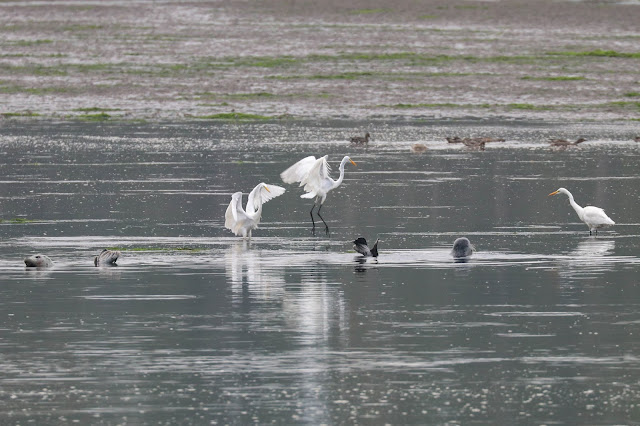 Another visit to the area turned up zero shorebirds and zero ducks. A first of fall Fox Sparrow at the end of Savage Road was pleasant. 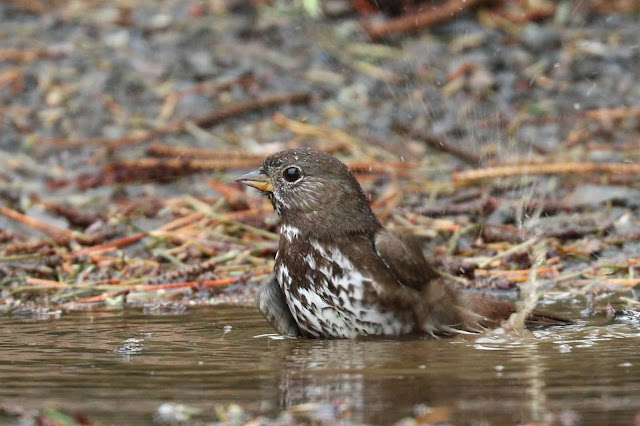 On my drive home on 101 I got to watch a crew cleaning up one of the many large trees that fell during the storm. 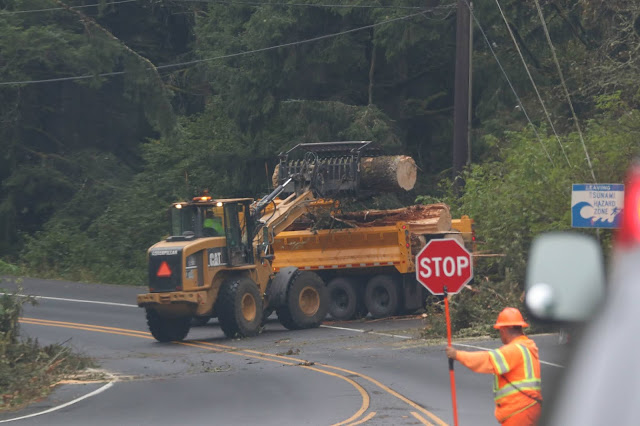 I hit the sewage ponds a couple times last week as well with similar results: shorebirds one day and none another day. 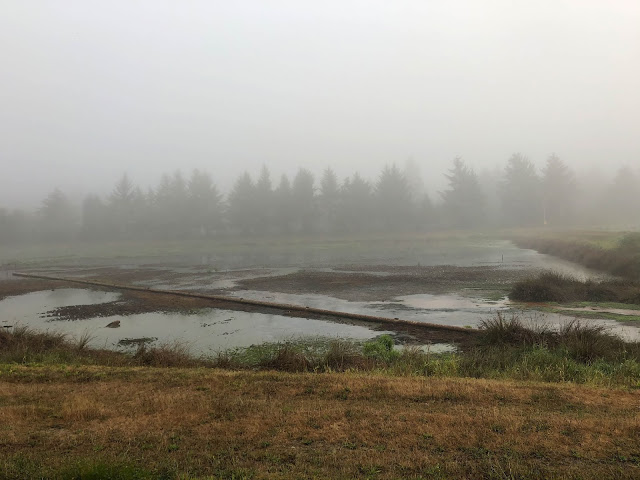 The best birds were 9 Pectoral Sandpipers!  Crazy number, plus a county/5MR bird. 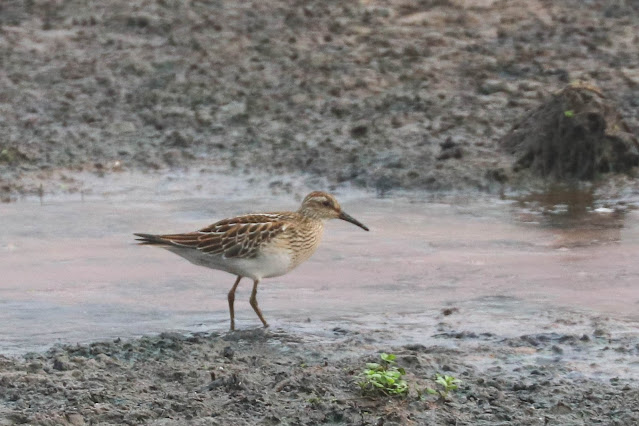 Nothing else interesting there but it will turn up something really good someday.

The yard in Lincoln City has been fun with more birds exploring the water feature like Steller's Jays, robins, a starling and finally a Western Tanager! 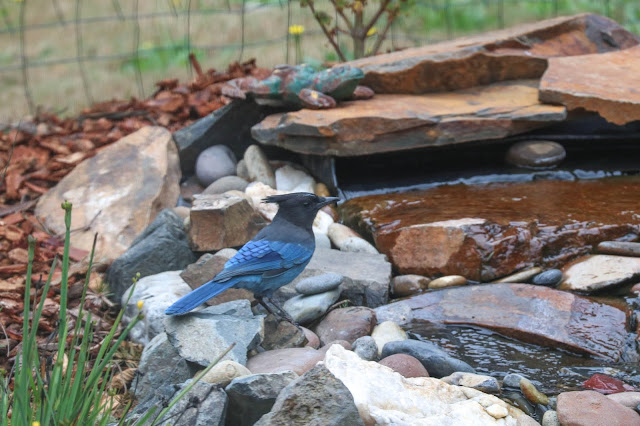 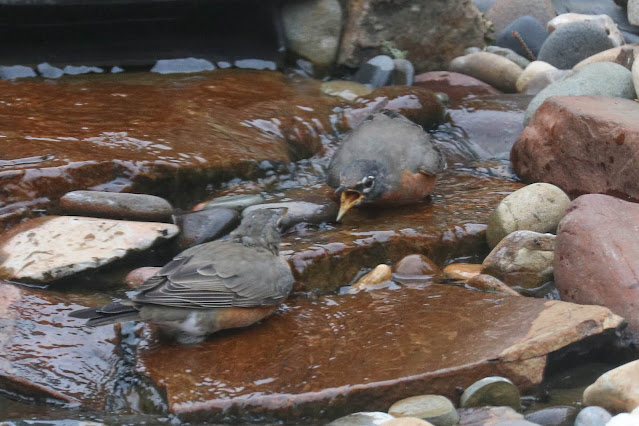 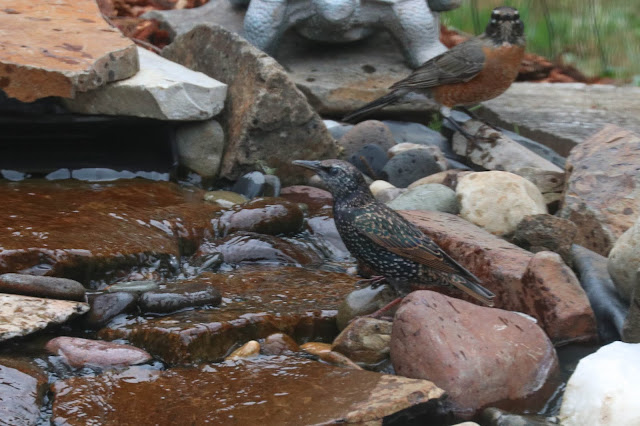 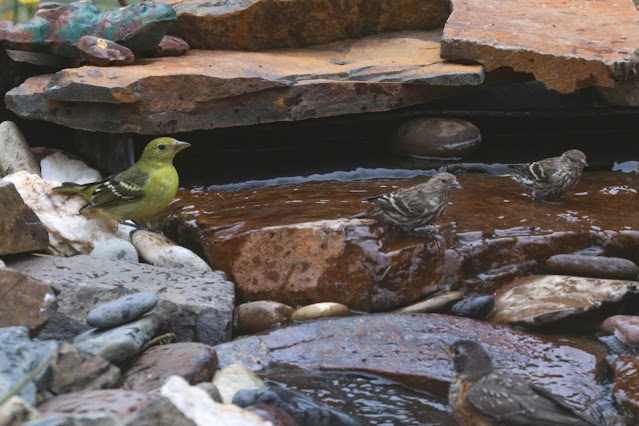 A few weeks ago we took our feeders down to try get rid of the siskins when their numbers got too high.  We had success but that number recently spiked again and we started seeing sick birds. Feeders are down again but Ralph has become obsessed with "helping" remove the weak ones which tend to sit around on the ground or near the bath.  Yay.

In other news this Steller's Jay that I thought had lost an eye is doing well! This is how it looked on August 3rd: 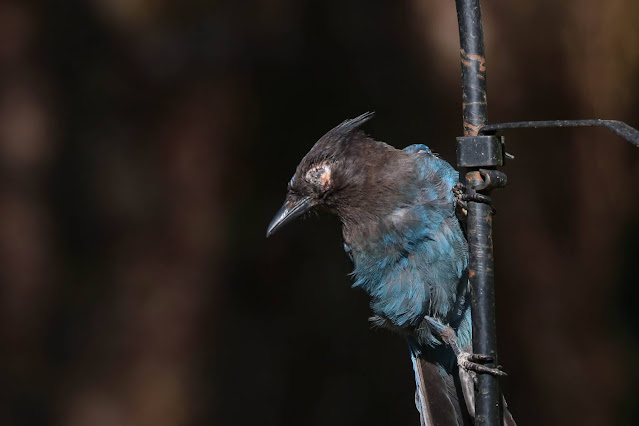 And how it looked last week: 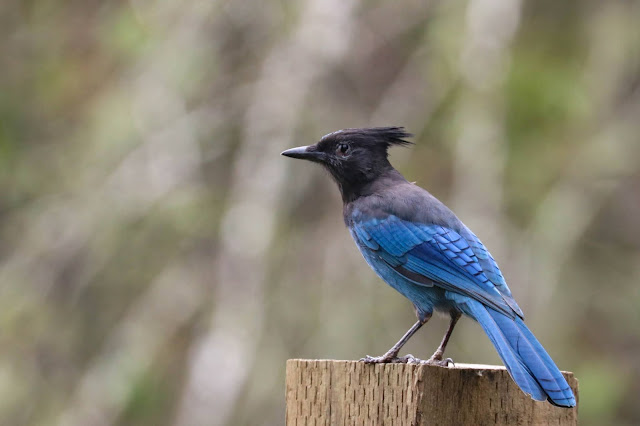 That's about it bird-wise.

While we were there they reopened Highway 18 where the Echo Mountain Fire occurred.  It was nothing short of horrifying and very emotional to drive through the area seeing dozens of homes and structures completely burned to the ground.  The estimate is 293 homes burned with over 1000 other structures.  This is what the evacuation levels looked like while I was out in eastern Oregon: 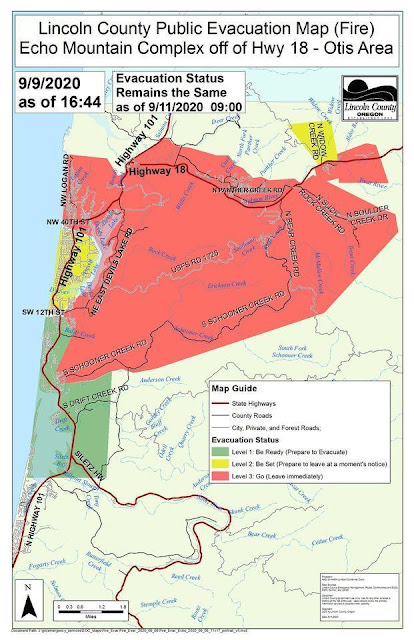 Our house is in the yellow between 101 and the lake.  The fire reached within 1.5 miles of our house and even briefly jumped 101 but was stopped quickly. 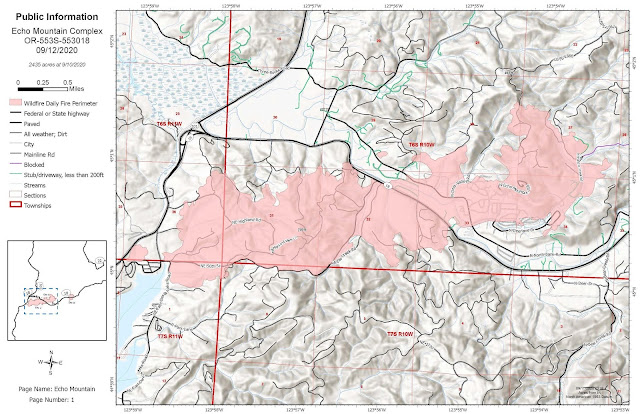 It burned 2552 acres and the cause is still unknown, but amazingly no humans were killed.  There's an article about it in the Oregonian here.