Looking back at this year's blog posts I see that Vancouver, where I technically live, has barely received a mention.  Has the birding really been so bad here?  Part of the problem is that COVID has really affected how the homeless population is handled and my favorite 5MR birding spots have been completely overrun with camps.  Seeing natural areas being destroyed is hard. Seeing people suffering is also hard. My mixed feelings generally turn into frustration and make me want to avoid birding my 5MR spots.

That said there's been decent birding outside my 5MR recently. 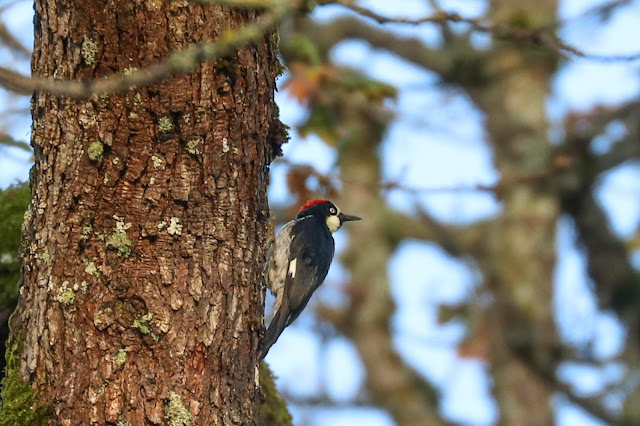 Back in fall of 2014 I chased a couple of Acorn Woodpeckers reported by a local birder at Fort Vancouver.  They stayed the winter but weren't reported there again until a single bird this spring.  In October two showed up again and November brought a third bird. Fingers crossed for a future colony! 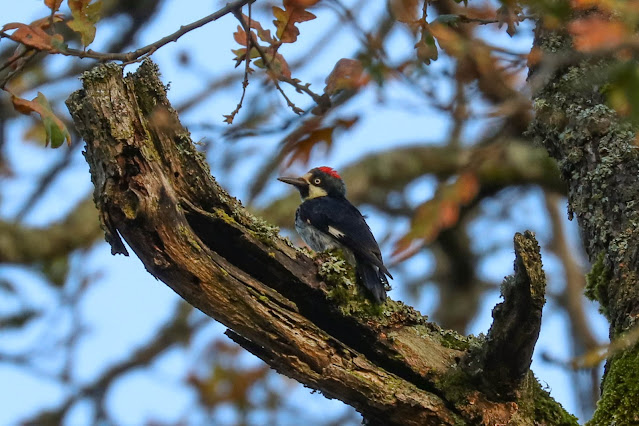 Jacob and I visited them a couple weeks ago for a combined birding/dog-walking outing.  As we walked the dogs along the main road through the Fort I saw a bird cruising overhead.  I said "corm" then looked through my binoculars.  Not a cormorant but a freakin ibis! 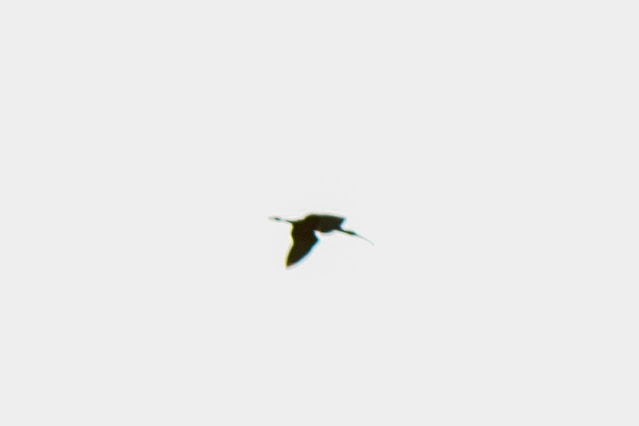 Jacob managed a few shots as it flew into the sun and then south.  Likely a White-faced but the eBird reviewer pointed out we could not eliminate Glossy at this weird November date and weird location. A few days after this a confirmed White-faced Ibis showed up at Ridgefield NWR and I'm curious where they came from.

That same day we went up to Larch Mountain to see if we could get in on the winter finch fest that's been occurring.  Pine Grosbeaks and White-winged Crossbills had both been seen the week before.  We arrived at the gate below the Larch Mountain Trailhead (Thrillium mountain bike trail) and found fog and the sounds of target practice. We walked past the trailhead down an old logging road and soon heard the weird tanager-like sounds of Pine Grosbeaks! 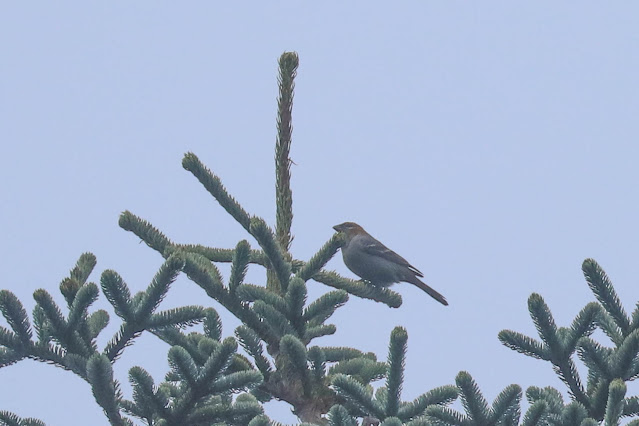 The flock would feed for awhile then disappear to another spot, then we'd catch them again somewhere else.  This went on the whole time we were up there. 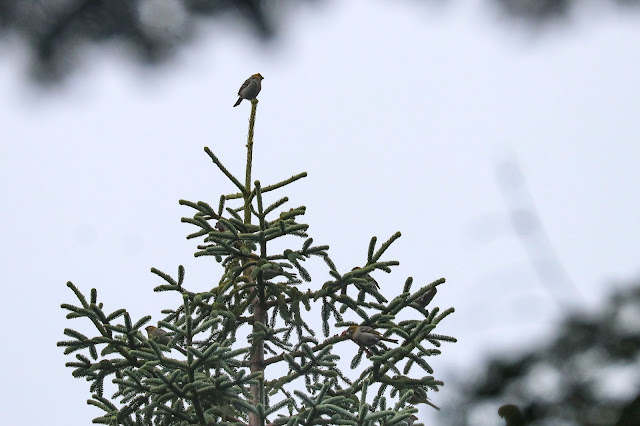 It was hard to get a good count of the birds but I took a video of them flying off at one point and counted 15 birds.

So cool!  This is the same location we found a Cassin's Finch a few years ago so definitely a good finch spot!

At one point I embarrassingly yelled "is that a turtle?!!!" 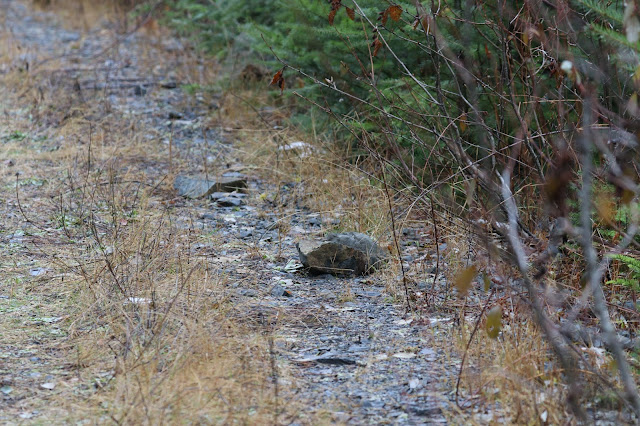 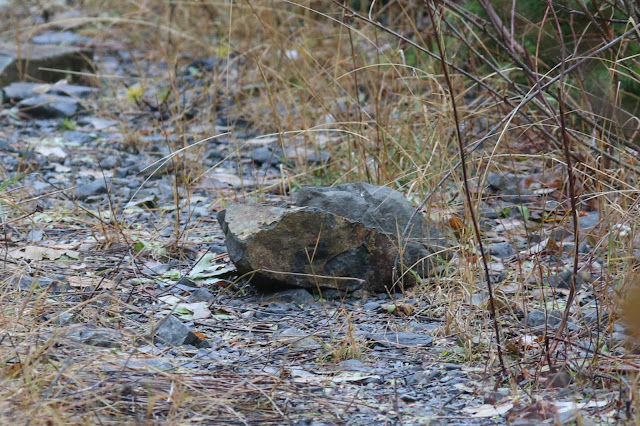 Jacob was pleased with his lifer Pine Grosbeaks. 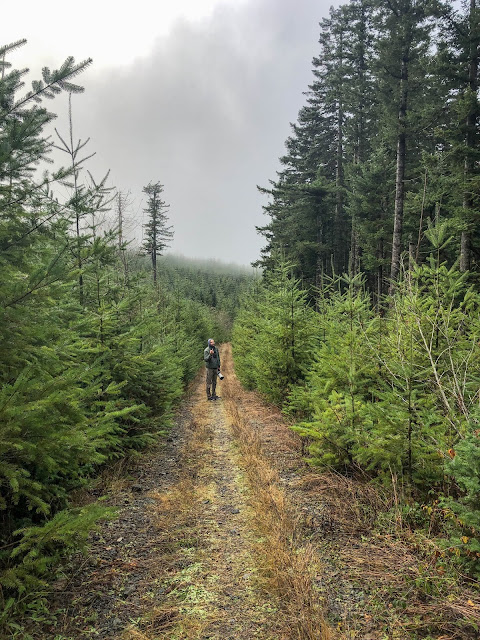 On Halloween Jacob and I were driving up to Lower Lewis River Falls and I made a comment about how there should be an owl somewhere.  Maybe five minutes later I spotted a Barred Owl in a tree in someone's yard. 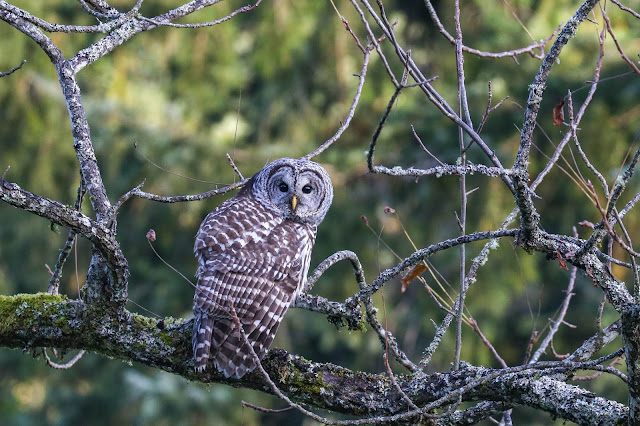 Unfortunately soon after that the tire pressure light came on and we decided to turn around. The next morning we tried again, this time with a banana, and had better luck. 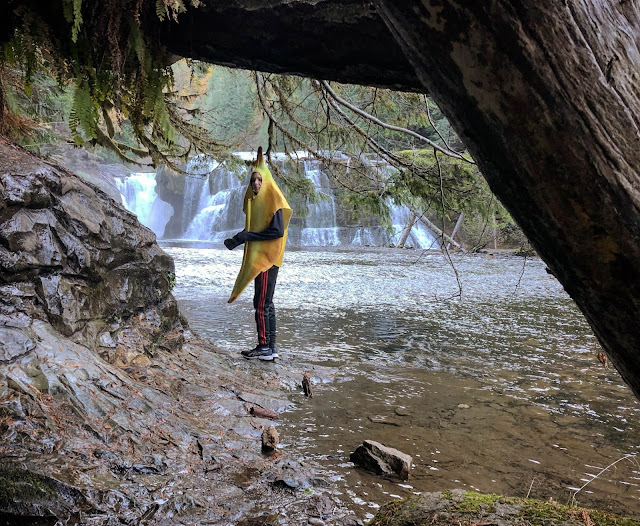 In the afternoon I got word of a Northern Saw-whet Owl near Vancouver Lake, outside my 5MR.  Most of the Vancouver birders I know convened to get some terrible views of a great bird (scope views were better, I swear!). 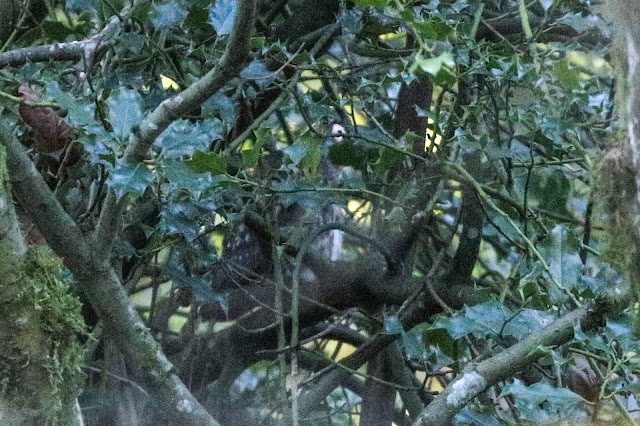 This was the most socializing I had done in months and even masked and distanced it was kinda nice to talk to people.

At the beginning of lockdown in April I started going through old photos and adding them to eBird checklists.  Once I learned you can search for photo targets (Explore--> Target Species --> funny little wheel in top right --> change the Targets Category to Photo Targets) I started trying to get as many species uploaded as possible.  Then as many in Oregon as I could find, then other states and eventually counties.  I have these little target lists in mind when I go birding now so things like this happen: 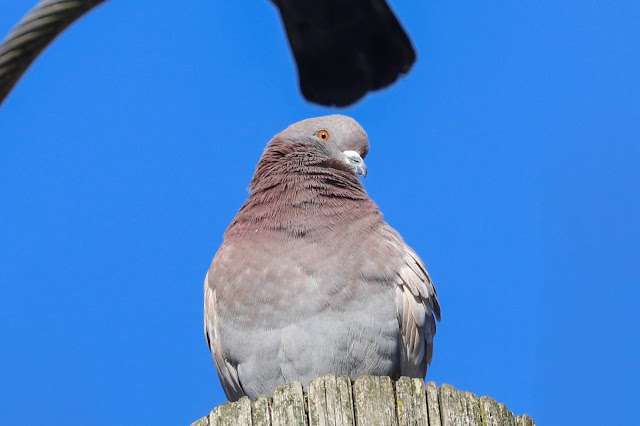 I needed a photo of a pigeon and this pond along Evergreen Highway a good spot for them.  Target acquired.

One spot in my 5MR where I don't feel uncomfortable is the cemetery near my house.  I walk the dogs there a few times a week when I'm in Vancouver and it has a lot of potential.  So much so that a few times this fall I visited with my camera rather than the dogs, like on election day. 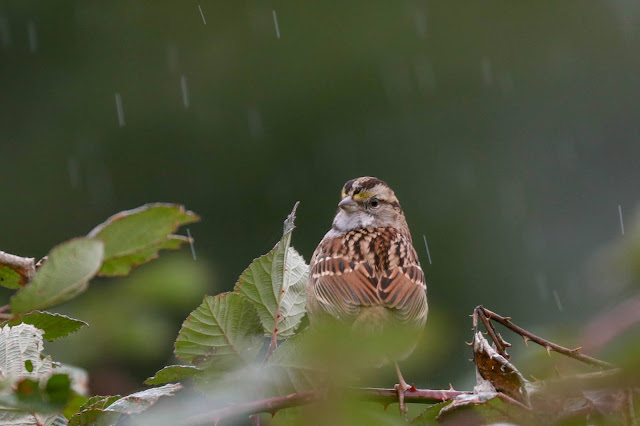 White-throated Sparrow is always a nice bird and it was new one for me at the cemetery. There are a few fields along the east side that a local farm has used for years, growing pumpkins or corn or whatever.  I keep hoping for longspurs or Snow Buntings but none yet.

Our yard has been mostly unexciting this year but with the influx of siskins has come a fine-looking Sharp-shinned Hawk. 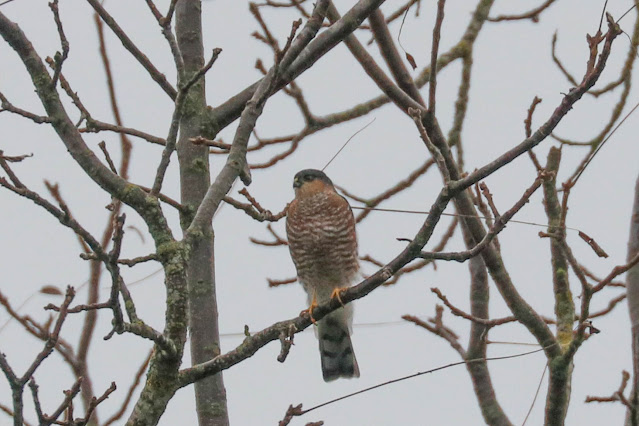 We witnessed one successful kill on Thanksgiving and hopefully they keep coming. 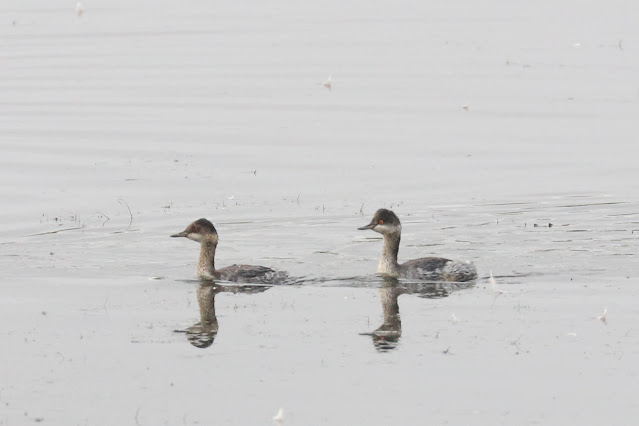 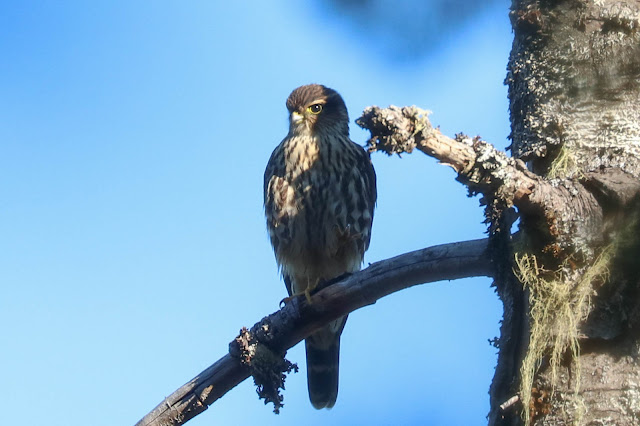 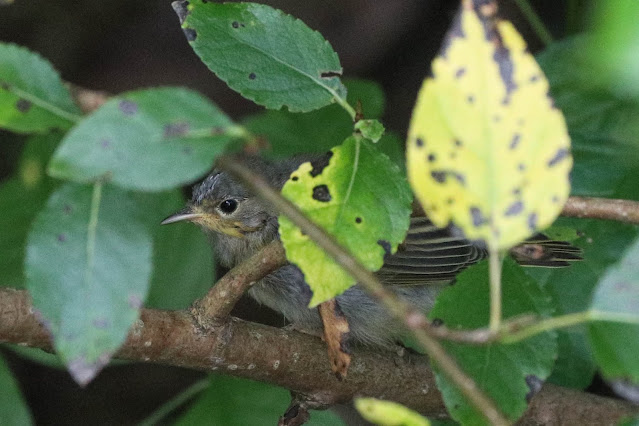 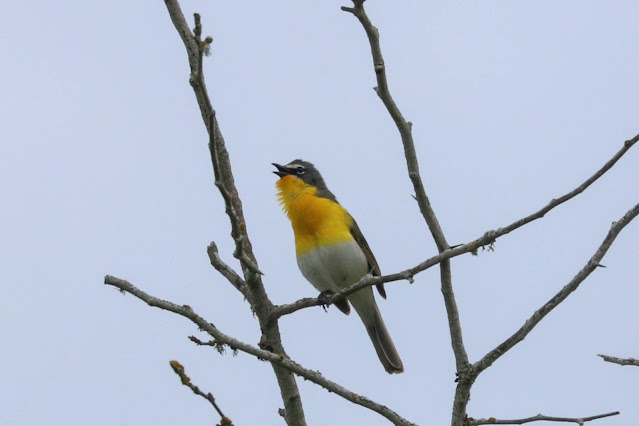 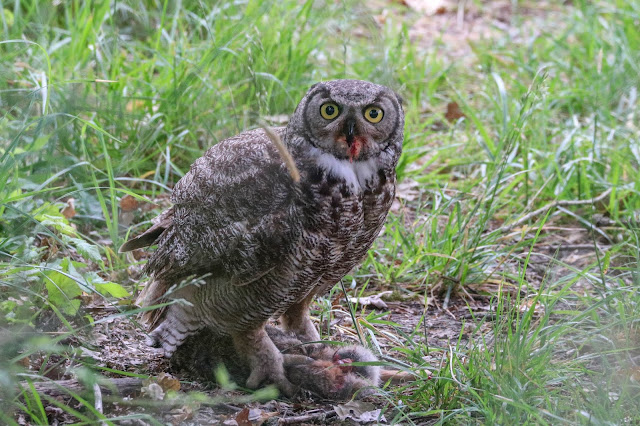 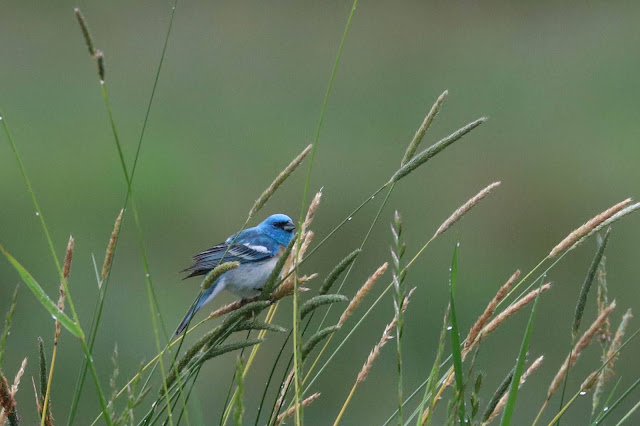 Alright now we're pretty much caught up on things.  Hope y'all are healthy and surviving these weird times!