February in the 5MR

Winter is still here. Because of that and the recent snow and ice storms we have spent more time in Vancouver than LC this month, mostly birding in or near the 5MR.  The first week of the month was pleasant weather-wise, deceptively spring-like. 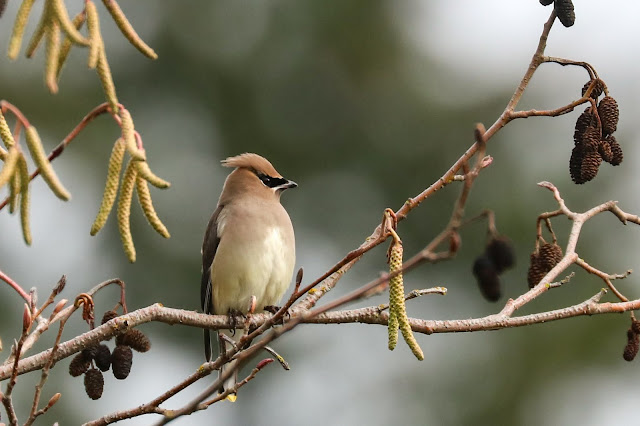 Jacob and I had a ridiculously birdy afternoon walk at Columbia Springs, our 5MR fish hatchery, with FOY Cedar Waxwings, a calling Hutton's Vireo, and singing Dark-eyed Juncos. 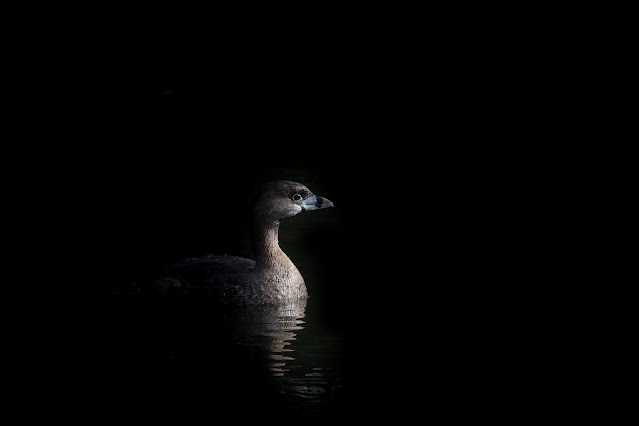 Not my style but it happened: Pied-billed Grebe, Columbia Springs 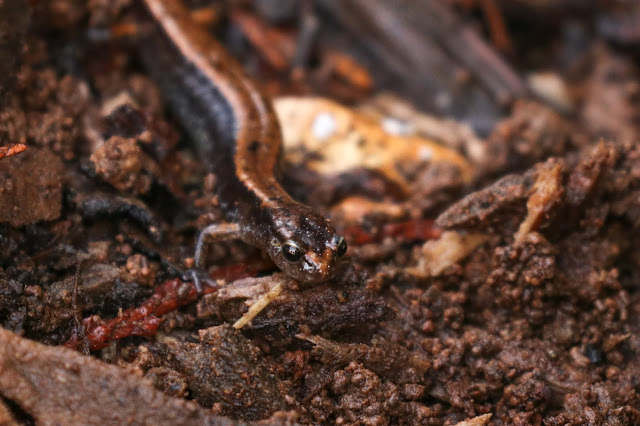 Another day I went out to my "walmart" patch, a stretch of road along Burnt Bridge Creek that hosts a large marsh and a row of white oaks. It was sunny and hard to believe spring had not yet arrived. 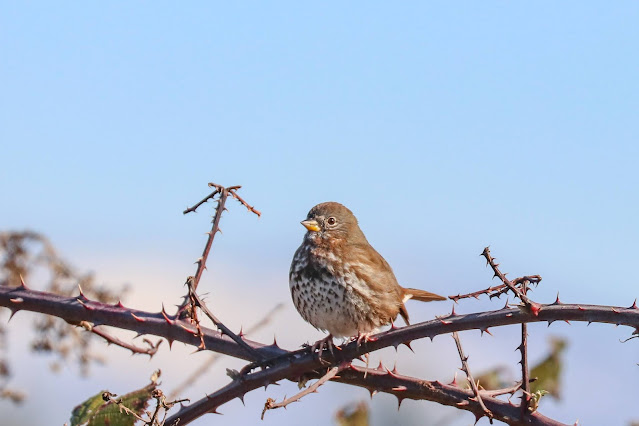 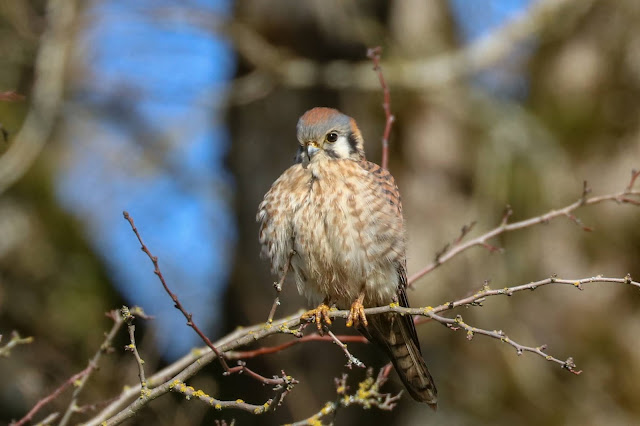 I wanted to keep birding so I decided to check out Hockinson Meadows, a park that was brought to the attention of local birders when someone reported an interesting sapsucker on January 1st. It turned out to be a hybrid Red-breasted X Red-naped, but I was still curious about this park in my 5.2MR.

It's located on the edge of the urban growth boundary of Vancouver, surrounded by farms and newer housing developments. As I drove in I could tell I liked it even though many people were out enjoying the sunshine. 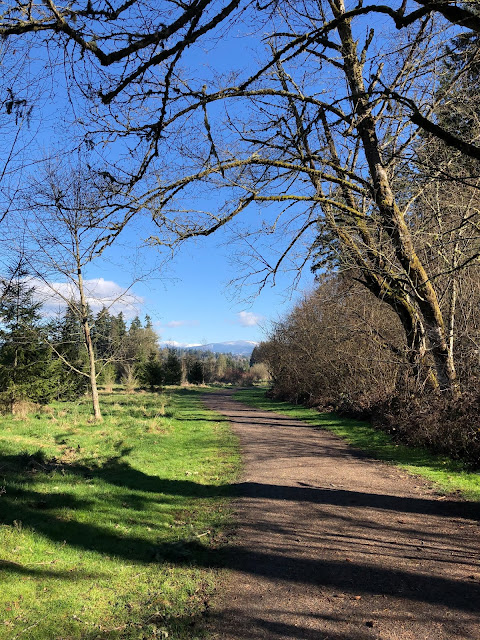 There are both paved and dirt trails, baseball fields, a dog park, and a playground.  The habitat includes forest, open field, a small stream, and multiple wetlands. 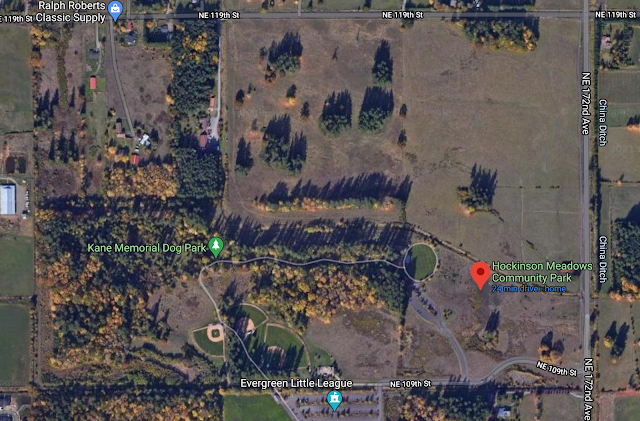 On my visit I only had 23 species but the volume of frogs was impressive enough for me to return.  I moved off the trail to wait for some people to pass and ended up watching a pair of robins look for worms for a weirdly long time. 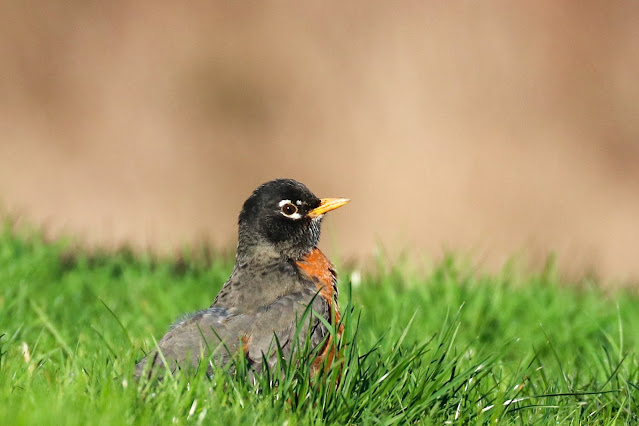 The last morning before the weather events hit I birded Marine Park. 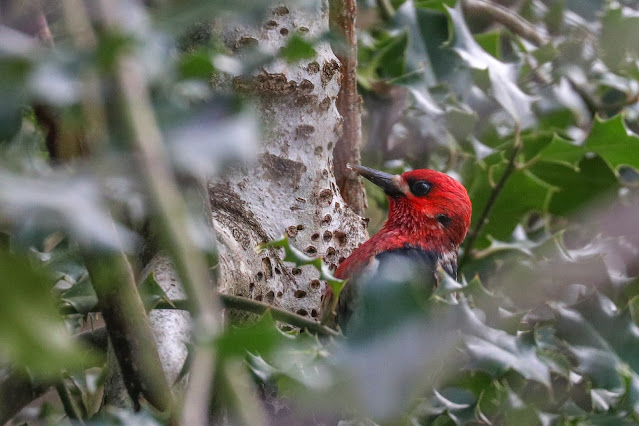 Down on the beach near the Tidewater Cove condos was a male Barrow's Goldeneye. My first thought was how cool to see one out of the water. 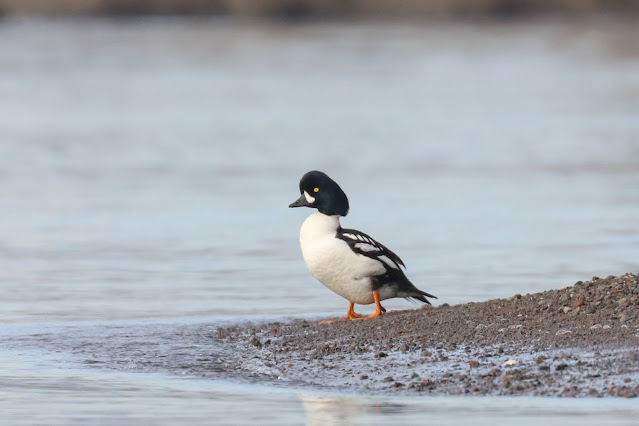 He soon got back in the water and swam around but I noticed he was really annoyed by something on his wing and would not stop trying to mess with it. He came back to shore and resumed the behavior, giving a big wing stretch which showed off his injury. 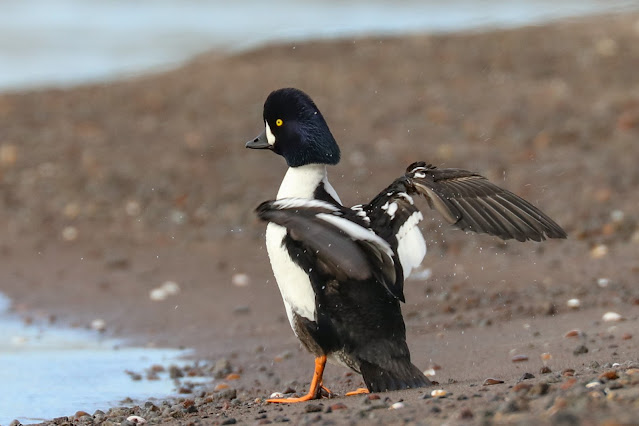 Hopefully he provided an easy meal for an animal that needed it during the storm that arrived the next day.

First the snow came, nothing too wild, but a solid dusting.  The temperature dropped quite a bit making the heated bird bath popular. 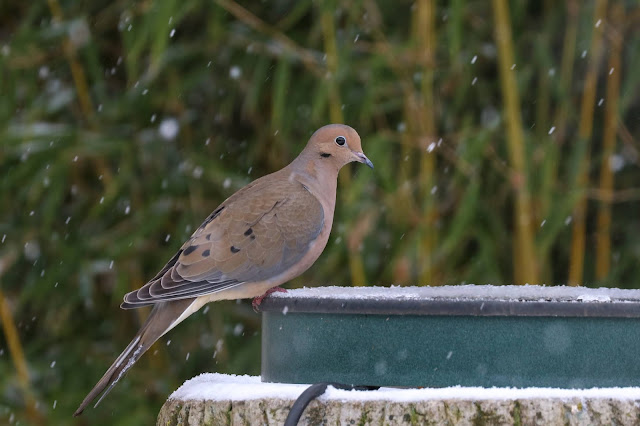 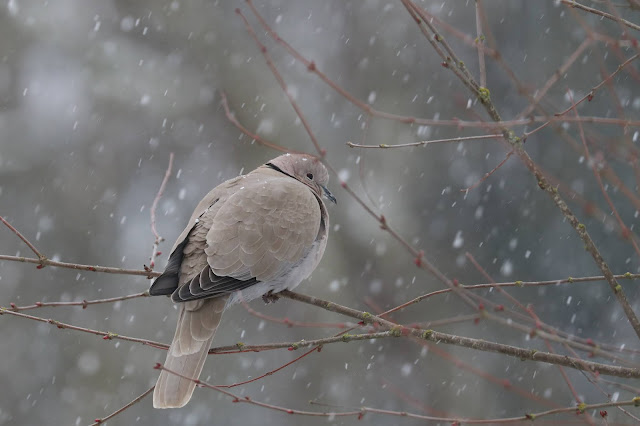 Both Mourning Doves and Eurasian Collared-Doves visited the yard frequently during the weather events. Our Lesser Goldfinch numbers increased dramatically including a black-backed individual which has been a consistent visitor this winter. 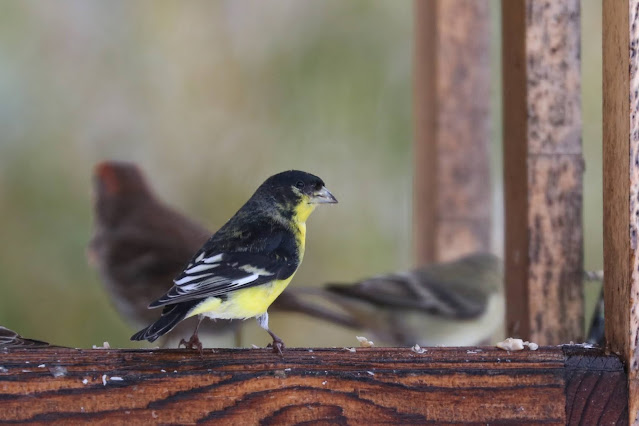 I would love to know if this bird actually traveled from the south or east where black-backed is the default coloration, or if it could possibly occur naturally in a local one.

Finally the snow arrived for real. It was super windy and the snow was different depths all over the yard, but my best guess is somewhere around 9". 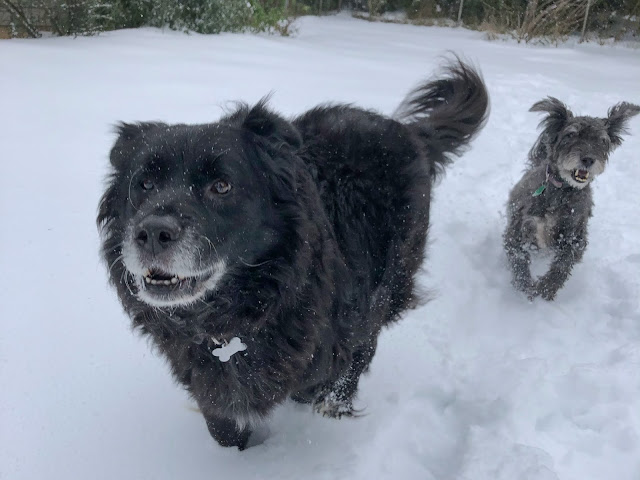 Keeping the hummingbird feeders unfrozen was a priority and we had quite a few visiting. 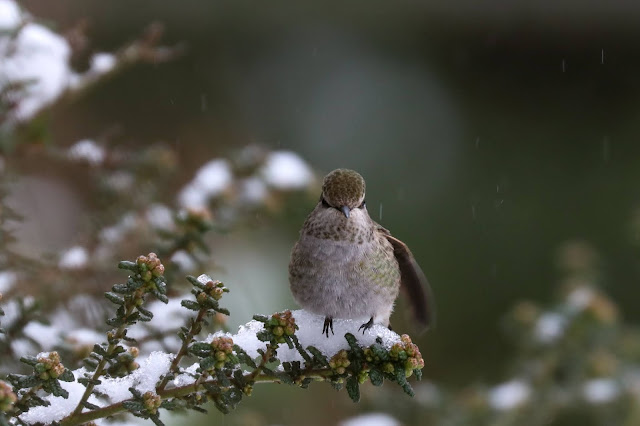 Finally on the afternoon of Valentine's Day the temperature crept above freezing making snowpeople possible! 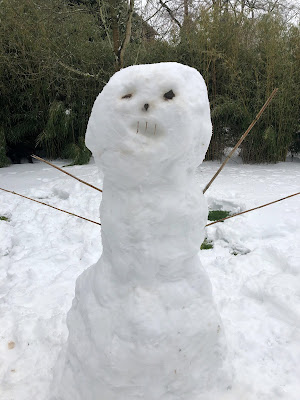 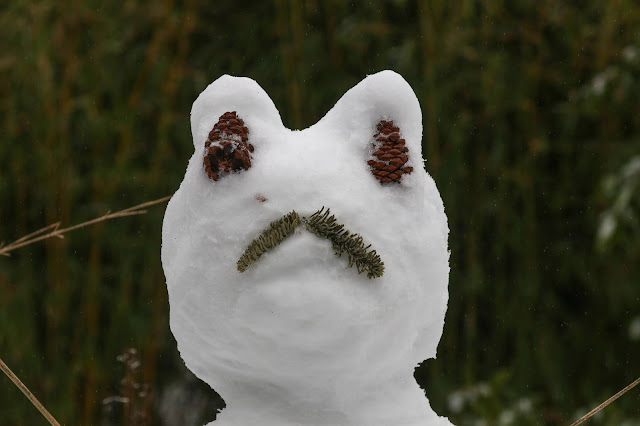 (Mine is a huggable monster, Jacob's is a frog with a mustache)

The snow began to melt after that but not very quickly.  I took the dogs for a walk at our neighborhood cemetery and a bird in a flock of Savannah Sparrows had me thinking longspur for the split second I saw it.  I returned without the dogs and with my camera and found a one-eyed Savannah Sparrow that does not look like a longspur, but I suppose that's what I saw. 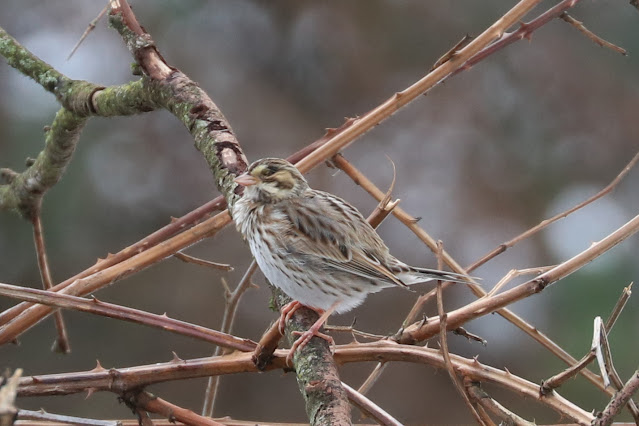 That afternoon Jacob and I visited Hockinson Meadows so he could see this cool park but the snow made things a bit...damp. 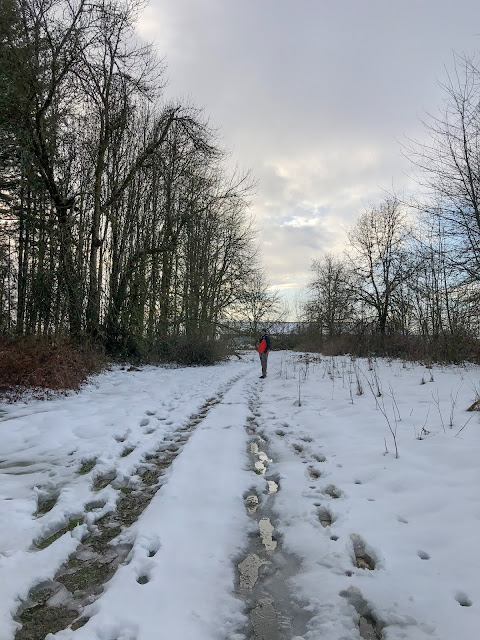 We heard a Great Horned hooting and watched a Red-breasted Sapsucker flycatching.  Poor pics but I had never seen this behavior before from a sapsucker. 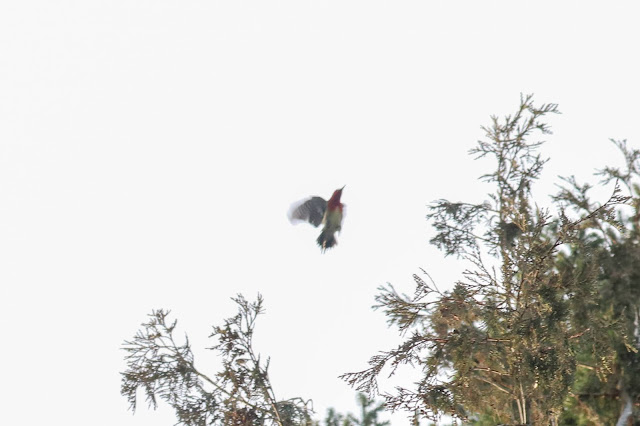 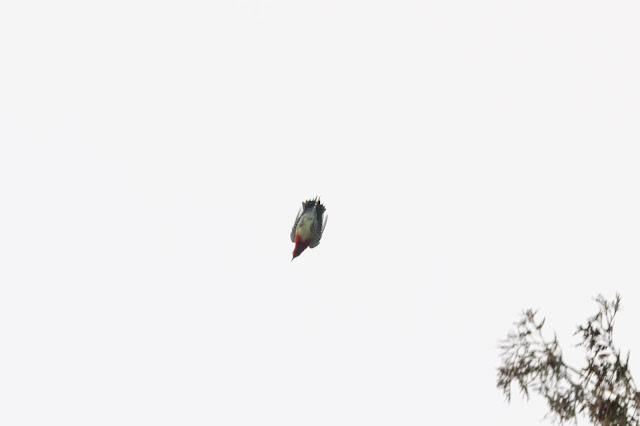 It flew out from this cedar (?) over and over and over, taking brief breaks on the trunk.  It was still going when we left.

In less pleasant news, Jacob noticed a couple of chickadees were visiting the bird house outside his home office window. That part is pleasant.  He decided to clean out last year's nest and found this: 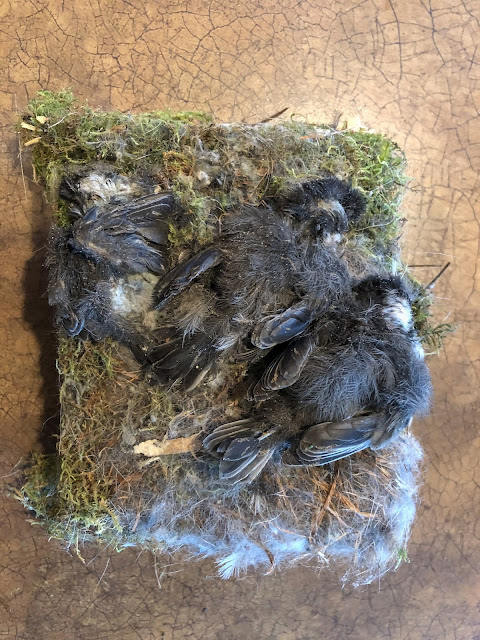 The most likely scenario is one of the parents was killed and the other parent was unable to raise them or abandoned them.  Hopefully this year is as successful as it was in 2019.  2020 wasn't exactly anyone's best year.

Also in the less pleasant news department, the property behind our house in Vancouver is finally being developed.  We knew it would happen, it was the last available open land around here.  When Jacob bought this house it was surrounded by a few single family homes, fields, and a nursery. Then it got rezoned to high density to help with the housing crisis. I get it but it sucks to suddenly be surrounded by apartments and townhouses.

Here is the view out our back door during our COVID quarantine just before they tore down that little blue house and garage: 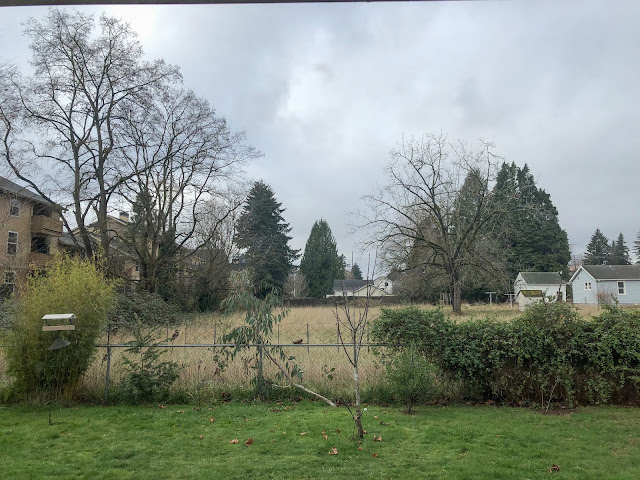 This week they came back for the trees and blackberry bushes (on left side of field).  That big black walnut tree in the middle was a favorite of the birds for perching. They took down all those awesome cedars on the right so we now have a clear view of a senior living facility. 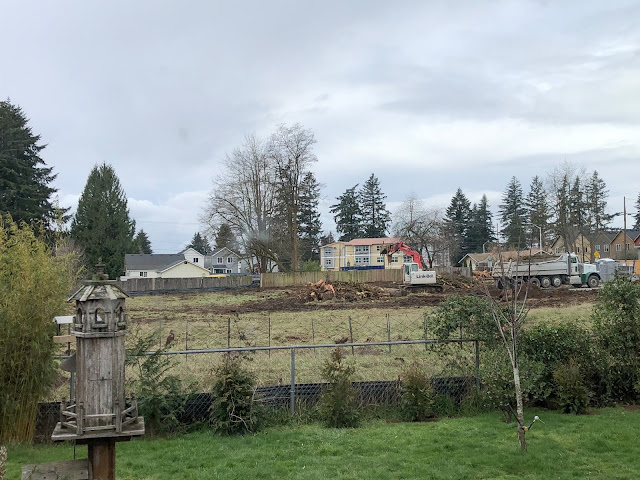 Soon our view will be of 20 townhouses instead.

Ok enough whining.  Here's a handy tip for those of you that use the eBird app on your phone and also enjoy 5MR birding.  You can now see what species have been seen in your 5MR that you might need for your year or life lists. 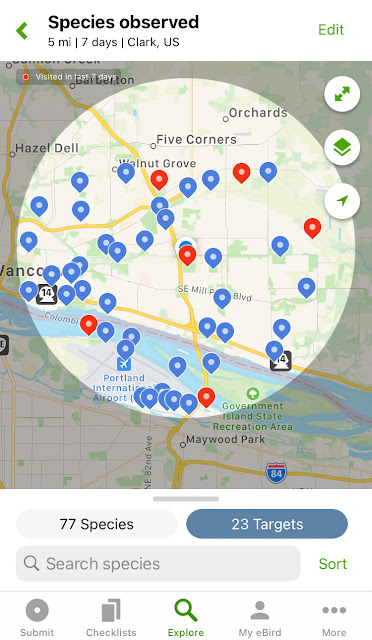 By clicking on "Edit" in the top right you can adjust what sort of targets you would like presented. 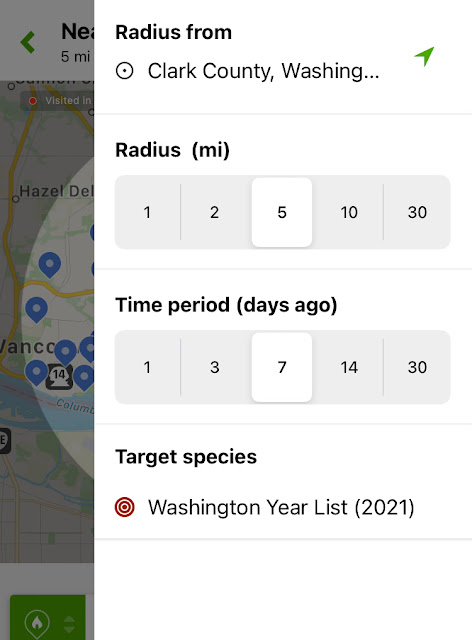 So I chose to look at birds seen within my 5MR in the last 7 days that I need for my Washington year list (choosing Clark County would have worked also).

If you click on Targets (mine says "23 Targets") it will show you a list of birds you need: 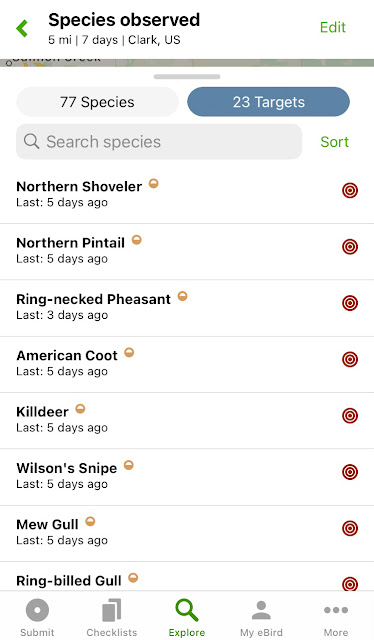 Clicking on them tells you where they were reported. It's not a perfect system because you may have seen birds in your county outside your 5MR but it can still be helpful.

Lastly, the birding community has been dealing with some shit this week.  I believe Aisha and Amber and all the other women who have spoken out about their traumas.  If you don't know what I'm talking about you can google it, I recommend starting with keywords "Jason Ward" and going from there because he's not the only one. Not by a long shot.

Take care of yourselves and each other out there.