Yesterday I went out to Sherman County east of the Cascades to do some hiking and birding.  My first stop was Deschutes River State Park which is still one of my favorite spots in Oregon. 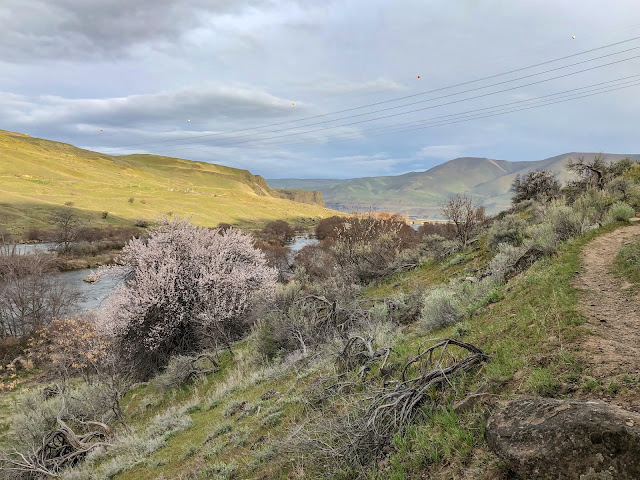 It was nice to see lots of wildflowers blooming already and despite all the campers and backpackers parked in the lots, I saw very few people on the trails I hiked. 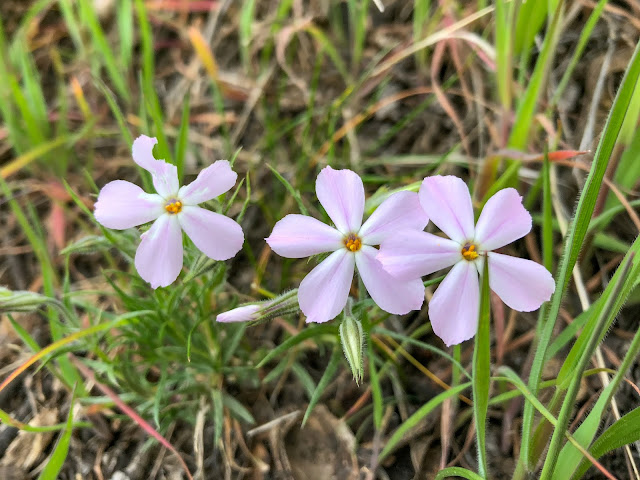 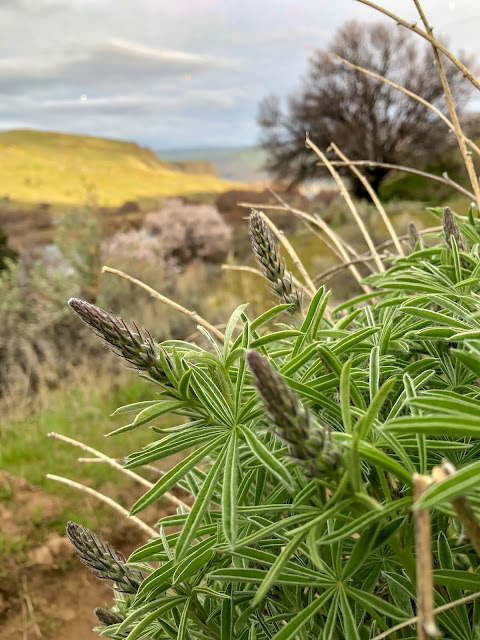 I hiked a loop up the upper trail and back down to the river and back seeing plenty of birds along the way.  My county Marsh Wren was singing along the river and my county Lincoln's Sparrow popped out of a flock of Golden-crowneds. 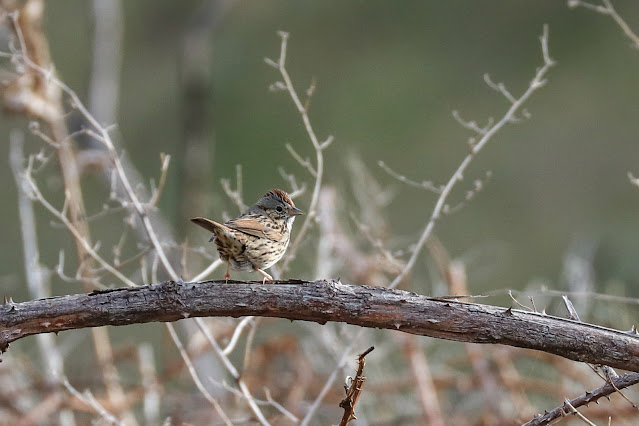 Some ducks close to shore spooked as I approached, including this one that had me muttering wtf: 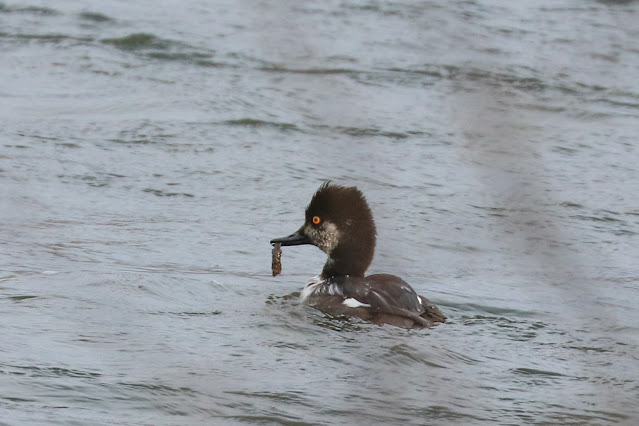 I was confused.  Was it a weird Hooded Merganser? Could I turn it into a goldeneyed Smew? What? 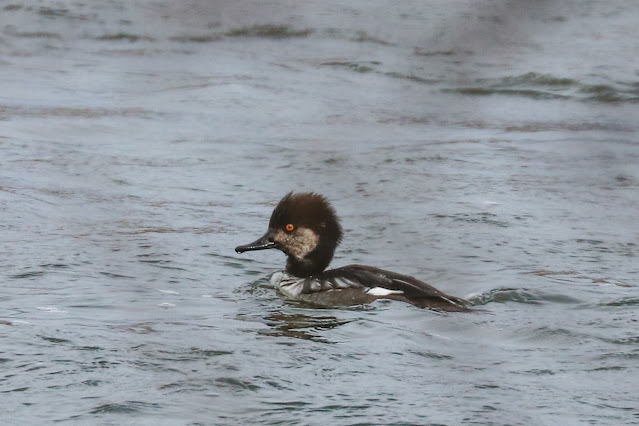 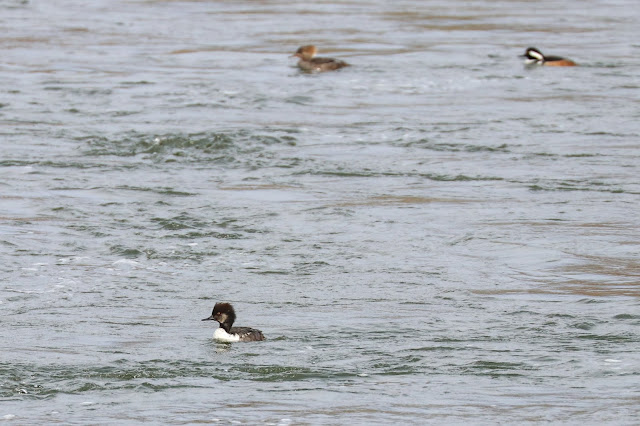 I ultimately decided it was some bizarre molt situation of Hooded Merganser I had never witnessed.  Later when I got home I looked at eBird and saw David Mandell had been there the same time as me and identified it as a Common Goldeneye X Hooded Merganser hybrid.  Aha! That makes sense I think.  Super cool bird. 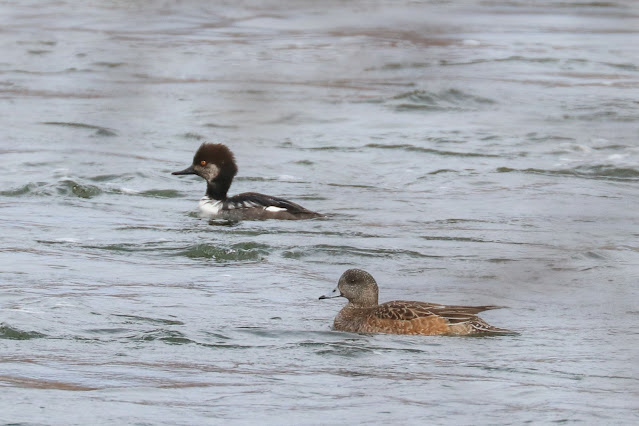 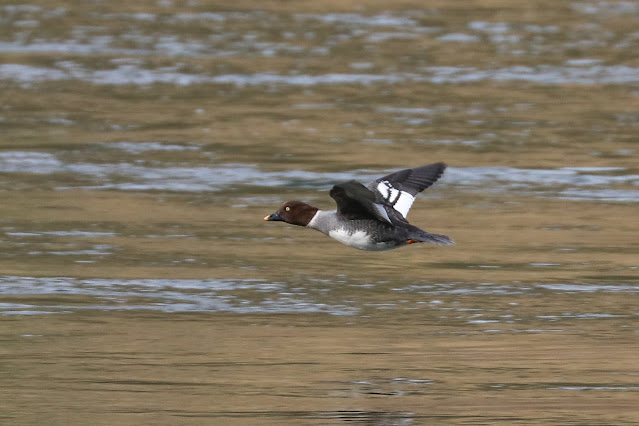 I finished my hike with 40-ish species, then headed east to the ponds between Biggs and Rufus.  Finally, a Say's Phoebe for the year. 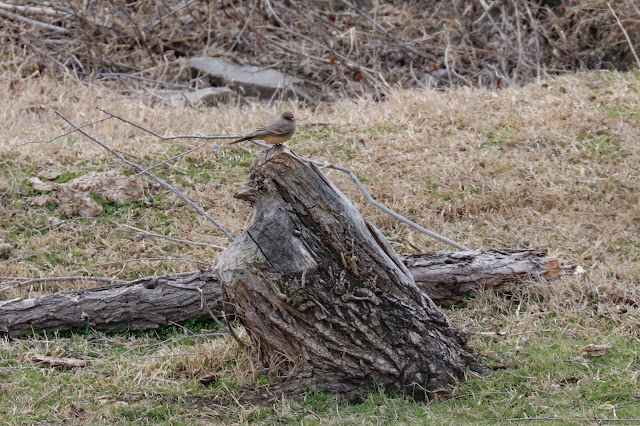 I drove down 97 and took a right on Mud Hollow Road which was mostly quiet but lots of Wild Turkeys. 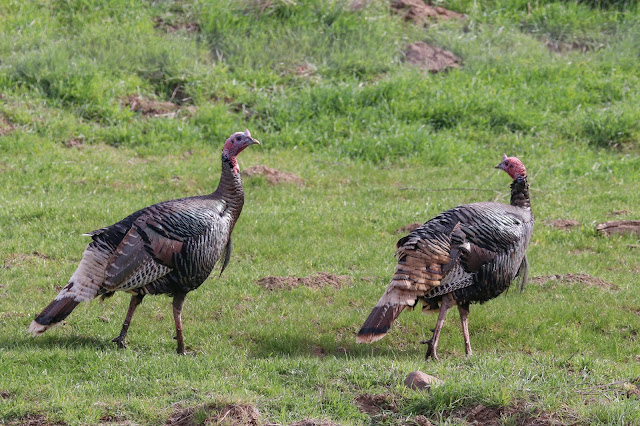 The Moro sewage ponds held only Mallards but I'm 99% sure I had a hummingbird along the entrance road. Any variety of hummingbird in this area is a good bird but it zoomed away when I slammed on the brakes. Further south I did a quick drive through the IOOF Cemetery. 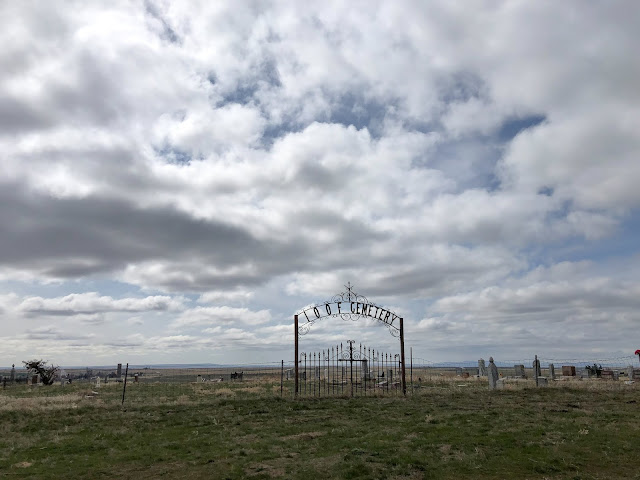 I had no idea that IOOF stood for Independent Order of Odd Fellows.  The cemetery was not very birdy but a Western Meadowlark was singing on the ground. 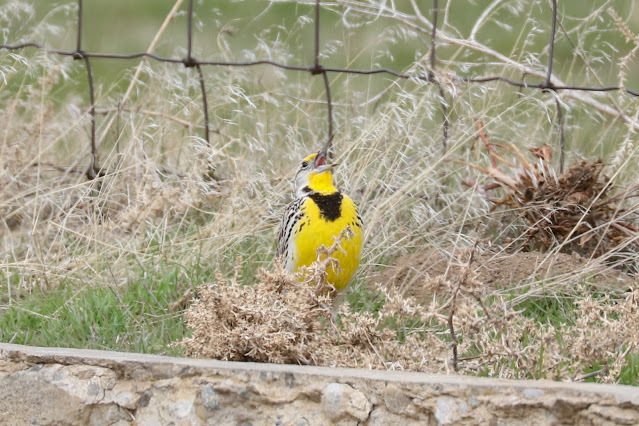 I continued south past Grass Valley to the ponds between Rutledge and Barnett Roads.  A single Redhead was probably the best bird here. 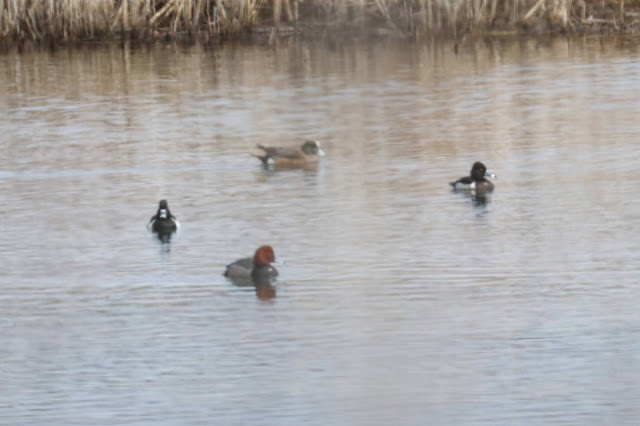 From there I went back up to Grass Valley and onto 216 to stop at the big pond on Twin Lakes Road and eat lunch. 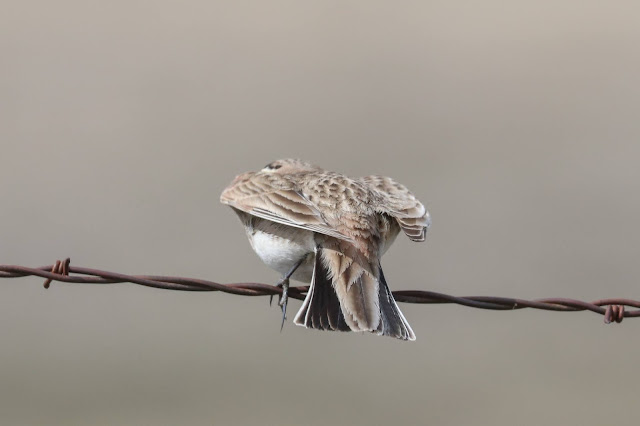 Horned Lark before taking off

Near the pond a Mountain Bluebird was hanging out on the powerlines, another new Sherman bird for me. 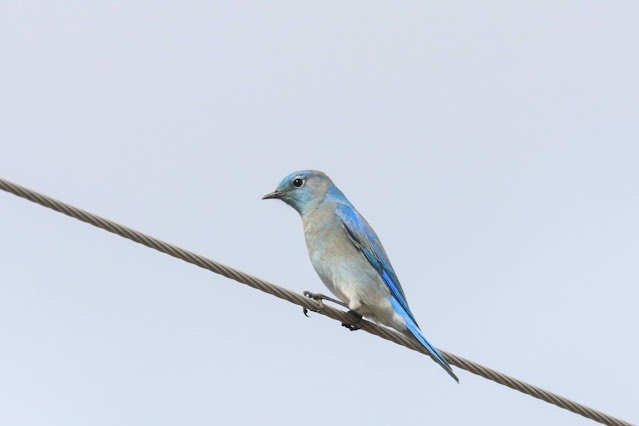 I tried to count ducks in the pond but it's far from the road and the heat waves were killer. Instead I watched the bluebird hunt and noticed these buttercups: 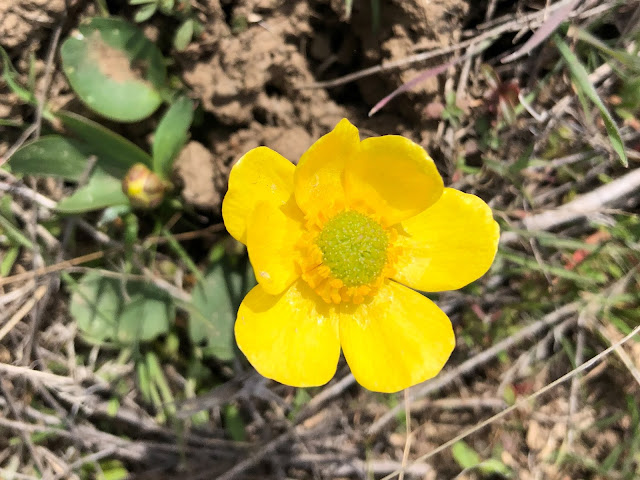 Towards the end of the road I found a Northern Shrike hunting around the sagebrush. 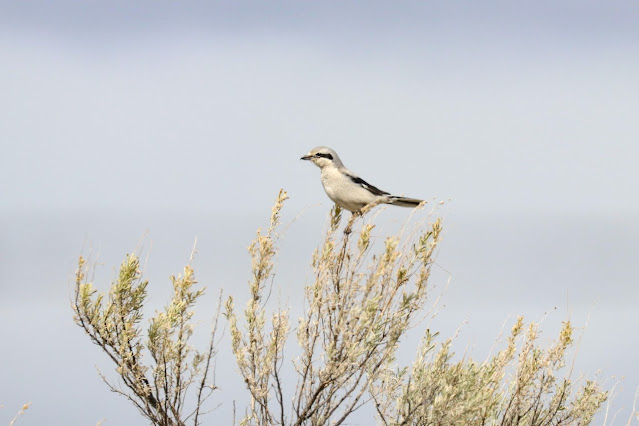 I drove around a bit more after that before heading home.  It was the perfect change of scenery I had wanted for the day with three county birds too.

Now, has anyone else read this book? 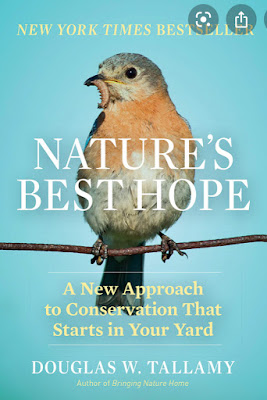 I was enjoying it until I got to a section where the author visited Portland. 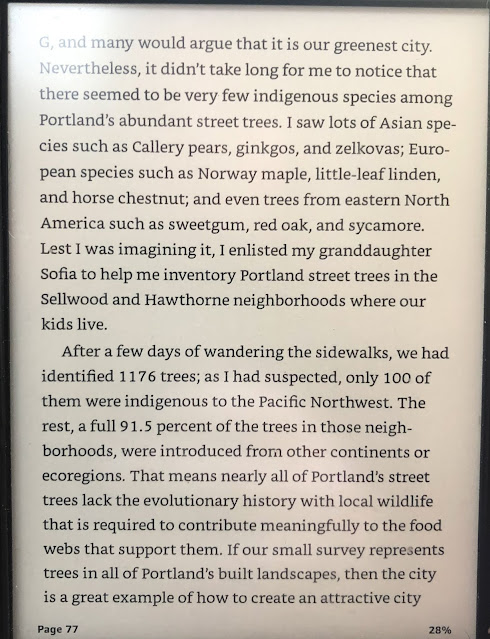 Ok, yes I'm sure many of Portland's street trees are not native. But to say there are very few breeding birds, butterflies, bees, or other desirable wildlife? I call bullshit.  It gets worse. 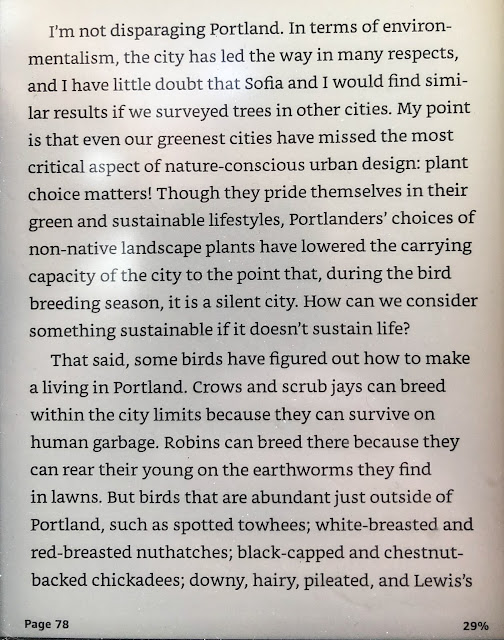 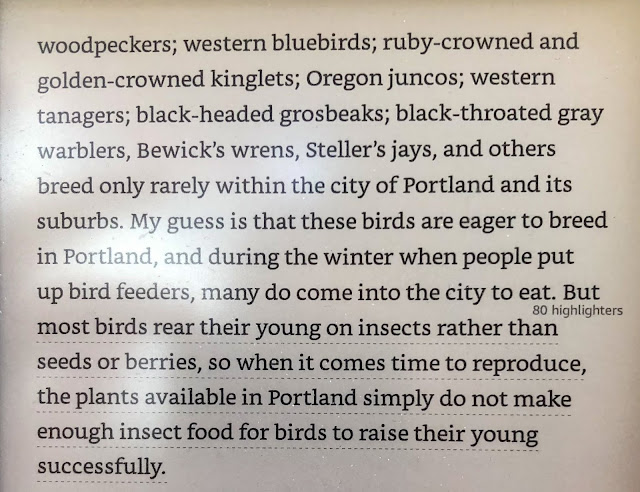 This section has pissed me off so much that I have little interest in finishing the book.  Portland has its issues but there are SHIT TONS of breeding birds in the city limits, let alone in the suburbs.  To call it a silent city during breeding season is just the weirdest lie I have ever read. My trust in this author has pretty much dissolved which is unfortunate because I do like a lot of his ideas.

There are plenty of other things to be angry about these days, we don't need bird lies on top of all that.