Moths are the new birds

It turns out this is the summer I became obsessed with moths. I'm not sure what exactly lit this fire but I found myself googling moth lights in early June and now here we are with an entire blog post about moths.  Here are the basics that I have learned in the last few weeks about finding moths, photographing moths, and identifying moths.

Attracting moths to your yard is the easiest way to find moths. I used to keep the light on by my back door in Portland at night when I lived alone and I loved letting the dogs out in the morning and checking what had shown up. It was pretty much a low budget moth/insect light. This year I upgraded to a "real" moth set-up in our Lincoln City yard: 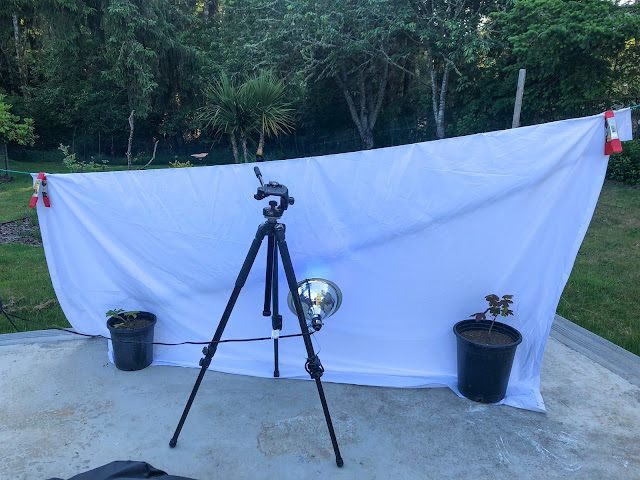 This awesome old Canadian moth blog offers great suggestions about setting up a moth sheet. The key ingredients are a white cotton sheet and a blacklight.  Using a clamp light on a tripod works great and note the moth blog author mentions "if you hang a blacklight upside down it burns out within a few minutes." So I've been pointing mine sideways. 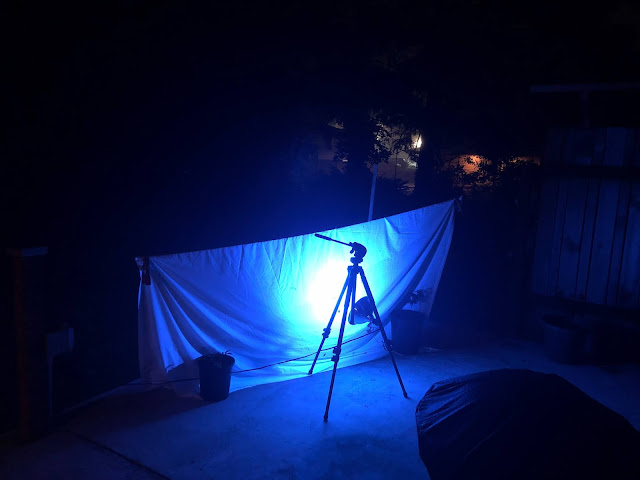 Having the sheet open on both sides allows the light to travel farther and attract more moths and other insects. When I've used this setup I've had decent success with moth variety plus cool other insects. Other methods I've tried include:

-hanging the white sheet on our fence (a few moths, not as productive as out in the open)

-shining the blacklight directly on the fence (least productive)

I also recently set up the sheet in our Vancouver, WA yard which is surrounded by new construction and very little wildlife habitat: 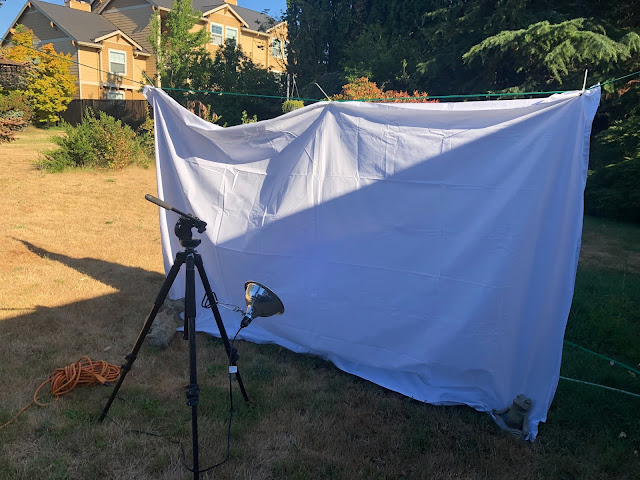 I only found three tiny moths in the morning. Location matters! Not all yards are going to attract tons of moths right off the bat but the blog I mentioned above has other suggestions you could try also including making a moth trap or using a "syrupy 'goop' that is spread on trees or logs to draw in nectar-feeders that may have limited interest in the light (not all species of moths are attracted to light). Most moths don’t eat as adults, but there are a few that sup on flower nectar or tree sap, and this is the group that the goop will appeal to."

If yard mothing doesn't work for you then I highly recommend finding somewhere that keeps their lights on all night. A fellow Vancouver birder, Jim J, who is great at mothing uploaded some cool moths to iNaturalist last week from the Sunset Highway rest area. Our Lincoln City house is only about 10 miles from the Highway 18 rest areas so I asked Jacob if we could check it out. Gold mine! 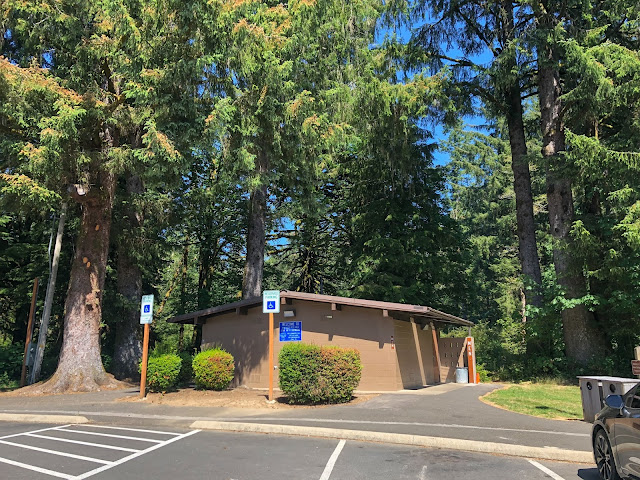 There were tons of moths around the restrooms but also on the shady side of light poles and the shady side of an informational sign.  There are restrooms on each side of 18 and both sides had tons to look at. But not all rest areas are the same. While in Vancouver I drove up to the Gee Creek rest areas on I-5 and could not find a single moth. 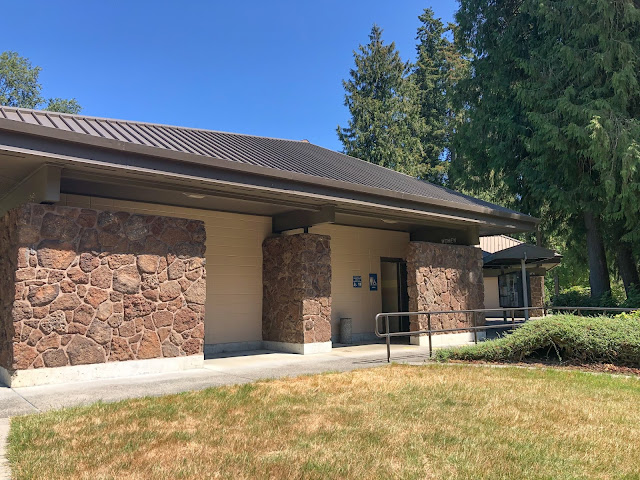 Yesterday I took Ralph on a drive out to the Ellmaker rest area on Highway 20 which is just one small building with four lights. Another gold mine! 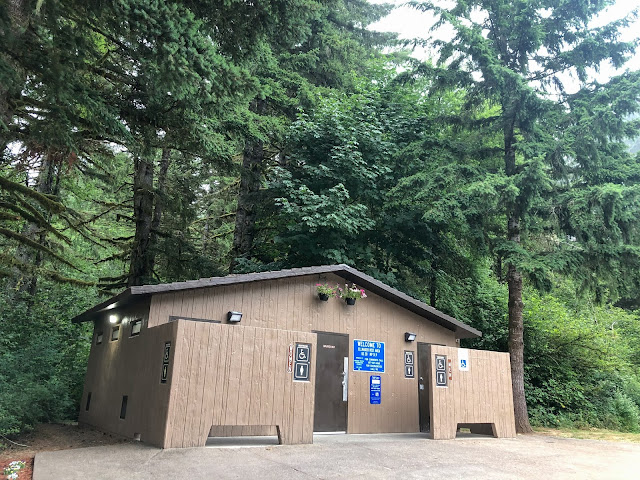 One thing I've learned about visiting rest areas is that having Ralph with me makes me less creepy to other visitors, as well as saying hello and pointing out the cool moths. 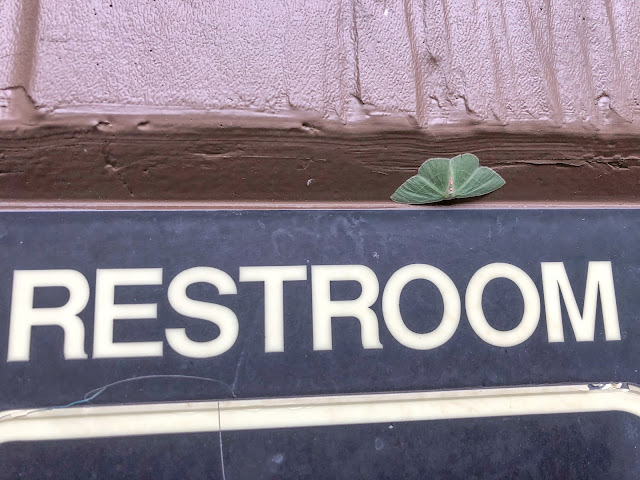 ODOT offers a map of all the rest areas in Oregon here so I have more to check out for sure. 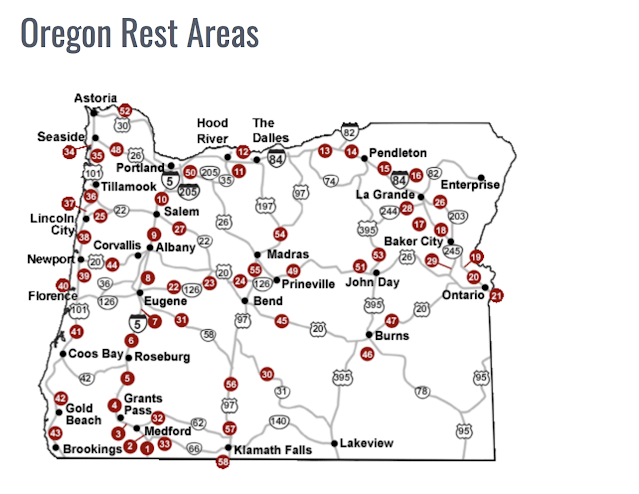 On my way home I noticed that the outside lights were on at the Boiler Bay restrooms but my brief check didn't turn up much. The doors were open though so maybe inside would be better? I will check soon! 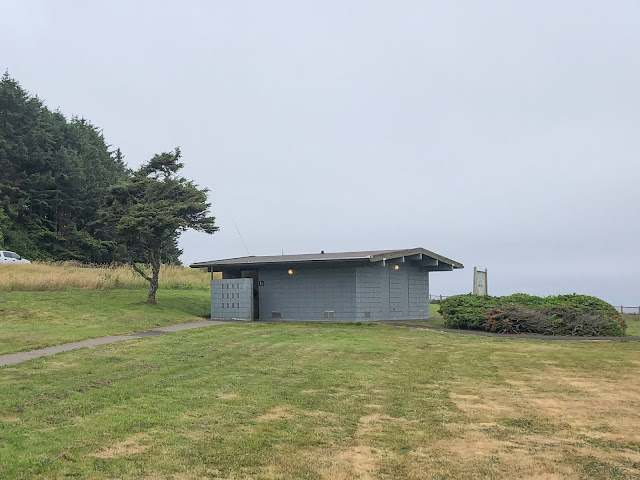 Another way to find moths is to walk around outside and look for them.  In the yard I found this omnivorous looper sitting on a shady daisy in the afternoon: 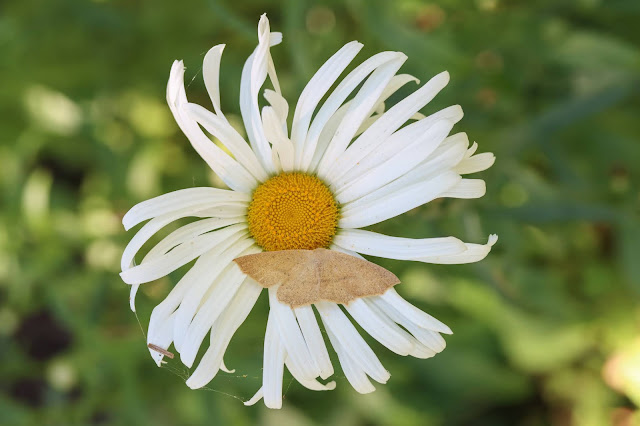 If you have any other ideas for finding moths please share!

When I first started playing with my macro lens (a Canon 60mm macro) 6 or 7 years ago I had fun taking artsy photos of insects with only their eyes in focus or something. Now my main goal is identifying the subject so usually I have the f-stop around 10 or 11 and use my flash. 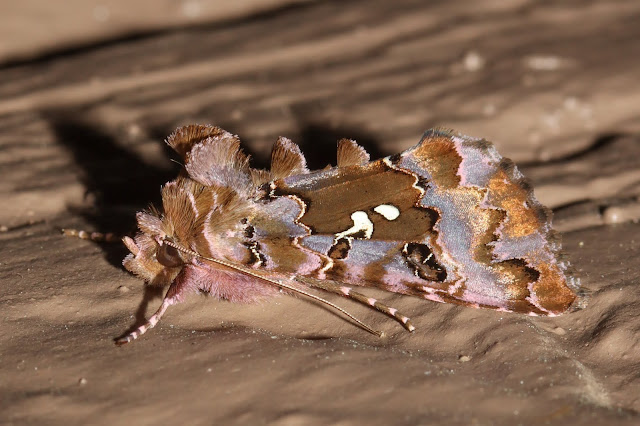 This moth looked cool on its own but the flash really brought out the pink!

Here's a Canary Thorn, Neoterpes trianguliferata, from the Van Duzer rest area on 18. It was up in the dark eaves and required my 400mm lens, still using flash. 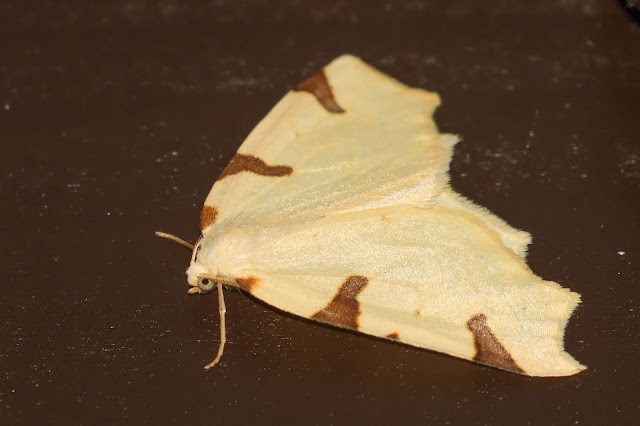 I would have liked a straight on shot of the back but moths don't always hang out in convenient locations.

If you don't have a camera a cell phone can work as well for identifying moths. Ralph dragged me over to a stump at Van Duzer and I found this Isabella tiger moth hiding out in it: 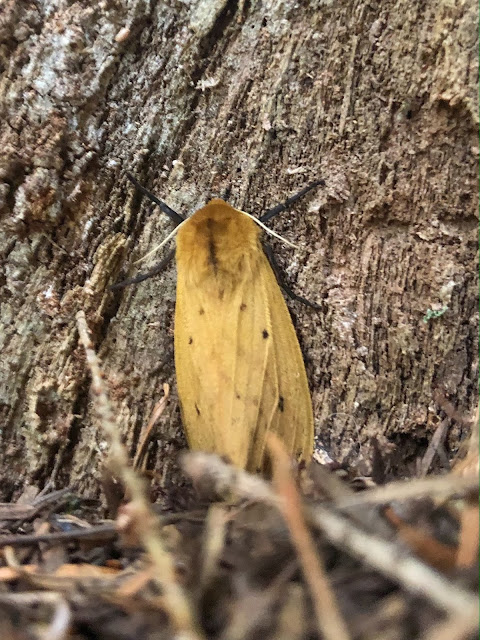 This cell phone photo was sufficient for identifying it. Same goes for this dead Polyphemus moth: 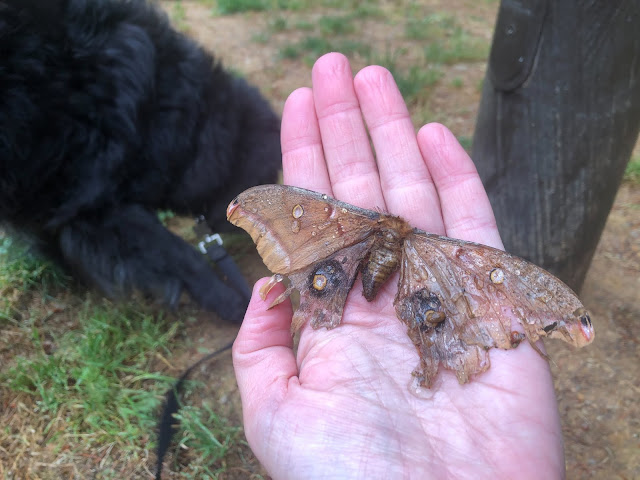 I currently rely heavily on iNaturalist and BugGuide for help from others on ID but I'm hoping over time I will learn more on my own. The moth blog I mentioned earlier offers good advice here about getting started with learning the moths.  They suggest, as anyone would suggest with birds, starting with learning the common moths. Don't try to learn everything your first year because it will be frustrating and you'll get burned out. 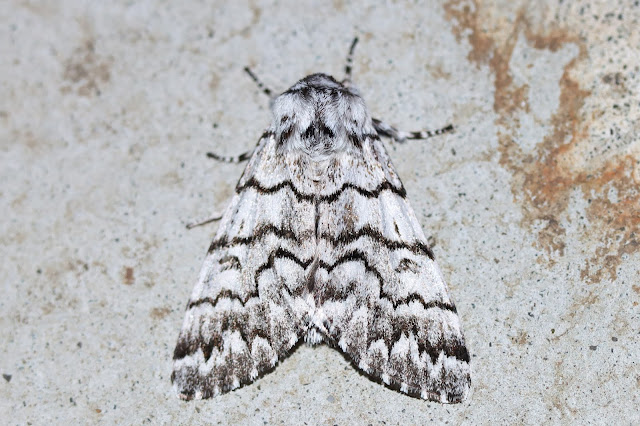 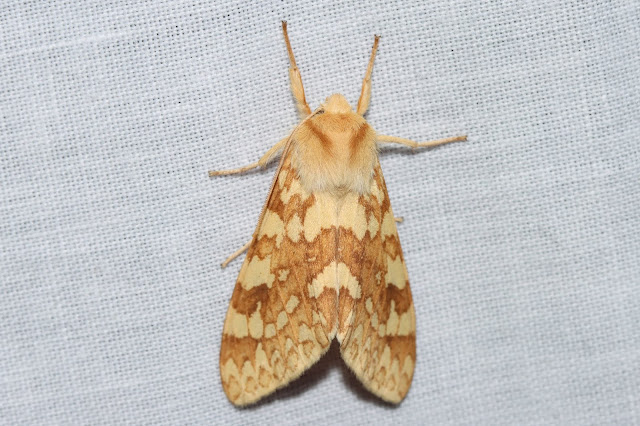 Spotted Tussock Moth (Lophocampa maculata) has only come to my moth sheet once, but is very common at the local rest area 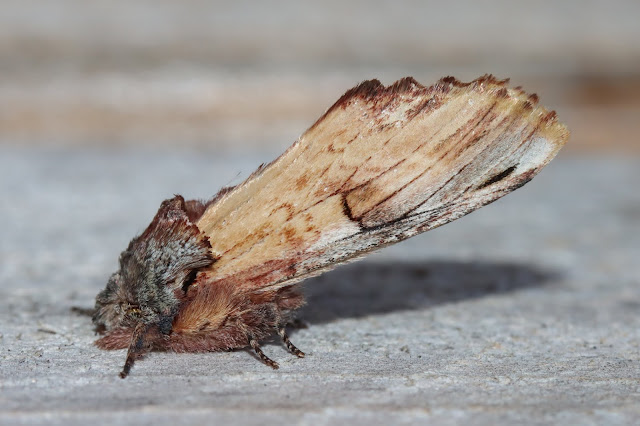 While learning the common moths you might start being able to categorize what you see into families or other groups of moths. For me so far these groupings include cool fuzzy moths, tiny moths, the moths the lawnmower stirs up, moths that iNaturalist will suggest to be carpet moths, and so on. I have a lot to learn but hopefully eventually I will have a better idea of where to start with each moth to reach an ID.

The moth blog also suggests that after learning the common moths to start focusing on the more unusual species like you might with birds. 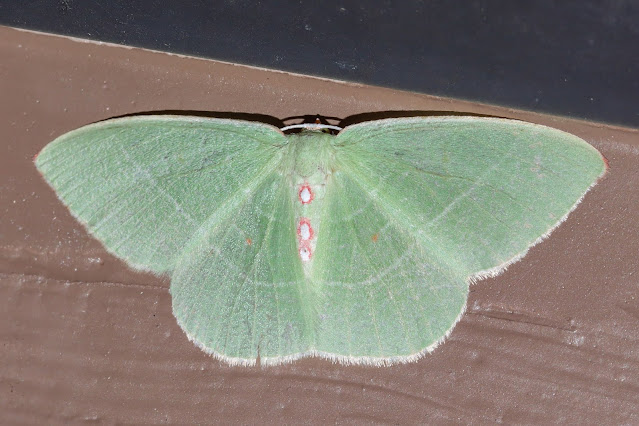 Keep in mind that only species with 100+ research grade submissions are used to train the AI. This heavily biases the suggestions with the most frequently reported and most easily identified species.

He said he often relies on a couple different websites like PNW Moths and Moth Photographers Group for identification.  I have found these sites a bit challenging to navigate as a novice but I'm trying to figure them out. In the photographers group (aka MPG) I did a search for "Nemoria" as I am confident that's the right genus for the green moth above. I came to this page with a bunch of similar green moths.

I clicked on each of the similar ones and was able to see many were unlikely based on range, and am left with the original suggestion of Columbian Emerald as the best fit. 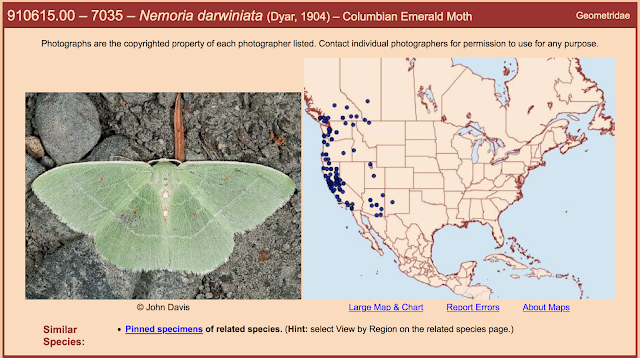 I could have started with this page and clicked on the Similar Species link, then specified "Oregon" as the region. That would probably have been smarter but I'm still learning this site.

Now let's go back to that issue with iNaturalist basing their AI suggestions on species with over 100 research grade submissions. That first moth I shared, Autographa corusca only has 70 observations so iNat would never have suggested it. 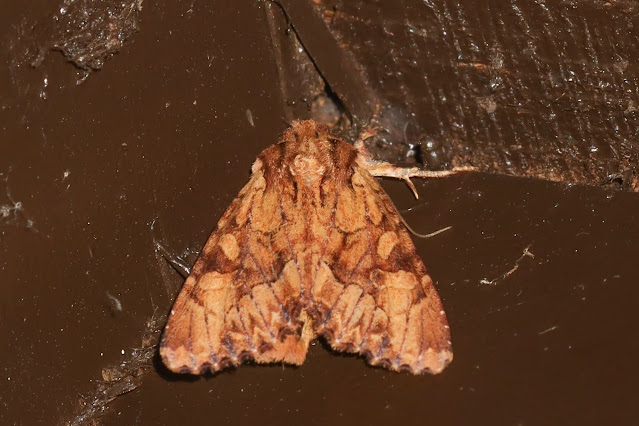 Jim J identified it as Apamea atriclava. The iNaturalist stats for this species:

One observation which is my own. Pretty cool.

With 160,000 species of moths in the world (nearly 11k in the U.S. alone) it's a bit overwhelming but I plan to keep chugging along, learning what I can as I go.

"What began as a plan for a statewide moth night evolved into a national week and quickly became an international citizen science project that invited organizations and individuals to register their events for free. Participants were encouraged to post photos and observations on partner websites dedicated to moth and wildlife identification and study."

I registered my yard for a "private event" and now I'm probably going to have to buy a t-shirt or sticker too because they're pretty cool.

Hope you're feeling inspired to find some moths now! 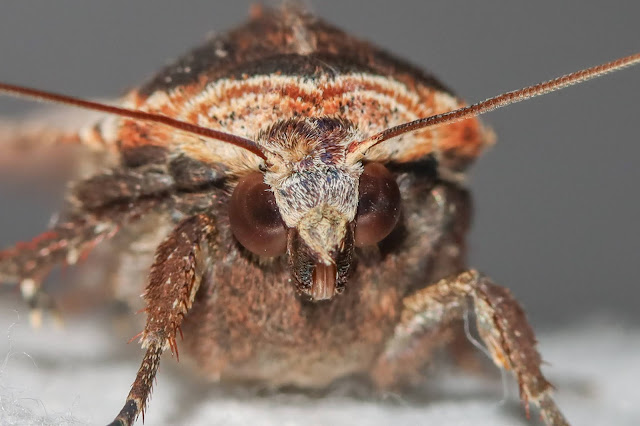