November in the 5MR

It's been six years since I first posted about this 5MR idea of mine. It's in the same post where I was reacting to the 2016 presidential election. It's really been a long six years.

Anyway. This November I thought it would be motivating to try to beat my old best November 5MR totals in both my 5MR's. In case you're new, yes I have two 5MR's for now as my time is split half and half between Vancouver, WA and Lincoln City, OR. Birding around LC is more fun for me so I'll focus this post on that 5MR. My previous best November total in LC was 92 species.

I got started with a trip to the sewage ponds where another local birder, Phil, had reported a Swamp Sparrow a few days before. Unexpectedly (to me) it was still there! 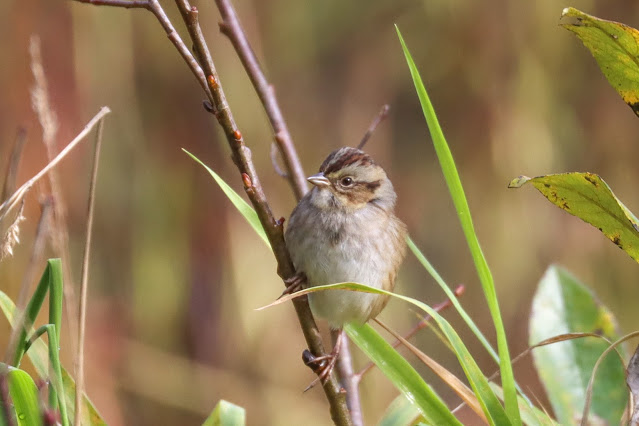 Oh and who's that hiding behind a dang Killdeer? Hello, Western Meadowlark! 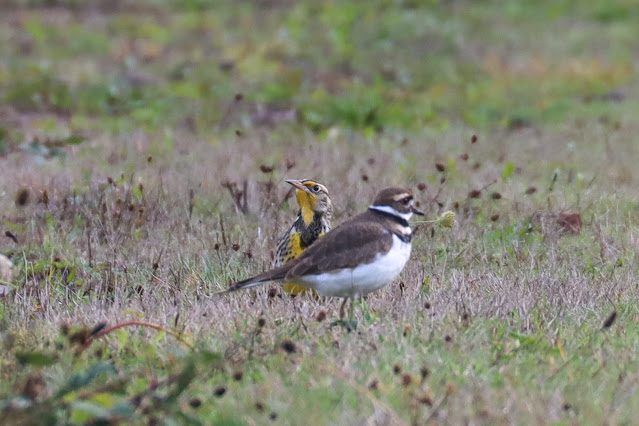 Later it flew up to pile of dirt with a woolly bear in its bill. 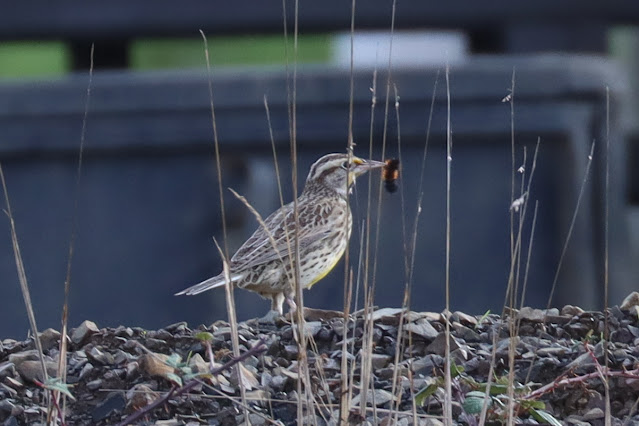 Rock Creek Marsh, near East Devils Lake State Park, has been a known spot for Soras in the winter. Known to other people mostly. Jacob and I had dipped on them many times. But I stopped by on my way home from the sewage ponds and oh yay, a Sora called immediately! A new 5MR/county bird!

The north end of my 5MR has the Salmon River Estuary which is an awesome area for birding. There's a ton of great habitat with the potential for almost anything to show up. 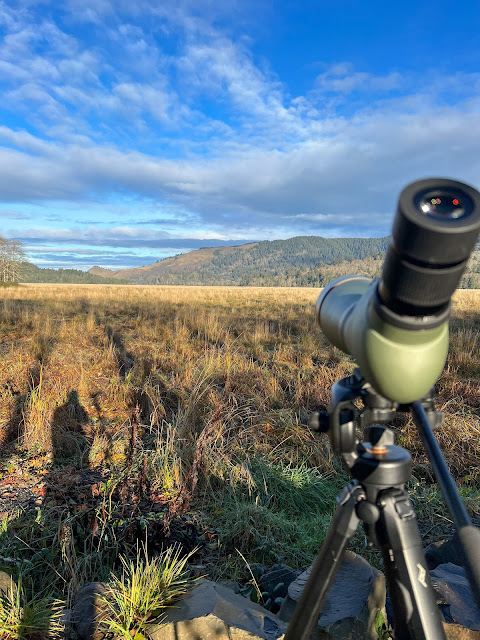 On this day I picked up Sharp-shinned Hawk, Common Loon, and American Pipit. 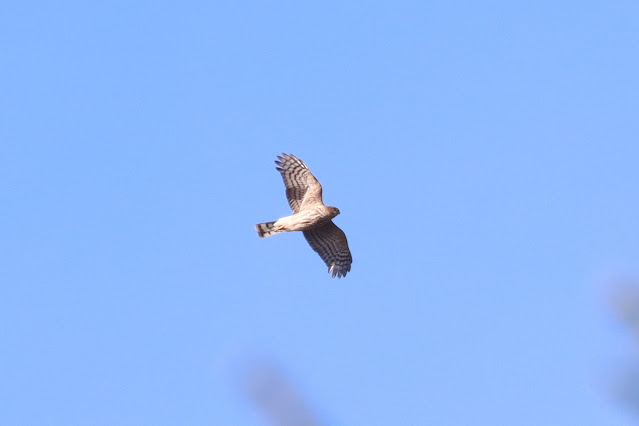 The next day I was ready to hit the beach, specifically the Lincoln City 15th Street rocks. Surfbird was my 90th species for the month here, and a Tesla was my first car-stuck-in-sand of the month. 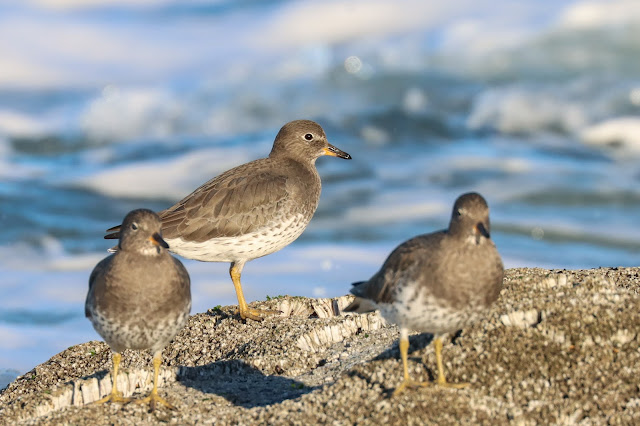 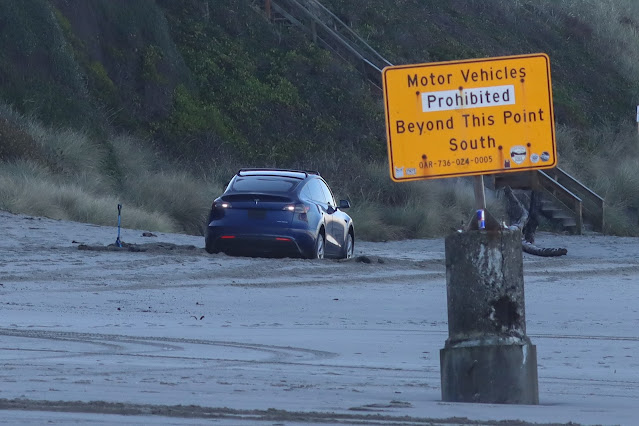 From there I headed south to Siletz Bay where I added Marbled Godwit, Spotted Sandpiper, and Herring Gull, officially beating my previous November best.

Back at home that afternoon Jacob and I were getting ready to have a drink. Then I looked at my phone. Local birder Phil had found a golden-plover at 15th Street where I had just birded that morning. Jacob told me to go and he would watch Mouse (Mouse is the puppy, I haven't introduced her here yet). At the time Phil had only just spotted it and was assuming it was a Pacific.

When I arrived I learned Phil was now considering it a possible American which would be a lifer for Jacob. So I texted Jacob who abandoned the puppy (I mean crated her and put on the classical station) and came down to meet us. 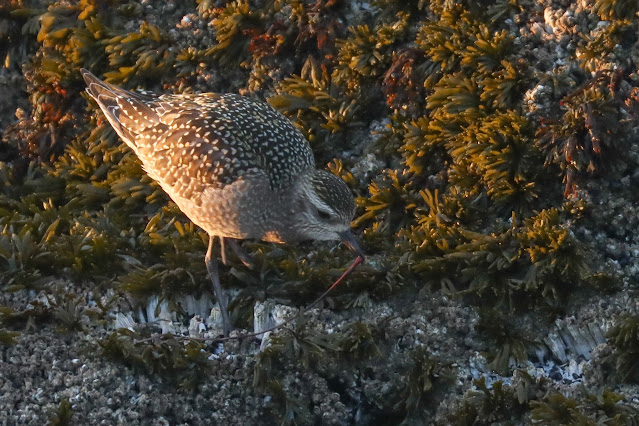 We enjoyed great views of the plover with an awesome sunset to make it even sweeter.

The next time I was in Lincoln City I headed to a clearcut off Schooner Creek Road that had some birds I needed for the month. I quickly found a flock of Western Bluebirds (#103) and soon after the Northern Shrike Phil had reported the week before! Another new county/5MR bird! 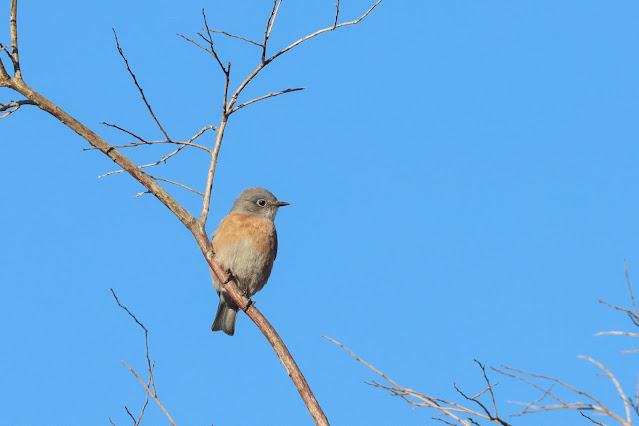 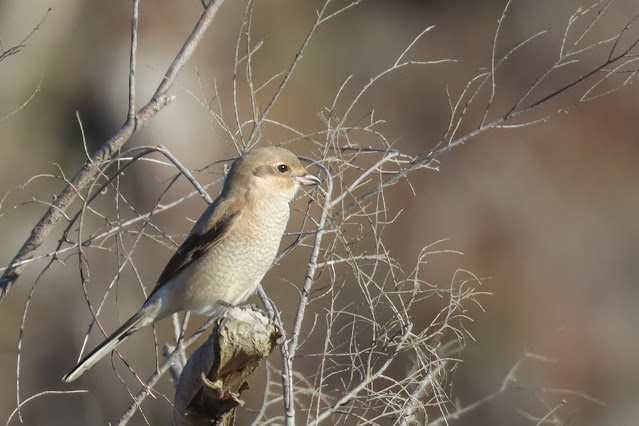 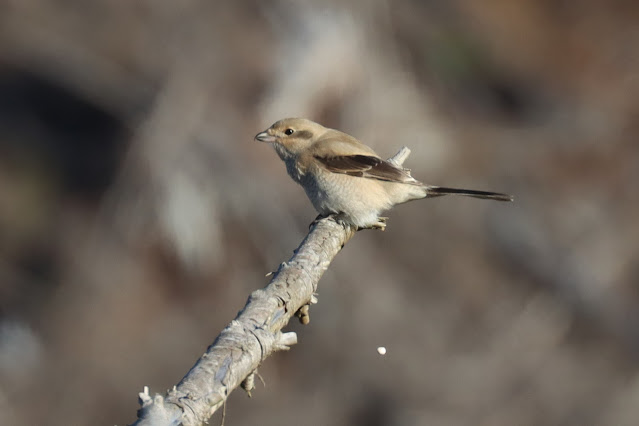 I kept walking up the logging road when I noticed an animal pop out of the salal. A bobcat! It quickly disappeared then popped out again. I dropped my phone as I tried to raise my camera in time but no luck. It was gone. It was so cool I didn't even mind that I dipped on ridiculously reliable Wrentits.

Over the weekend our friend Sarah was in town to talk to the Lincoln City Audubon Society about her new book, Best Little Book of Birds: The Oregon Coast. It's a great little book and even has some of my photos in it :)

While she was in town she hoped to see the American Golden-Plover which had amazingly stuck around. Jacob and I met her at 15th Street but the bird was not on the rocks. We walked south to D River and it was not with the gulls. Finally we walked north and it was wandering around in the sand, probably trying to avoid the chaos of tourists at low tide. 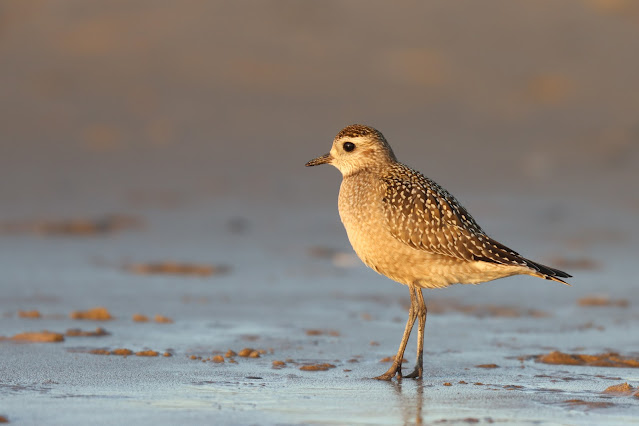 The next day Jacob and I decided to scope the ocean in hopes of finding Ancient Murrelets. Not a rare bird, but one I had never tried that hard to find in our 5MR. This was the ideal time of year and we had over 10 loafing about on the water.

In the late afternoon we headed to the Salmon River Estuary to see if we could find any owls at dusk. Amazingly it didn't take long for me to spot a Short-eared perched on a very distant log. Eventually it flew and a second one appeared. 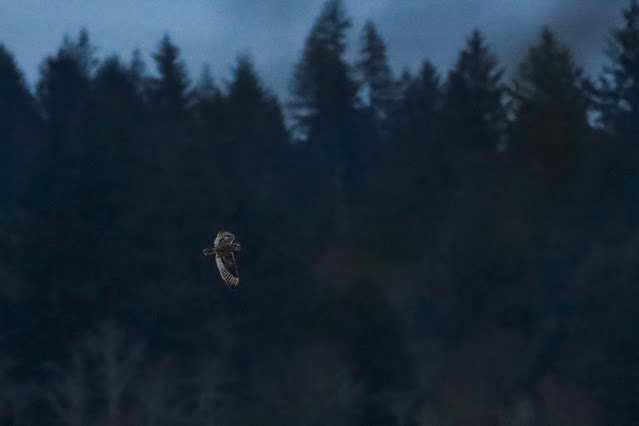 This was the only owl species I had in November. That week I hit up Josephine Young Park on Siletz Bay and spotted a Long-tailed Duck, a bird I had only seen once before in my 5MR. 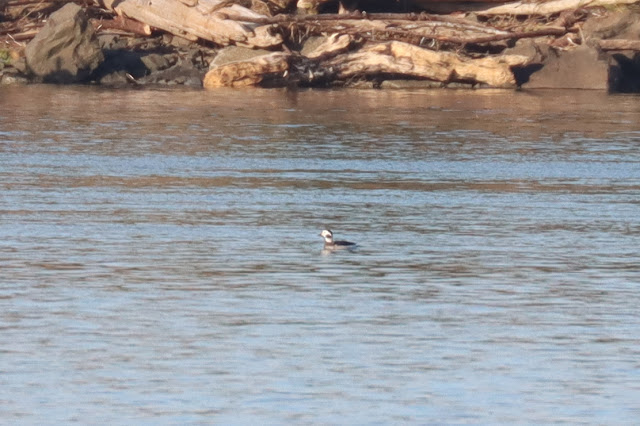 Another trip out to the Salmon River Estuary yielded a Red-breasted Sapsucker and a Bonaparte's Gull, but the Roosevelt elk were far more accommodating of photos. 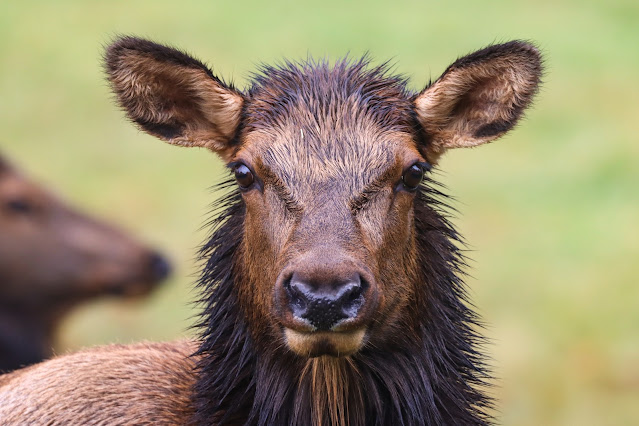 I also had a SECOND Long-tailed Duck! Again, not the best views but a very nice 5MR bird. 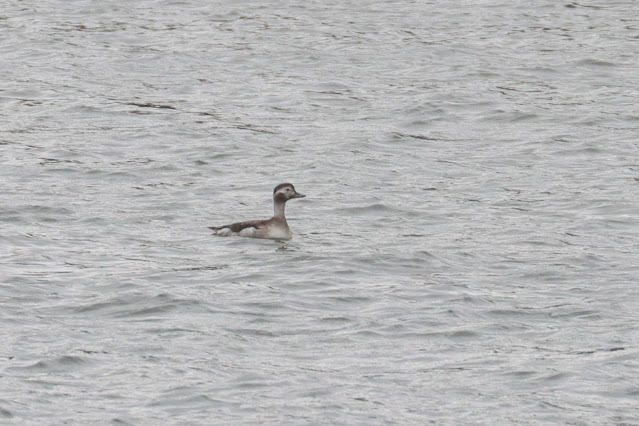 When Jacob got off work we headed back there and we failed to find another Long-tailed but I did get American Kestrel (finally #115) and Greater Yellowlegs (#116).

It was a very cool sunset that evening, very 70's rock album cover 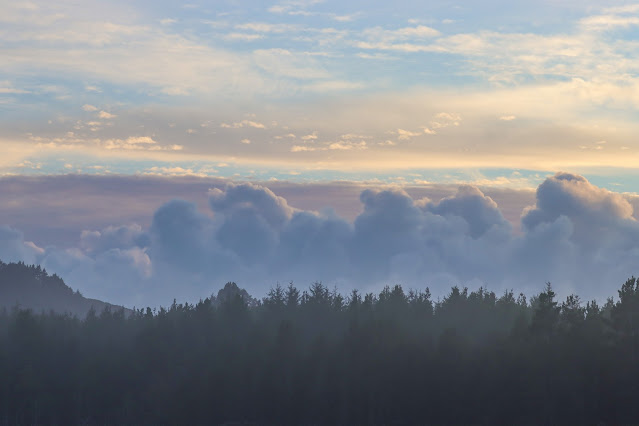 The next day I finally snagged a Wrentit at the previously mentioned clearcut leaving me at a solid 117. I thought that was going to be it for me as I headed back to Vancouver for Thanksgiving. Then the forecast this week suggested snow in the valley today so I decided to return a day early: the last day of November.

Not long after I decided this Dawn Villaescusa posted that she had spotted a White-tailed Kite at the Salmon River Estuary. This was a bird I had tried to find so many times at this exact location. When I rolled into town I headed straight there and spotted it flying around. 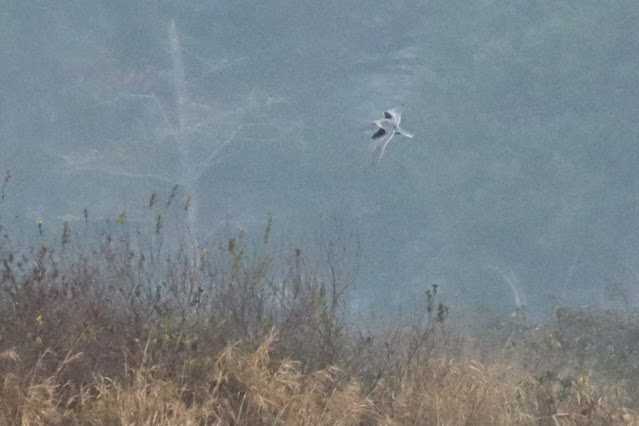 White-tailed Kite was #118 not to mention another county and 5MR bird! I watched it for a bit until a hail storm pushed through and it posted up in a distant tree. A rainbow was a nice way to end my month. 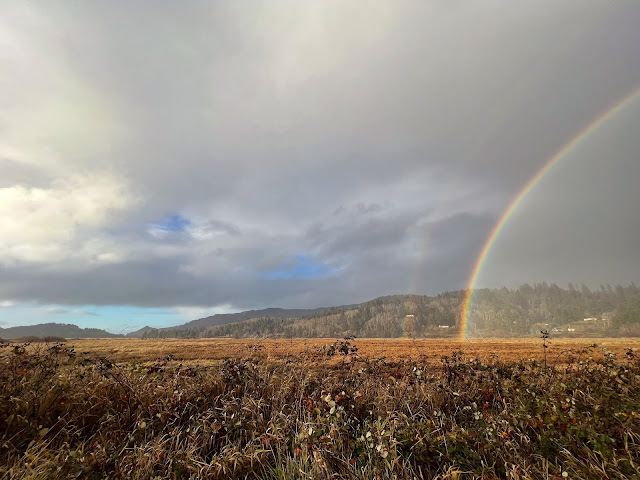 So to sum up my month... My previous best 5MR total for November was 92.  This month I had:

3 of which were county birds

On a side note, I also crushed my old Vancouver 5MR November high count (73) and came in at 86 species. I could have had more and tried harder there but chose not to.

It was a really fun month of birding and I did better than expected! Good times!