After a rough night of camping my brother and nephew and I started making the rounds of the park.  We began the day back at Oxbow Bend. 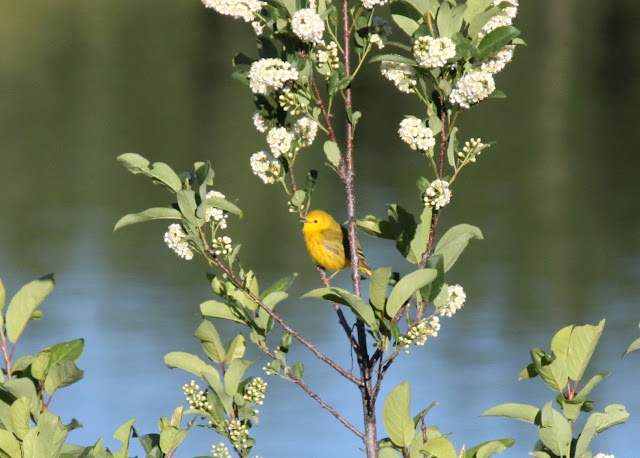 This pretty little Yellow Warbler was singing from the flowers...

The Jackson Lake Dam was a fun place to explore... 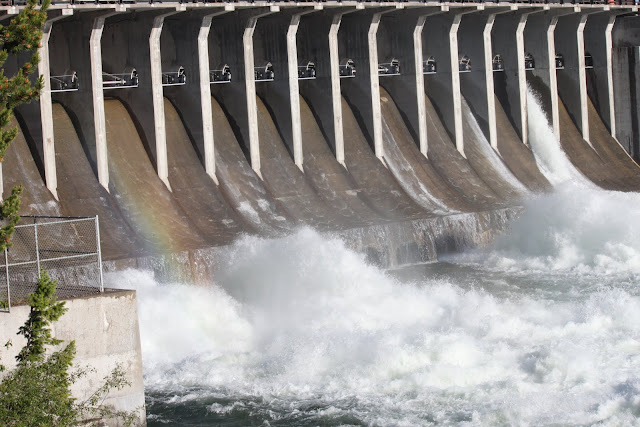 The pelicans liked it too. 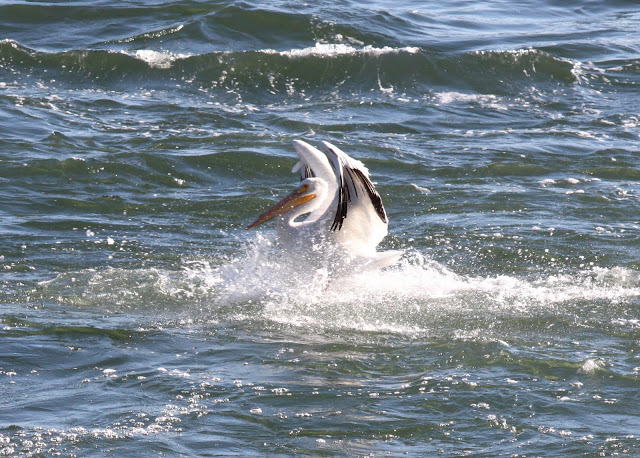 The wooded area around the dam was pretty lively with birds: 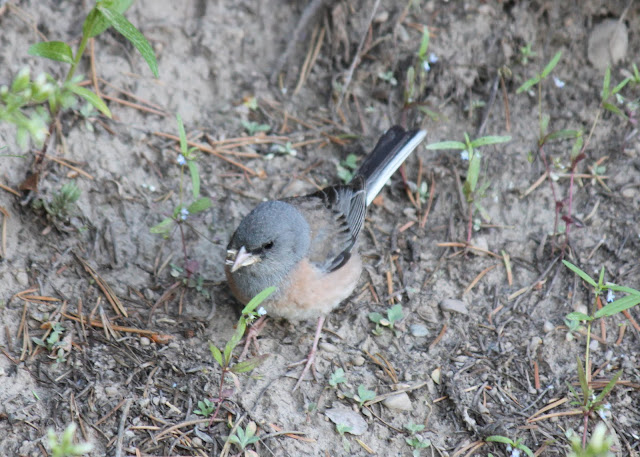 Some Dark-eyed Juncos were gathering stuff in their beaks... I'm still scratching my head over this sign: 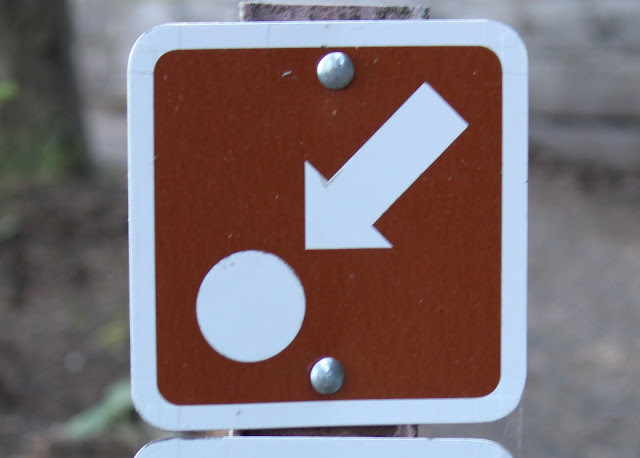 Further down the road I watched a pair of Chipping Sparrows... 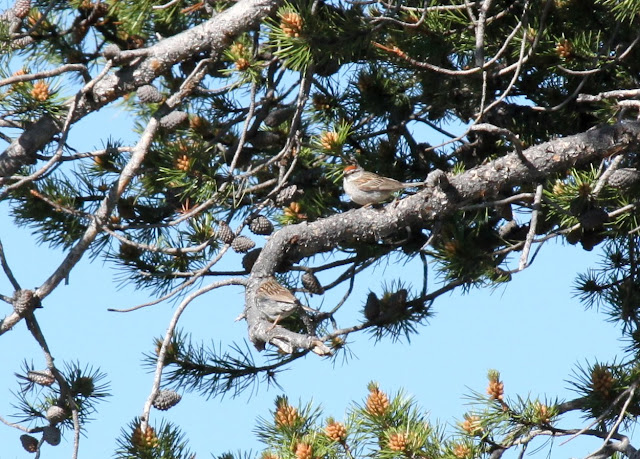 Back at Moose Junction we saw more people watching a pair of moose!  We crept up a trail to catch a better view.  Even after getting pretty close they were still hard to photograph: 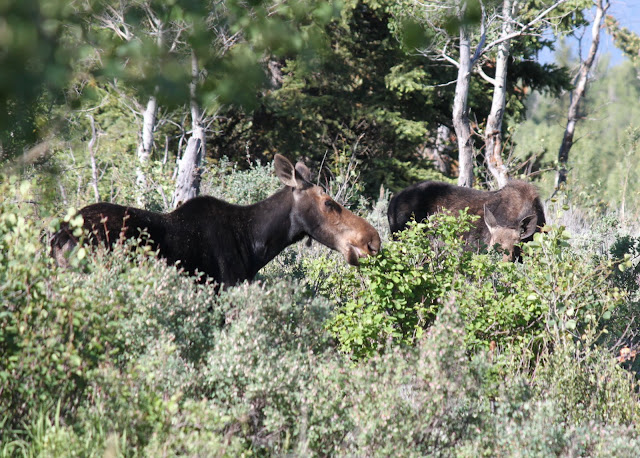 I got distracted by a bird on a tree making a lot of noise... I didn't realize what it was until later when I was flipping through a bird book in a gift shop.. 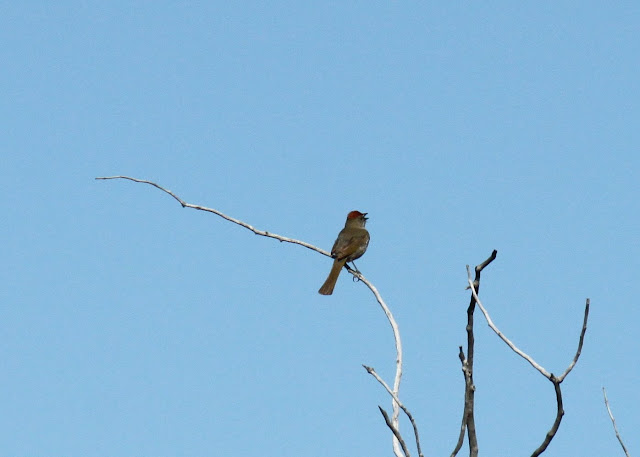 It's a Green-tailed Towhee!  Another first. 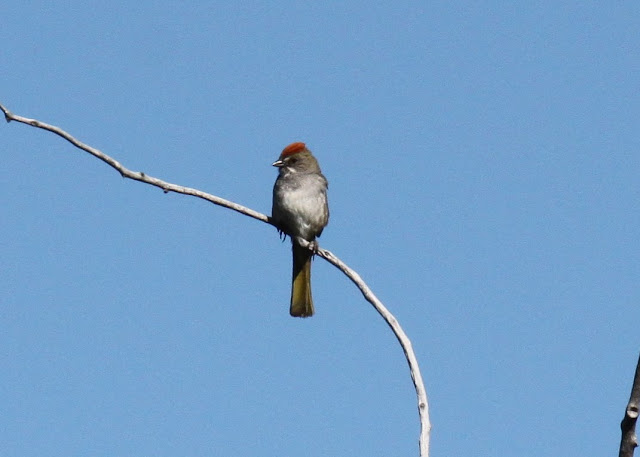 We returned back down the trail towards the car and realized all we had been doing was blocking the path the moose wanted to take down to the river... Back at the road the moose walked across a field in clear view! 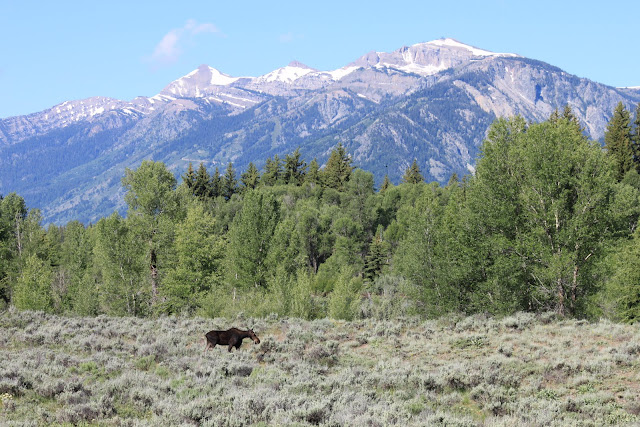 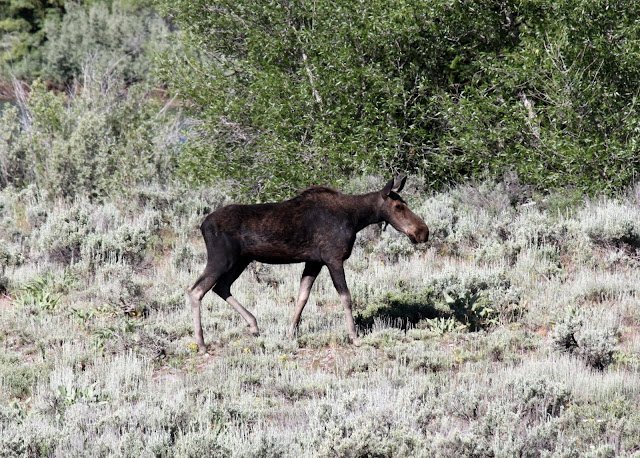 We decided to take a hike to... uh... somewhere I can't remember!  I think it was along the Taggart Lake trail. 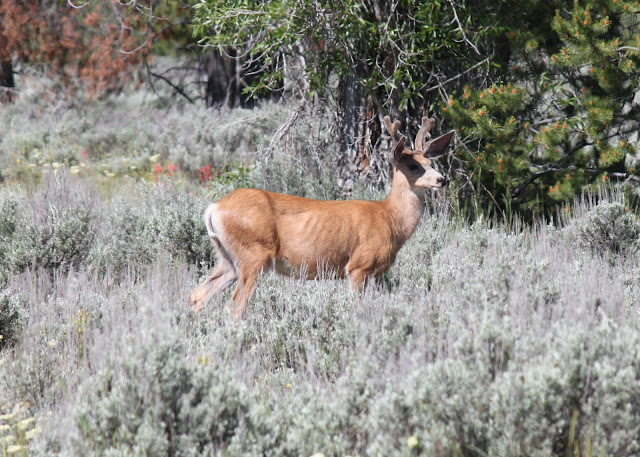 Some deer crossed our path right away.  Judging by the little tail on the female I am thinking they are mule deer. 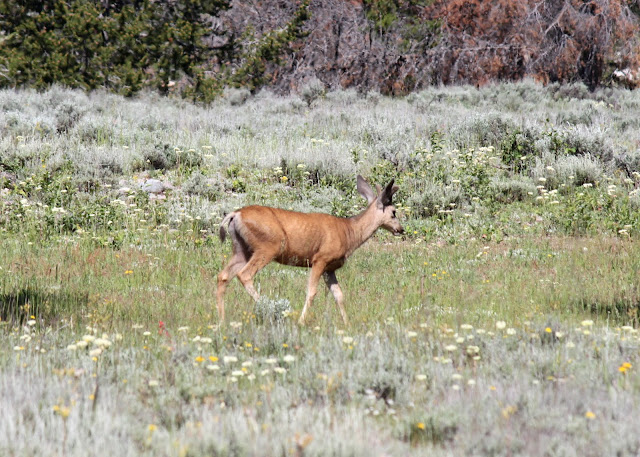 After a mile or so on the trail I heard my brother say "Oh my god."  Up ahead a moose mama and her baby were crossing the trail to head down to a creek.  We crept closer to the creek for some decent views. 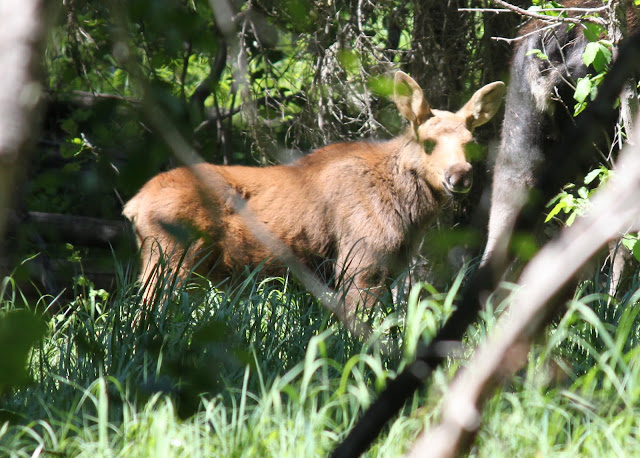 So cute!!  After getting a drink the mom decided to chow down on some leaves while the baby kept its eye on us. 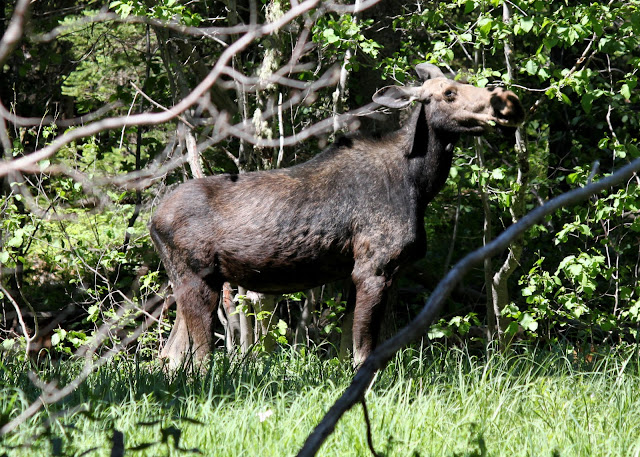 Back on the trail my brother spotted this tanager: 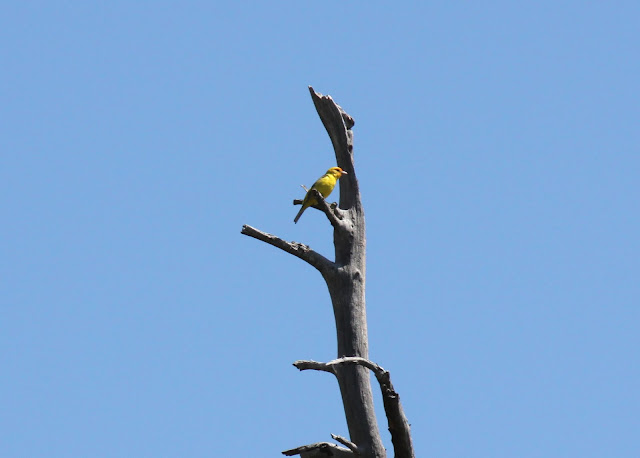 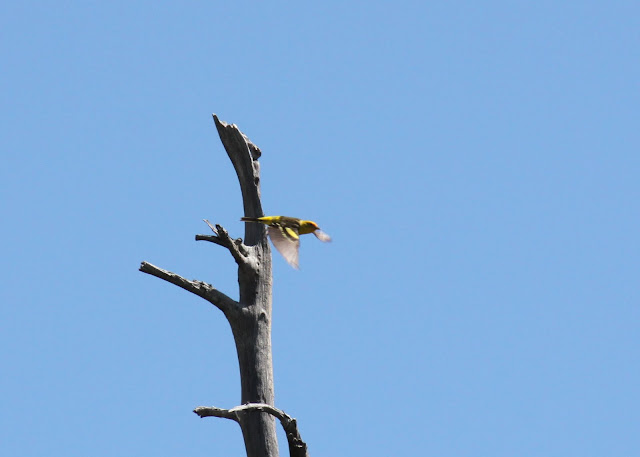 We stopped for lunch at the Jenny Lake Lodge and then let my 6-year-old nephew lead us on our next hike to Hidden Falls.  We quickly spotted an osprey nest. 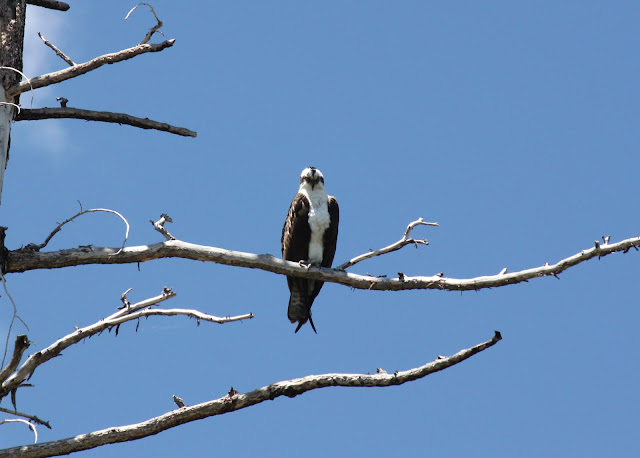 There tons of chipmunks and ground squirrels running around.. 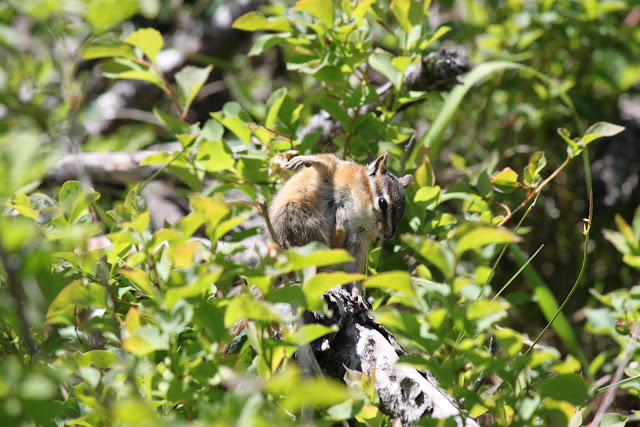 When we eventually reached a little bridge over a creek we spotted this animal: 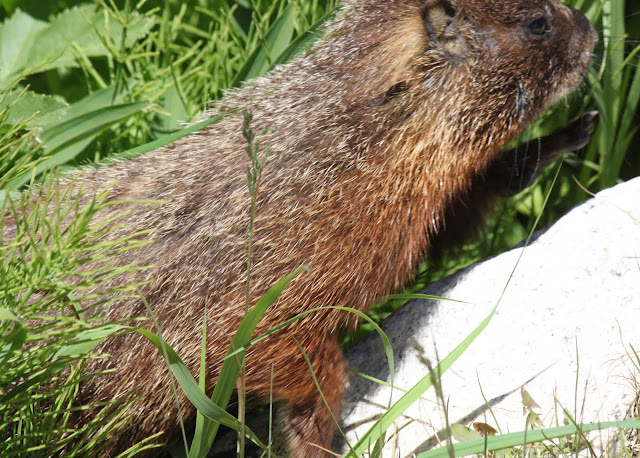 He was so fast and I was so not prepared to take his picture (zoom lens at about 10 feet away)  that this was all I got before he disappeared into a crevice.  I believe it's a yellow-bellied marmot.  My first marmot!

We finally reached the falls.. 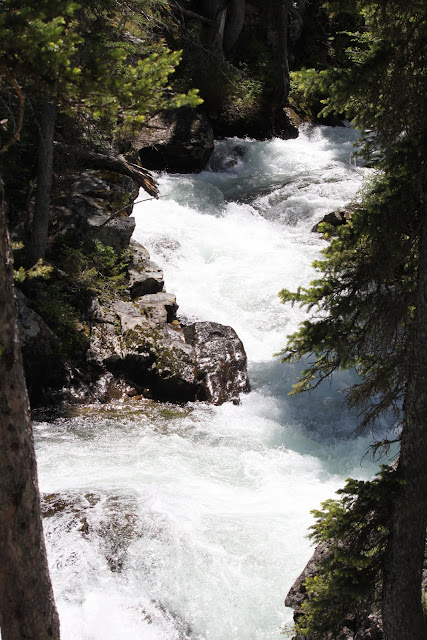 It was very scenic, of course. 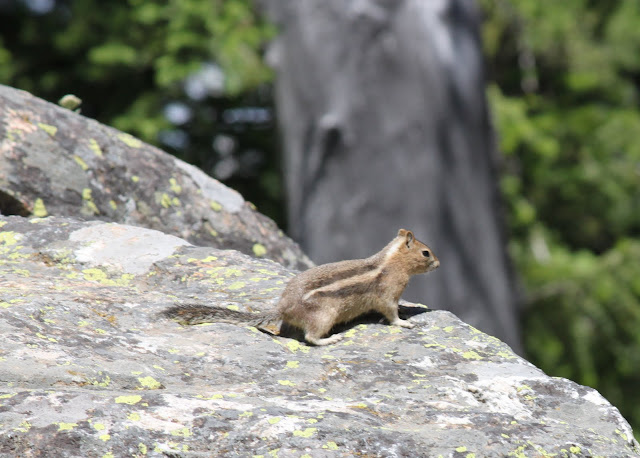 We decided to take the ferry boat back across the lake, dropping us off still a few miles from the car.  At least on the other side of the lake was a store to pick up some water and snacks.  Also this junco: 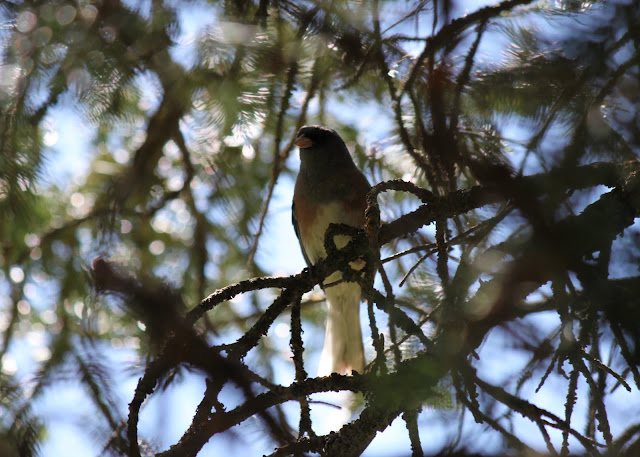 On the trail back was this Hairy Woodpecker: 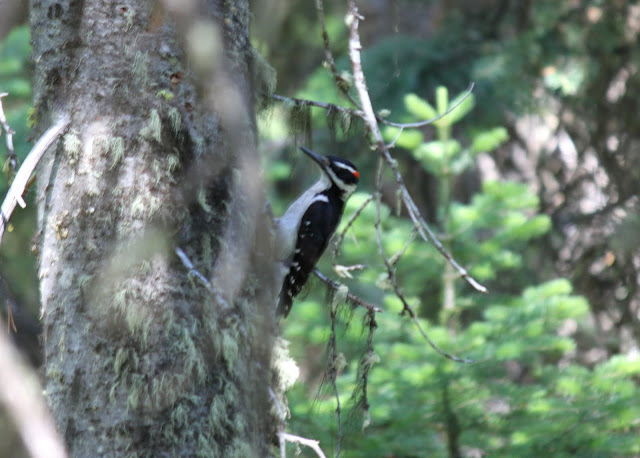 Further along the trail was this merganser sunning herself on a rock: 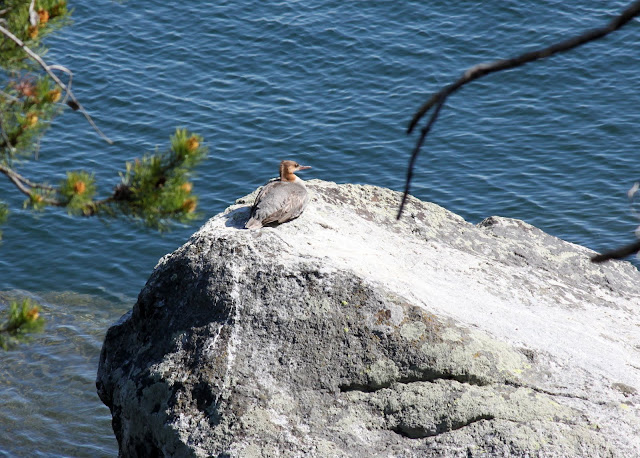 At the end of the trail back at the lodge we waited for the airport to deliver the lost luggage to my brother.  We watched some Uinta ground squirrels for entertainment. 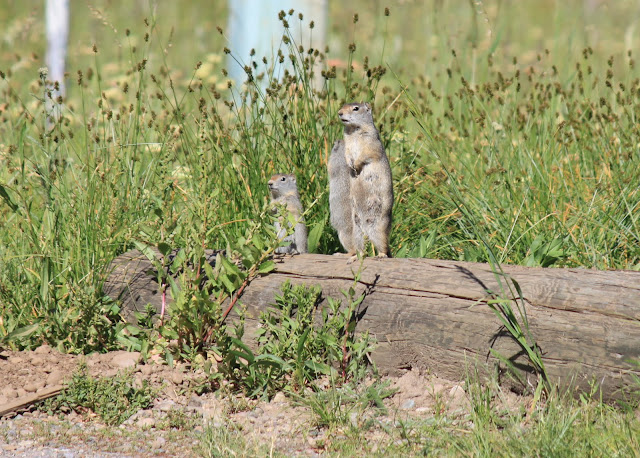 We were pretty beat after the hike and it was a long drive up to Mammoth Hot Springs in Yellowstone.  We managed to stop for one more moose, making the total for the day 5 moose! 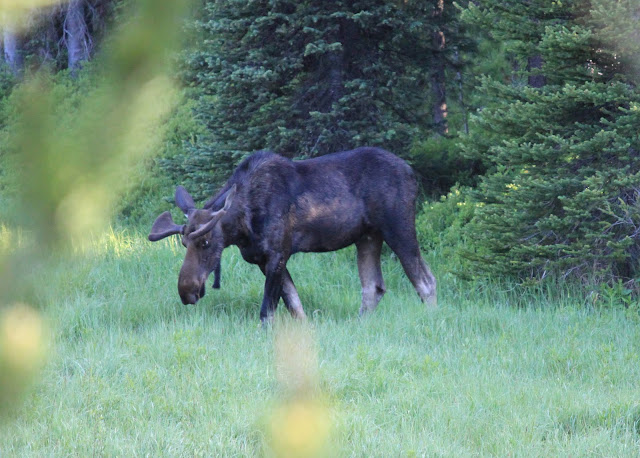