I spent yesterday exploring some spots around Wasco County I had never visited before.  Say what you want about county listing (like that it's totally stupid or whatever), but I gotta say I love having a reason to creep around new places, finding awesome little spots.  I started the day by getting off the interstate at Mosier to check out the scenic route to The Dalles, and stopped at a little park that may be called Rock Creek. 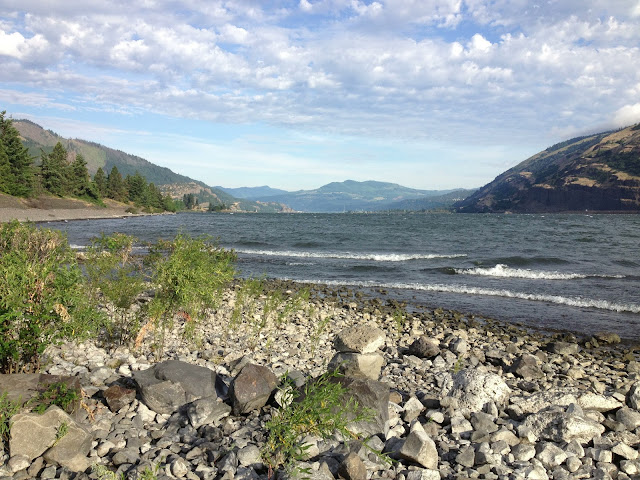 The park had a little sheltered spot that I can only imagine is for birding as it had no seats nor scenic view. 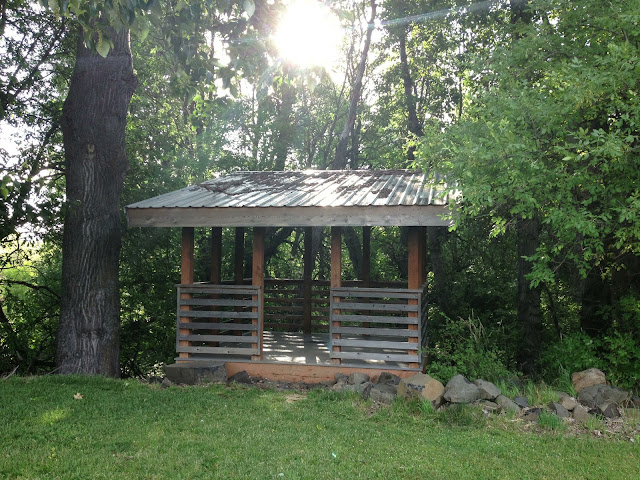 The dogs and I went in to investigate.  I was surprised to see a crow sitting on a branch about a foot from the shelter.  I decided it had to be fake, it wasn't moving and it was SO close.  Of course it was not in fact fake, but was in fact a gorgeous blue-eyed juvenile crow... 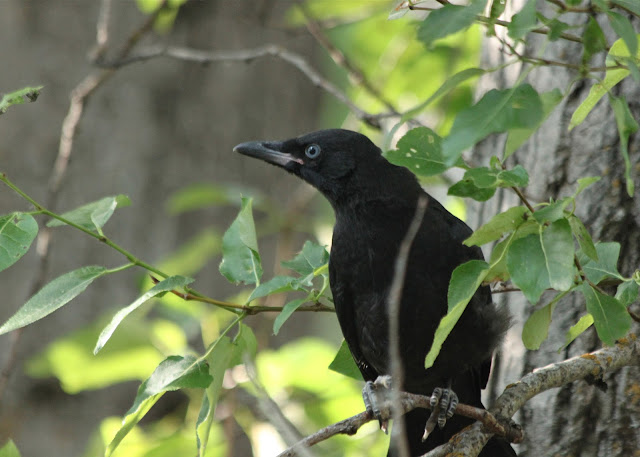 Back on the Historic Columbia River Highway I stopped a bunch of times to look at birds...and architecture and scenery and ground squirrels and deer and... 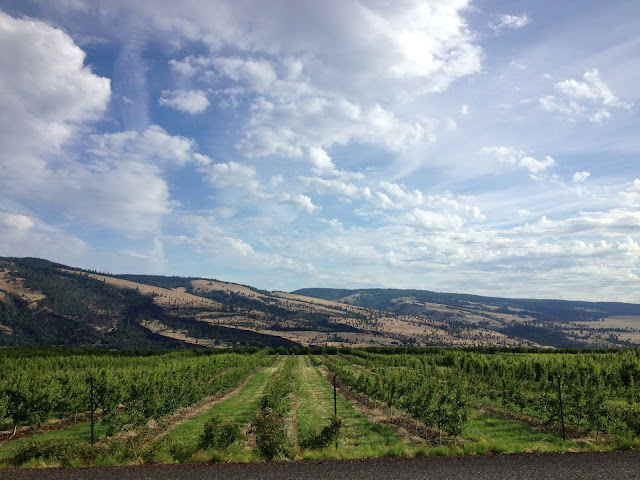 Western Bluebirds were abundant throughout the day, though this fella picked the nicest backdrop (and the weirdest lion face perch): 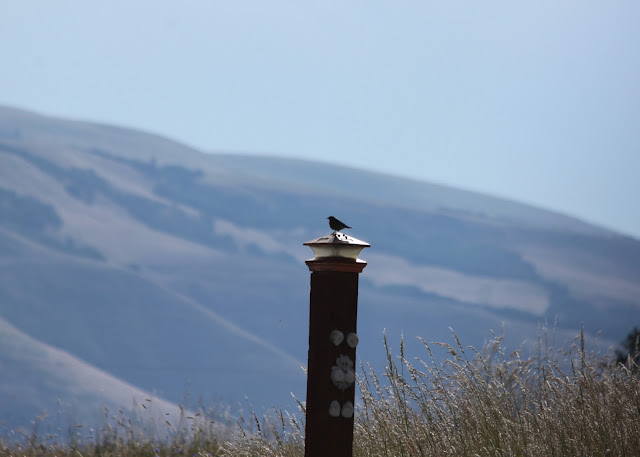 I pulled over just before the gorgeous Dry Canyon Creek Bridge, mainly because I had to pee, but also because it looked like a cool spot to walk around. 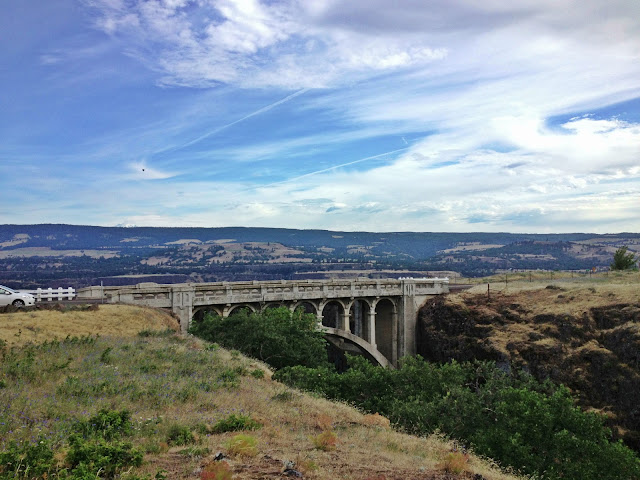 A couple of Black-capped Chickadees came by to check on me while I took care of business. 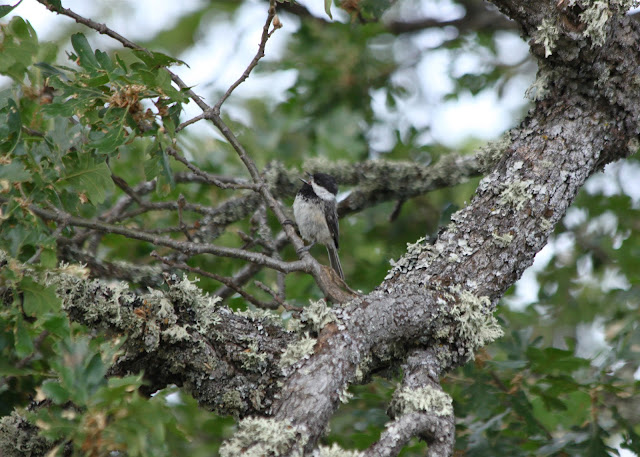 We stopped at Rowena Crest next to check out the scenic views. 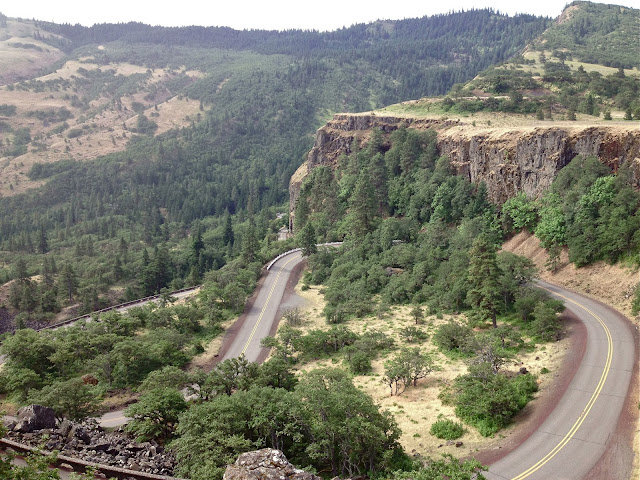 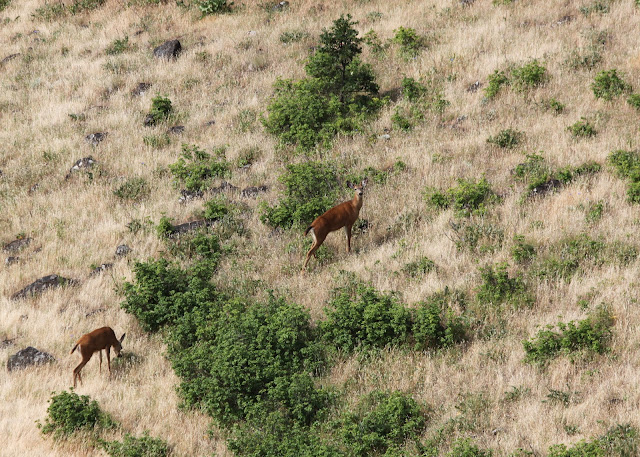 While checking out the view, I noticed a bird hop up onto the stone wall near me.  It was a fuzzy little guy, a juvenile Rock Wren I believe... 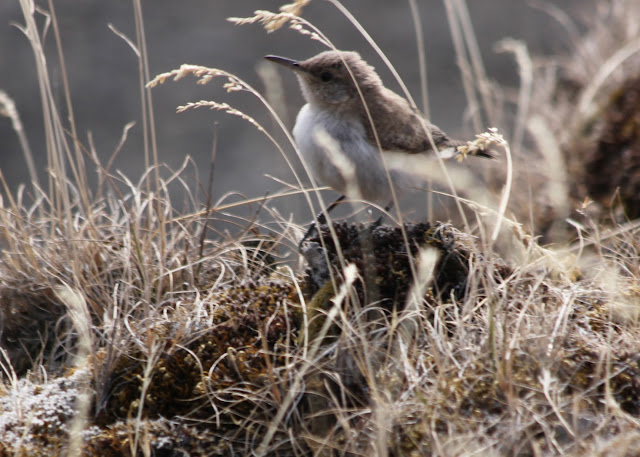 I stopped in The Dalles to eat the sandwich I brought, then drove up 197 to the Bank Swallow colony I first visited a couple years ago.  They were out and about and I tortured myself with the task of getting a decent photo of one. 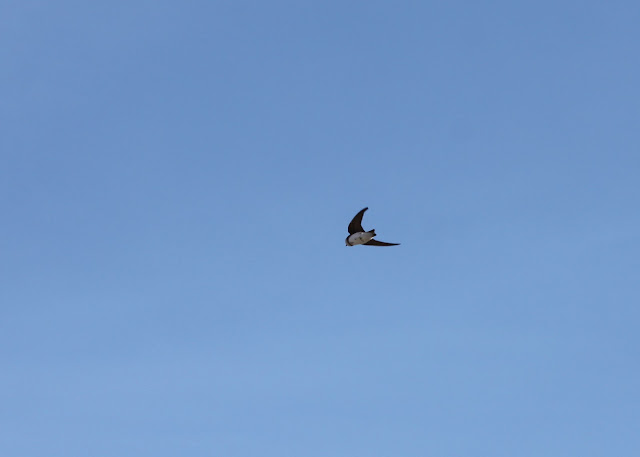 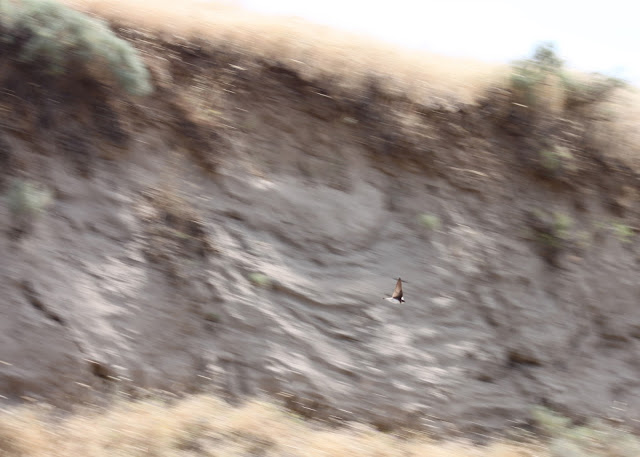 You get the idea.  I kept driving south looking for a turnoff for Dufur Mill Road.  I missed the turn, but turned on Dufur Gap Road instead where I found this dumb baby in the middle of the road. 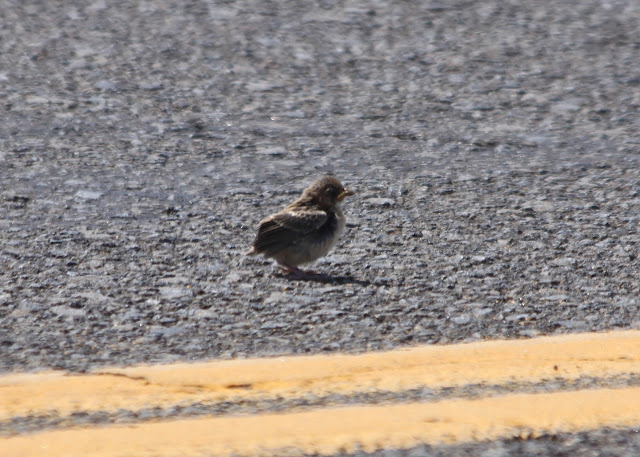 Bad photos, but any ideas what it is? 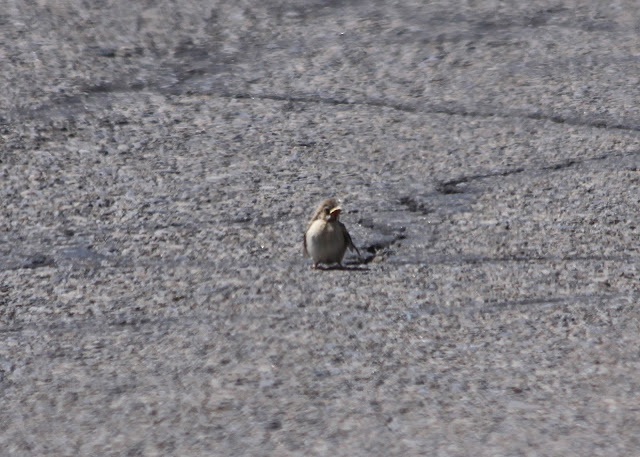 I herded it off the road where it took cover in a bush.  Natural selection will probably take its course soon anyway.

I finally found the correct road and made my way to Rail Hollow Road, a paved road that turned to gravel and dust.  It got fairly hot out and the dogs were not too impressed, but I found some good stuff. 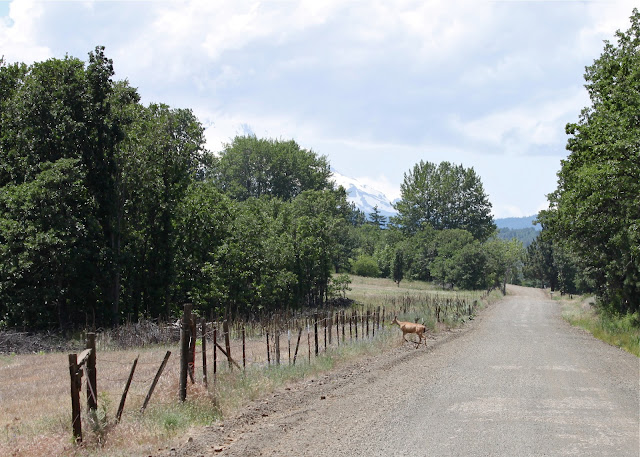 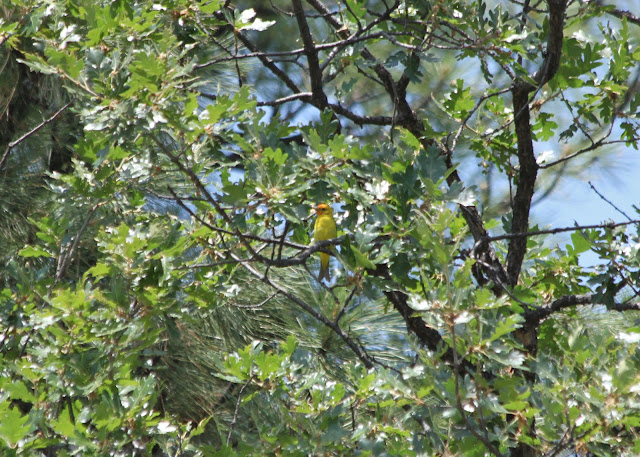 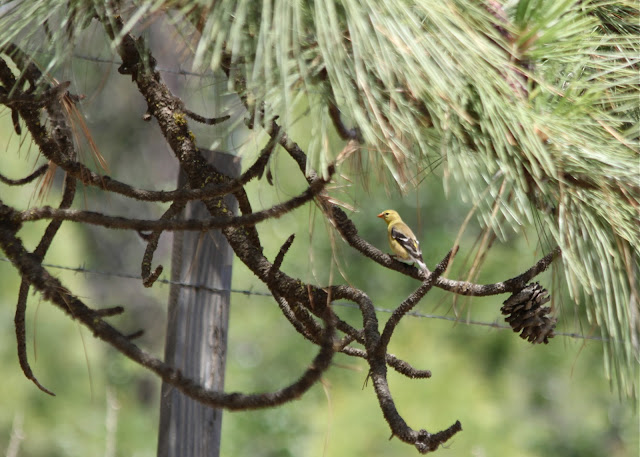 There were House Finches along the road but also some that were either Purple or Cassin's.  Both are expected in this area as the elevation is decent (I saw more Mountain Chickadees than other kinds here) but I have never had to discern the two.  Photos aren't great but hopefully can help determine which species I have here... 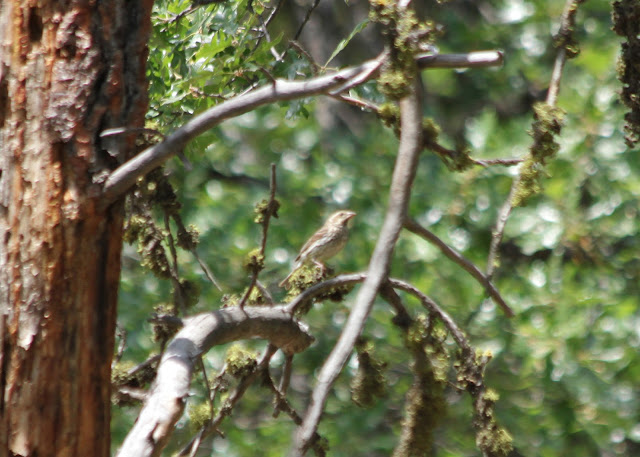 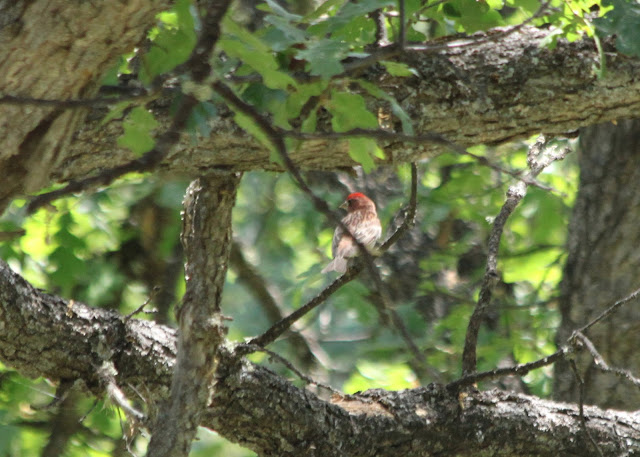 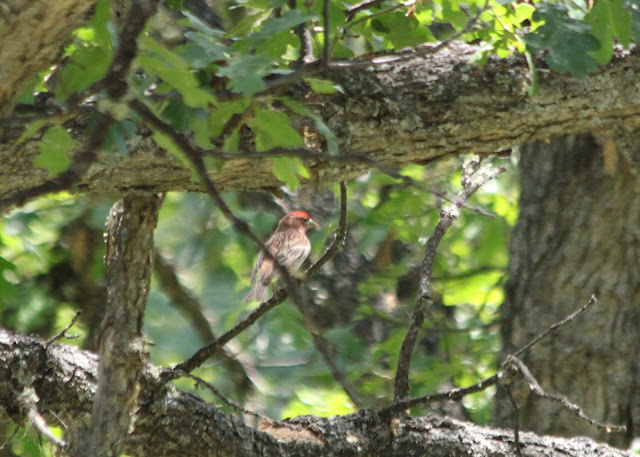 My last stop was the town of Dufur with the goal of tracking down some Eurasian Collared-Doves.  Dufur is a funny little town, a town where people kept waving at me like they knew me, a town where the local school (yep, the only school, K-12) uses a Pepsi sign for its announcements.  Like this gem: 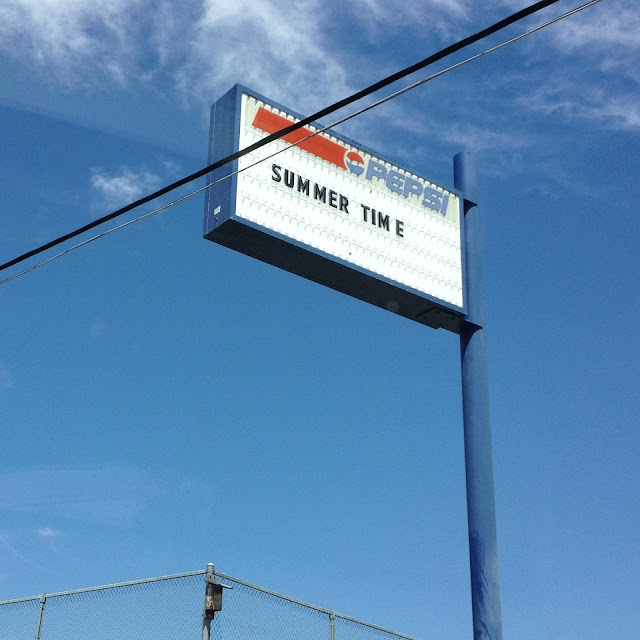 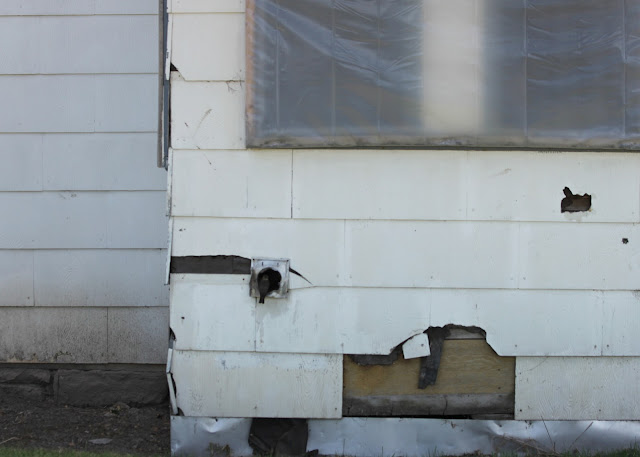 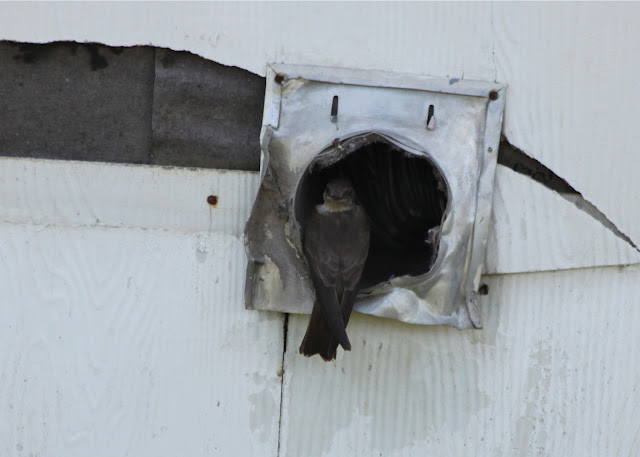 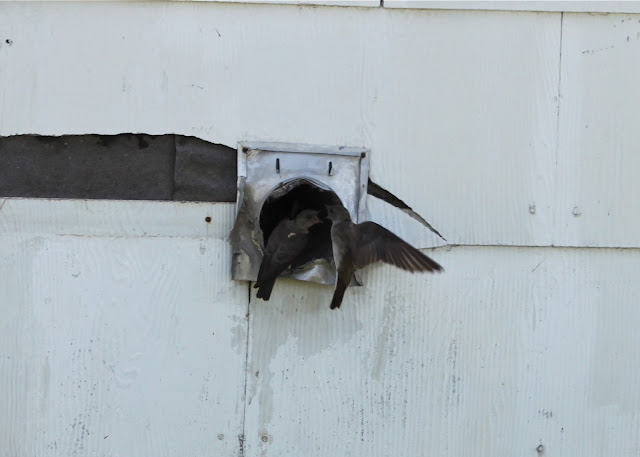 Pretty cool, since Northern Rough-winged Swallow was not on my Wasco County list yet.

It was an excellent trip, though the drive home was interrupted by an accident on 84 that turned the highway into a parking lot.  Seriously people were out and about walking their dogs and stuff.  Mine were dead asleep.  Eventually they cleared a lane, only adding about 40 minutes to my drive.  Good times!! 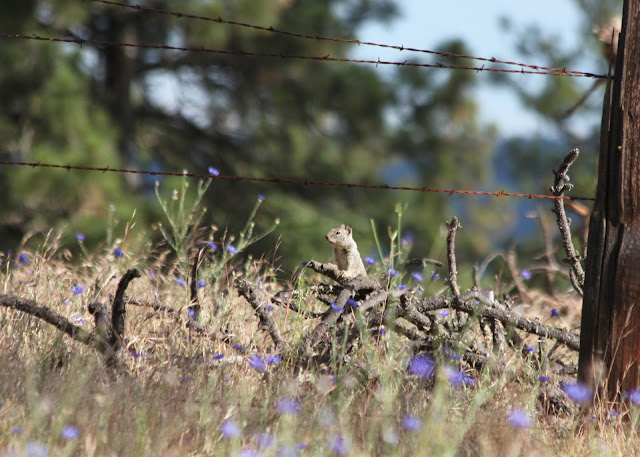