on September 15, 2013
Somehow I convinced my friend to wake up at a ridiculous hour yesterday morning to head up to the Sunrise area of Mount Rainier National Park and hike the trail to the Mount Fremont fire lookout.  I had promised my friend marmots galore, maybe bears, maybe mountain goats, deer, all that.  Apparently the marmots only hang out at Paradise, and we saw no bears nor deer.  Mountain goats saved the day.  As did the freakin amazing scenery... 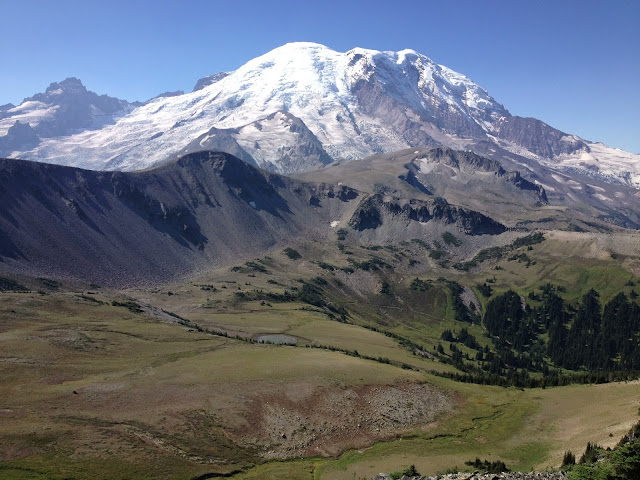 It really doesn't even look real.  The trail to the lookout was rocky and amazingly beautiful.  Looking behind us on the trail... 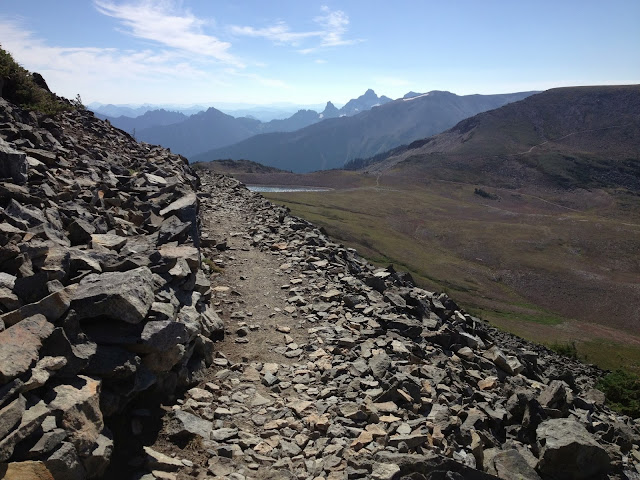 And looking ahead... You can see the lookout- it's a tiny square dot in the top left... 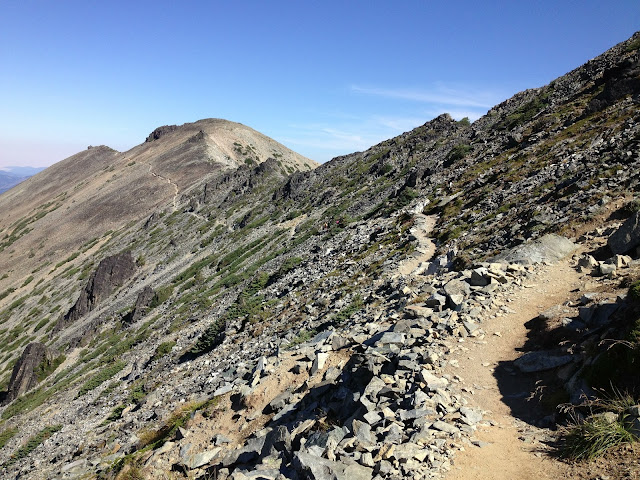 On the way up we didn't see many birds.  A couple of accipiters made for brief entertainment as they chased each other around and disappeared.  I believe they were both Cooper's but I am no expert. 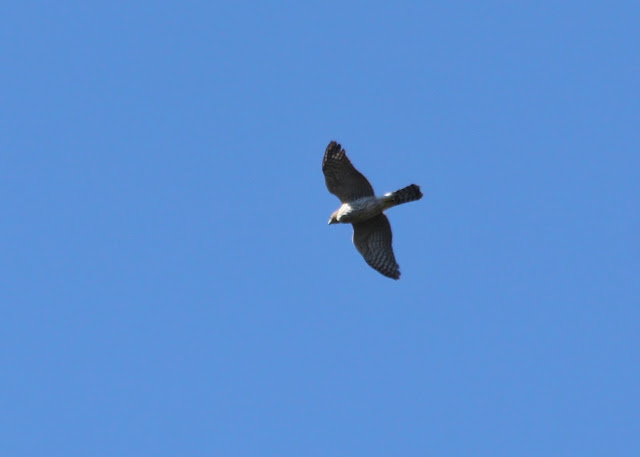 Townsend's Warblers were hopping around in the trees... 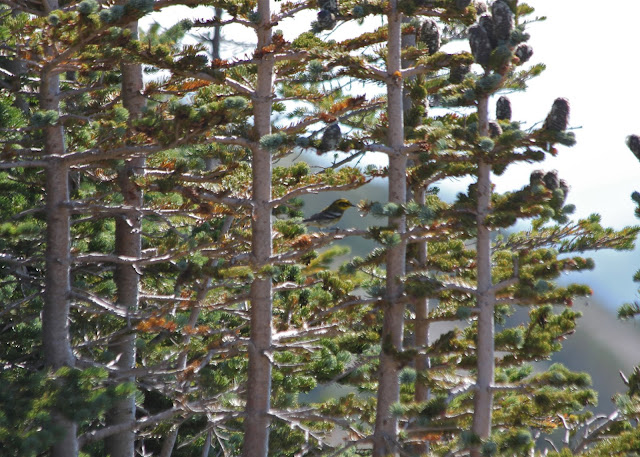 Cicadas were buzzing all along the trail... 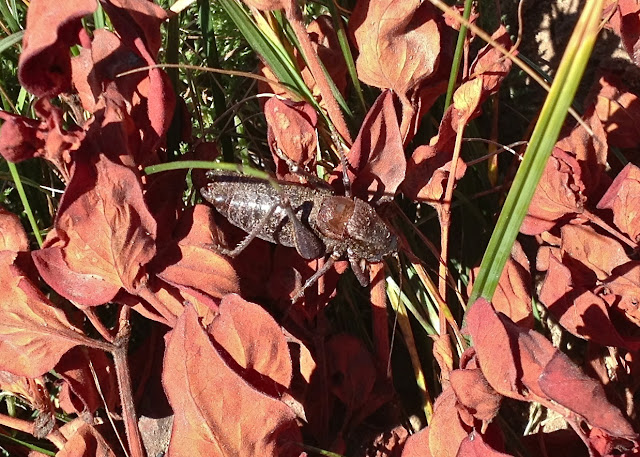 The fire lookout itself was pretty cool. 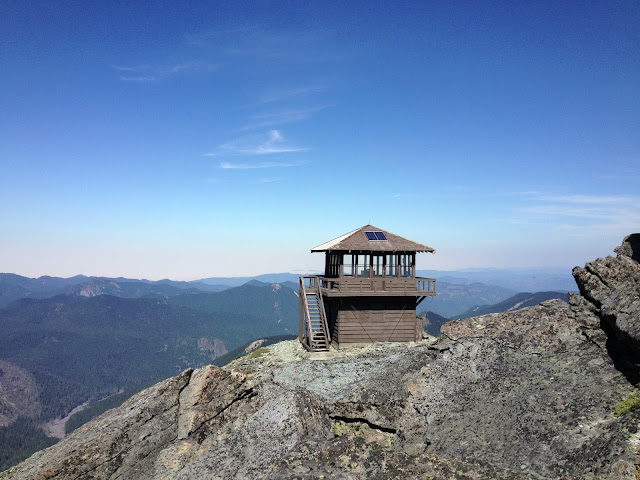 We stopped for lunch nearby along with several other hikers.  One person pointed out mountain goats on the next ridge... 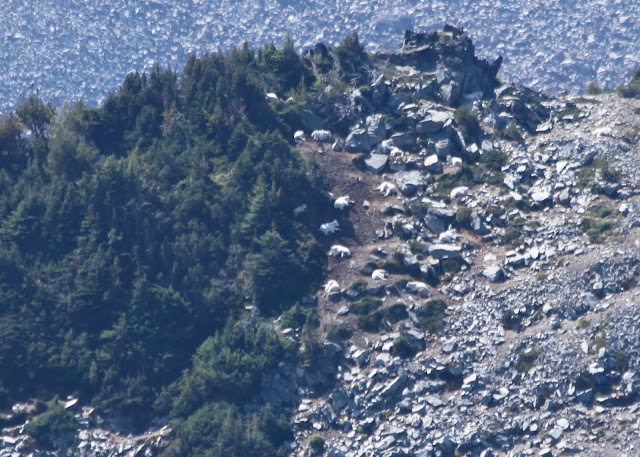 They were snoozing and FAR.  We hoped to get better looks on the way back down.  Before starting our descent we admired the peak of Mount Fremont which is just to the east of the fire lookout.  Then my friend noticed a couple of guys were hiking up it and we started looking to see if there was a trail.  That's when we found this guy: 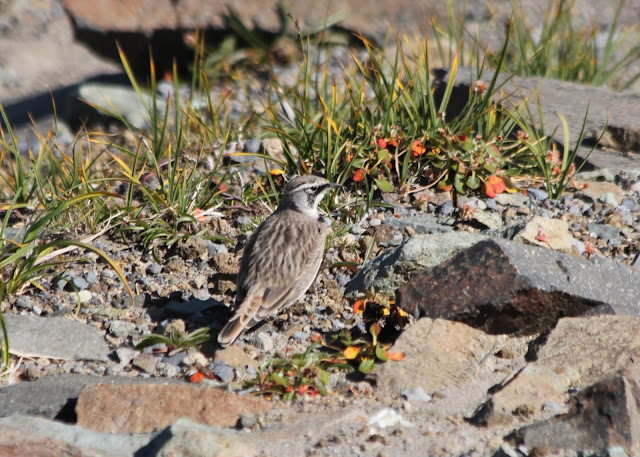 It's a Horned Lark but it took me a bit to accept that fact.  It's plumage is like none I had ever seen before on a Horned Lark.  In the next photo I think I can barely make out some faint yellow on the chin where I am used to seeing bright yellow. 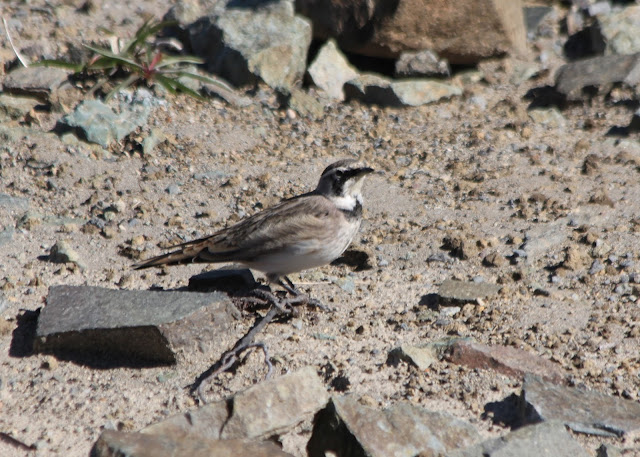 Is this bird just young?  Or is it the Arctic subspecies?  Thoughts?  Cool bird regardless.  Soon after the bird left with another flying overhead, then a couple of pipits flew in. 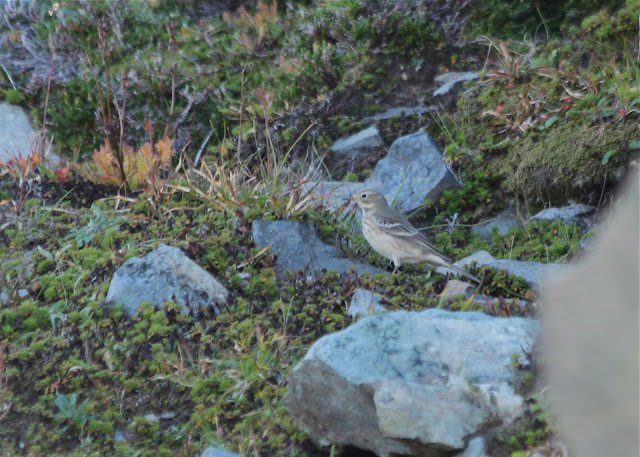 We decided there was in fact no trail to the actual summit and continued on the trail down.  The mountain goats had disappeared but we were psyched to find they had just rambled down the other side of the ridge to a large meadow. 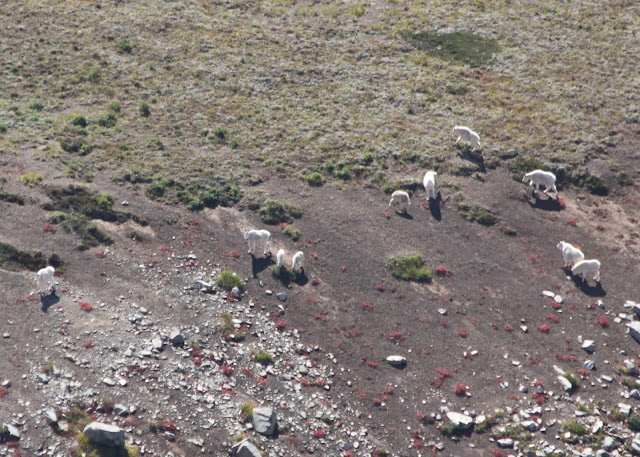 There were about thirty goats in total- so awesome.  But then we saw something else in the meadow... It was the two guys we had seen blazing their own trail up to the Mt. Fremont summit.  And now they were blazing their own trail through a meadow surrounded by signs indicating it was fragile and was not to be walked upon.  Time for public shaming... 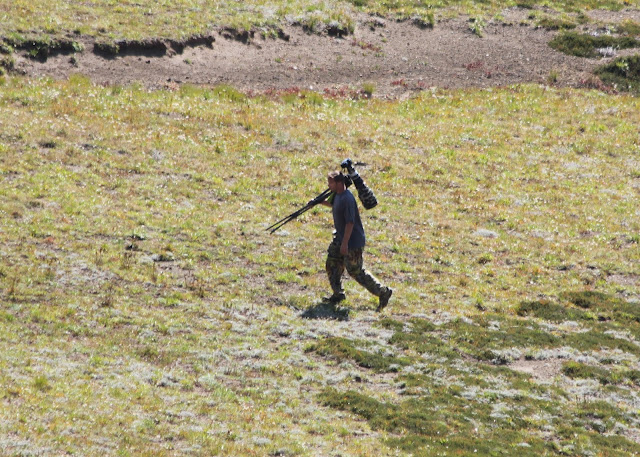 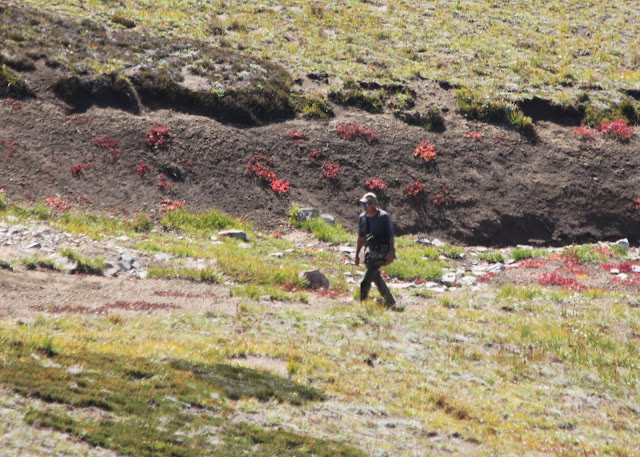 It was bad enough that they were trampling everything, but we realized they were following a mountain goat.  They had no trouble scaring it across the whole damn meadow until it had to turn and cross the trail we were on.  Obviously we benefited from the douchebags' actions, but I felt bad for the goat. 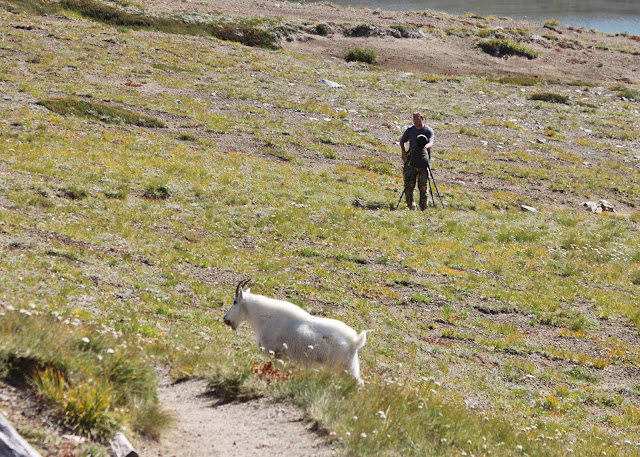 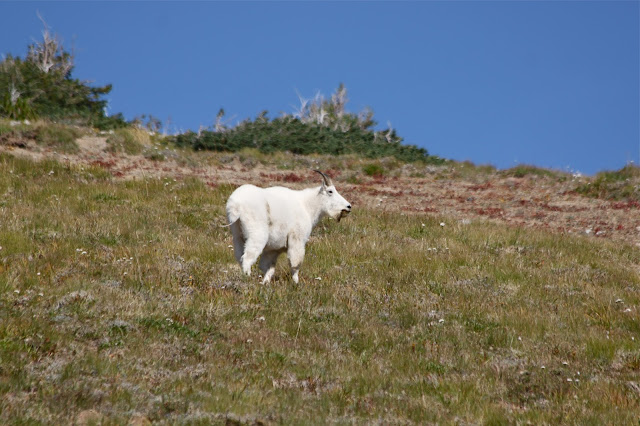 As we made our way back to the intersection of our trail with the main trail back to Sunrise we saw a park ranger standing with her hands on her hips.  She greeted us but kept her eyes on something behind us.  I asked her if she was going to yell at the two dudes.  She didn't even make eye contact with me, just said, "yes that's what I'm about to do."

Other wildlife on the trip included ground squirrels and chipmunks. 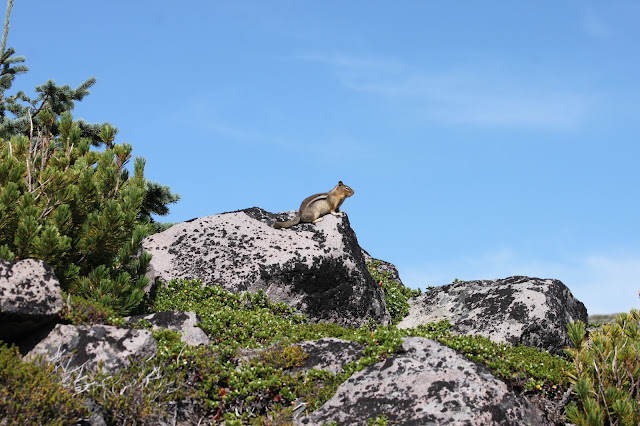 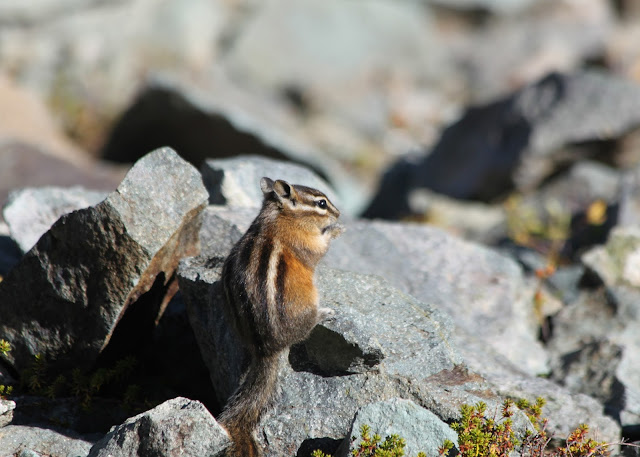 Such a beautiful place, I forget just how amazing it is...  I hope to go back next month sometime to try for ptarmigan for the billionth fourth time.  One last taste of wildlife: 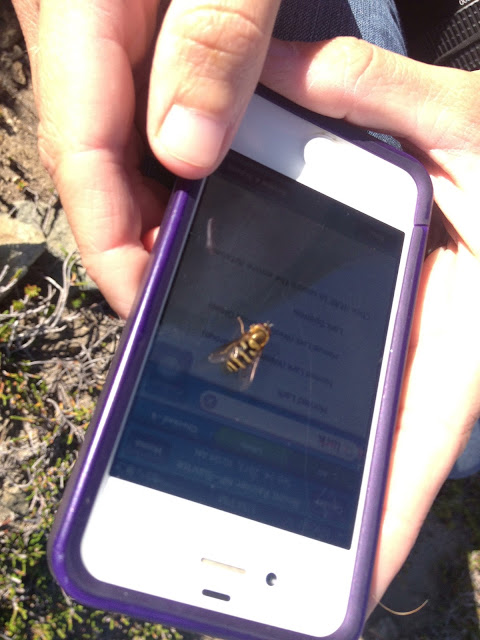 While adding Horned Lark to my eBird list this bee landed on my phone and starting making a sound like it was deflating.  I relocated it to the ground where I'm pretty sure it died.  Good times.
American Pipit Horned Lark Mountain Goat Townsend's Warbler