Where's your man at?

on September 22, 2014
Oh, northeast Oregon.  It's still the wild west up in that corner of the state (in much of the state really) and backwards notions such as asking a lady "Where's your man at?" while she's trying to change a tire on a deserted gravel mountain road is completely normal.

Does that set the scene for my recent camping trip for you?  No?  Let me try again: 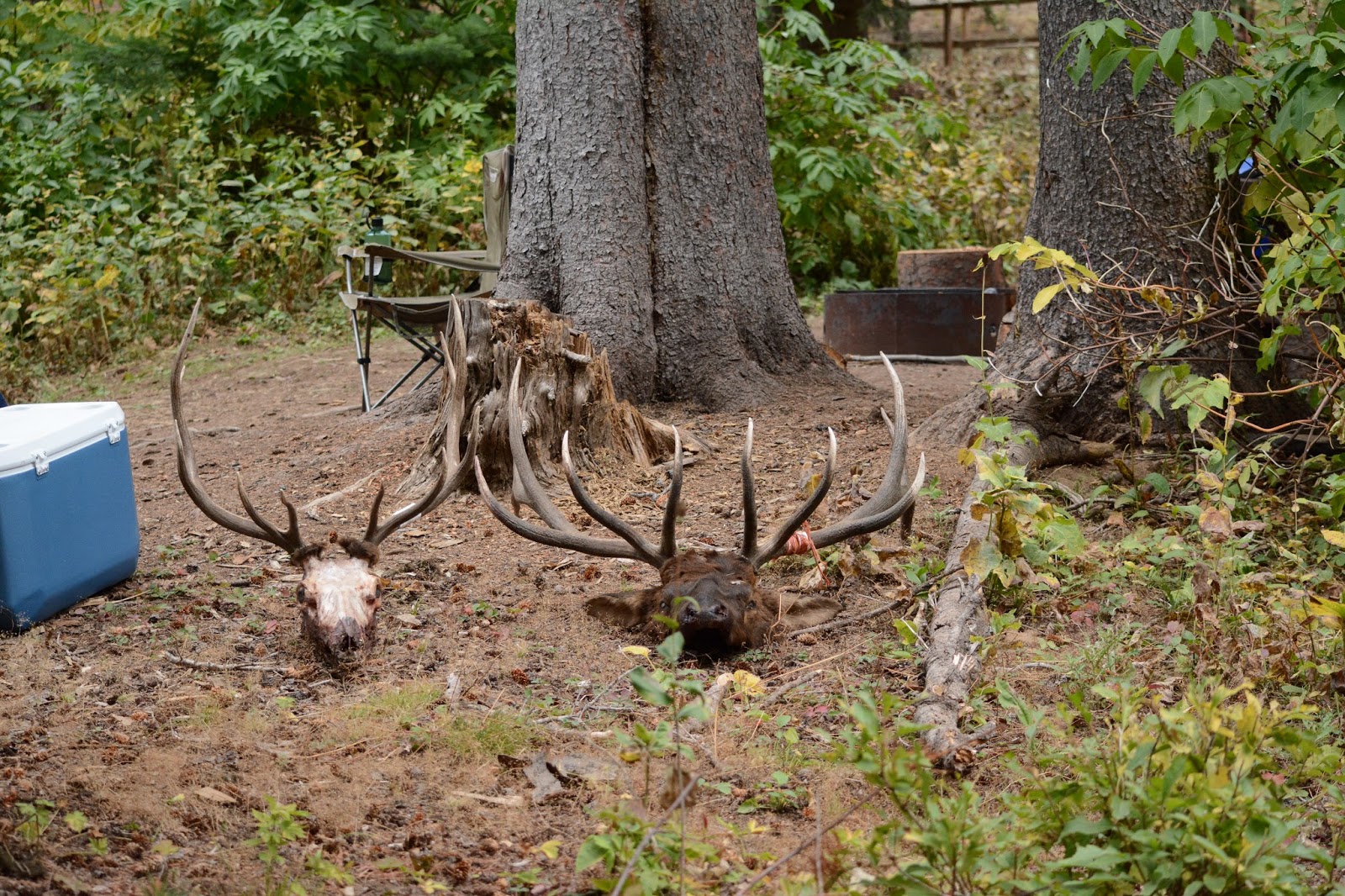 I am pretty sure I was the only person camping in NE Oregon this weekend who was not on some kind of elk hunting expedition.  Some of you might know I'm vegetarian and might have some preconceived ideas of how I feel about hunting so let me clear things up.

I hate hunting for sport or trophy.  I think it's completely fucked (yeah I said it, sorry, mom).  But if going out and killing an elk will help feed your family for the winter, then whatever.  I have little respect for anyone who eats meat and doesn't have the balls to kill their own food (and kill it properly, with minimal suffering and all that hippie shit).   If everyone went out and hunted their food, rather than supported factory farms, well, things would be a lot better. 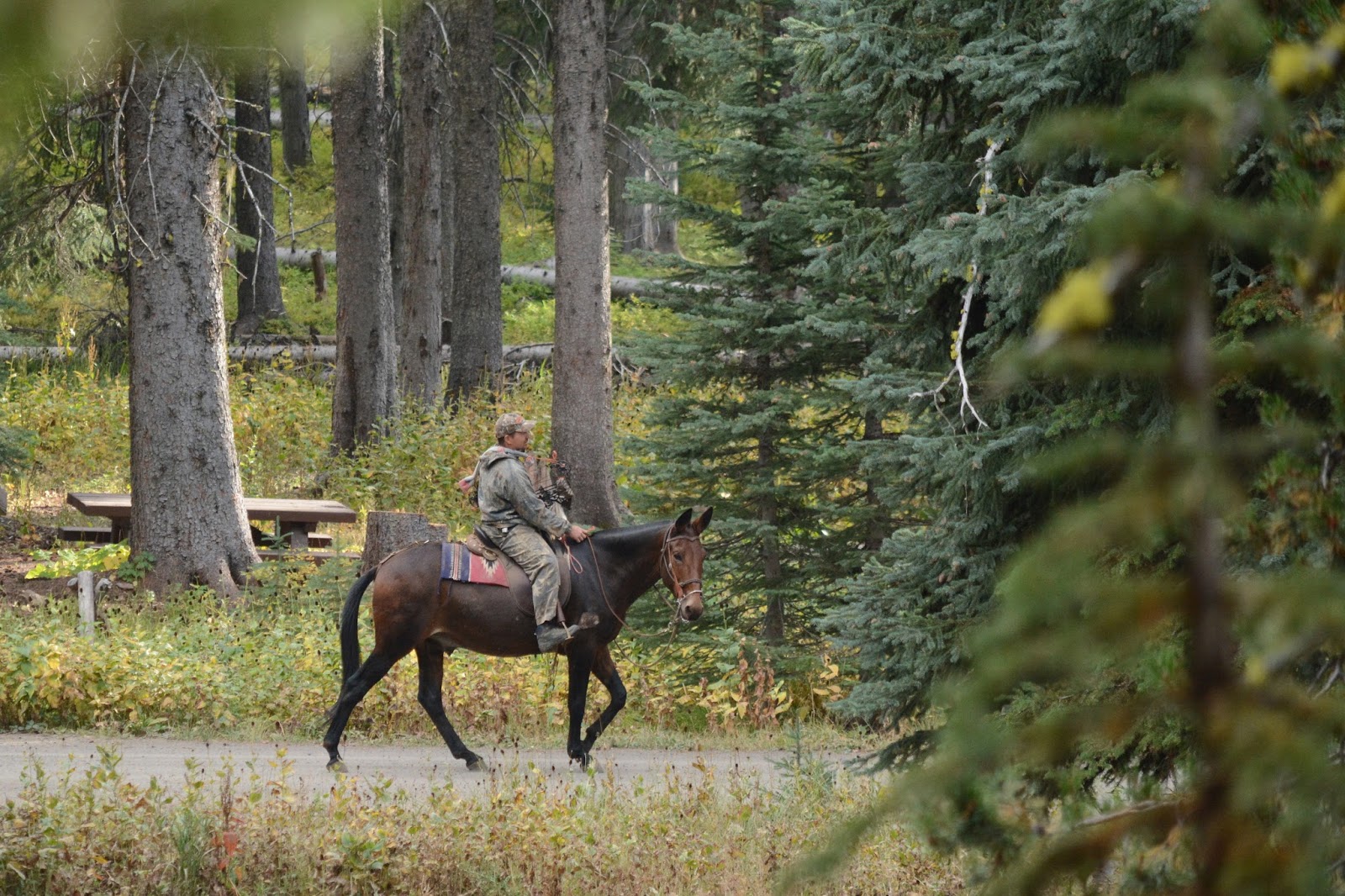 I can't say for sure which kind of hunters I encountered this weekend but honestly, I was kind of fascinated by them.  They all used horses or mules and many were in full blown western gear.  The one I talked to was waiting for the rest of his party to return for the day.  He didn't mind me photographing the heads- I told him I was looking for birds, particularly grouse, and he said there had been some around earlier, but "mostly just blue jays and camp robbers."

Who knows, maybe they were douchebags.  But still nowhere near as douchey as the local duck hunters I'm used to encountering.

Wow, sorry, anyway...  I wanted to camp out there mainly because it was new territory for me- a corner of the state that was still a mystery to me and I wanted to do some exploring.  Plus birds.  I began explorations by getting off the interstate at Old Emigrant Hill Road and taking the scenic route towards Spring Creek.  I stopped to check out this feather in the road: 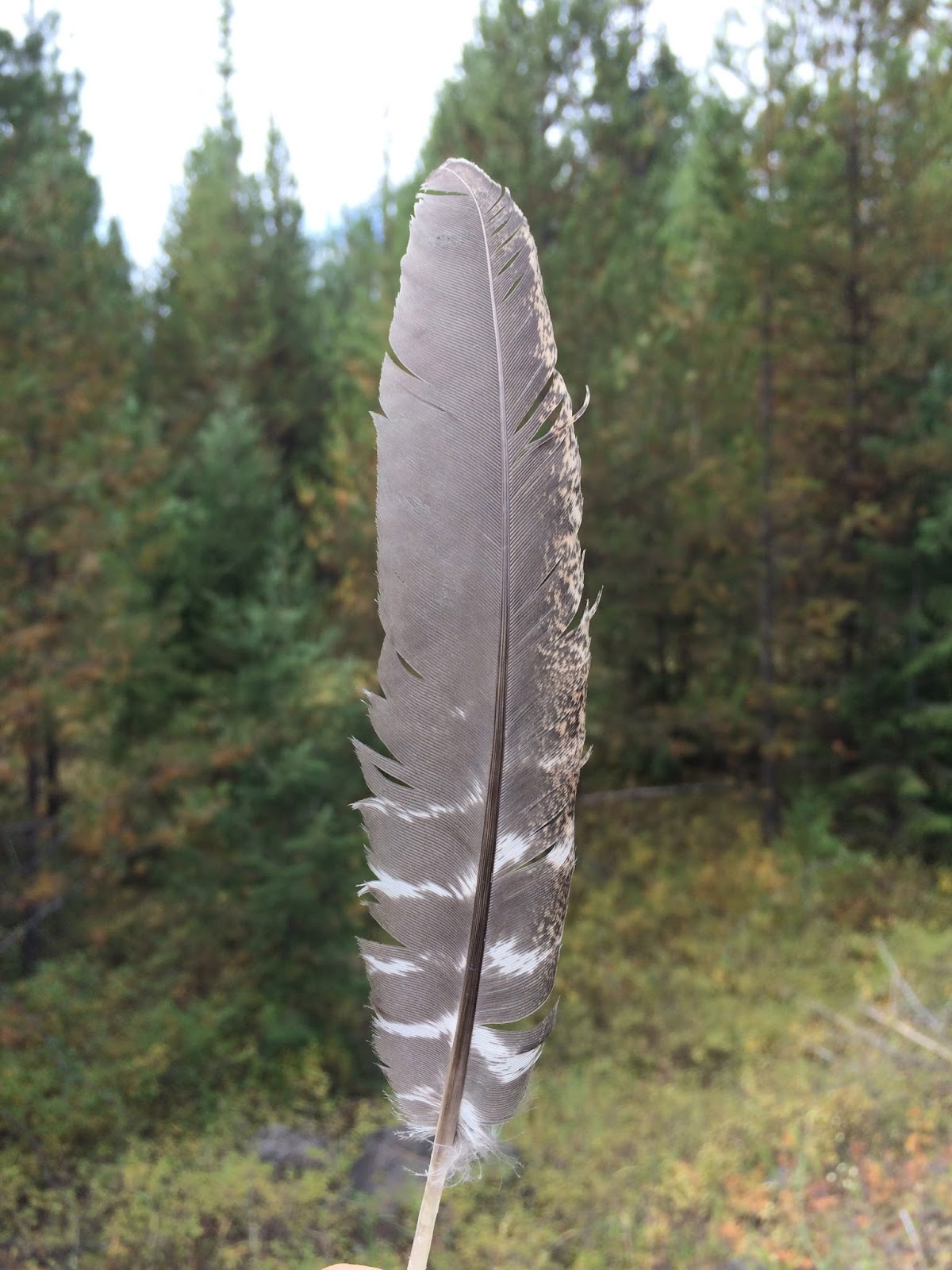 I'm stumped.  I made it to the Spring Creek area where I had heard rumors of Great Gray Owls.  I was not expecting a billboard with a map of all the known owl nesting sites.  Wow.  I will be returning next spring for sure.  Also in the area: 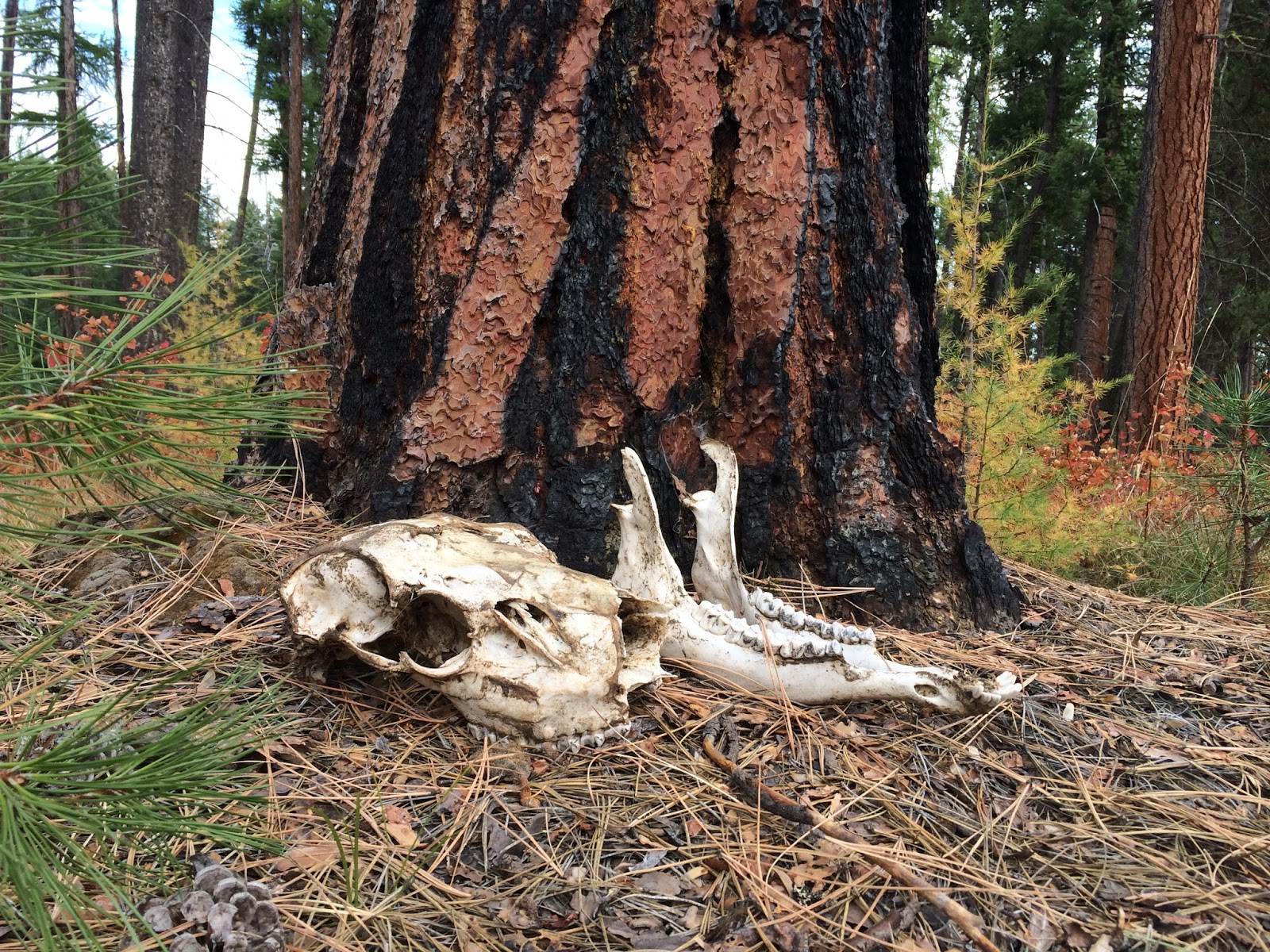 When leaving the area I found this: You better believe I checked to see if there were any filled bags in there- nope.  I kept driving stopping to check out Hilgard Junction (yawn) and finally made it to La Grande.  From there I drove out of town towards Cove, stopping to peak at a Swainson's Hawk on a pole. 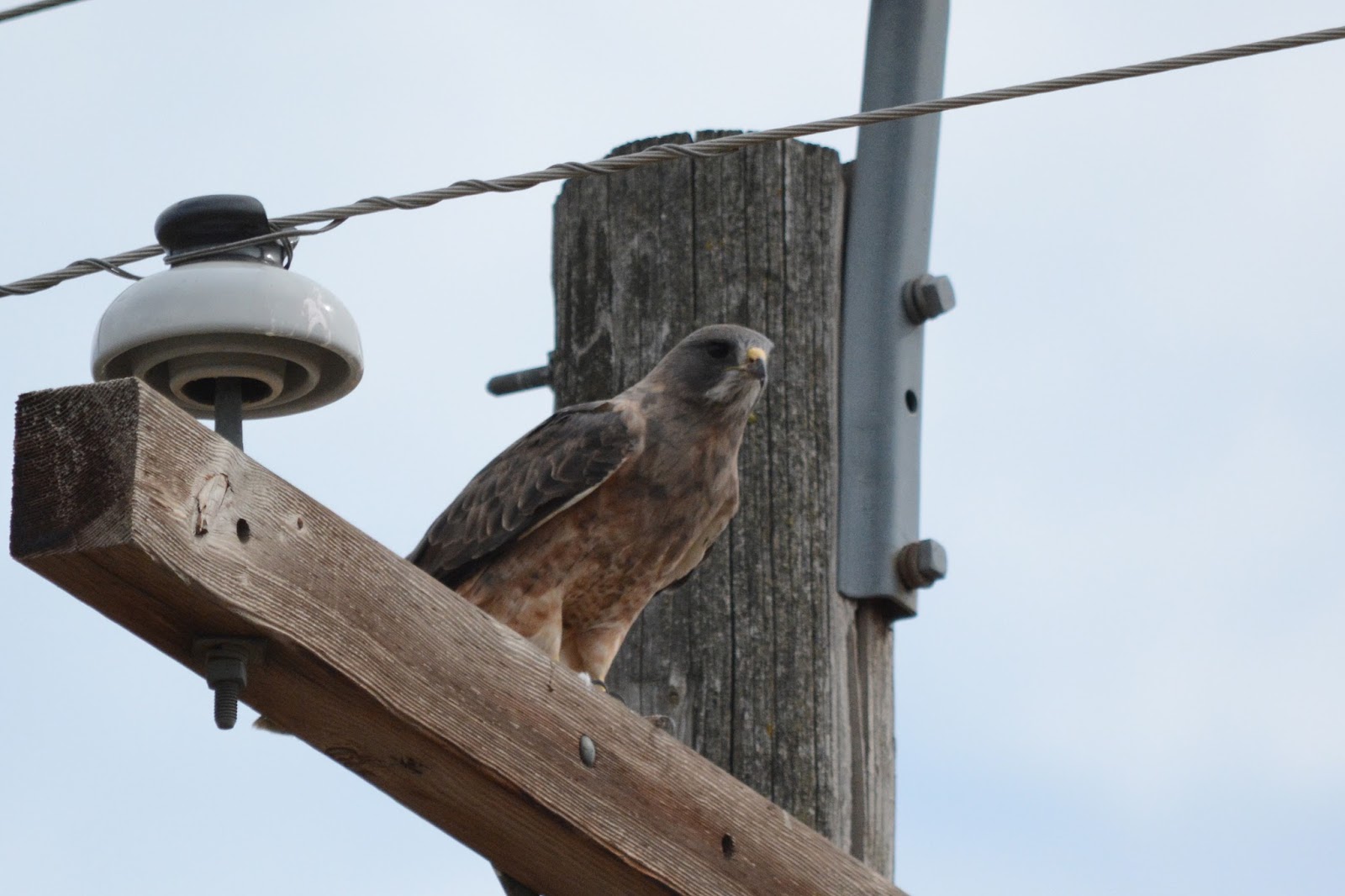 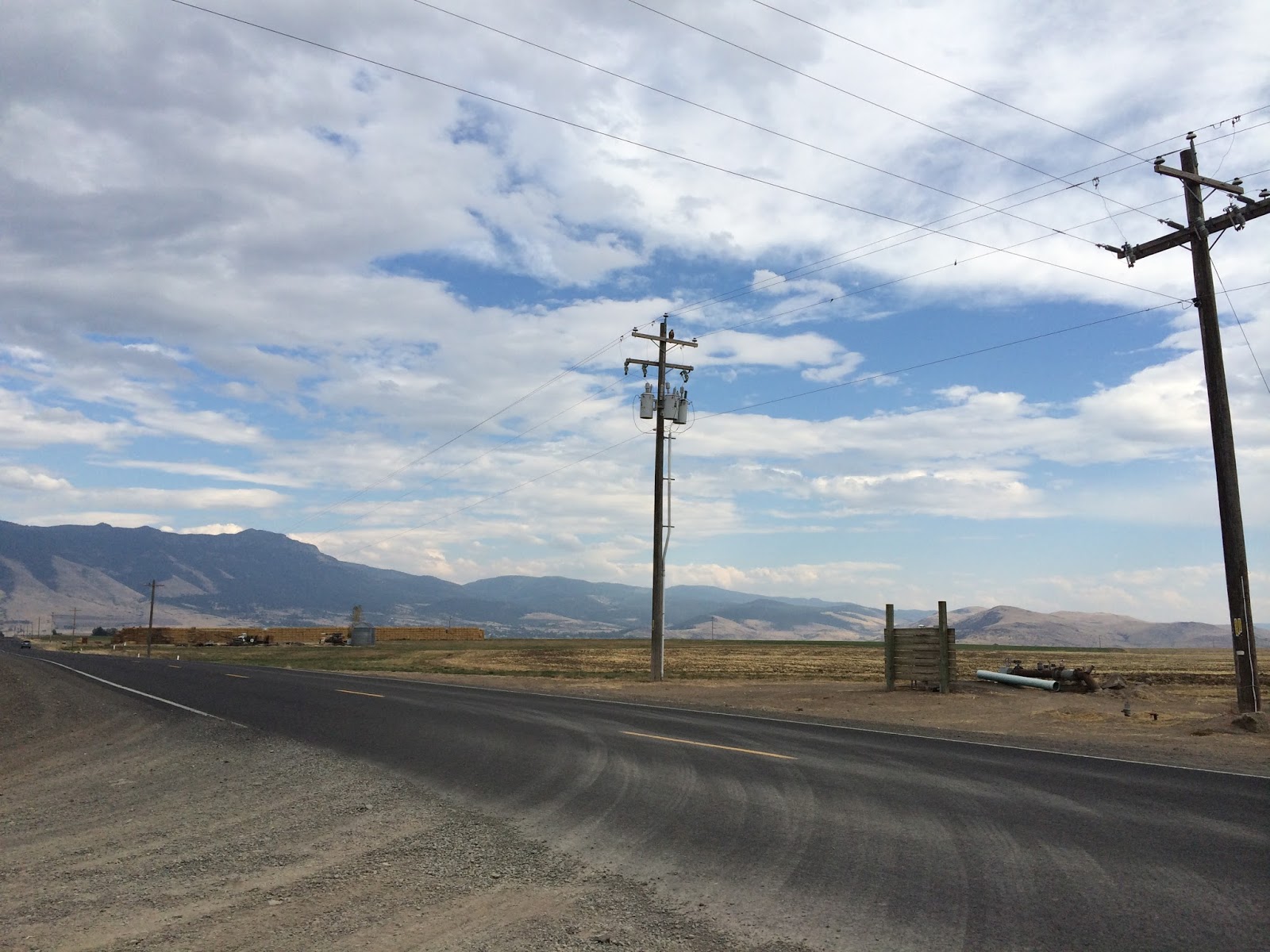 From Cove I drove up Forest Road 6220 to the Moss Springs Guard Station Campground to settle in for the evening.  This is where I encountered the "heads" on display and more horses and mules than I am used to camping near.  Between those animals and the local mule deer, our evening dog walk was quite exciting. 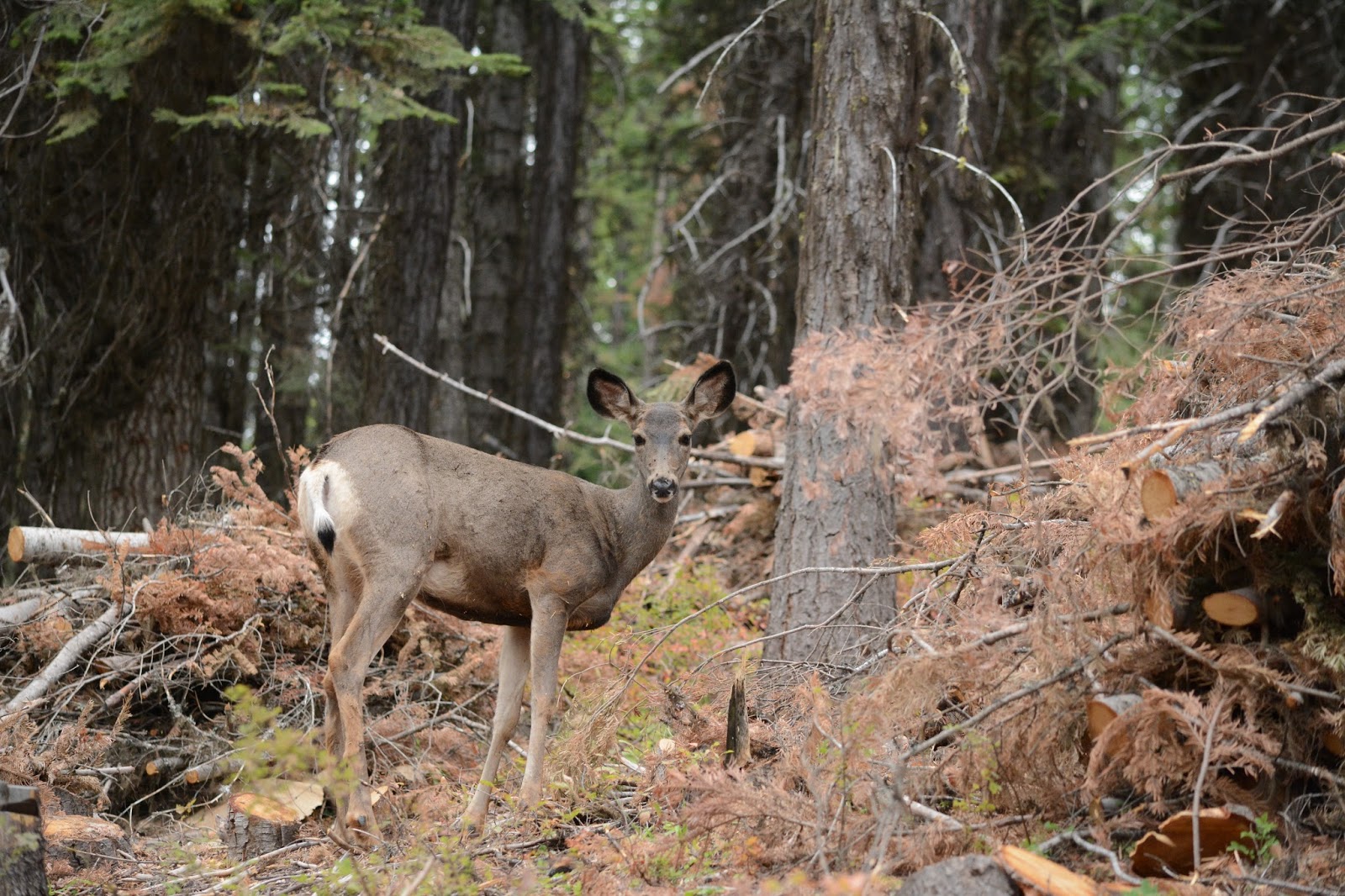 The birds were all the noisy and expected ones- Clark's Nutcrackers, Gray Jays, Steller's Jays, etc.  In the morning we got up and on the road to start looking for grouse when I realized I had a flat tire.  It took me about 45 minutes to get the spare on (15 minutes of which were spent looking for where the damn jack was hiding) and we were back in action.  Maybe a mile down the road I was thrilled to find three Ruffed Grouse! 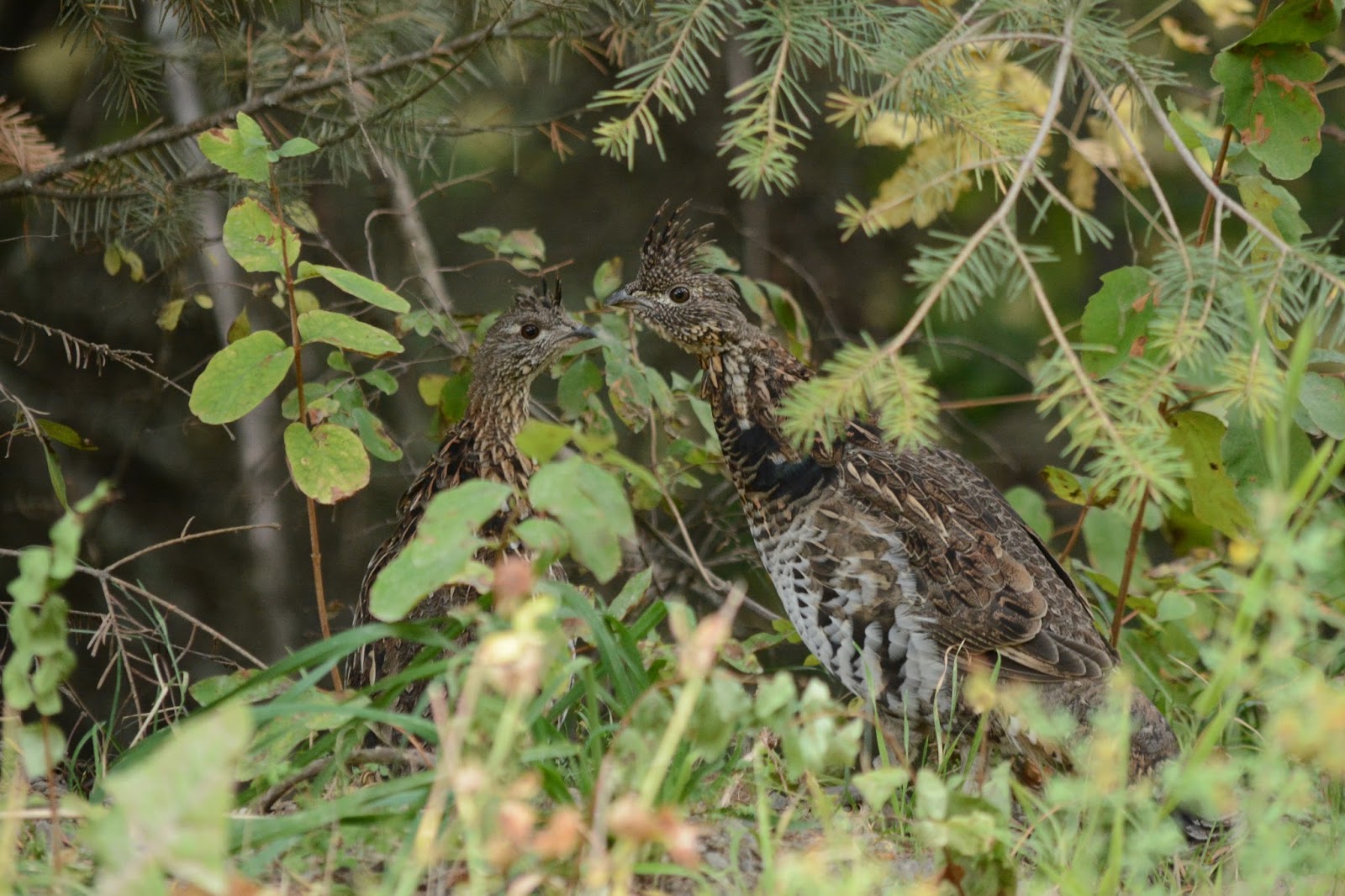 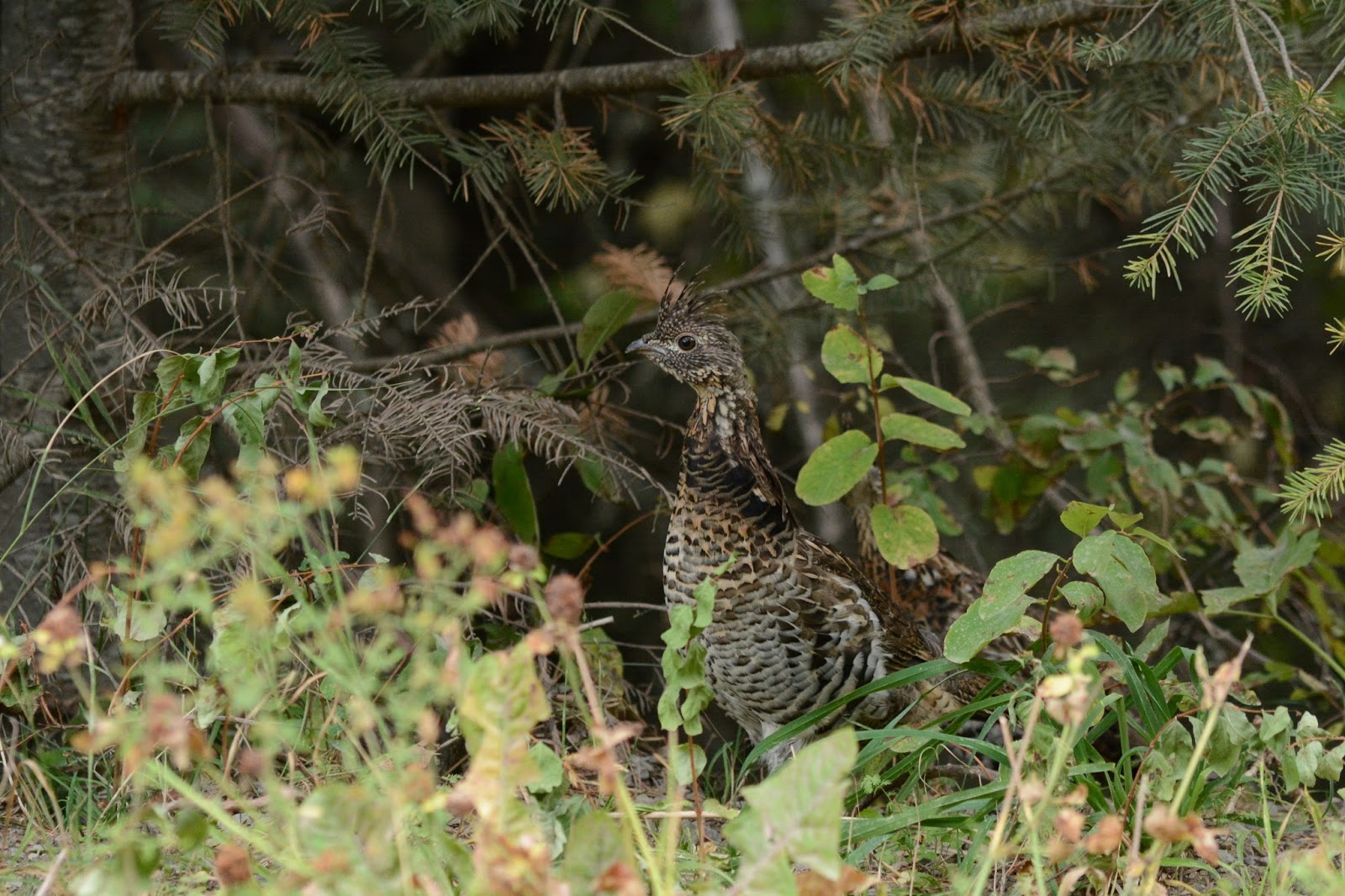 Boom!  Flat tire worth it!  Before this I had only seen one Ruffed Grouse, back in my pre-birding days in 2008, on a hike in the Hoh Rainforest in Olympic National Park.  It was the first bird I ever looked up in a field guide.  Not a spark bird, but it was definitely the beginning of the desire to identify things.

After a visit to the Les Schwab in La Grande where they found a shoddy patch on an old puncture had worn off, I drove up and into the Blue Mountains and Umatilla National Forest.  I stopped at a viewpoint along highway 204 that was, well... 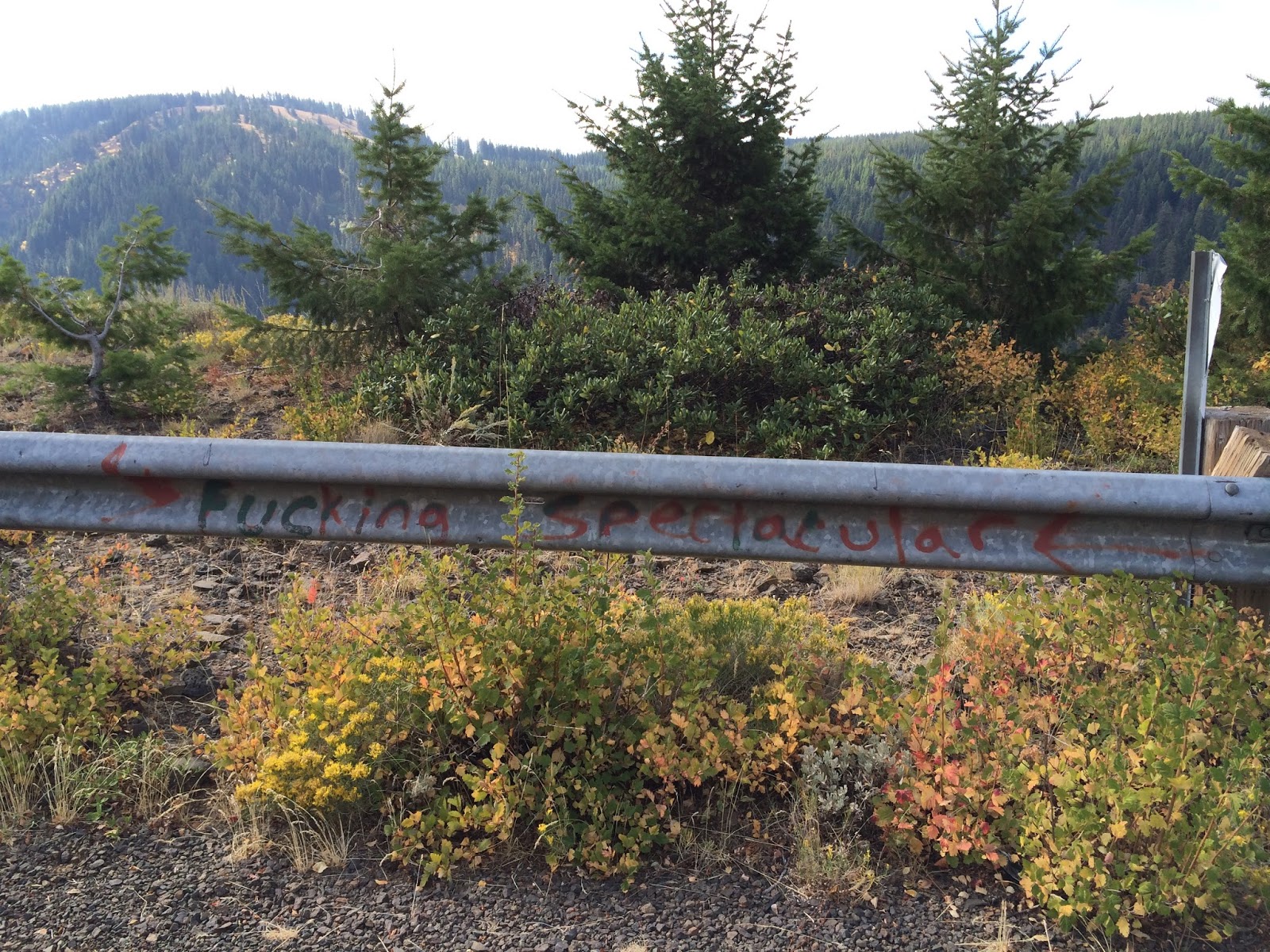 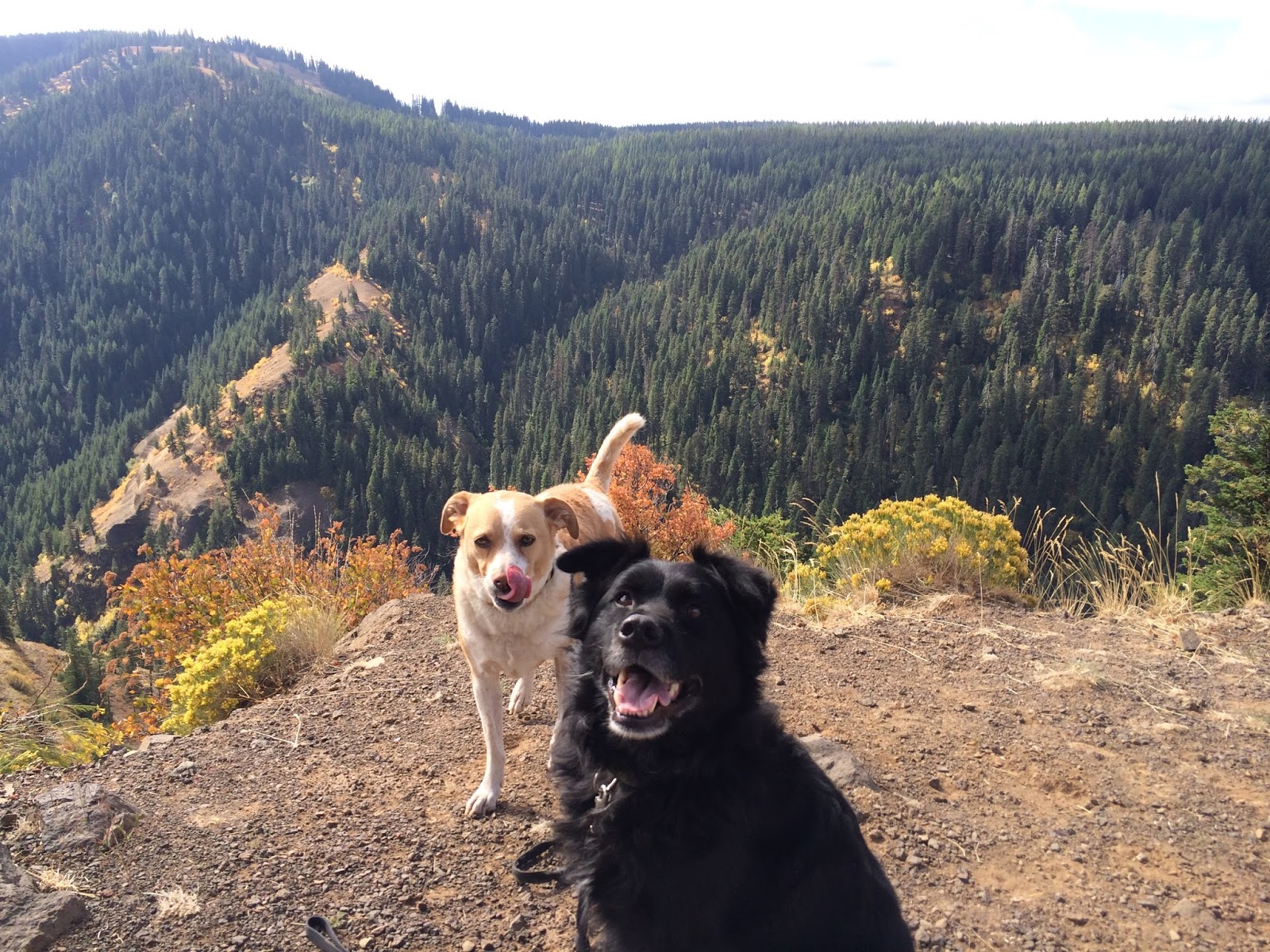 The reason for this diversion?  Somewhere I had read that there's a campground where in September and October, Boreal Owl is possible.  Enough said, right?  Unfortunately the campground was located 12 miles down Forest Road 6403.  My car said hell no after the first mile.  But it was a beautiful mile.

This was the place for accipiters.  First this bird came flying over... 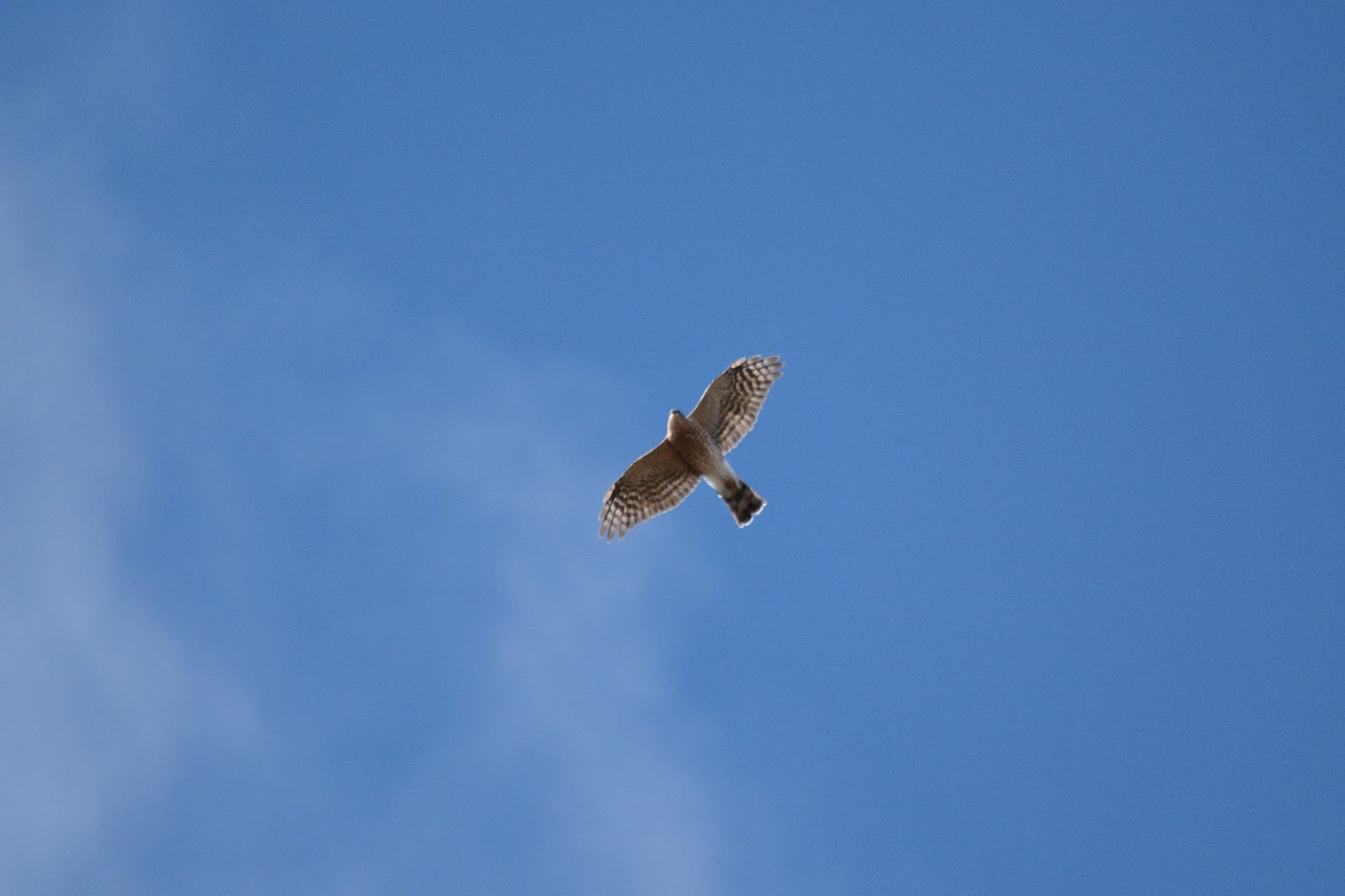 Later I watched two accipiters battling in the distant sky.  I was unable to turn either bird into a goshawk despite a decent effort.  I left this beautiful spot to head towards our camping destination for that night:  Lick Creek Campground along the Hells Canyon Scenic Byway.  I believe birdingoregon.net suggested this location as "famous" for Spruce Grouse. 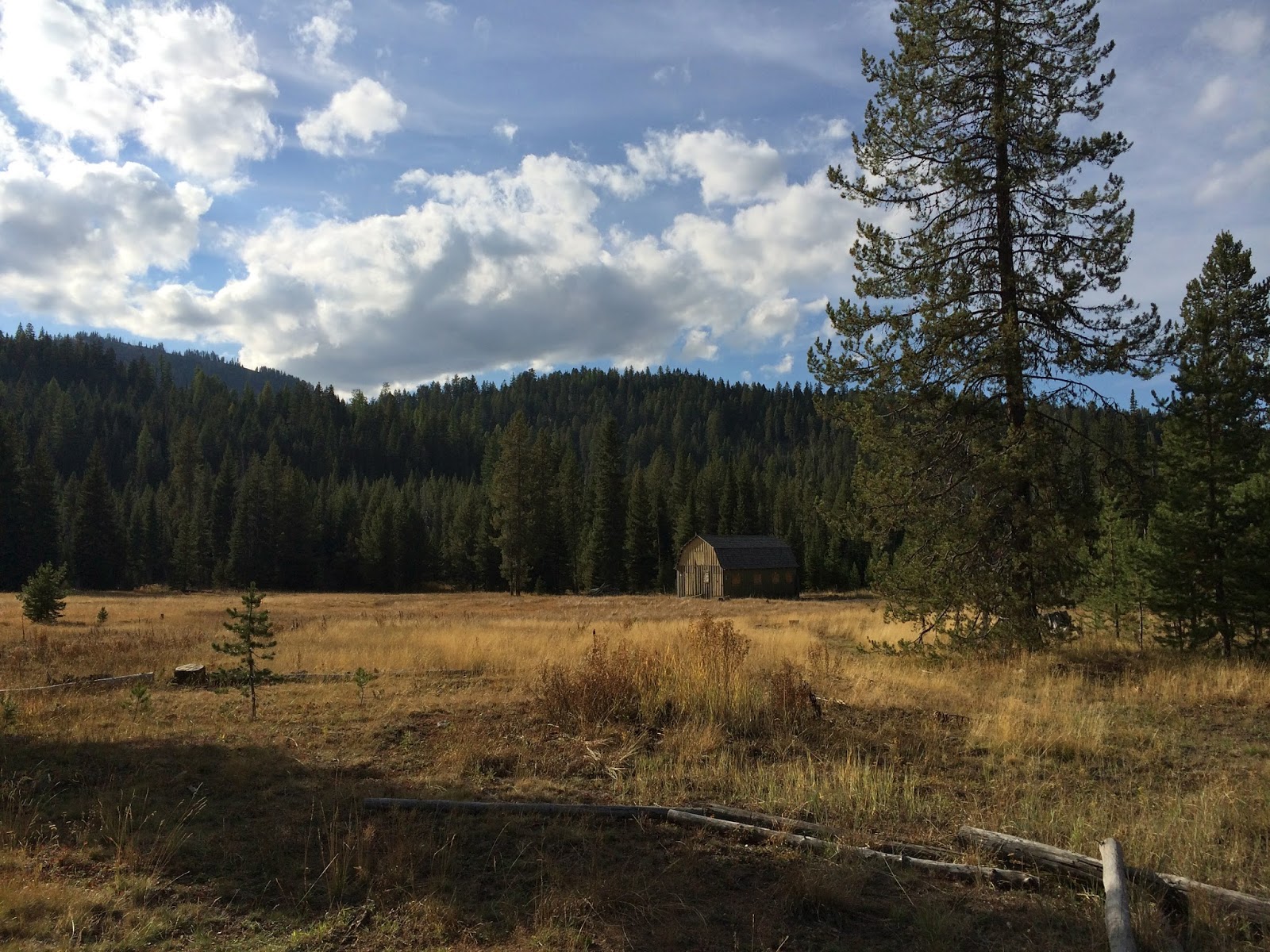 Nope.  Barely any birds around, even on a long walk with the dogs.  A Belted Kingfisher working the creek was the only new one for the trip there.  Again I was the only non-hunter camping there.

In the morning we walked around again but eventually gave up and headed to McCully Creek.  This was another spot that is supposed to be loaded with grouse.  The directions I had said to hike in from the trailhead, taking the left fork where the gravel ended.  So I did. 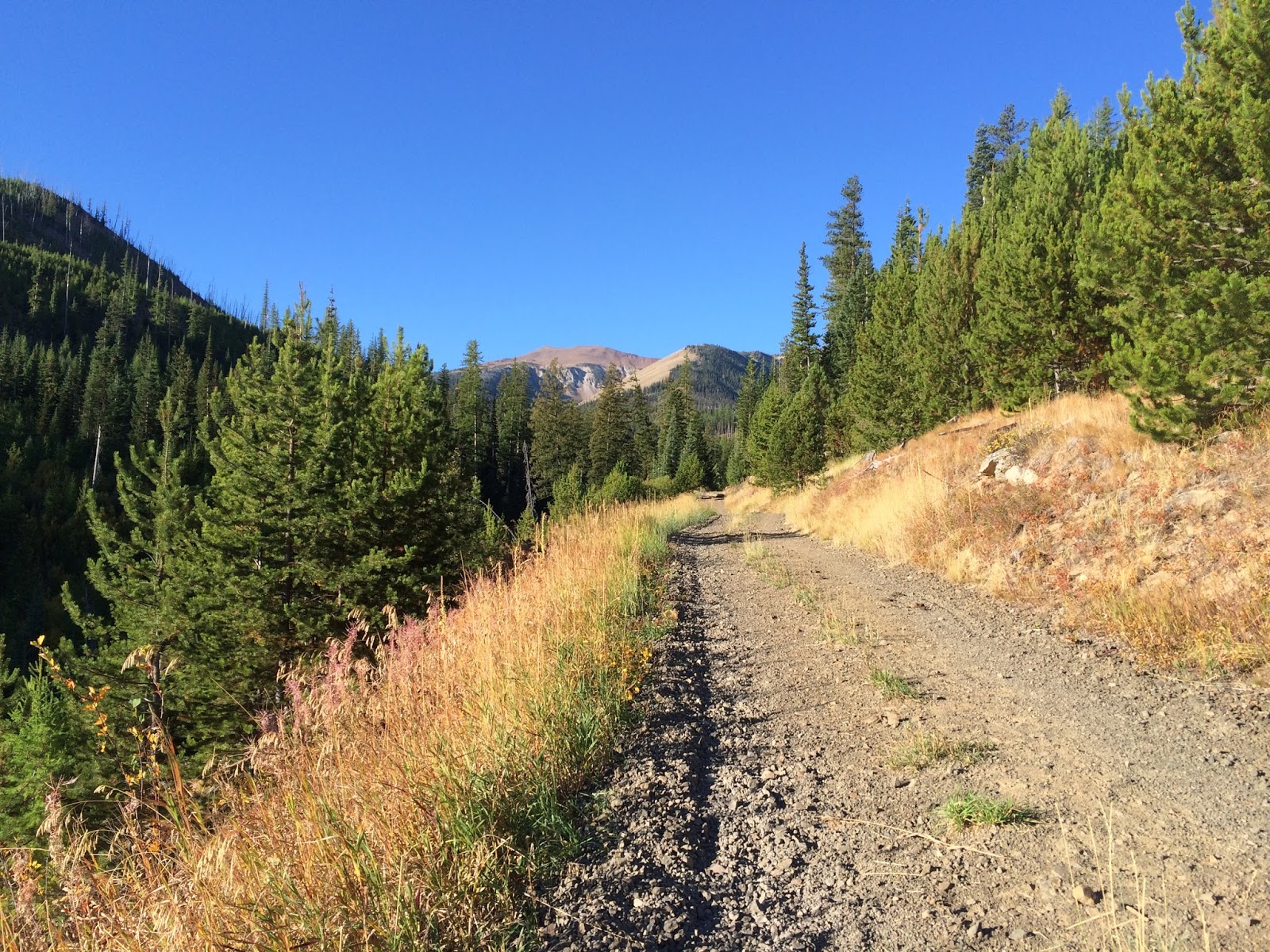 Beginning of the trail

We had hiked for about a mile when I saw a bird flush up ahead.  A Ruffed Grouse had been down by a stream crossing and flew into the dense and dark trees when it saw us.  I took it as a good sign that we had gone the right way.  Farther along the trail I stopped to drink some water and hand out dog cookies. 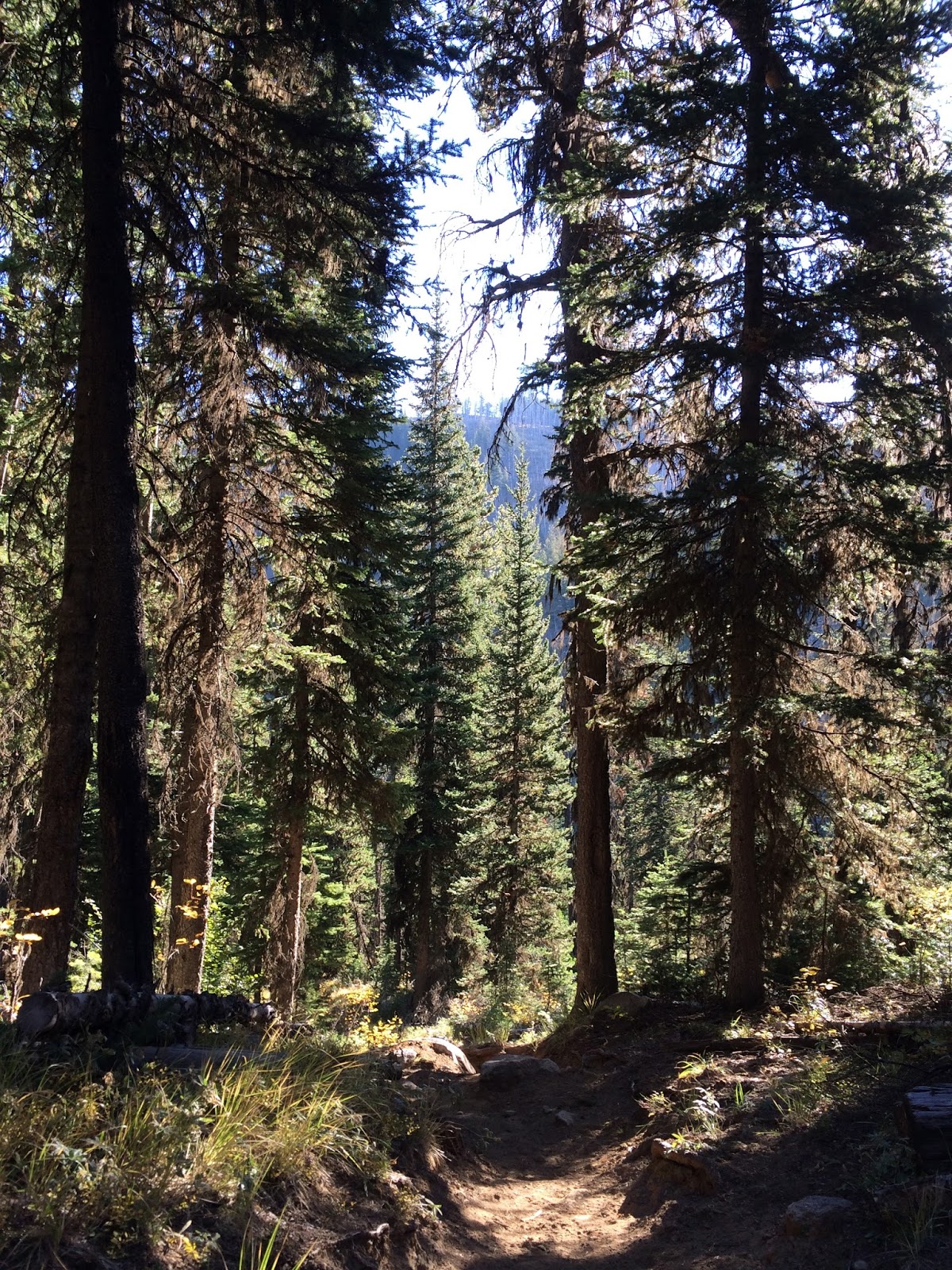 It was lovely up there.  We kept walking maybe a couple minutes longer when we all caught sight of three birds on the trail ahead.  Grouse! 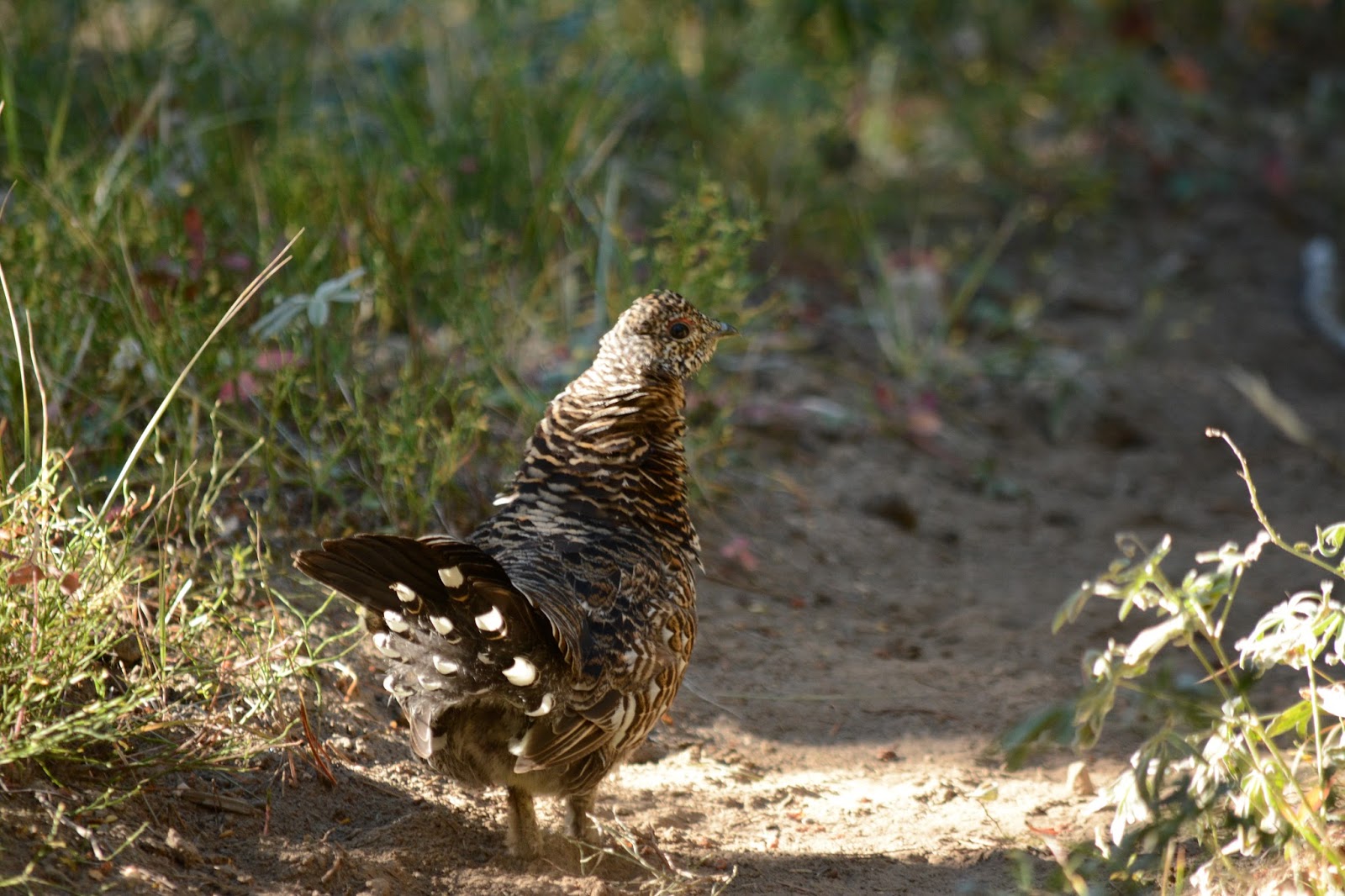 But which kind?  I'll admit I had not done much studying beforehand.  In my head, Spruce Grouse were obvious because they had lots of black on them and red eyebrows, so I immediately assumed these were Dusky, the other option since they were obviously not Ruffed. 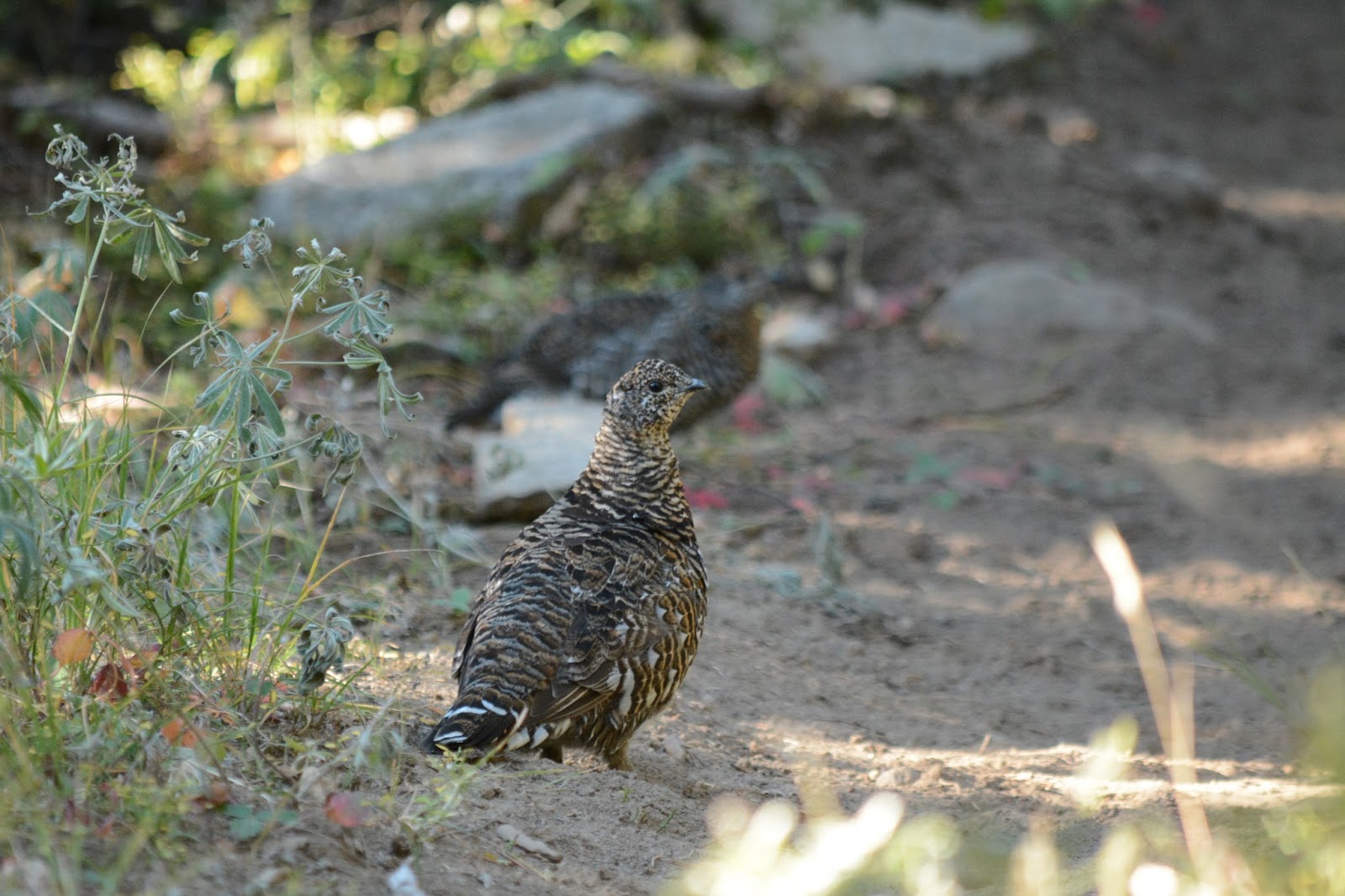 When I got home and started looking at photos I got confused- their tails were too short, they had strong barring on their chests.  They didn't seem like Dusky after all.  I sent photos to Rhett for a second opinion, and he agreed that they were indeed Spruce Grouse! 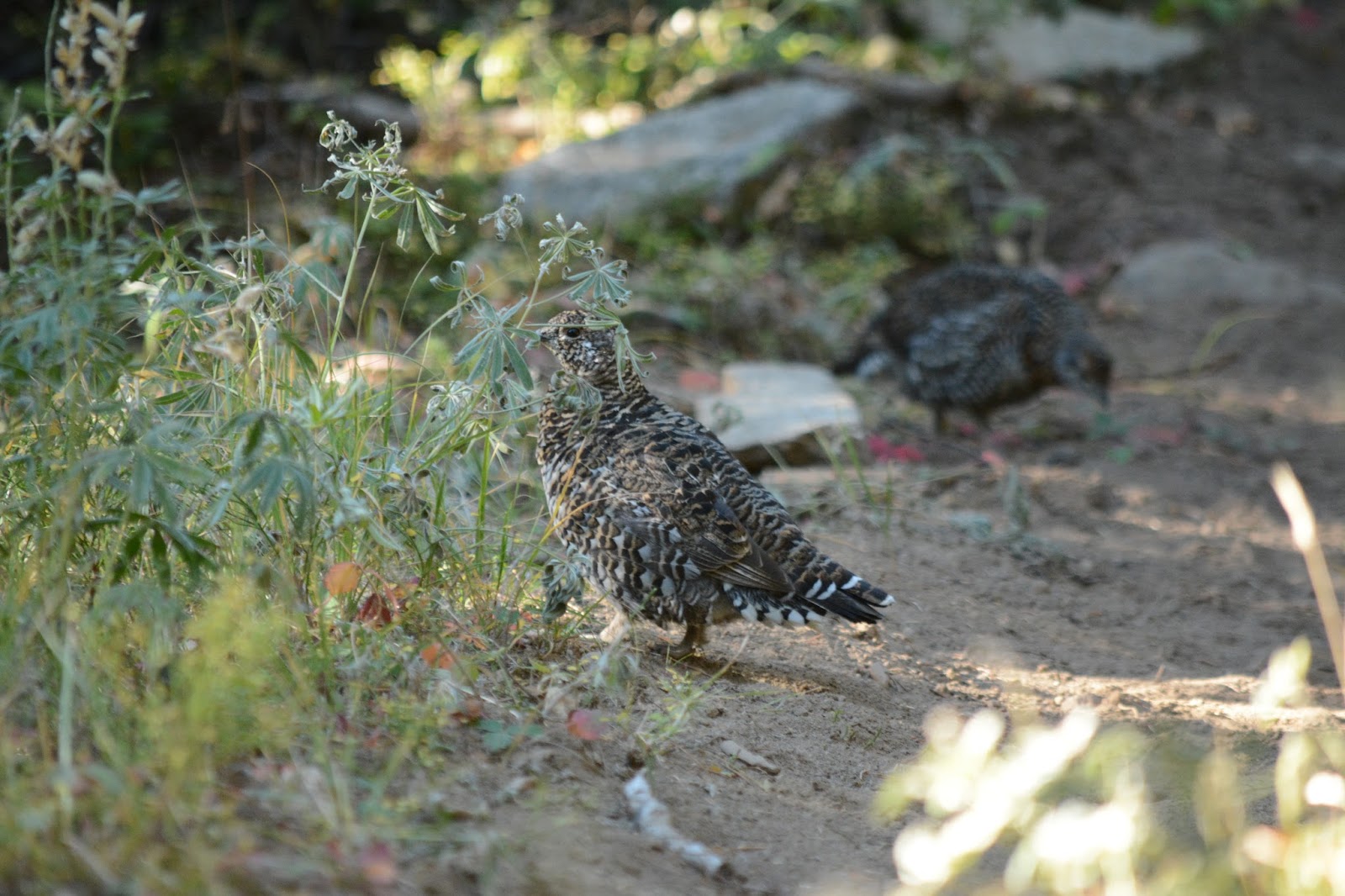 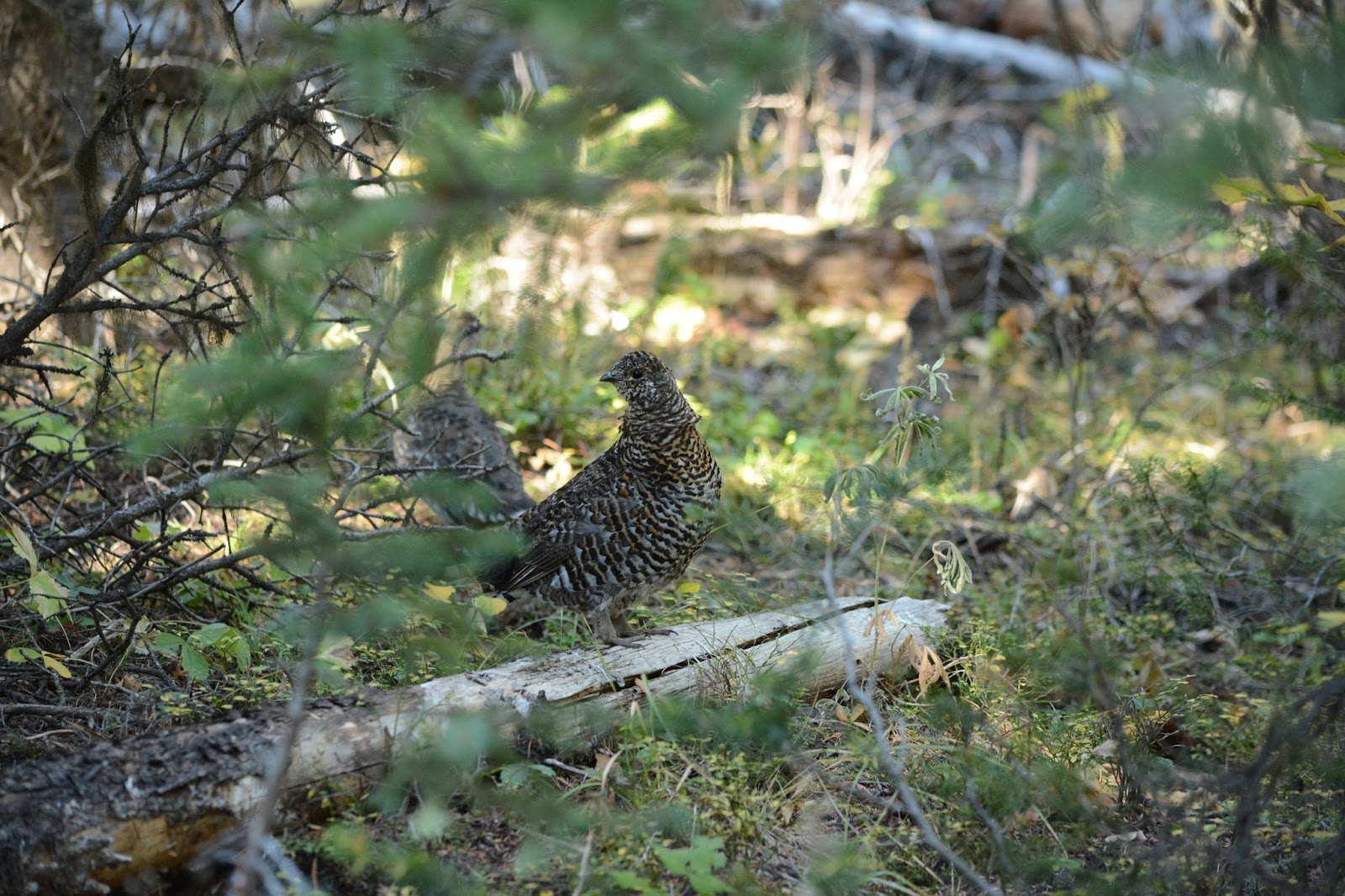 The birds slowly wandered off the trail and into the trees.  We hiked a bit further but found no more interesting birds.

After that hike we drove back to Enterprise, checking out Wallowa Lake and Pete's Pond along the way.  Nothing too exciting there, and so on to Golf Course Road. 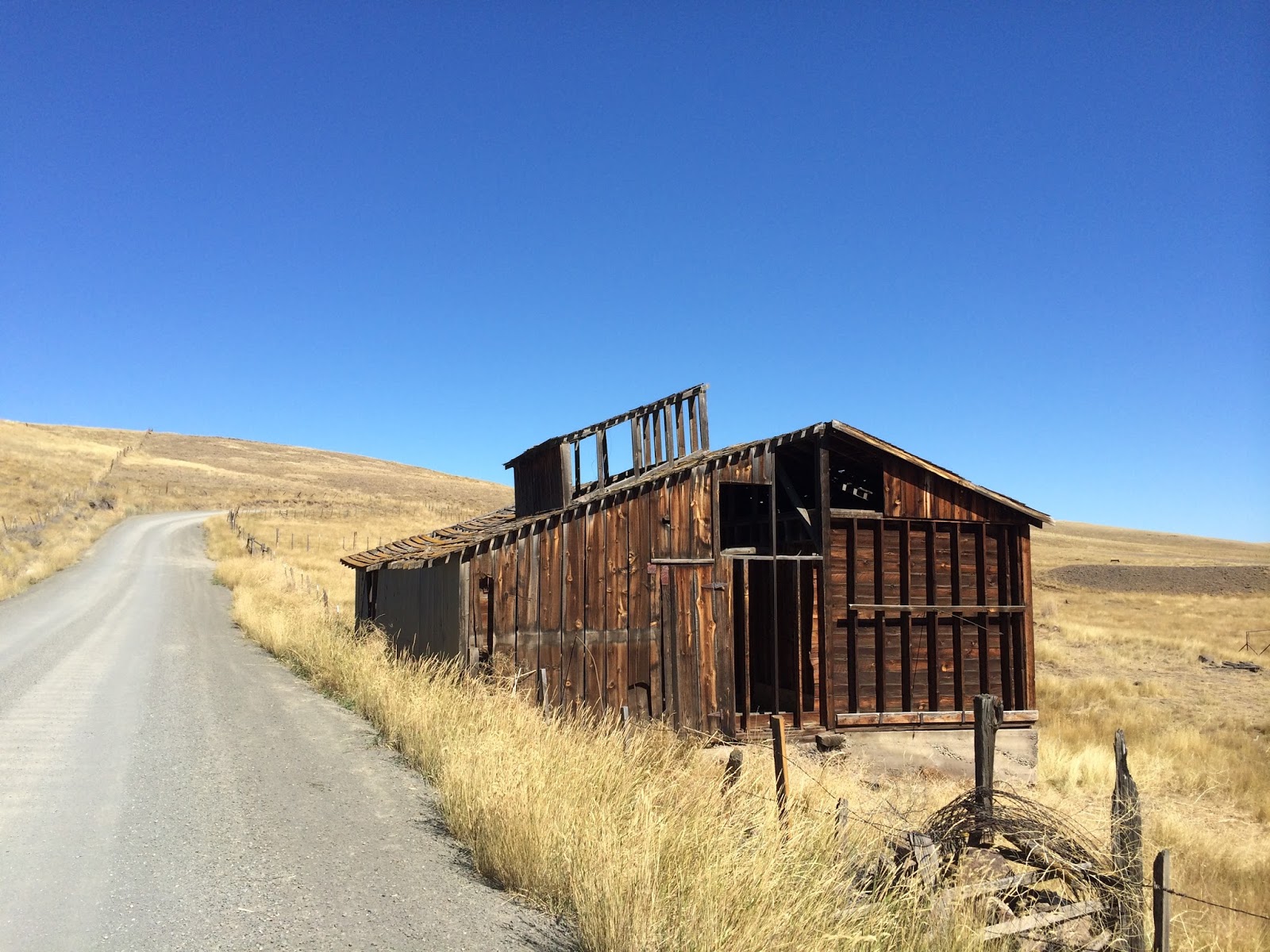 I interrupted a secret rendezvous between a White-crowned Sparrow and a Black-billed Magpie here.  I wonder if there's a secret lovechild somewhere.  The fence along the road was occupied by Savannah Sparrows, Western Meadowlarks, and American Pipits. 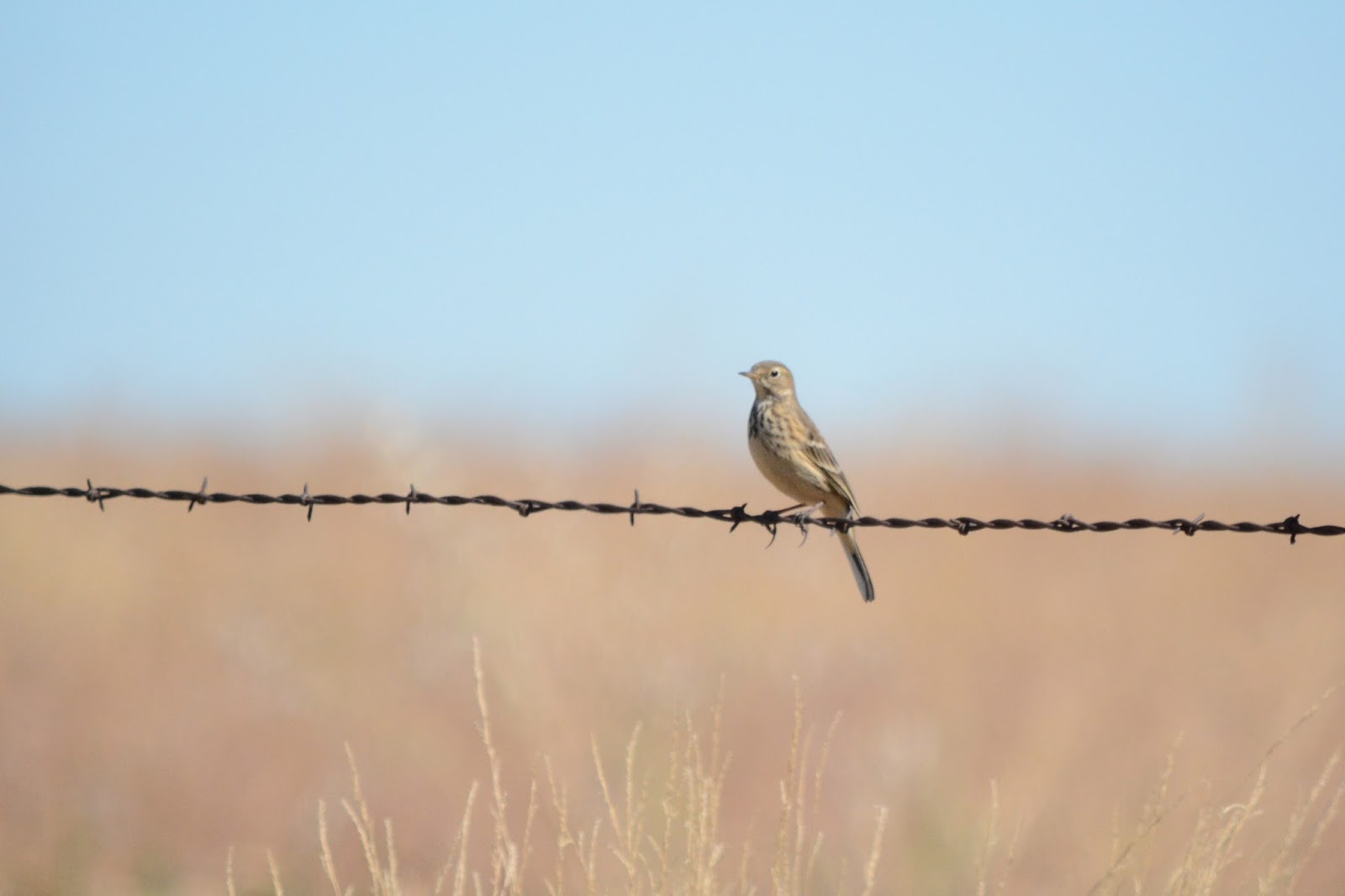 I failed to find any Gray Partridges here, only a couple of young California Quail. 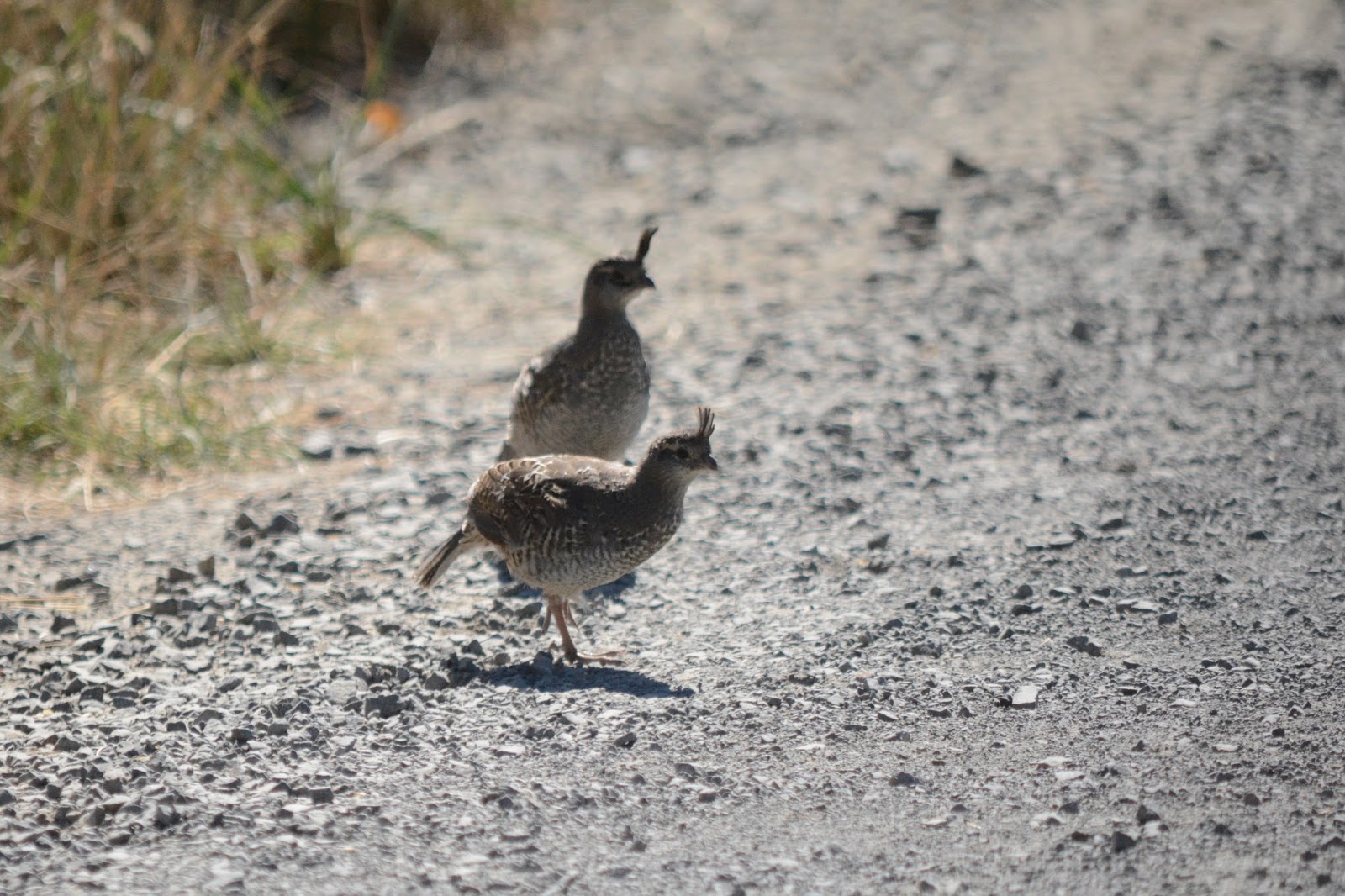 And that's about it from my trip.  It's always fun to explore new territory, and even more fun when you get a lifer out of the deal.  Of course I want to return in winter (Bohemian Waxwings, Common Redpolls, GYRFALCON) and spring (Great Gray Owls, Gray Catbirds, Veeries), but for now I am content with my new chicken.  Good times!! 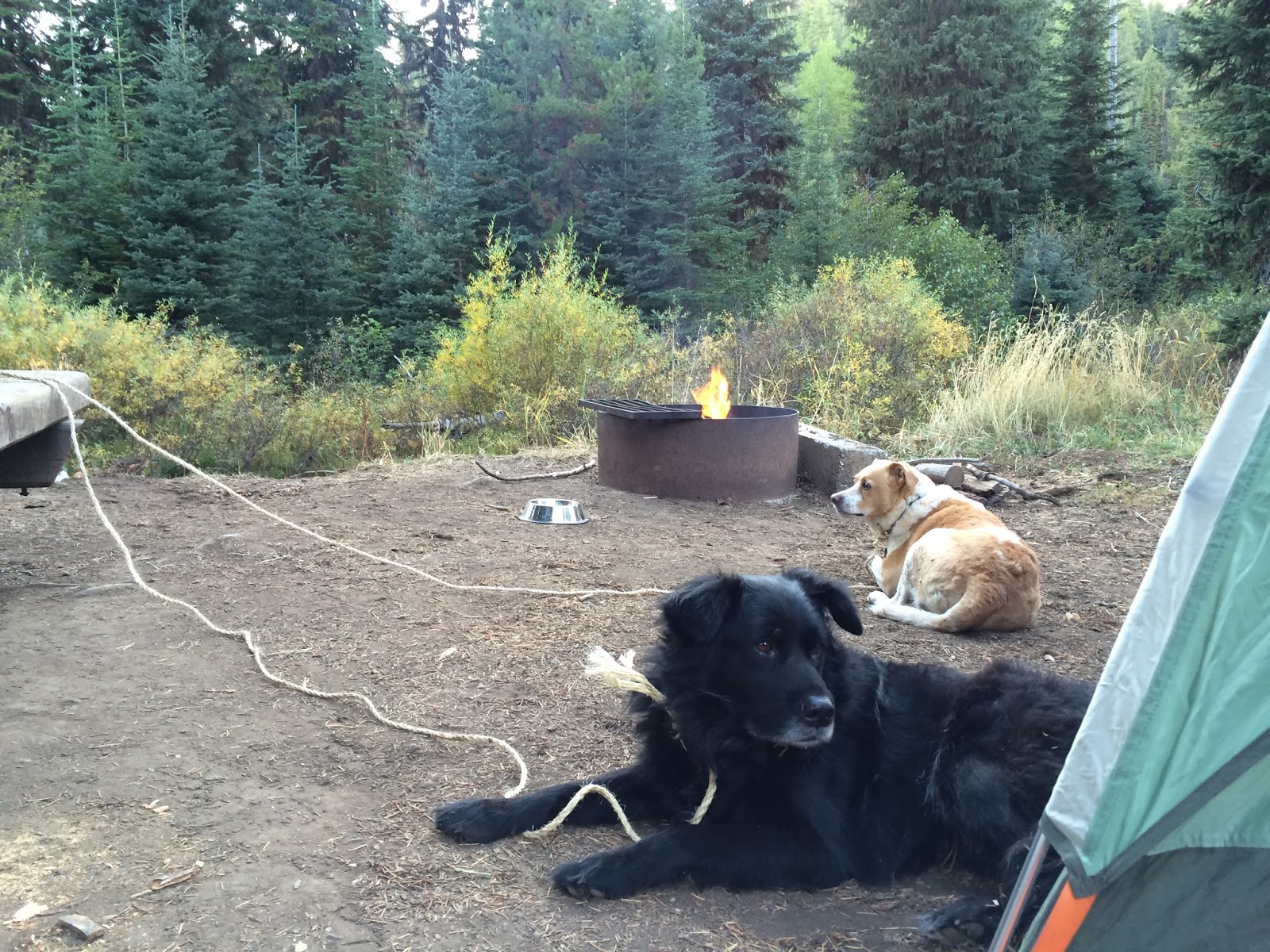