on January 22, 2015
Oh man have I been slacking on my motorless list so far this year.  I haven't even dusted off my bike yet- all my birds are from dog walks and the yard.  LAME.  Hopefully I can fix that on my days off coming up, but till then, here is what I have to show for myself. 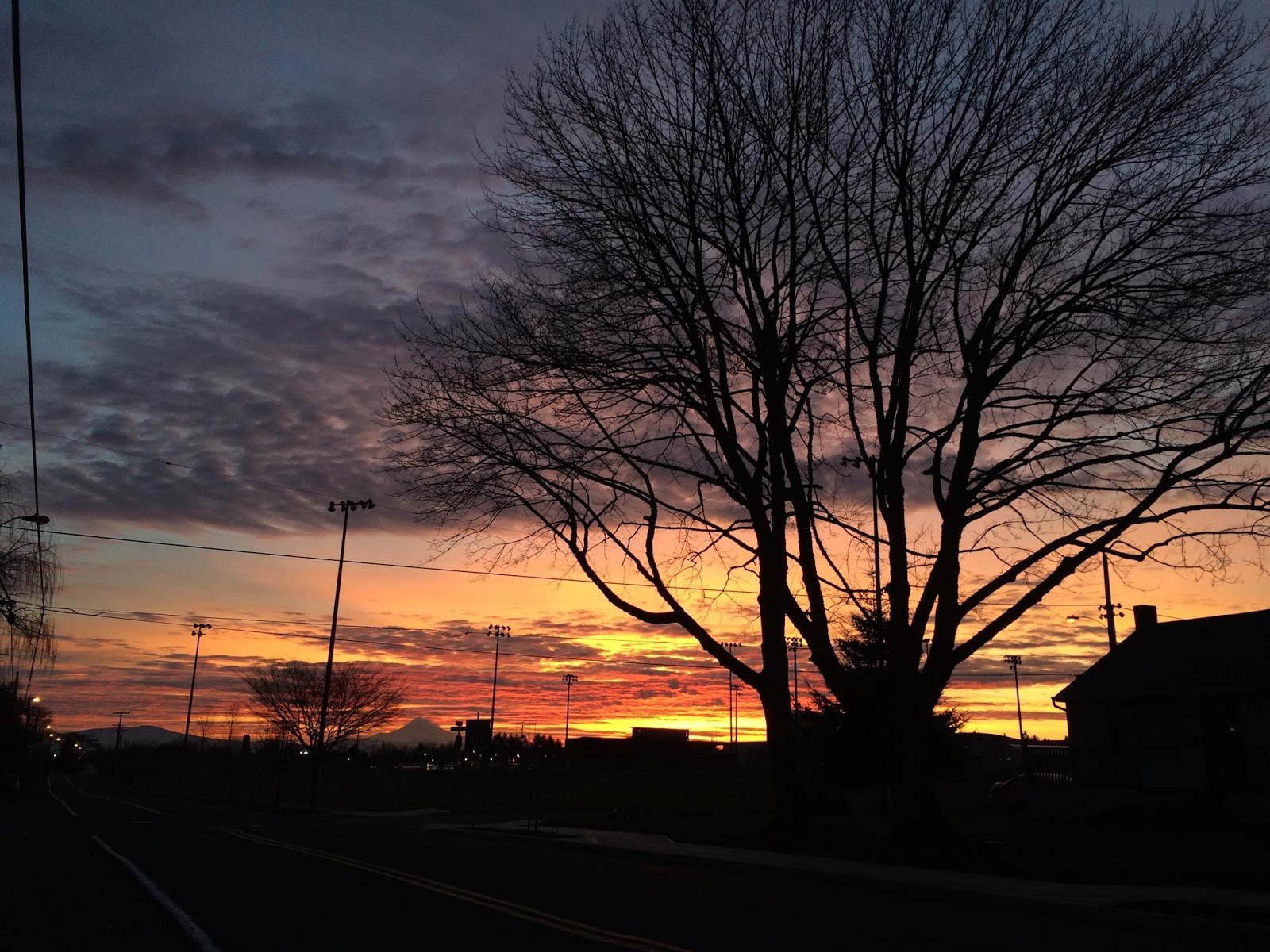 My drive home from work this month has coincided with the time of day that I have always called (in my head, not to anyone else) when the crows fly.   I started noticing the evening flight of crows a few years ago and have since really enjoyed watching this sort of low budget spectacle.  Having this occur while stuck in traffic really makes things better. 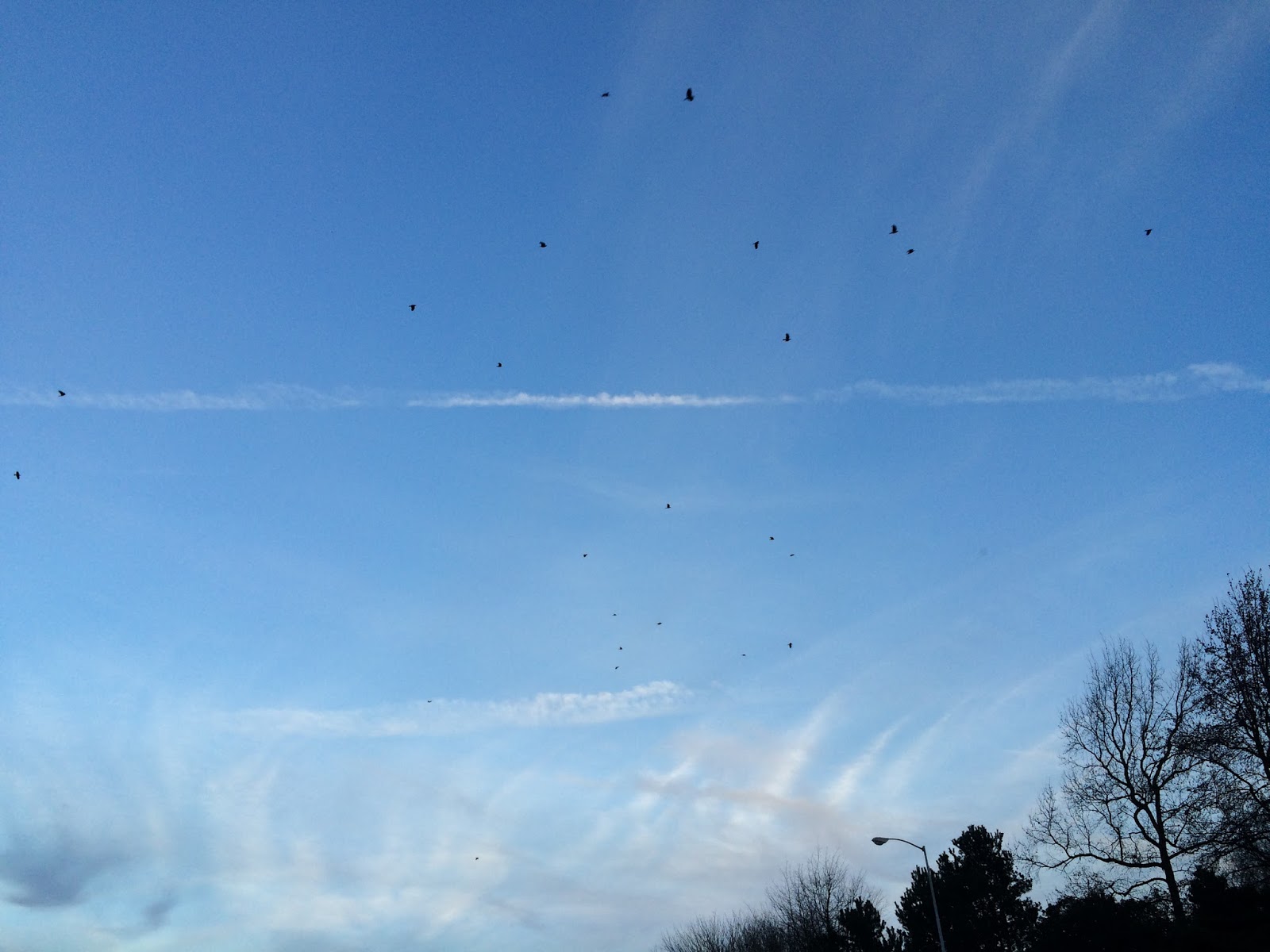 I have heard rumors of a big crow roost downtown, and perhaps that is where these birds are heading.  They fly over my backyard sometimes, passing in pairs, sixes, dozens, quietly and with purpose.  It's calming.

In yard news, I have had all of my ash tree cleaned up and removed, and the fence finally fixed.  There has not been a huge impact on bird numbers thankfully.  My Anna's Hummingbird females still visit daily, and chase away any males that dare show up. 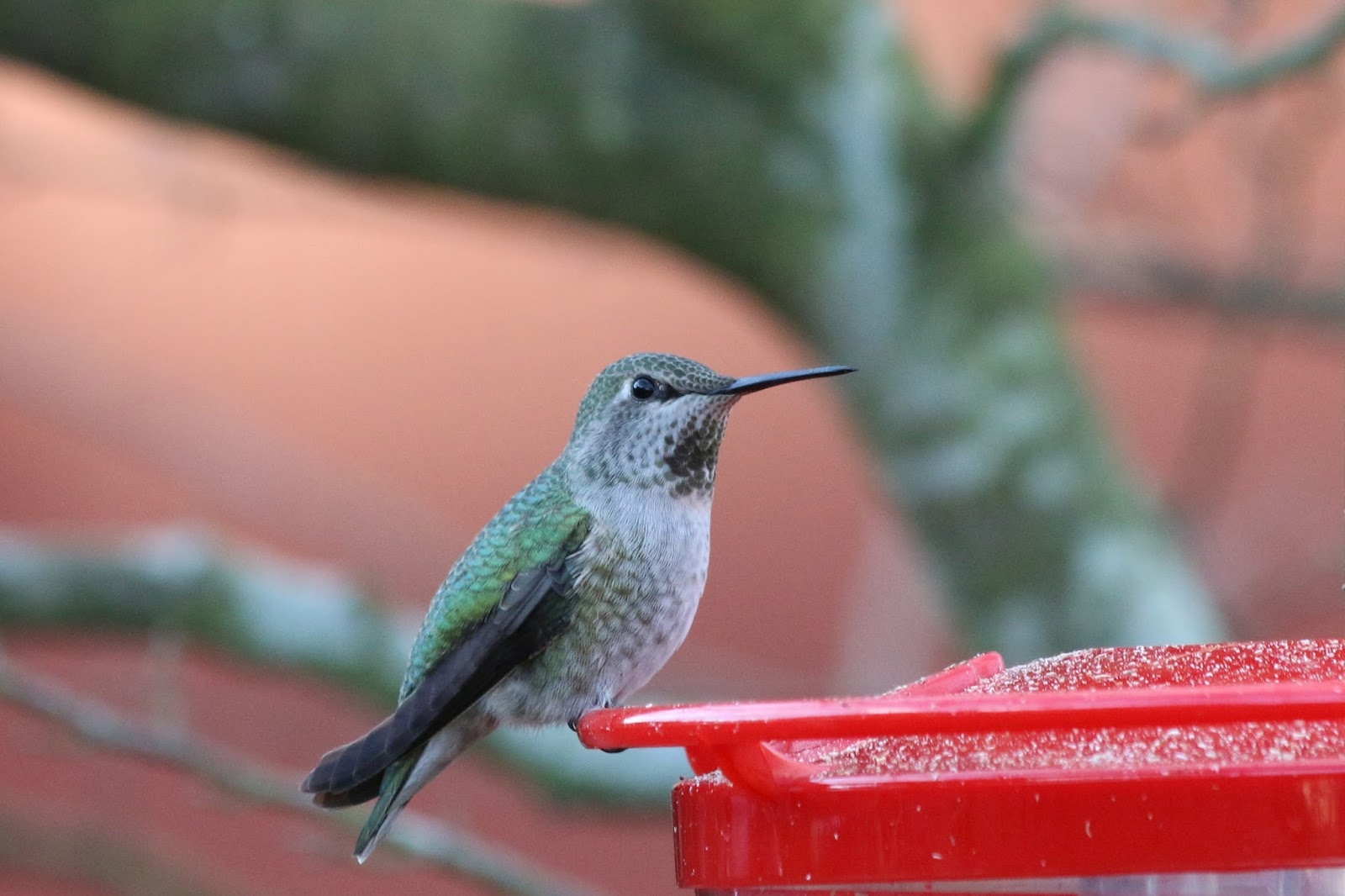 Last weekend a new yard bird showed up in the pouring rain.  He left quickly and I feared I had imagined it, but he came back in the sunshine on Tuesday.  A slate-colored junco! 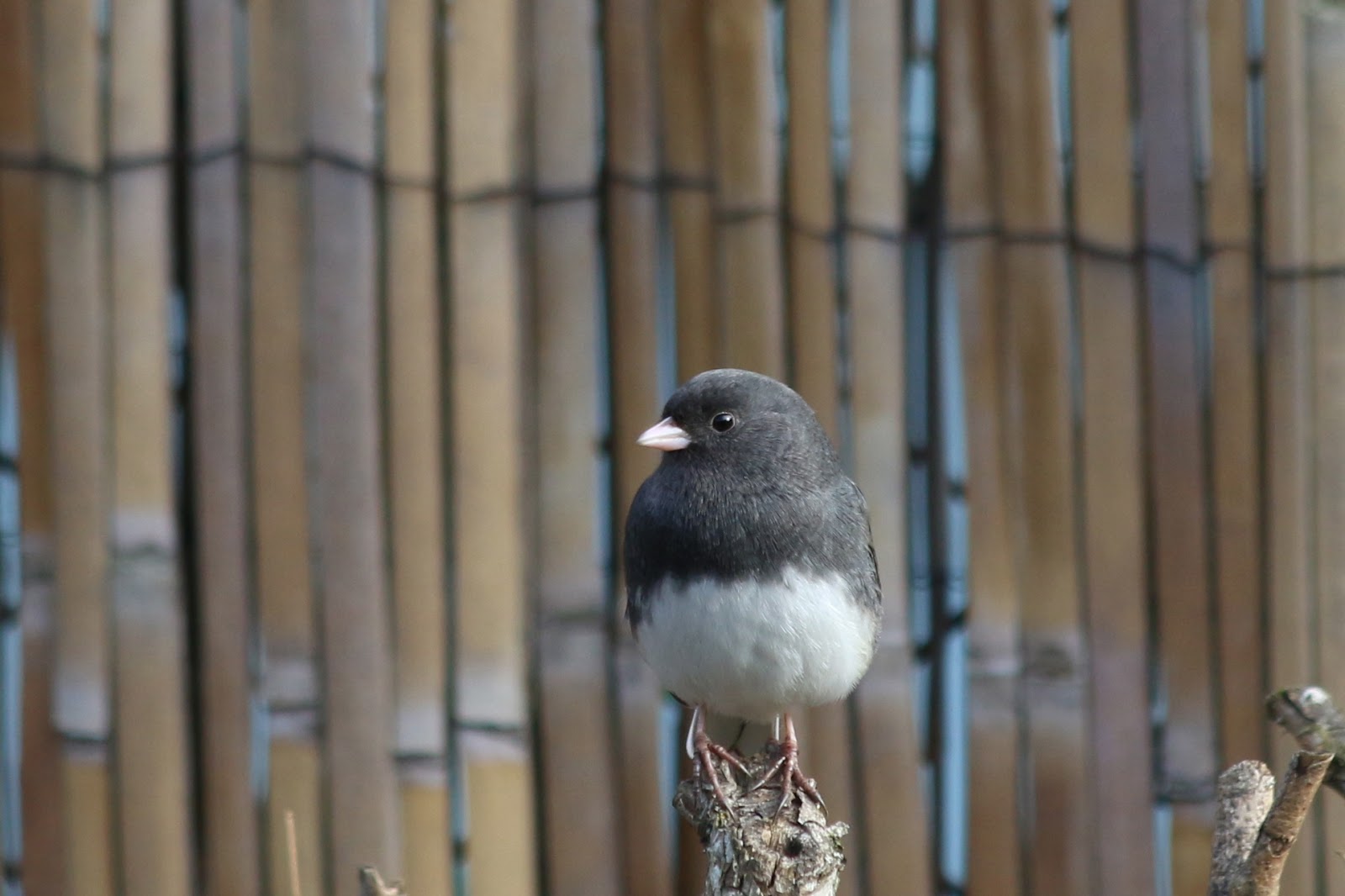 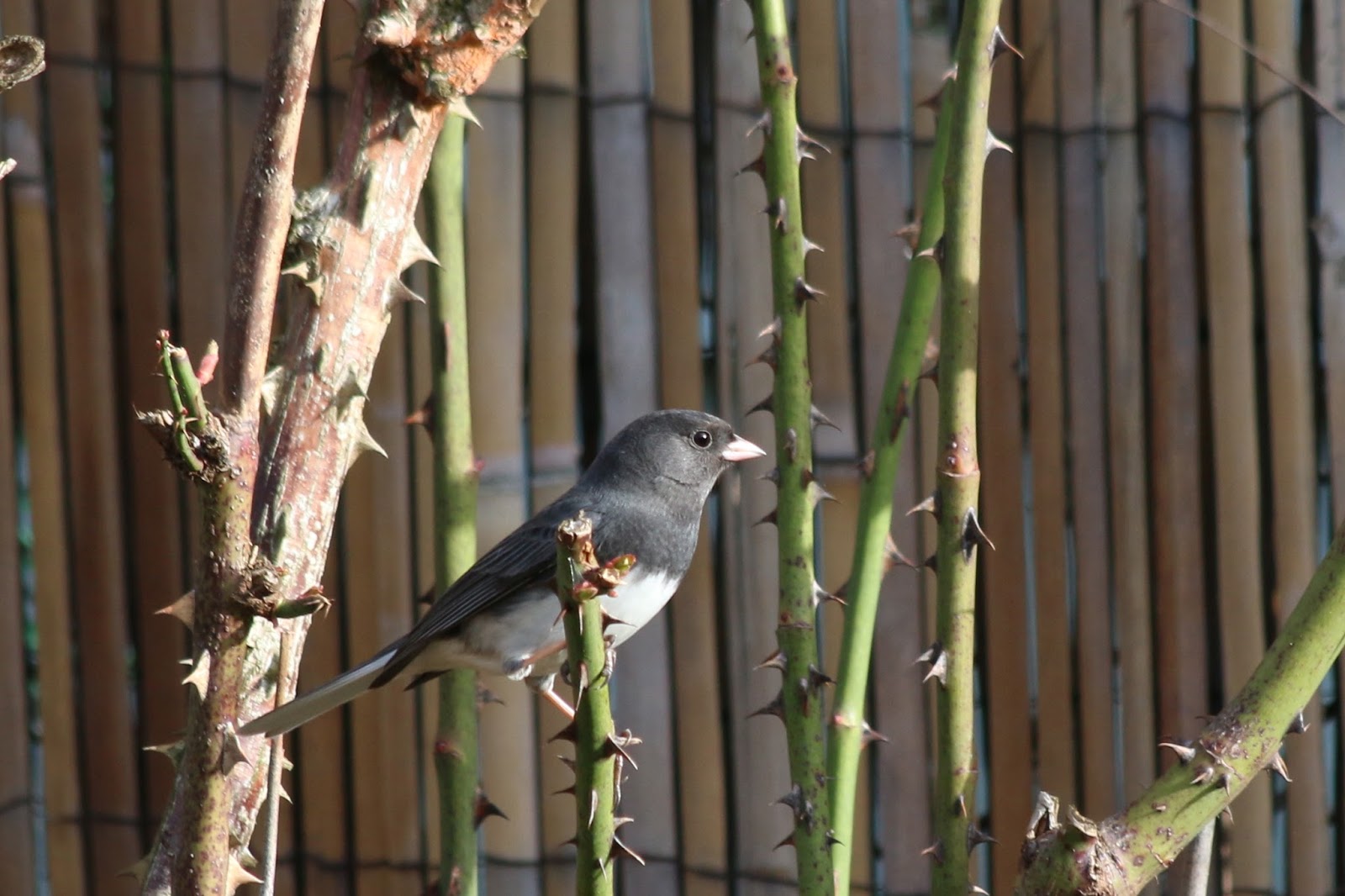 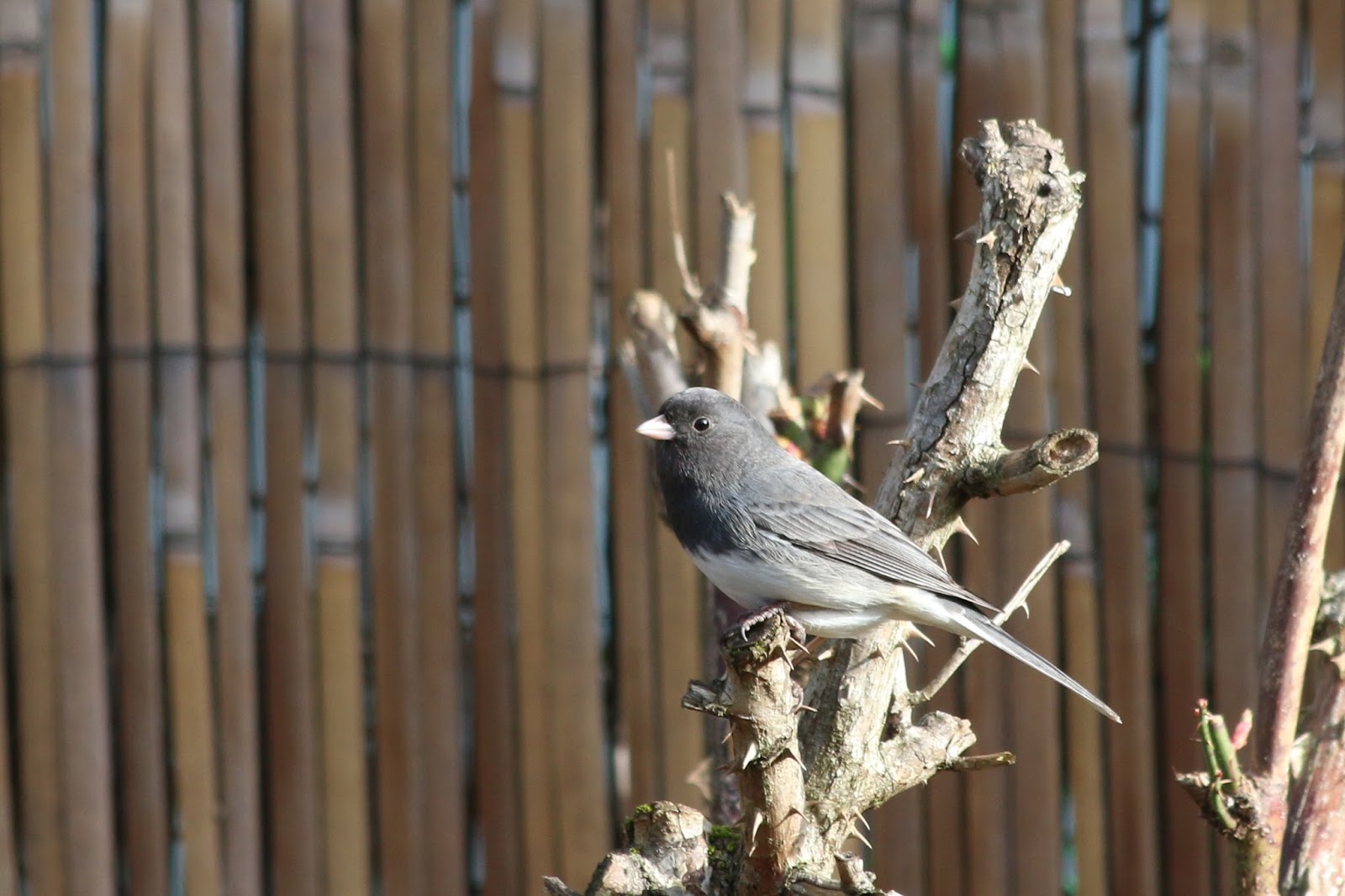 The high school near my house has helped add some quality gulls to my motorless list.  My attempts to scope them from my living room (for my yard list of course) have mostly failed, but I will keep trying. 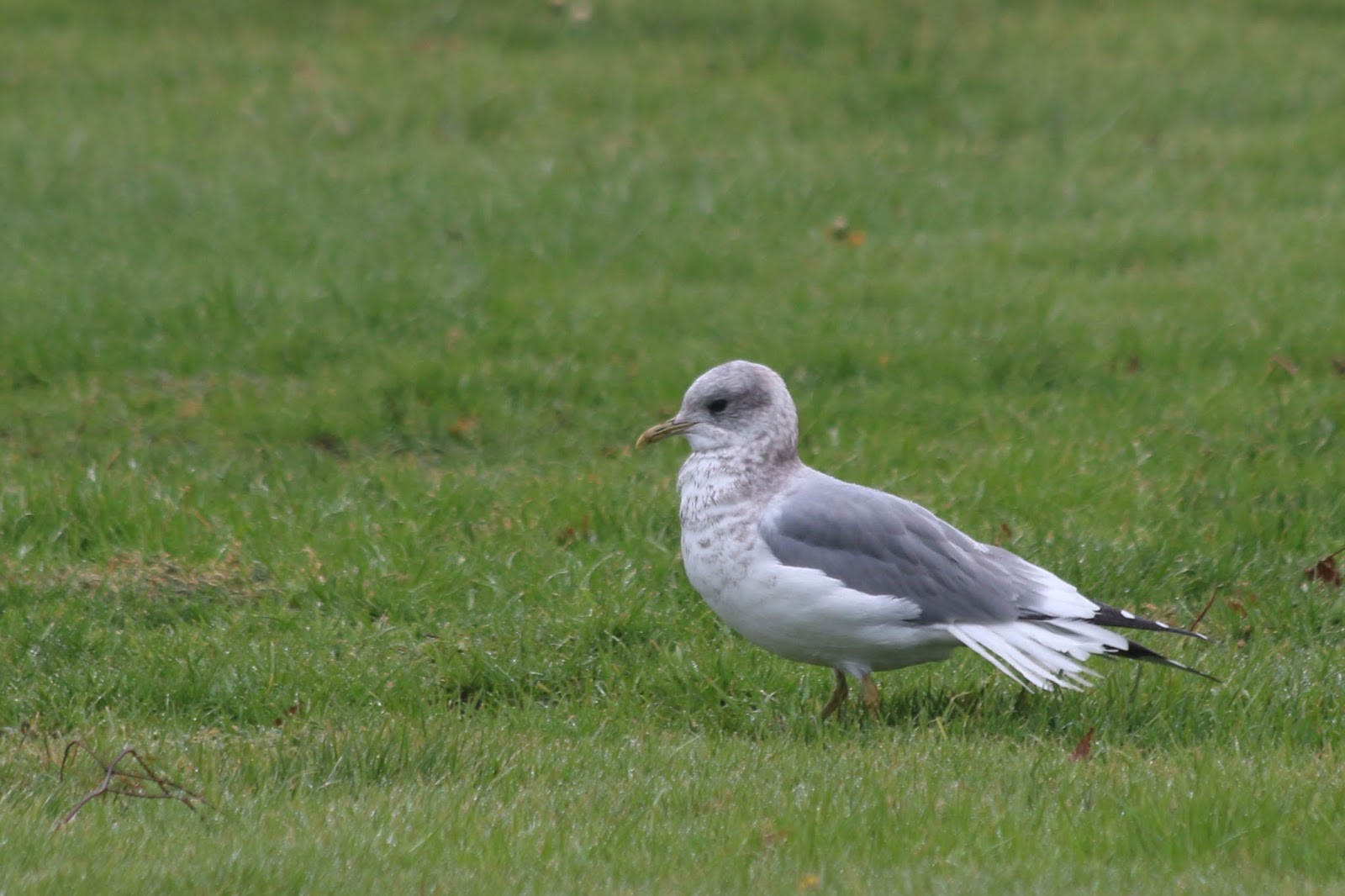 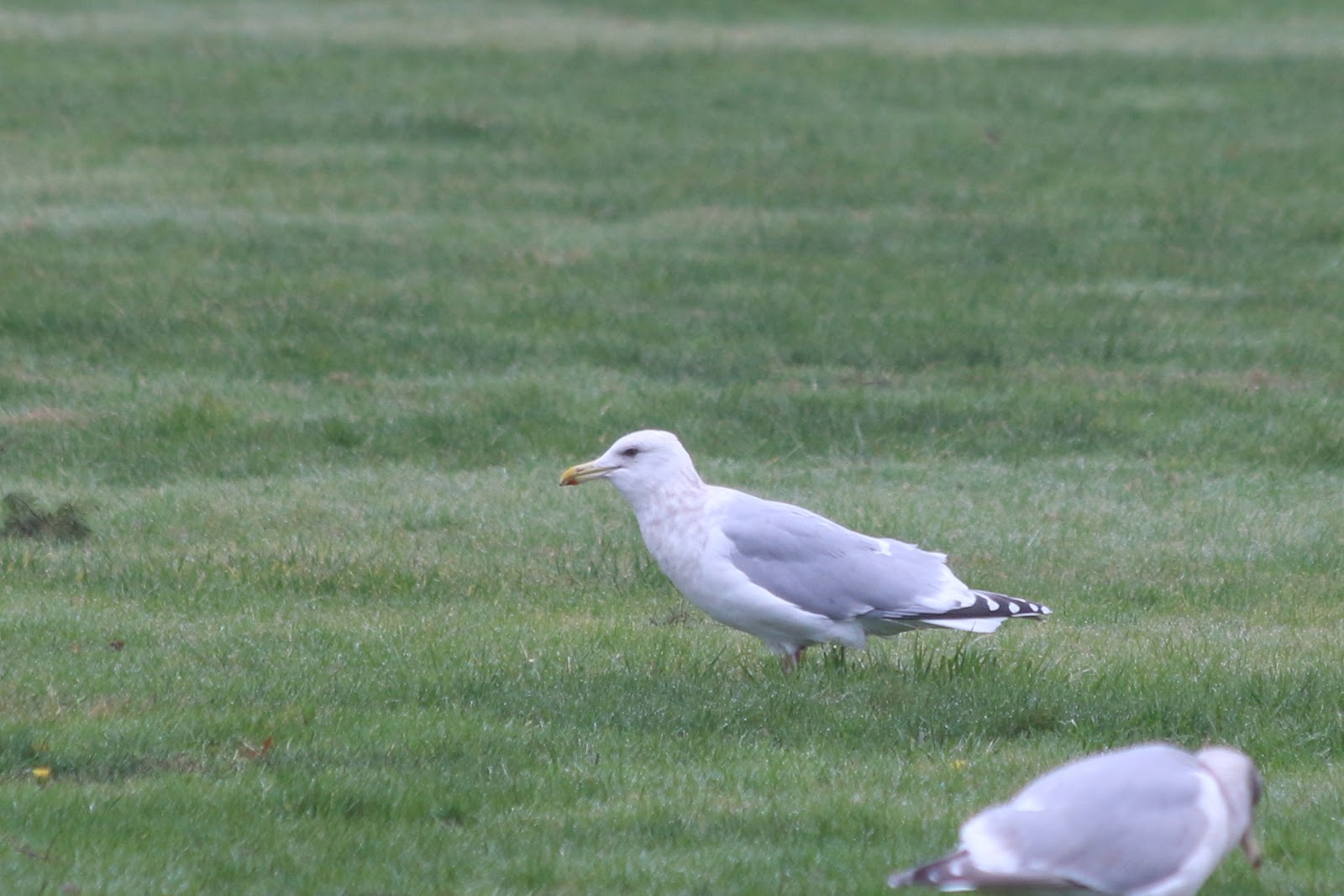 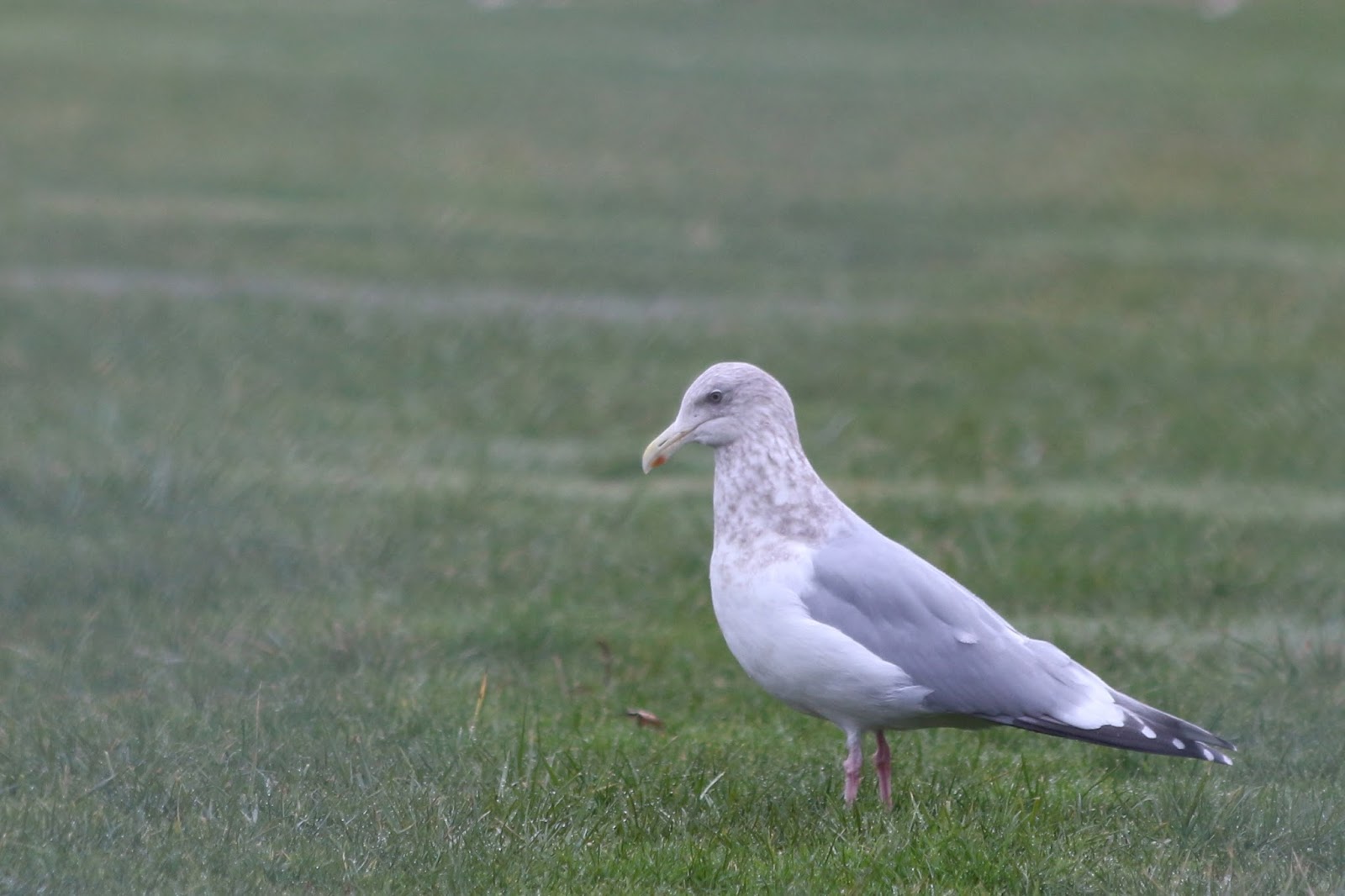 
Yesterday morning I peaked out my blinds to see the sky turning some brilliant colors.  I checked the sunrise time and realized I had exactly enough time to make it up to the river for it, so the dogs and I took off walking.  Unfortunately as we walked, the cold ground was feeling the heat and a fog rose up washing out the vibrant pinks and oranges. 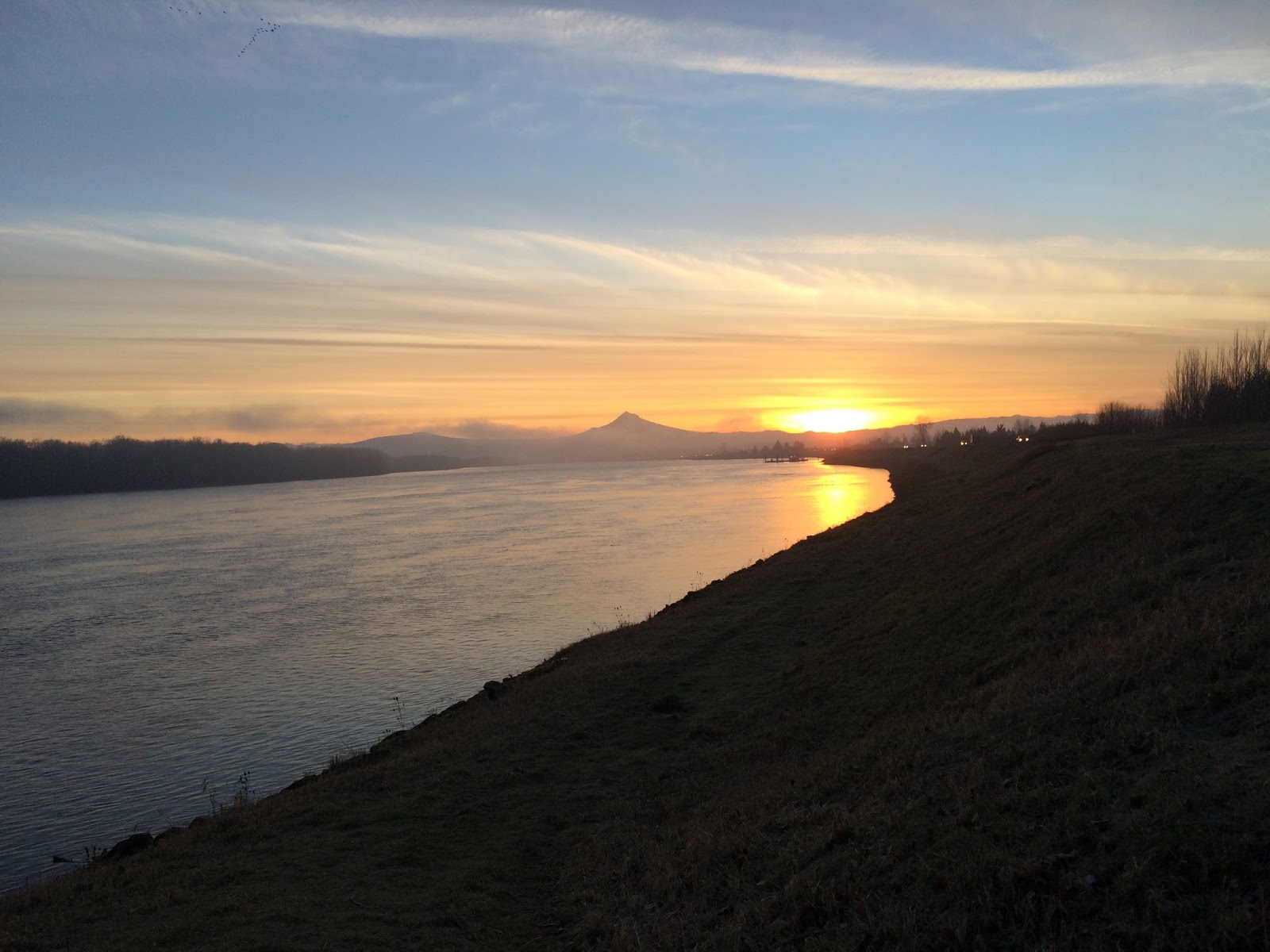 The sun rose as we passed under the Glen Jackson bridge and I tried to talk myself out of my disappointment about the muted sky.  It's fine, I told myself, everything happens for a reason.   We approached our usual destination, a little spot where you can walk right up to the water.  We must have walked there a hundred times before.

I saw something white through the grass, probably a Coors Light tall boy I thought.  In the summer this place collects a lot of trash so it would not be unusual.  Then the white thing moved.  Oh shit.  That's not a beer can, that's a long-tailed short-tailed weasel. 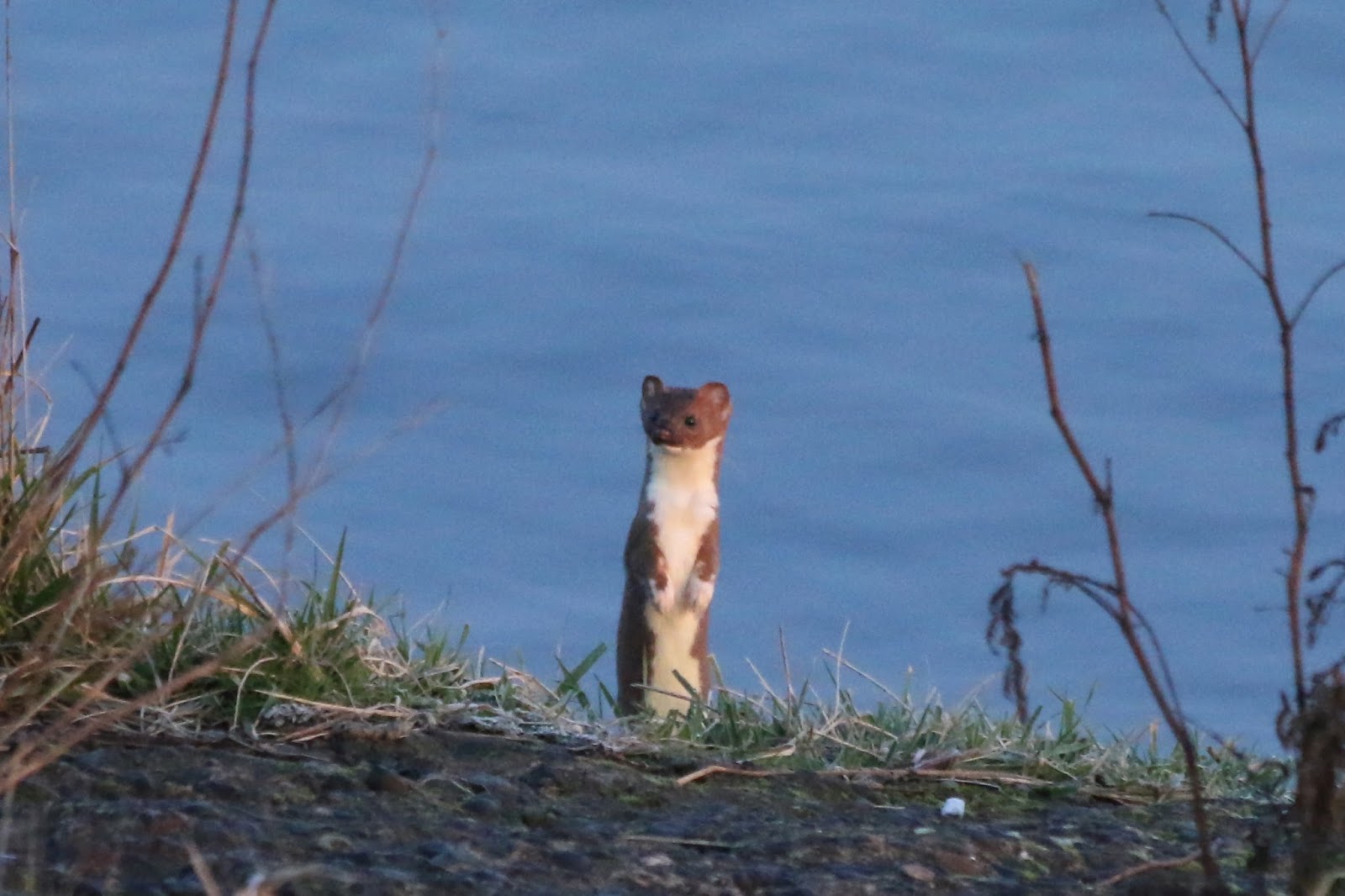 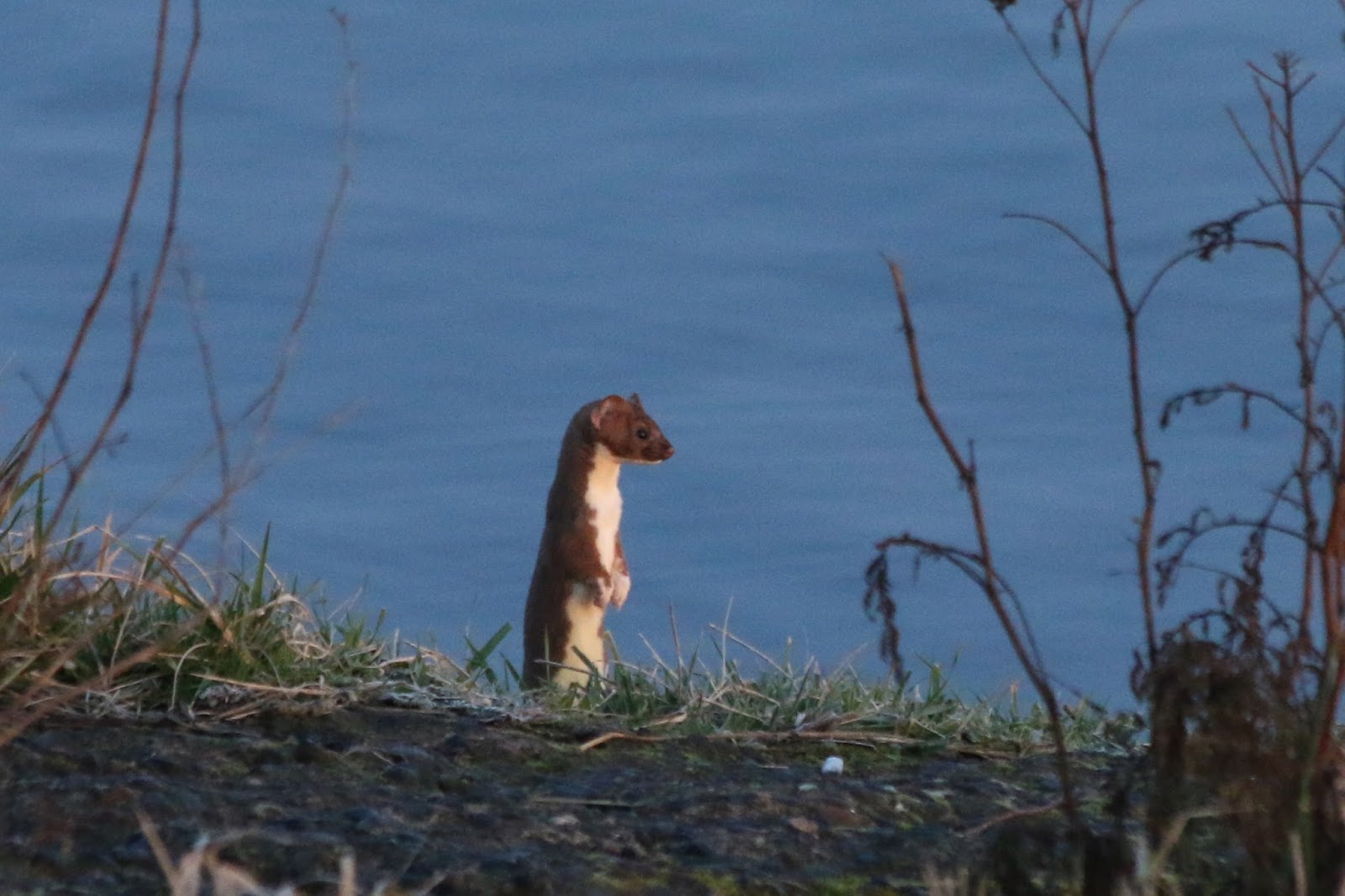 The weasel had a dead rodent.  He ran around trying to decide how to react, finally grabbing the rodent and dashing a short distance before popping back up to reevaluate the situation.  I forgot I had switched to manual focus and most shots are blurry, but they're cool (to me) anyway. 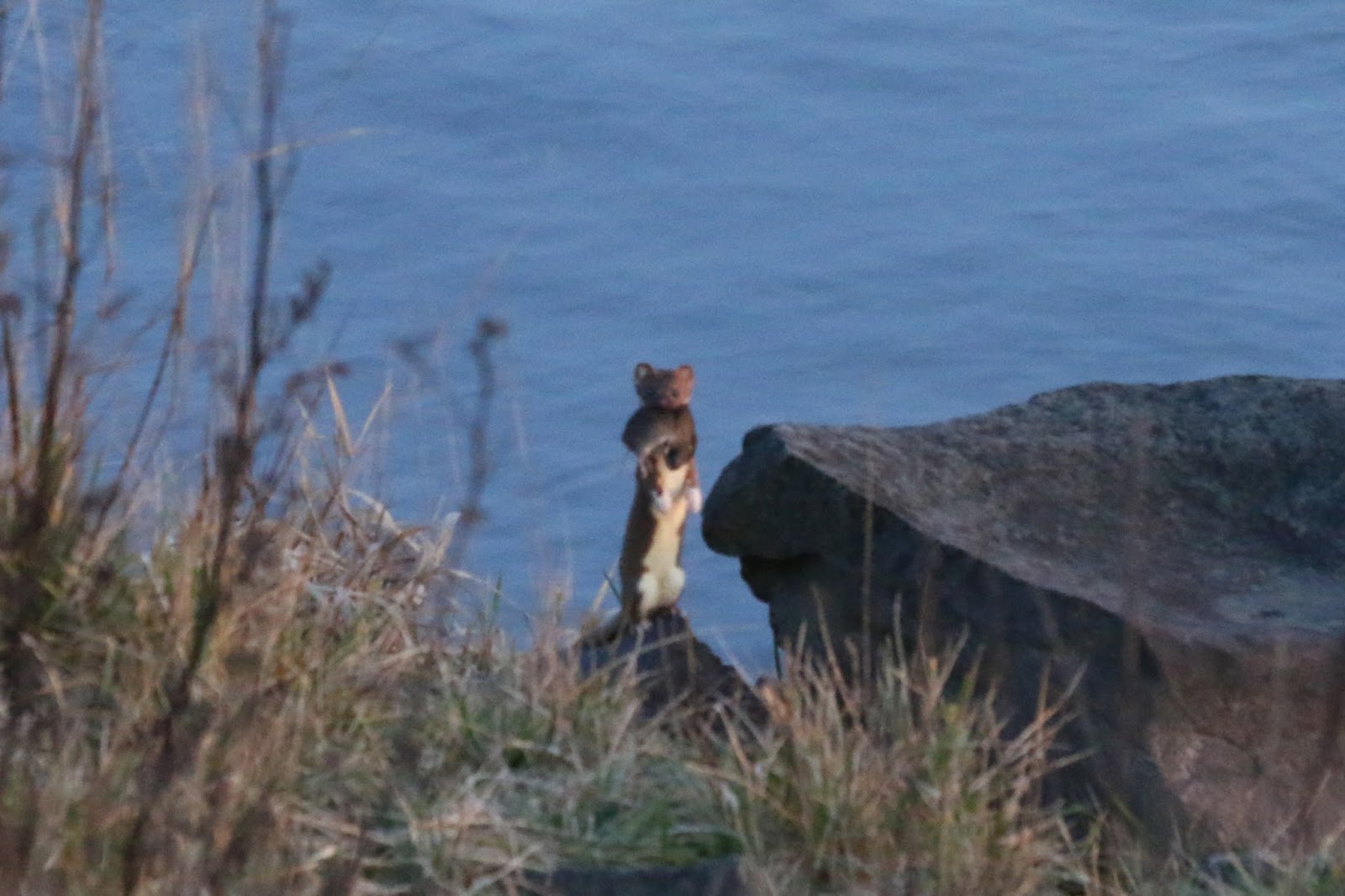 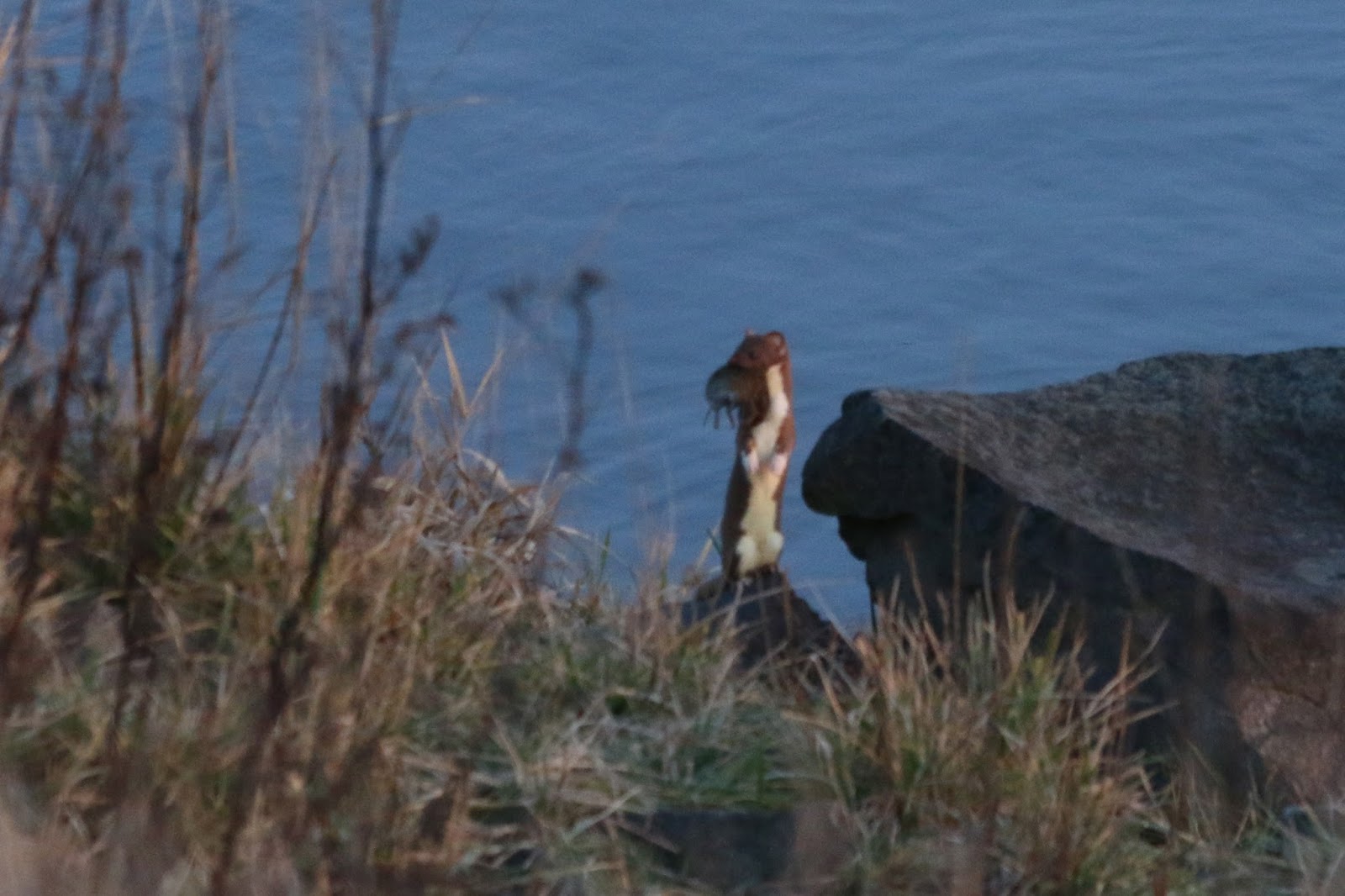 From there the weasel took off running east along the rocks, dropping the rodent along the way. 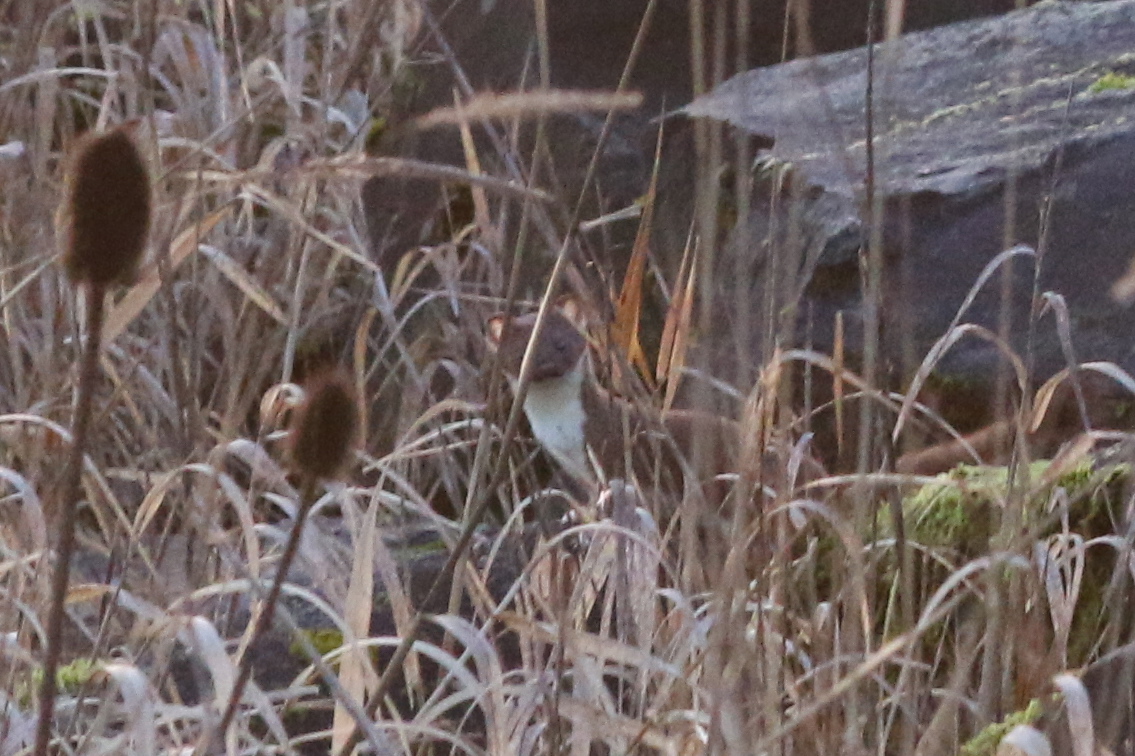 Again, he reevaluated the situation, and decided to run back for the rodent straight towards me. 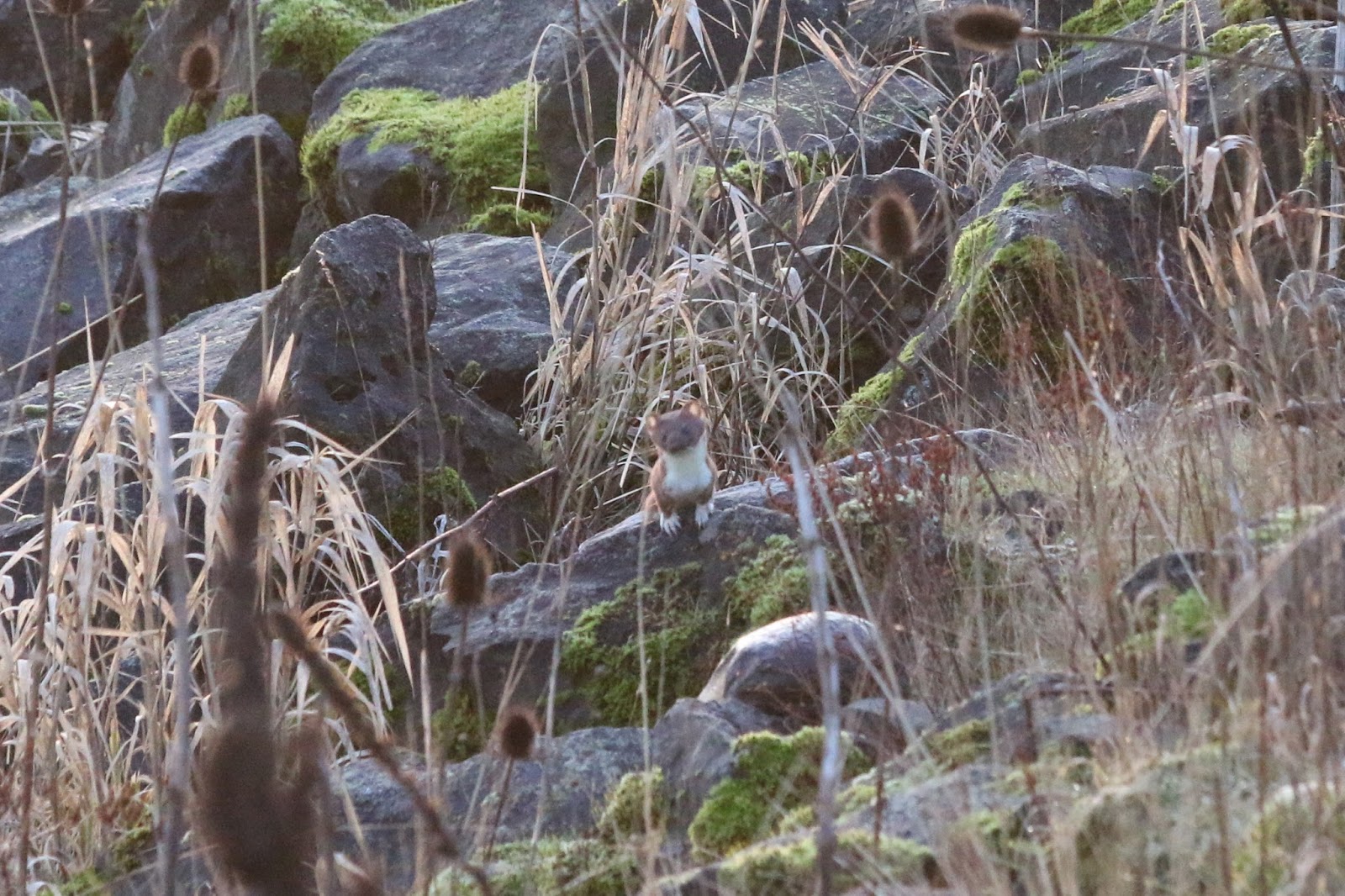 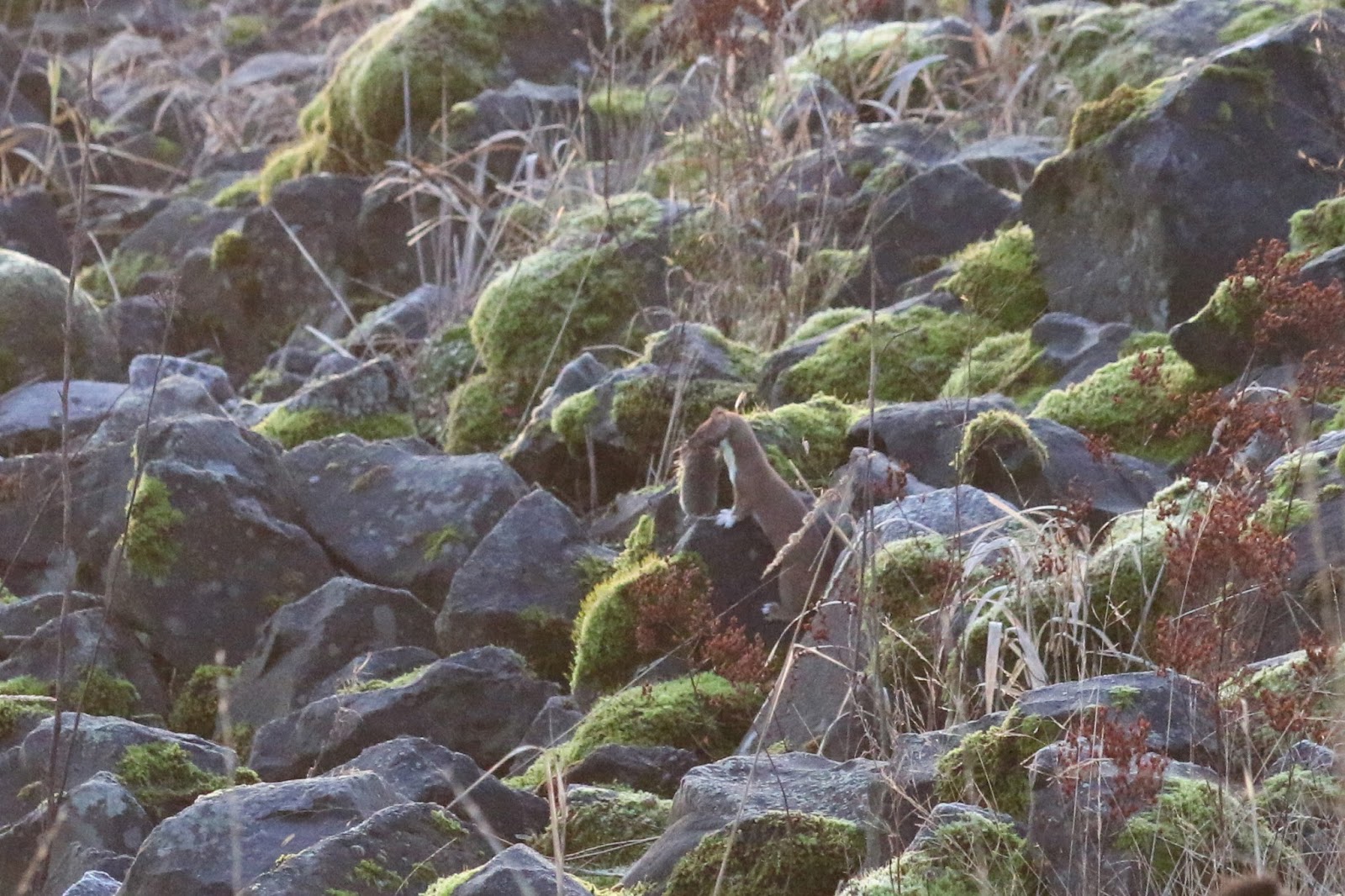 With the rodent dangling, the weasel took off again, heading east into what was becoming pure fog. 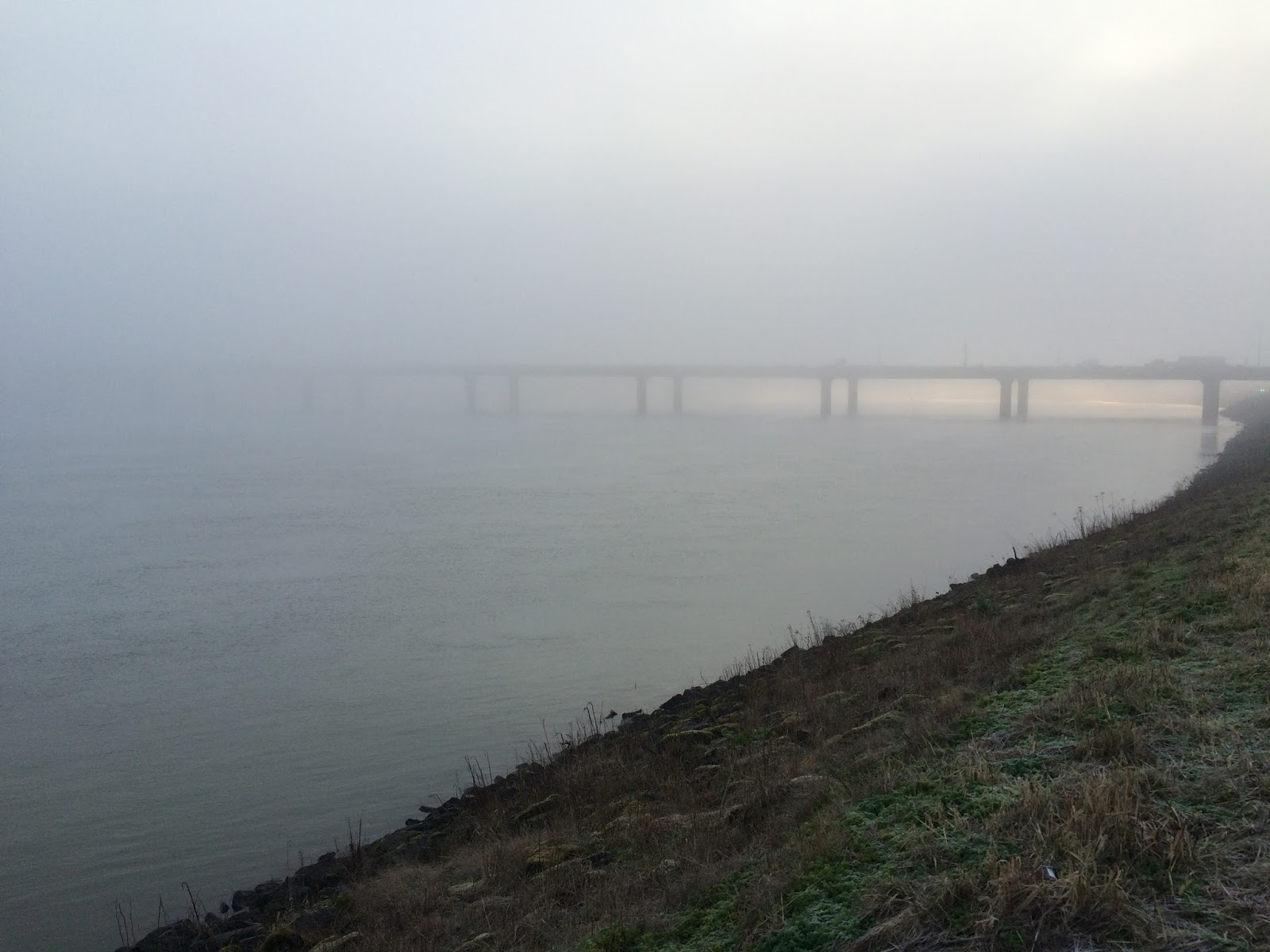 The dogs thoroughly inspected every square inch of the spot where we first saw the weasel while I thought about how amazingly fortunate I had just been and how grateful I was for that initial glance through my blinds at the sunrise.  Yes.  Everything happens for a reason.  Good times.
American Crow Anna's Hummingbird Dark-eyed Junco Mew Gull Thayer's Gull weasel