I spent the beginning of my work week thinking that on my weekend I would drive out to see the Black-headed Gull in Umatilla.  But then people stopped seeing the gull.  Then I decided I would head to Netarts for the Baltimore Oriole.  But then people stopped seeing the oriole.  By the time my weekend came around yesterday I was itching to take a day trip somewhere and a reliable Long-eared Owl in Stanwood, WA became my new target. 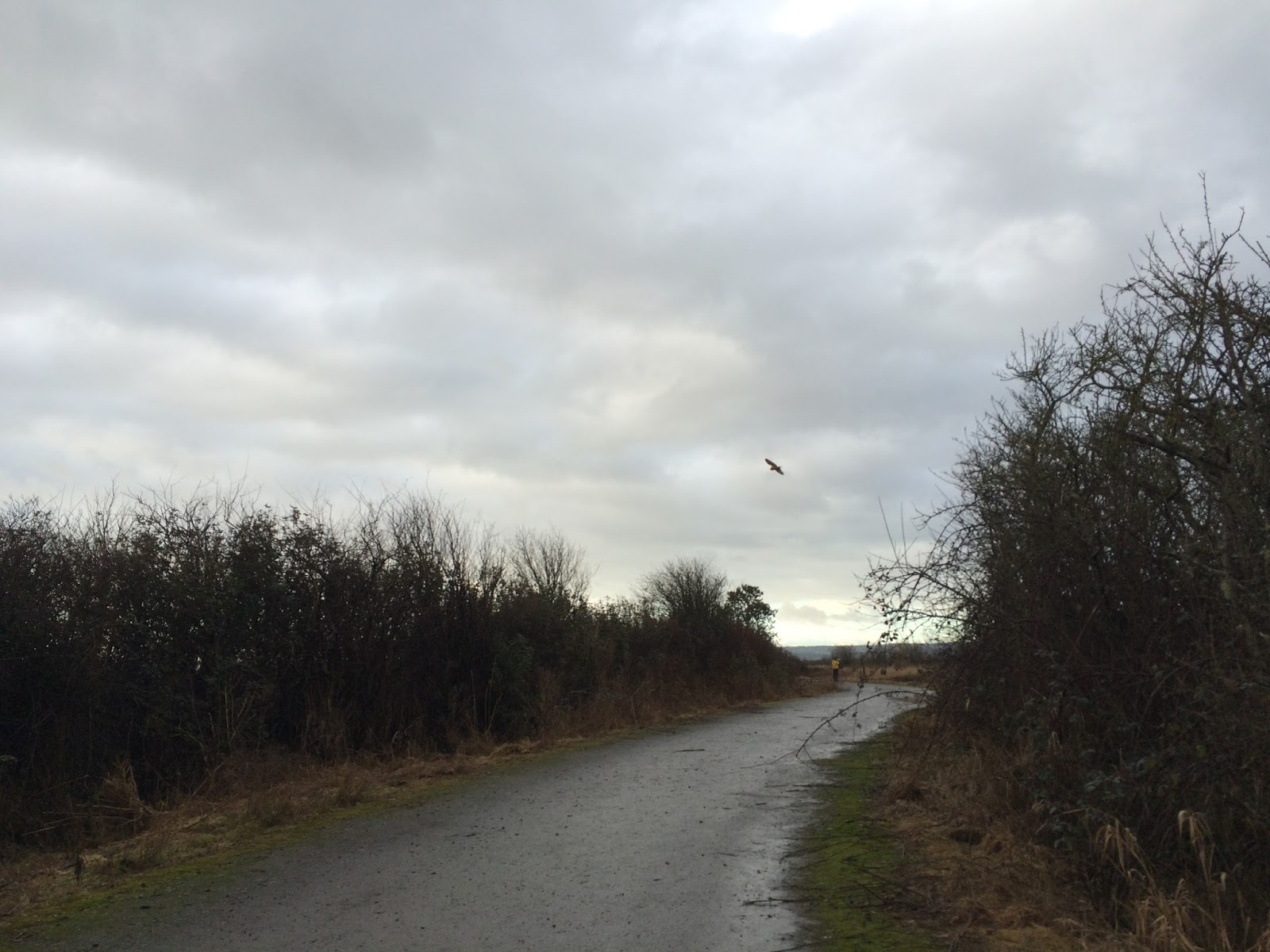 I arrived at Eide Road in Stanwood around 9:15, and found two or three Short-eared Owls, like the one above, flying all over.  The few people around had not seen the Long-eared but the Short-eareds were entertaining and rather tame. 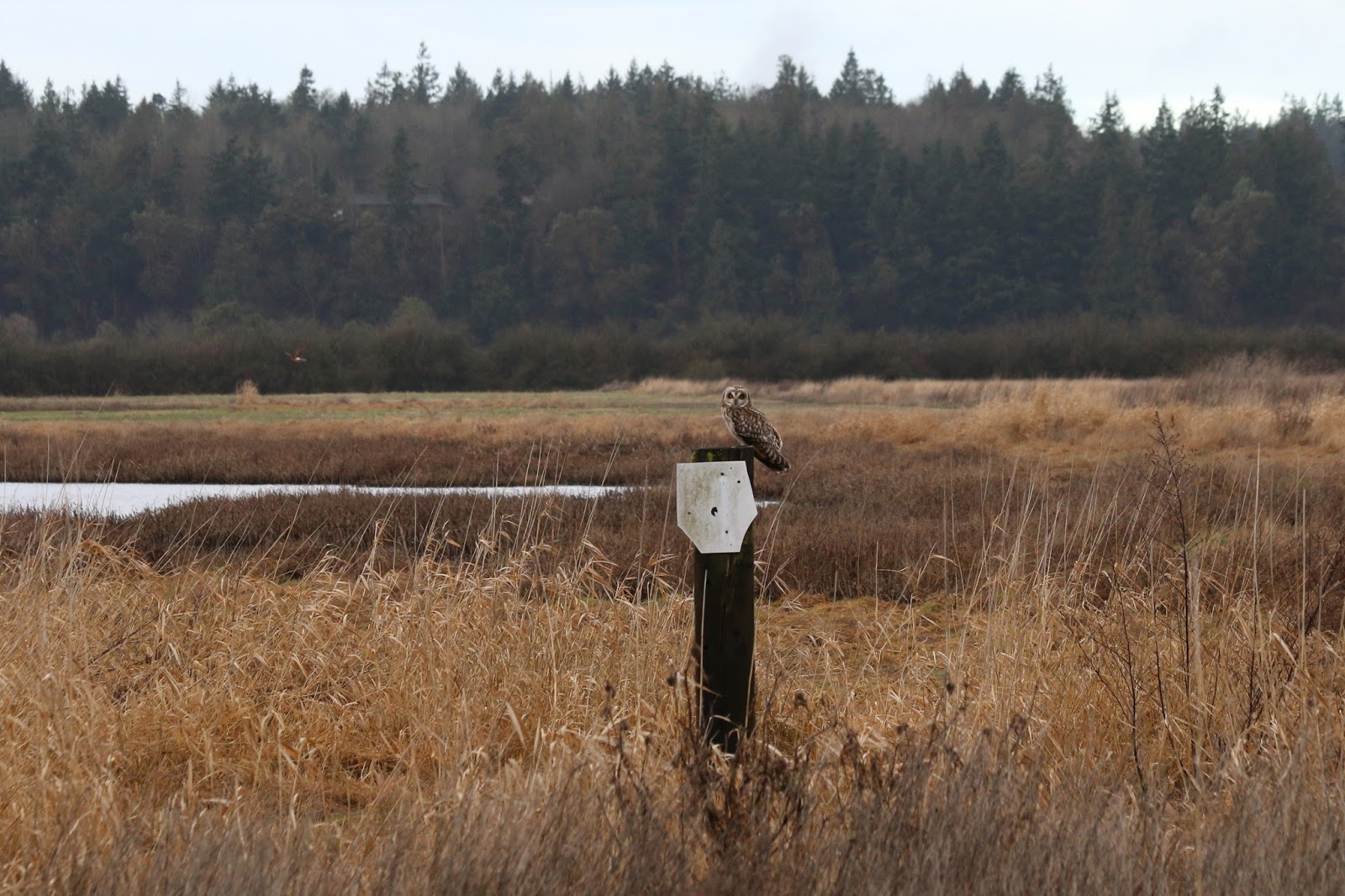 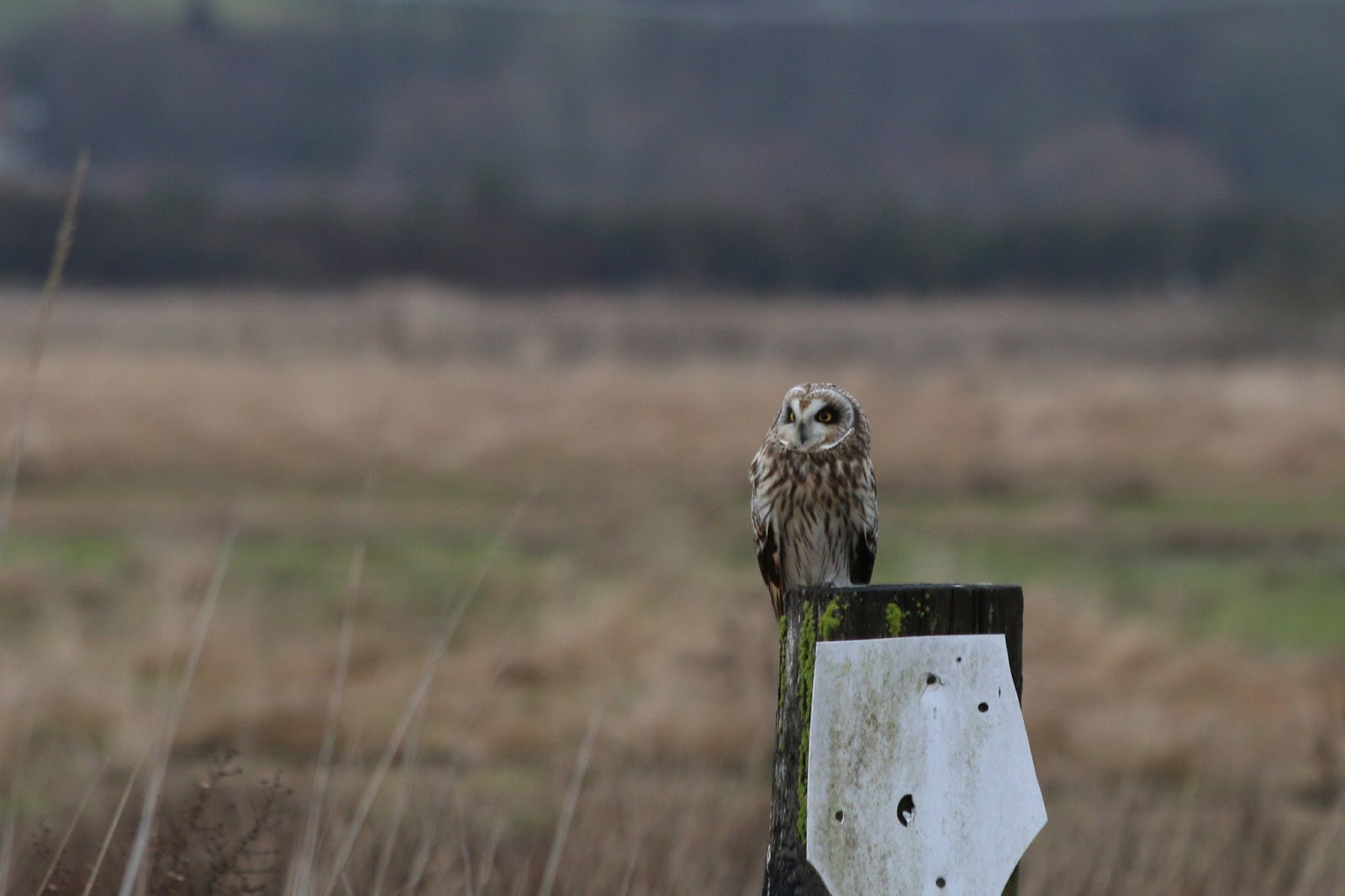 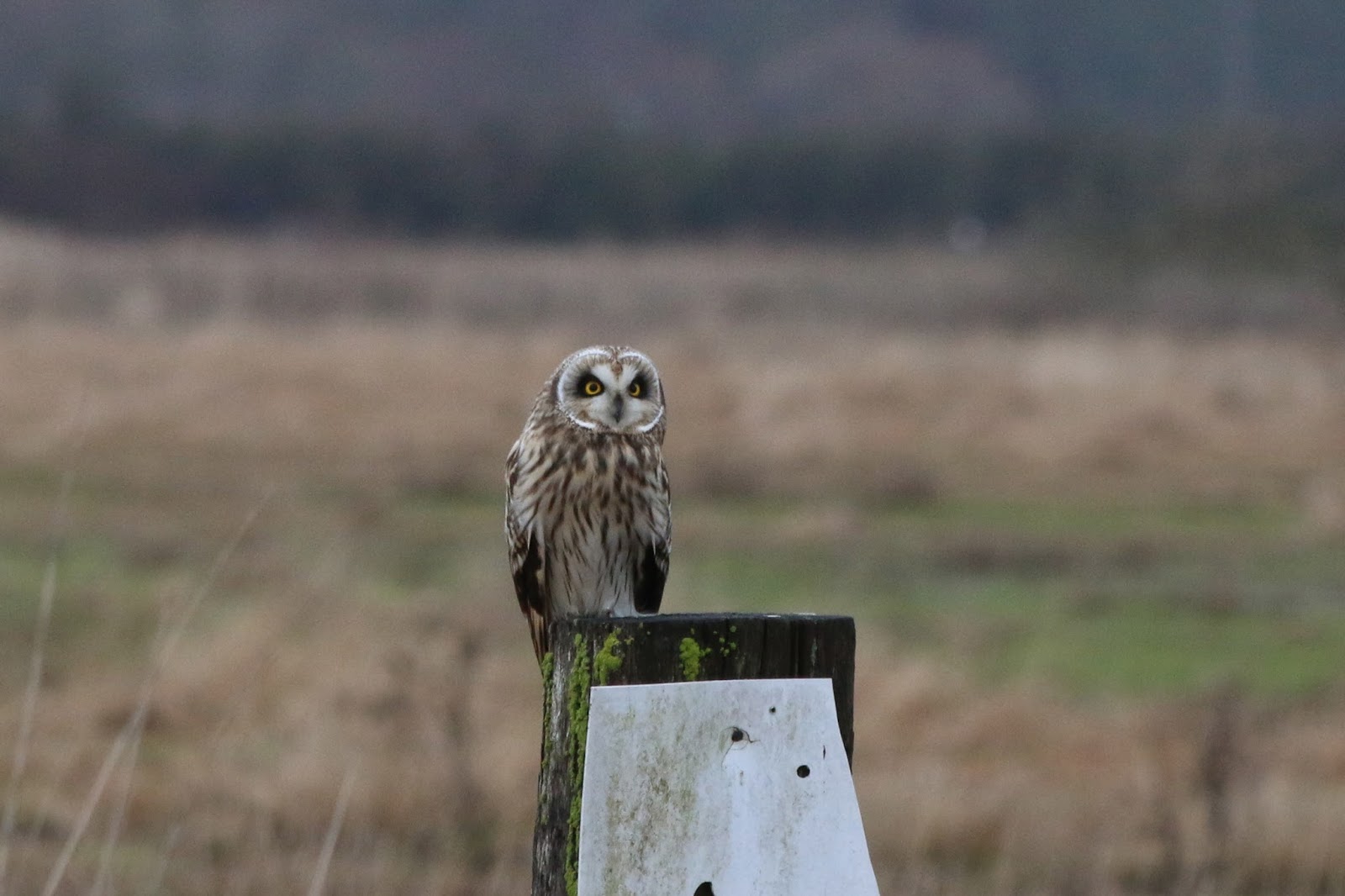 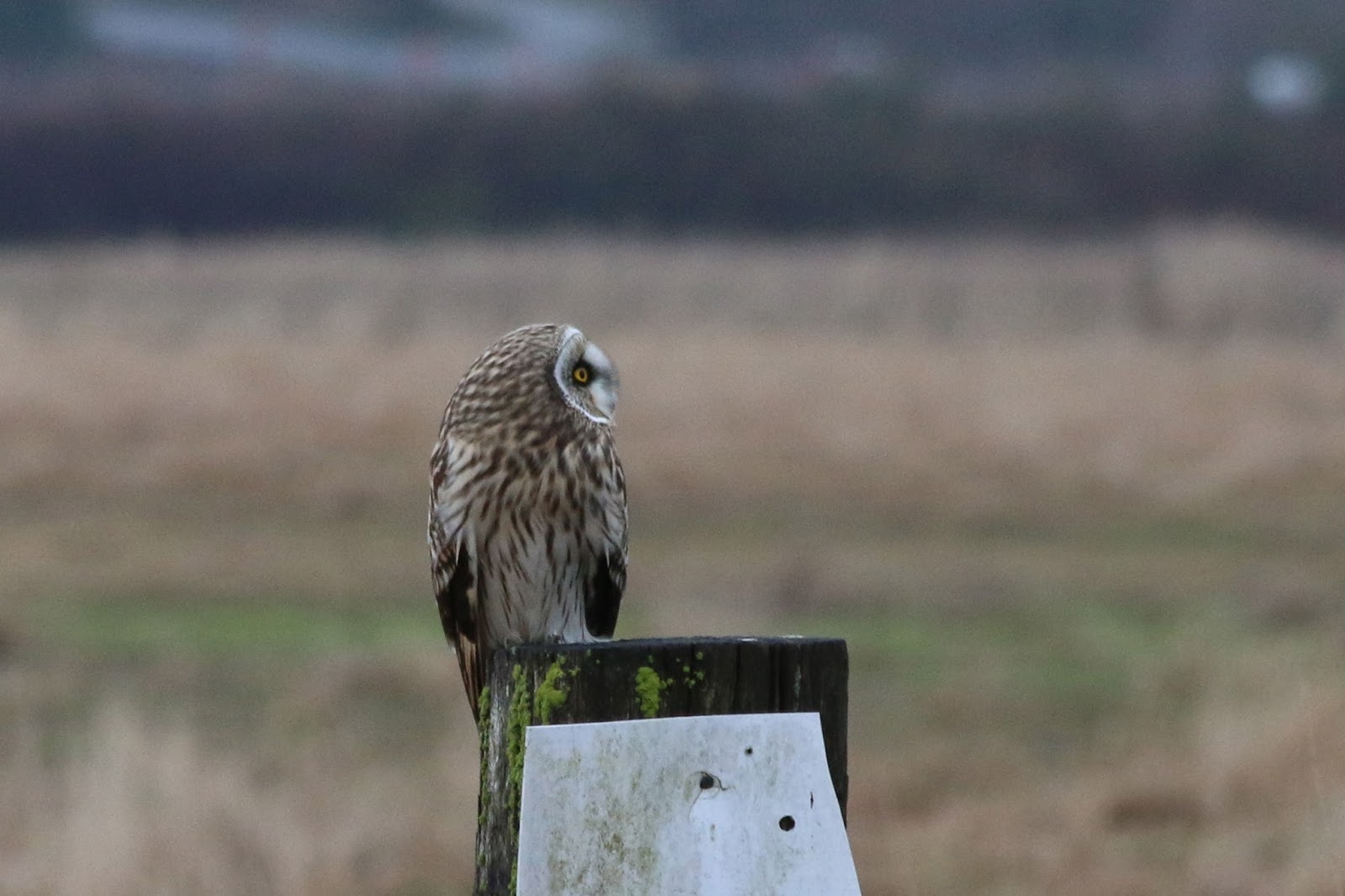 My stomach started growling embarrassingly loudly while watching this owl and I decided to head out to do some exploring elsewhere and eat some lunch.  One fellow at the spot suggested I go up to Fir Island to see the Snow Goose spectacle.  Seemed like as good a plan as any.

I drove around Fir Island for awhile, finding only Trumpeter Swans (#birderproblems?).  The Fir Farms Reserve/Hayton Snow Goose Reserve held zero white birds, but it was still a fine little muddy trail to walk the dogs along. 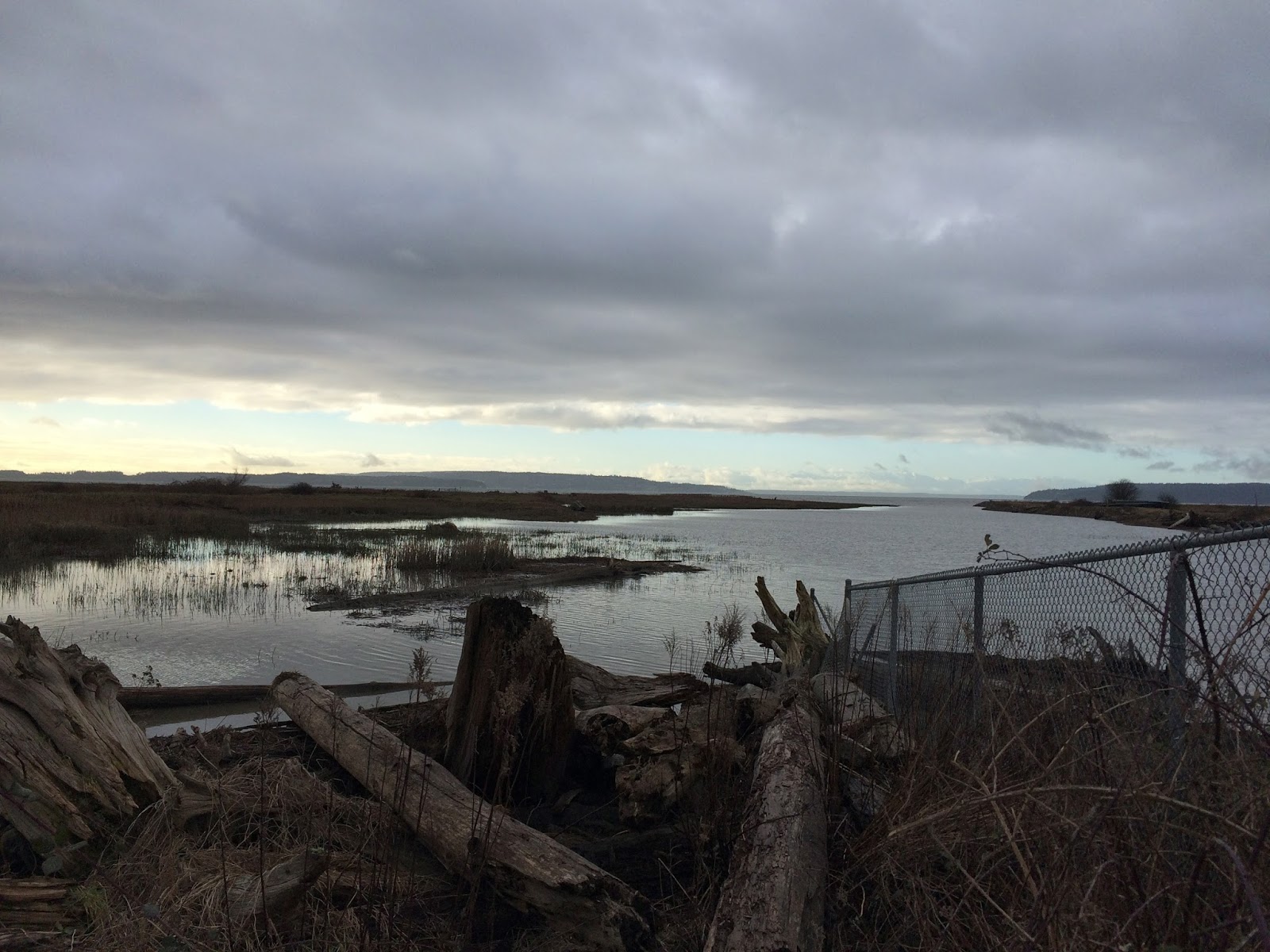 View of Skagit Bay from the trail

Bald Eagles are plentiful here.  Like super plentiful.  I liked it. 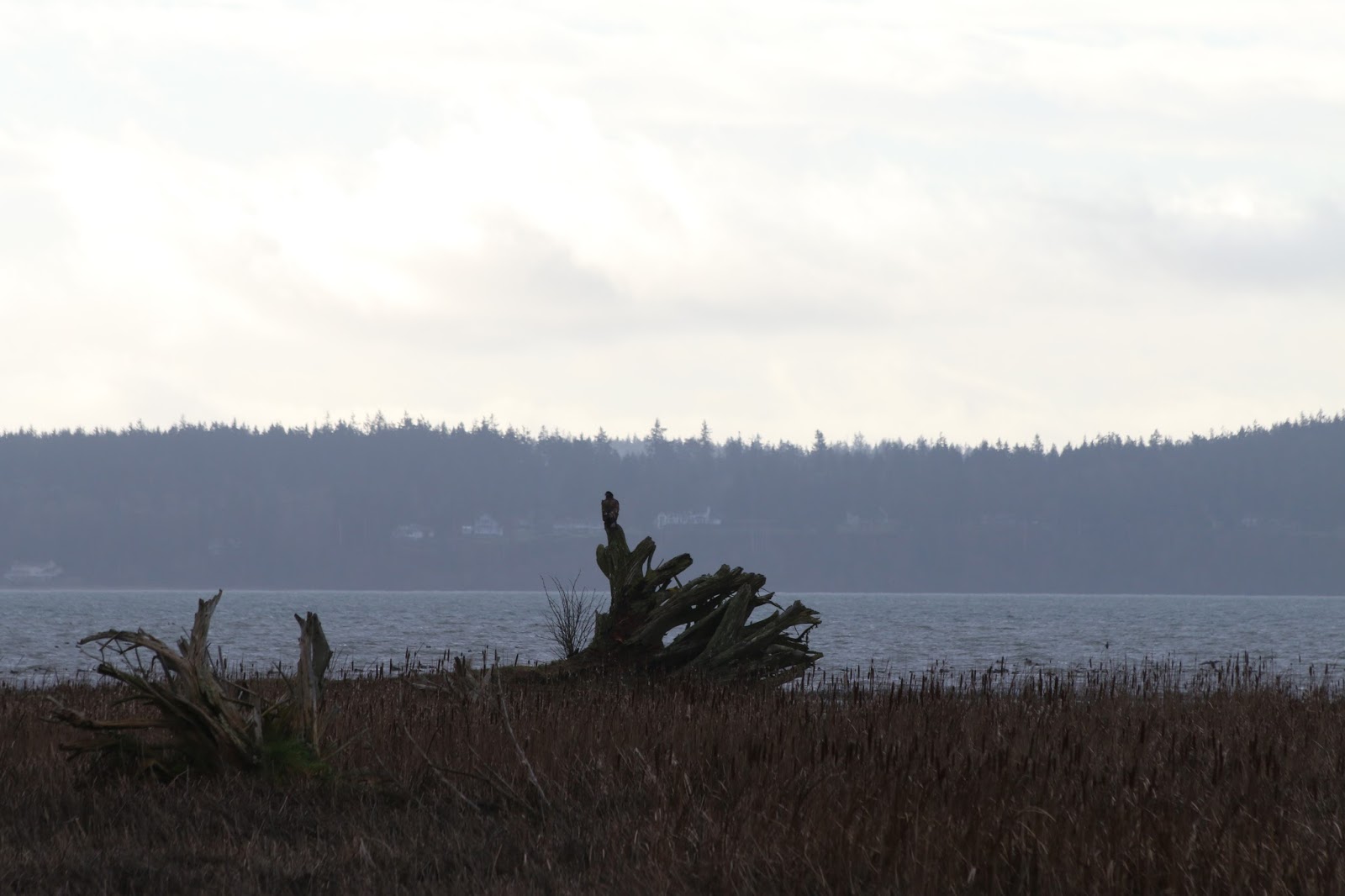 I spent some time cruising around the back roads, checking for the famous geese, but found only small numbers along Maupin Road. 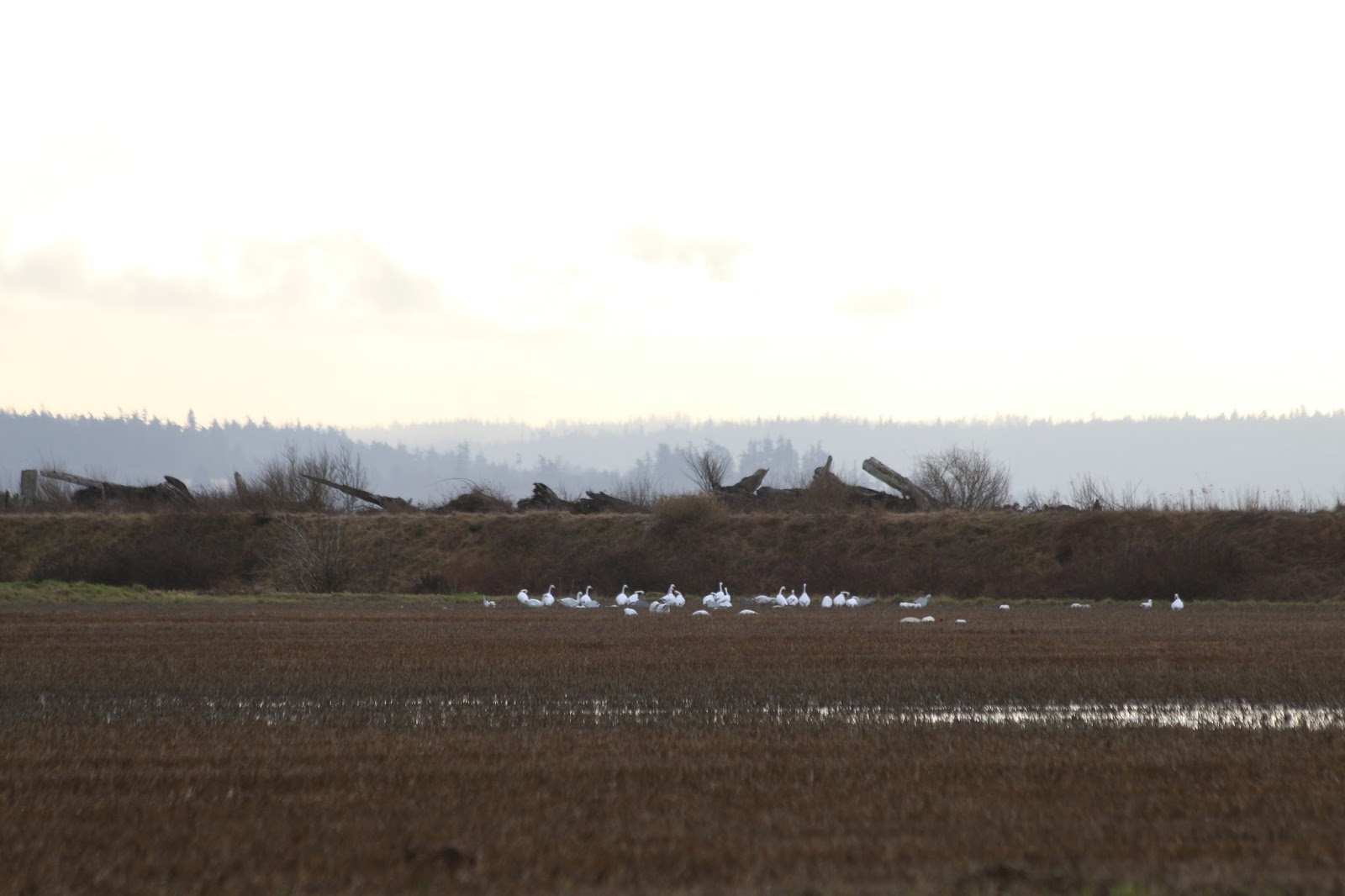 I returned to Fir Island Road, cursing the lack of pullouts when a pair of Bald Eagles locked talons and tumbled through the air.  I did manage to find a pullout near some Trumpeter Swans... 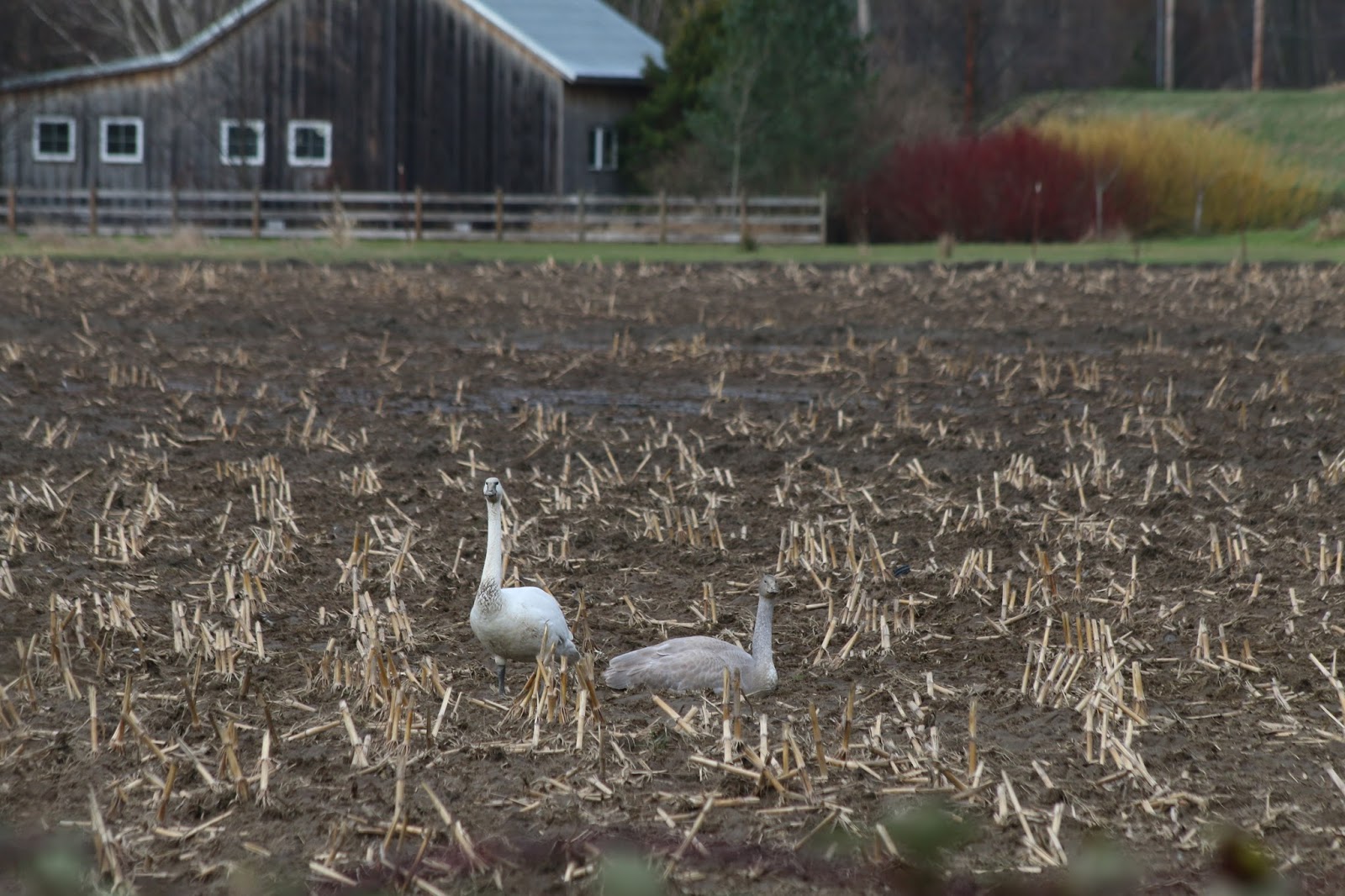 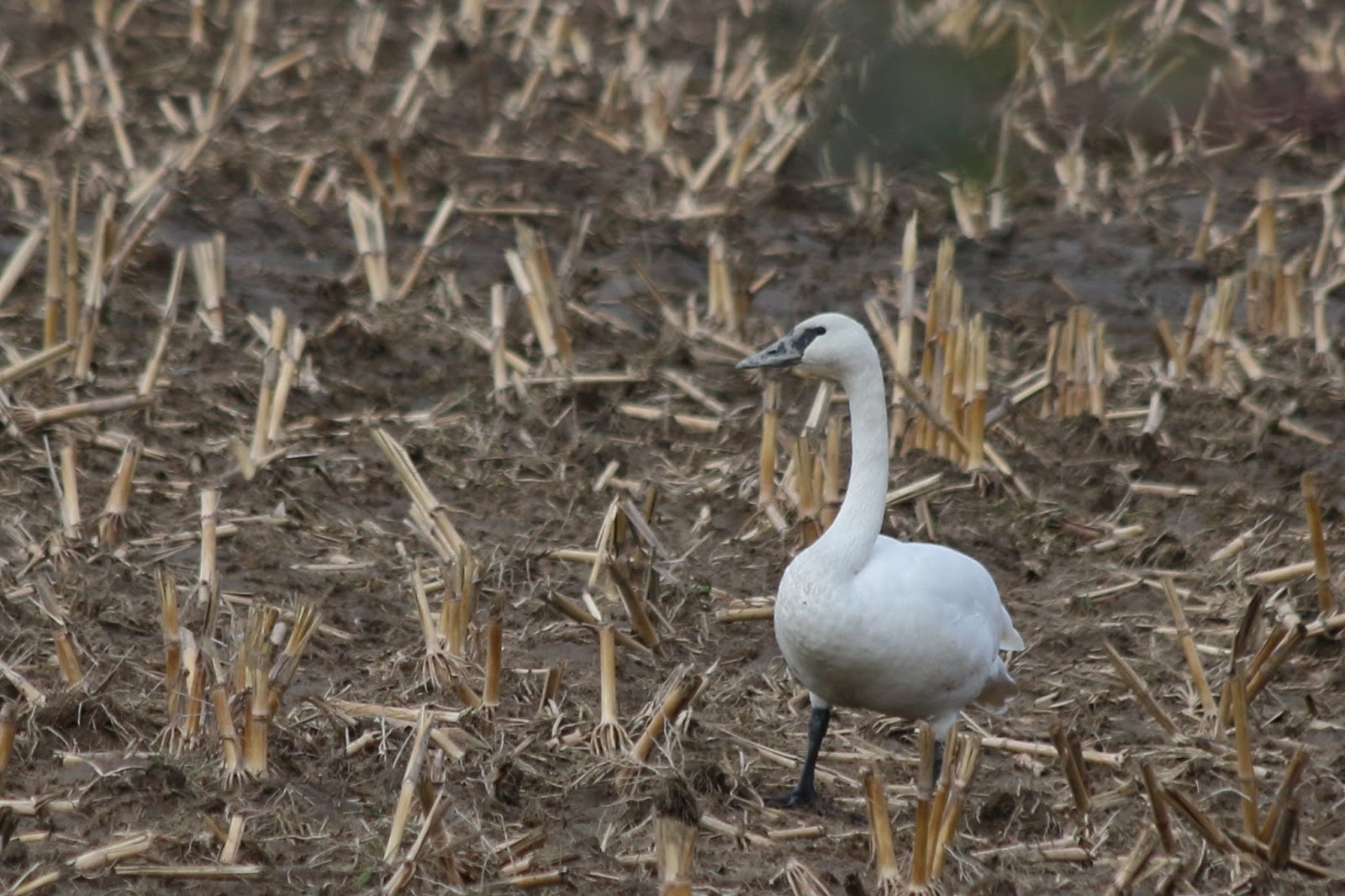 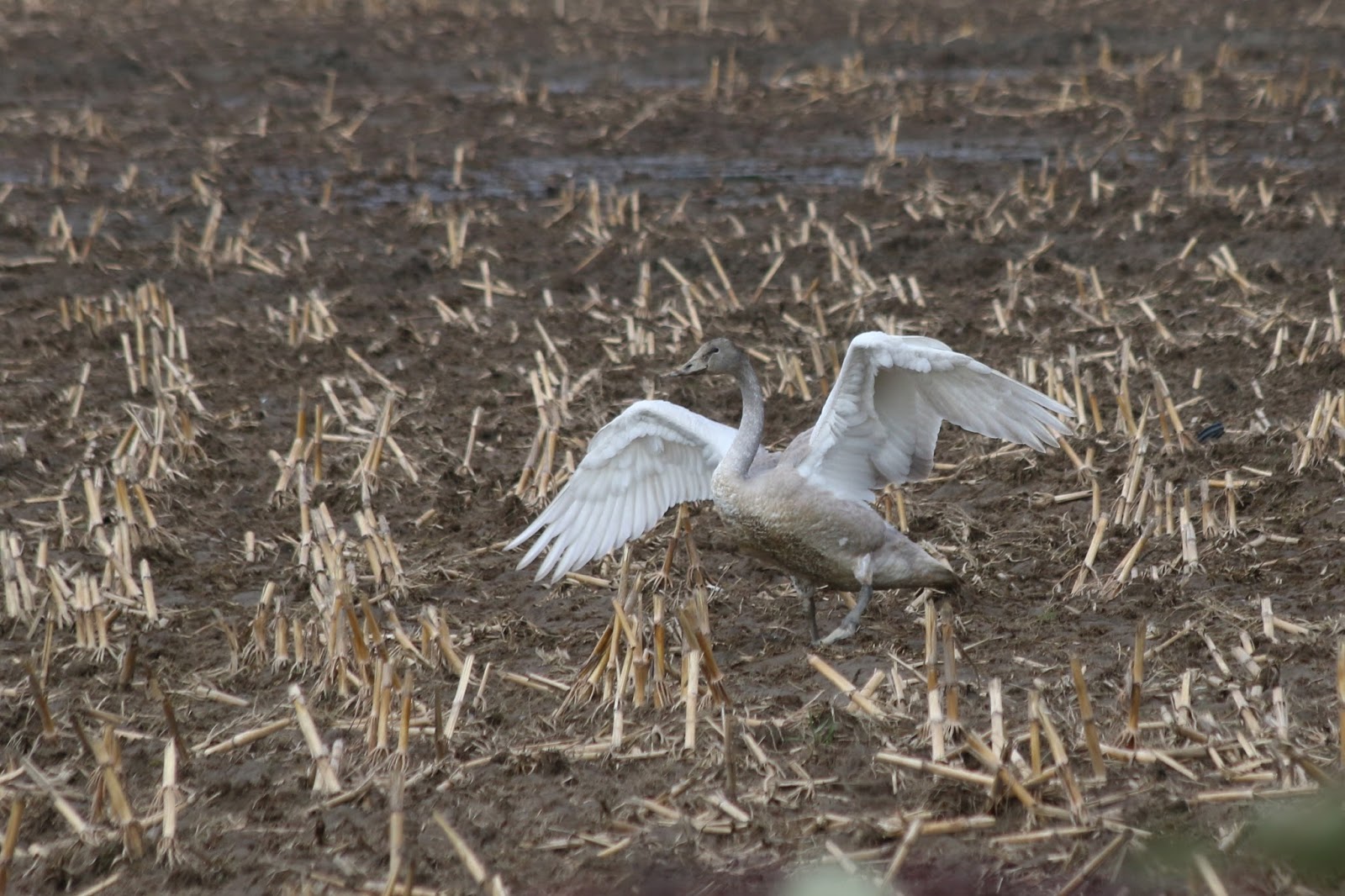 I don't remember ever being so close to any on the ground.  Pretty cool.  They shared their small field with a large flock of blackbirds which occasionally took flight to make this churchy building look cooler. 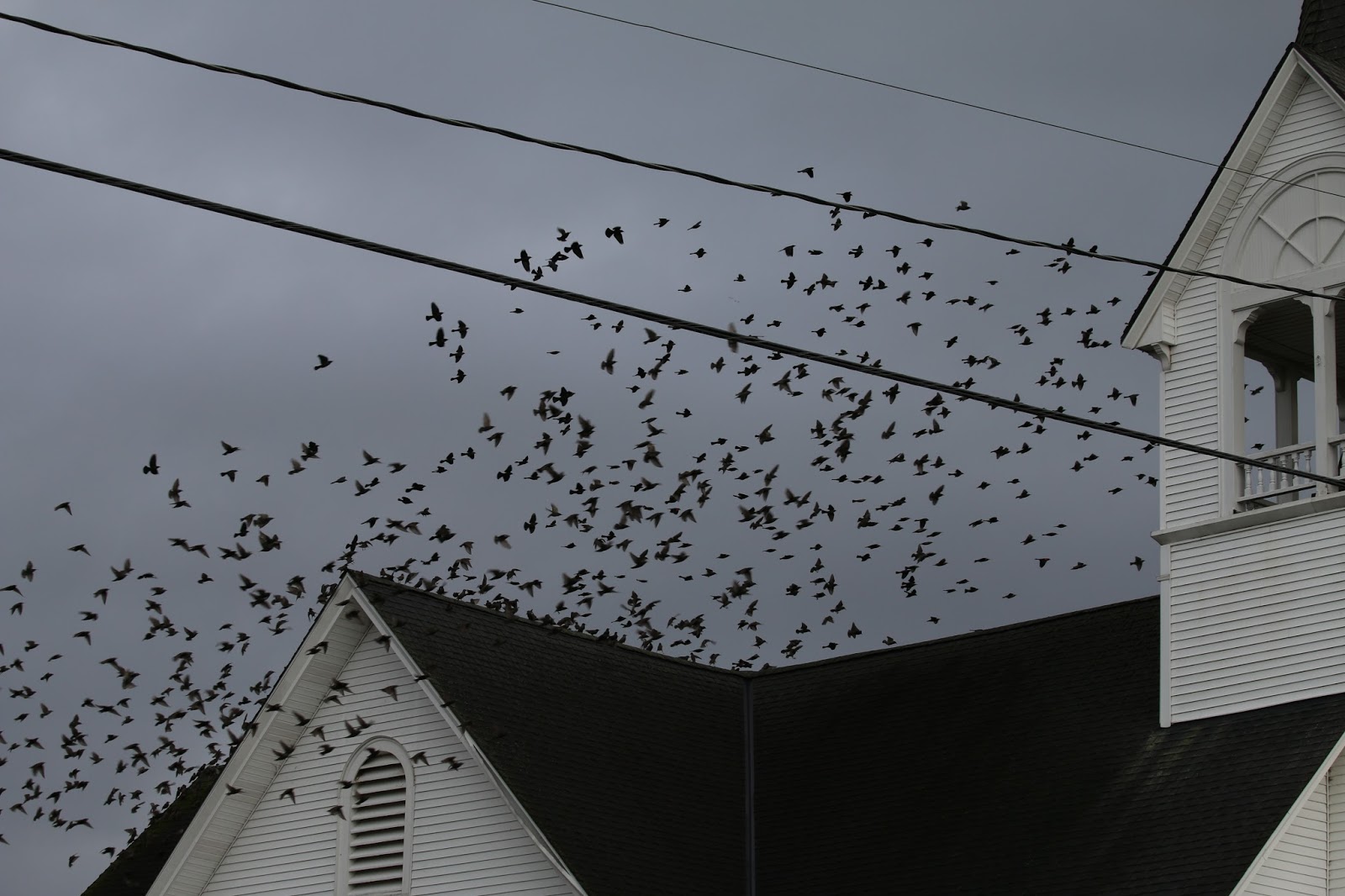 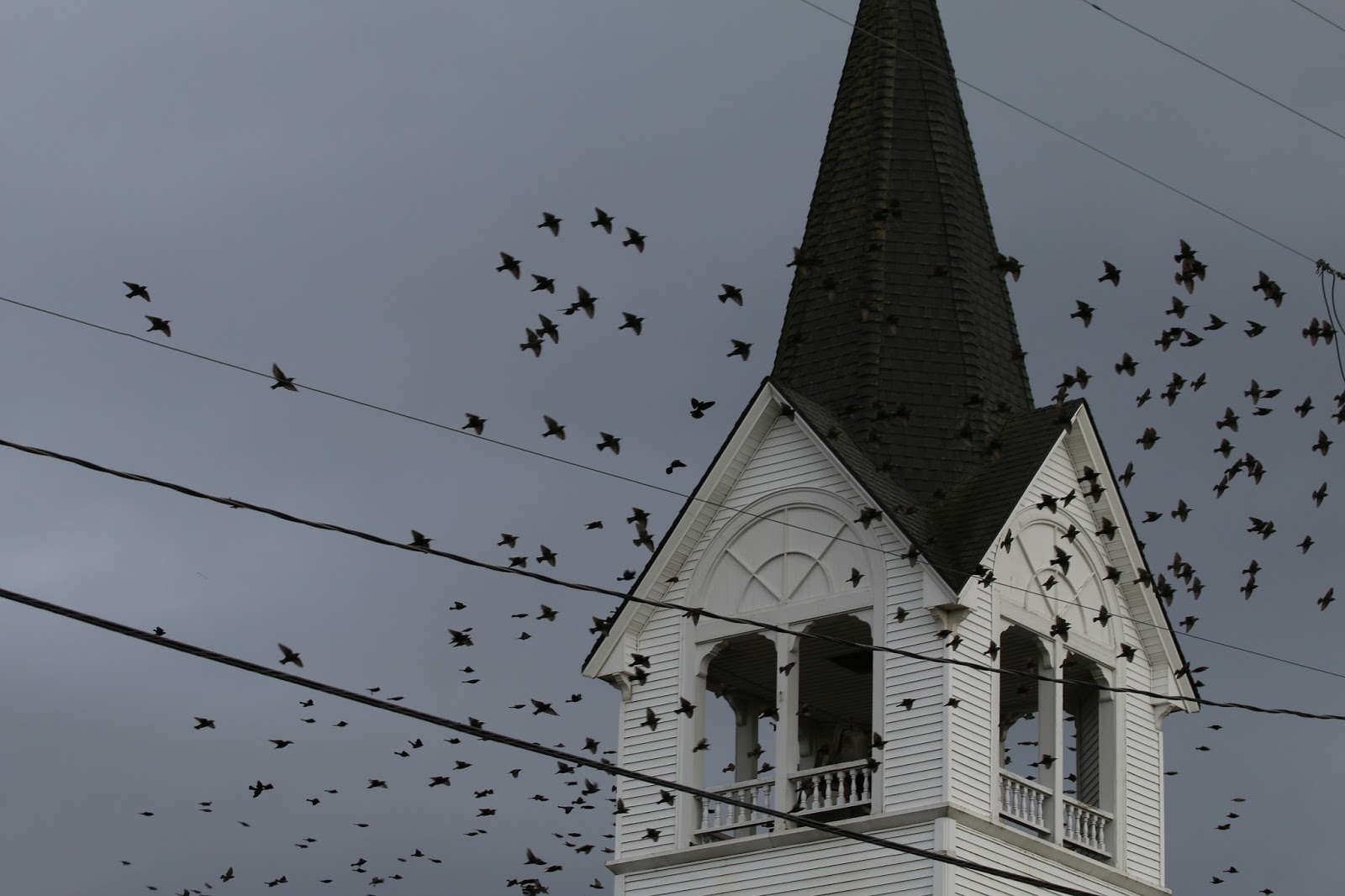 After Fir Island I drove back down to Eide Road to make a last attempt. 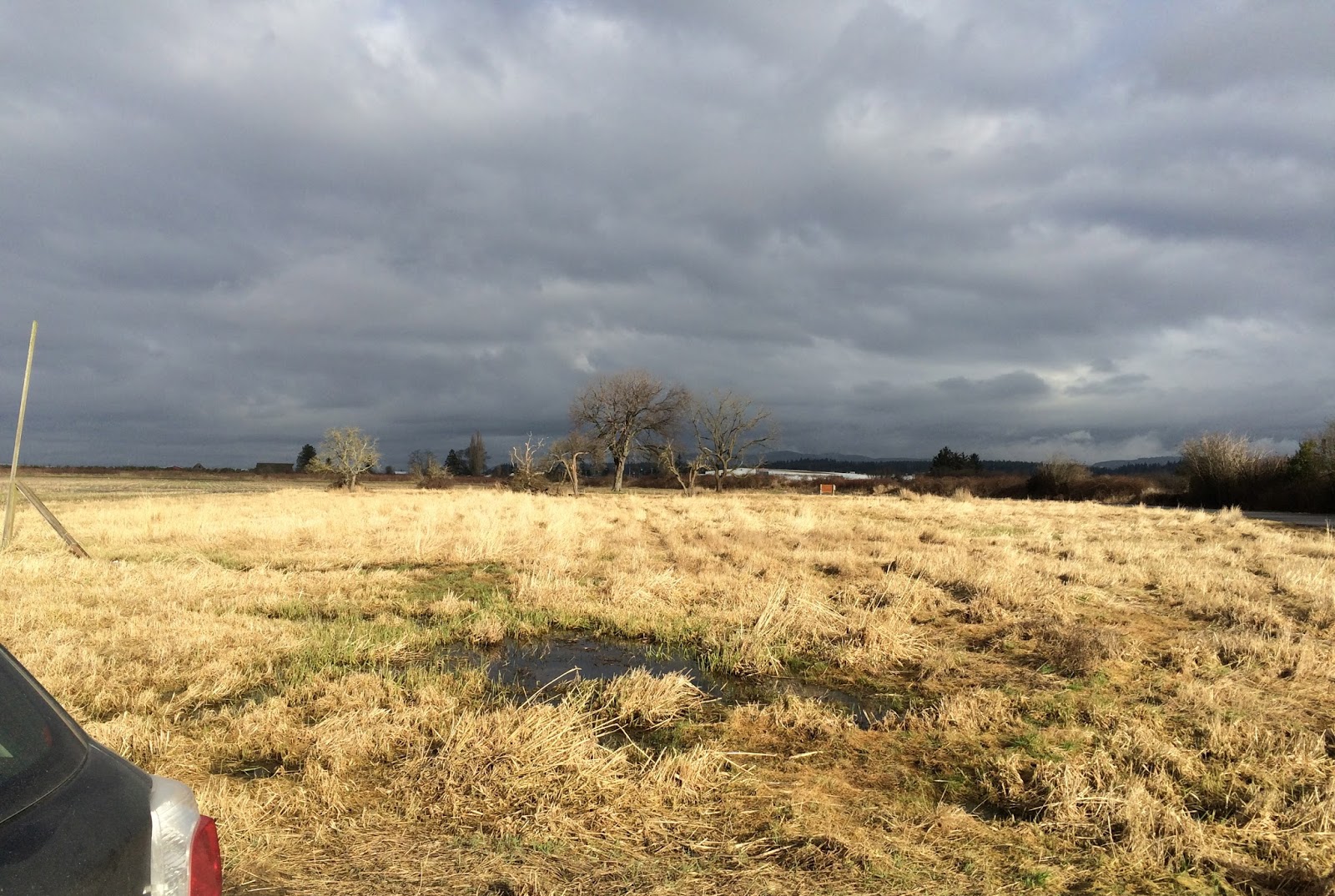 About a dozen photographers were standing around, watching a Short-eared Owl.  It was one of the rare times I have encountered a mass of photographers, rather than birders.  They seemed generally unfriendly, perhaps due to my lack of tripod, but one fellow told me where I could find the Long-eared.  I had walked right by it. 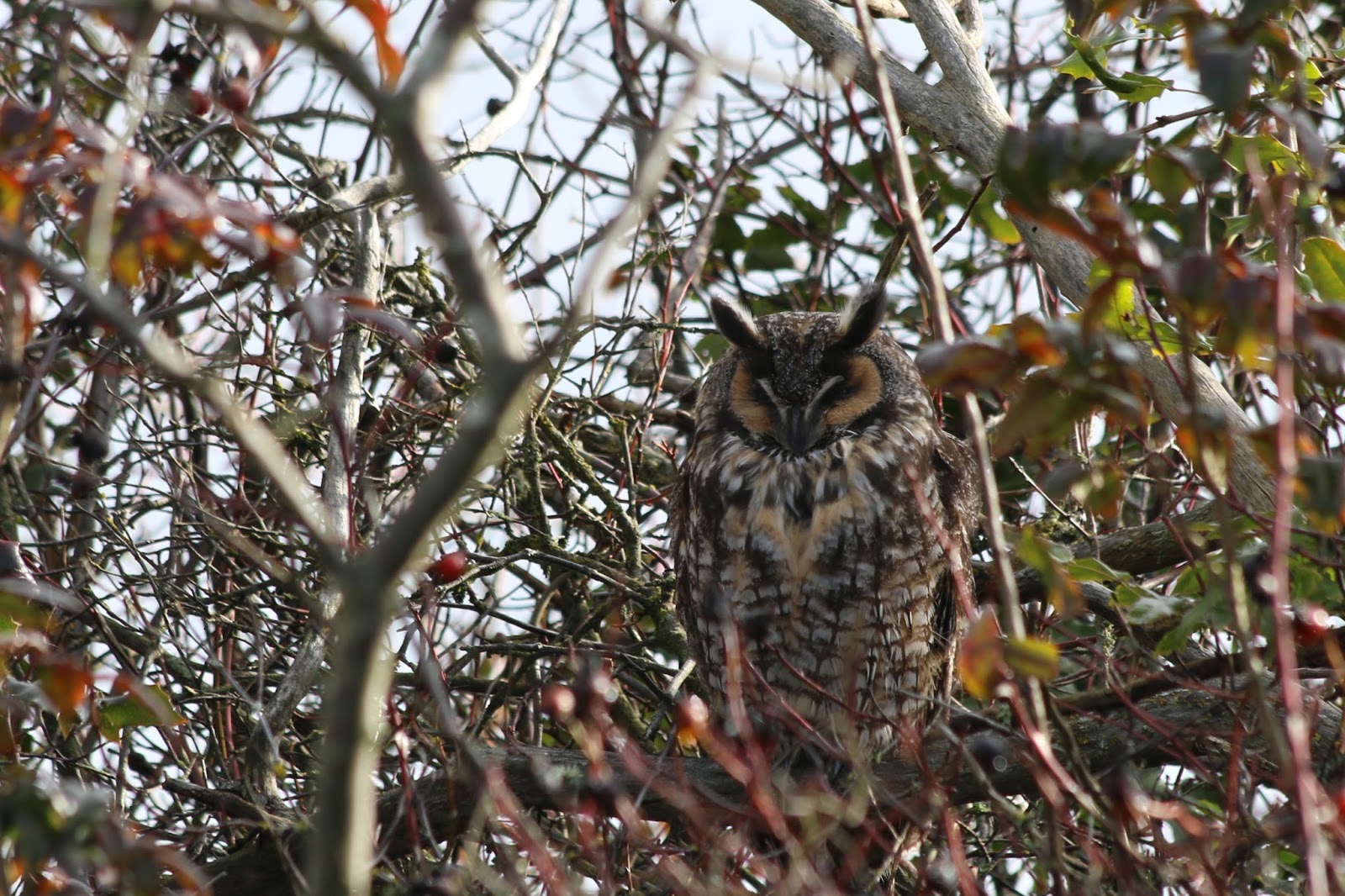 First life bird of 2015!  He sat there while I ran through a ton of different settings, trying to figure out how to make him look best.  Though he seemed pretty unconcerned with me and the other two dudes that joined me, he was not completely inactive.  He chewed on his leg, he looked behind him, and eventually he hopped over a bit into thicker brush.  That's when I left.  Here are a few more shots I managed in my meager attempts to give Rhett a run for his money.  Spoiler:  Rhett has much better LEOW photos. 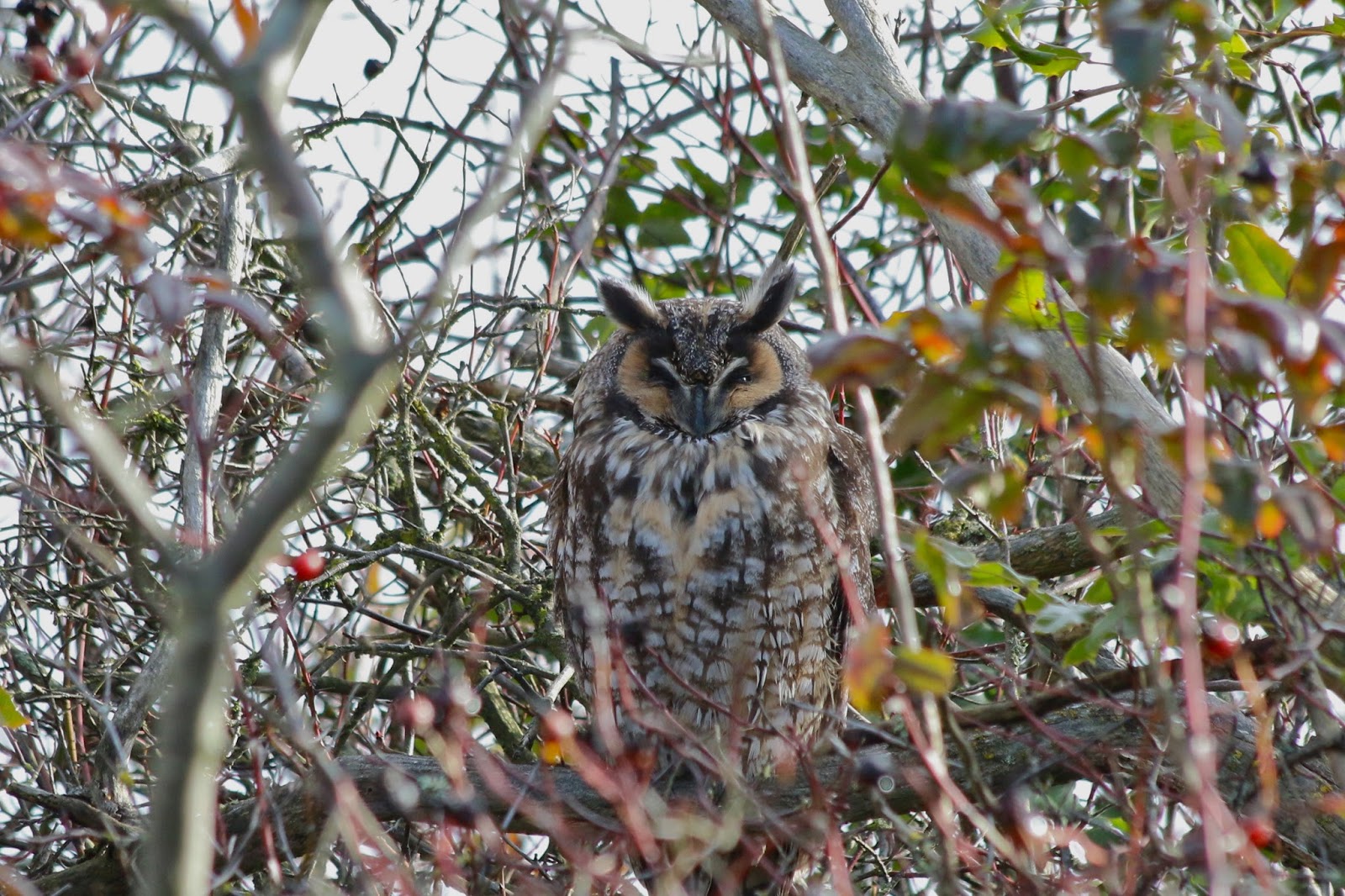 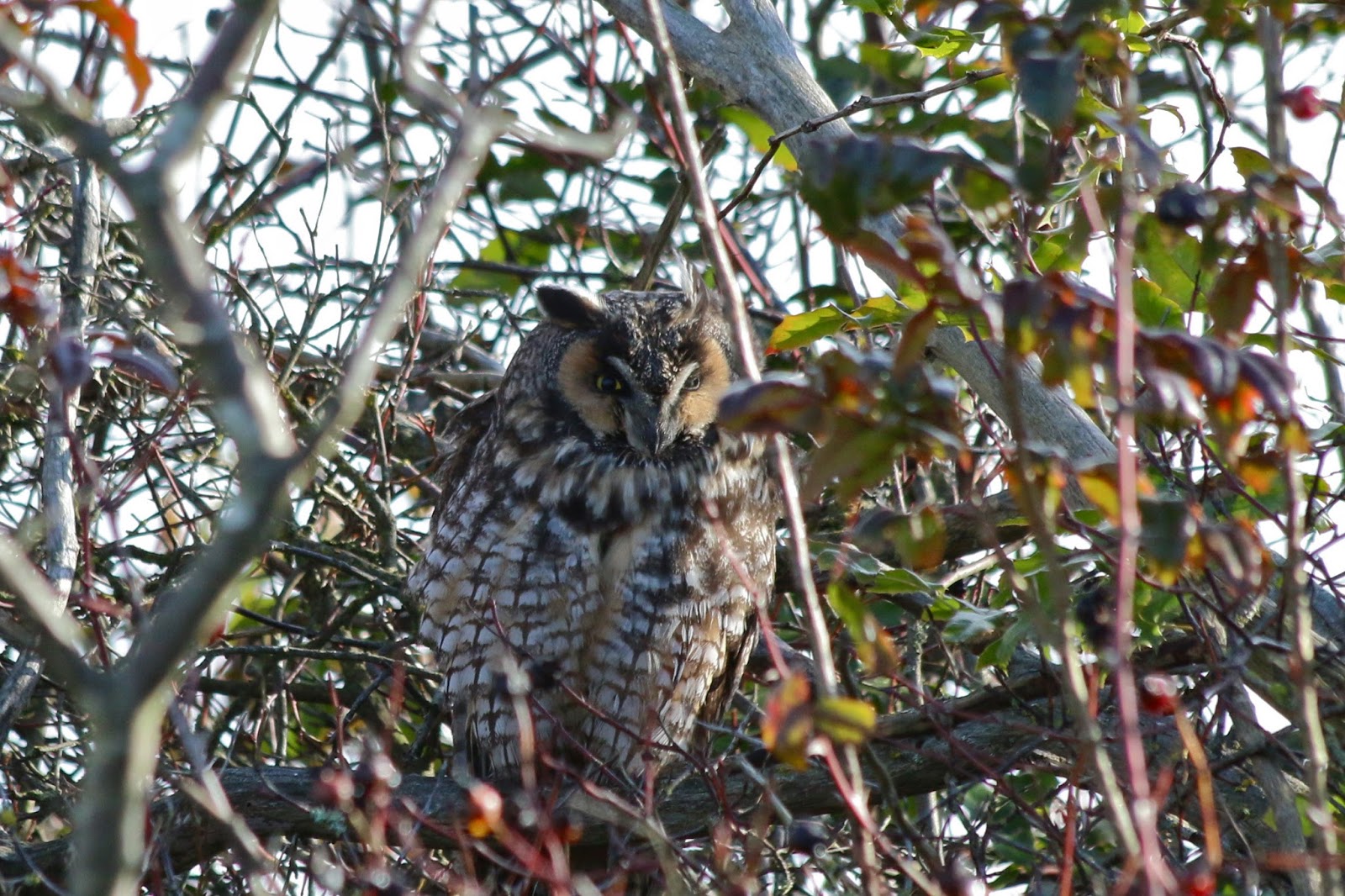 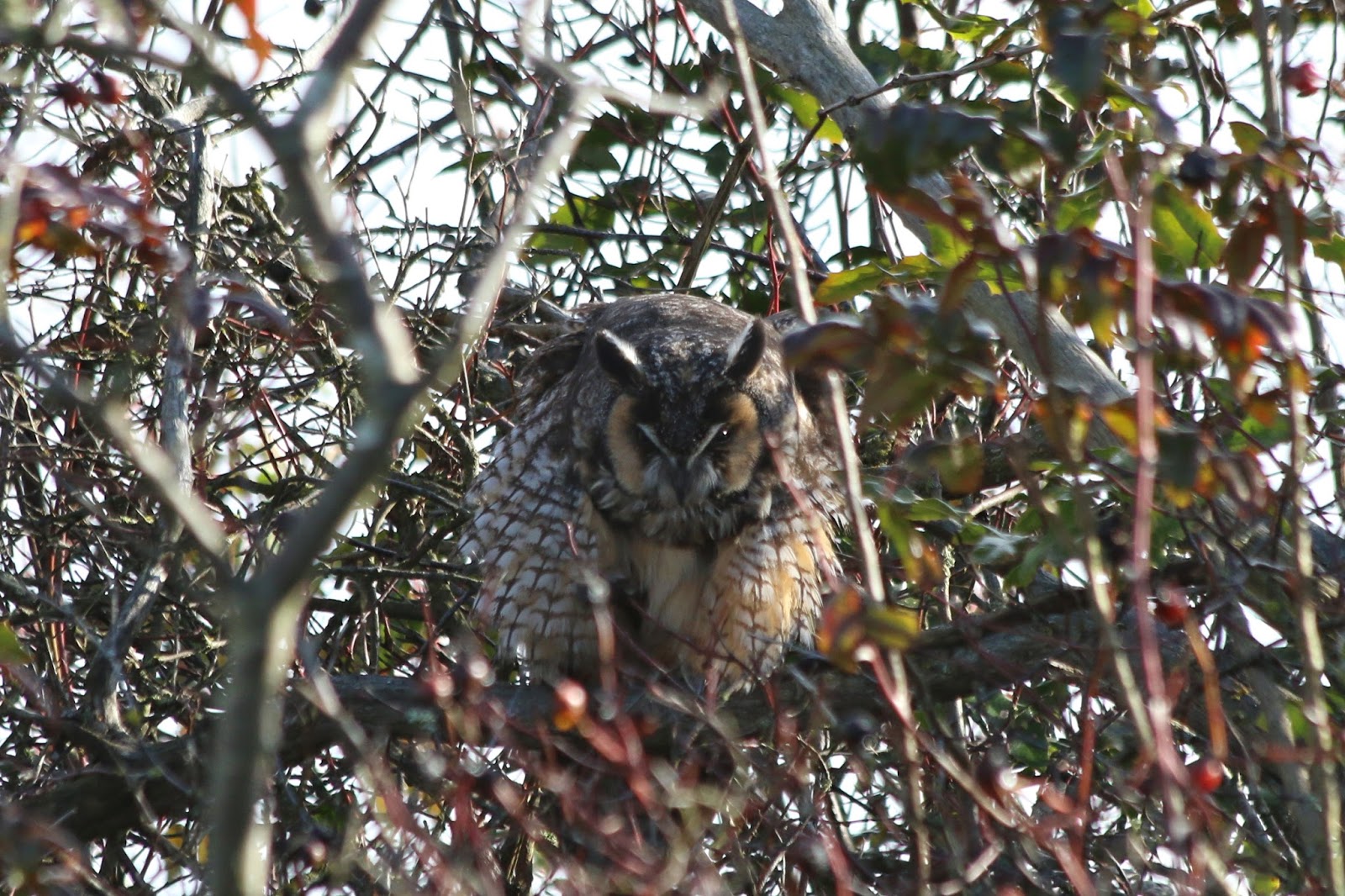 So stoked to finally see this owl.  I can't remember ever hearing of a reliable one, and I'm glad I made the trip.  My plan was to stop to look for the Tacoma Slaty-backed Gull on the way home, but after checking out the area briefly, I decided I did not have the energy for the hunt.  Next time.  Though I never want to drive through the Seattle/Tacoma/Olympia area ever again after yesterday's traffic.