The making of a nemesis.

Webster's Dictionary define's nemesis bird as:  "A bird that is highly sought after by an individual birder but despite repeated efforts to be seen, remains elusive and is not able to be added to the birder's life list.  Nemesis birds are often regularly seen by other local birders and the birder missing each sighting can eventually come to see finding the bird as a quest or challenge to one's birding honor."

Kidding.  That's from some birding website.  Anyway.  I have had a few nemeses over the years including Tufted Duck, Northern Shrike, and White-tailed Kite.  These were birds I worked for, that I feel like I earned.  Now of course I see them without any trouble.

On my recent "weekend" I was planning another trip to Gilliam County for more exploration.  This is not a bad day trip, but I packed stuff in case I wanted to stay overnight, in case I kept driving east, in case I ended up in Joseph looking for a Gyrfalcon instead. 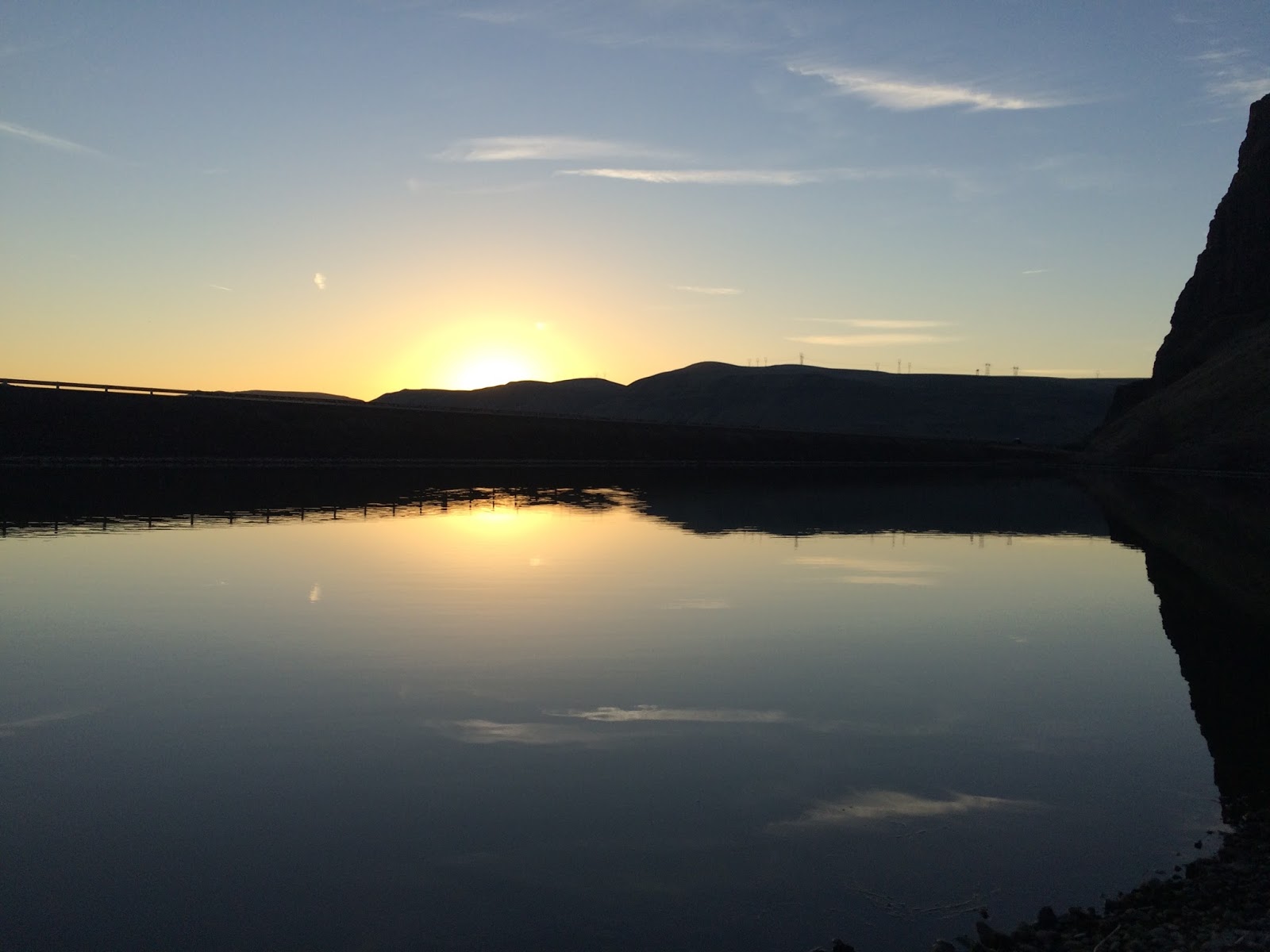 I know myself well, because that's exactly what I did.  I made a quick stop in Wasco County for my year Canyon Wrens and to see if Peregrines were nesting in the same canyon wall as last year.  Success all around.   A quick scan of the Columbia in Gilliam County produced a Red-necked Grebe, and then onward to Union County for a dog walk around Spring Creek Road. 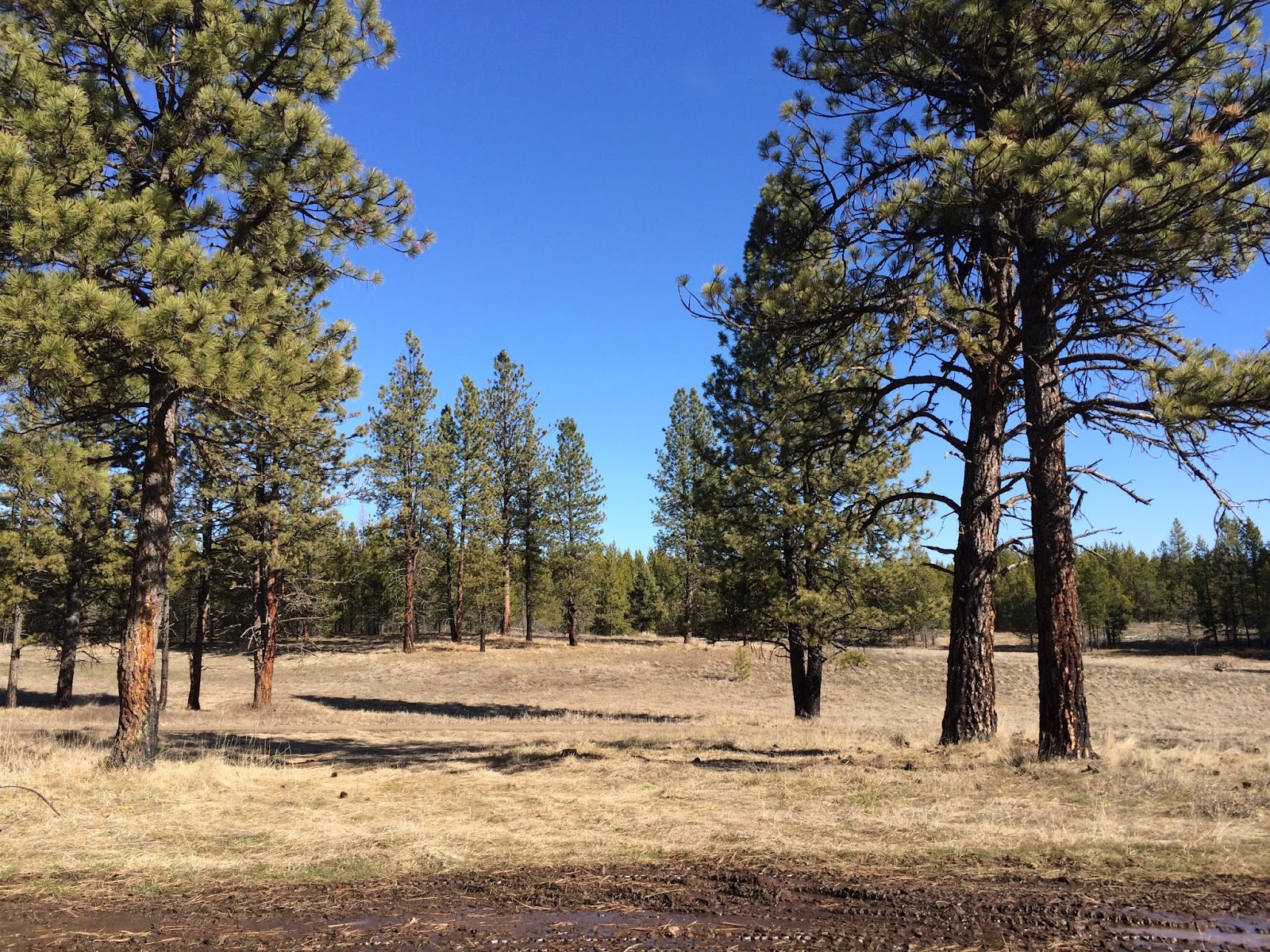 Someday I will spend some real time here looking for the local Great Gray Owls, but on this day I caught some Red Crossbills, Clark's Nutcrackers, and Western Bluebirds. 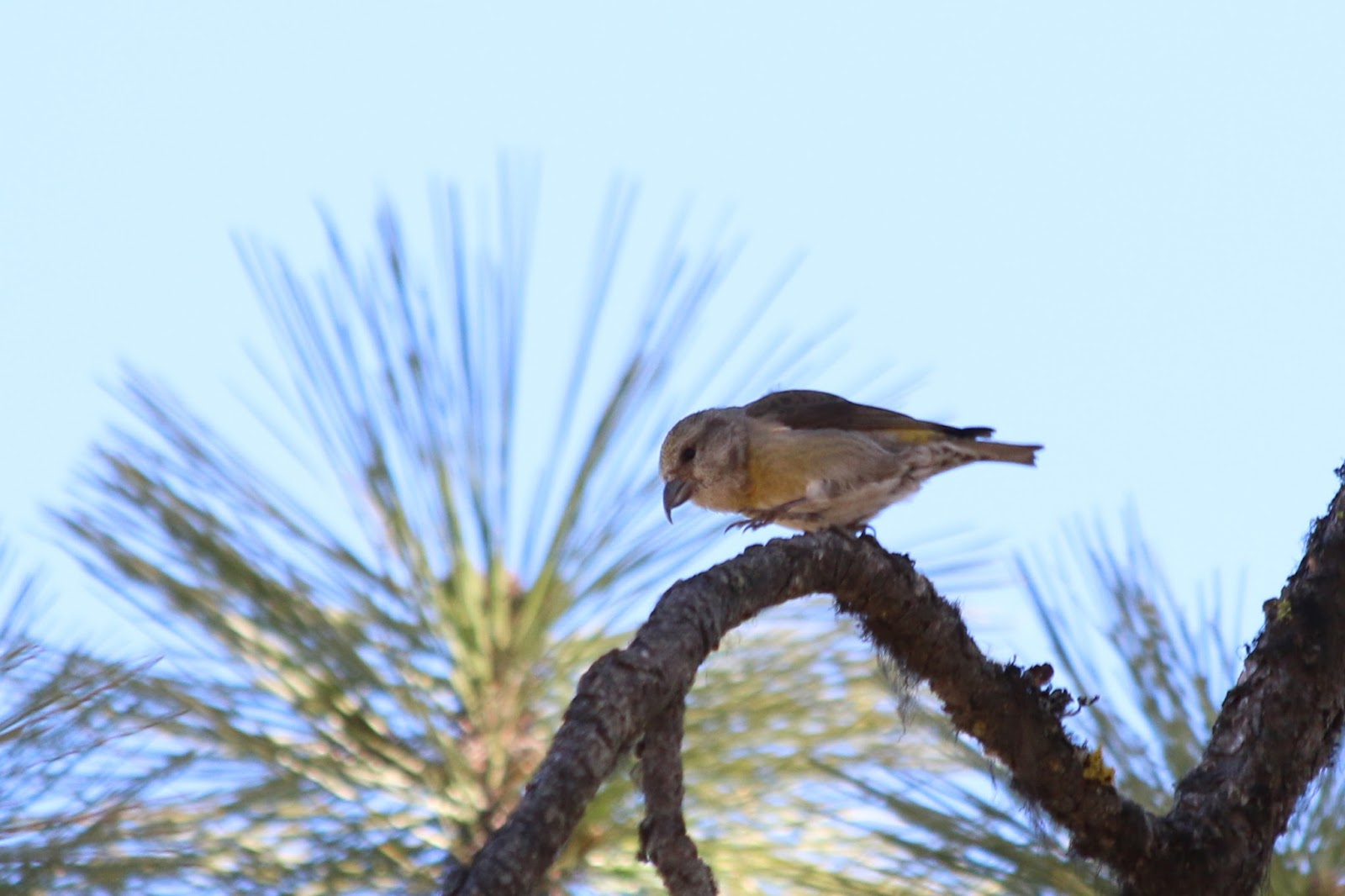 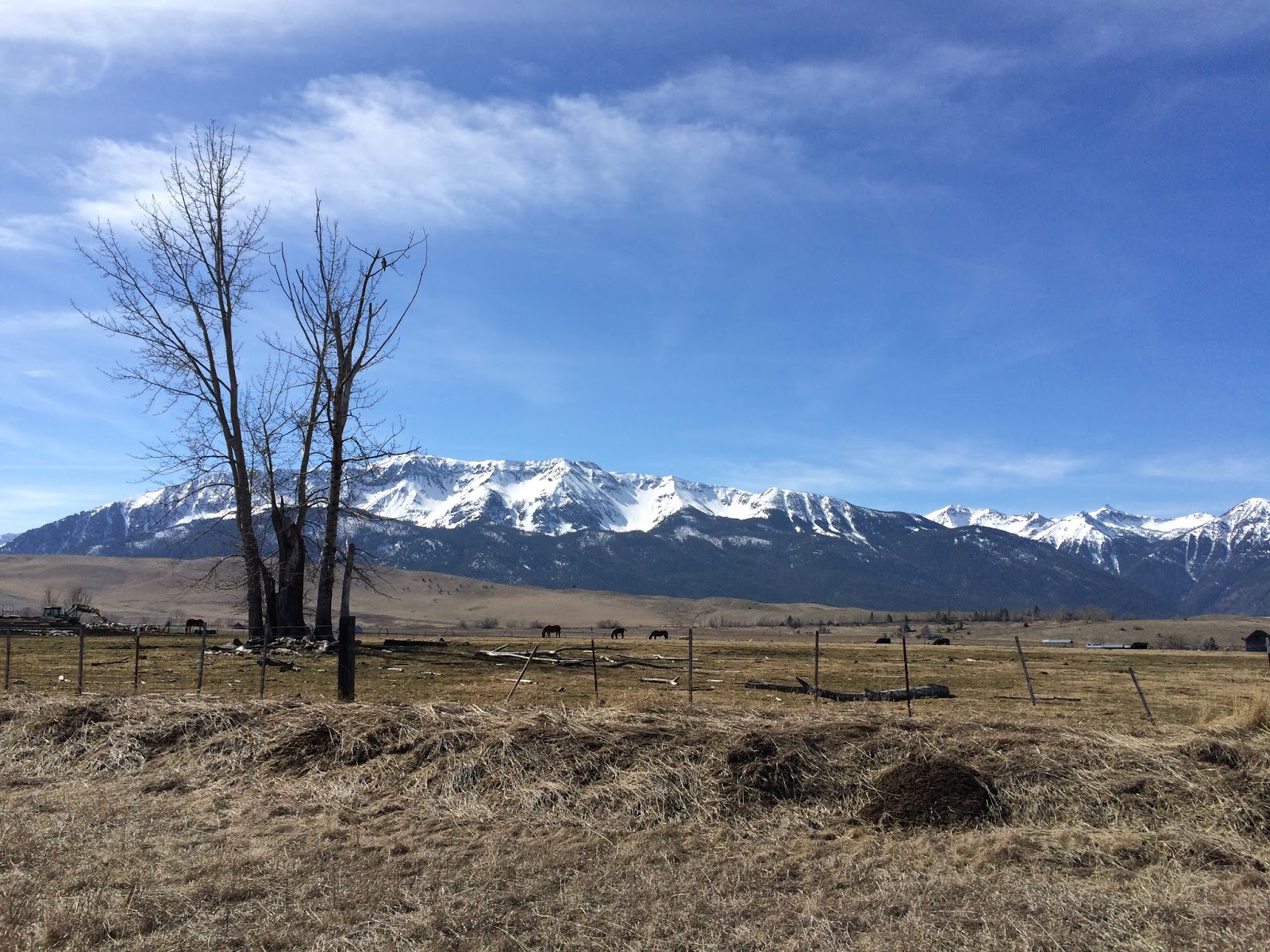 Not one Gyrfalcon.  I was dipping.  After an hour and a half or so I needed a break and drove back up to Enterprise to check out Leap Lane, a popular road for birding.  Very quickly I stumbled upon a small flock of Gray-crowned Rosy-Finches! 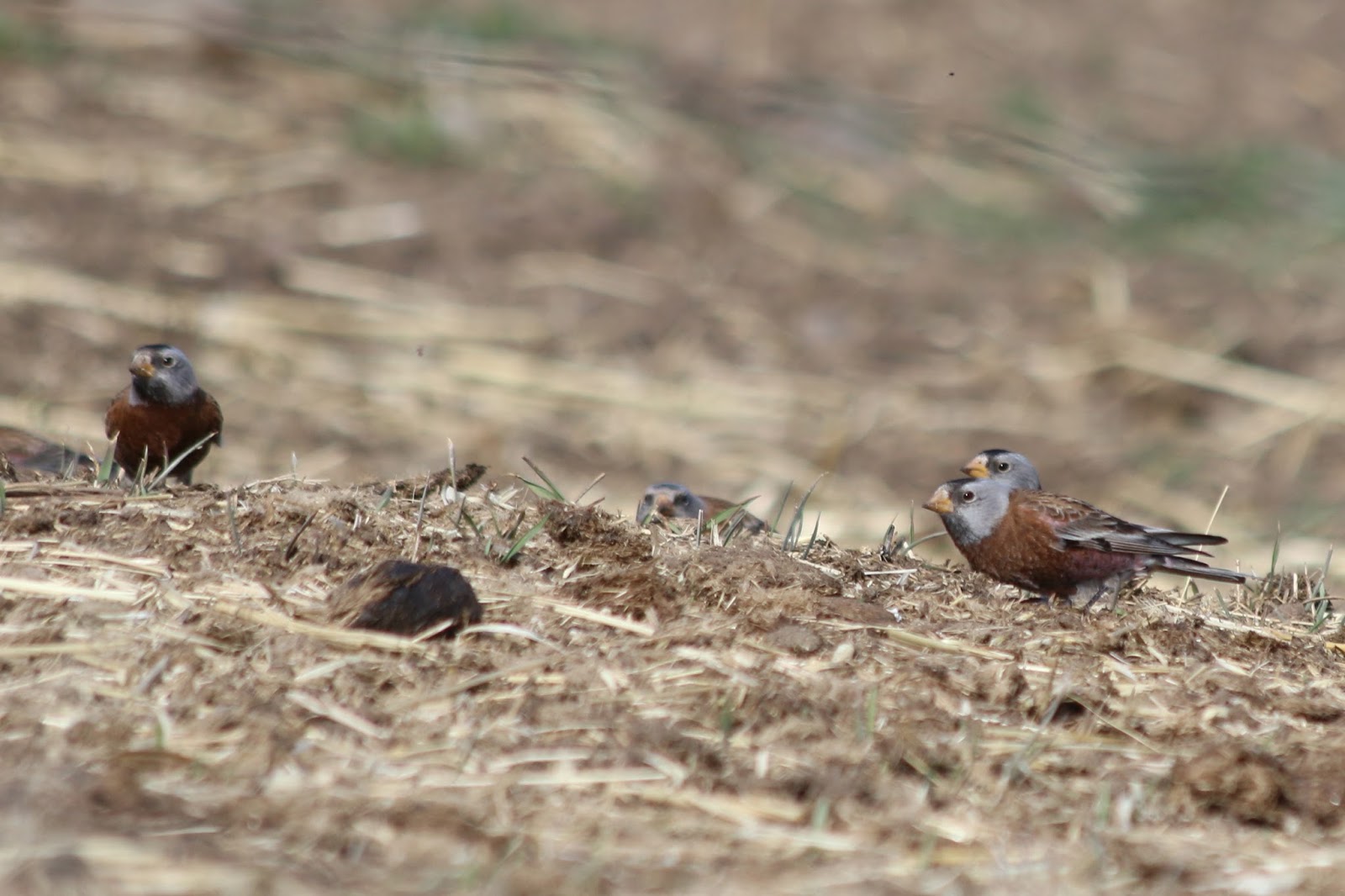 Life bird.  They can be found an hour from my house on Mount Hood, but not reliably, and so I was happy to be watching these guys poking around the horse manure. 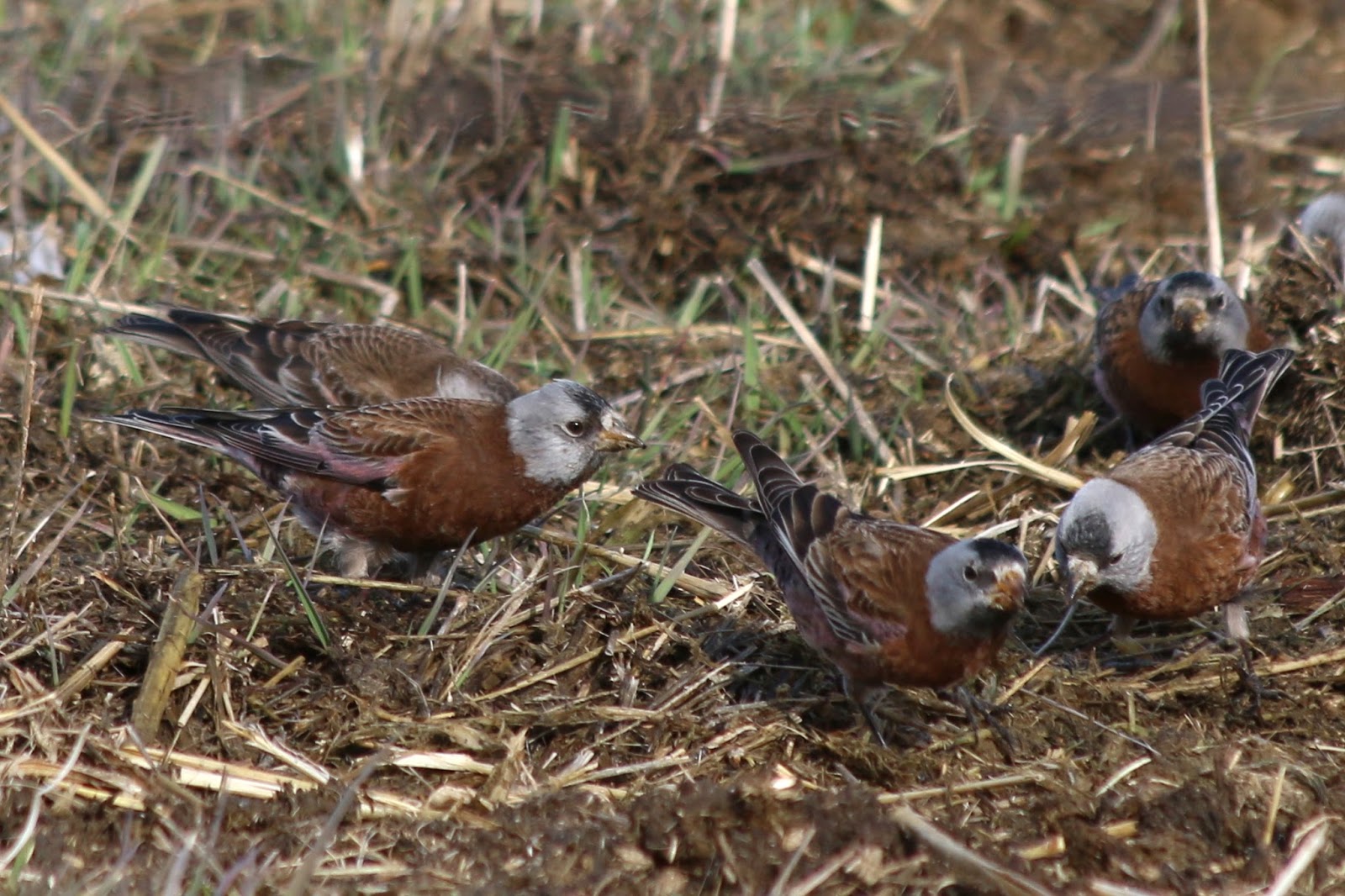 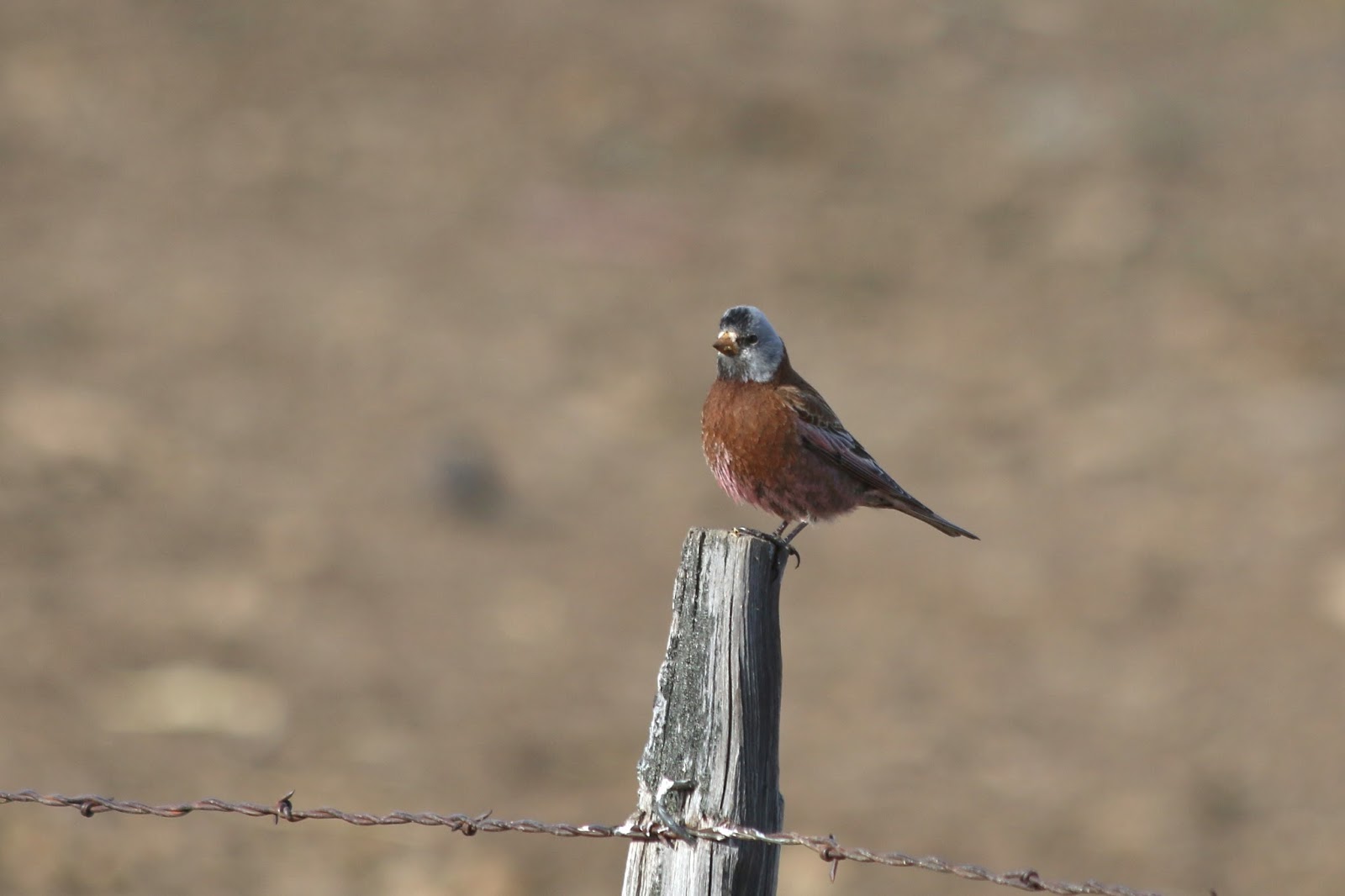 I continued up the road and found a lone American Tree Sparrow keeping a low profile in some branches.  Black-billed Magpies were a bit more accommodating for photos. 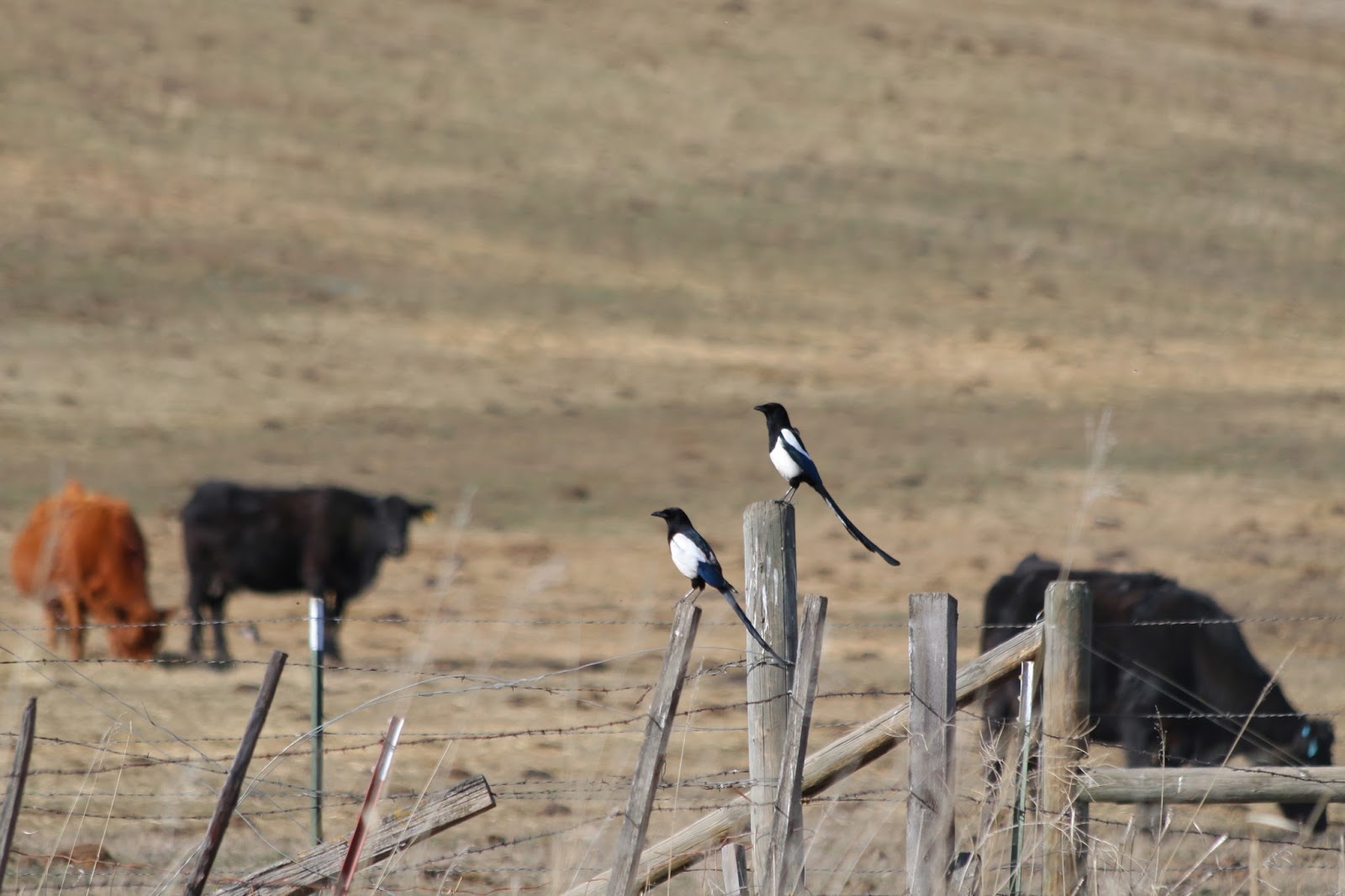 A gorgeous light Rough-legged Hawk was soaring over Leap Lane, occasionally and somewhat casually harassed by a Red-tailed Hawk. 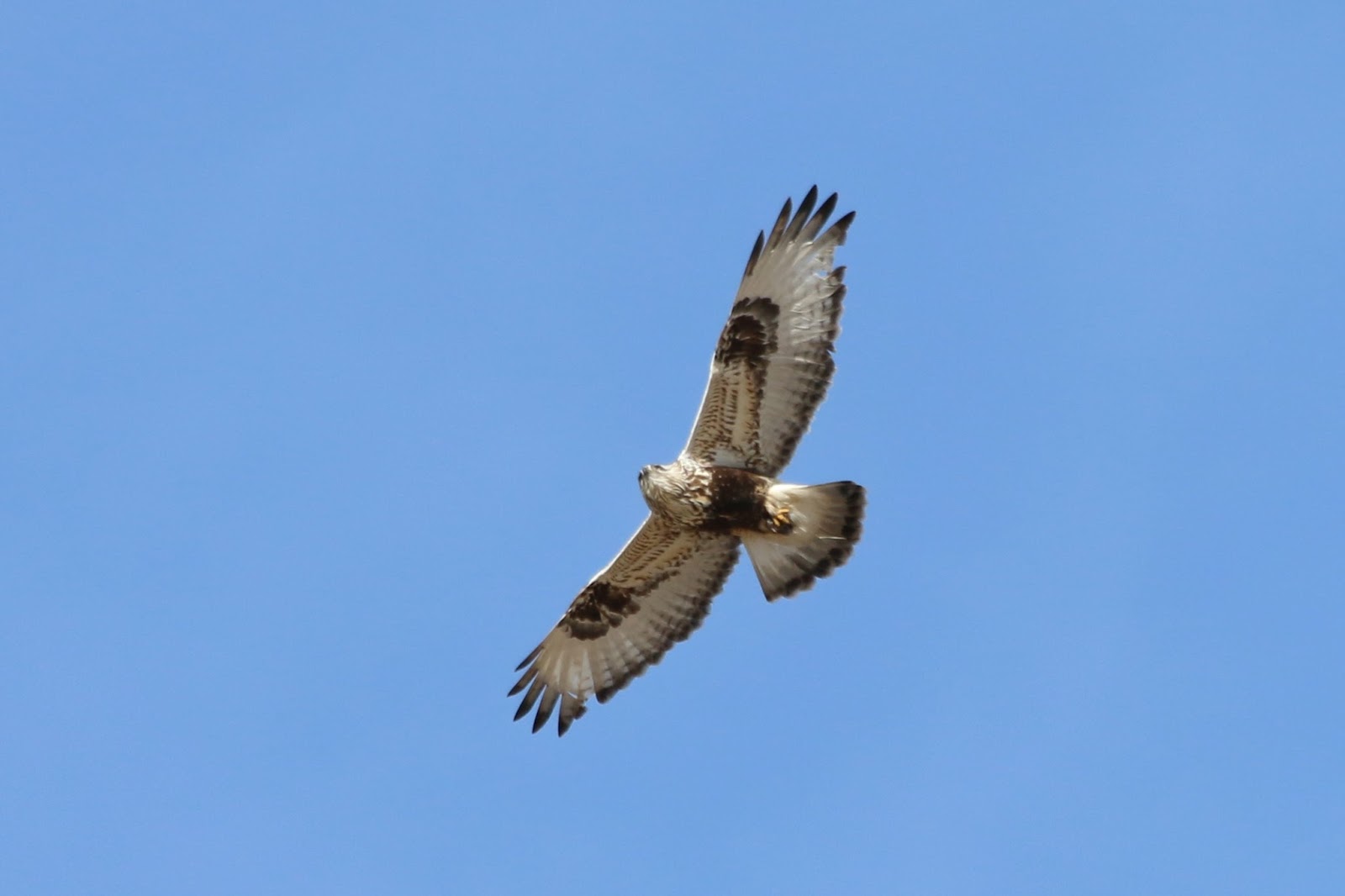 After Leap Lane I headed back to the Gyrfalcon area to give it another go.  I came up empty again,  and finally accepted the dip.  This was the third time I had gone looking for a Gyrfalcon and struck out.  Three searches does not a nemesis make, but I feel like I'm on a good path.

I headed back to Enterprise to pick up some snacks at the Safeway.  Seriously, where is the freakin hummus in that store?  And why was the Def Leppard fan in front of me in line spending $47 on fancy candles and nothing else?  From Safeway I drove up Golf Course Road to see if anything interesting would appear just before dusk. 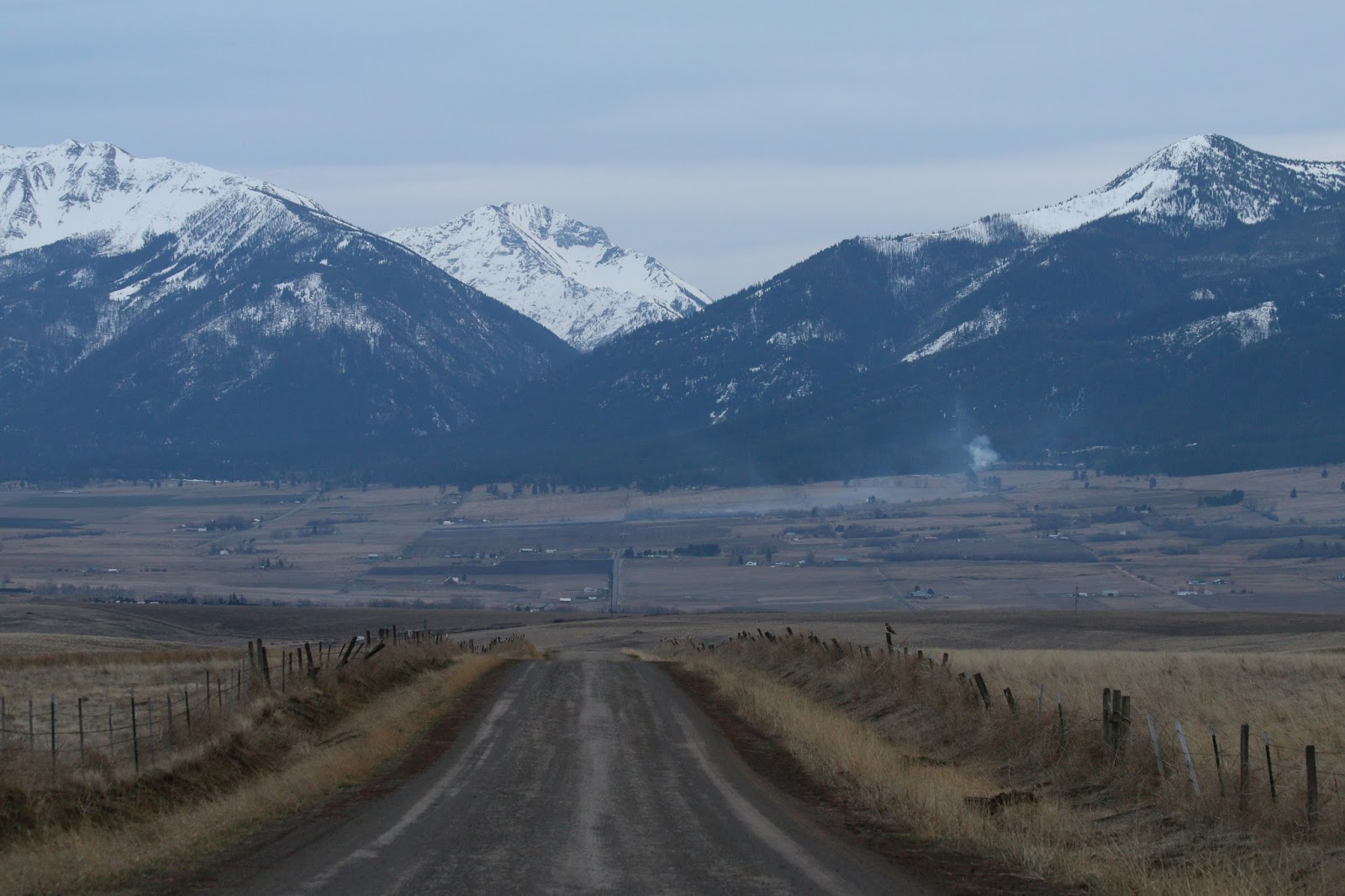 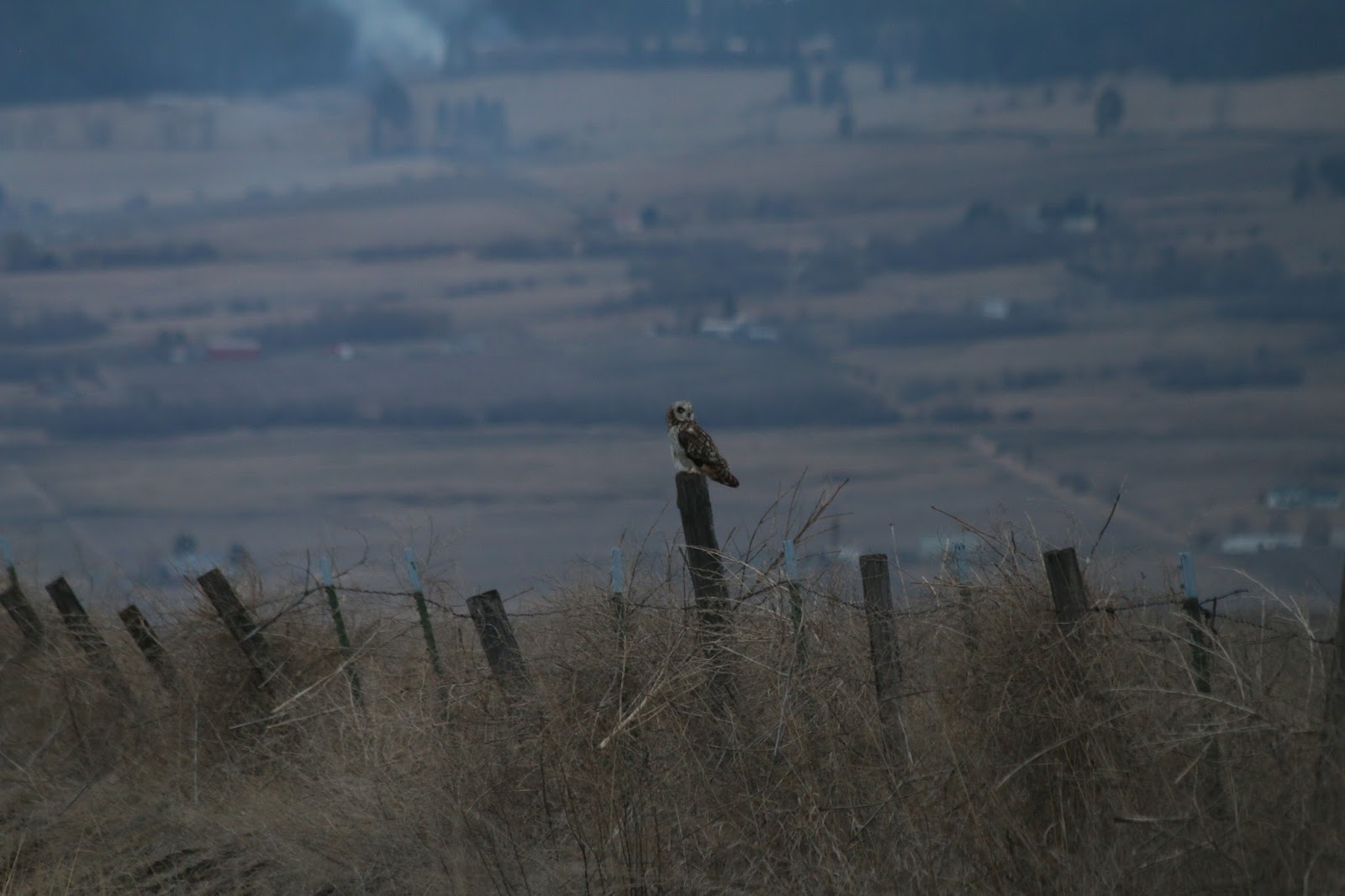 Neat.  There were actually two Short-eared Owls, occasionally taking breaks from hunting the fields to perch on the fence posts.

I continued up the road and found a dead dog laying in the grass.  I poke dead things all the time, and few make me sadder and angrier than pet dogs.  This fella had a choke chain on but no tags, obviously someone's pet at some time.  The head, paws, and tail were all in tact, though everything in between had been eaten, and the ribs were fairly clean.  Heart-breaking.  I'll spare you the photos. 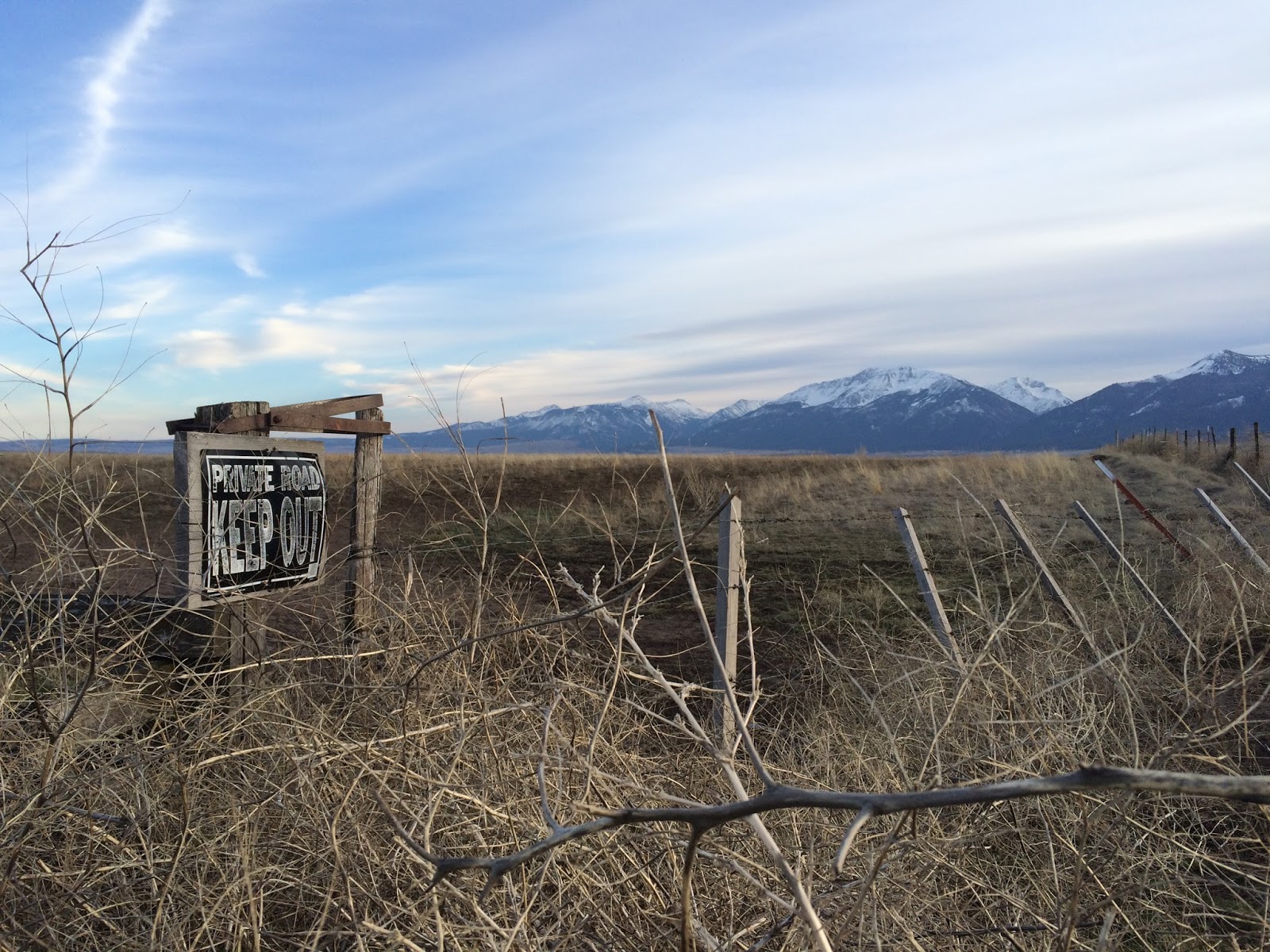 I sat for awhile to eat my Safeway bagel and decide my game plan.  It was dusk and I was feeling that extreme guilt one feels for driving far for one bird and then not finding it.  I decided to head back to Pendleton for the night and then go back to Plan A and explore Gilliam County.

My first area to explore the next day was Wehrli Canyon, about six miles south of Condon.  There was very little traffic and I was able to go slow, get out and wander, go some more, adding lots of birds to my Gilliam list.  A Canyon Wren sang from the canyon walls before the road rose out into what I think were wheat fields. 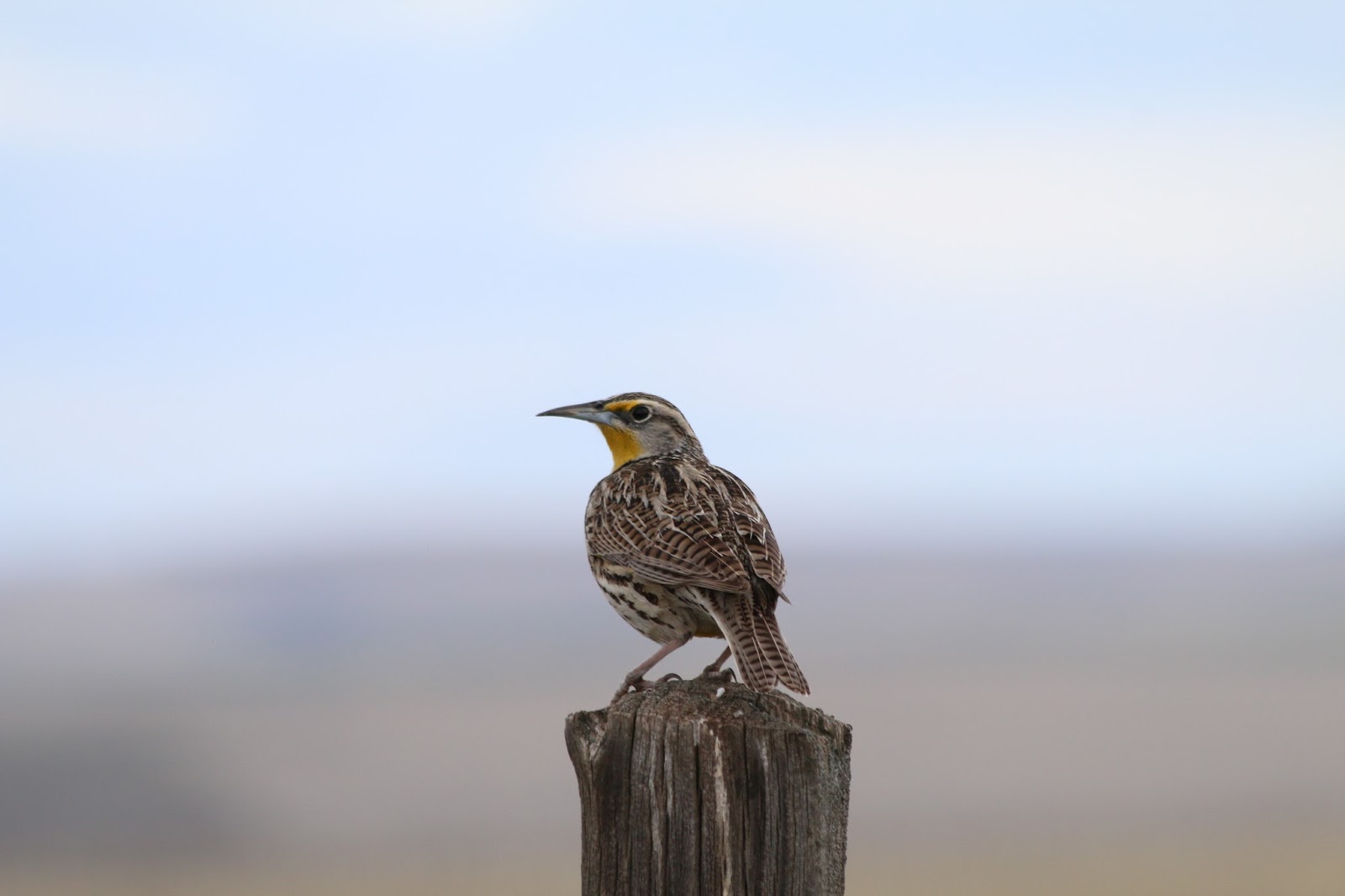 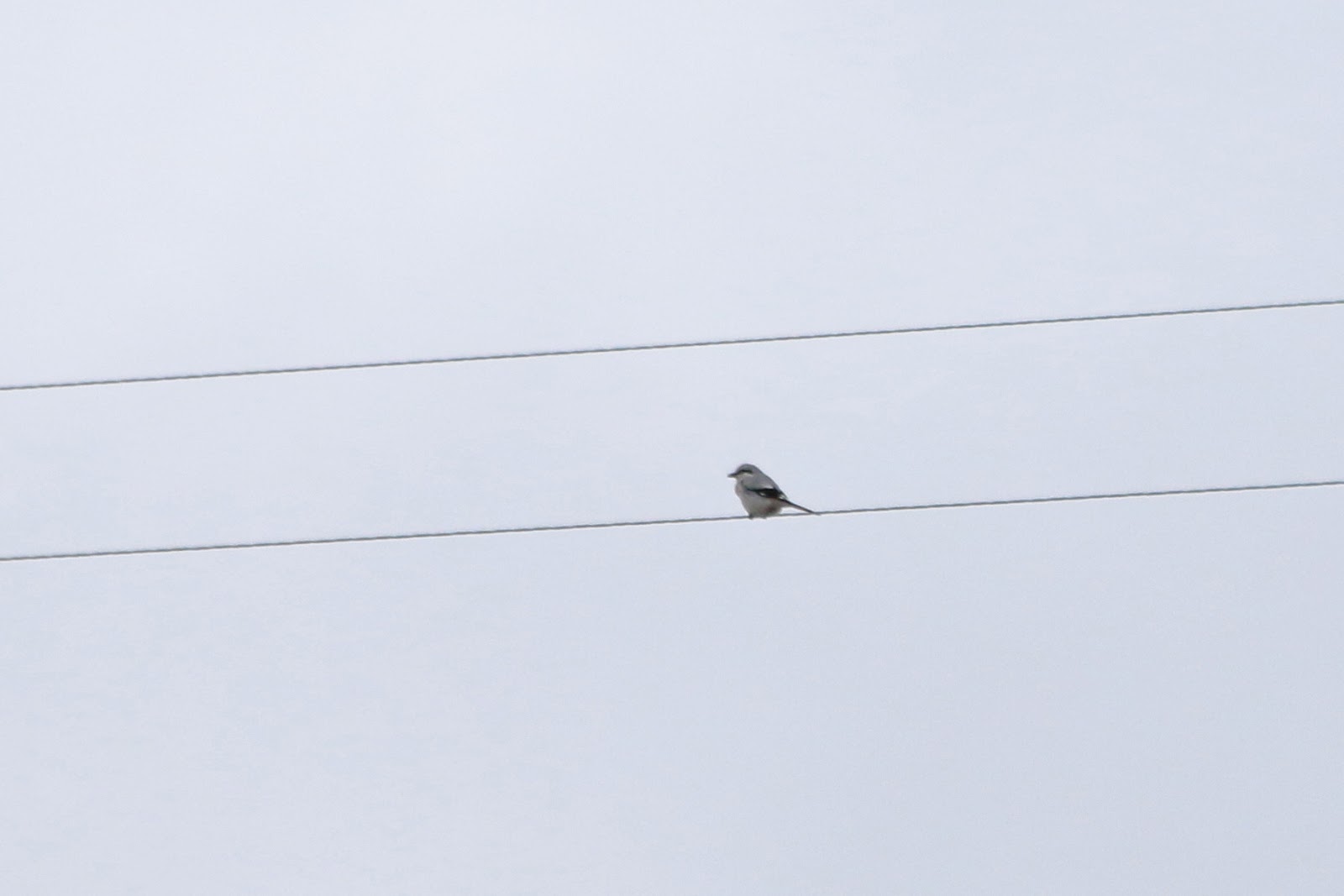 I took the turn off Wehrli Canyon Lane onto Quinn Road and continued all the way back to 19 in Mayville, a really nice possible loop. 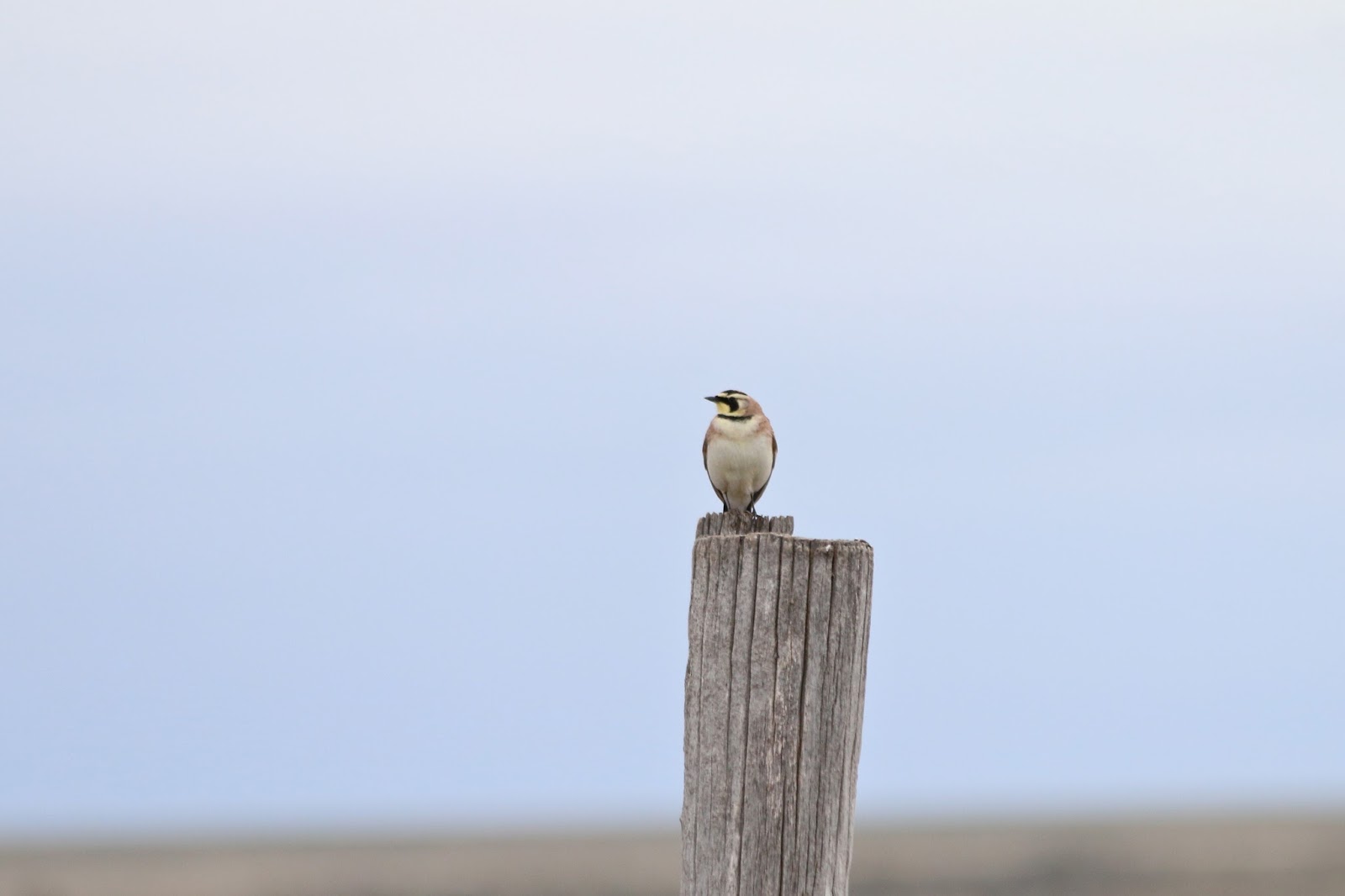 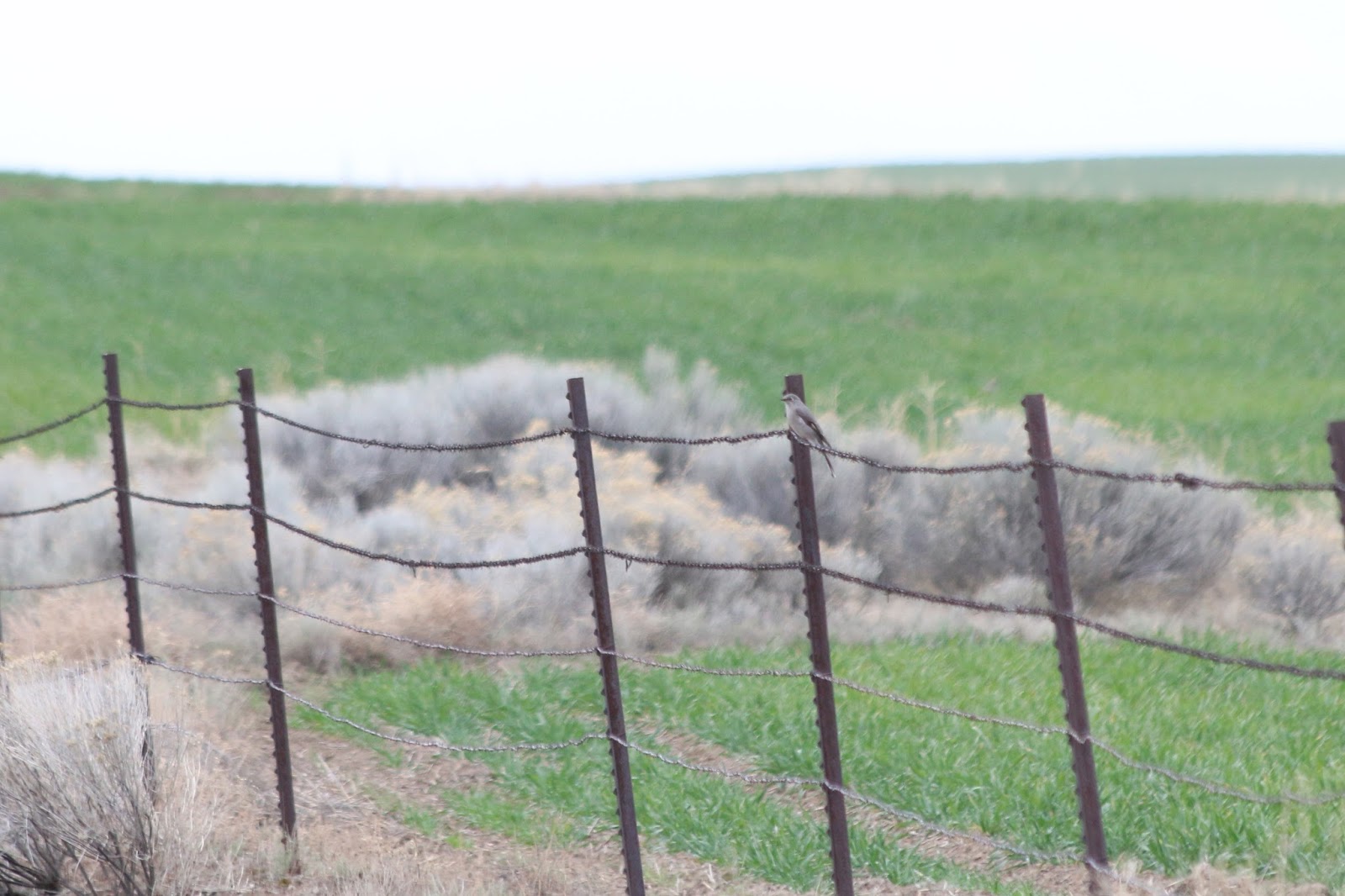 I was surprised to not find any bluebirds along this route, or even anywhere else in Gilliam.  There aren't many records in eBird either, but Gilliam is not birded frequently.

As I drove along Quinn I flushed a handful of Eurasian Collared-Doves from the powerlines near someone's house.  I was busy checking off American Goldfinches on the other side of the road, and when I looked back over I found this scenario: 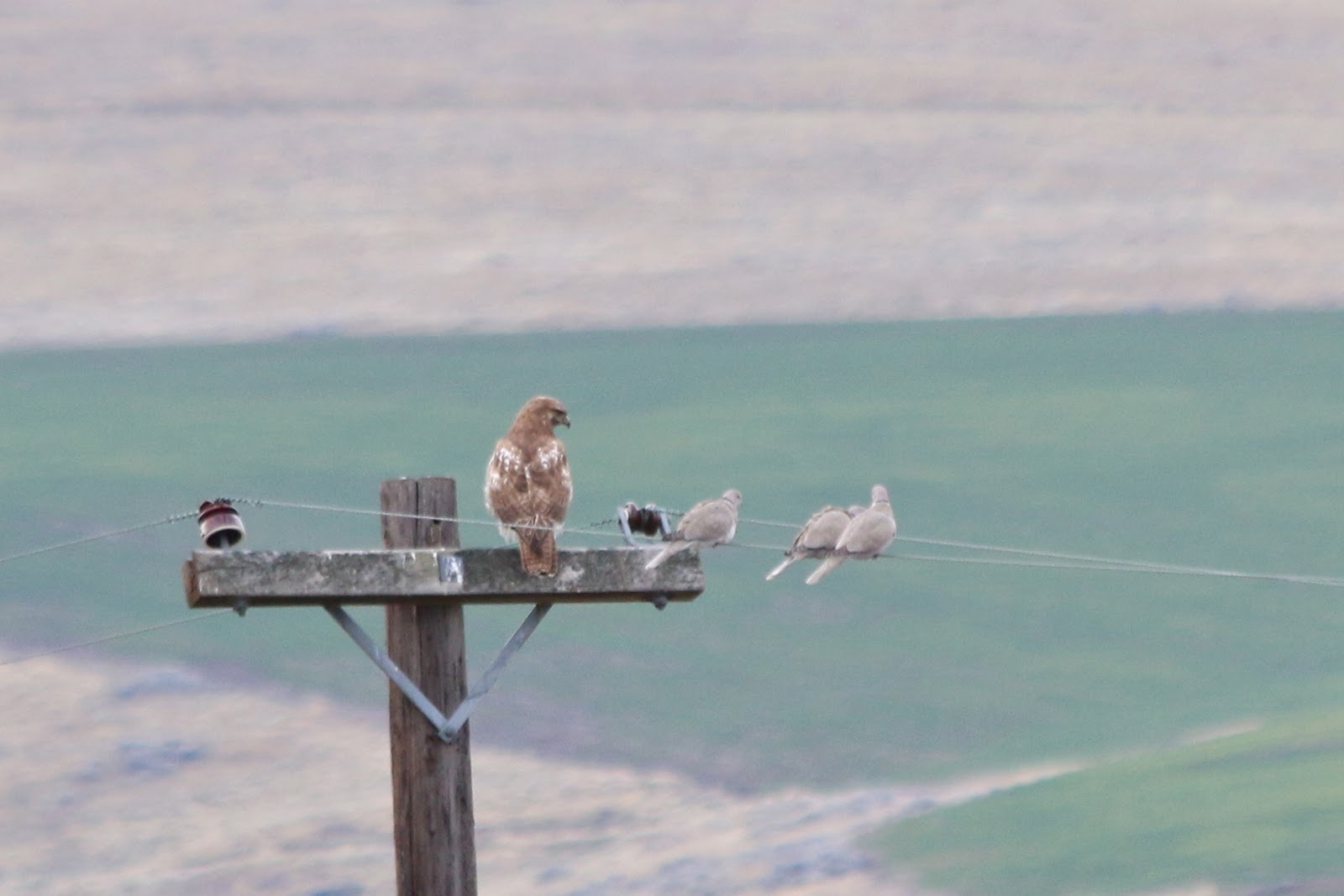 Awkward.  I have trouble imagining how this would even happen.

From this area I drove Carter Hill Road and Ramsey Canyon Road, prime areas for Rough-legged Hawks.  The dogs were bored as hell by then so I decided to visit Cottonwood Canyon State Park again where they could come along for a long walk.

The trail winds along the canyon wall, along the John Day River, and then breaks away from the canyon into open grass and sage.  It's a stunner.  The only new Gilliam bird I had here was Bushtit but I was dreaming of the birds that would arrive in a month or two. 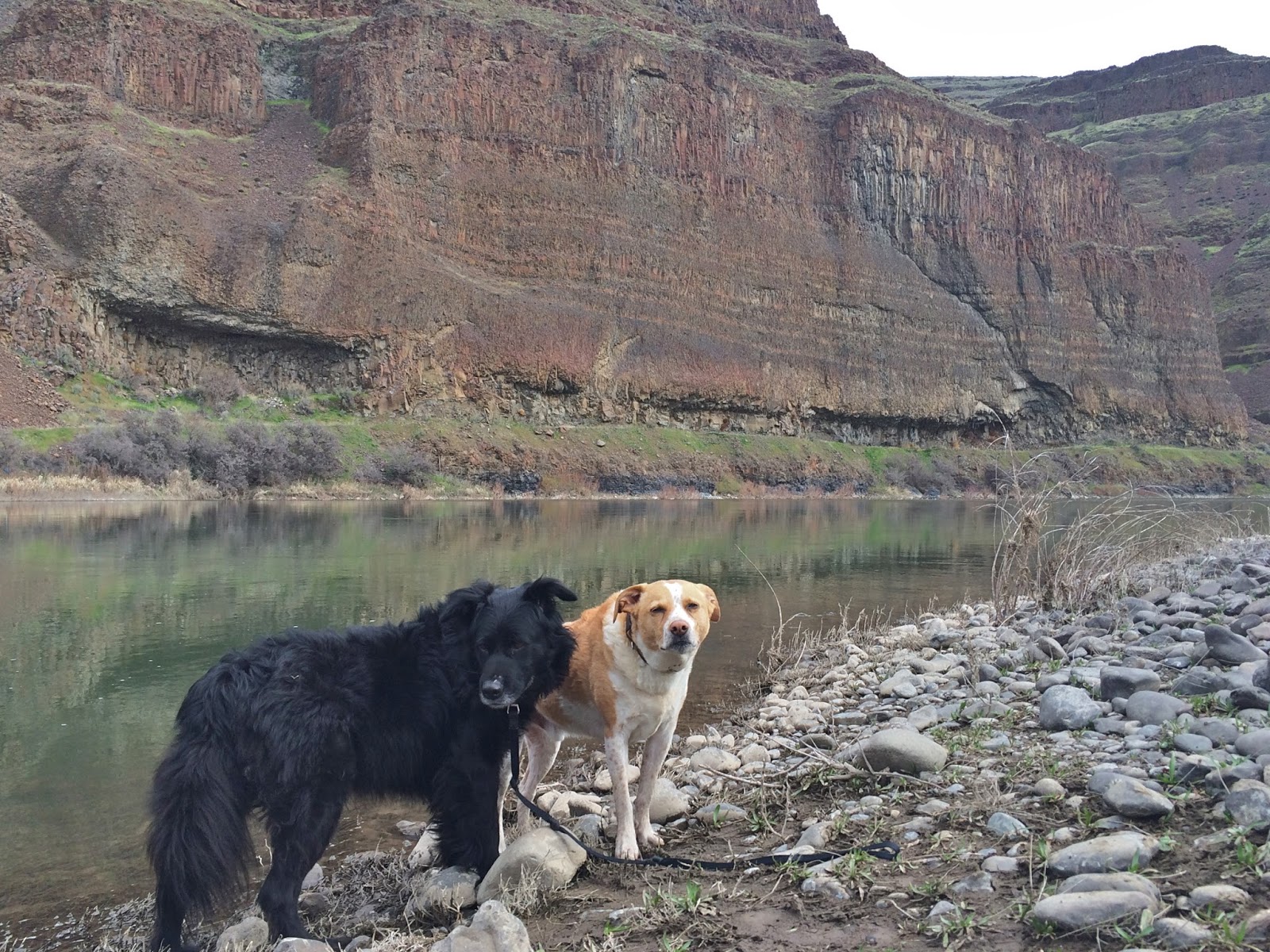