Camping in the middle of nowhere. 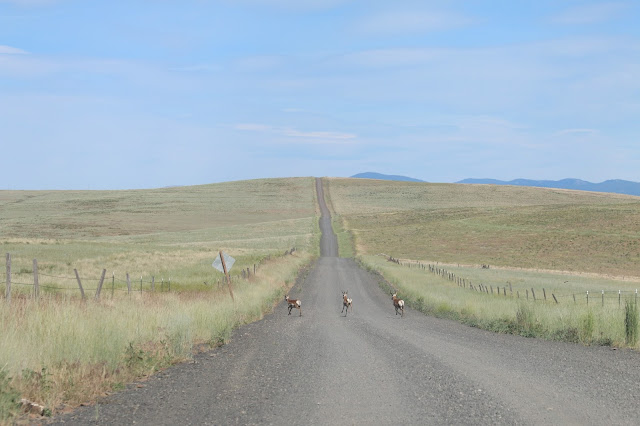 I thought I had a good plan for camping with my friend this week.  There were a bunch of spots I wanted to bird in Gilliam County, and then figured we could dip down to the Umatilla National Forest for the night.  It all made sense.

We left Portland Wednesday morning and made our first stop in Wasco County for White-throated Swifts and nesting Peregrines. 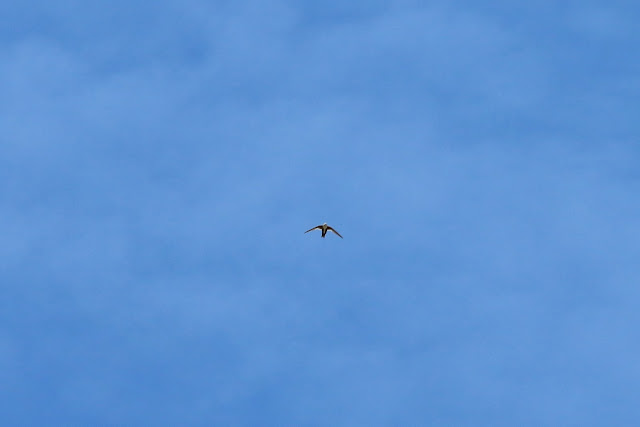 We even witnessed a mid-air food exchange between the adult Peregrines. 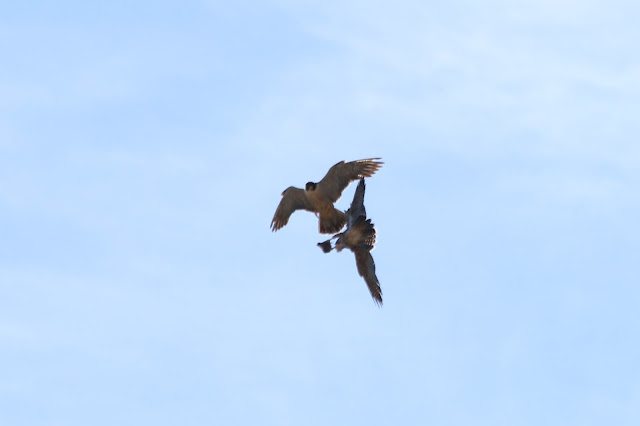 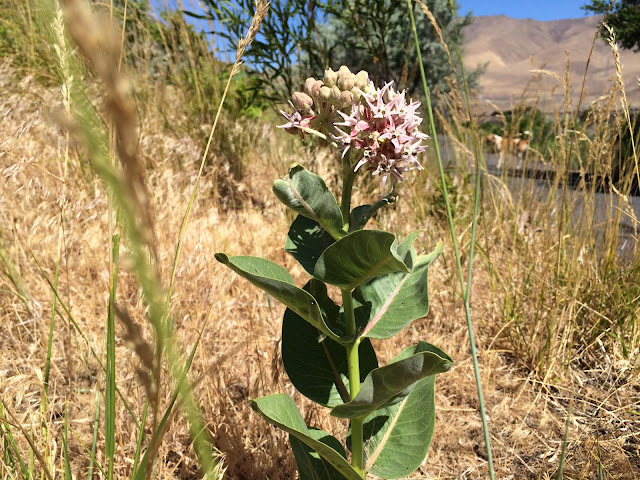 We continued driving east, down into Sherman County, across the John Day River to Gilliam.  And then it occurred to me.  "Oh my god," I said.  "I forgot the tent." 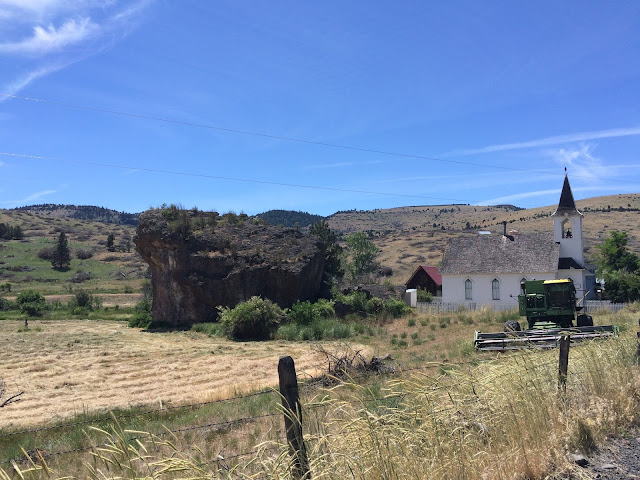 The lone rock of Lonerock, Oregon

Gilliam County was hot, too hot for Jake to walk around.  We decided to drive straight to the forest where we could at least get some shade.  A rocky road out of Lonerock would get us there in just 8 miles. 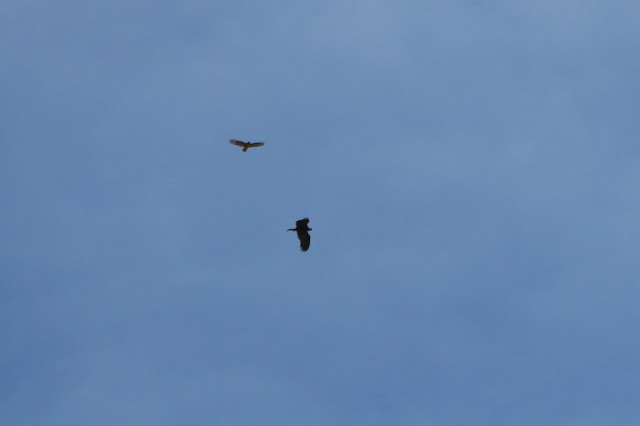 The road seemed so promising until boom, a fence.  Across the road.  We had to turn around. 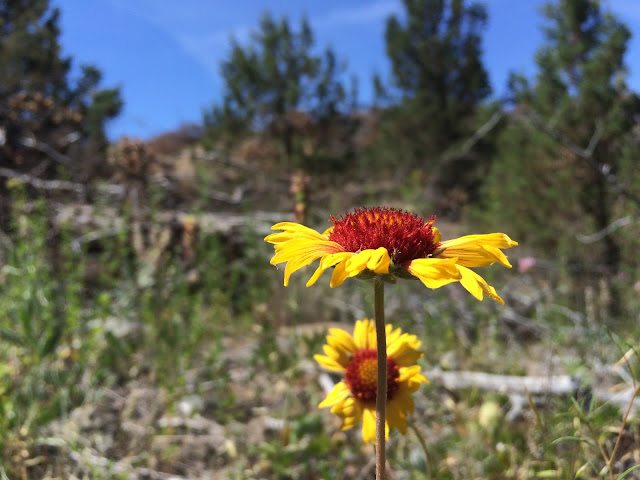 We drove back up to Lonerock for Plan B:  the much longer route up Buttermilk Canyon, over to 207, and south to the forest.  Buttermilk Canyon turned out to be awesome although still super hot. 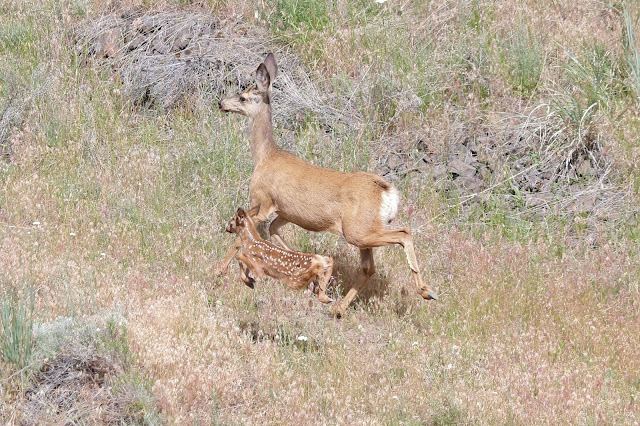 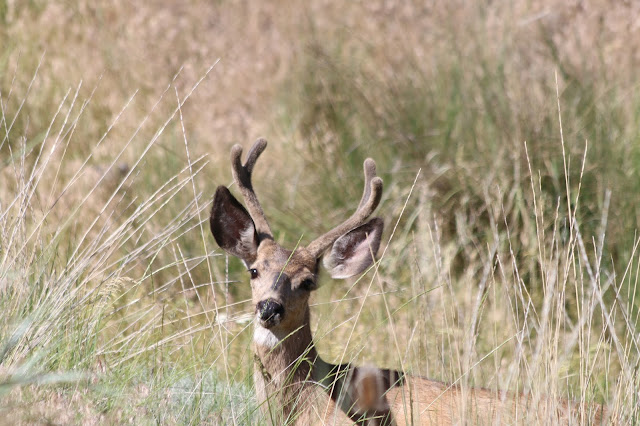 We stopped at a little watering hole that was too gross to let the dogs drink from, but good enough for the Killdeer and the dragonflies. 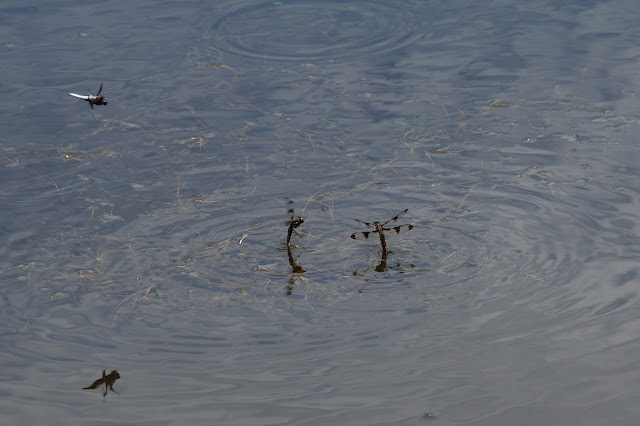 In the more canyon-y part of Buttermilk Canyon Road we came across a couple of Canyon Wrens.  Go figure. 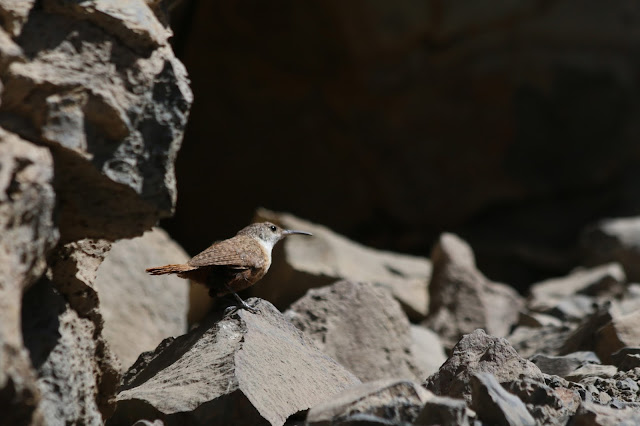 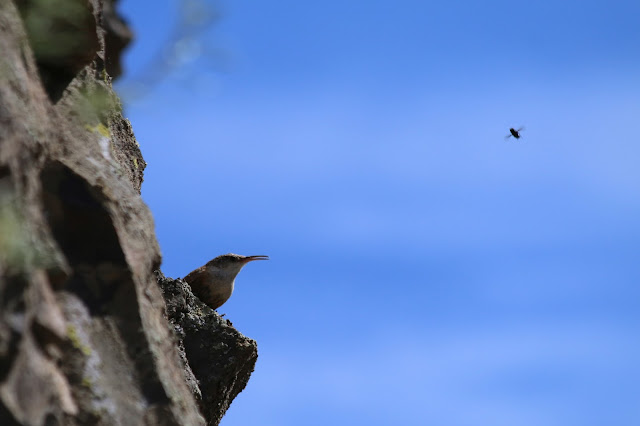 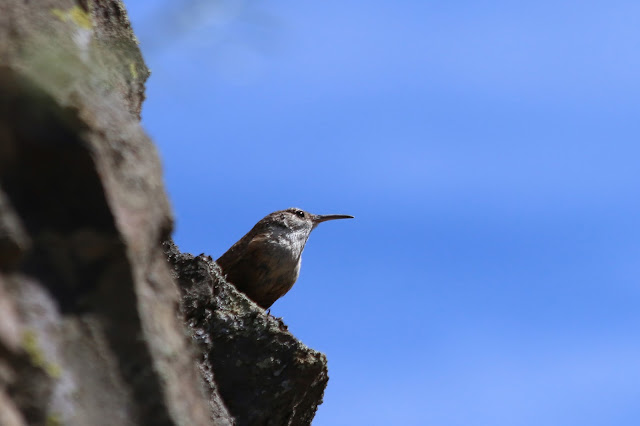 Eventually we made it to 207 and drove south into the Umatilla National Forest, picking a random forest road to make home for the night. 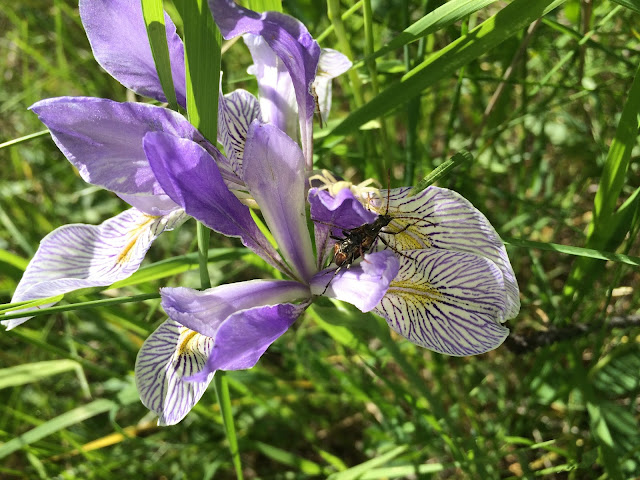 Without a tent there wasn't much to set up. 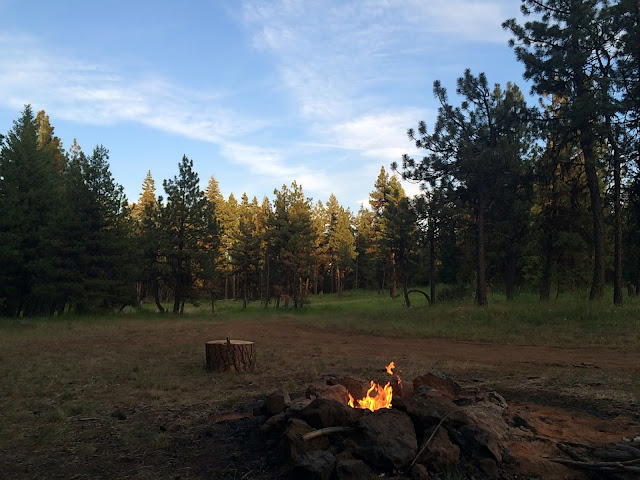 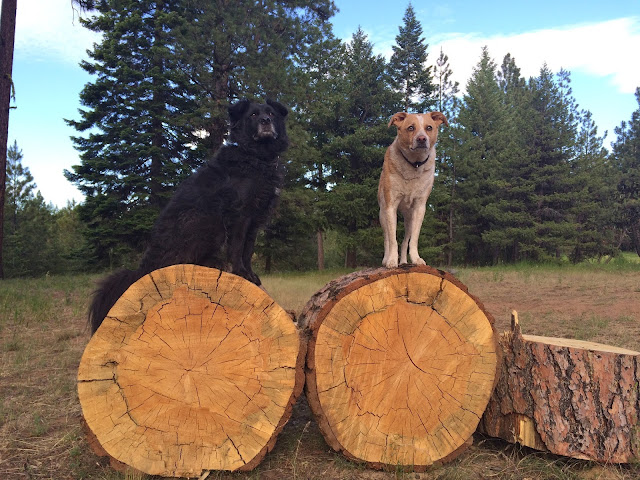 Cassin's Finches and Steller's Jays were the more common visitors, while the loudest sounds came from nearby cows.  We slept in my friend's truck that night, crammed on the dogs' beds with the dogs.  Not exactly comfortable, made worse by a splitting headache and no painkillers anywhere.

In the morning some clouds kept things cool initially and we headed back towards Condon for coffee and ibuprofen.  Near Ruggs at the intersection of highways 206 and 207 we found a Chukar chilling on the side of the road. 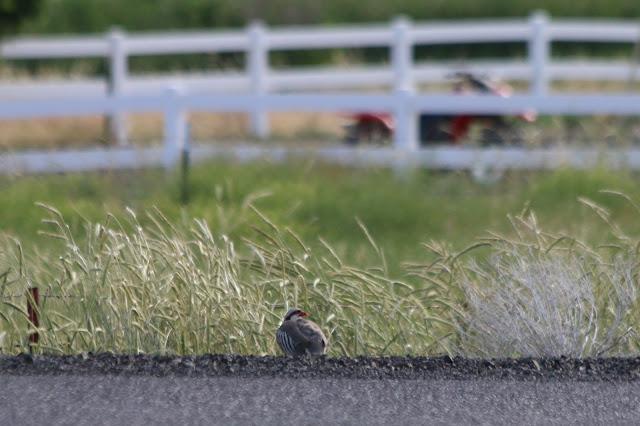 A nighthawk flew over, then a harrier carrying a dead bird.  A couple of deer crossed the road right by a deer sign.  It was a cool little spot.  We continued west on 206 towards Condon until we saw big ole rattlesnake in the road. 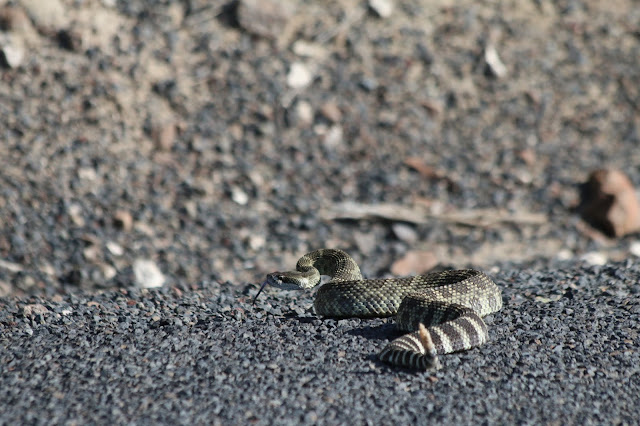 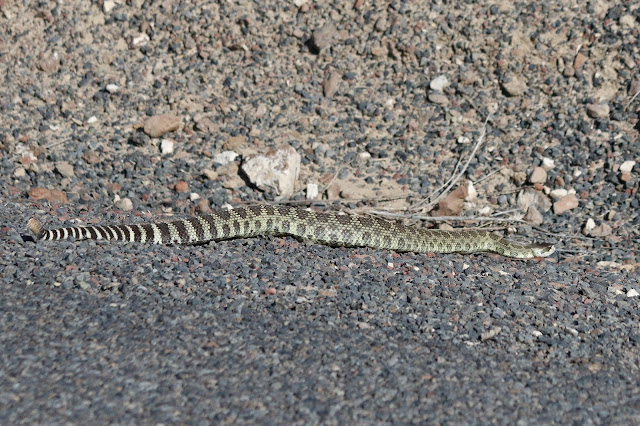 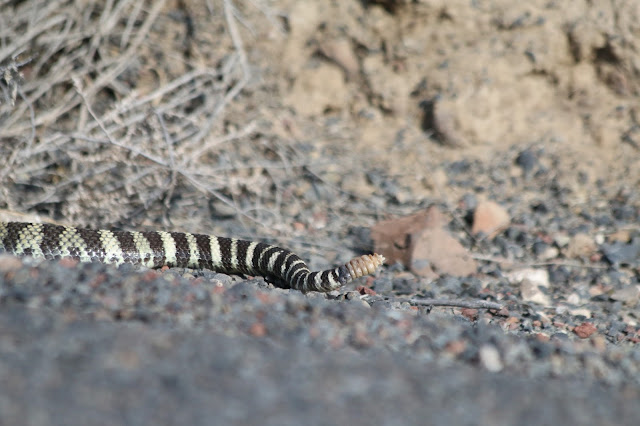 So cool.  We made it to Condon, cured my headache with ibuprofen and coffee, then headed south to Wehrli Canyon.  I picked up some new Gilliam County birds along here including Yellow-breasted Chat, Western Kingbird, Common Nighthawk, and Lazuli Bunting.  Along Quinn Road I picked up Gray Flycatcher and Cliff Swallow.  It was already too hot for Jake's tender feet and he waited in the truck with a tennis ball for company. 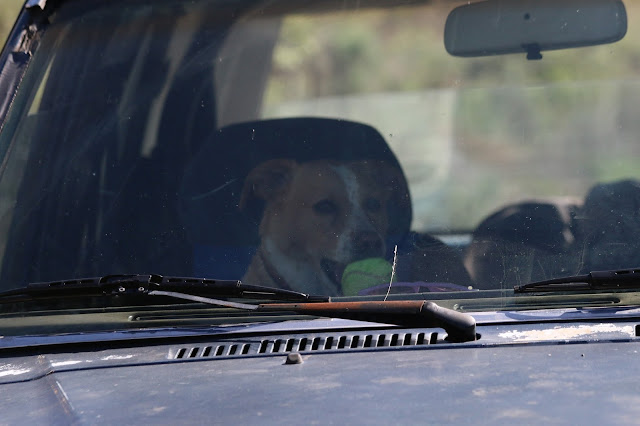 At Dyer State Wayside this cute little beetle landed on my filthy glasses: 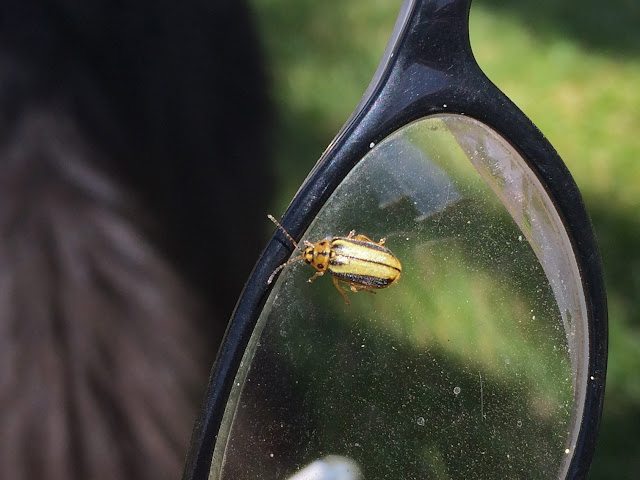 Trirhabda or some other leaf beetle

We headed back home soon after this... 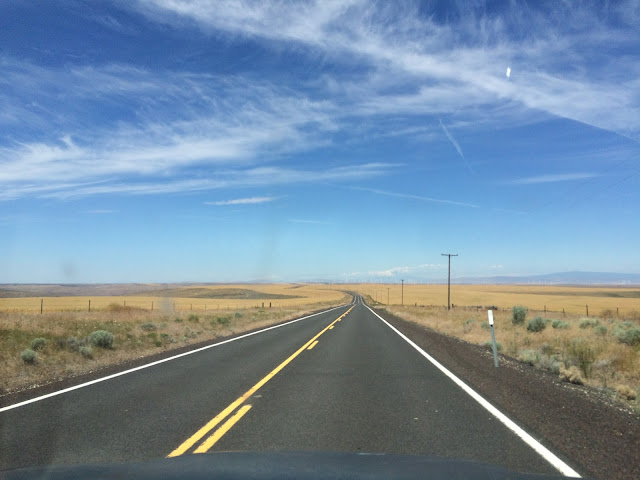