on July 17, 2015
Summer birding is hard.  It's generally too hot and too sunny and too... ugh.  We've been getting a break lately though, our mornings have been cooler and cloudier and conducive to moving around a bit without soaking ourselves in sweat.  I even went for a bike ride last week and picked up seven more motorless birds for the year. 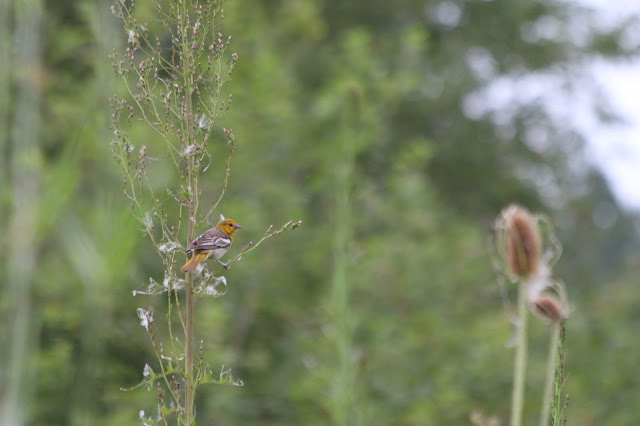 On Tuesday I set off on a mission to track down a couple of state birds in Umatilla County.  My coworker had recently been out to Cayuse Road and mentioned the piles of Veeries and Gray Catbirds, so I knew I had to get out there. 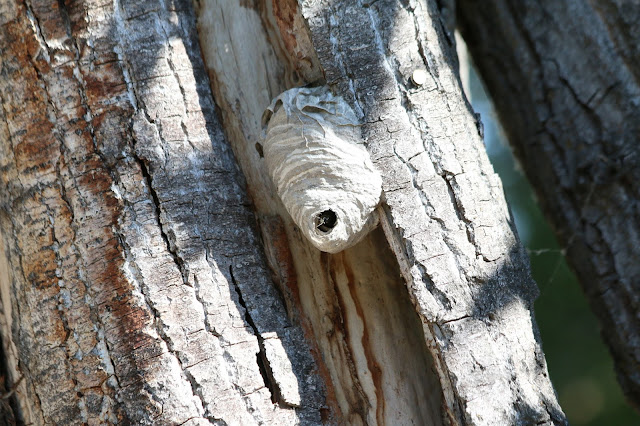 One of the first places I stopped along Cayuse Road had meowing catbirds... 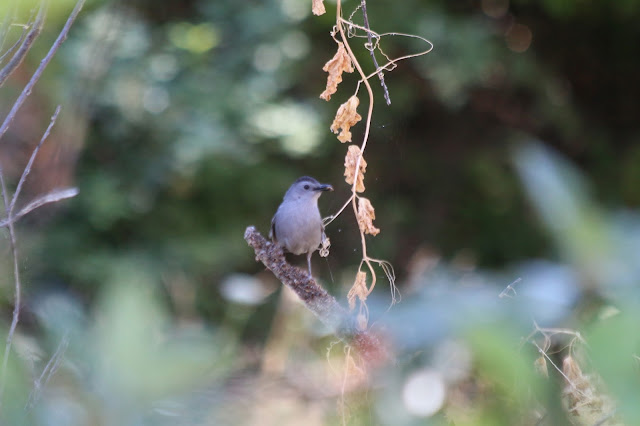 My coworker had recommended a particular spot for the Veeries and my first attempt there was a failure.  I explored up and down the road and returned a second time and immediately heard one singing.  I jumped out of the car to record it, heard it maybe twice more, then not one more peep.  The recording can be heard here at :06-:09. 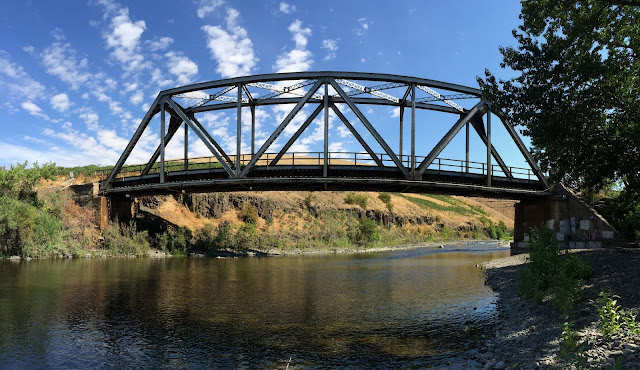 I stopped at Willow Creek WMA on the way back but the ground was too hot for Jake to walk on, so we didn't make it past the shady area of the boat launch. 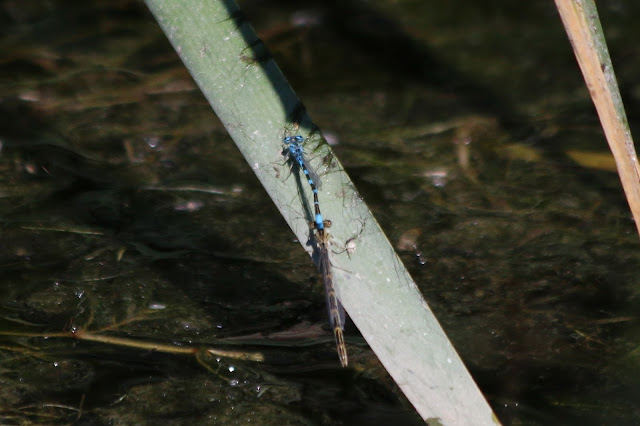 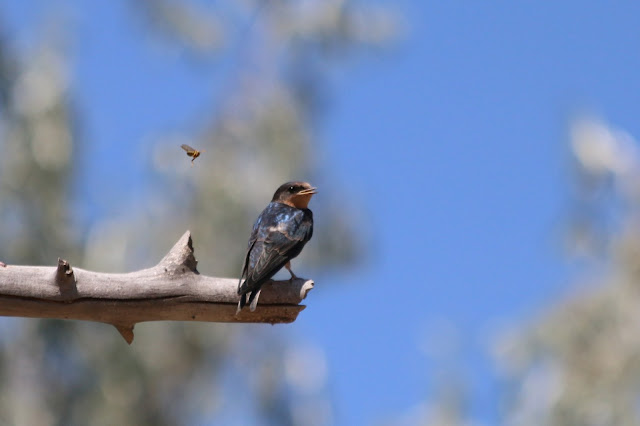 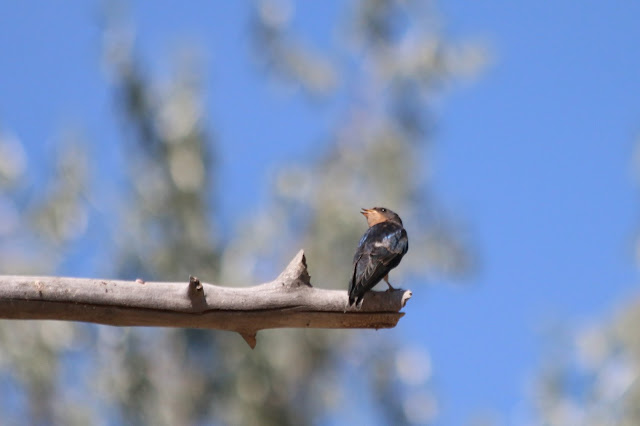 Yesterday morning I went up to Ridgefield with very low expectations, because summer.  I feared the most interesting thing to be seen would be this tame-ish bunny: 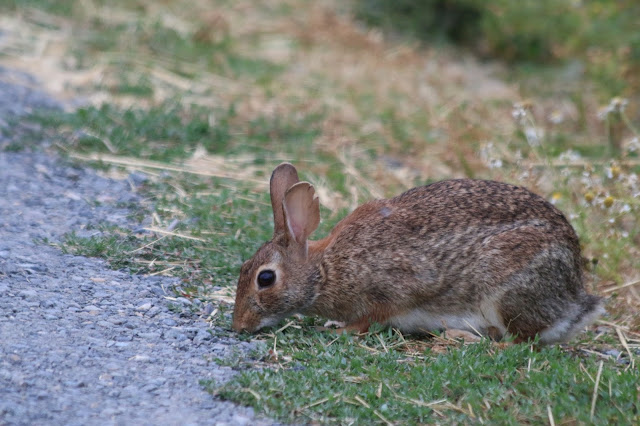 Thankfully this was not the case.  As I drove along through the ash forest I noticed a heron down in the muck with some kind of prey. 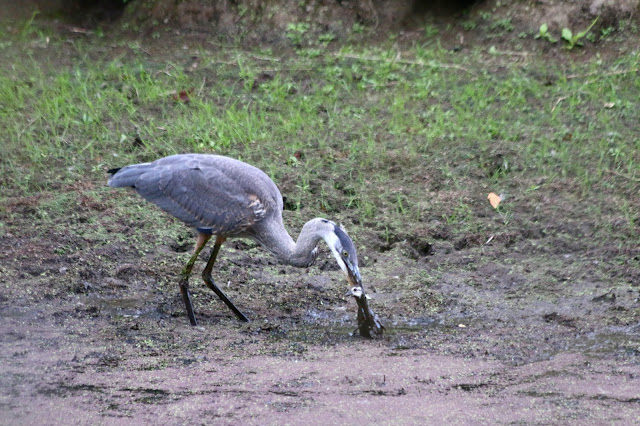 That heron had itself a duckling.  It was brutal.  The duckling was still alive, and when placed back in the muck would start trying to run, only to be snatched back up by the heron.  It took about nine minutes for the whole thing to play out... 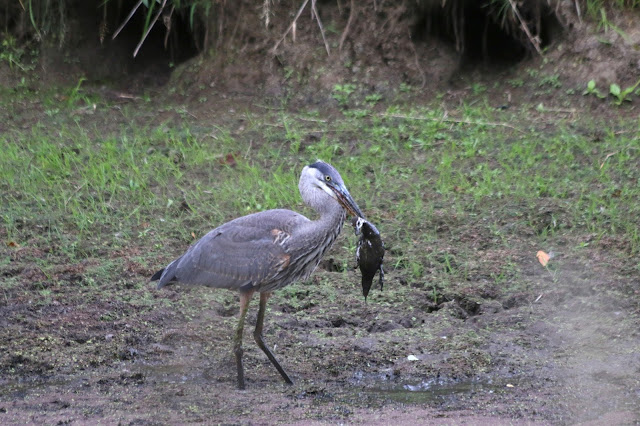 Repeated dunkings in the muck finally killed the duckling, and the heron was able to shove most of the bird in its mouth. 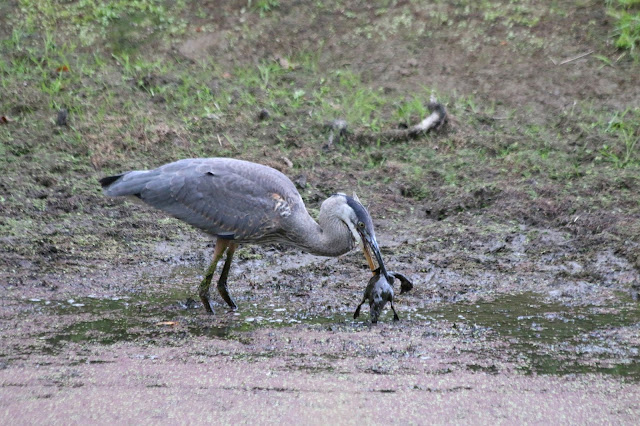 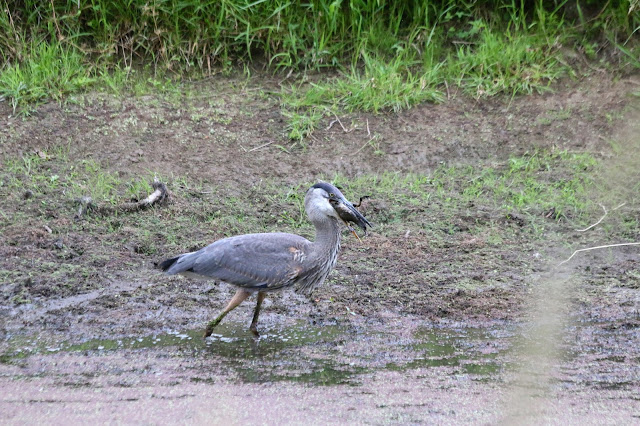 And finally, the digi-binned video of the duckling being swallowed:

For those with a morbid curiosity I have uploaded two more videos of this encounter here and here. 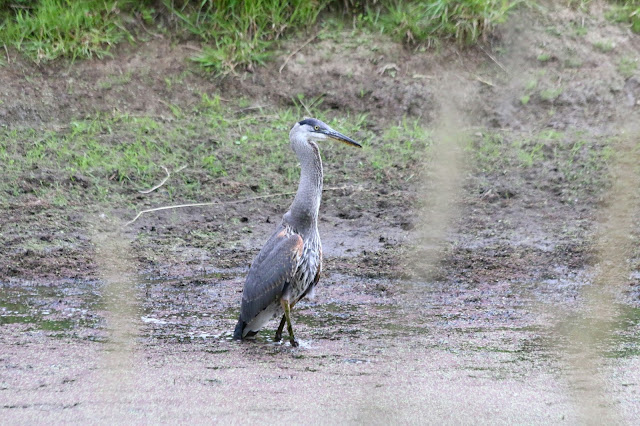 Anyone care to ID the duckling?  I was guessing Mallard or Wood Duck.

All recent reports from Ridgefield have included Virginia Rail babies.  I tried not to get my hopes up... 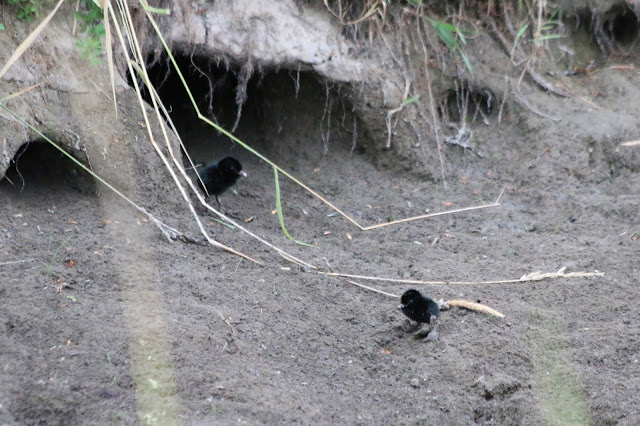 This one parent seemed to have four little babies. 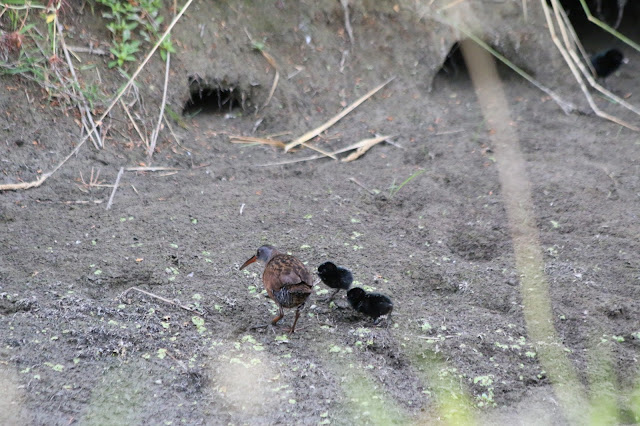 Three out of four babies can be seen here.

A deer family held up traffic by the train tracks on the way out of the refuge... 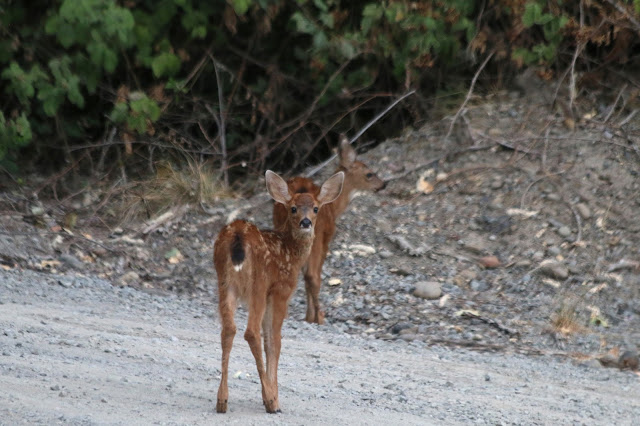 In other news I've become obsessed with the bees and other insects that hang out on my mint and in my bird bath.  There's a bit of a variety, none of which have I tried to identify yet.  My phone had been doing a decent job of capturing them... 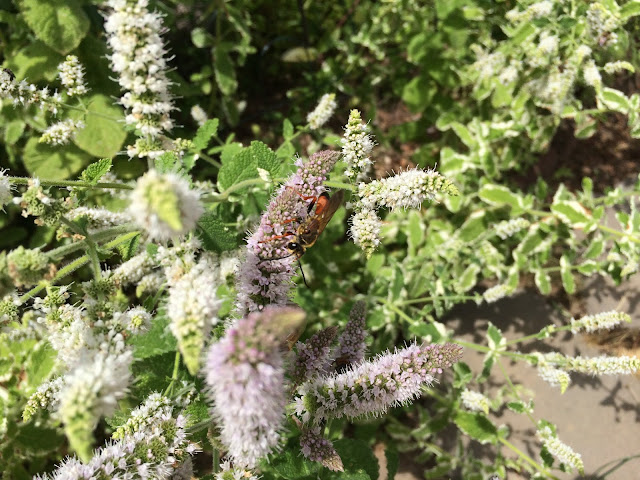 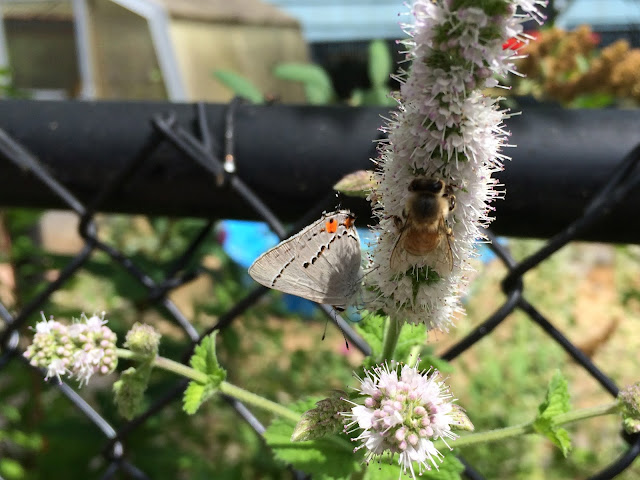 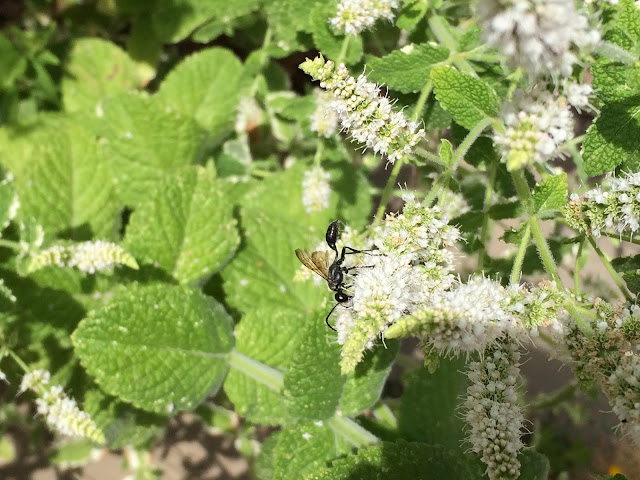 But then I remembered that I bought a macro lens a couple years ago!  I managed to find it in a closet and went to town on the bees in the bird bath. 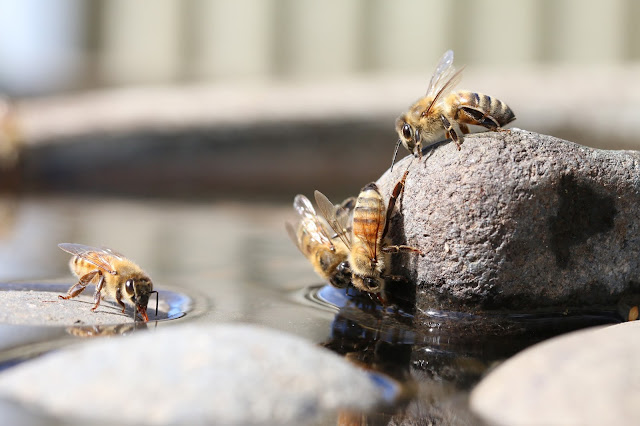 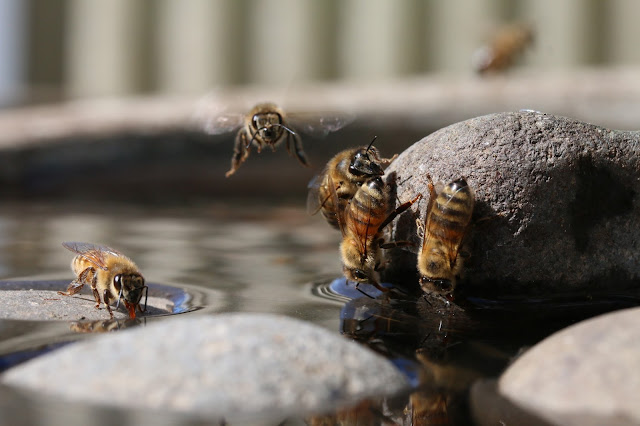 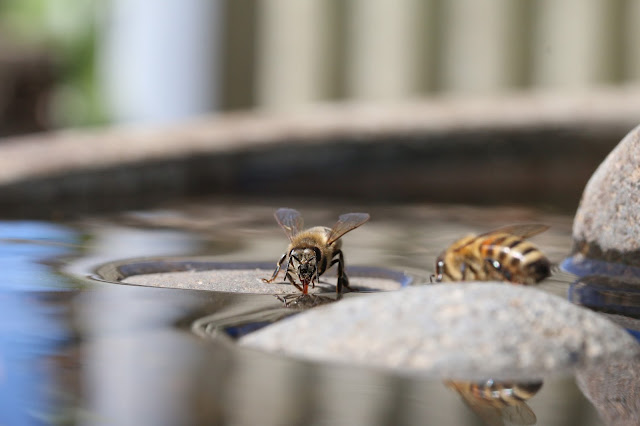