on October 02, 2015
Yesterday's plan was to head east to do some exploring, maybe look for a badger, and take some pictures.  My friend and I drove the historic highway from Mosier, stopping first at Memaloose Viewpoint.
This spot is never disappointing, even when there are no wildflowers in bloom.  In a small field just east of the viewpoint we saw the most camouflaged mantis I have ever seen. 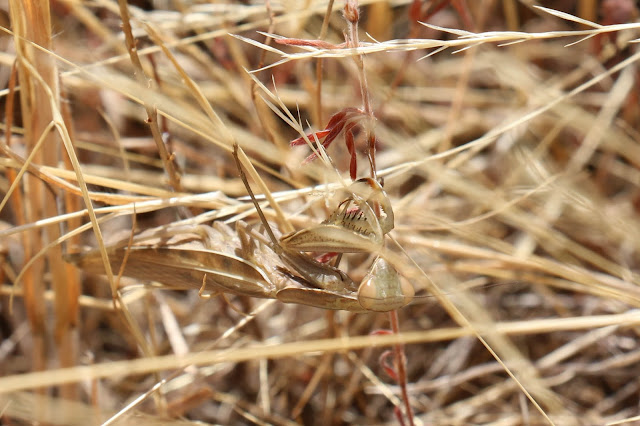 We continued on the historic highway and found a rather pristine dead western gray squirrel in the road.  So much more handsome than the damn fox squirrels, and perhaps even better equipped...ahem... 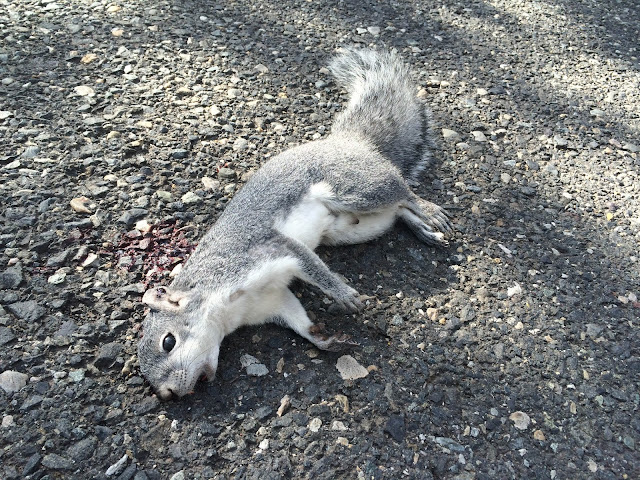 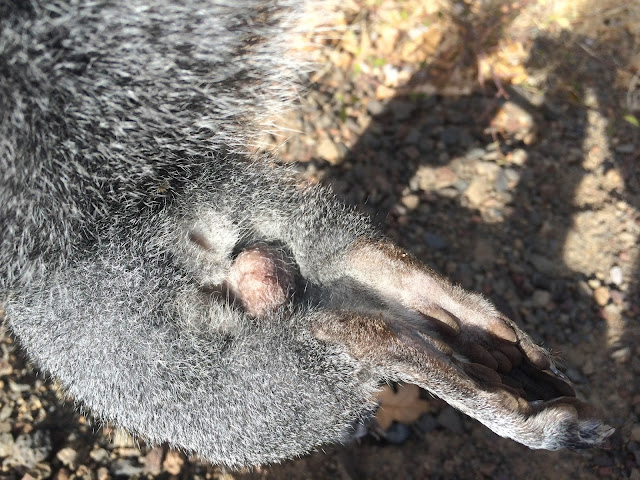 We went past Rowena Crest and stopped at a pullout on the descent.  There were trails shooting off in every direction that we needed to explore.  They might be part of Mayer State Park but I don't know for sure.  I do know the oak trees were feeling very fall festive. 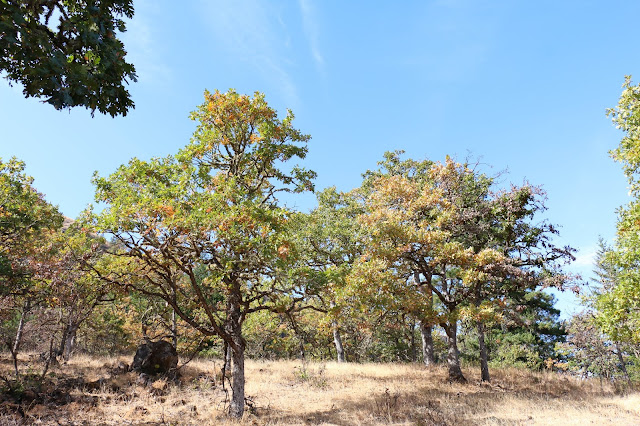 These side trails proved great for finding bones, likely road-killed animals trying to cross the highway.  This one we guessed to be a coyote: 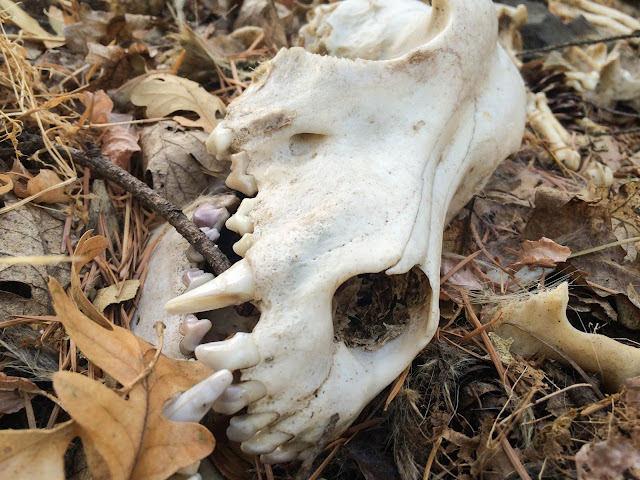 As we watched a Hairy Woodpecker fly from tree to tree a little stink bug flew up and landed on some grass near us. 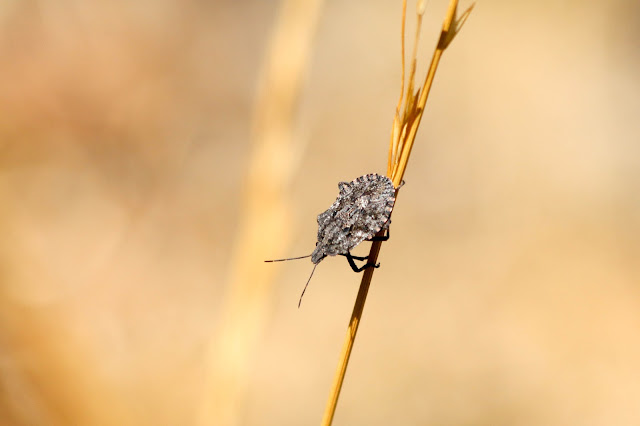 In the same area a box elder bug was flying from pine to pine. 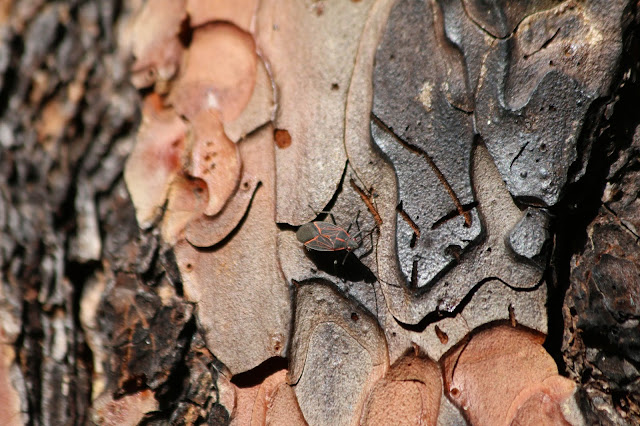 The oak trees were packed with acorns which were being devoured by Steller's Jays. 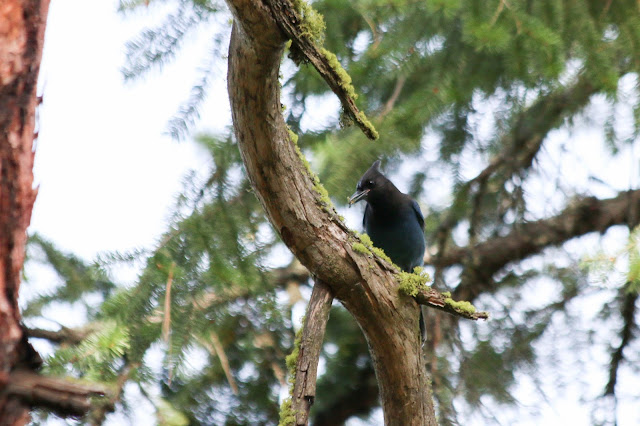 A male Hairy Woodpecker let us get rather close, and yet my photos are still bad... 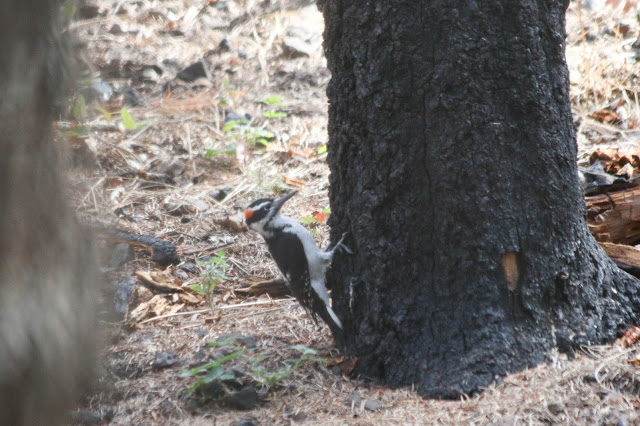 A couple of Chestnut-backed Chickadees showed up and my efforts to psh them in closer resulted in a ridiculously close-up view of a Hutton's Vireo. 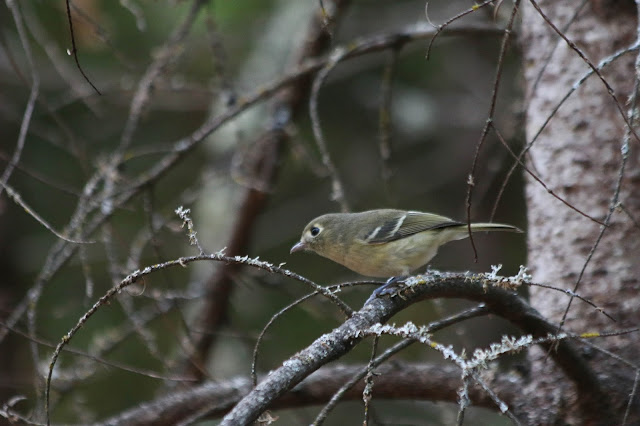 We wandered back to the car and began to explore a third trail, this one with Black-capped Chickadees willing to come down from treetops for close looks. 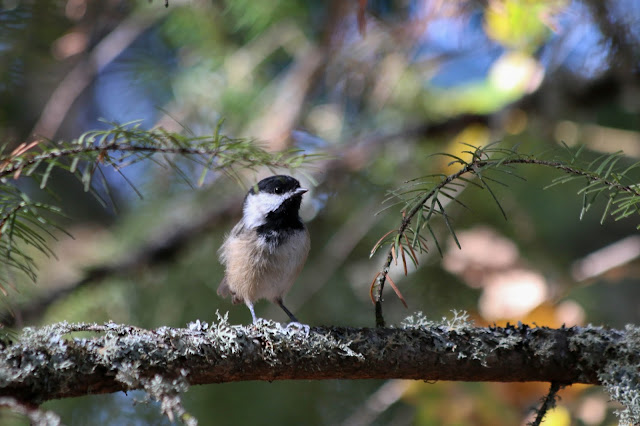 Both kinglets were also around these parts.  We went back up and ate lunch before continuing east to an area where I once saw a possible badger, Old Moody Road.  The views of the Columbia River Gorge from this road are fantastic... 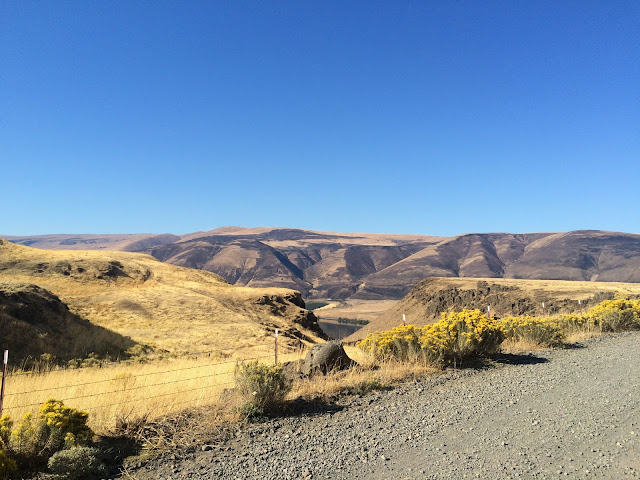 We stopped at an open structure used for storing hay to check for Barn Owls.  The beams showed tons of whitewash and I had high hopes as we crept up closer and closer.  We peered inside and...nothing.  Then my friend said "what's on that post?" and looking at a completely different post I said "oh, there's a bird on it!"  It was a Canyon Wren.  So random. 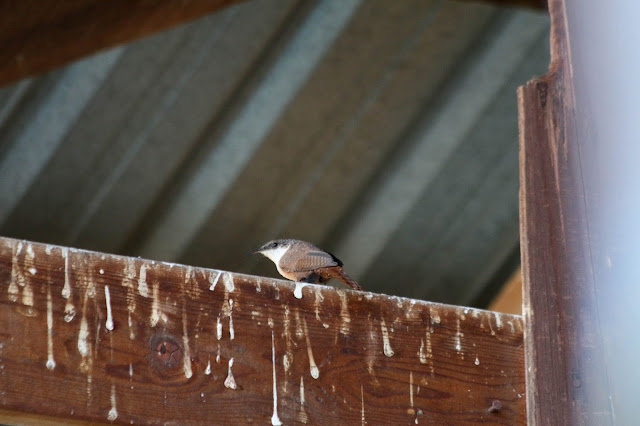 We lured it out into the open for some of the best views I've had of this species. 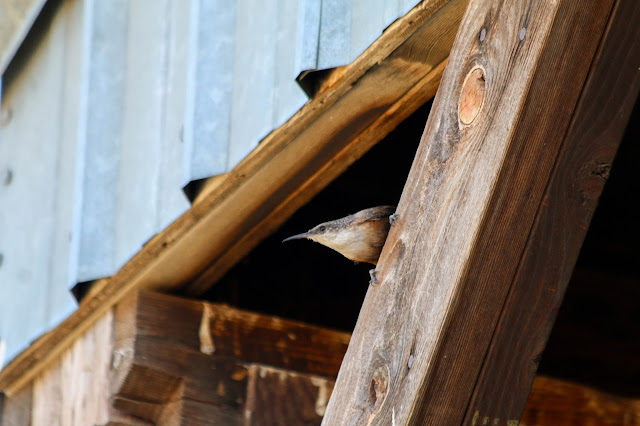 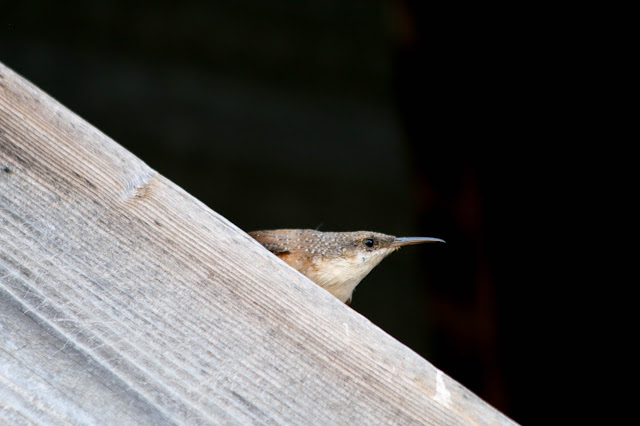 We stopped at another spot to view the train bridge that crosses the river and watch one of those Tidwater ships go under it. 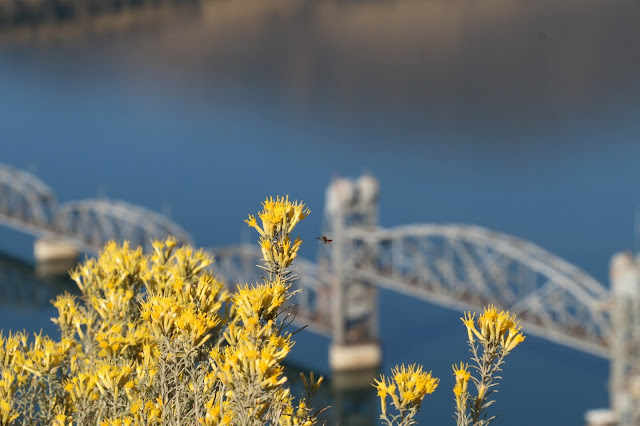 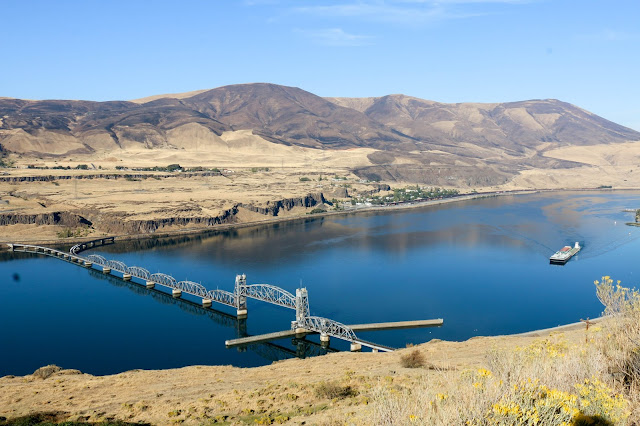 Old Moody Road descends down to the Deschutes River and we took the Celilo-Wasco Highway back west towards the highway.  There's a great place to pullover here where Peregrines nest and Canyon Wrens sing.  On this occasion I found a crazy little centipede or millipede thing. 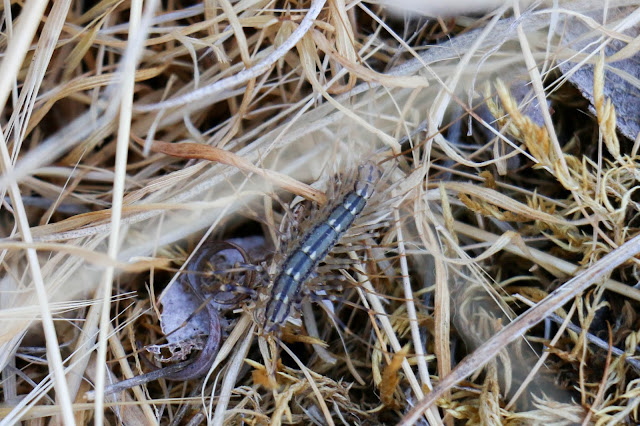 I need to look that guy up.  The Peregrines were busy while we were there, flying around with dead birds and snacking on the cliff face.  As we climbed the grassy hillside to the train tracks, one Peregrine took off with its meal. 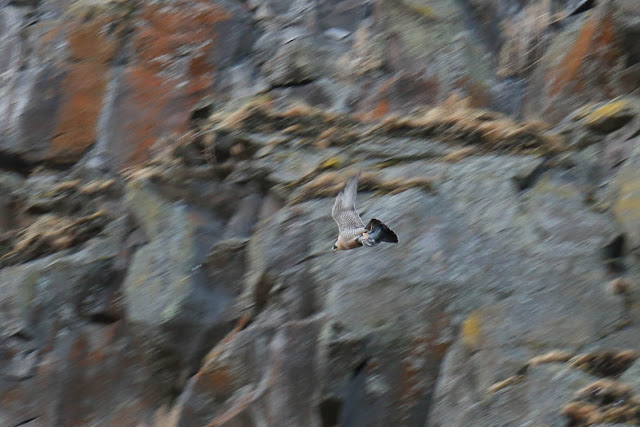 We had front row seats as a train emerged from the tunnel... 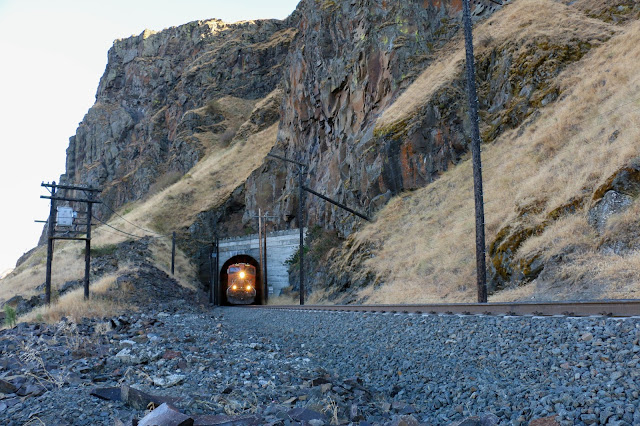 After the train had disappeared around the bend, one of the Peregrines returned with a bird in talons again.  Not sure if this was the same falcon carrying the same dead bird or what. 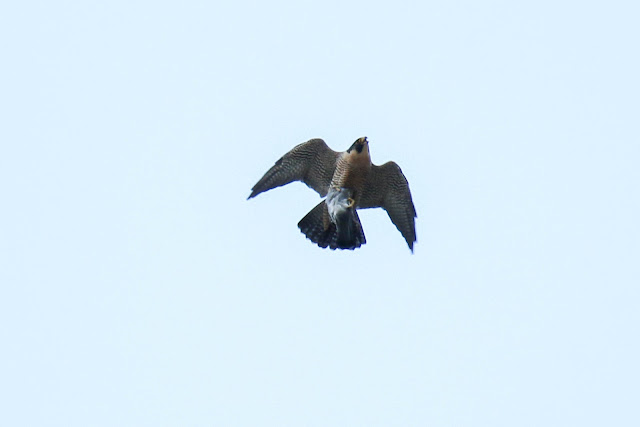