Halfway between Newport and Coos Bay is the quaint Oregon coast town of Florence, a place I had never been before this week.  My friend had learned of a bog near Florence filled with carnivorous plants and so the plan was hatched to visit this area.  When we were packing up the car on Monday morning I broke the news that we would be taking the long way thanks to a Cattle Egret in Tillamook.

Our first roadside distraction was Killin Wetlands in Washington County. 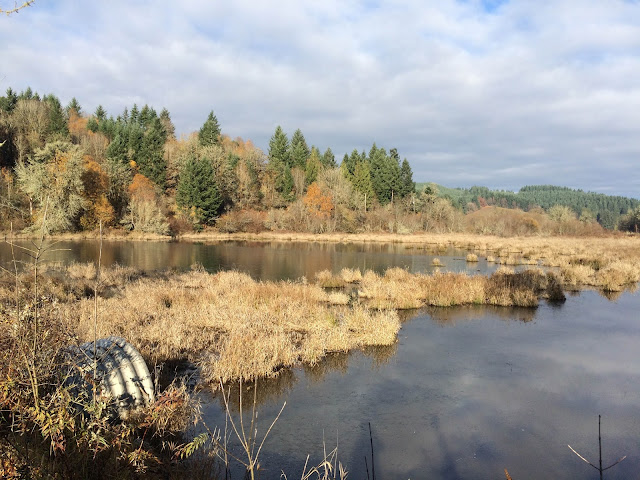 A couple of river otters were breaking through the ice, making a racket. 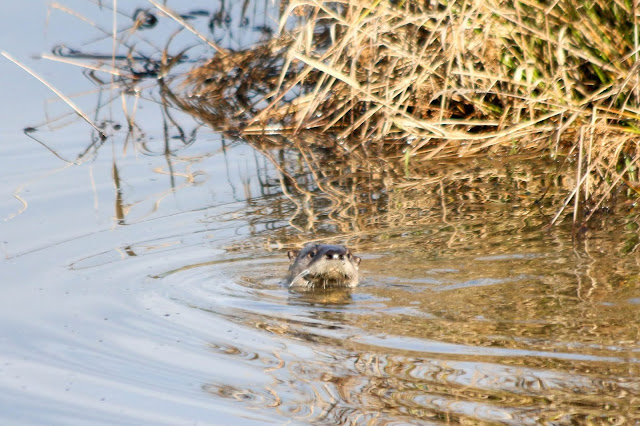 A dead porcupine was showing off its pearly whites... 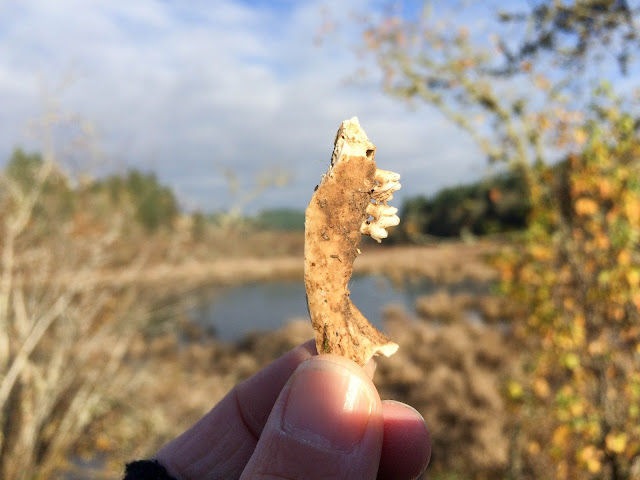 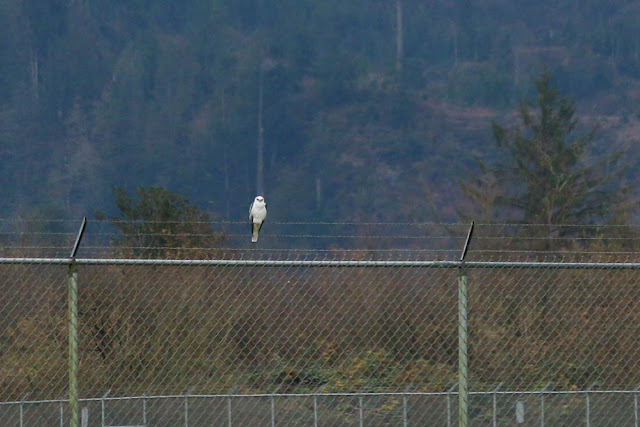 We returned to the original field.  Egrets were moving around constantly and finally we saw a smaller one in flight.  It landed and we were able to see it was indeed the Cattle Egret.  State bird! 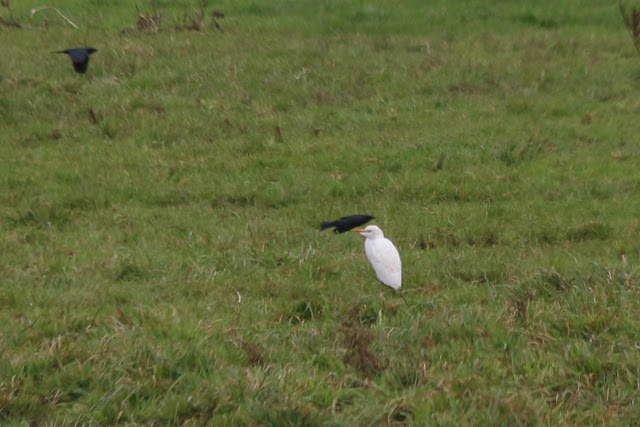 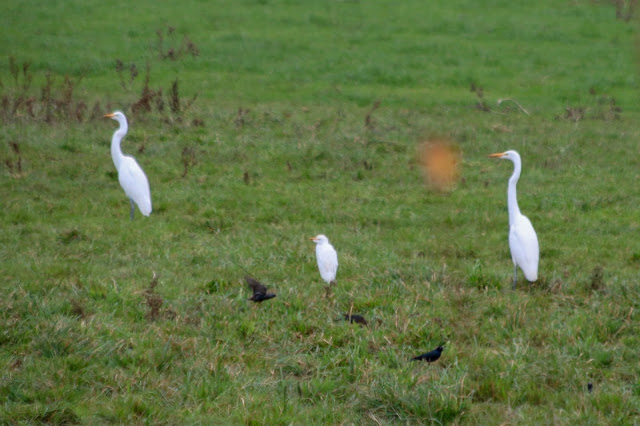 Relieved to have found the bird we carried on south on 101, where roadkill became the major distraction.  First a Barred Owl... 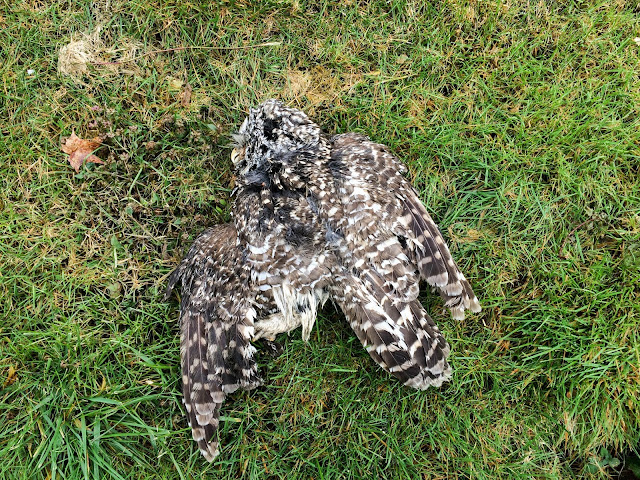 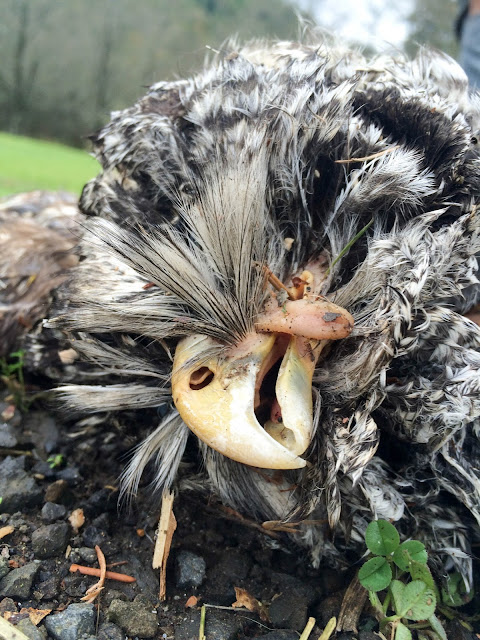 Can anyone tell me what is going on with that pinkish tongue-looking thing coming out of the side of its bill?

Up next, a Western Screech-Owl... 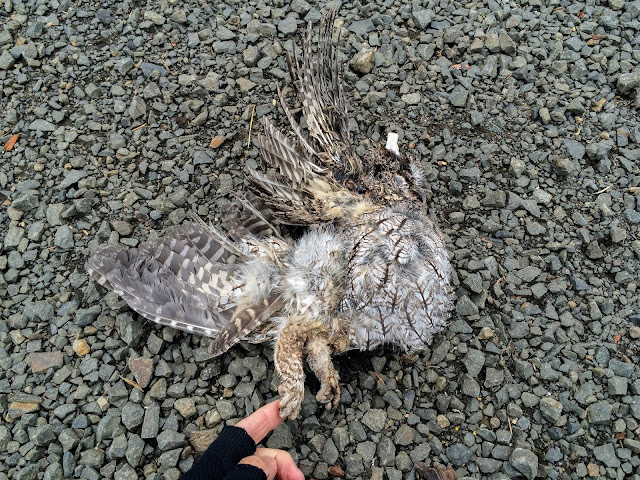 From the screech-owl we drove straight down to Florence in an attempt to arrive before dark and the impending rain.  Success.  It poured all night but by morning the rain had thankfully mellowed to scattered showers and we were able to enjoy coffee on the deck with Wrentits and Fox Sparrows. 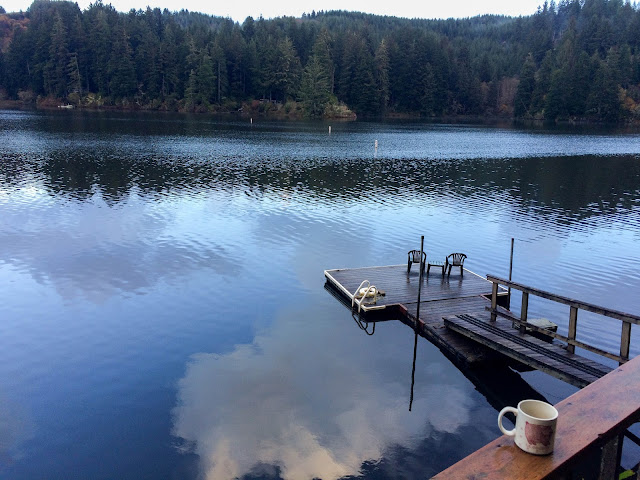 After breakfast we set out to Darlingtonia, the wayside where the carnivorous plant Darlingtonia californica, also called the cobra lily, grows in a bog protected by boardwalk trails.  It's native to the southwestern part of the state though I'm confused as to whether this spot is part of that range. 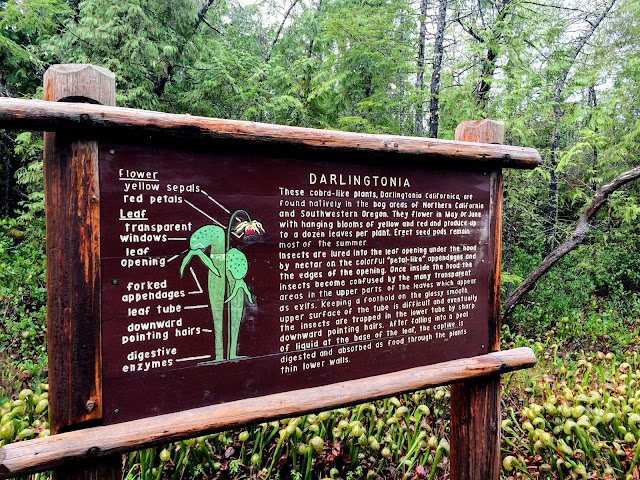 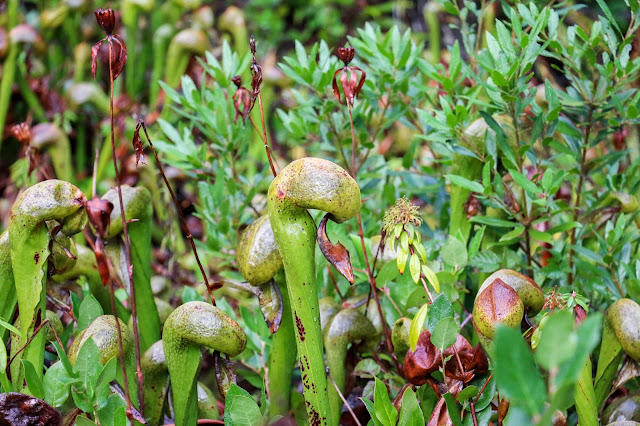 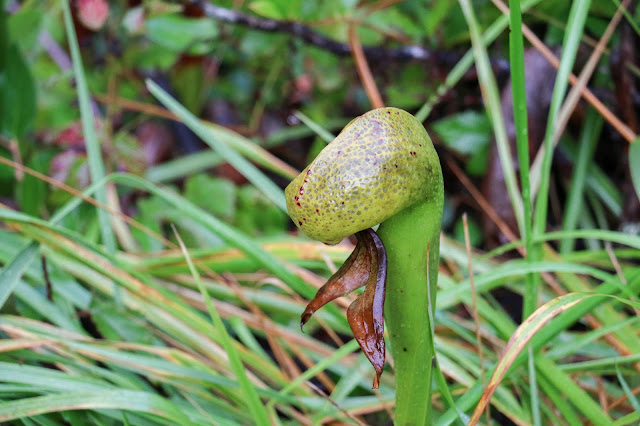 From this point on there was no plan really.  We drove towards town and followed signs to Heceta Beach where we found a lone Snow Goose poking around the grass.  Random. 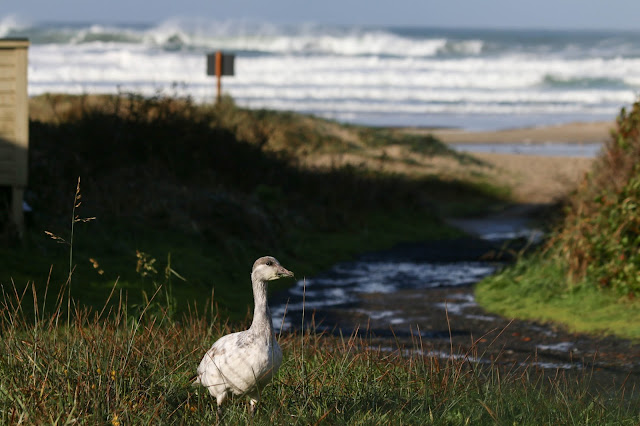 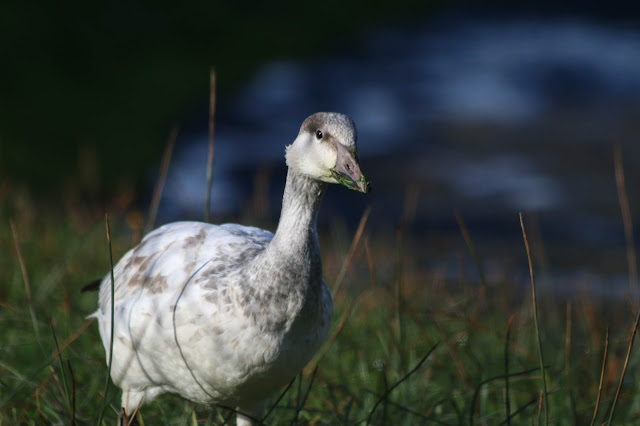 We opted not to explore this spot further when some crazy dogs arrived and instead drove down to the North Jetty of the Siuslaw River.  The long entrance road to the jetty turned out to be a nice place to walk the dogs and see some birds. 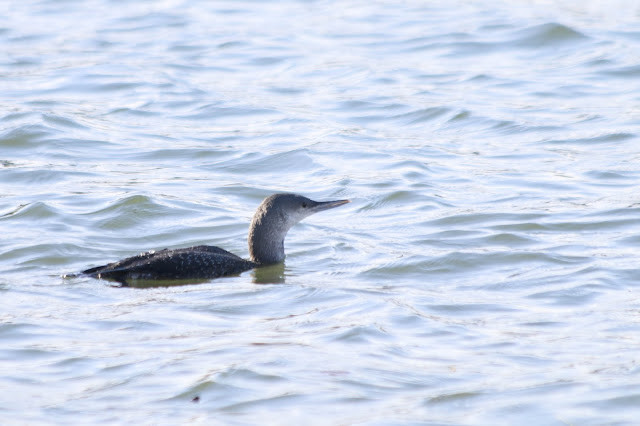 The vegetation along the river was thick with Fox Sparrows. 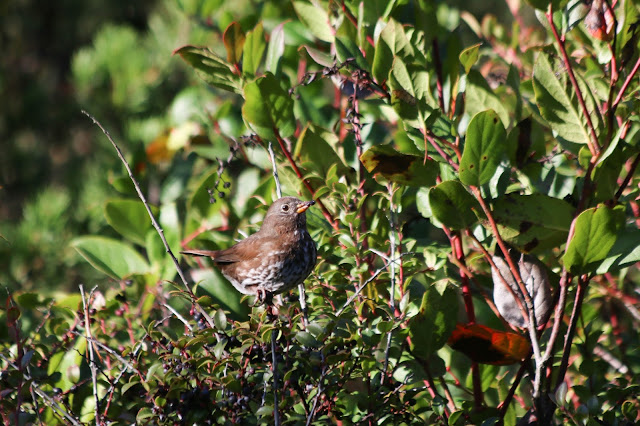 The road ends at the parking area for the jetty and some pretty dunes and stuff.

From the jetty there was a great view of a couple of corgis in the wild. 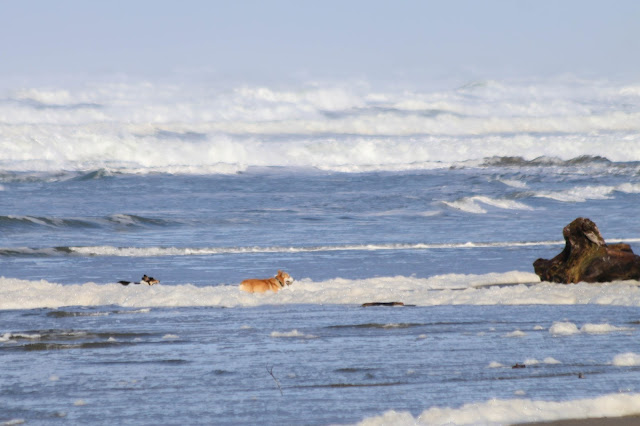 Black Turnstones were the only rockpipers I could find on the jetty. 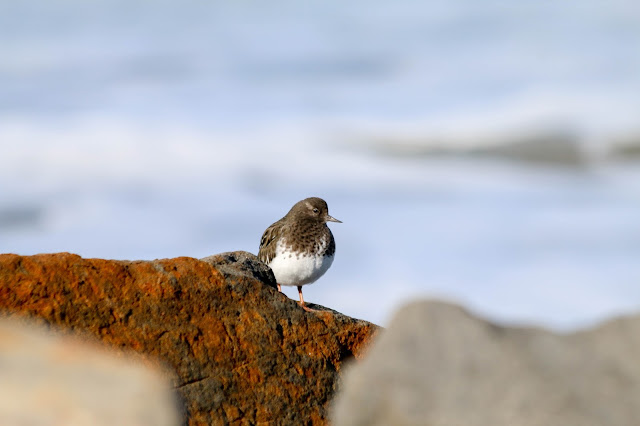 Nature's Cafe and Market on 101 in Florence was a great spot to pick up lunch (vegan cheeseburgers and jo-jo's one day, a chipotle tofu burrito and a hummus wrap another day).  We brought lunch back to the house where the mutts proved to be tuckered out, which meant we could leave them behind for the afternoon's explorations.

First up was the Hobbit Trail to Hobbit Beach just north of Florence.  The trail looked like every other coast trail I've ever hiked which is indeed kind of Hobbity.  At the beach we found some cool tide pools which made the trail worthwhile. 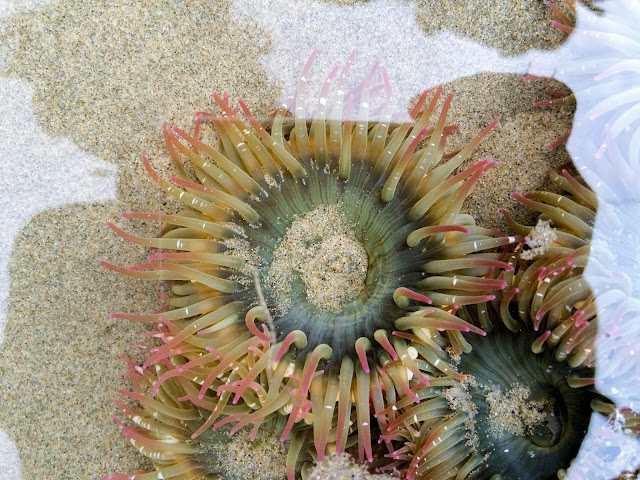 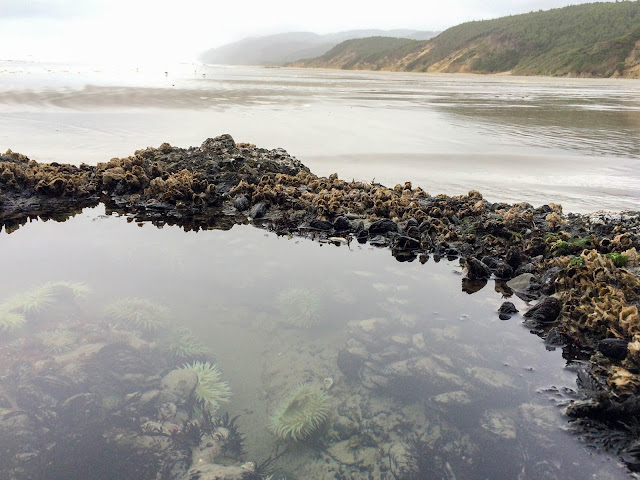 After this we headed up to the Heceta Head Lighthouse where we caught the sweet sunset with a bunch of witches. 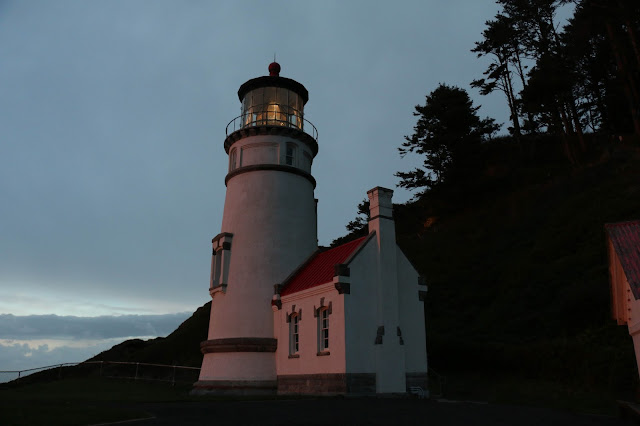 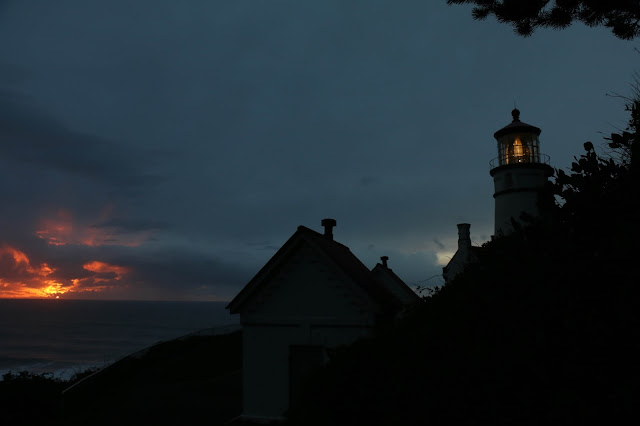 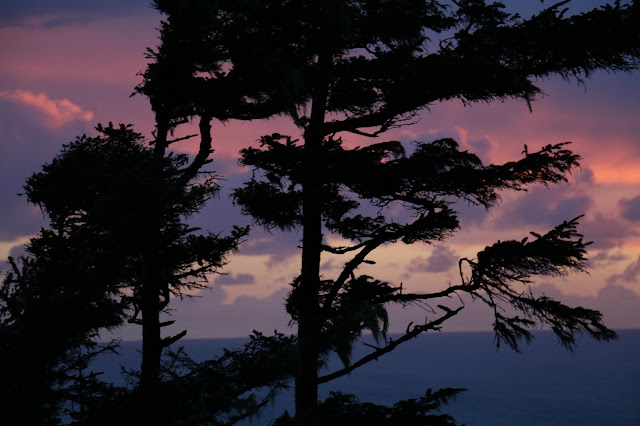