Yesterday was good, the kind of simple but awesome birding day I had not had in awhile.  It started with sunshine and a Steller's Jay hopping under the feeder, the first time one has landed in the yard. 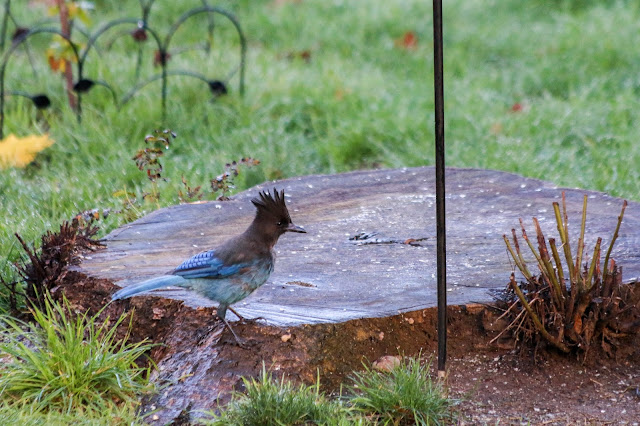 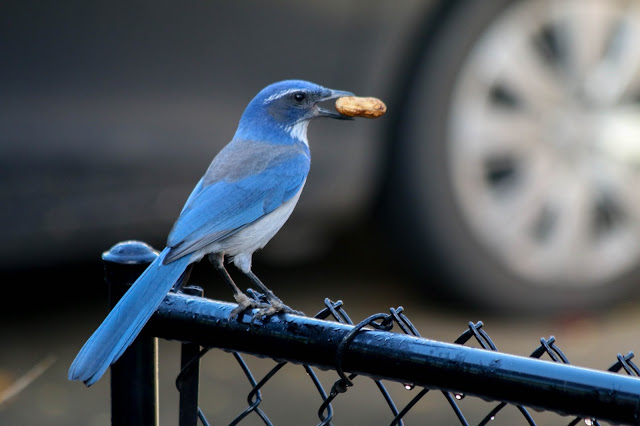 After breakfast I was trying to decide where to go birding.  There was an interesting eBird checklist from earlier in the morning from Chinook Landing and since it's fairly close I figured what the heck. 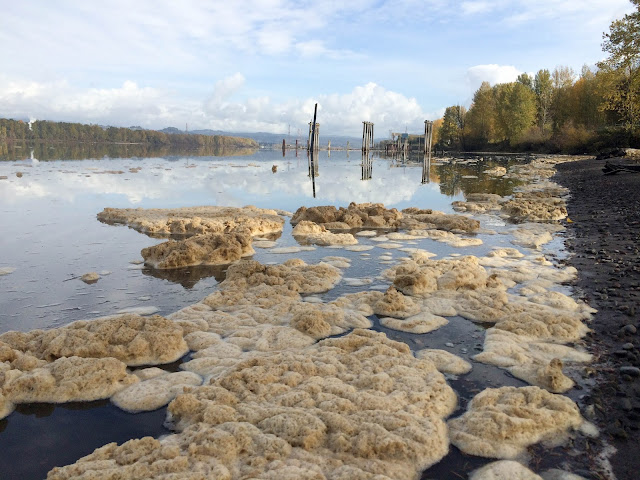 Things were foamy and did not seem too exciting at first, but eventually birds began to materialize. 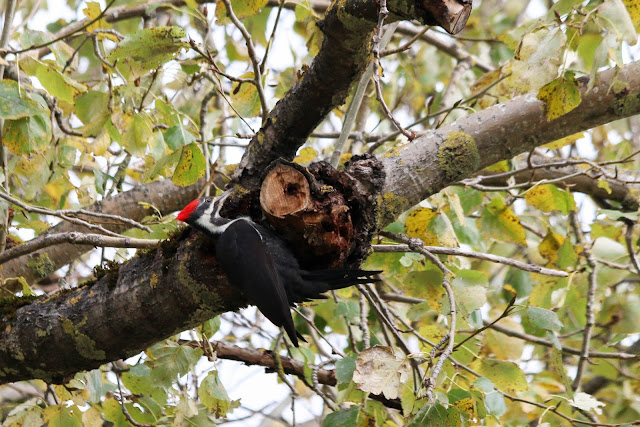 A big flock of Golden-crowneds and juncos turned up a single White-throated Sparrow, first of the season for me.  Elsewhere a Fox Sparrow called.  In the trees along the entrance road a pile of flickers competed for a good place under the lighting. 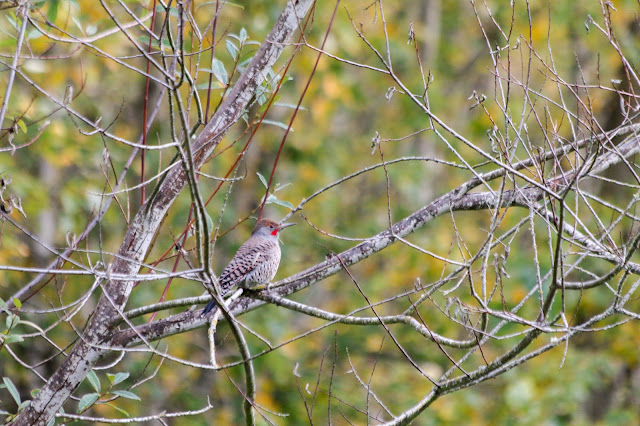 Some of the trees reminded me of Fruity Pebbles. 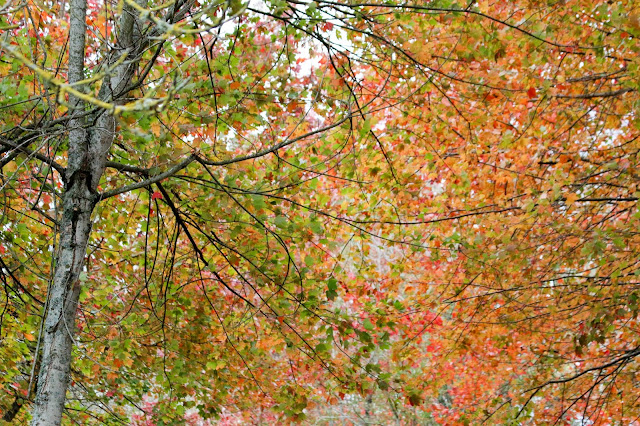 Kinglets made their best showing here.  While I was crouched and trying to sneak up on a Varied Thrush, a Golden-crowned came ridiculously close to landing on my shoulder. 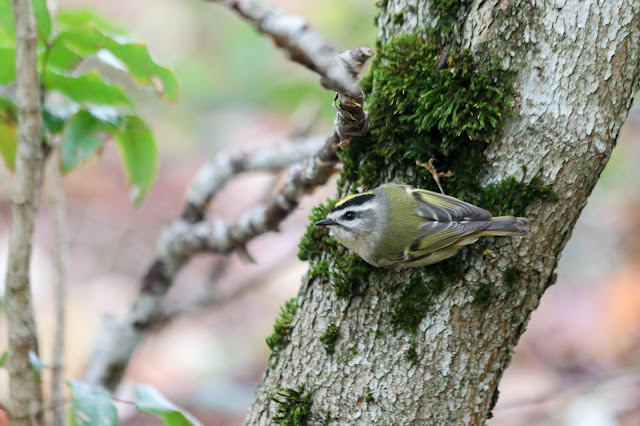 The thrushes were on to me and never let me get close.  Instead... 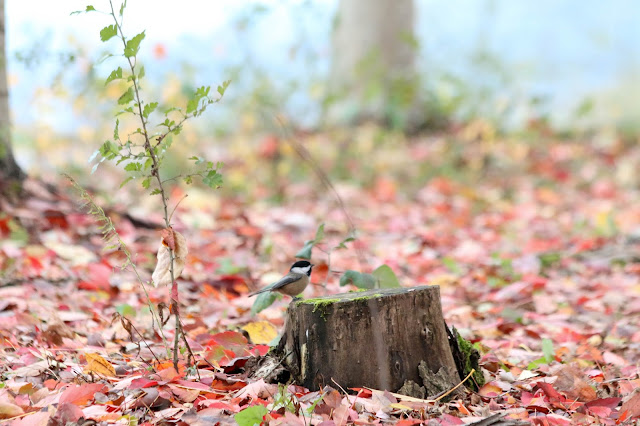 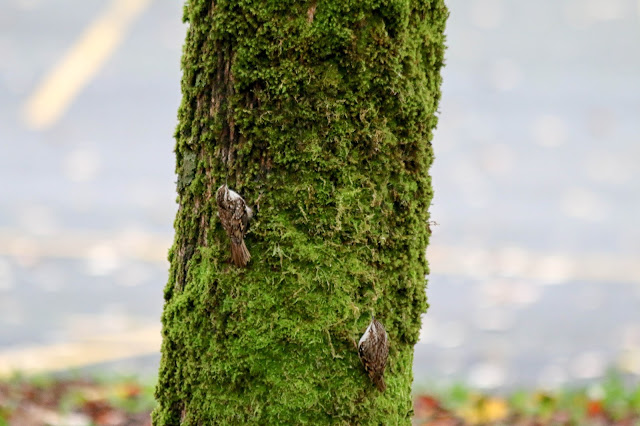 One creeper was investigating a small building in the parking lot, intent on plucking snacks from the eaves.  While doing so it did not care how close I was.  I was tempted to pet it. 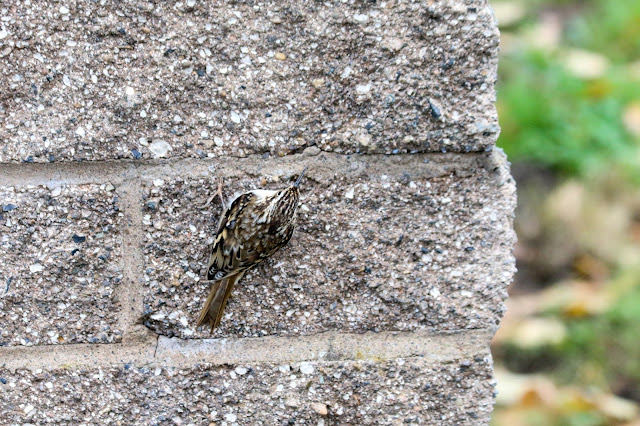 I was feeling pretty good after this visit.  Seeing a lot of birds close up, even if common, still makes me really happy.  I ended up with 35 species here, not terrible considering the kind of weird park that it is. 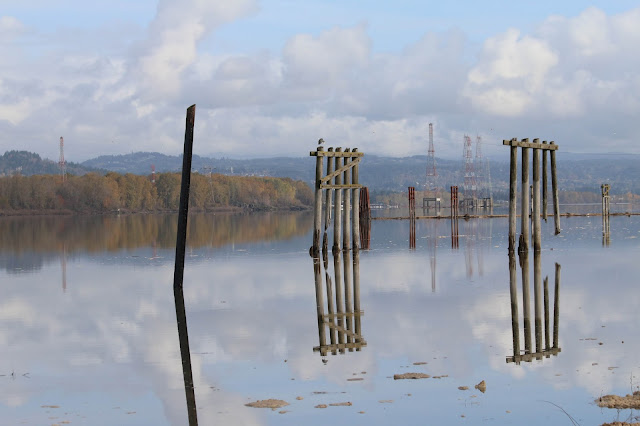 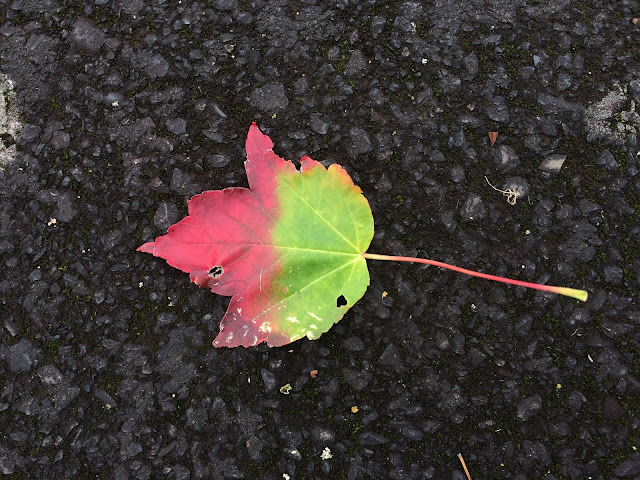 It was fairly early when I was leaving and decided to check out Broughton Beach for the first time in a couple weeks.  Expectations were low, especially after having such a good time at Chinook Landing.  But Broughton Beach turned out to be like freakin Christmas.

First off, I noticed a small backhoe thing and feared they were paving over the Horned Lark habitat.  Then I realized the backhoe thing was gripping a big bundle of crap wrapped in a blue tarp.  OMG.  They were scooping up the camps. 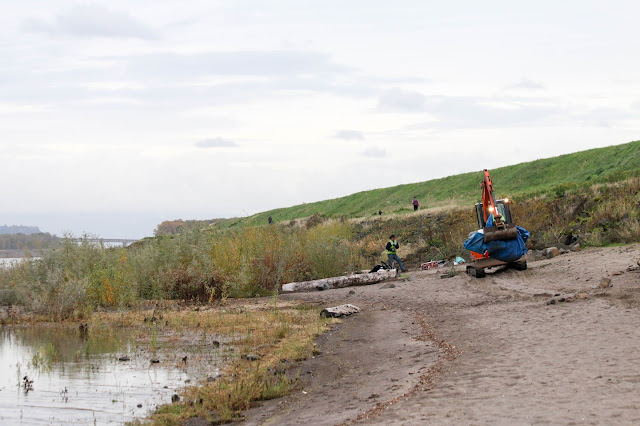 I am not unsympathetic to the housing crisis in Portland but I AM unsympathetic to folks trying to steal bikes, yelling drunken on the beach at 6 a.m., and the destruction of wildlife habitat.  I talked to one of the guys in the clean-up crew for a bit.  I checked out his bucket of sharps. 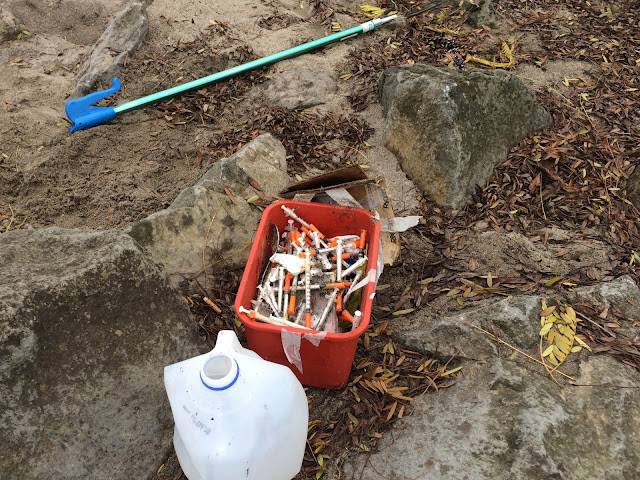 Another reason not to miss these camps.

For those of you unfamiliar with the camps at Broughton Beach, let me give a brief backstory.  This has been a new phenomenon starting in the summer of 2014 when a couple folks set up camp with their motorboat tied up here.  This summer they multiplied and there were at least a dozen different camps, several with boats and/or jet skis.  The area is regulated by the Port of Portland and rumor says anything below the high water line is a sort of law-less area.  Of course, these camps are above the high water line, but perhaps close enough to avoid The Man.  It's bizarre.  I never had any trouble with them but other folks did.

I was pretty stoked to see all this work being done to restore Broughton Beach and carried on with my walk to the gull roost.  I lifted my bins and the first thing I saw made me say WTF.  Among the Mews and the Californias, a lone Heermann's Gull. 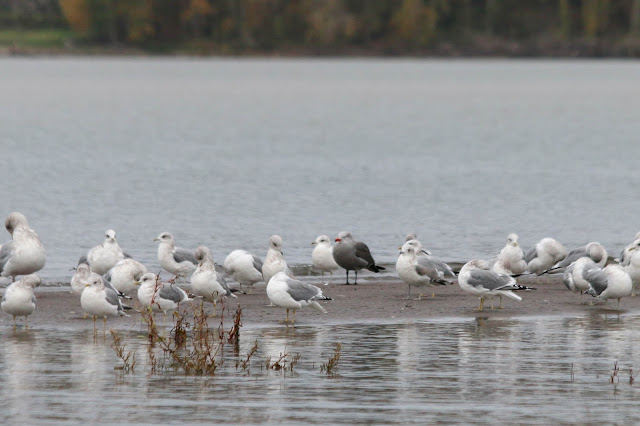 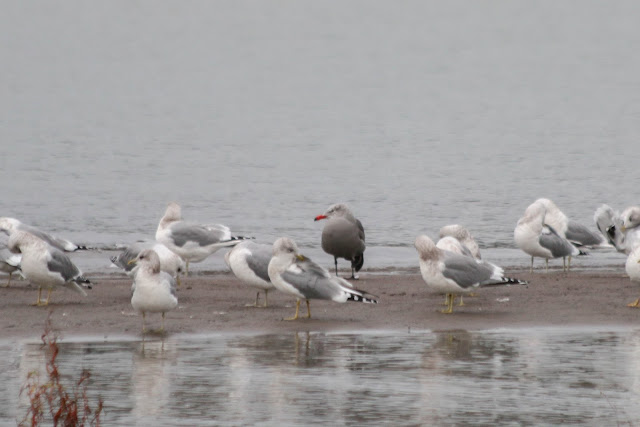 This was a county bird.  Enough said.

I reported the bird and continued to walk east to look for winter ducks.  I finally saw a Common Goldeneye in the water and took a few steps to get closer.  That's when two Short-eared Owls flushed from right below me. 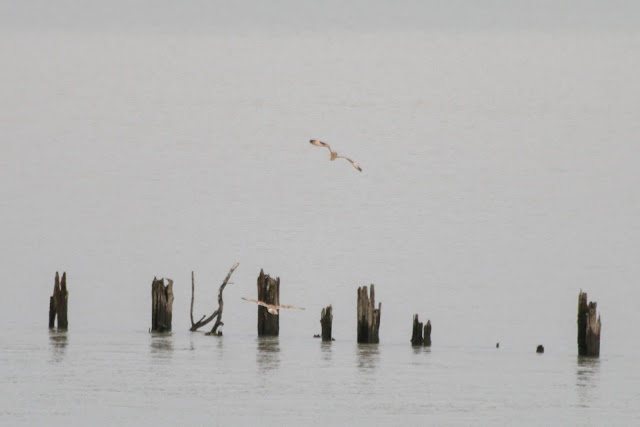 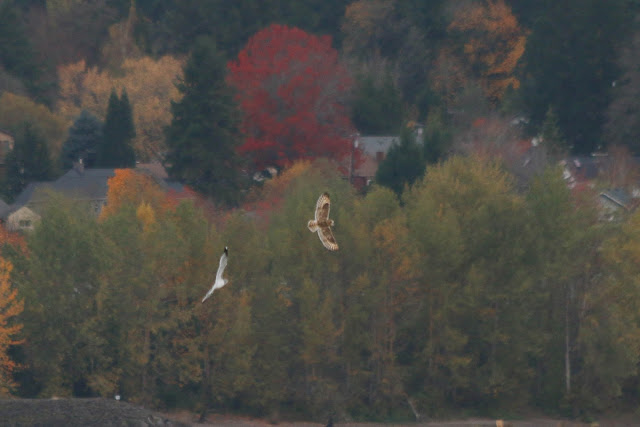 After determining there were no more ducks of interest along the trail I turned around to head back to the parking lot.  They were still working on the camps. 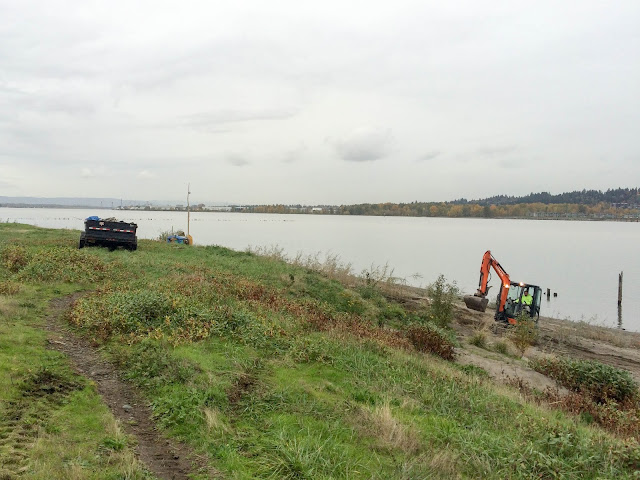 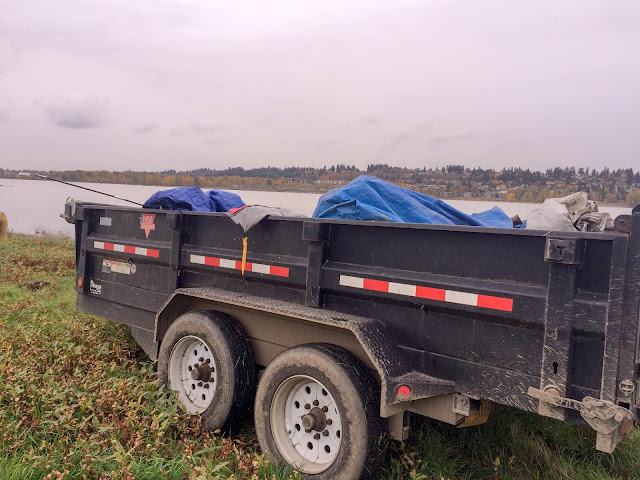 Only one camp left.  This fellow has permission from the Port to stay through Friday to get all of his stuff together. 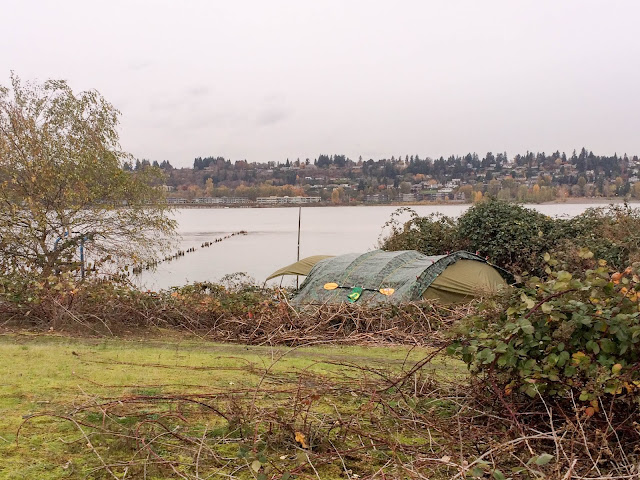