The morning of January 5th found us birding the area known as La Bajada, southeast of San Blas, where I lifered hard yet again.  It was not a good day for photos of birds, but I will share what is worth sharing. 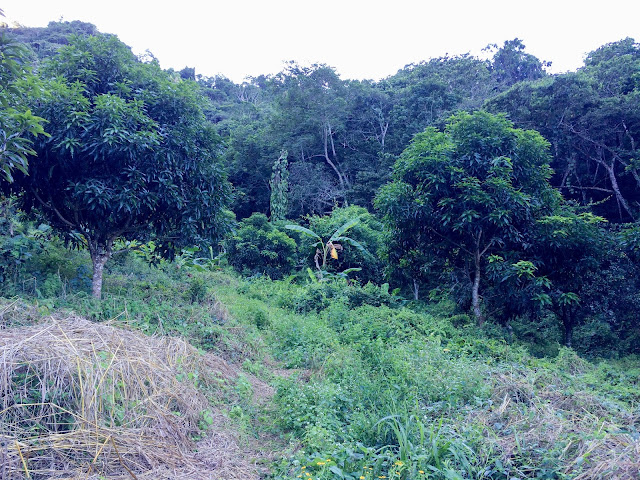 This is where we first encountered Rusty-crowned Ground-Sparrows.  The badass-ness of this bird will hopefully make up for this terrible photo: 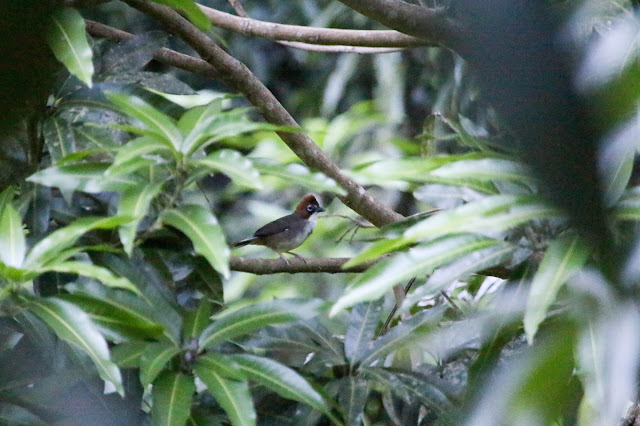 Butterflies and things were a bit more accessible for photos... 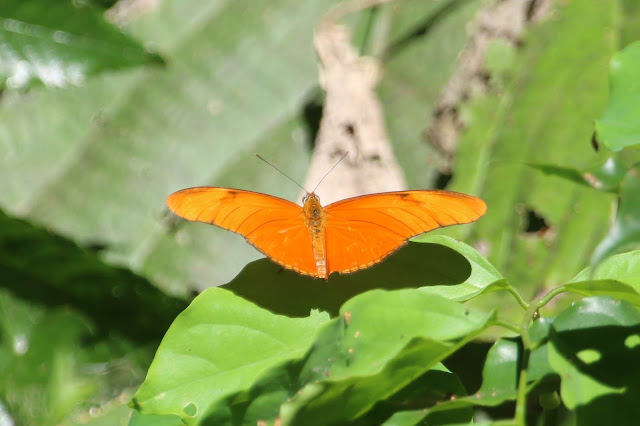 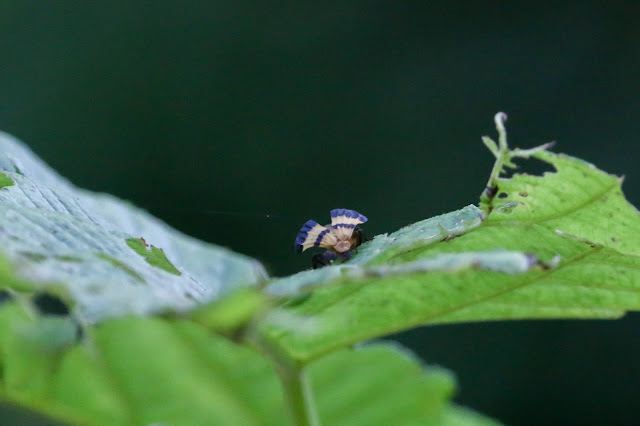 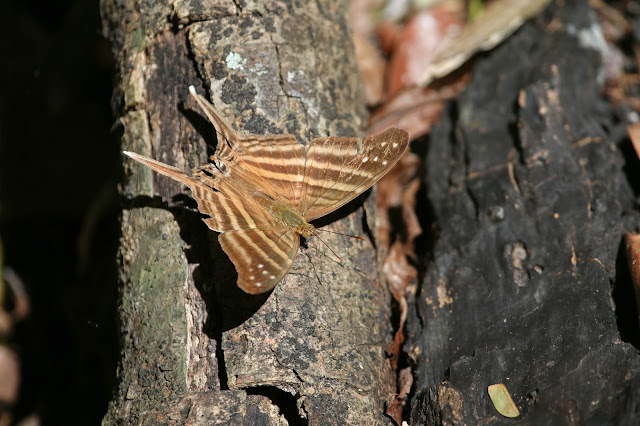 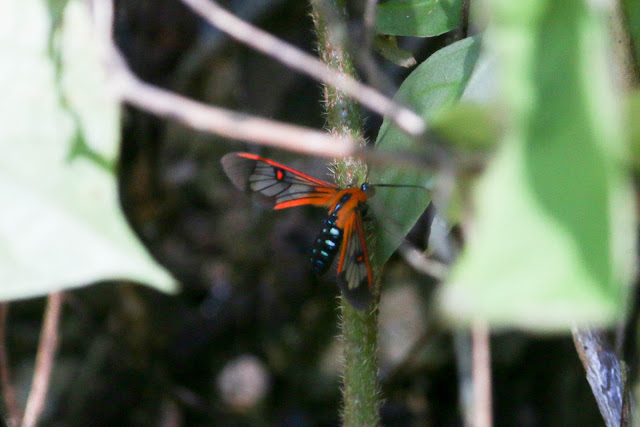 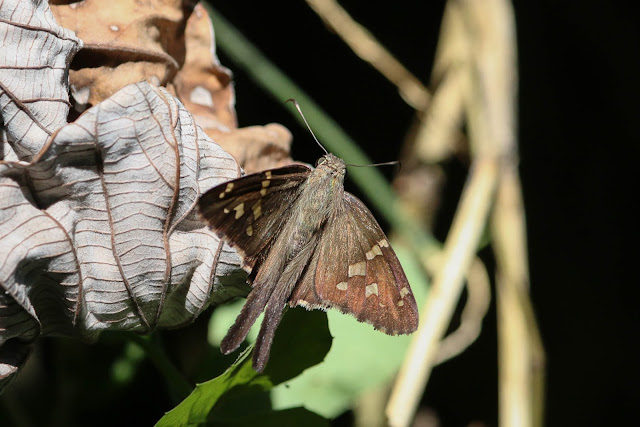 We came upon a fruiting tree here.  A miracle tree. 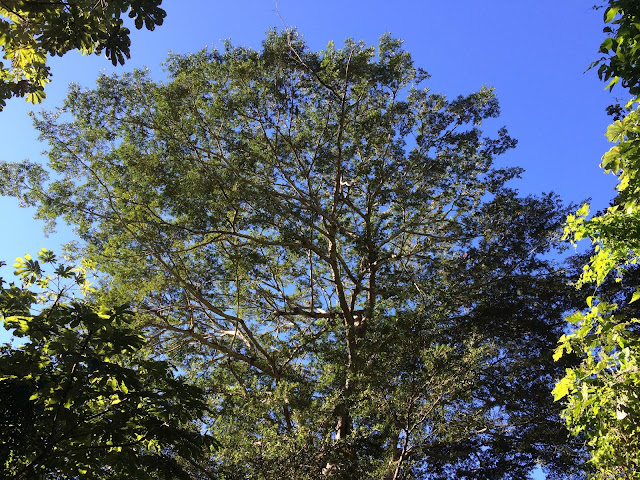 I think we noticed the White-throated Thrushes and Tufted Flycatchers first but there was so much more.  We strained our necks trying to pick out all the warblers and flycatchers and orioles and trogons.  We lied down, propping our heads on our bags, and stared into that tree for a long time.   Trying to get an accurate count of Citreoline Trogons proved challenging, which says something.

Somehow the only bird photo I have from this tree is this Boat-billed Flycatcher: 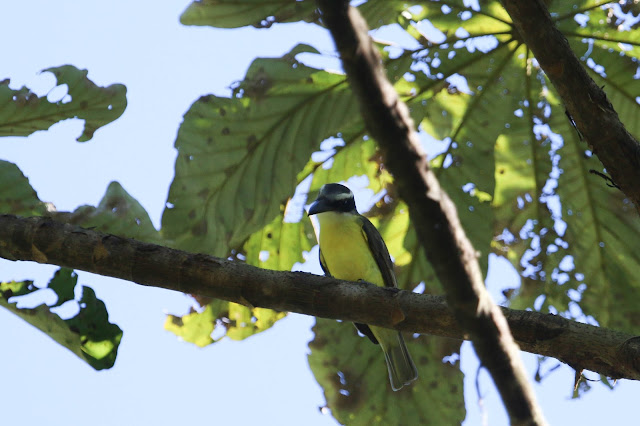 On the 6th we went out to Cerro San Juan for the day, birding higher elevations than we had previously.  The birds did not disappoint. 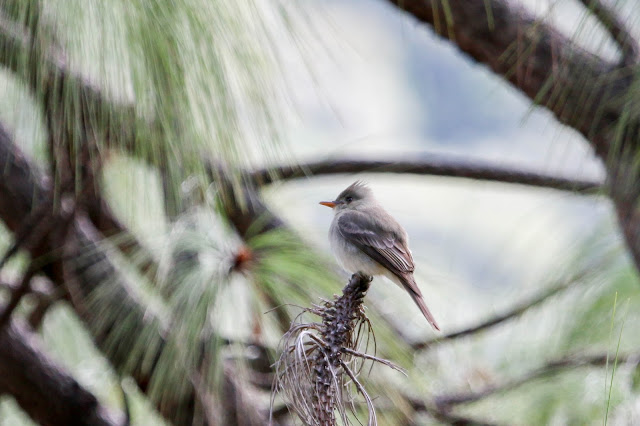 Look at this field: 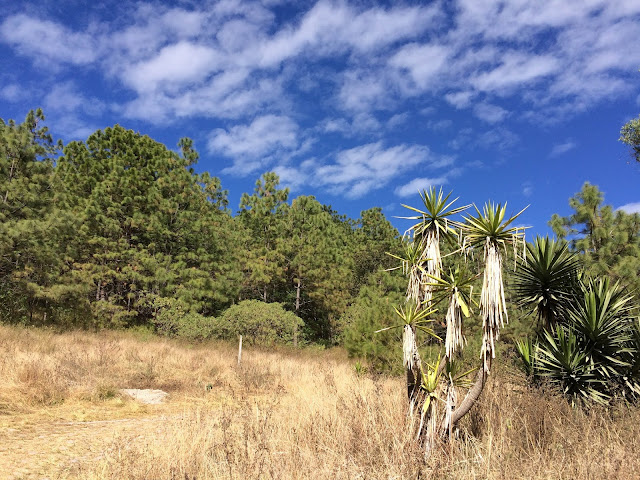 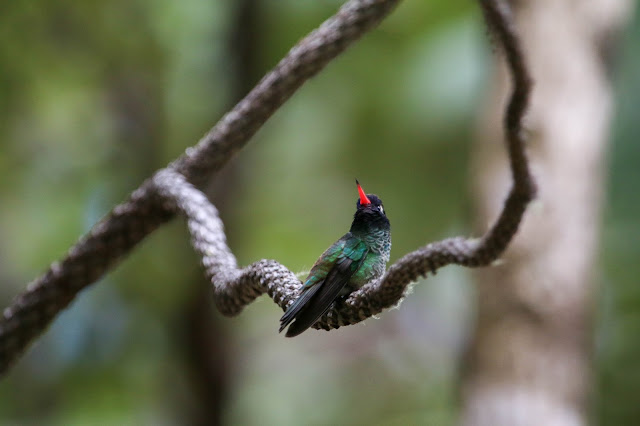 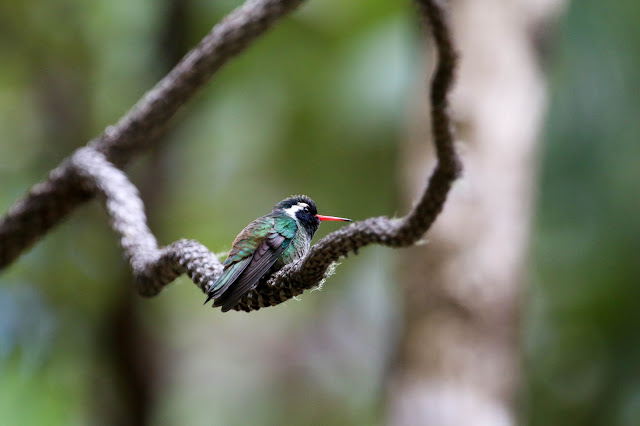 We were walking back to the car to drive the next stretch when someone noticed a couple Gray Silky-flycatchers perched up in a shrub along the road.  There is absolutely nothing to dislike about these birds. 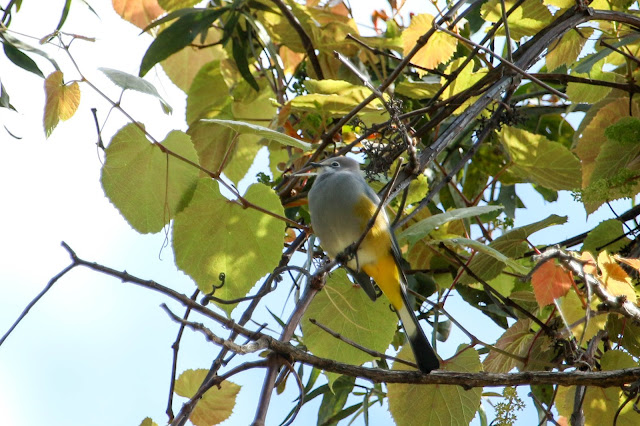 Gray and yellow have never looked so good together.

At our next stop we walked up a dirt road and began encountering birds.  A flock.  A flock that was not moving, but rather hanging out on the barbed wire fences and low tree branches.  We did not question it.  There were warblers and tanagers and a trogon and woodcreepers and flycatchers, all ours for the taking. 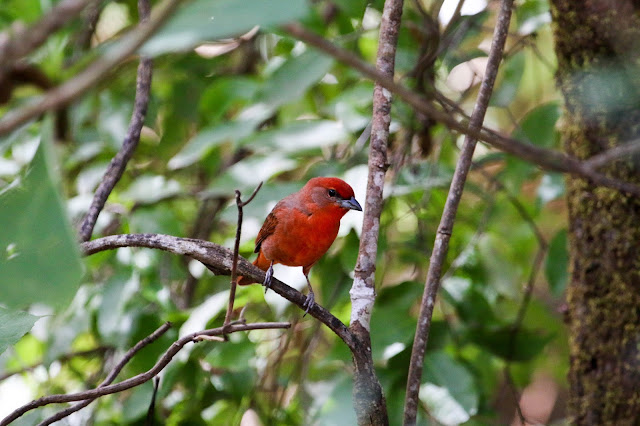 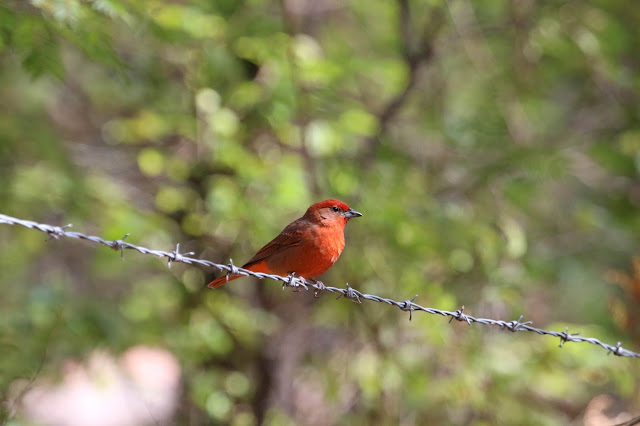 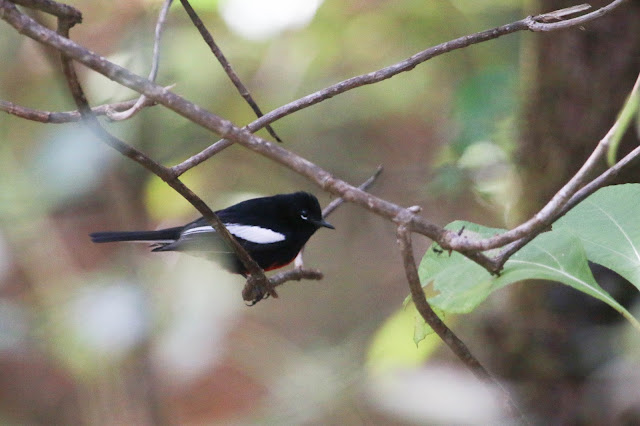 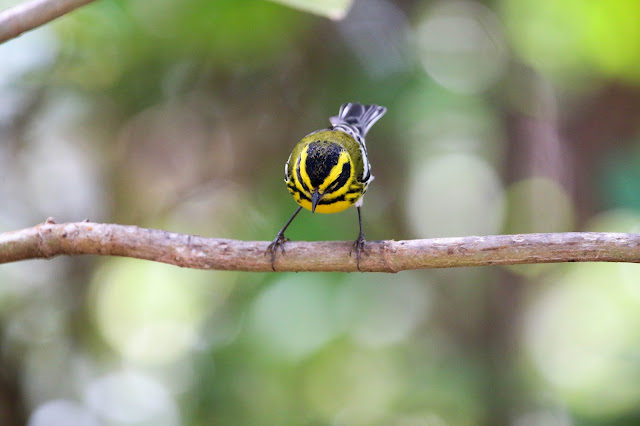 As recounted in Seagull's latest post, "Finally, the five gringo idiots realized why the flock wasn't going anywhere...it was sitting on top of an army ant swarm!"  It was impressive, the steady streams of ants sticking to a handful of paths as they crossed the road, keeping the birds attentive and low to the ground. 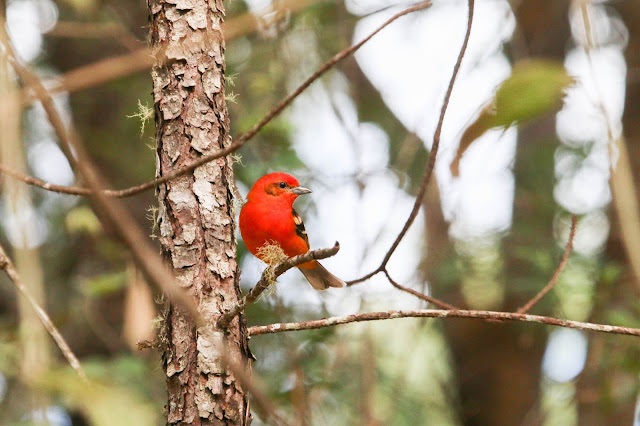 This is when my face melted off.  Thanks, Flame-colored Tanager.

As the ant swarm diminished we headed back down to the car and continued on down the road.  The sight of some birds in coffee bushes next to the road brought the car to a halt. 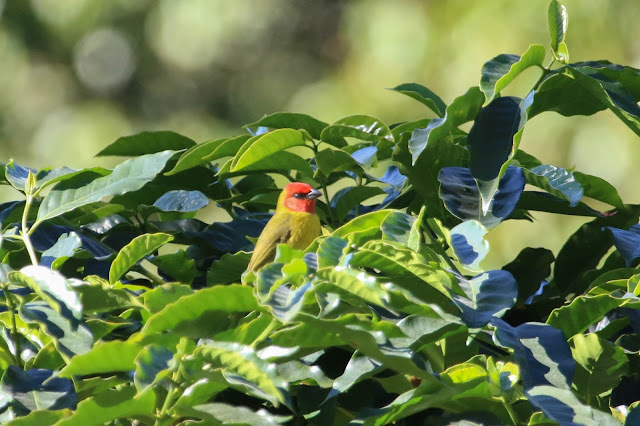 Red-headed Tanager!  Nearby we had great looks at my first Elegant Euphonias, mind-blowing birds of which I obtained zero photos.  Let me show you some garbage instead. 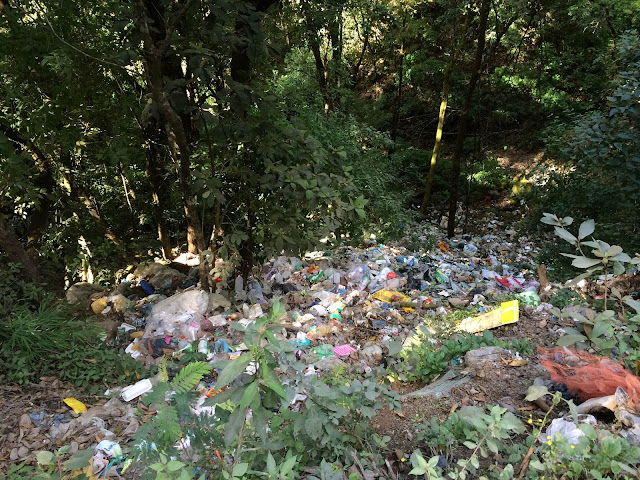 I can't explain to you why driving a bunch of trash way up a shitty road and dumping it over a steep drop is easier than having it picked up or brought to an actual dump, but I am sure there is a reason.  Perhaps it is cheaper.  Perhaps it is habit.  I do not know. 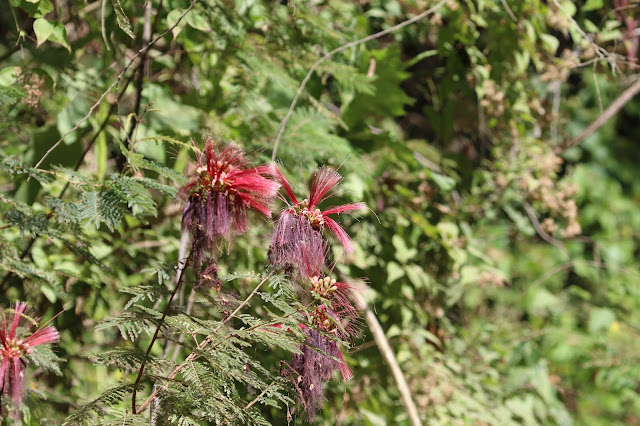