on February 05, 2016
It was hard to return to the rainy northwest after weeks of sunshine and hundreds of amazing birds, but I did, and there were more birds to look at here.  Year birds.  Good birds.  Birds to keep my ranks in the eBird Top 100 for the WORLD from slipping out of sight.  My first couple weeks back I birded on my own, strangely missing birding with other people.


This Hairy Woodpecker should have excited me as it usually takes me awhile to find one in the county each year.  But this was not a year bird.  Downy Woodpecker would have been a year bird at that moment.  Birding is hard.

One day I was out running errands and I was thinking about the weird sounds my car was making when I turned right.  So I kept turning right, investigating the sound, when suddenly a gull field appeared.  A gull field, not far from my house, that I had not known existed.  I sat in my car and picked up year bird after year bird.


I tried to find combos that would rival those of Mexico, but that is not possible.  My best yard combo:


Finally this last week I had plans to bird with other people!  I know, this is not like me.  But it was so much fun.  My incredibly lucky friend Frank came to town and on Tuesday morning we picked up local birder and tiny-house-dweller, Audrey for a morning of birding in SE Portland. 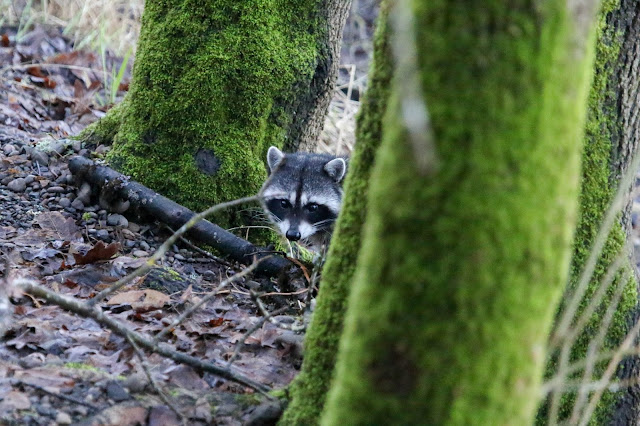 Oaks Bottom has apparently become the easiest place to view raccoons in Portland.  Most were sleeping out in the open on tree branches, though this one fella was wandering around on the ground. 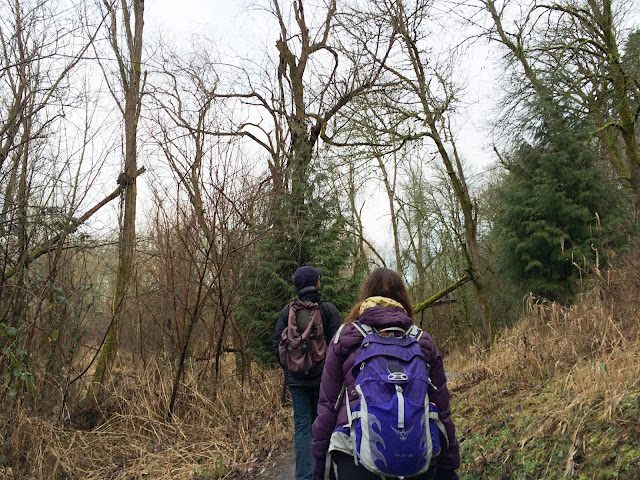 Though we accumulated a decent bird list here not one of those birds was a year bird.  Next we went over to Reed Canyon to look for owls and things, lucking out with excellent views of a Red-breasted Sapsucker pooping.  It was a fantastic poop display.  Top notch.  It was also a year bird. 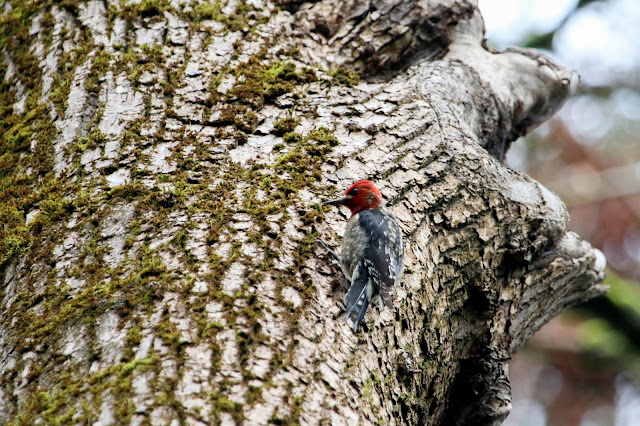 We watched this Red-breasted Nuthatch hopping around with a sunflower seed, trying to decide where to cache it. 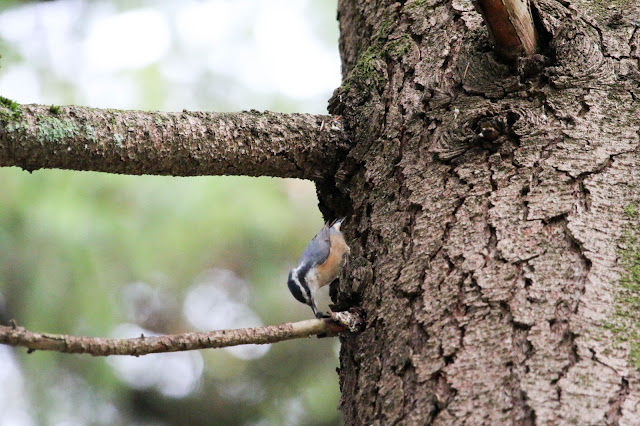 Frank shared with us his love of Golden-crowned Kinglet feet. 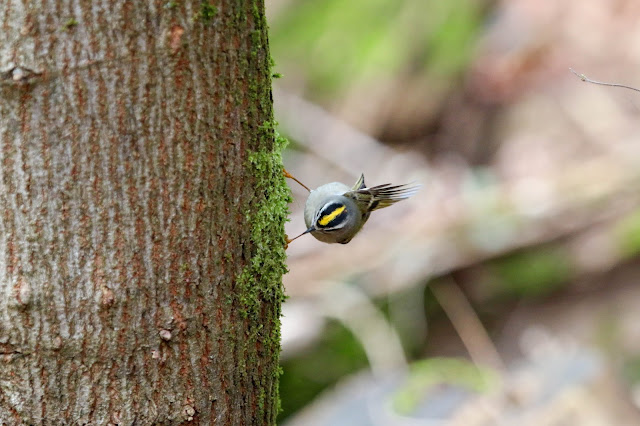 Look at that foot. 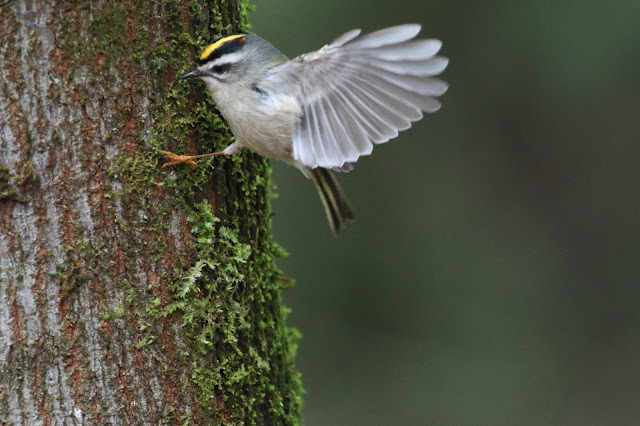 Yes.  All this birding was fun but it was not delicious.  Donuts are delicious and we ate a lot of them after birding.  I had to get home to let the dogs out after getting major tiny-house-envy at Audrey's, so Frank and I headed back to Parkrose.  After this brief birding break we headed out to Fairview for yet another year bird, a handsome male Redhead that has been hanging out at Salish Ponds.


On Wednesday morning Frank and I decided to really go for some year birds by heading to Newport.  The sky did mysterious things on the drive and there is still debate over whether this is a rainbow or something else. 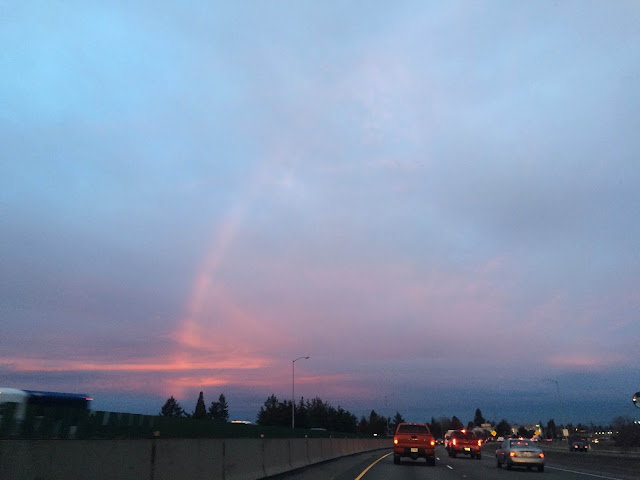 We arrived at South Beach State Park and walked down the beach looking for plovers, finding only a dead sea lion. 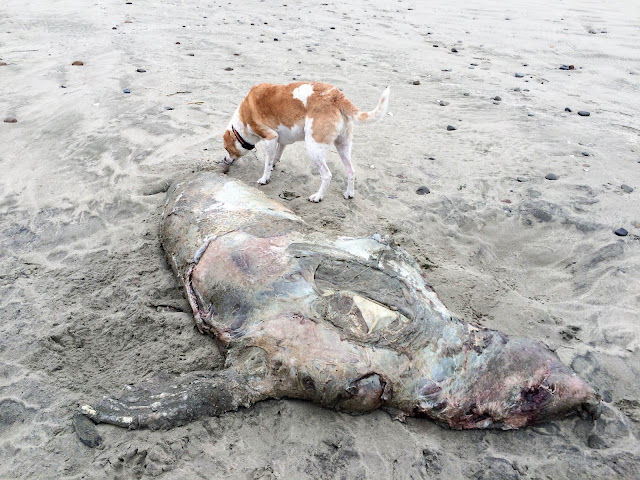 We walked back up the beach to try the other direction.  Despite Frank's excellent luck he had very little faith and did not believe we would find the bird.  But then there it was.


Frank was so pleased he offered to wait with the dogs while I attempted to crush it.


At the South Jetty there were more year birds:  Harlequin Ducks, Red-breasted Mergansers, White-winged and Surf Scoters, Pelagic Cormorants, etc.  I felt as content as these seals look: 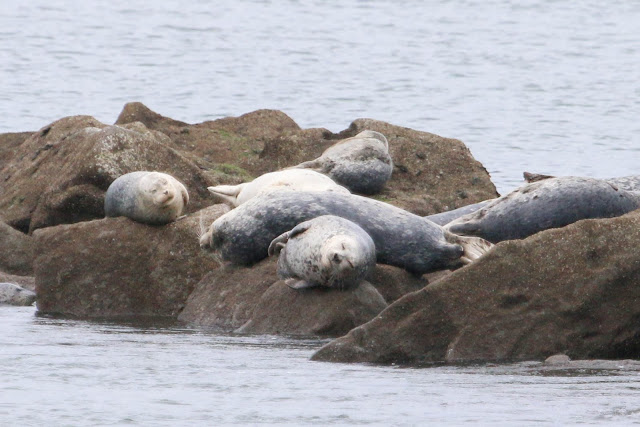 I was content not only with the birds but with the amazing morning weather which did not include rain nor did it include wind.  A Mexican miracle, here in Newport.   This did not last, but it lasted long enough.  The rain picked up in time to stop for lunch in Lincoln City where we left the dogs cozy and dry in the car.  It was 47° and pouring rain.  When we came out we found this note on my car: 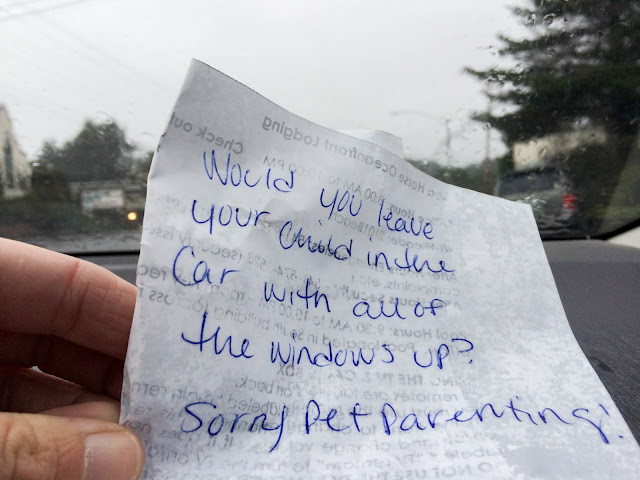 On the way back to Portland we looked briefly for the WA County Tufted Duck, then drove over to the Milne/Vadis Road area to look for owls.  A Great Horned was sitting where it supposedly always sits in a barn window, a Rough-legged Year Bird perched on blackberries, and lastly a Barn Owl flew out of a barn as I approached.  Birding is easy.

Yesterday to escape the rain Frank and I drove east to Wasco County where one of the first birds we found was a Lewis's Woodpecker. 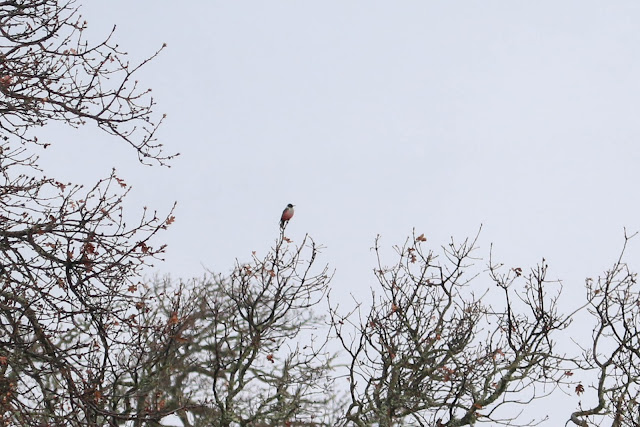 Nearby we came across something far more exciting, an abandoned homestead that was purchased by the forest service for the surprising (to me) reason of bats.  Yes, bats.  The main farmhouse is used as a maternity roost by a colony of Townsend's big-eared bats while the barn nearby is used by mouse-eared bats.  So cool.  I plan to return in the summer to see these critters. 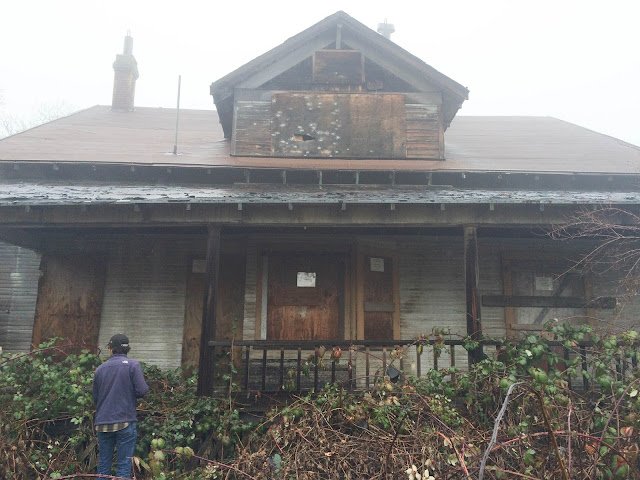 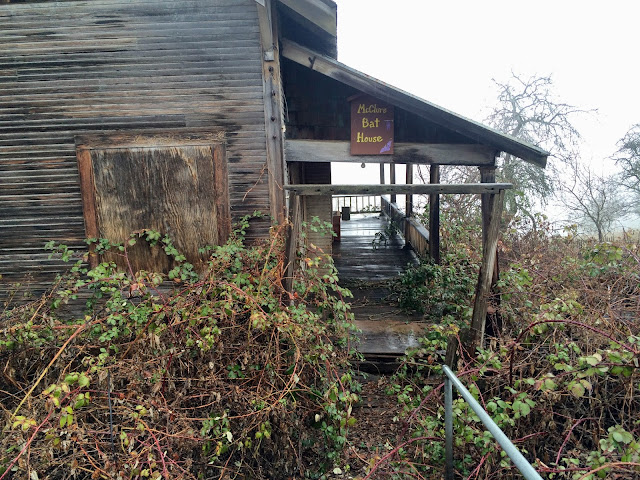 We headed south on 197 from The Dalles and found this sad Pronghorn in a field all alone.  She had no problem peeing but something was obviously wrong with her. 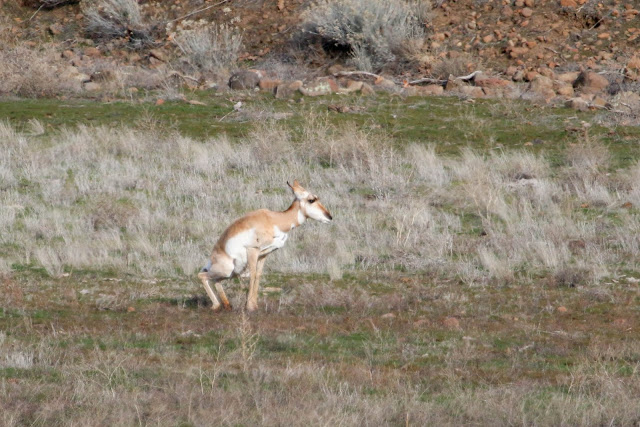 The first Townsend's Solitaire we came across on Juniper Flat Road was exciting, a year bird, but the next fifty were much less so. 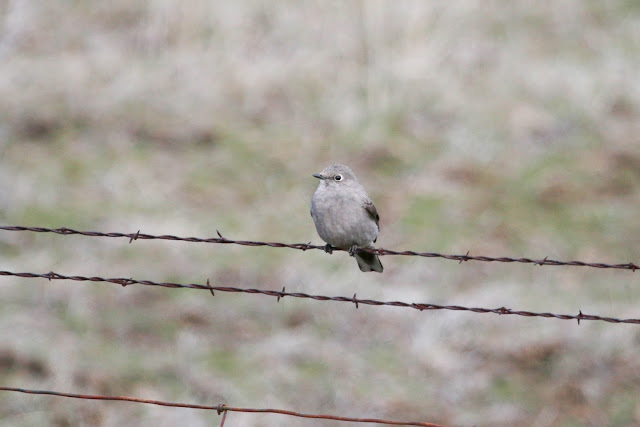 This kestrel was exciting despite it's status as not-a-year-bird. 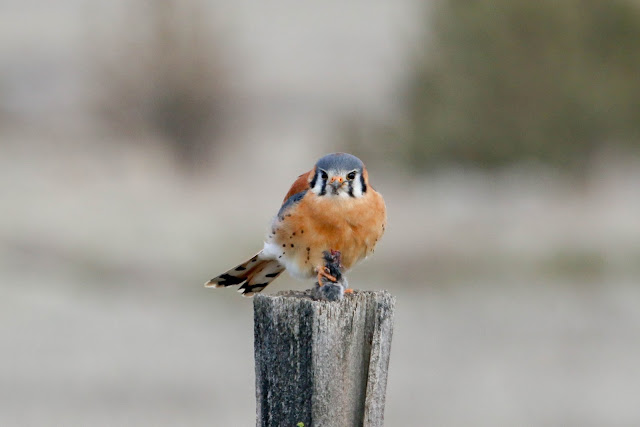 Our last stop was along Victor Road to get me some year Tricolored Blackbirds.  Success.  We drove back to Portland with many year birds tucked under our belts, which is not a comfortable way to drive let me tell you. 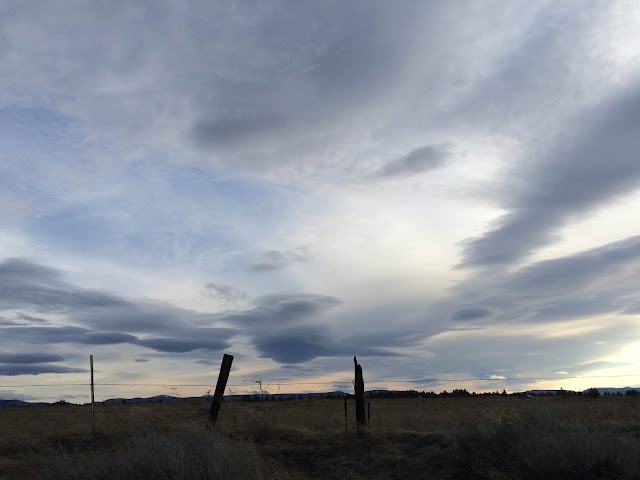 It has been an excellent week of birding and hanging out with people, which is apparently my theme for 2016.  Who would have guessed?  Good times!!!
Golden-crowned Kinglet Hairy Woodpecker Herring Gull Lewis's Woodpecker Mountain Plover Red-breasted Nuthatch Red-breasted Sapsucker Redhead Snowy Plover Thayer's Gull Townsend's Solitaire