Call of the Wagtail.

"Part of me wants it to disappear before I can look for it." - A famous birder on a rare bird being seen near them.

On Sunday while at work I got word that a White Wagtail had been found near Bend in central Oregon, though with my weekend not beginning until Tuesday I had zero hope of seeing the bird.  These Siberian wonders tend not to stick around for long but stick around it did.  It was seen all day on Monday.  This meant that I should try for it Tuesday, though I was not feeling it.  I went to bed Monday with the decision made that I would stick to local birding.

But then something happened Tuesday morning to cause me to wake with a start at 3:30 a.m.   It could only be described as the Call of the Wagtail (with a hint of the call of nature).  I wanted to go chase that bird.  I got up and packed my bags, made some coffee, remembered the dog food and the phone charger and took off down the highway at a ridiculous hour. 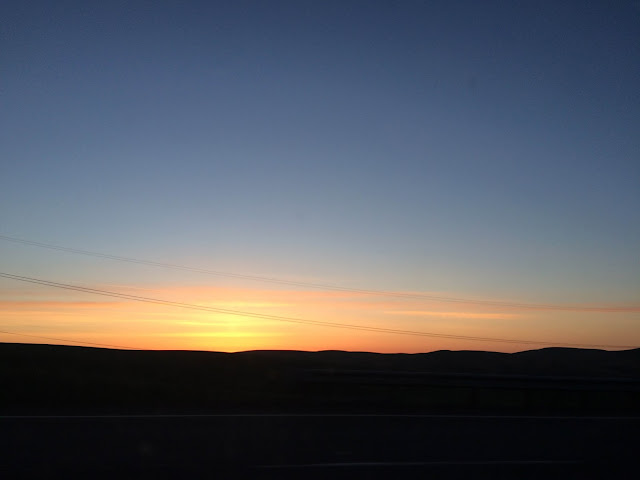 I stopped once along 97 so the three of us could pee in some sagebrush listening to a morning chorus of coyote howls, and once for gas in Madras, arriving at Hatfield Lake at about 8:20 a.m.  Unsure if I was even in the right spot I walked through a gate and down a dirt path until I saw them:  birders.  There were three of them spread out over the area, but as I approached I noticed they were coming together at one spot.  By the time I caught up they were all looking in the same direction, at a glowing white blob in the distance.  Yessssssss. 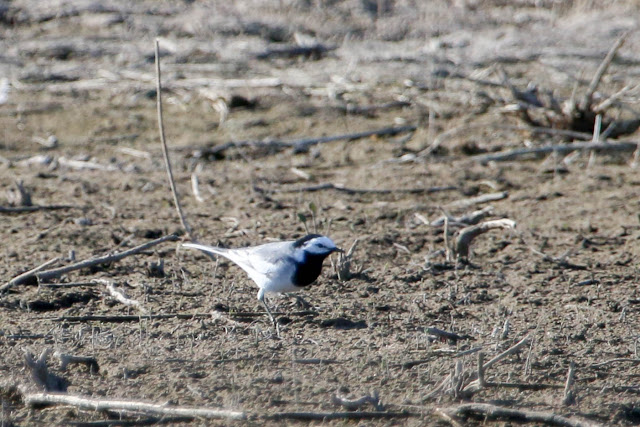 The Call of the Wagtail was real. 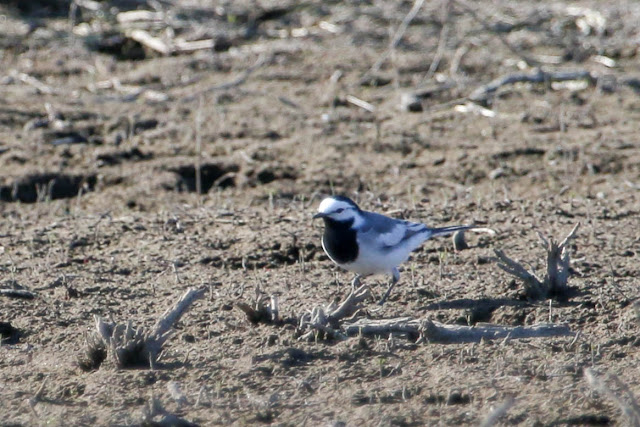 This bird was like a gorgeous but crazed meth-head, roving the mudflats searching for insects, never sitting still.  The other three birders and I crept towards it in small increments for better viewing and the bird did not care one bit.  After twenty or so minutes with this Siberian beauty a helicopter flew over and the bird spooked and flew off out of sight.  Sigh.

I walked back to the car, giddy that I had succumbed to the Call and now had almost two full days to rack up year birds.  My first stop was the feeders at the Sisters Best Western where a flock of Pinyon Jays took turns decimating a suet block. 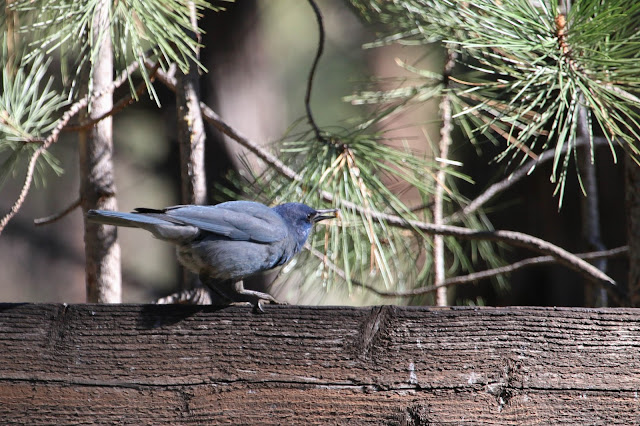 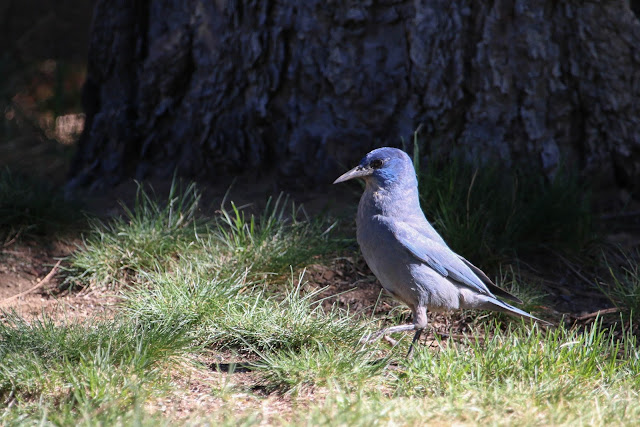 From there I birded along Indian Ford Road near Calliope Crossing, deciding to put the F back in FJ. 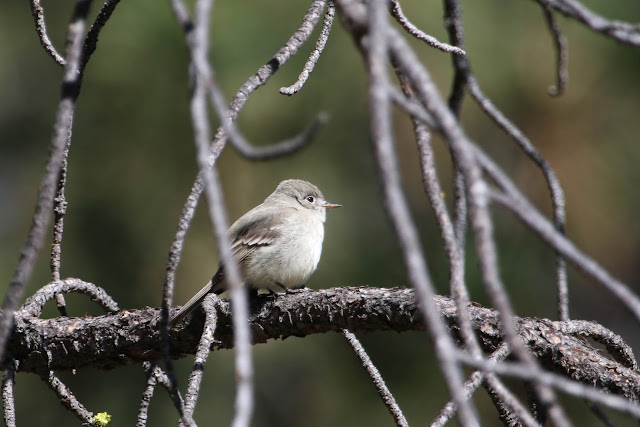 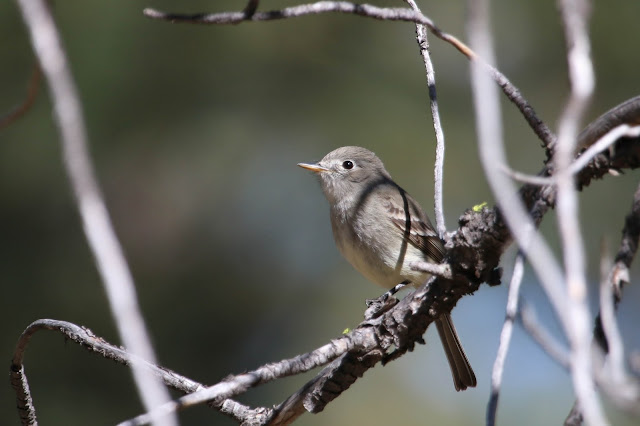 These two photos are of the same bird looking quite different in different light and poses.  I believe it to be a Gray Flycatcher.  Listen to it here.

After exploring that road I drove over to Cold Springs Cutoff where I had very little success, then on to FS 1018.  I was hoping for Green-tailed Towhee along this dirt side-road but only came up with piles of Fox Sparrows and Yellow-rumped Warblers. 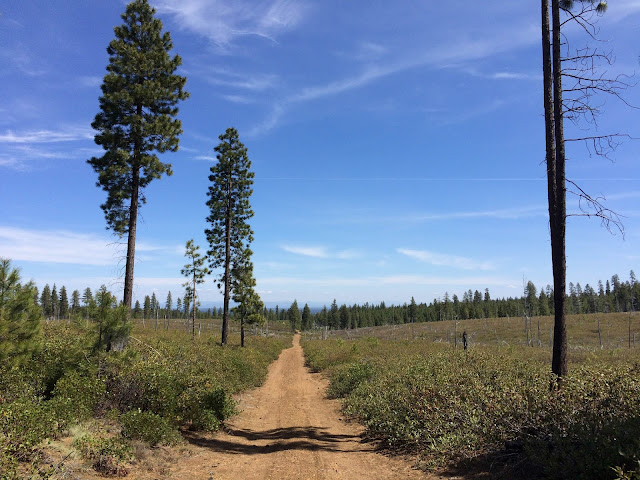 It was a butterfly highway. 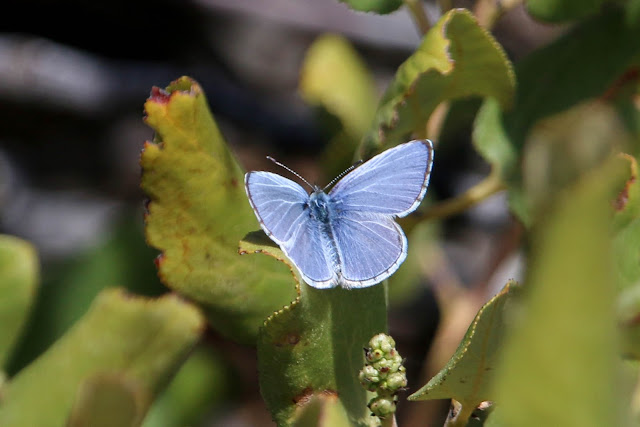 Spring azure (or something close) 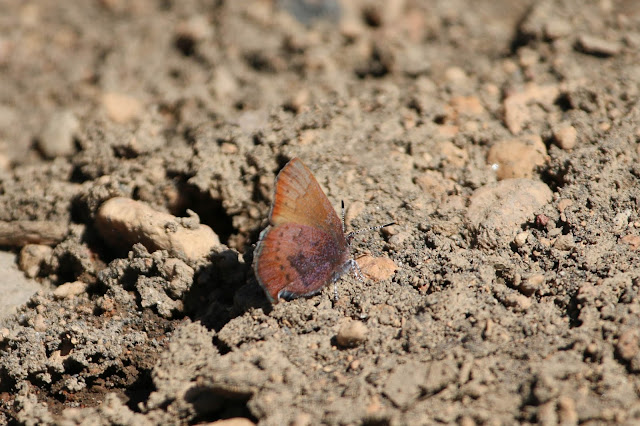 We went for a hike along a forest road where I had good luck with birds once before.  This time I barely saw any birds at all, but I did hear a Sooty Grouse, a new county bird for me there.  In the late afternoon I decided to head back to Bend to get a cheaper motel as it was too cold for me to want to camp.  I found a place on the outskirts of town adjacent to a 24-hour adult superstore.

In the morning I packed up and drove over to the Millican area to visit the Greater Sage-Grouse lek.  The birds were displaying proudly in the distance. 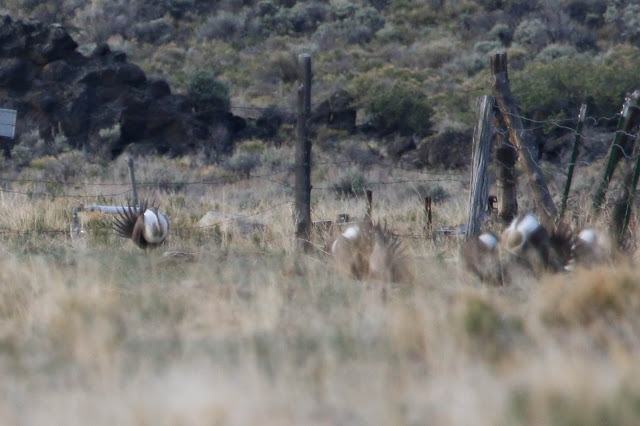 This sagebrush area is ripe with other sage birds and I was happy to visit with both its thrashers and its sparrows. 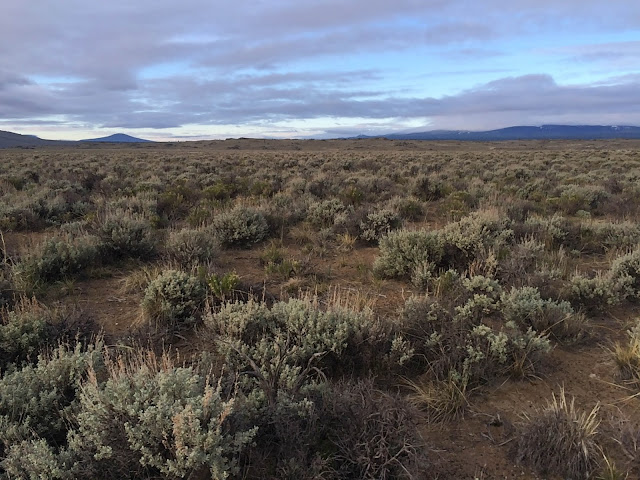 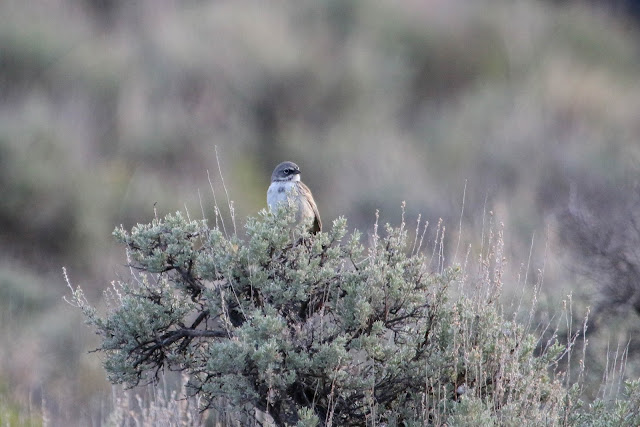 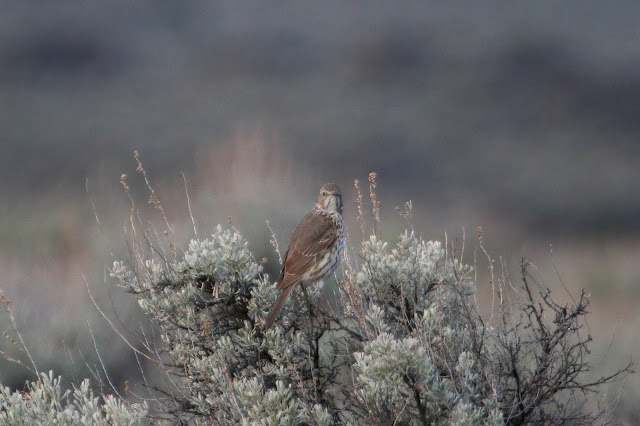 A Golden Eagle made for a nice surprise, perched on some kind of frame. 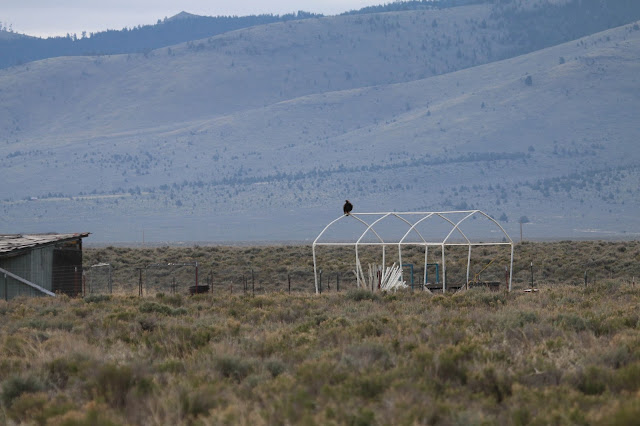 It got sick of me staring at it and flew across the road to another pole, and let me get even closer. 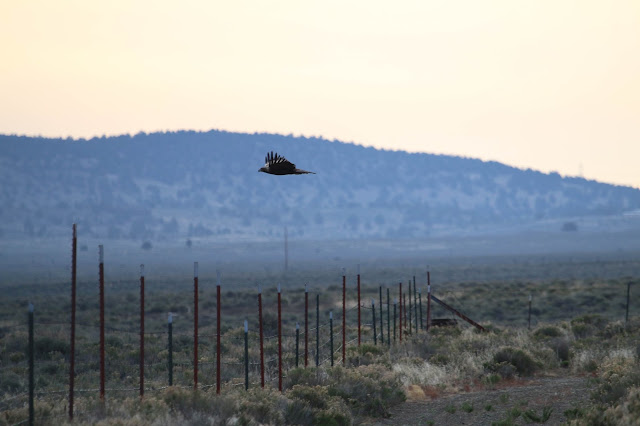 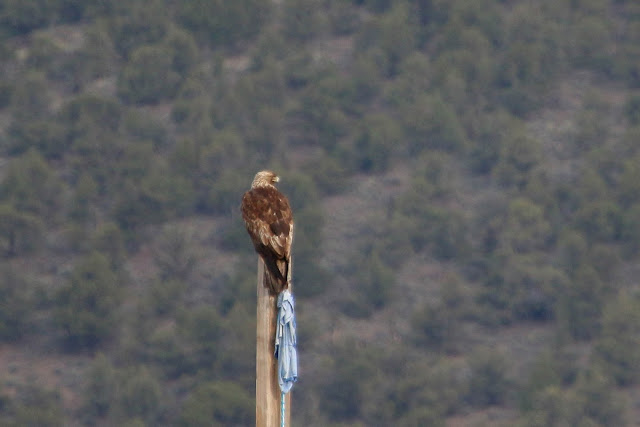 This was one of the best looks I've ever had at a Golden Eagle so I was stoked, until I remembered the scene in that Nature episode, The Sagebrush Sea, where the eagle tries to take a grouse.  Hmm.   I abandoned the sage to head back to the pines near Sisters, stopping once more at the Best Western feeders but with no birds at all this time.  A few deer nearby were entertaining. 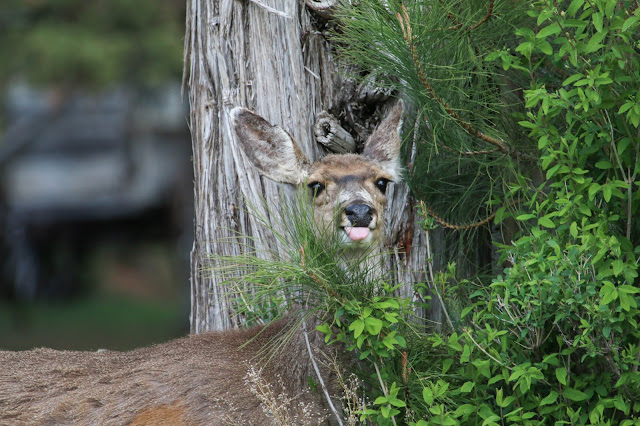 I really wanted to see some woodpeckers and I decided the best plan was to park at some random dirt road off 242 and walk around until I heard pecking.  First bird heard was a Townsend's Solitaire, of which there were many. 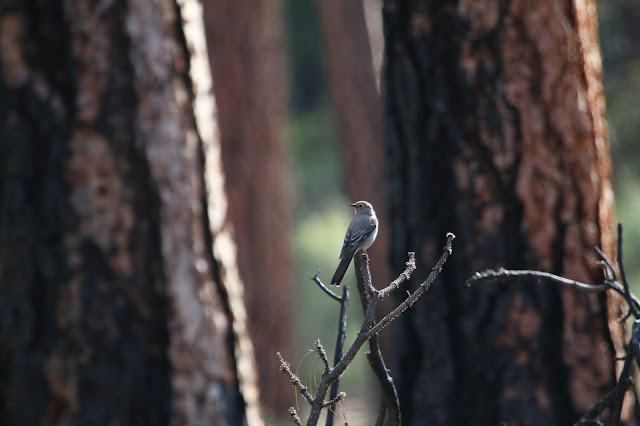 Western Bluebirds were conspicuously tending to nest holes all over. 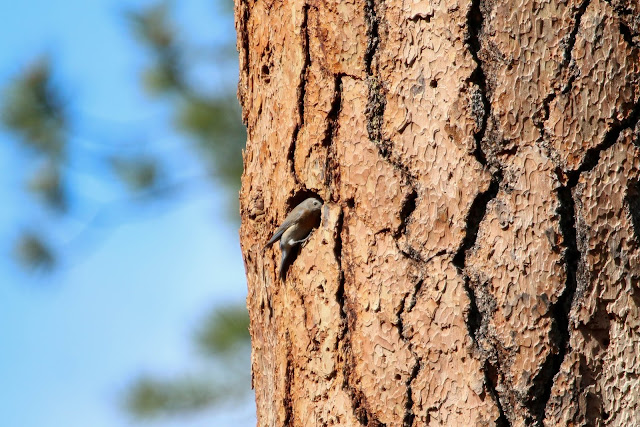 The mutts and I walked for a long time without any woodpeckers besides flickers and Hairys, but I was not discouraged.  I knew this is how it works. 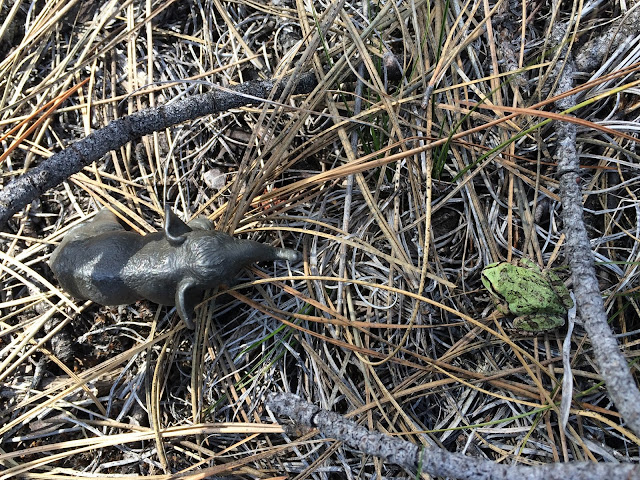 It was not a love connection and the frog hopped away into some branches.

We made a second round of the area as I was convinced we were in a good spot and I immediately heard pecking from several directions.  The first turned out to be a Hairy, but the second was a Black-backed! 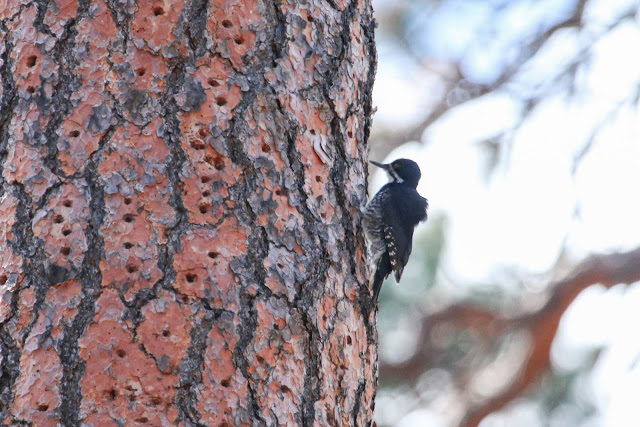 I was stoked.  I could smell victory as I followed a third pecking sound... 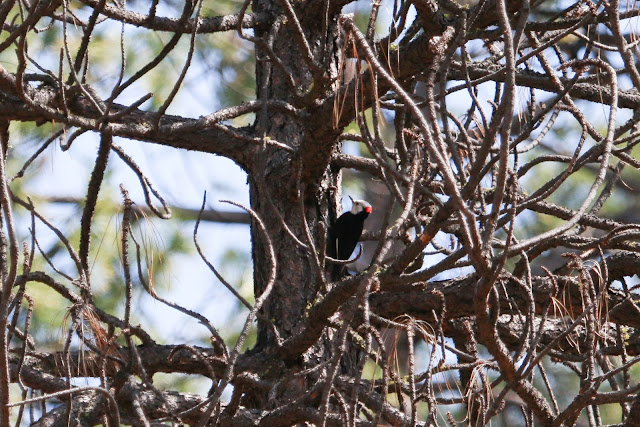 Yes!!  I love love love White-headed Woodpeckers and I really did not want to leave Sisters without seeing one.  Leonard was quite pleased as well. 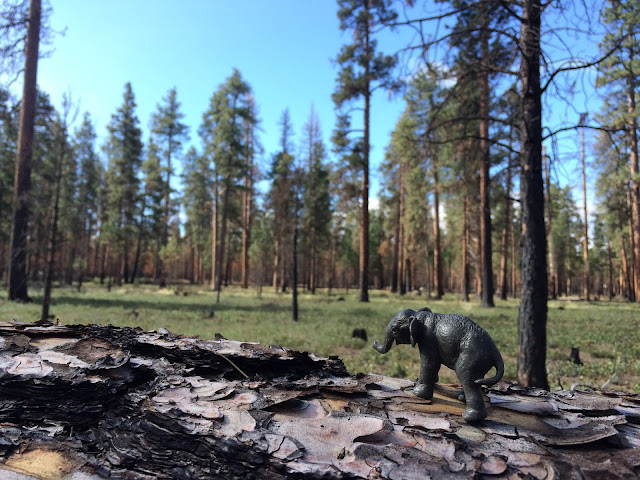 We took off towards Redmond to grab lunch, then headed to Smith Rock for one more year bird, the White-throated Swift.  I wasn't feeling a major hike so we only did the short trail to a viewpoint which was enough to find the swifts and take in the scenery. 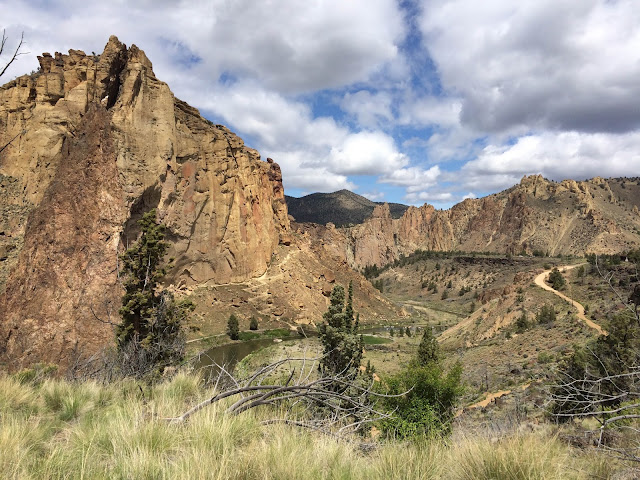 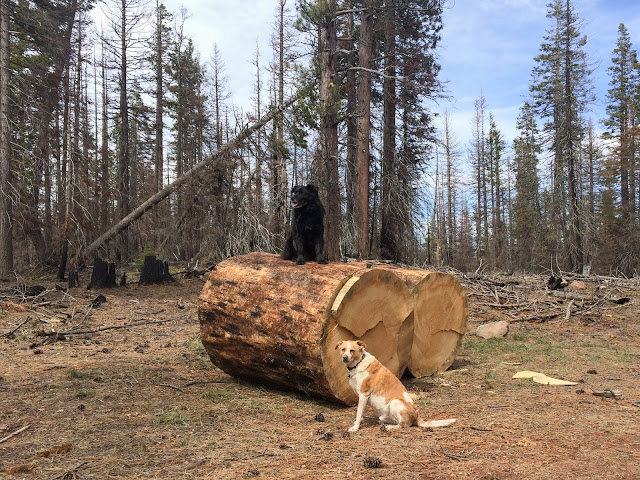