on April 05, 2016
"I hate that county." - A famous Portland birder on birding Yamhill County

I get it.  Birding is not amazing in Yamhill County.  It has the third lowest species list (225) in eBird in Oregon.  Right between Gilliam (219) and Sherman (234).  This says a lot.  I like a challenge, though, so this morning I headed down to the hated county with the goal of seeing 40 new species there, to add to my unimpressive 32.   I used the ECAS Birding Oregon website and eBird to pick a few places ahead of time, and I began the day at the Sheridan South Side Park, adjacent to the local sewage treatment plant AND a correctional facility. 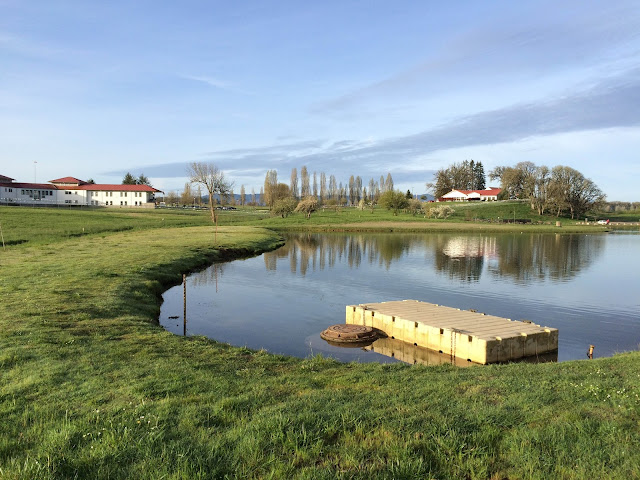 I picked up 16 new species here, not a bad start. 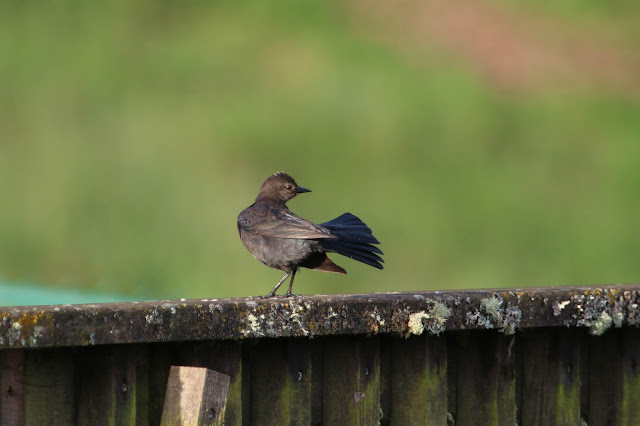 Brewer's Blackbird was the first county bird of the day 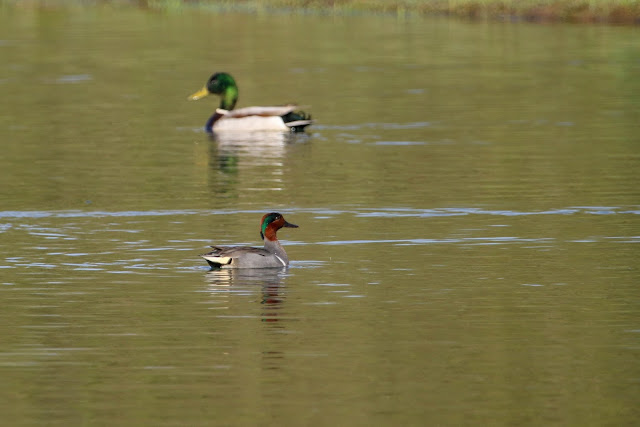 After making my way around the fishing pond and scanning the STP I noticed that the willows separating the two were active.  The world had vomited Yellow-rumps and Orange-crowneds and the willows were packed. 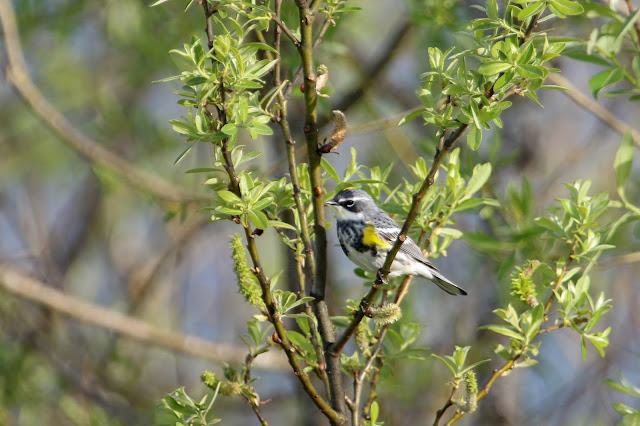 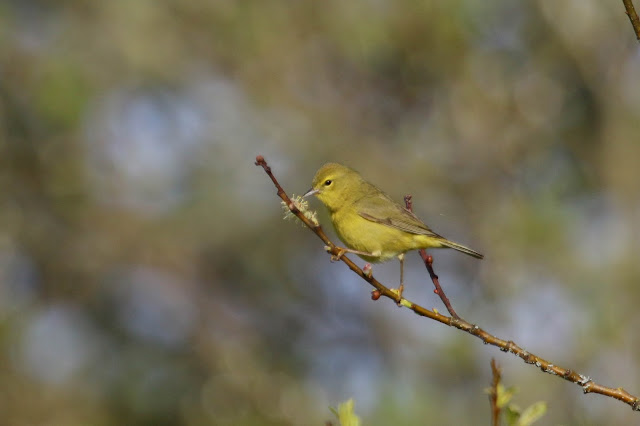 Before heading to the next spot I used the port-o-potty with this bold jumper: 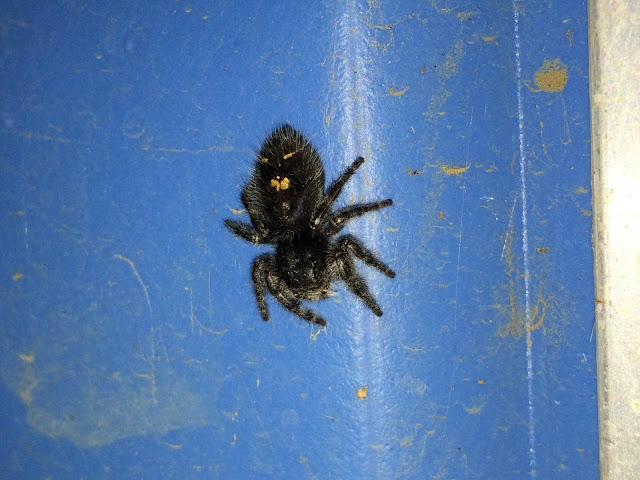 Instead of visiting my next "planned" birding spot, I noticed a Hotspot a couple miles farther west on Highway 18, Stuart Grenfell County Park.  I knew nothing about it but drove over to check it out. 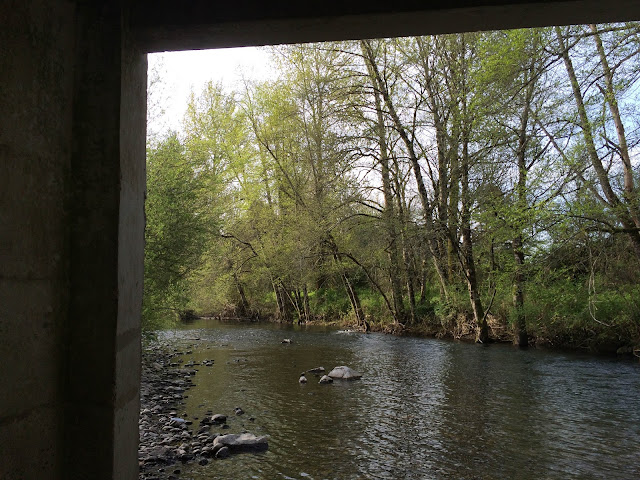 The park is on Mill Creek, where it passes below Hwy 18

Before I had a chance to make any kind of conclusion on this small park I was distracted by a bird flying to a tree above me, a female Hairy Woodpecker.  She was in awkward light for photos, unlike a couple of Chestnut-backed Chickadees. 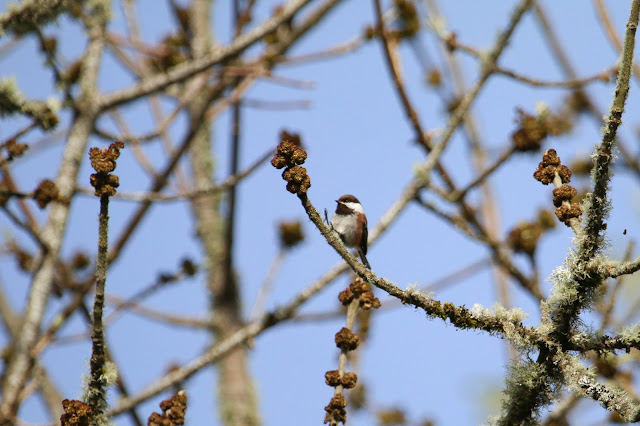 I walked over to the creek where a male Hairy Woodpecker was going to town on a log.  This bird did not give a crap about me, and we hung out for awhile.  It was pretty rad, one of the best times I've had with a Hairy Woodpecker ever. 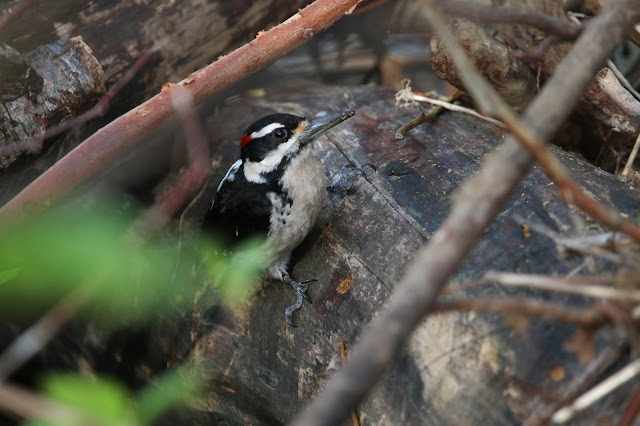 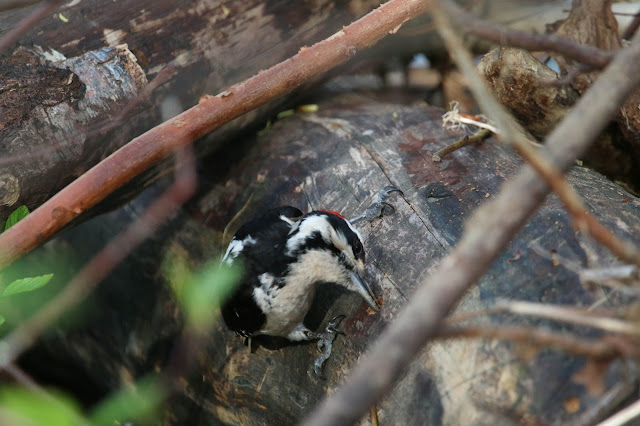 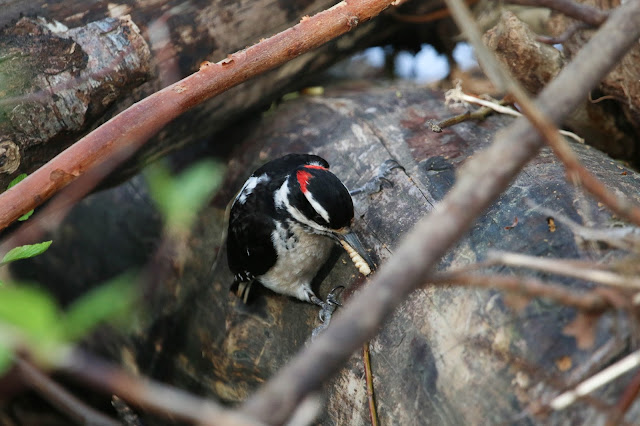 Overall this park was not super exciting but I thoroughly enjoyed it regardless.  Worth a quick stop if you're driving down 18.

Next I headed back east to another county park, Deer Creek, which is far more popular than old Stuart Grenfell (where I'm now tied for 2nd in species for the hotspot, with a whopping 12). 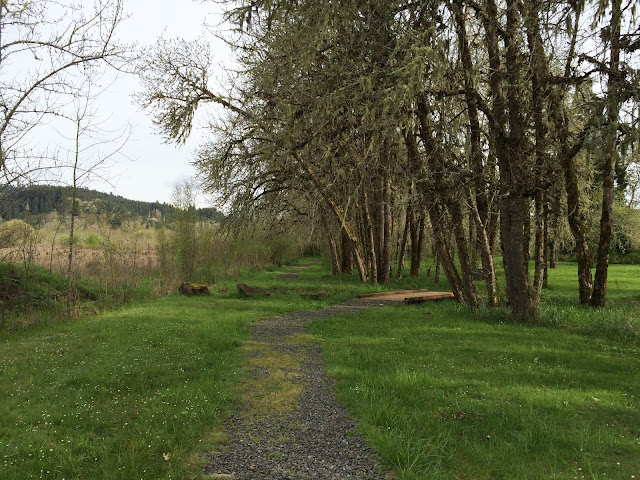 I only managed 12 species here also, including my first Oregon Common Yellowthroats for the year. 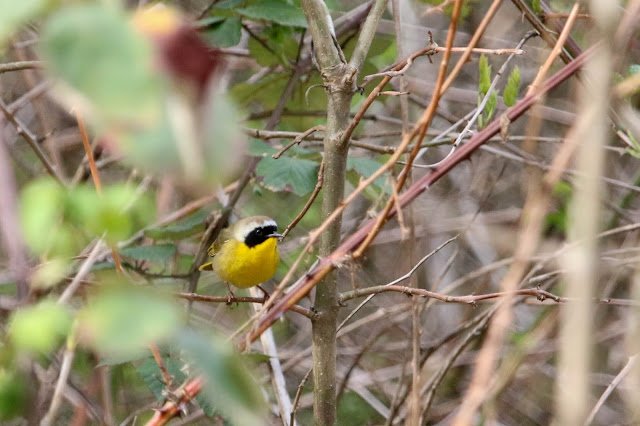 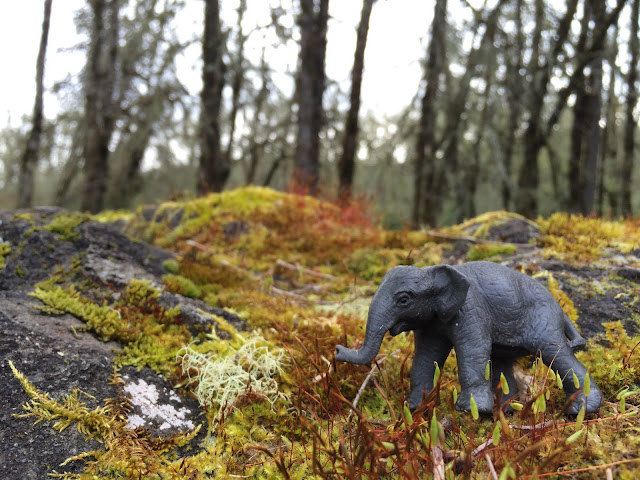 After this park I got back on 18 and realized I should take some back roads for dumb county birds like House Sparrow, and ended up on McCabe Chapel Road, and then at McCabe Chapel. 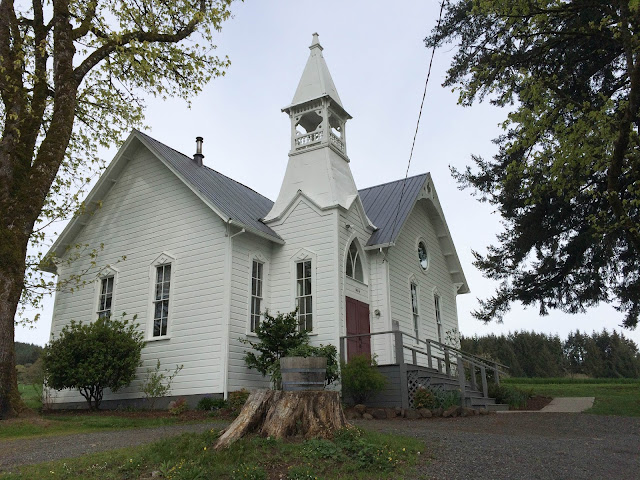 It proved a decent spot to view the surrounding area, though the only new bird I picked up was White-crowned Sparrow.  I continued along the road and saw a sign for a cemetery.  Sure. 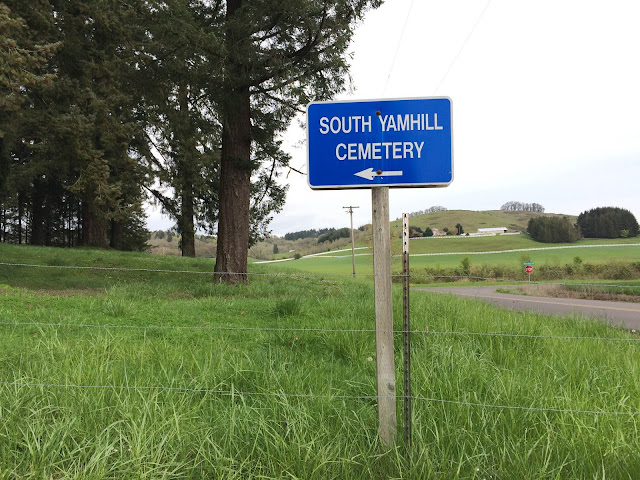 South Yamhill Cemetery is small with a main drive up a hill where it dead ends. 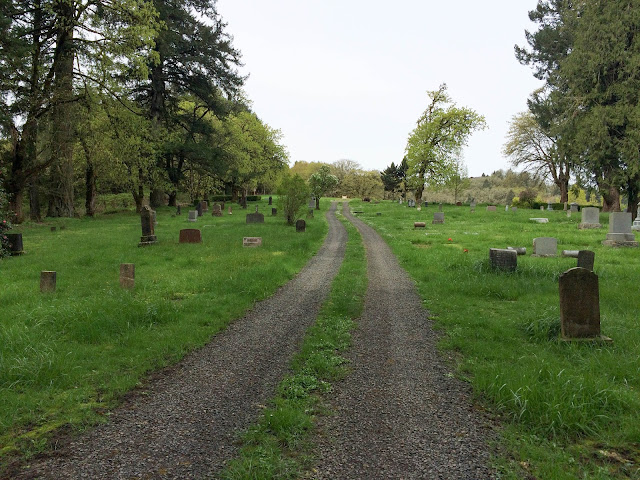 I parked at the top and heard birds.  Lots of birds.  It appeared to be a bit of a migrant trap with singing Yellow-rumps, a Hutton's Vireo, a Chipping Sparrow, Ruby-crowned Kinglets, and more.

I picked up six new birds here and made yet another new friend. 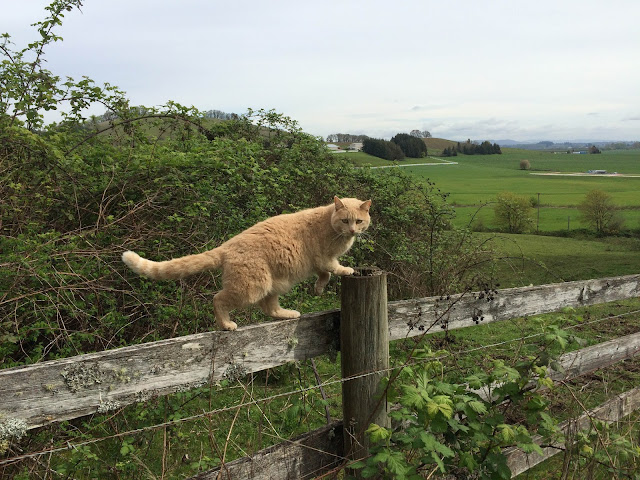 She seemed to really enjoy perching on this fence, waiting to murder sparrows when they hopped out.  I pet her anyway, it's not her fault her parents hate birds. 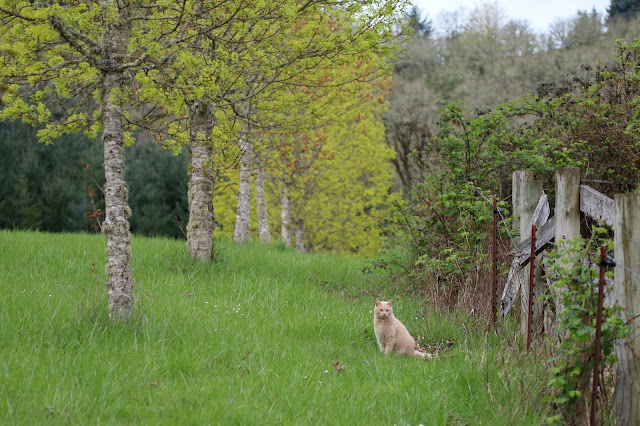 Though I have few bird photos to show for it, this is a spot I would definitely recommend. 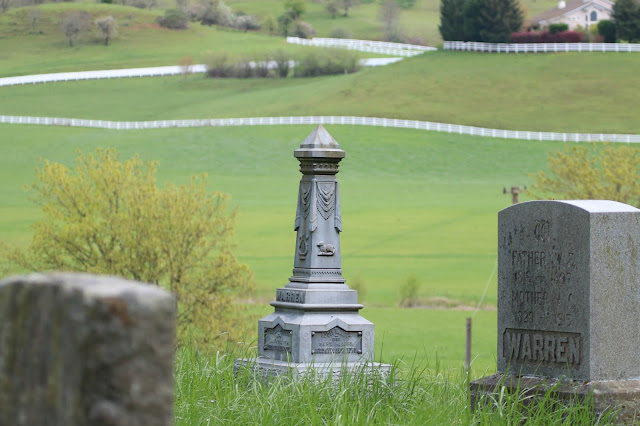 After stopping for a sandwich I drove out to Grand Island (aka Willamette Greenway), yet another new place to me.  I followed my new friend through the woods... 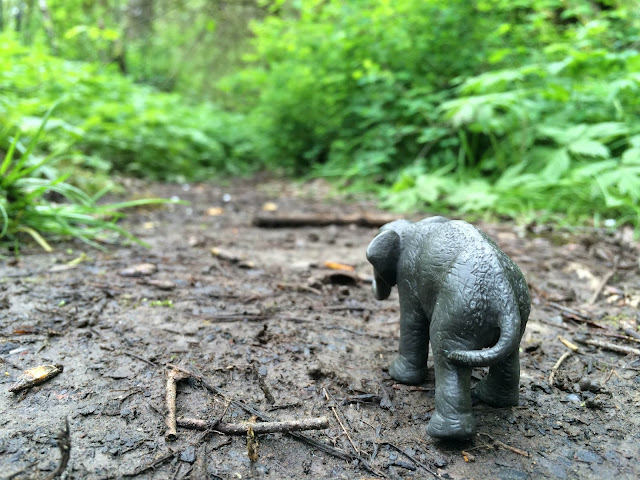 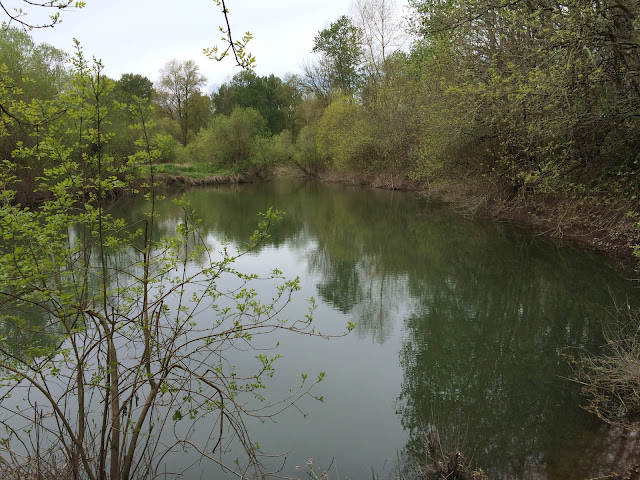 Much of the area reminded me of birding Kelley Point Park but with no paved pathways, far fewer people, and more scotch broom.  Many birds were gathering nesting material. 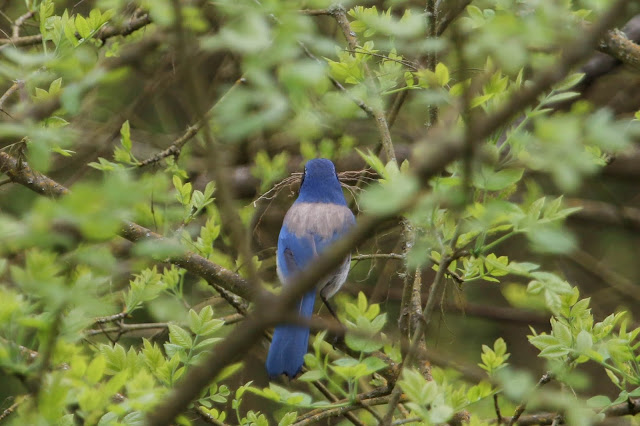 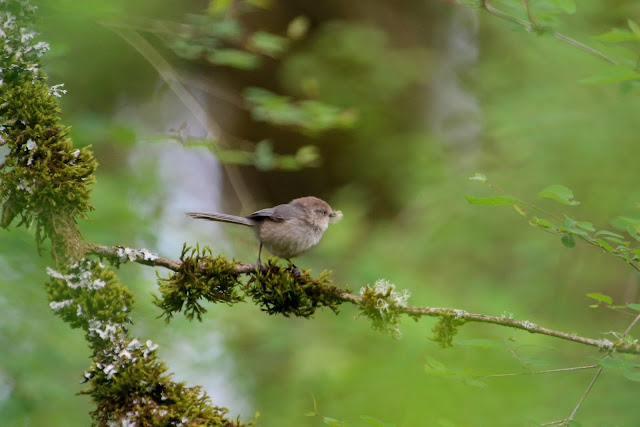 I picked up six county birds at this park, and several along a nearby road.  I planned to head home after that but I stopped when I heard House Sparrows at the four-way intersection in Dayton, then noticed another county park a few blocks away, Dayton Landing. 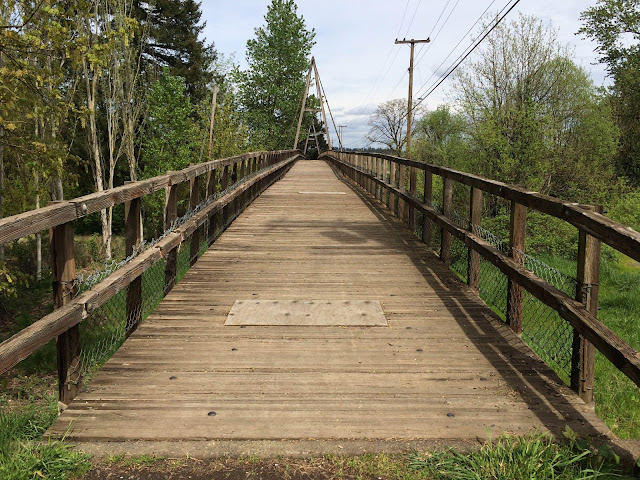 The park is mostly a small boat launch on the Yamhill River, which this awesome pedestrian bridge crosses over to another park. 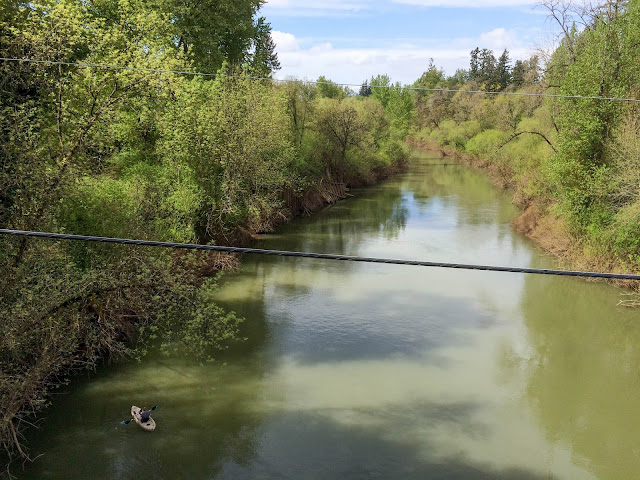 On the other side of the bridge I picked up my last two county birds, Cackling Goose and Great Blue Heron, bringing my total to exactly 40 new birds, 57 for the day.  I'm psyched to go back for the next 40 now.  Bring it on.  Good times!
Brewer's Blackbird Bushtit Chestnut-backed Chickadee Common Yellowthroat Green-winged Teal Hairy Woodpecker Orange-crowned Warbler Western Scrub-Jay Yellow-rumped Warbler