It does not snow much here in Portland so when it does both the humans and the birds go absolutely bananas.  Our recent storm was scheduled to arrive mid-day Thursday, which was perfect since it was on my weekend.  The east winds were howling all Wednesday night and Thursday, freezing up the bird baths quickly.  The mutts helped me keep them under control. 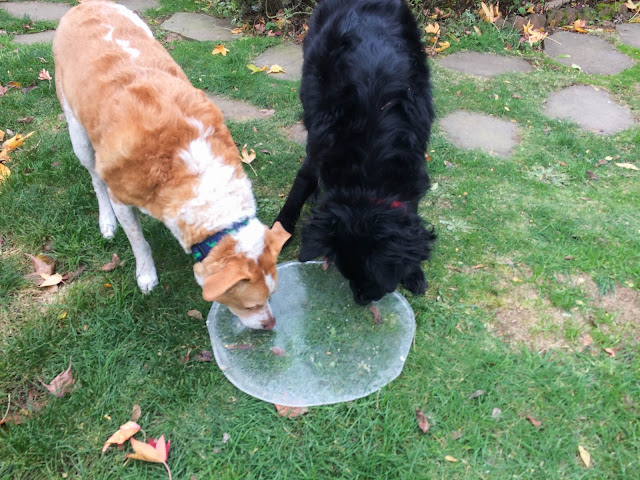 We will eat bird bath ice for you.

The birds appreciated our efforts, especially once the snow arrived. 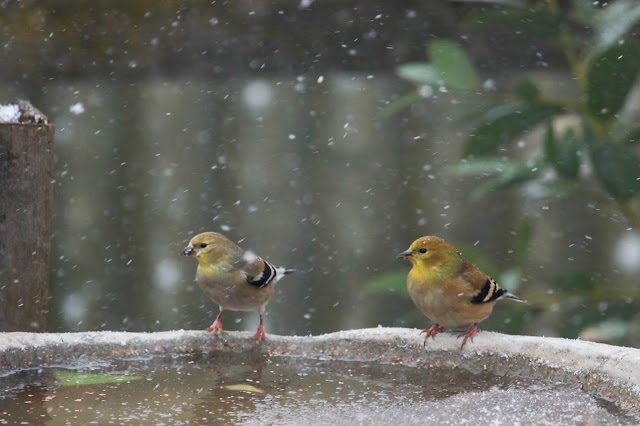 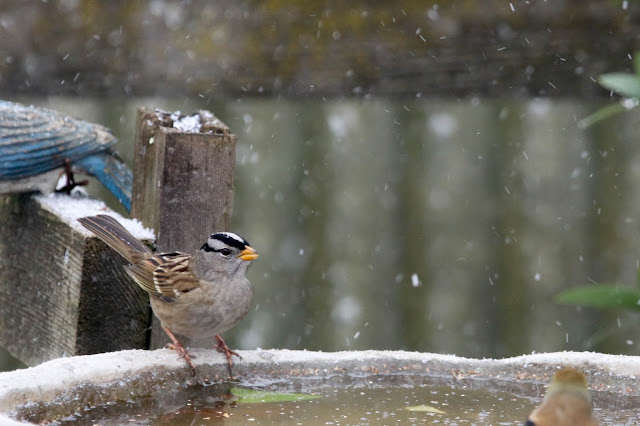 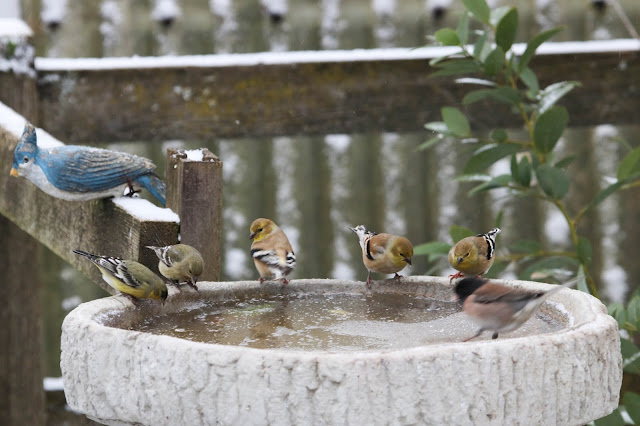 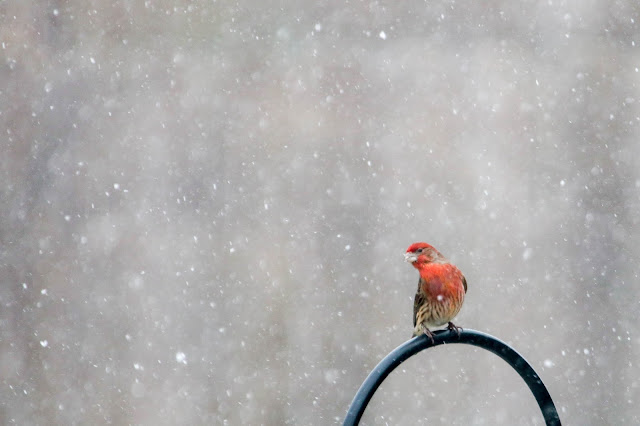 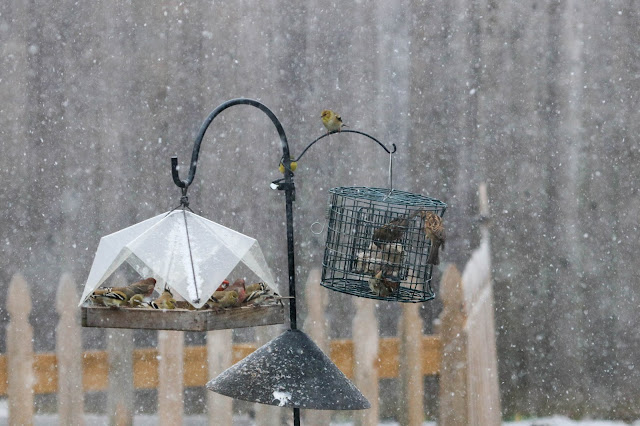 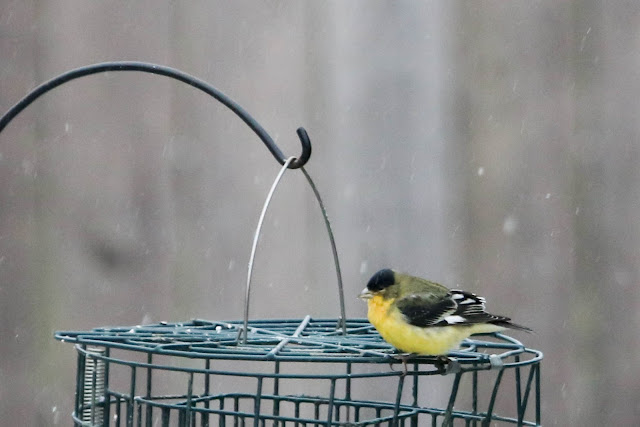 I was hoping for some interesting birds to show up out of desperation, but nothing too crazy made an appearance.  A Spotted Towhee was a decent uncommon bird for the yard. 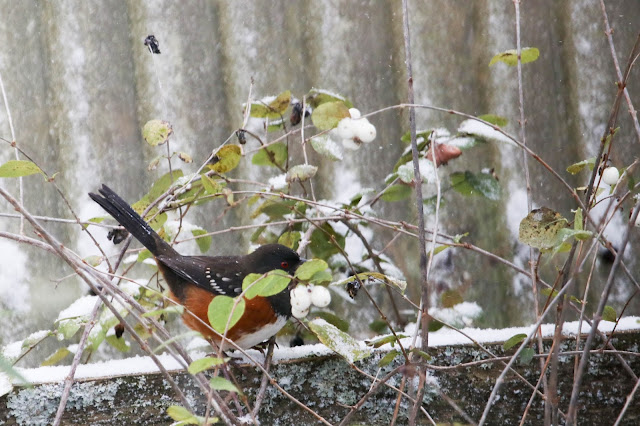 In weather like this much work goes into keeping hummingbirds happy.  Unlike most places in the country that have freezing weather in the winter, Portland has year-round hummingbirds.  This means they rely heavily on us when the temperature drops.  I do my best to keep their nectar unfrozen and accessible. 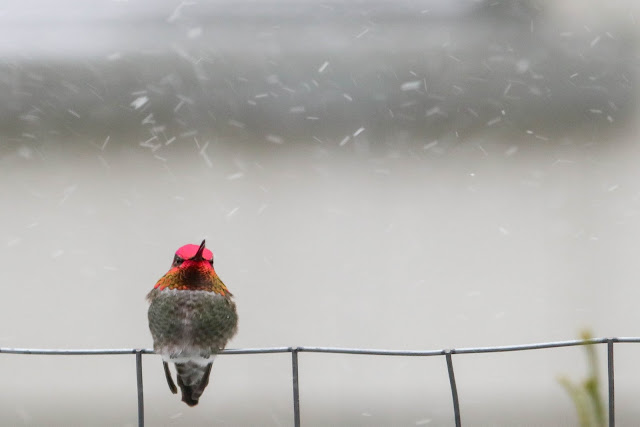 This is my driveway Anna's Hummingbird who guards my driveway feeder, along with my neighbor's new little feeder about ten feet away. 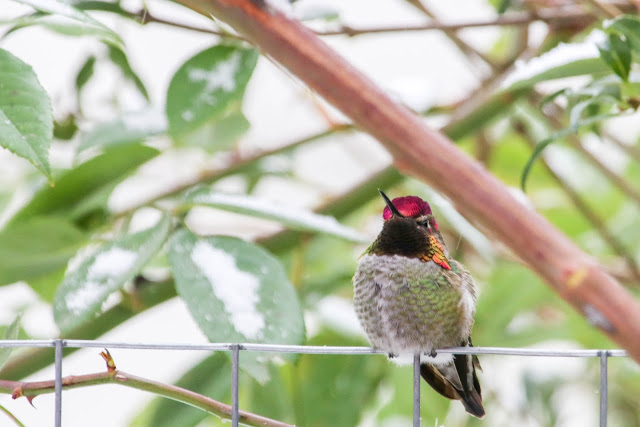 He is handsome.  I have a second male that guards the backyard feeder who is also handsome. 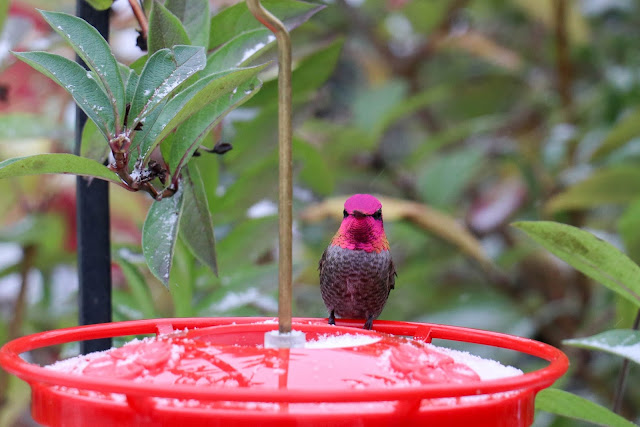 I might have to break down and get a third feeder because these two dudes won't let any females near the nectar.

When the weather is rough like this I allow something that I do not usually allow: 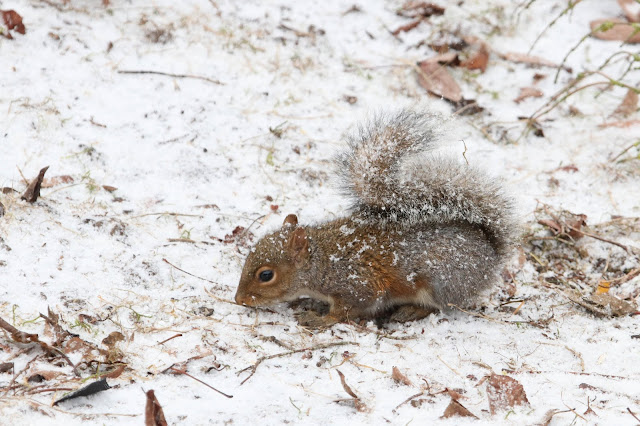 Ugh.  This one is particularly cute.

On Thursday evening the snow changed over to freezing rain.  This meant that Friday morning the whole city was coated in ice, which was pretty to look at but terrible for most other uses.  Jake in particular had a rough time walking outside and kept falling down.  I tried breaking up some paths for him to walk but I think the sharp edges of the broken ice made him even more miserable. 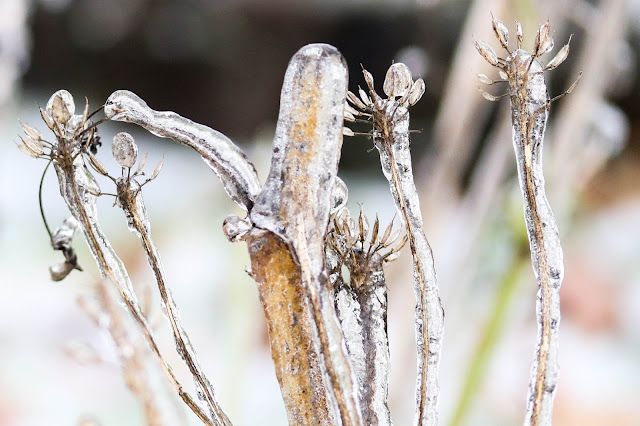 Sure was pretty though!  I was crunching around the front yard taking macros when a woman waiting at the bus stop one house down walked over.  She asked if I was a photographer for a career and I said no.  She said, "you're out in this for fun???"

A few birds on ice from yesterday: 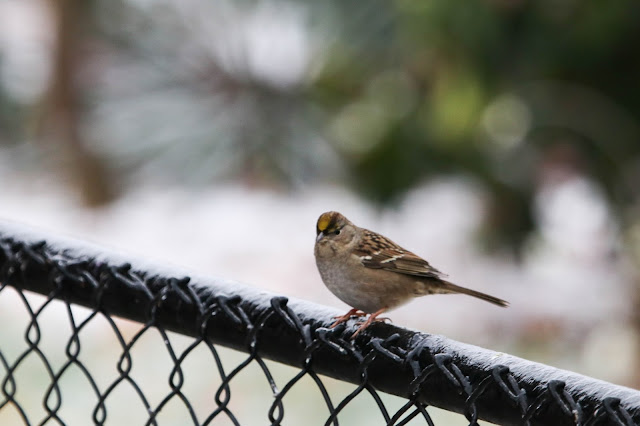 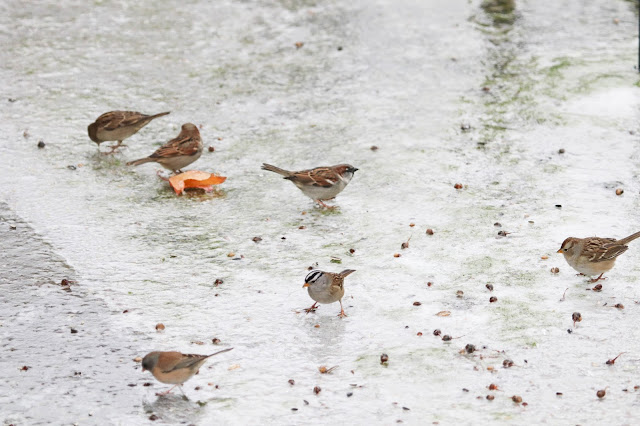 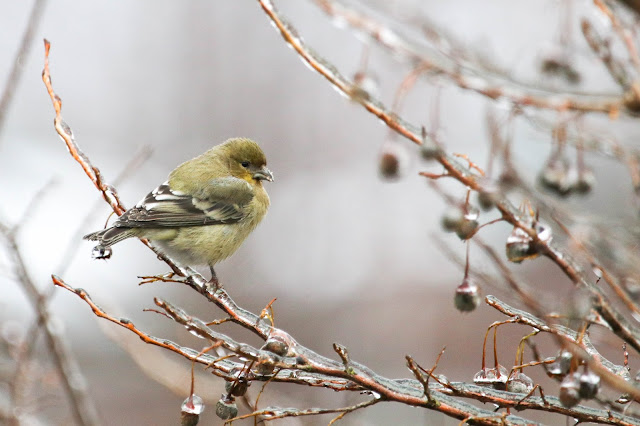 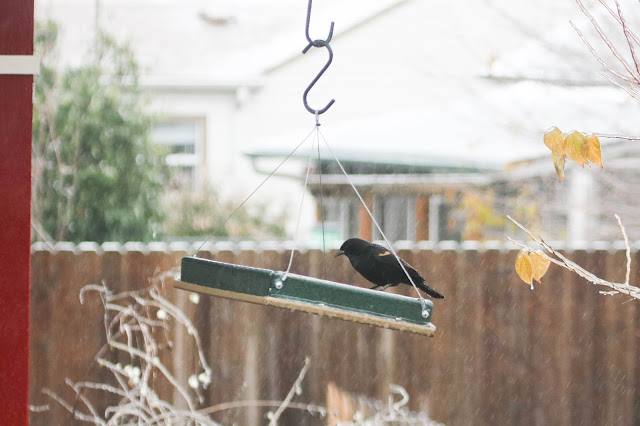 My favorite bird sighting from my weekend had to be one that I did not photograph.  I was sitting on my couch and heard a chip note I recognized but could not place.  When I looked over at the window a little grey head was peering back at me, with a yellow crown and a yellow throat.  And then it was gone.  A Yellow-rumped Warbler!   This is not a rare bird here but I've only had one a few times in the yard and certainly never perched on my windowsill looking at me.

Okay, now that we have all the snow birds and ice birds out of the way I want to talk about Snowbirds.  When I was growing up my mom referred to Dark-eyed Juncos as Snowbirds and I didn't know till I started birding that they were the same thing.  Back in our CT yard as soon as snow arrived so did the slate-colored juncos.  Here in my Portland yard my junco population tripled at the very least with the arrival of snow. 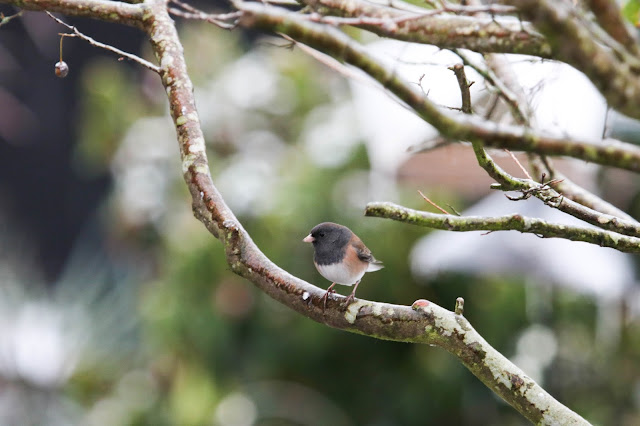 Most of the juncos we see in Portland are of the Oregon race.  How fitting.  But sometimes we get other, more interesting birds to ponder.  A few days ago I visited by a bird with a unique white patch on its cheek that was clearly not an Oregon junco. 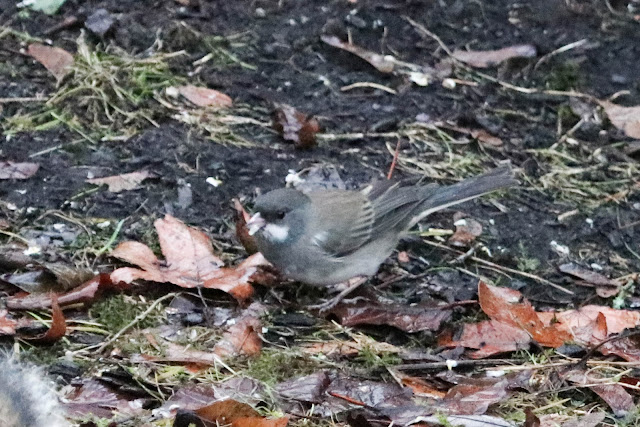 There is no pink anywhere on this bird, though it seems to have enough of a contrasting hood that I'm not sure it can be considered slate-colored.  Could this be a Cassiar junco?  Maybe so.  I had assumed this bird would show up with the rest of the juncos during the storm but I never saw it again. (*Cassiar junco is generally considered to be a mix of the Oregon and slate-colored races). 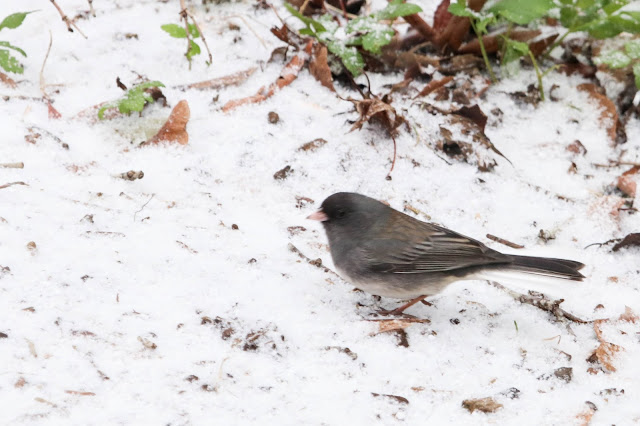 The above bird has a less obvious hood. 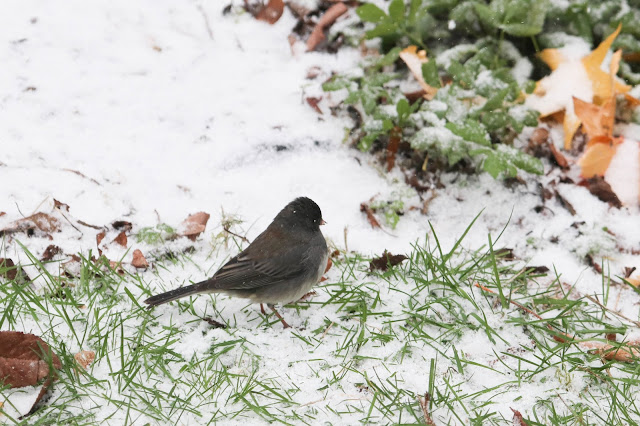 Another bird that showed up in the ice: 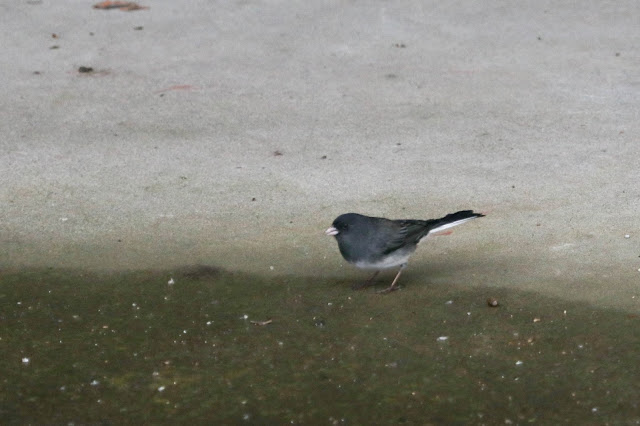 Now this bird seemed to be as slate-colored as it gets.  Yay.  If you want to read more about the various races of junco in the northwest, check out this article on eBird.

Anyway, this weather has been fun and all... 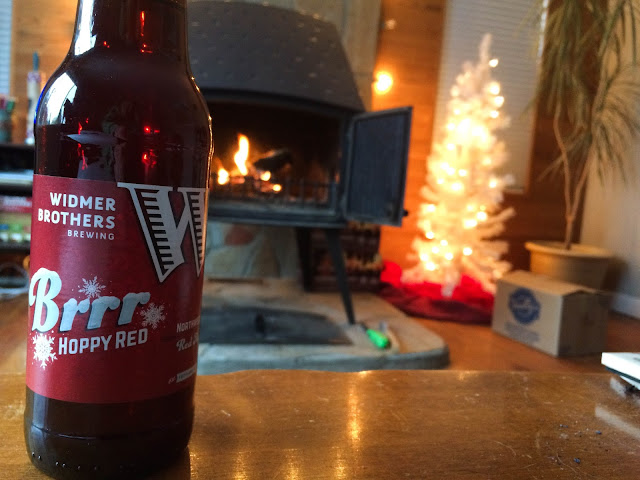 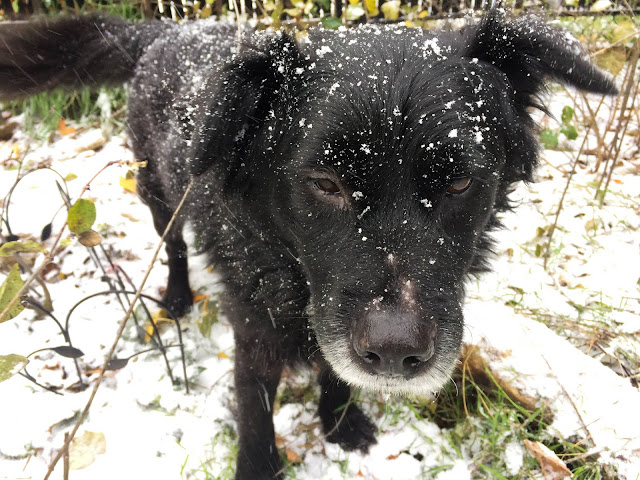 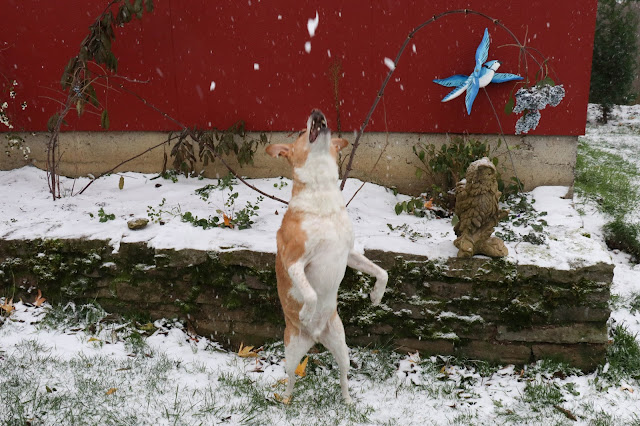