Guys, this whole Five Mile Radius thing is really catching on.  It started with the Big Day challenge scheduled for January 7th, and now my friends Sarah and Max are planning a 2017 5MR Big Year!  With eBird it's easy to keep track of the radius by creating a "Patch" list, and including all hotspots and locations you use that are in the radius.  You should really try this out.

Last week Portland had yet another snow storm predicted for Wednesday afternoon and after birding all morning I made it to my grocery store as snowflakes began to fall.  I pulled in to the parking lot and noticed the usual pigeons on the ground were joined by a decent number of gulls.  I took a quick cell phone shot to document this weird parking lot combo of Glaucous-winged, Herring, and Thayer's Gulls: 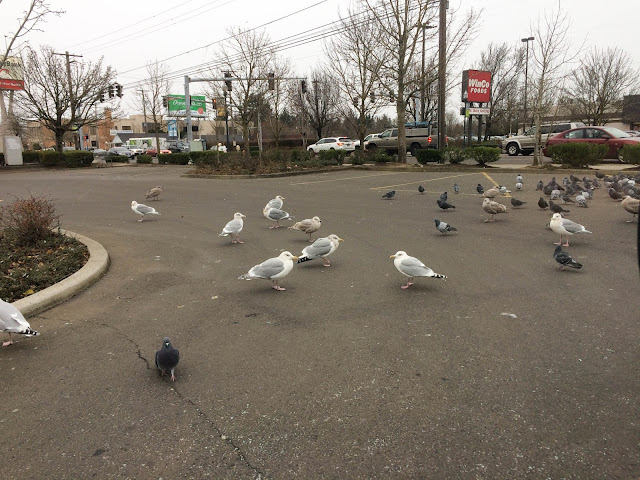 Thayer's Gulls are no better than pigeons.

When I came out of the store the birds were still there and the snow was still falling.  I realized I had my real camera with me and I should probably crush these guys. 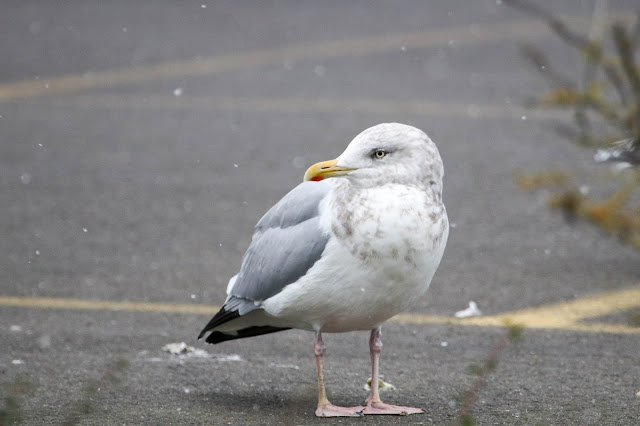 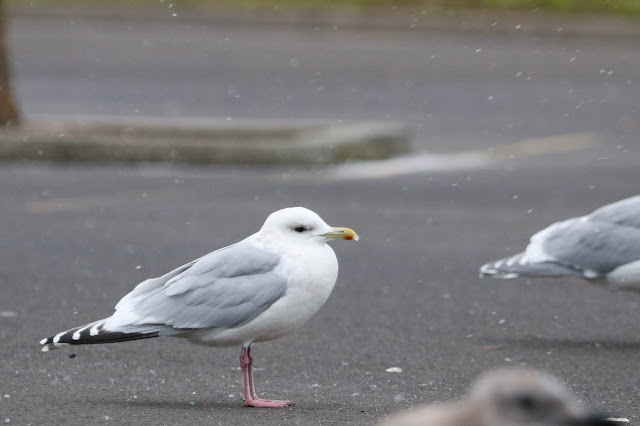 Fred Meyer shoppers drove cautiously around me as I knelt in the middle of a pigeon swarm. 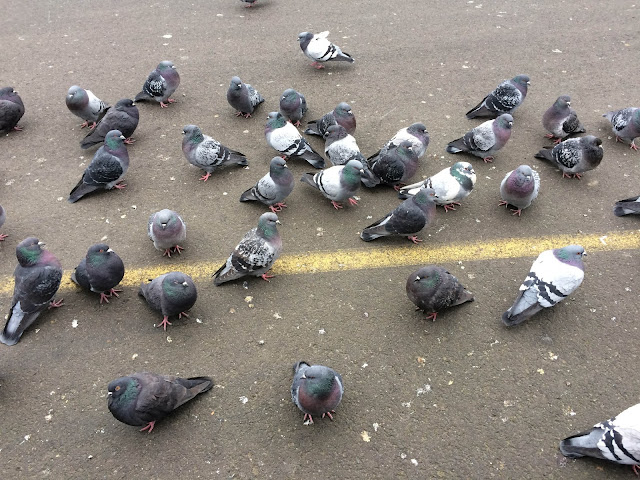 These grocery store gulls are made even more wonderful by the fact that they are in my 5MR and are more than willing to beg for crumbs.  Yessss.

The following afternoon I drove over to Blue Lake Park to check out the snowy scene there.  The gate was locked (Portland shuts down in 3" of snow) but I parked nearby and walked in.  It was rather pretty and the birding was decent. 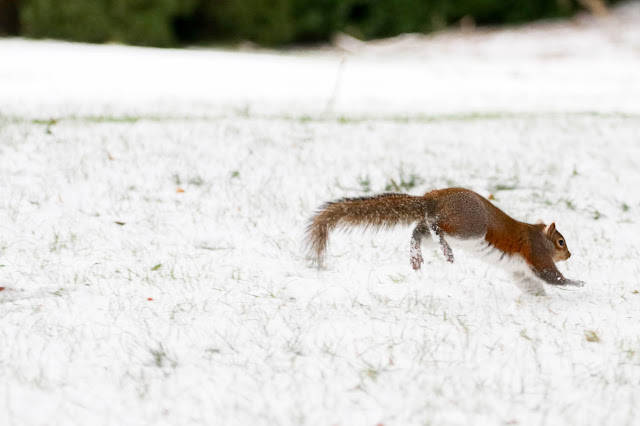 On the west end trails I came upon a scratching party that included several Fox Sparrows, a Hermit Thrush, a Varied Thrush, a Spotted Towhee, and a couple Song Sparrows. 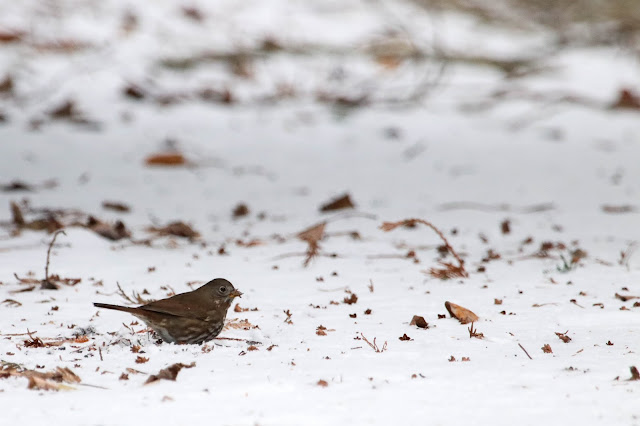 Some cute tracks on one of the paths: 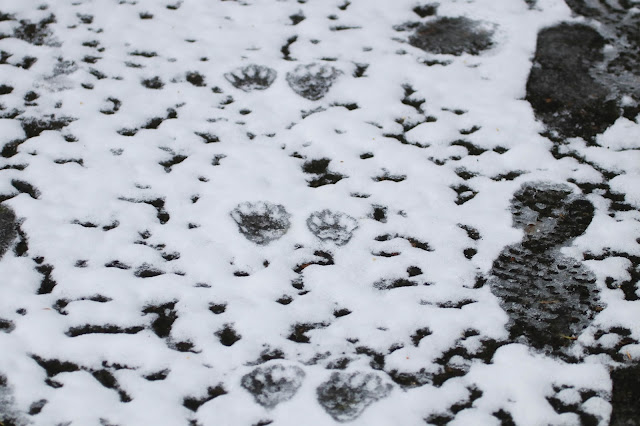 I learned from Colby that these are likely raccoon tracks because of how they are paired together.  I am used to seeing raccoon tracks in sand, and these toes look much more rounded but that's likely due to melting.  A camera trap set up needs to happen soon.

Back at home the birds were going nuts as the temperature did not rise above freezing for several days.  Sparrows finally decided to start eating the elderberries that had been sitting untouched for months. 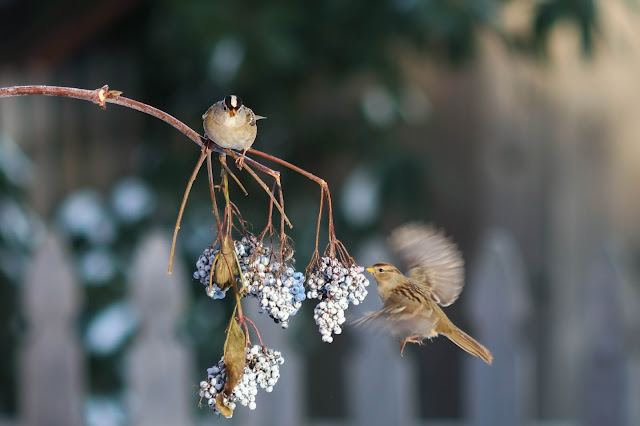 On a foggy dog walk at Mount Tabor yesterday (also in my 5MR) I was pleased to find a flock of five Varied Thrushes hanging out on a trail, the most I've seen together this winter. 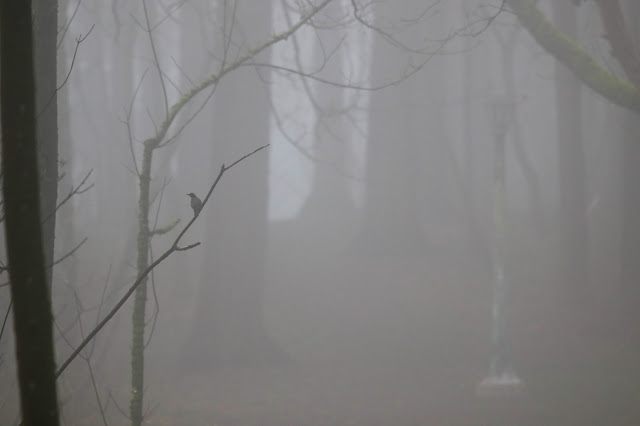 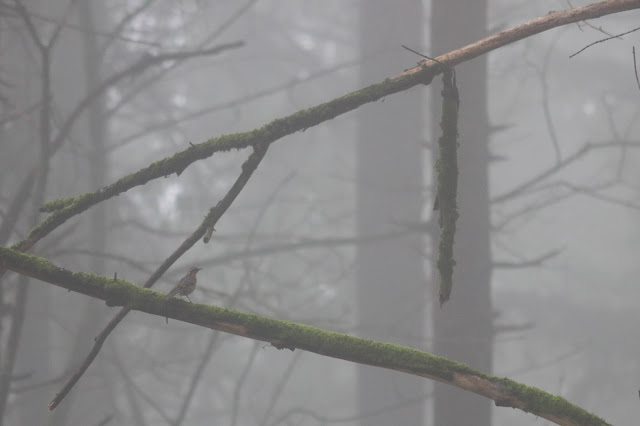 The reservoirs were totally fogged over and it was interesting to watch birds appear and disappear as we walked by. 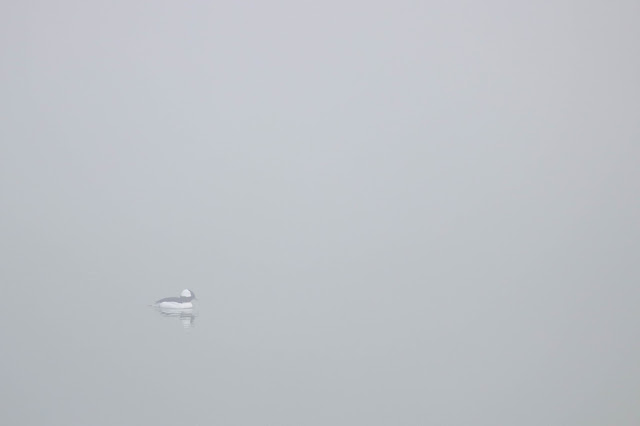 Towards the end of our walk the sun began to break through the fog and it looked pretty awesome. 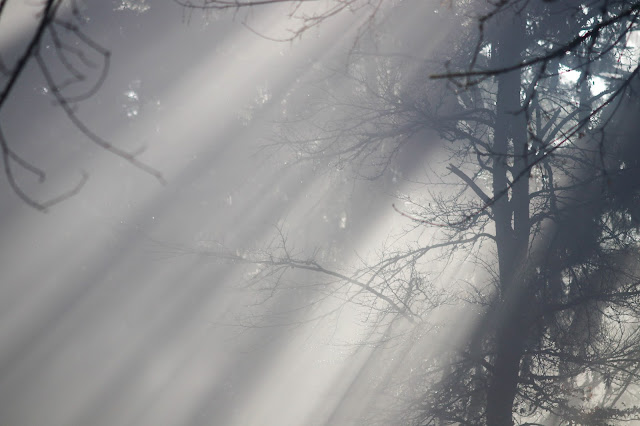 Apparently I was not the only one who thought it looked awesome.  As I was coming down the steps from the top a woman shouted up "Stop right there!"  I was a little confused but she continued "I have to take your picture and send it to you, it looks so cool!"  And so she did, and she sent me the photo with the promise she would not do anything creepy with my digits. 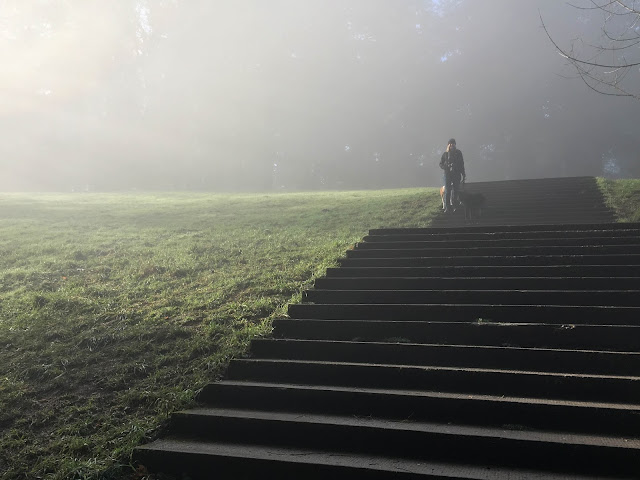 So that's a thing people do now, which I am okay with.

Yesterday afternoon I hit up some more of my 5MR spots like Mason Wetlands, Johnson Lake, and Mays Lake.  I had one possible Eurasian Wigeon at Mason so I will have to return with my scope soon.  Mostly the usual suspects otherwise. 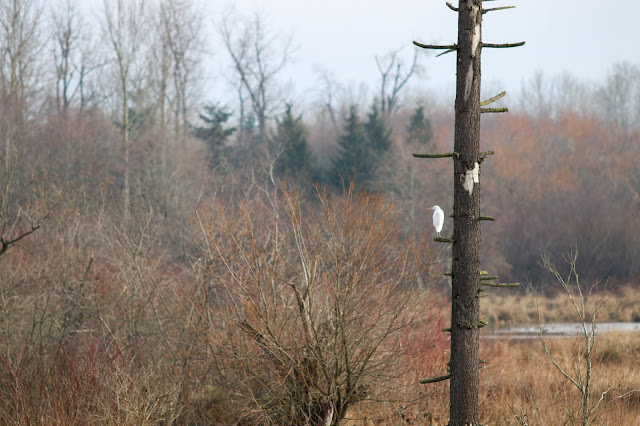 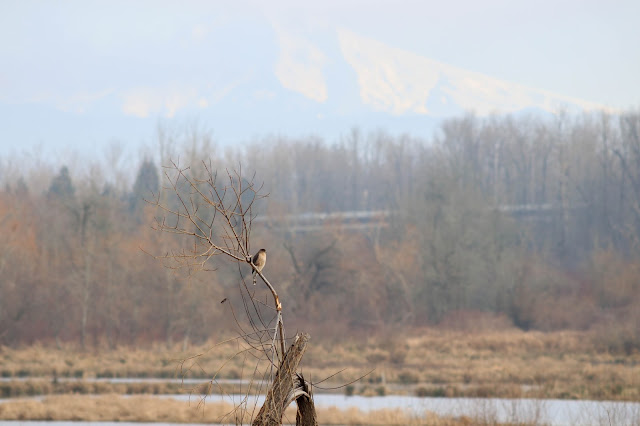 A post about my Five Mile Radius would be incomplete without my latest addition to my 5MR life list, a Burrowing Owl that showed up at Broughton Beach this weekend: 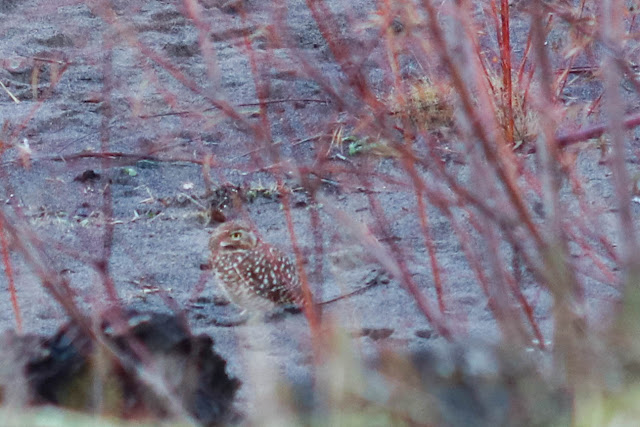 This bird should really consider a move upriver to a spot without so much human and dog traffic.

That's all I have for my 5MR right now, go start your own.  Cheers to the holidays almost being over! 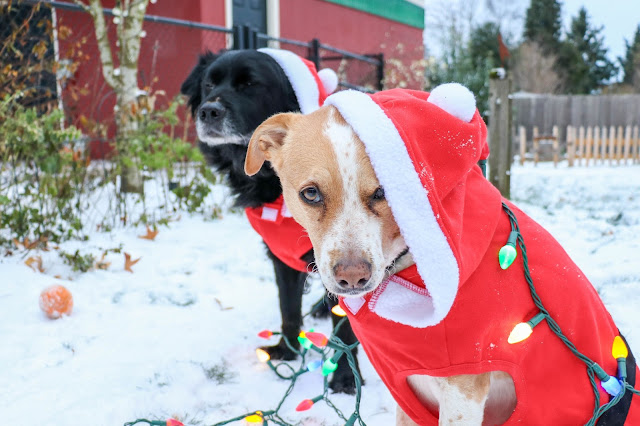