Broughton and Tabor in the snow.

on January 14, 2017
Surprise!  Our predicted 1-4" of snow Tuesday night turned out to be closer to a foot, which is almost unheard of in Portland.  The best thing to have when this sort of thing happens is a friend that doesn't mind driving in it.  Lucky for me, Jacob wanted to go out in it Wednesday morning and we set off for Broughton Beach. 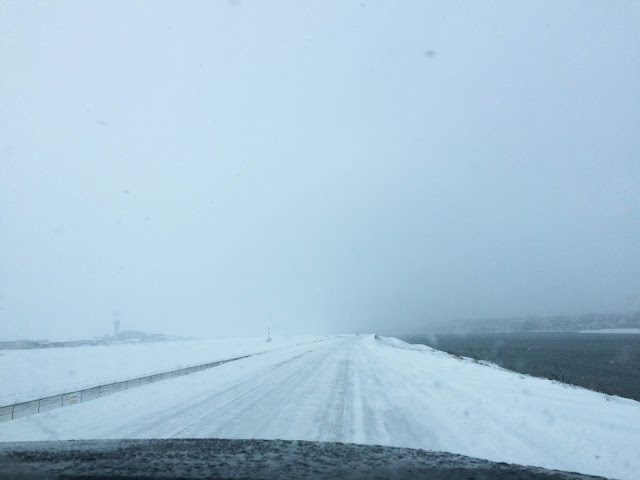 The snow was still falling when we arrived and continued to do so for most of the morning.  A flock of Horned Larks stood out: 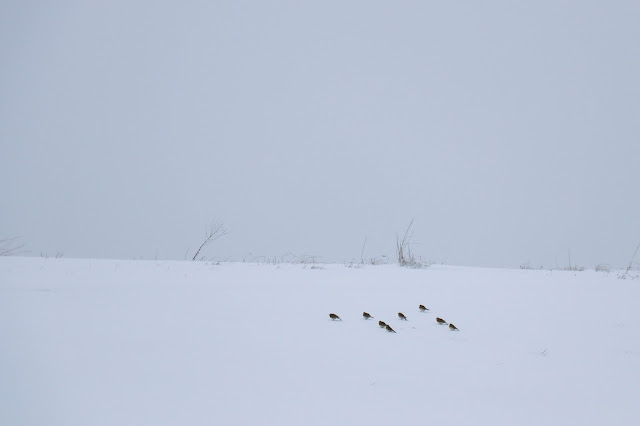 We hiked out towards the rocks hoping for owls and Jacob immediately pointed out a dot in the distance.  A Short-eared!  It was perched up on a rock as if hunting.  Then we noticed the coyote. 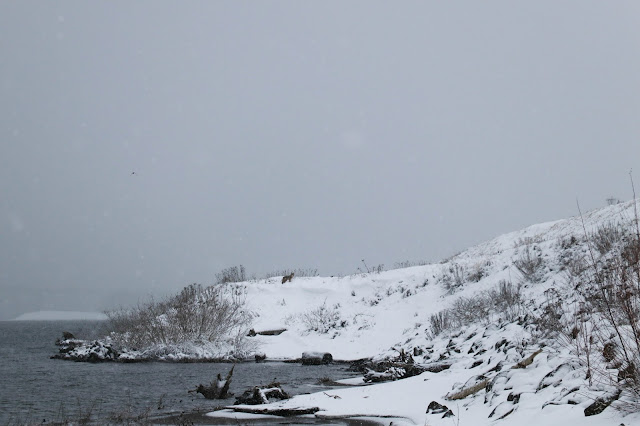 The coyote had also noticed the owl.  The owl hopped down and vanished from sight, but was obviously still in the same area.  The coyote crept up close and boom, the owl flushed from its roost. 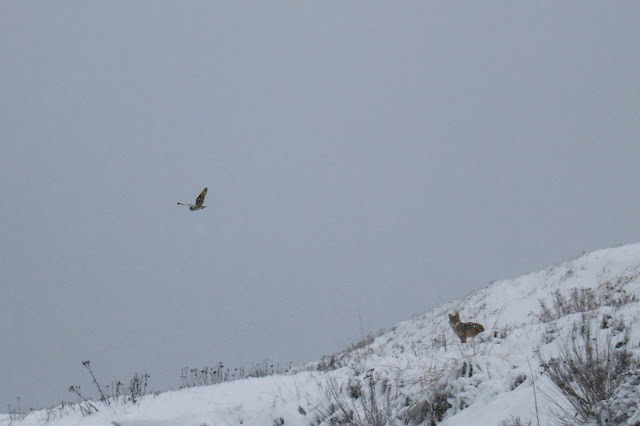 We thought that was the end of it but then the owl turned around and took a couple dives at the coyote.  Such a badass. 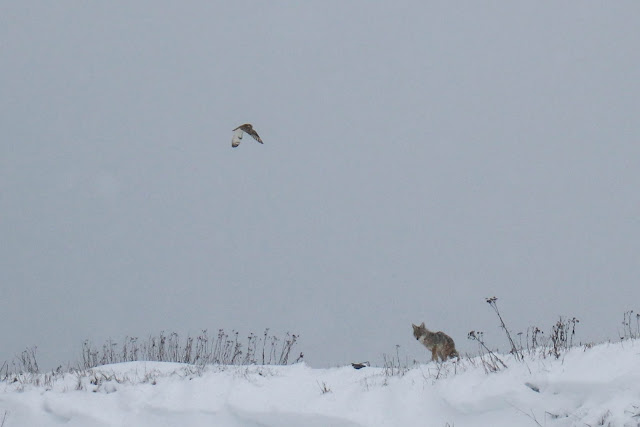 The coyote had become more concerned with us by then, and trotted off towards the bike path.  We kept going hoping for another owl glimpse, which we got when I accidentally flushed it. 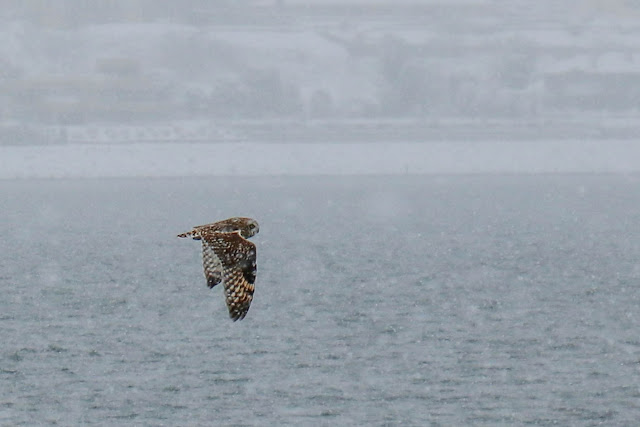 The owl flew east right into the path of a Peregrine and a brief scuffle ensued, ending with the owl flying back west past us. 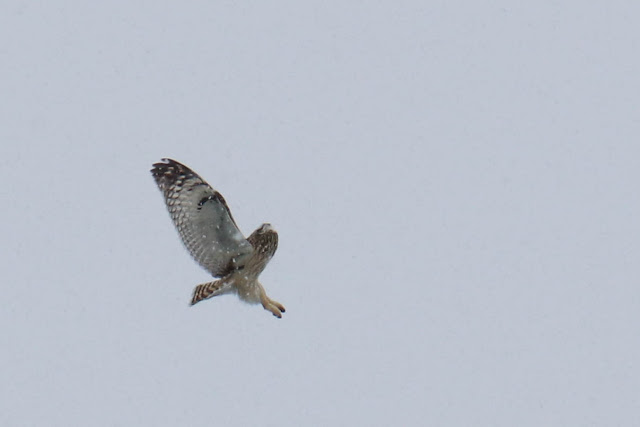 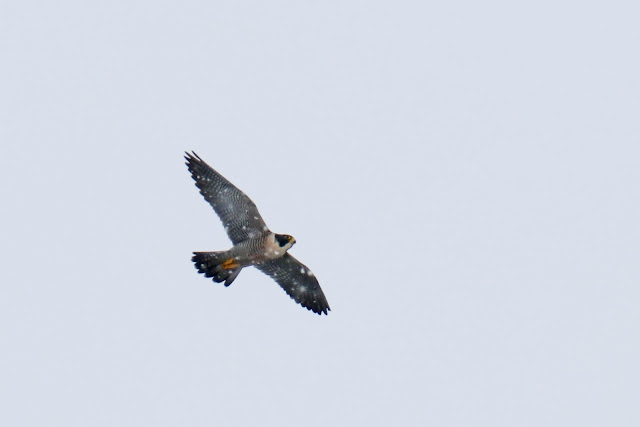 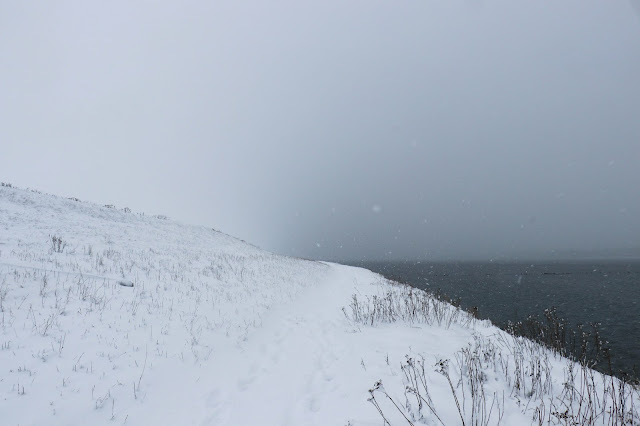 We turned around soon after and did everything we could to not flush the owl again.  But it flew anyway. 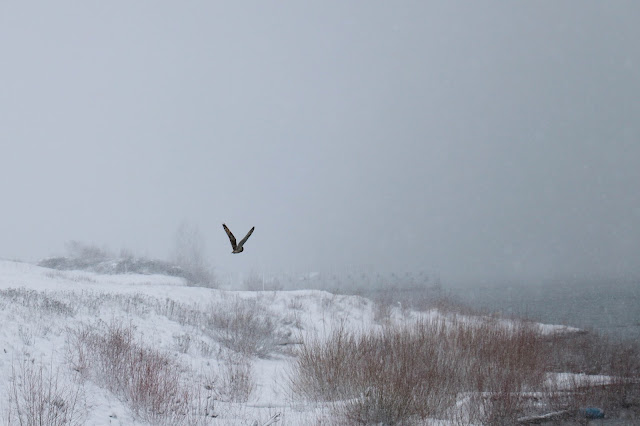 A second one erupted from the rocks that we had no idea was even there.  Argh.  We carried on, enjoying the snowy landscape. 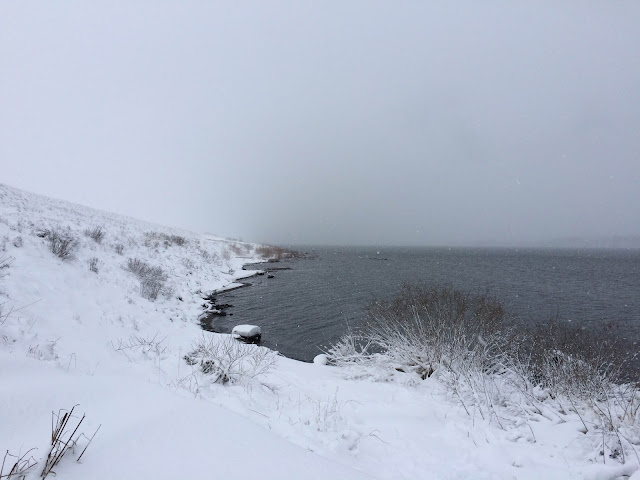 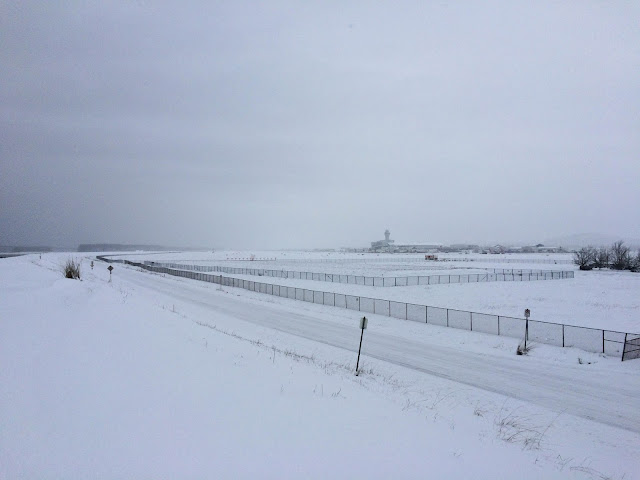 We explored all the way to the end of the parking lot and found more good birds like a Lincoln's Sparrow, a cowbird, and a pair of Downys.  I tripped over a rock in the only place not covered in snow and faceplanted onto the beach. 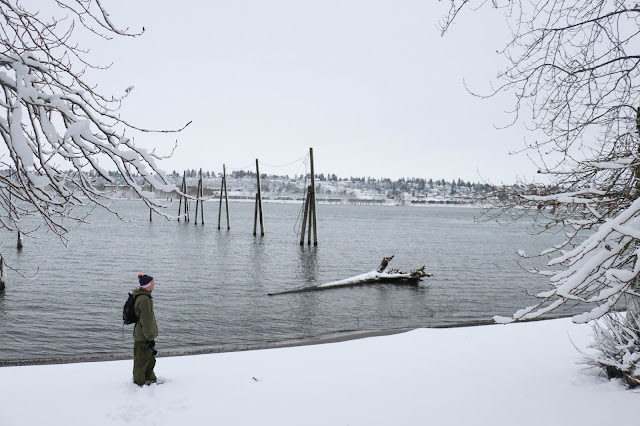 This kind person did not even laugh at me.

After Broughton Beach we searched for food and then continued our snow day fun day with some sledding at Glendoveer Golf Course.  On one of my last walks up the hill a Golden-crowned Kinglet appeared out of nowhere and landed on the snow in front of me.  It was magical.  A perfect snow day.

Yesterday the snow was still here and it was about 25° outside.  This did not stop me from finally shoveling out my car and braving the ridiculous road conditions to look for a reported Bohemian Waxwing at Mount Tabor. 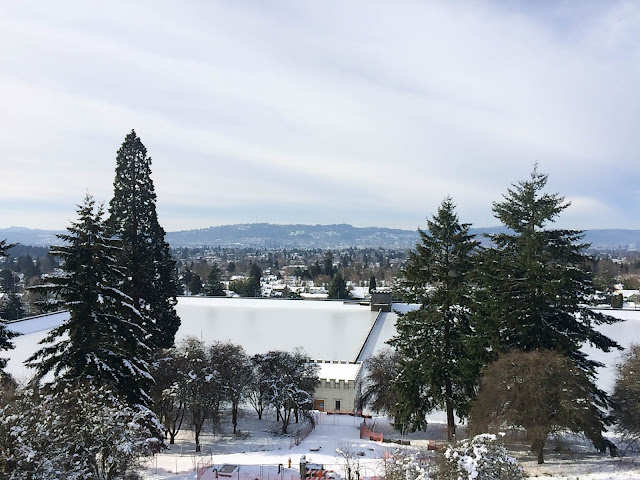 I headed straight for the hawthorne trees where I correctly assumed the birds were hanging out.  Among hundreds and hundreds of robins were at least a hundred Cedar Waxwings.  The birds were using every tree along that side of the reservoir and I knew the hunt for the BOWA might take awhile. 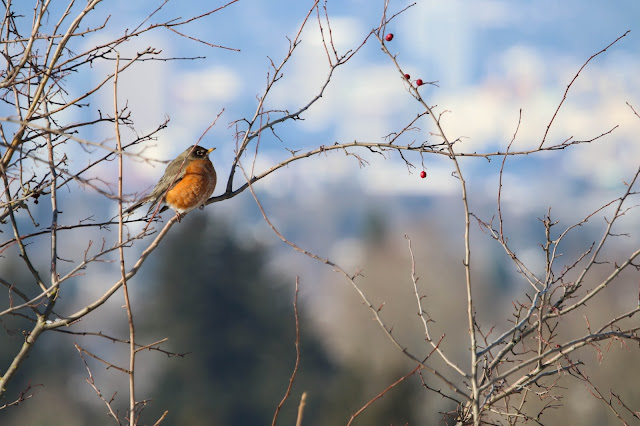 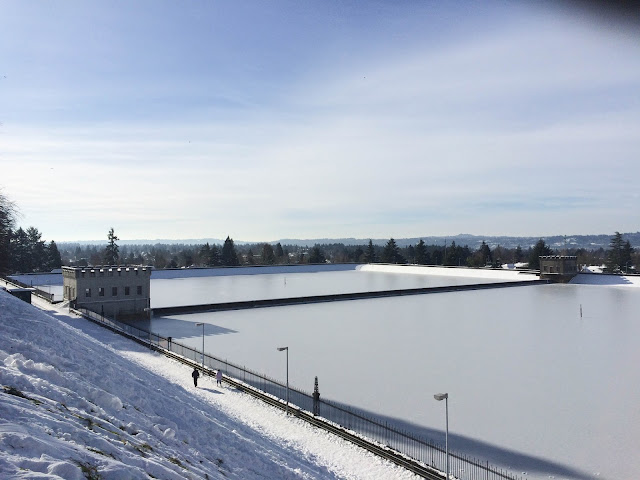 The frozen reservoirs looked so cool. 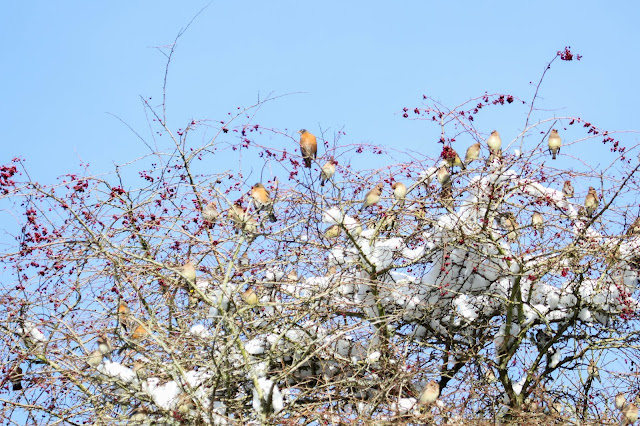 About an hour into my search I decided I liked searching this tree and the ones near it because it meant I got sun on me to keep me warm.  Then I noticed one of the waxwings looked gray and shot off a few photos. 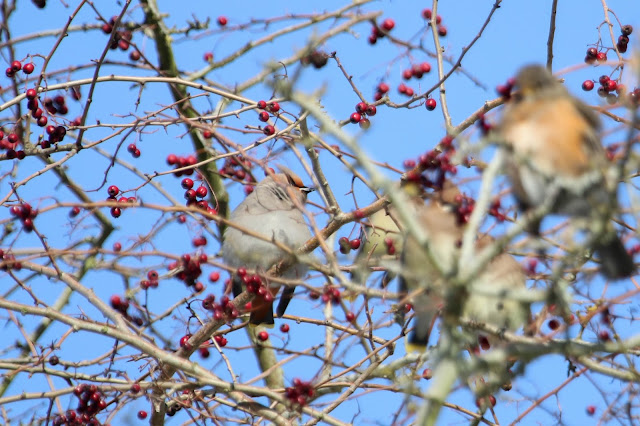 Look!  A Bohemian Waxwing!  ...is what I should have said.  Instead I looked down at the camera screen (in bright sunlight) and thought, that undertail isn't red.  I looked up and the bird was gone.  I decided to keep searching.  Dummy. 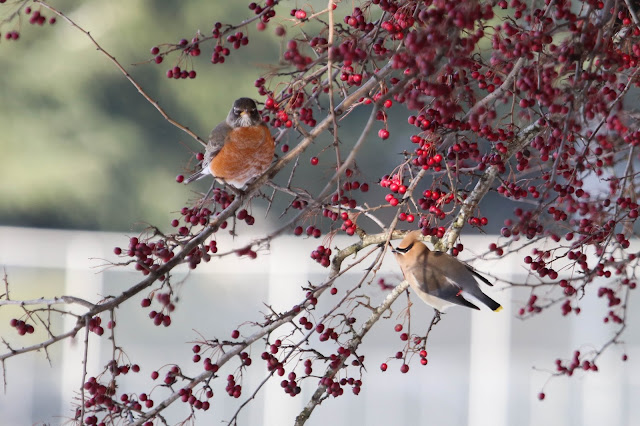 Forty-five minutes later I had found another sunny spot to stand in and noticed the waxwings were all flying up to the conifers nearby.  I scanned and scanned and boom, found it! 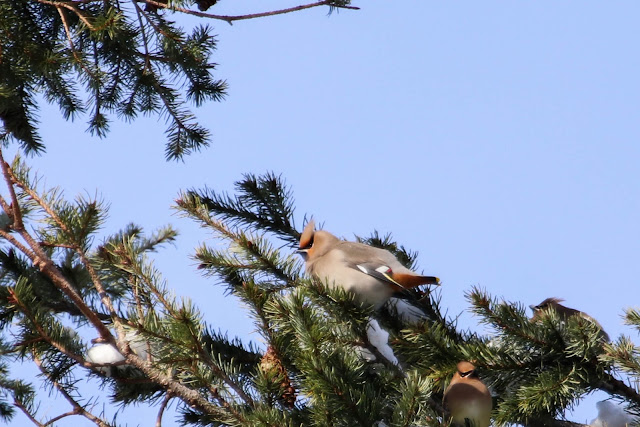 County bird!  Year bird!  5MR bird!  Woohoo!   Worth the sketchy drive for sure.  The day turned out to be a pretty great Friday the 13th!!!  Good times!!