This song appropriately came on the radio yesterday morning as I drove to work through ice and slush and snow.  Portland had yet another snowstorm followed by yet another ice storm this weekend and it is safe to say we are all OVER IT.  Over tending to frozen hummingbird feeders, to frozen birdbaths, to dogs that can't walk on ice.  Bleh!  Stop!  Oh, what?  There's more snow coming? 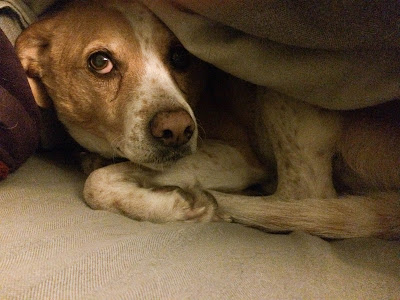 Wah.  Last week I broke down and purchased a heated bird bath dish for the first time and it has proven to be a huge hit with my yard birds.  Photos from last week: 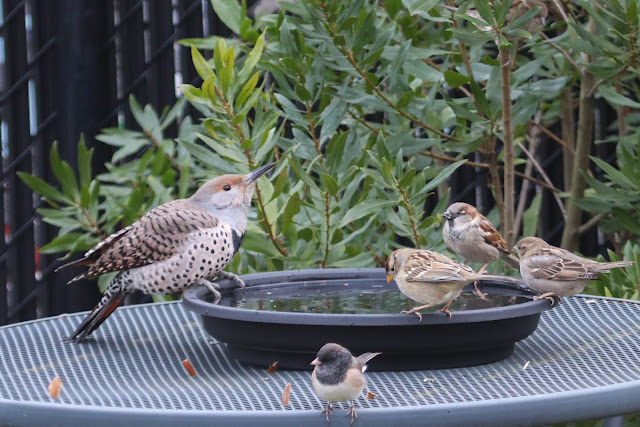 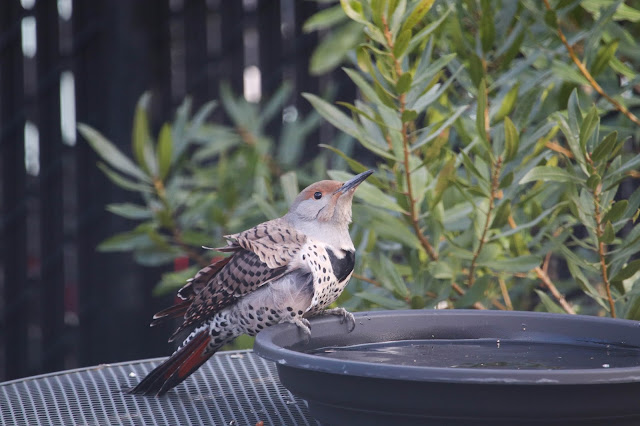 Did I mention the east winds have been crazy also? 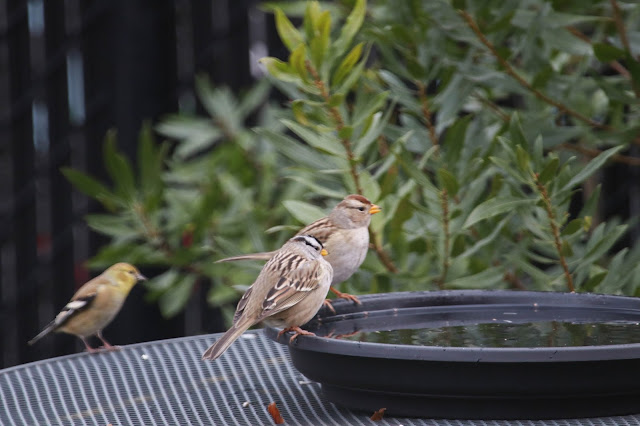 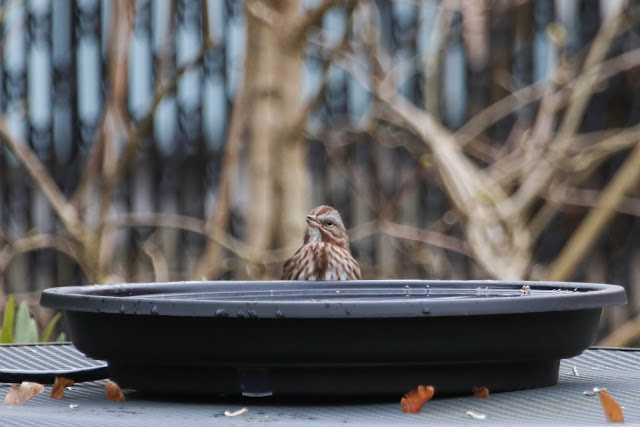 Song Sparrow does not like perching on rim, but will lean over and drink 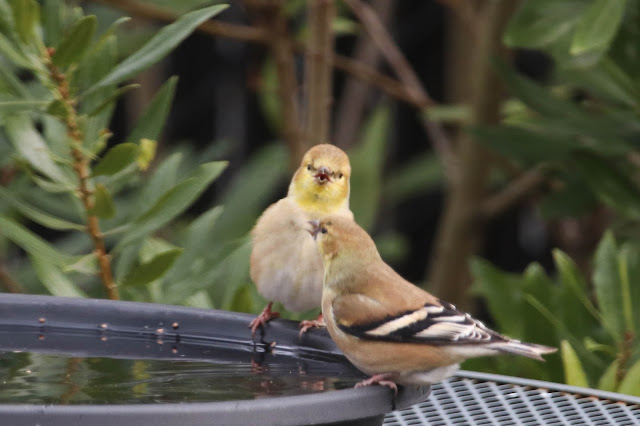 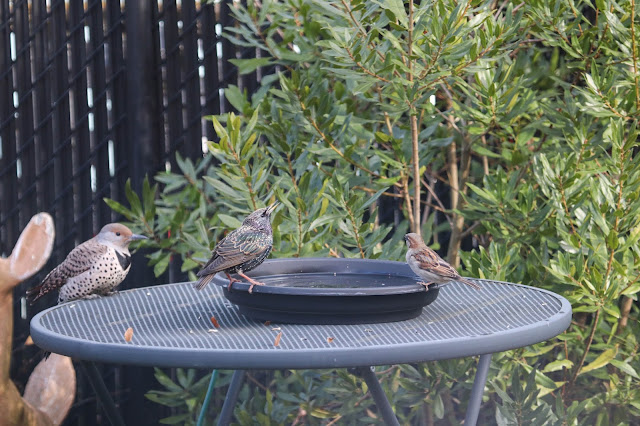 Flicker about to kick out the non-natives 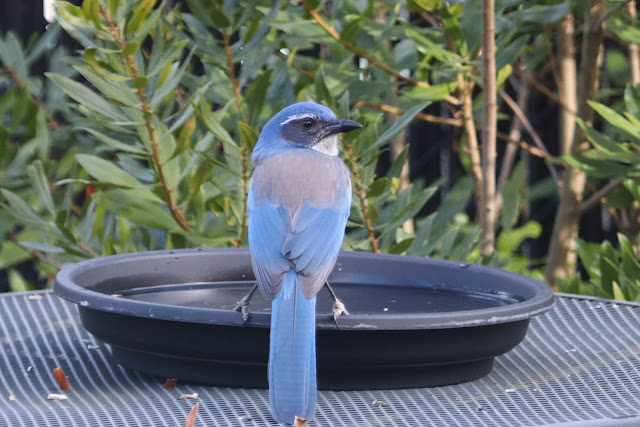 On Saturday as the snow was beginning I heard from Sarah that a Black-throated Blue Warbler was visiting a suet feeder in SW Portland.  I was not over eager to leave my house, but I was over eager for such a good-looking state bird, so off I went.  I arrived at the house and found a few birders already standing there, and the bird appeared quickly.  I took a few terrible photos. 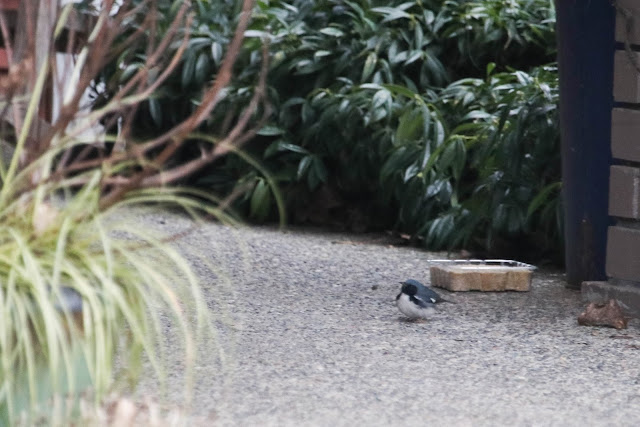 It went back into hiding and appeared briefly again about fifteen minutes later.  After that I decided I was cold (it was about 27°) and should head back home before the snow got worse.  Such a great bird and in my 10-mile radius (heh)!

Sunday morning the ice storm hit, work was cancelled, and I had the whole day to put around the house in my pajamas.  Before they got coated in ice I took a few shots of the rat tracks all over the driveway. 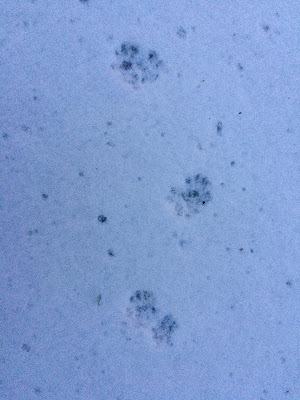 I gave Jay a few extra peanuts out of pity. 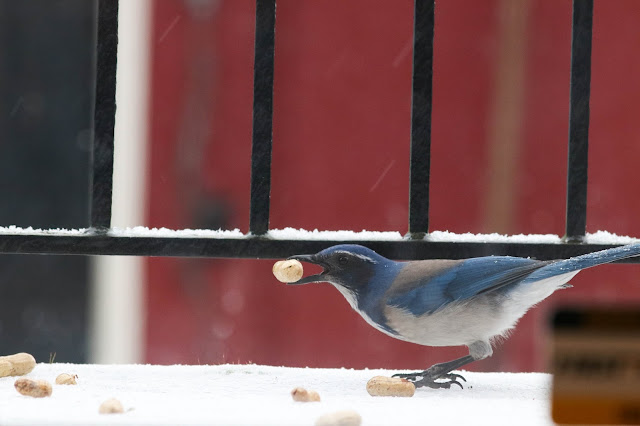 My front and side windows acquired a thick coating of ice which made it difficult to watch my window hummingbird feeder. 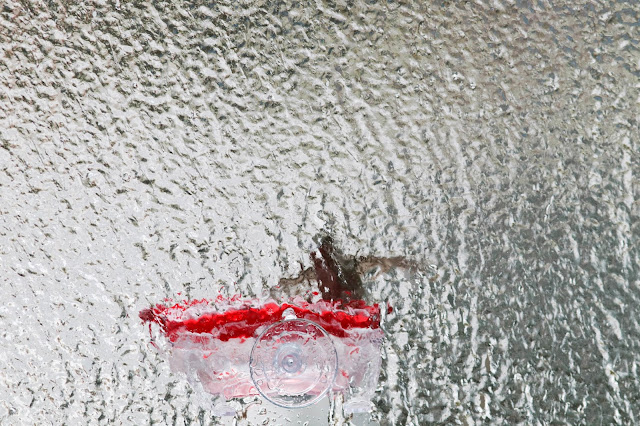 Yesterday morning I expected to wake to the ice all melted and things much better.  This was not the case.  Anything that had melted slightly the evening before had refrozen thicker and heavier.  My dogwood sagged, my wax myrtle dipped over into the heated bird bath, and the camellia will probably never be the same. 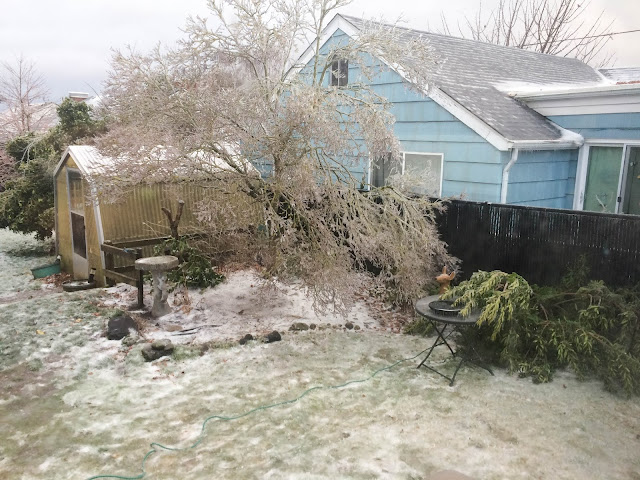 But it was pretty!  I took a bunch of photos before leaving for work. 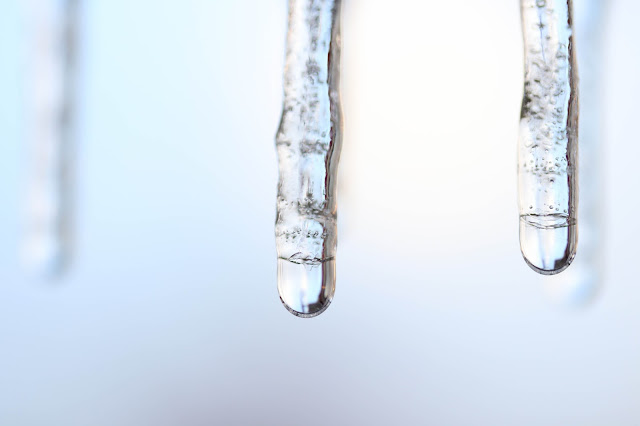 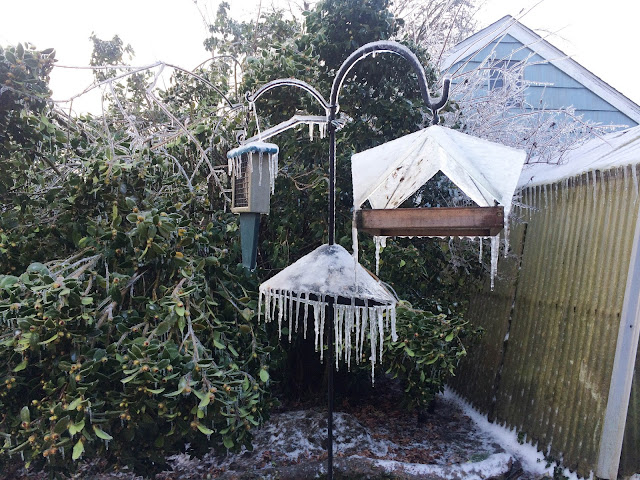 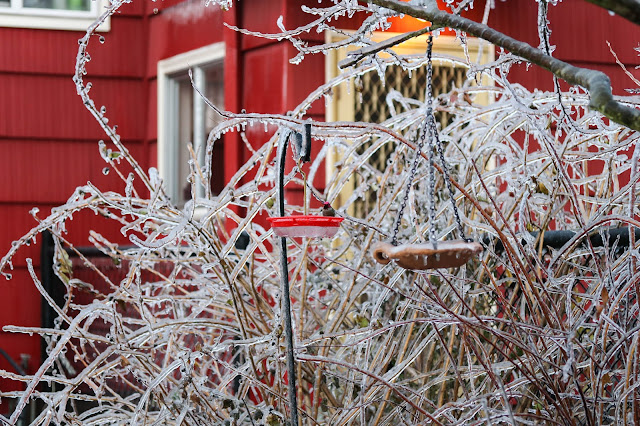 Happy hummer in the ice maze 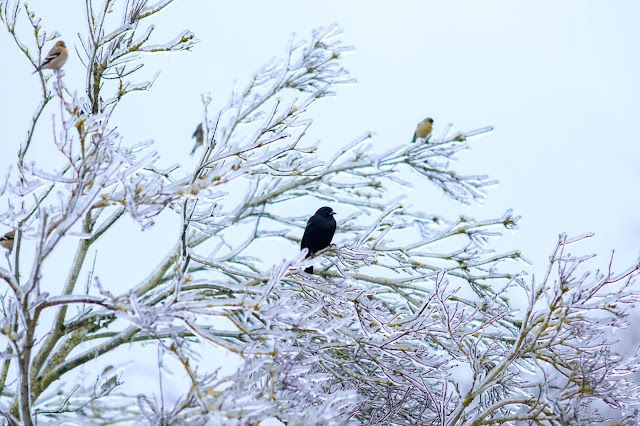 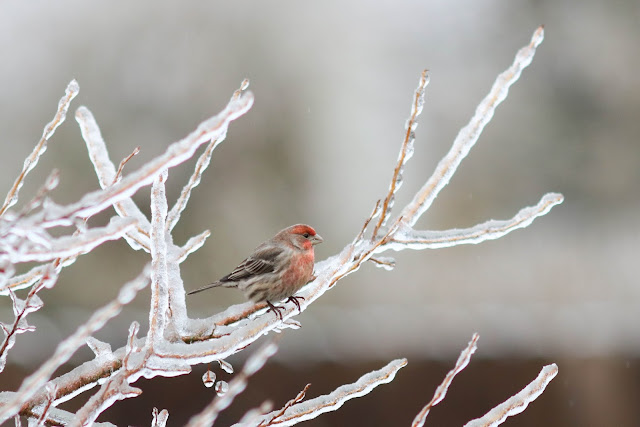 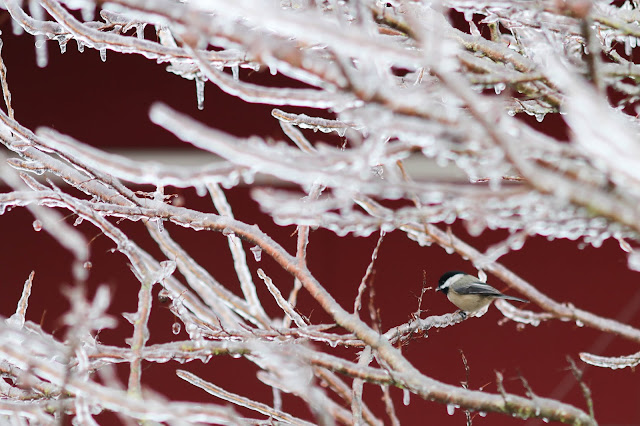 Okay, geez, that's a lot of yard birds for you to tolerate, but I saved the best for last: 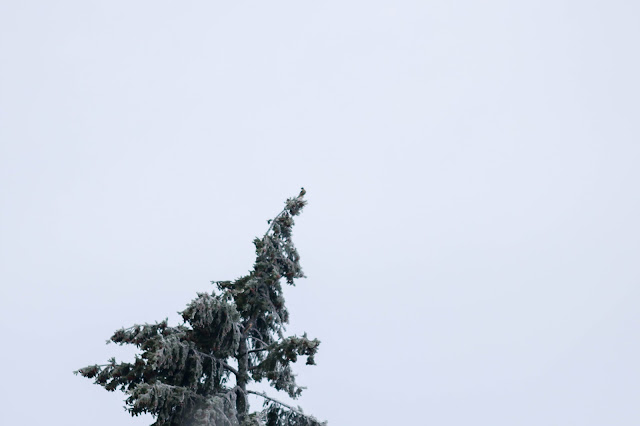 Hell yeah!  A Merlin flew in to it's favorite neighborhood perch, this super tall tree that I am guessing is a doug fir.  Year bird! 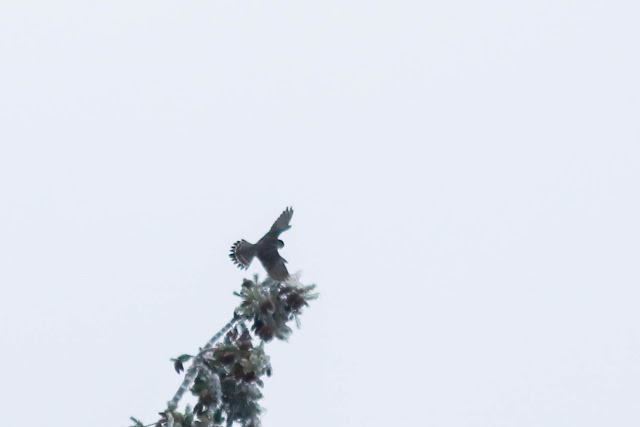