Last weekend Jacob and I took a road trip to central Oregon and spent four days birding and exploring.  We began with a snowy drive over Mount Hood, then descended into the sunny and drier side of the state where wildflowers were hard to resist. 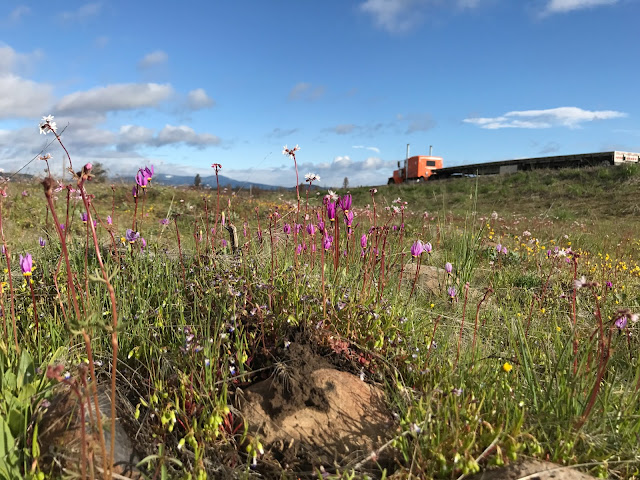 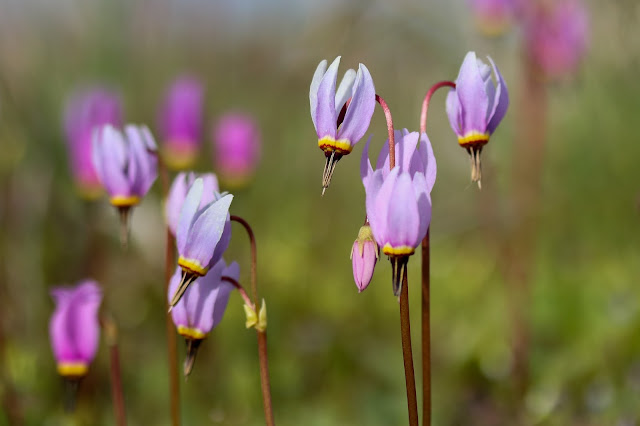 All the shooting stars I could ever want

We made a stop at Smith Rock for White-throated Swifts and found bonus marmots and a Townsend's Solitaire.  A Black-billed Magpie is all I have to share from there. 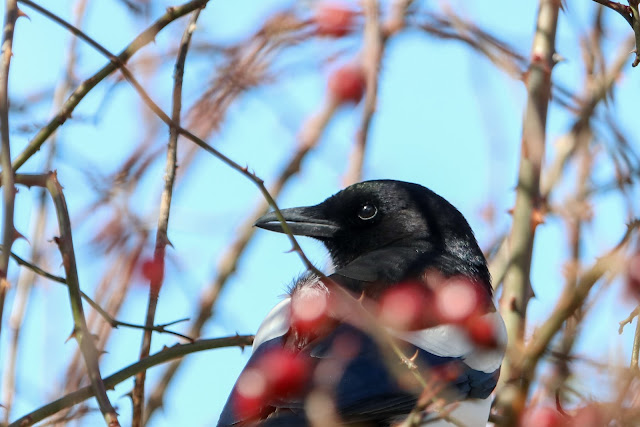 Our first big birding stop was in Sisters where we visited the Best Western, Trinity Way, forest roads off of 242, and Calliope Crossing.  It went from sunny to crazy snow and back to sunny while we were there. 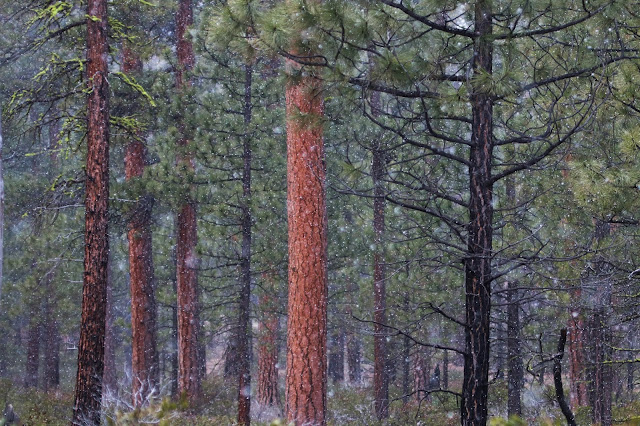 Jacob found his lifer White-headed Woodpeckers in the snow. 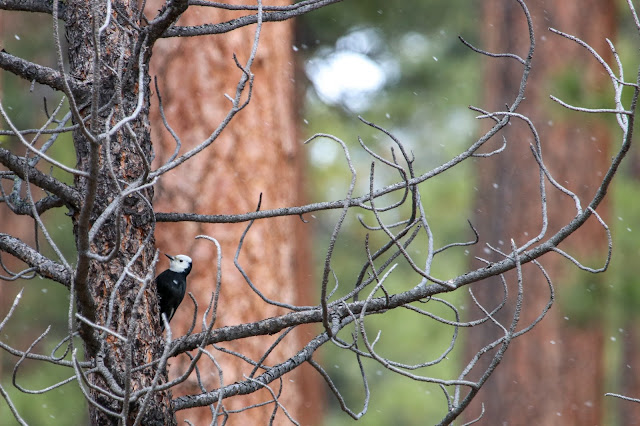 Along Trinity Way we stopped when we heard a bunch of birds including Evening Grosbeaks, Pgymy Nuthatches and Cassin's Finches. 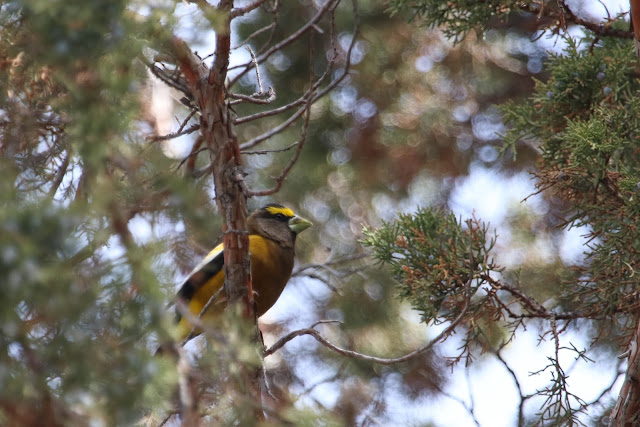 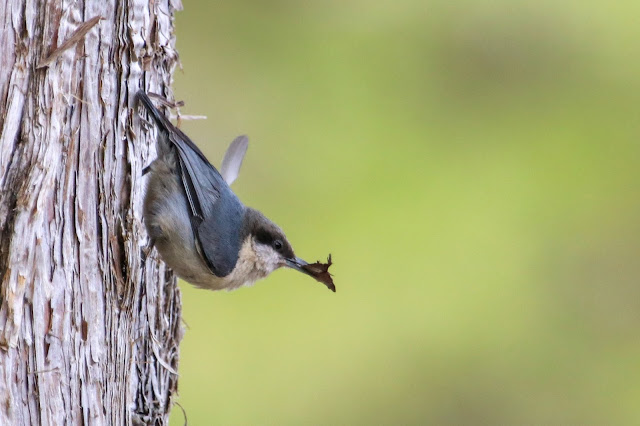 A Western gray squirrel was digging around by the high school while we looked for Pinyon Jays. 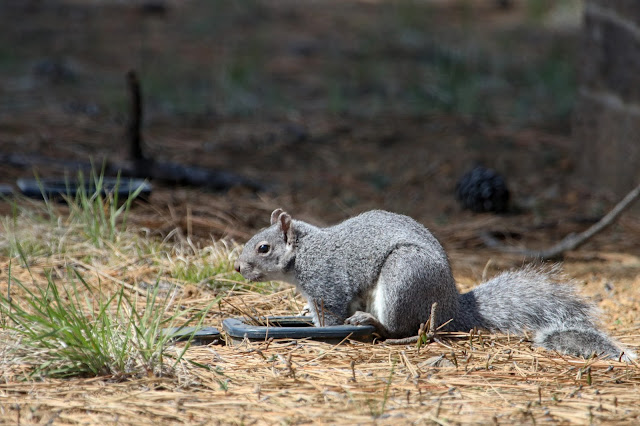 At Calliope Crossing we failed to find any pure Red-naped Sapsuckers, only this hybrid: 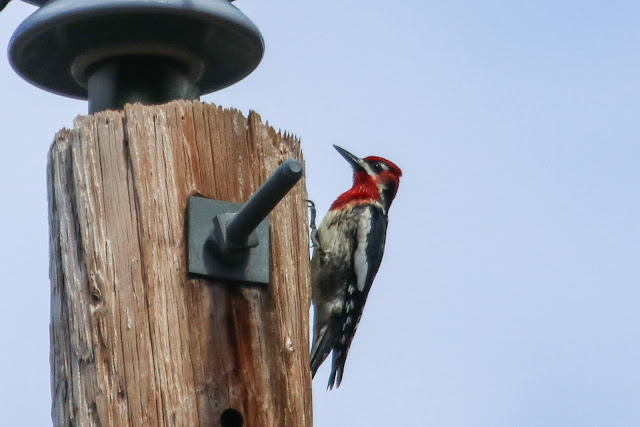 From Sisters we drove south to find our Airbnb, a small cabin near Sunriver.  The next morning it was a balmy 19° as we made our way towards Cabin Lake.  We stopped for elk, coyotes, and shiny frosty plants that looked like they were sporting Christmas lights. 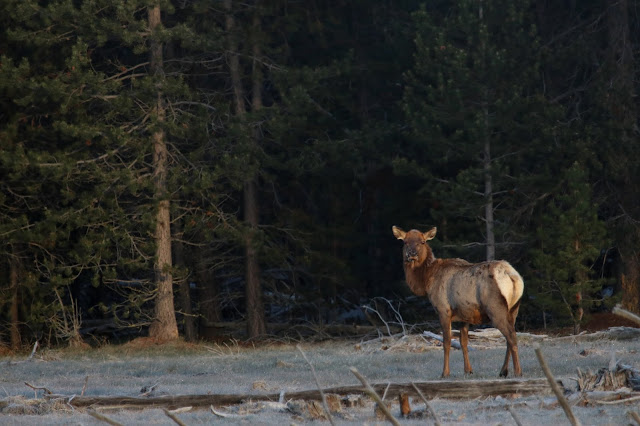 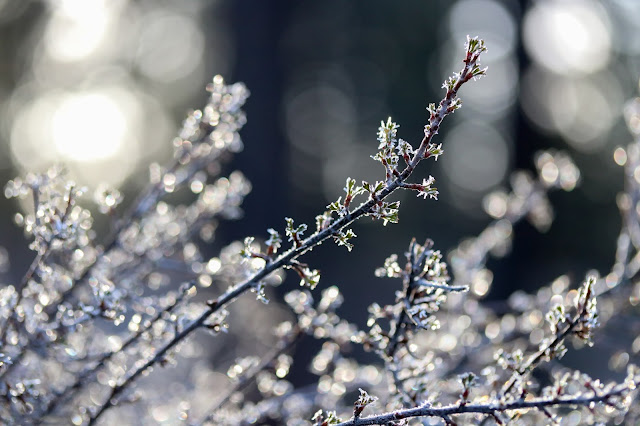 We had tried to take a more scenic route to Cabin Lake but had to turn around when the snow got too deep and take the more heavily traveled route past Fort Rock.  When we changed course in La Pine we found a pair of Red Crossbills drinking from the only part of a little watering hole that was not frozen. 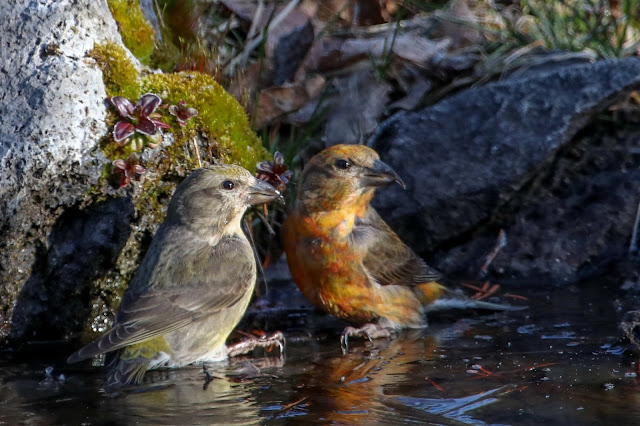 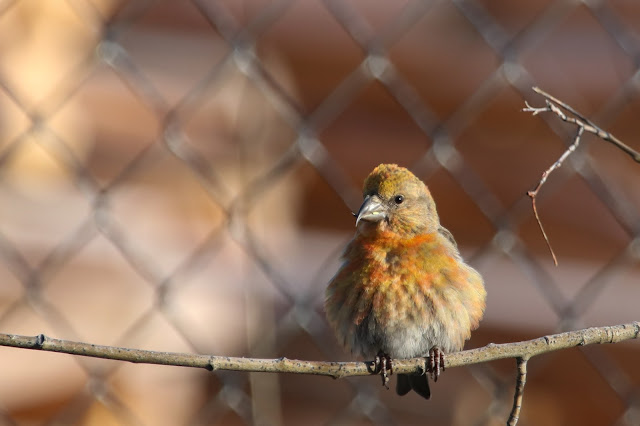 The road went from forest to open sagebrush and we began seeing some sage species near Fort Rock. 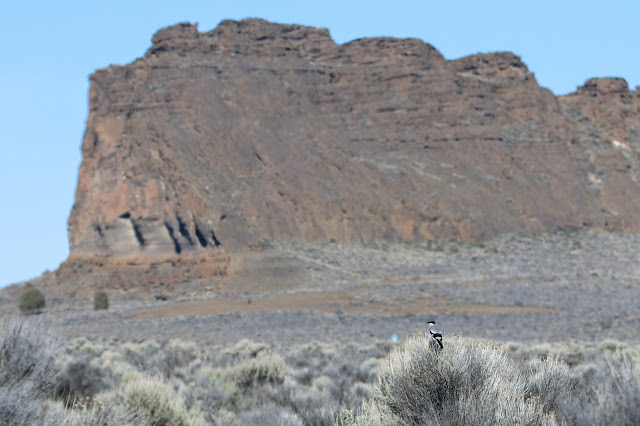 We had Sagebrush Sparrows, Sage Thrashers, Prairie Falcons, and all the usuals.  Most were not interested in perching in decent light for photos. 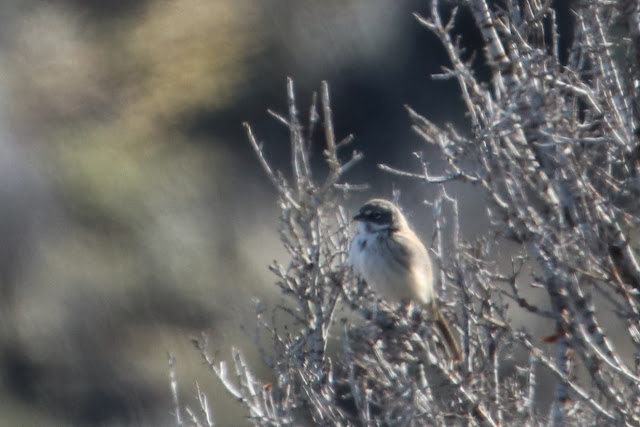 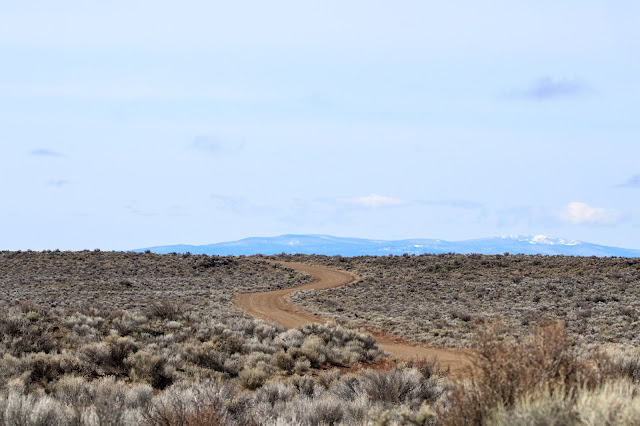 We eventually made it to the Cabin Lake bird blinds where we put out some suet and water in hopes something would show up.  All we got was this golden-mantled ground-squirrel that wanted our potato chips. 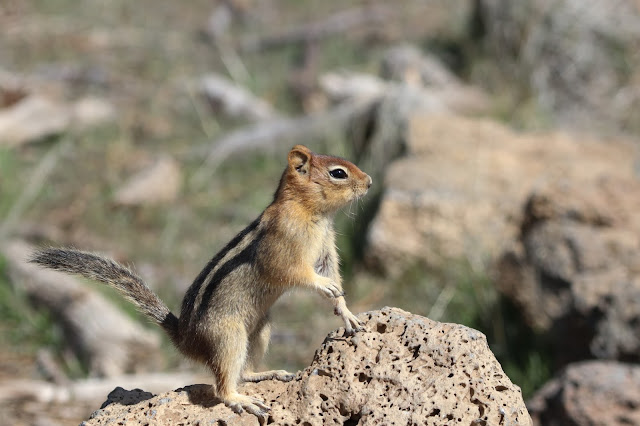 We decided to walk around the area and found some good birds, like Jacob's nemesis Merlin: 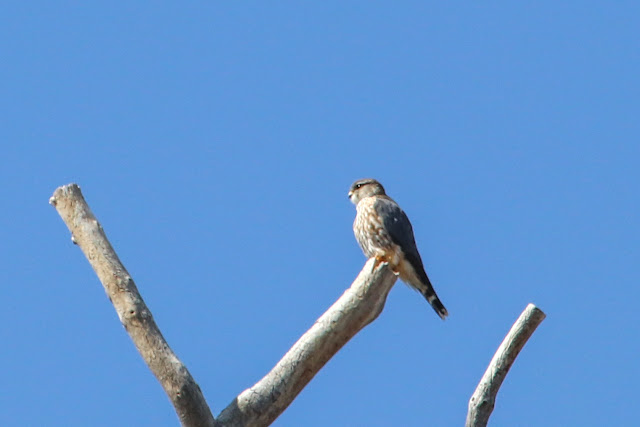 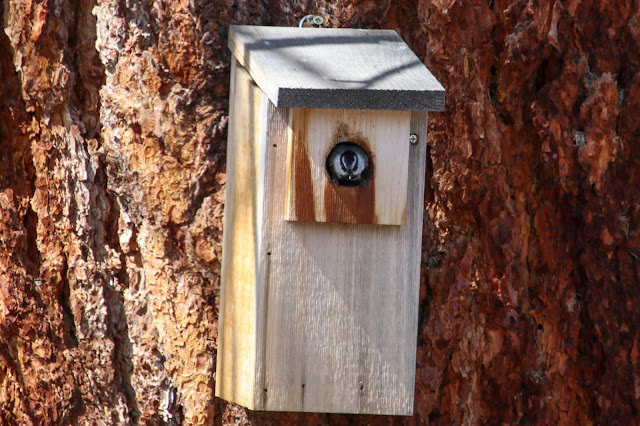 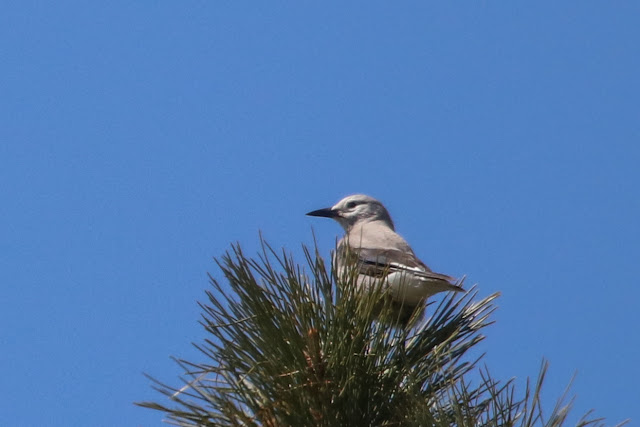 There was also a large flock of Pinyon Jays, Mountain Bluebirds, White-headed Woodpeckers, Pgymy Nuthatches, and other usual birds around.

I'm going to save the rest for the next post.  Good times!!! 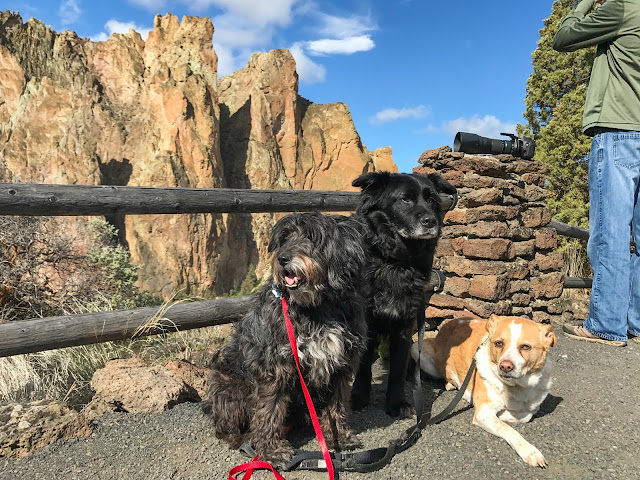