Saturday afternoon Jacob and I went back to our cabin to pick up the dogs and take them for a great walk in the Deschutes National Forest.  We followed a tapping sound to a Black-backed Woodpecker and heard our only (!) Red-breasted Nuthatch of the trip.  The dogs had a good time too. 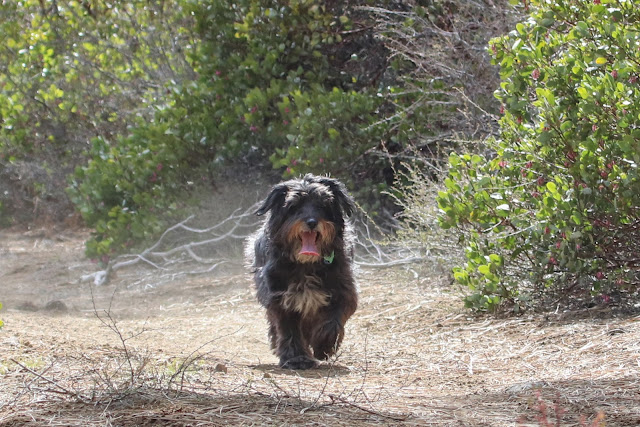 Rexi on the go.

That evening we decided to catch the sunset by a big open field with a view of Mount Bachelor and the Three Sisters.  Swallows and ducks kept the skies interesting. 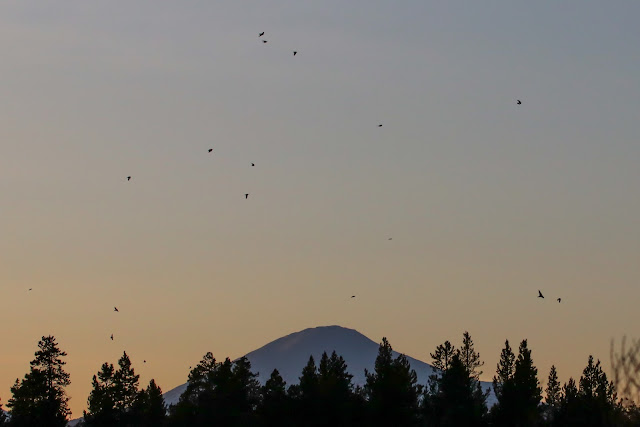 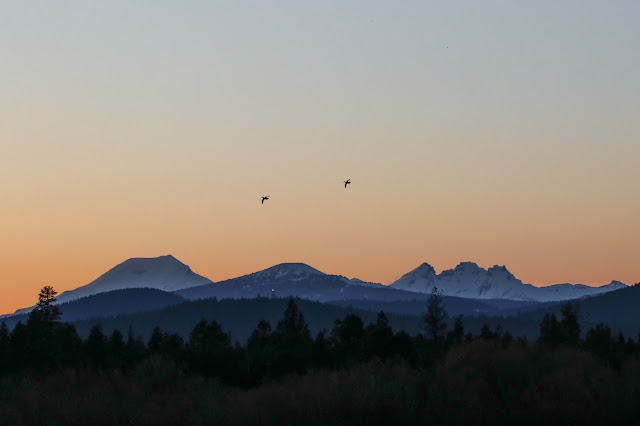 The next morning we woke early to head to the Greater Sage-Grouse lek near Bend.  There were a couple other groups of people there, none of whom wanted to stay in their cars as suggested by the sign nearby.  The four displaying grouse stayed to the far side of the fence so I did not bother trying for photos. Still cool to see.

It was pretty chilly and we decided to drive around and explore the area south of there, taking random forest roads.  I got out to pee in the tallest sagebrush I could find (not tall enough) and kept finding this poop. 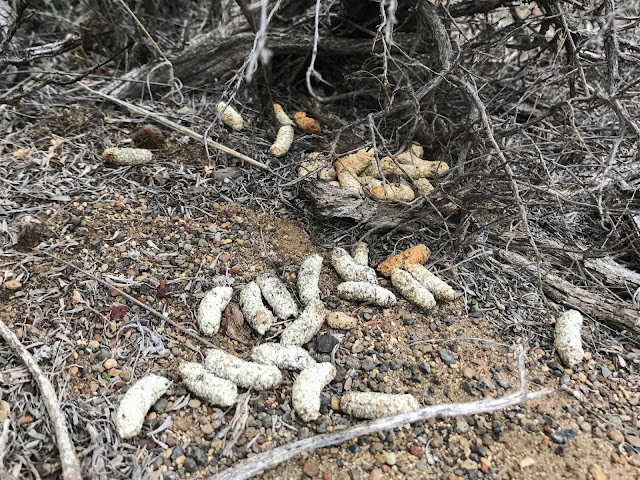 I finally looked it up and it's grouse poop!  So much cooler than anything I had come up with.

Along one of the forest roads we noticed a freshly-killed chipmunk on a stump and wondered what predator we had spooked from it. 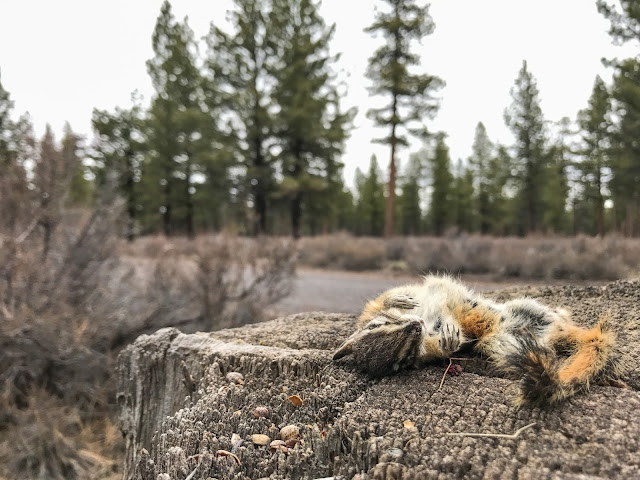 In the denser part of the forest we heard a couple of Townsend's Solitaires calling back and forth and one even flew in to a branch right next to the car. 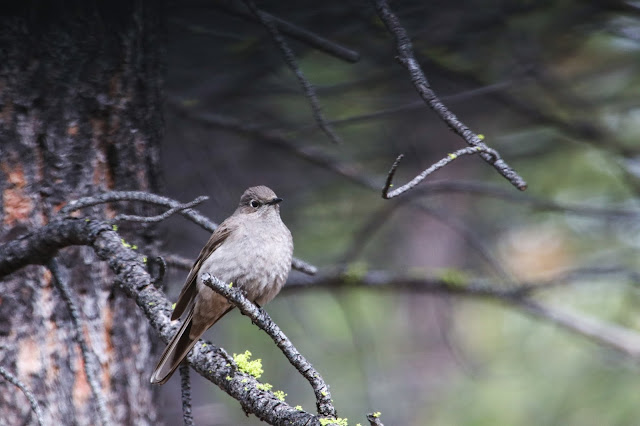 At one point we took a random turn-off and began to hear tapping.  We got out to investigate and eventually located a couple of Williamson's Sapsuckers and a Hairy Woodpecker. 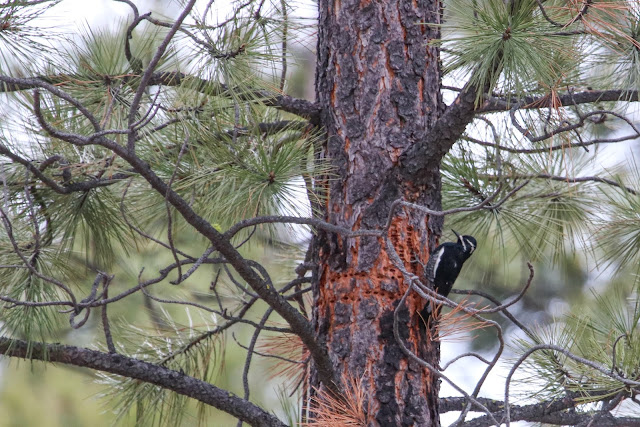 We followed a sign for Skeleton Cave and took the dogs out for a walk at the end of the road. 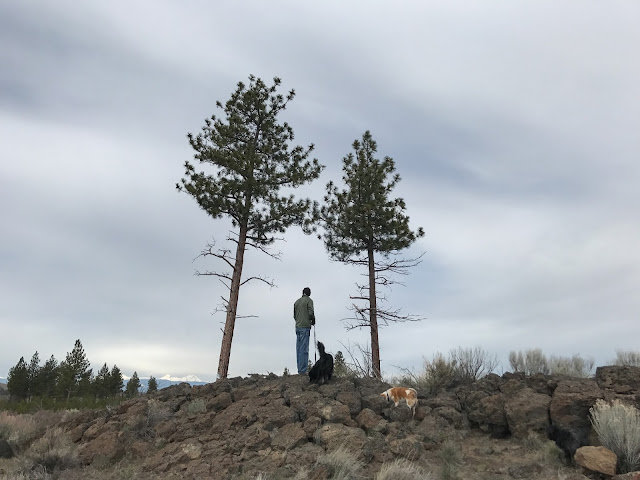 The mountain views were decent. 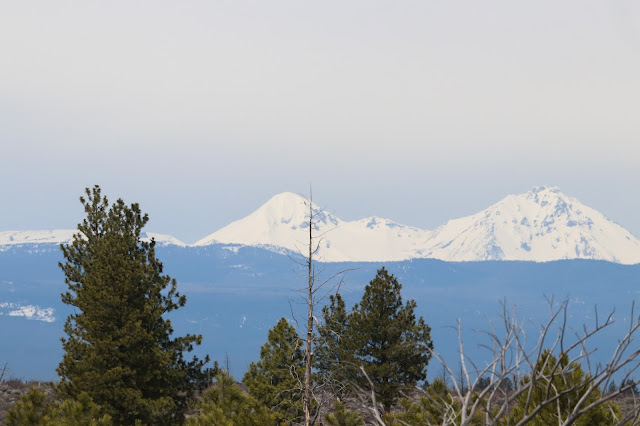 This was a pretty fun area to explore, though I was starting to get hangry and we returned to Sunriver so I could stuff my face with pizza.  The next morning we packed up our stuff and began the long and scenic journey home.  I suggested a side road to look for good views of a Swainson's Hawk and instead we found a Ferruginous immediately. 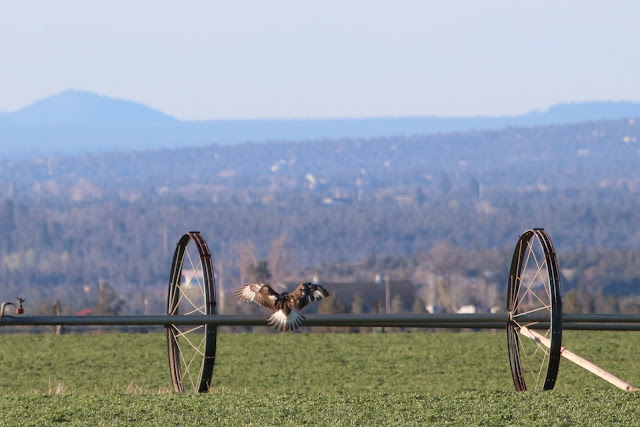 We continued on to another side road that led past this rando fake-looking horse. 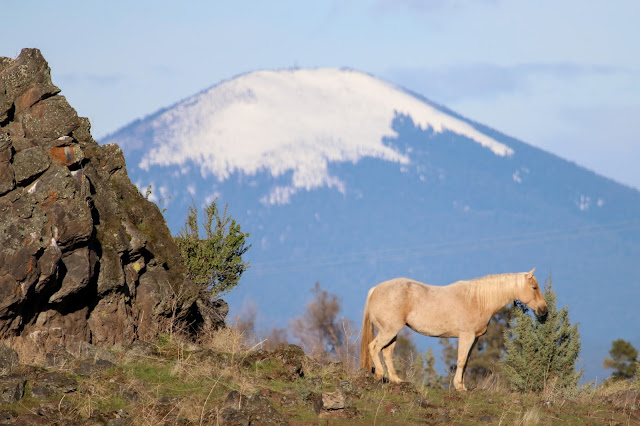 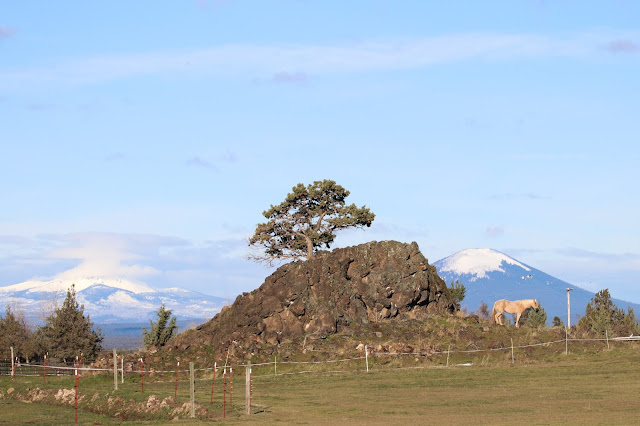 The road passed farmland and turned into open sage where we started finding tons of White-crowned Sparrows along with Vesper, Savannah, and Brewer's.  We finally found the Swainson's Hawks we had been hoping for. 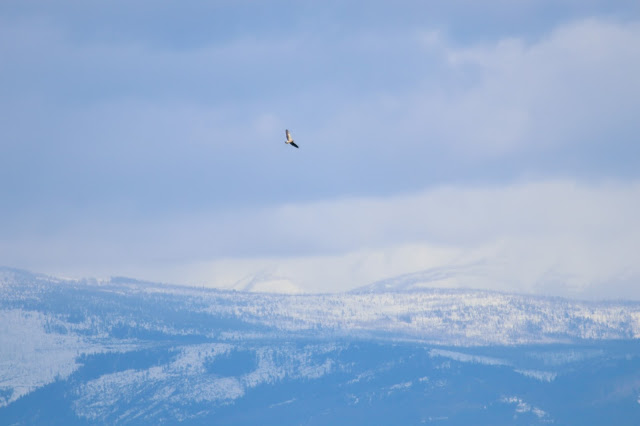 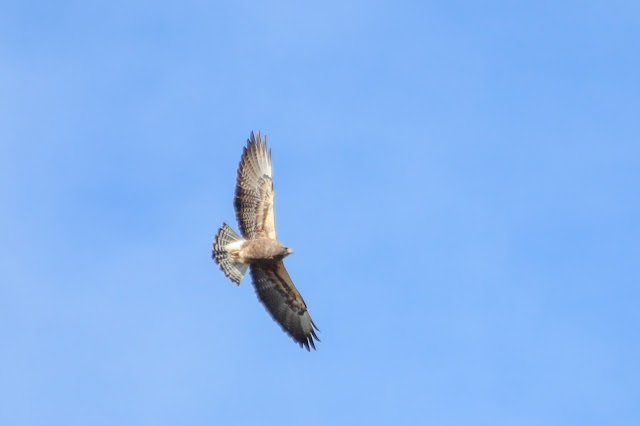 Up the road we found one perched next to a nest: 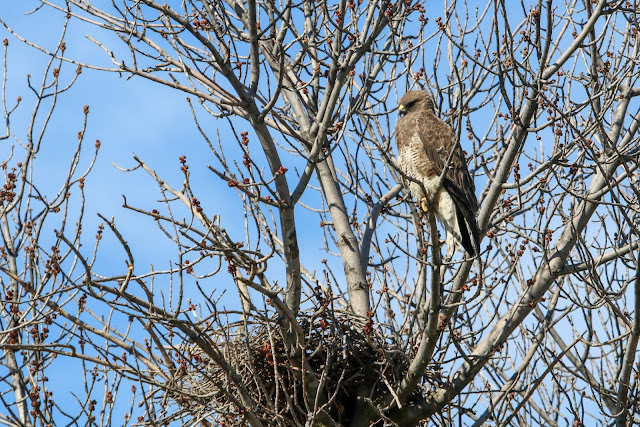 We got back on 97 to head north to 197, passing through Maupin and into Wasco County to look for Tricolored Blackbirds.  My "reliable" spots were fails, but we found another location on eBird called Oak Springs Road.  Success. 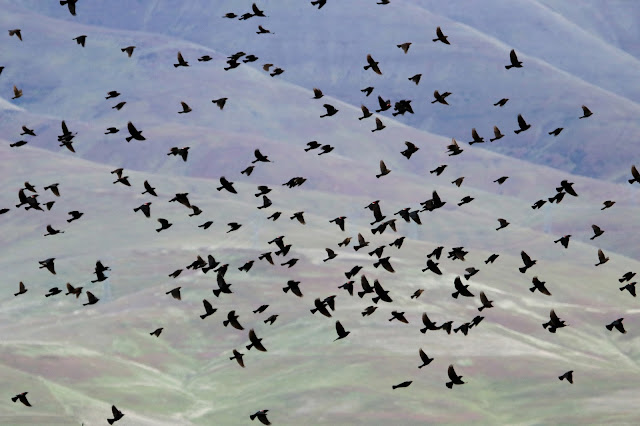 They were mixed up with Brewer's Blackbirds. 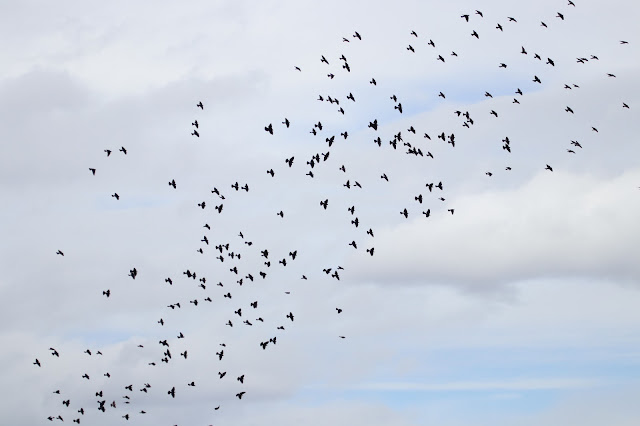 When we made it back to 84 we decided to take the scenic route along the historic highway and check the wildflower scene.  Balsamroot was blooming along with larkspur, prairie stars, and tons of stuff I am forgetting. 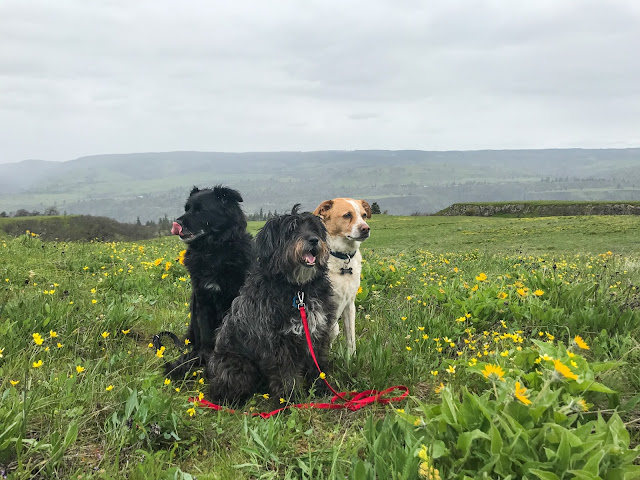 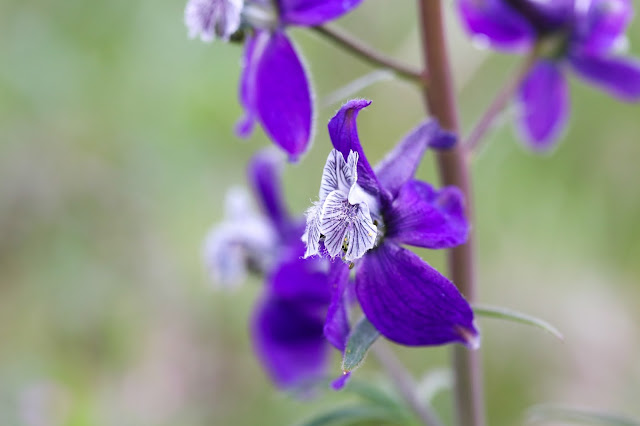 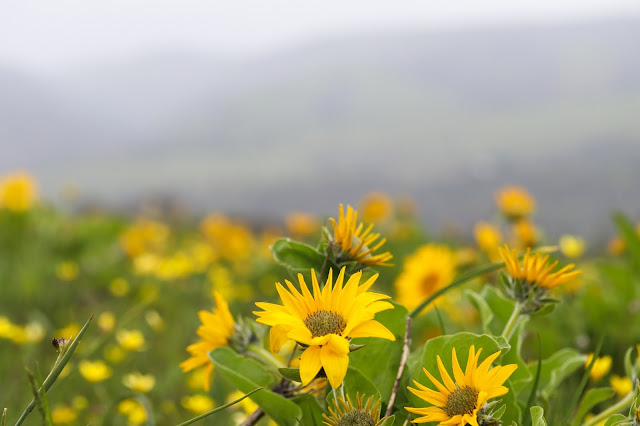 The rain picked up while we were poking flowers so we headed back to Portland after that.  It was a really fun four days with so many birds, amazing scenery, so many boogers, and the best of company.  Good times!!! 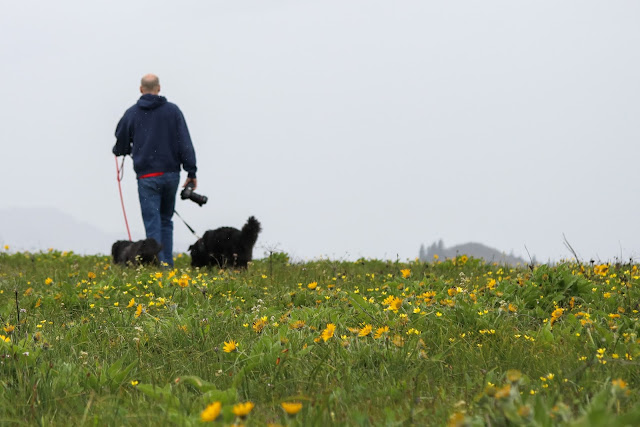