on June 06, 2017
In these parts there are two main mountains that go by the name Larch, neither of which actually host any larch trees.  The more popular mountain is in Multnomah County, where I live, and the other is in Clark County, where Jacob lives.  We visited the top of both mountains recently and let me see if I can make a decent blog post out of those trips.  I'll start with yesterday, when I convinced Jacob to wake up even earlier than he already does so we could get to the Mult-Larch summit by sunrise. 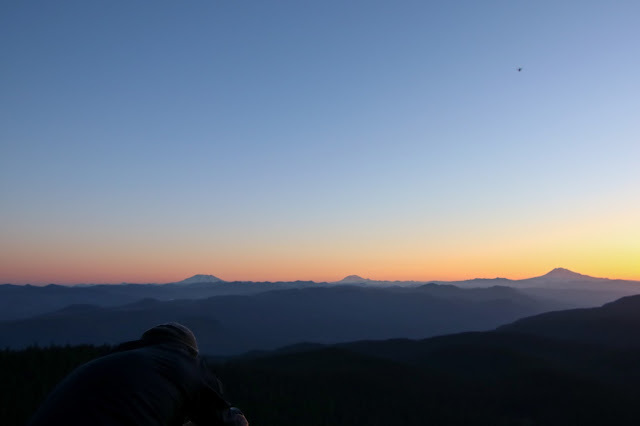 Looks pretty and peaceful, right?  Well check out that dark spot in the top right.  That's an effing drone buzzing around, directed by a pack of eleven loud and annoying douchebags.  Ugh.  Beautiful sunrise though, and I was able to make out the sound of the previously reported Rock Wren downslope. 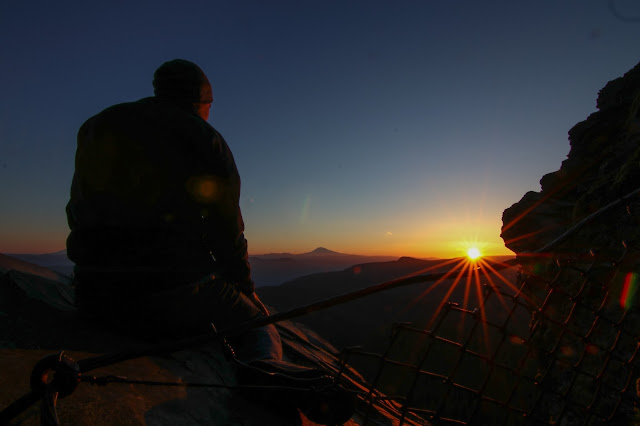 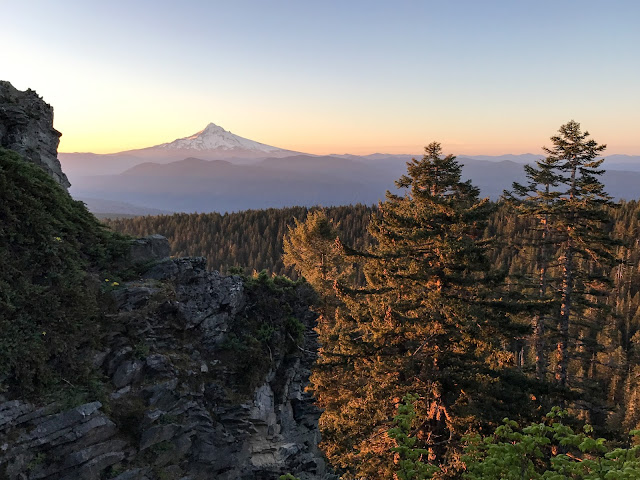 We walked around some areas at the top, looking for birds and flowers, before driving to a clearcut five or so miles down the road.  Despite stopping many times on the way we never heard a Sooty Grouse.  Weird.

The clearcut and the nearby re-planted area turned out to be packed with birds, beginning with a MacGillivray's Warbler. 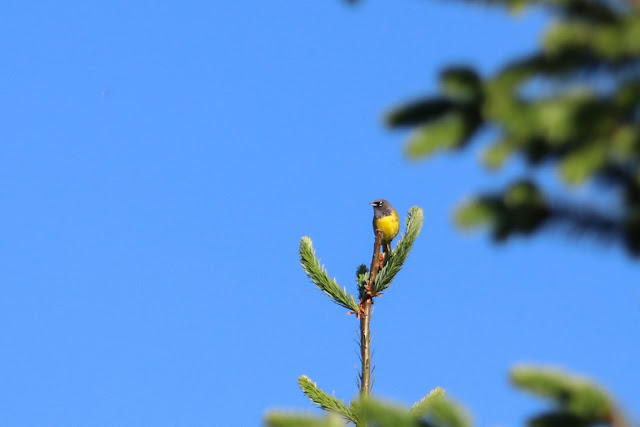 An Orange-crowned lurked nearby, while Willow Flycatchers called from every direction. 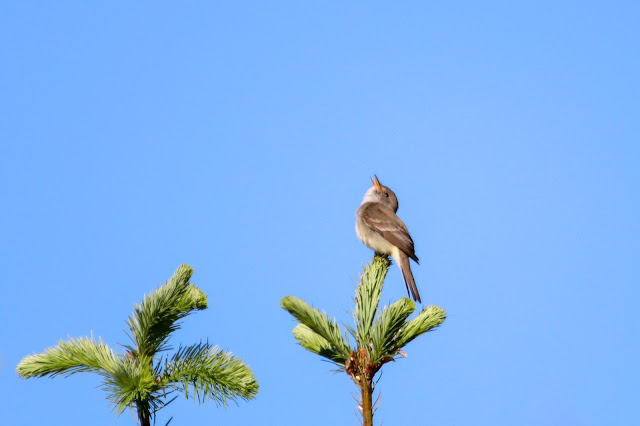 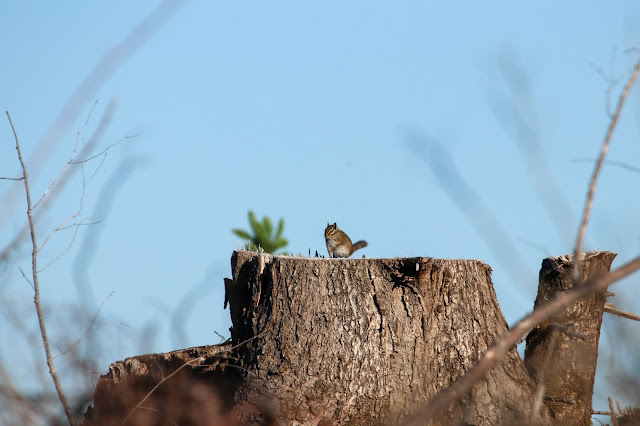 I saw a bulky bird perched on a stump and got hopeful for grouse or quail, but then it took off and flashed a red tail at us. 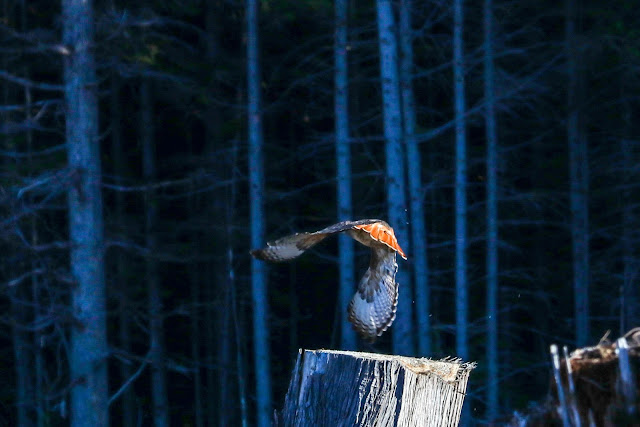 Jacob spotted a bird past the hawk that turned out to be a Townsend's Solitaire.  This is always a nice bird in the county but we were barely able to pay attention to it. 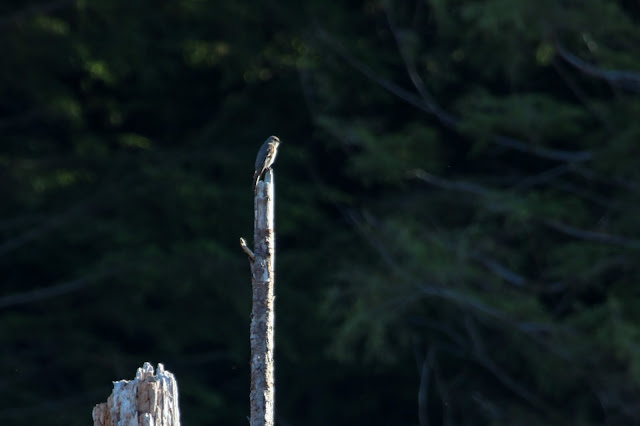 There was something far more distracting going on in the form of a singing Rock Wren.  Considering I only saw my first Rock Wren in the county a few months ago, this is still a very exciting bird.  Yes we heard the one at the top of the mountain, but this was a second bird, one we found on our own, making it more special. 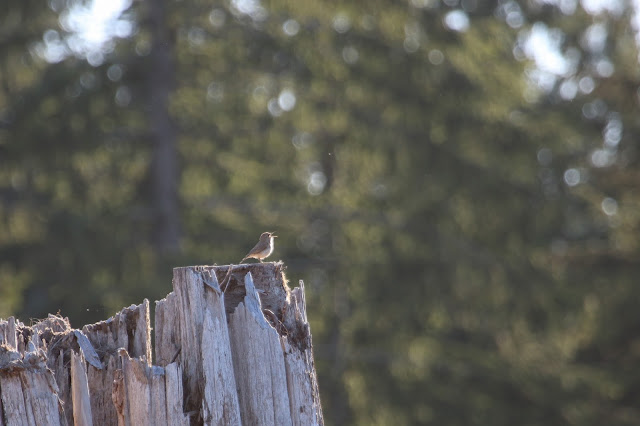 Above is our initial view of the bird singing its heart out though we did not realize until later that just below the bird in the stump was a House Wren nest cavity.  The House Wren and the Rock Wren got into it briefly and the Rock Wren moved on to more photo-friendly perches in the sun. 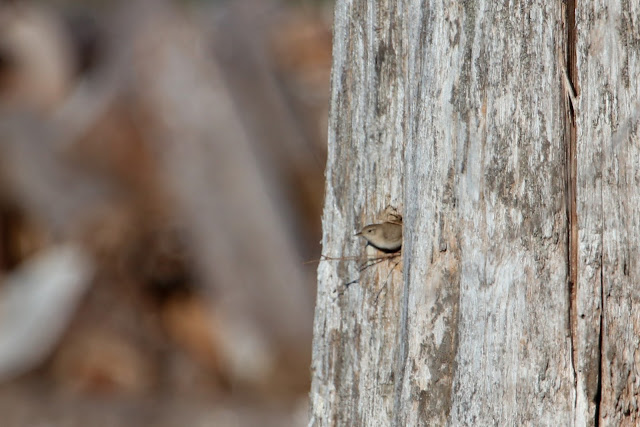 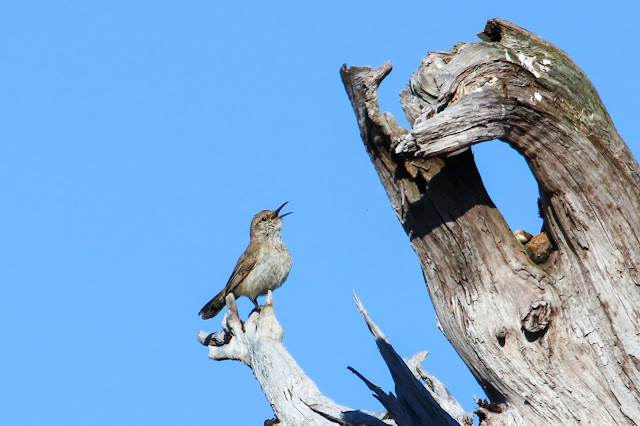 I took a little shaky cell phone video through my binoculars of the bird singing because I love their ridiculous song so much.

We were excited to have a flock of Western Tanagers flying around the stumps and shrubs, bringing some bright yellow to the otherwise brown and dusty landscape. 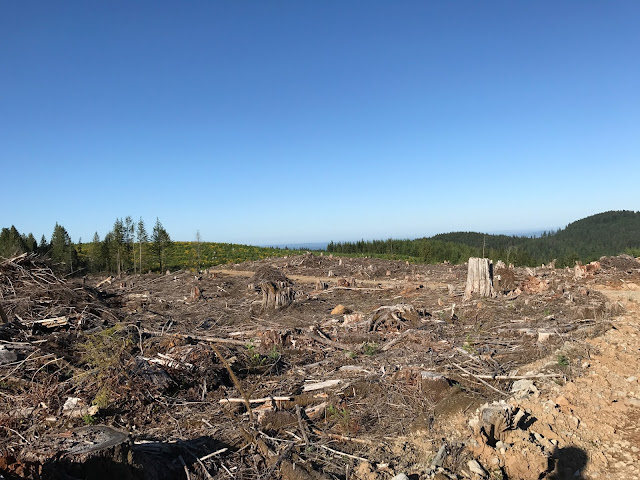 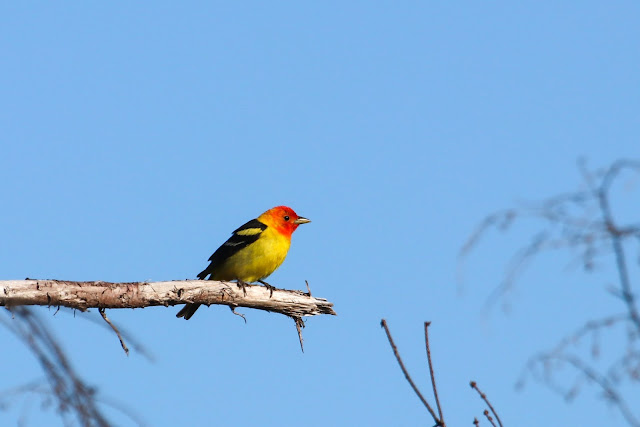 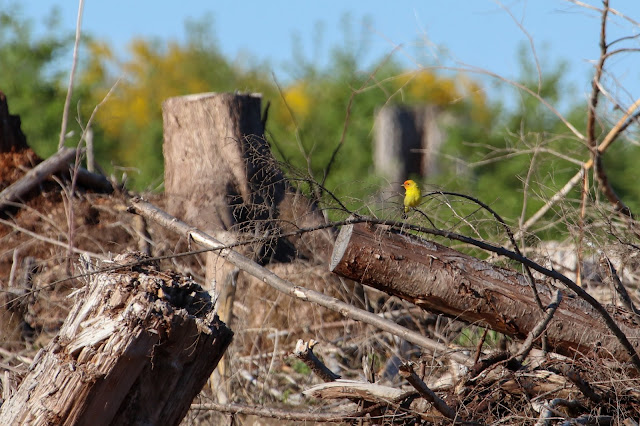 Okay, scotch broom is bright yellow too I guess.  But bleh. 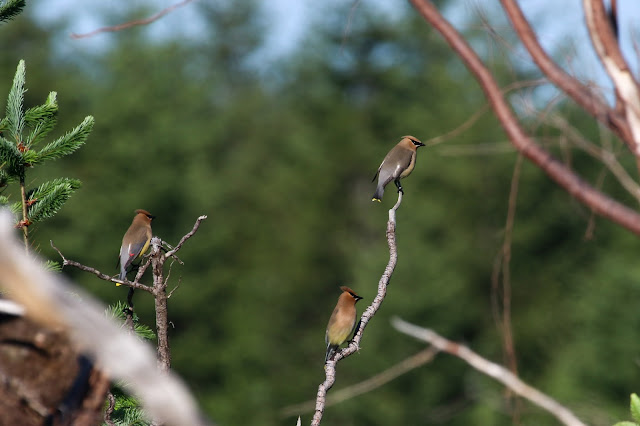 As we were starting to walk back to the car an Olive-sided Flycatcher that had been keeping its distance flew in close to us. 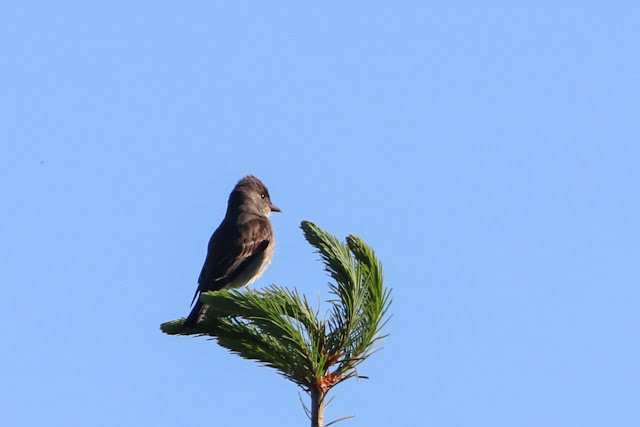 We eventually made it back to the truck so I could get home and go to work.  It was a pretty perfect morning though, with the sunrise and the birds and two tired mutts to boot.

Now let's talk about that other Larch Mountain in Clark County.  I had been wanting to explore the area more and finally one recent Saturday morning Jacob and I decided to hike up to the top along the Tarbell Trail from the Grouse Vista trail head.  We took the scenic route to the trail head which meant a lot of stops for waterfalls, flowers, butterflies, and of course, birds. 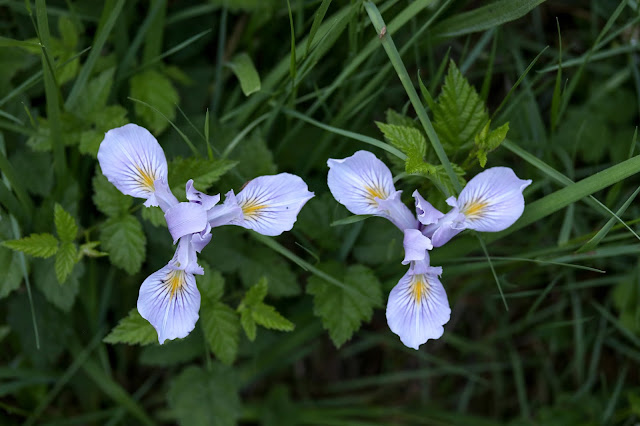 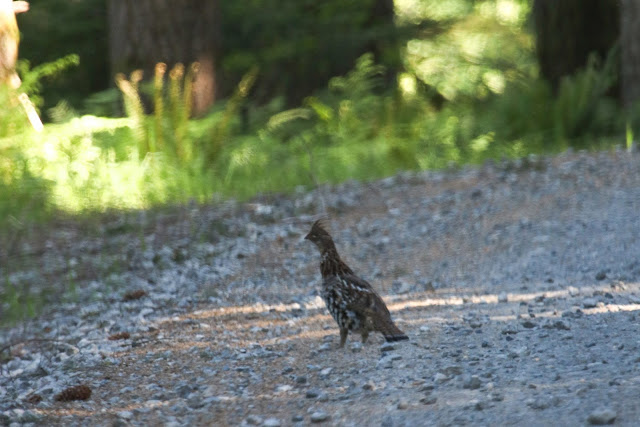 Ruffy in the road! 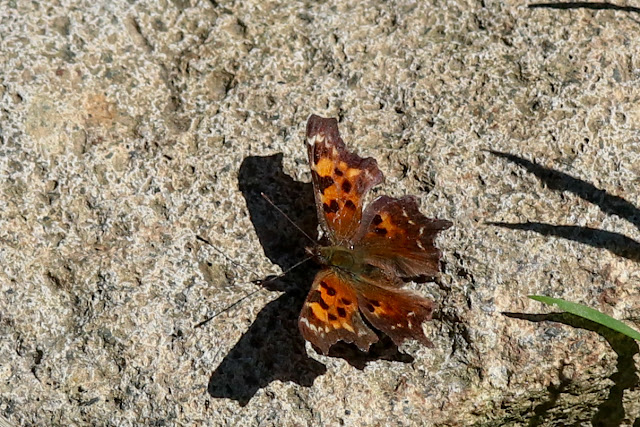 When we arrived at the trail head and saw a ton of cars and people we were a bit disappointed.  Then we realized everyone was hiking to Silver Star and not taking the trail we were taking and all was well again.  We encountered one couple on the trail who meant to be on the trail to Silver Star, and one guy who actually hiked the trail on purpose.  That was it for people.  Yay!  And the avalanche lilies were looking lovely which made me very happy. 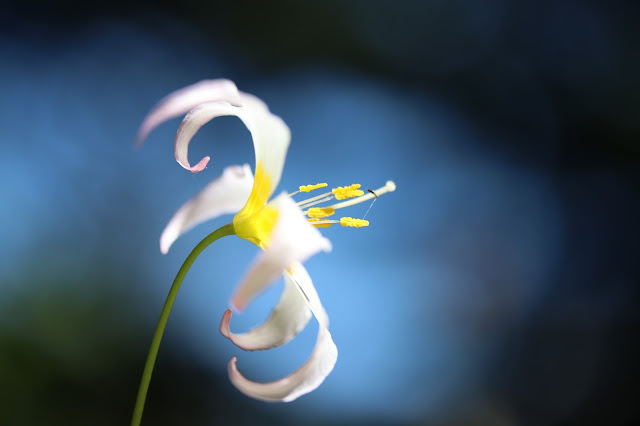 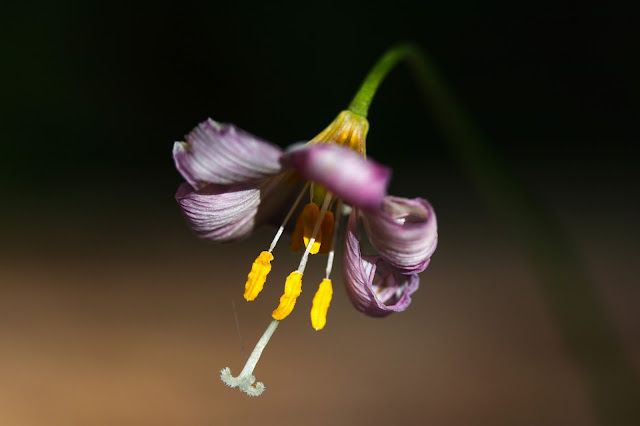 The hike itself is about 5.5 miles roundtrip, with about 1200 feet elevation gain.  Pretty perfect for my energy level that day.  There are a couple spots where the views are nice... 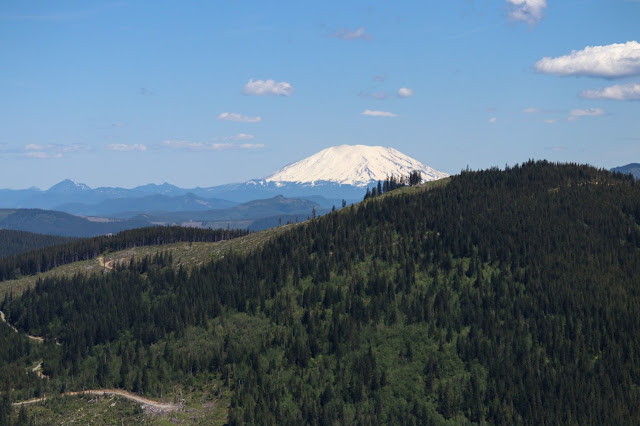 Heard a pika at this spot! 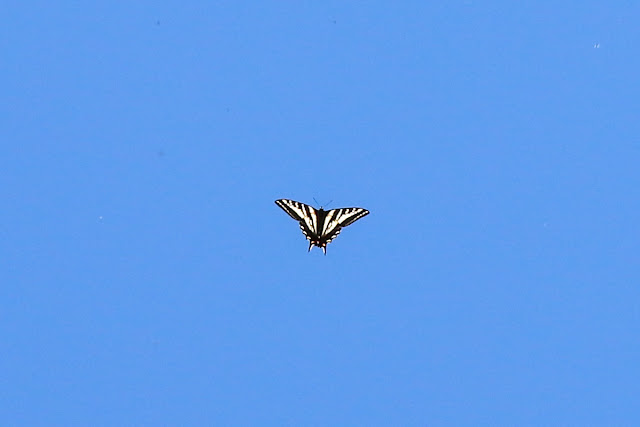 Swallowtail flying back and forth above us

At the top are communication towers and obscured views, but if you hike down the gravel road past the top things open up and you can see all the way to Portland. 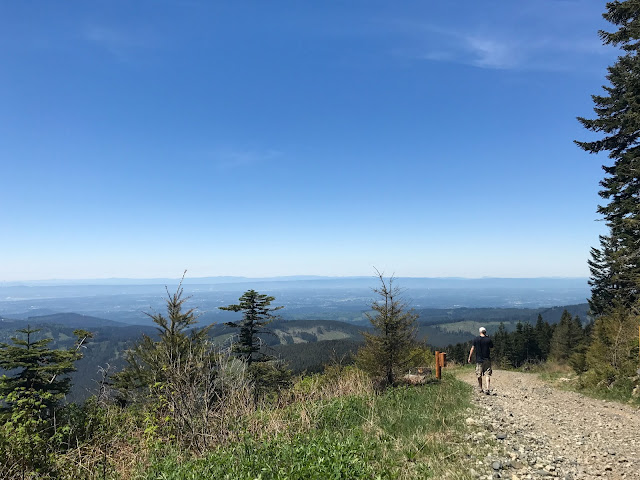 And that was about it for that Larch Mountain.  Birds on the hike included Hermit and Wilson's Warblers, Western Tanagers, Steller's Jays, Pacific-slope Flycatchers, and Black-headed Grosbeaks.