You know what July means?  Ridiculous amounts of time spent searching for White-tailed Ptarmigan on Mt. Rainier of course.  On my recent weekend Audrey and I went up to Paradise bright and early to hike the Skyline Trail up to Panorama Point and beyond, checking all the known ptarmigan haunts.  The forecast was for clear skies so of course it was cloudy with a dense misty fog. 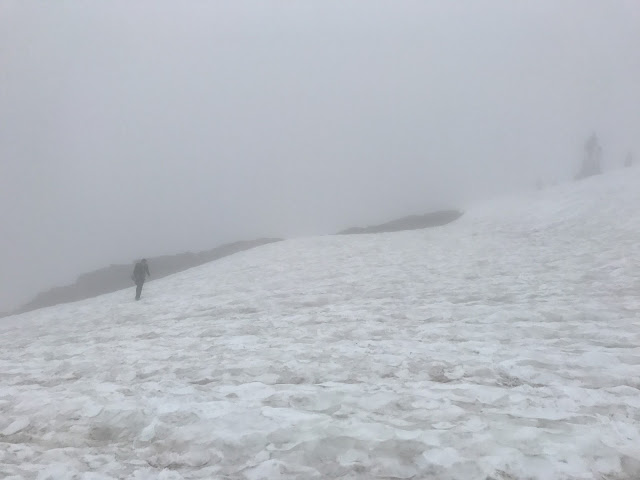 Oh and there was still quite a bit of snow on parts of the trail.  Fun times.  About ten minutes into our first hike we heard a Sooty Grouse booming.  We finally located the fellow tucked into some trees across a snow-covered meadow. 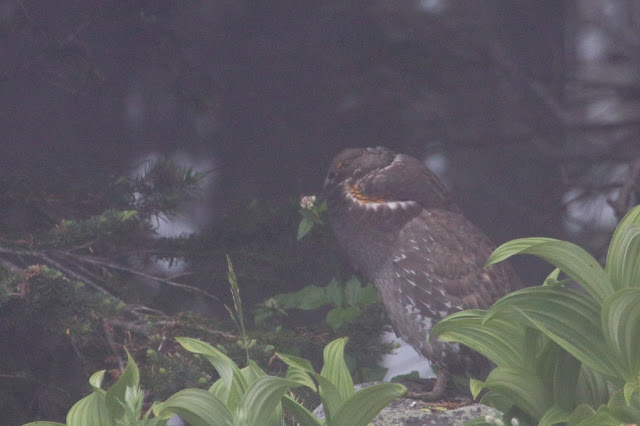 Because of the fragile meadow we could not get too close so we were extra pleased when we found a female grouse poking around right by the trail, not far from the male. 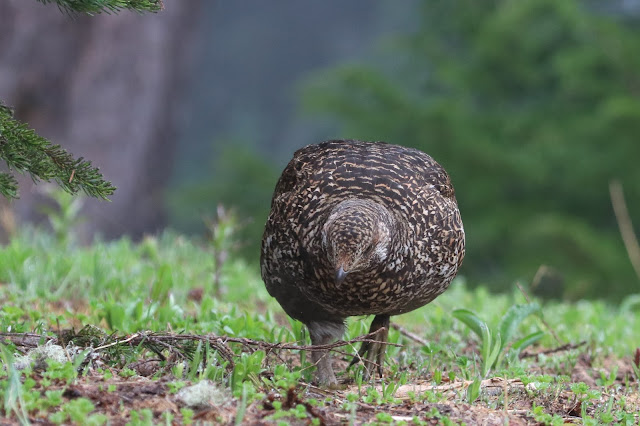 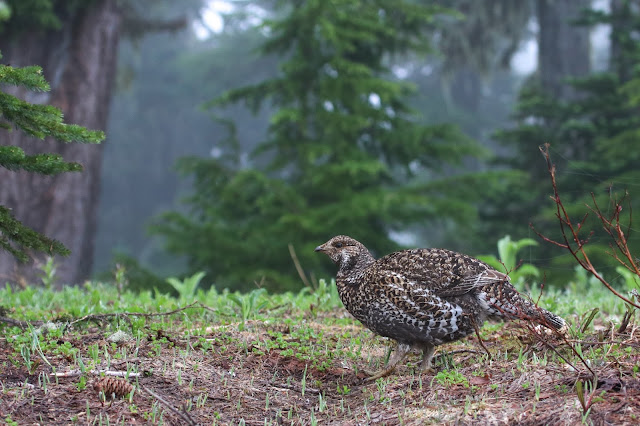 This seemed like a good sign for our chicken search.  We continued up the trail, or what we thought was the trail, passing marmots and squirrels and things.  At the edge of a large patch of snow we noticed a small bird, a Gray-crowned Rosy-finch!  This turned out to be the first sighting of many, which was awesome. 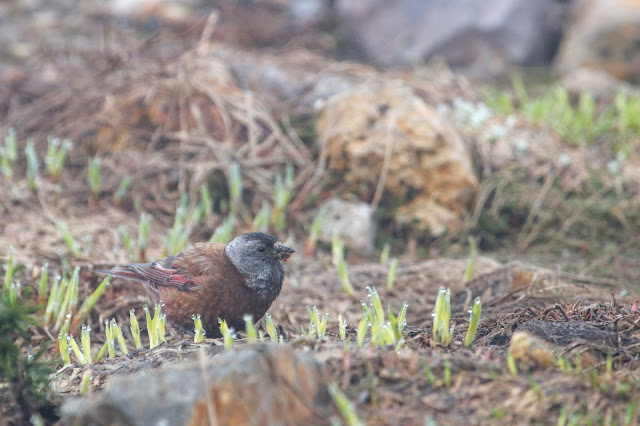 This was only my second time seeing this species, and it was a lifer for Audrey.  It was made even better when a young one appeared and perched on a rock for us, unfazed by camera clicks. 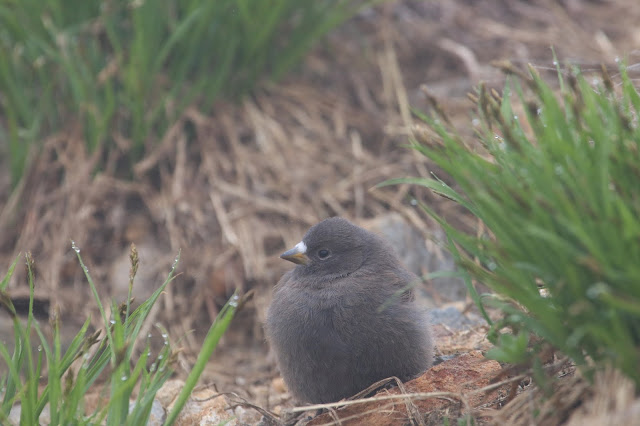 The adult flew over to a nearby snowfield where things looked like this: 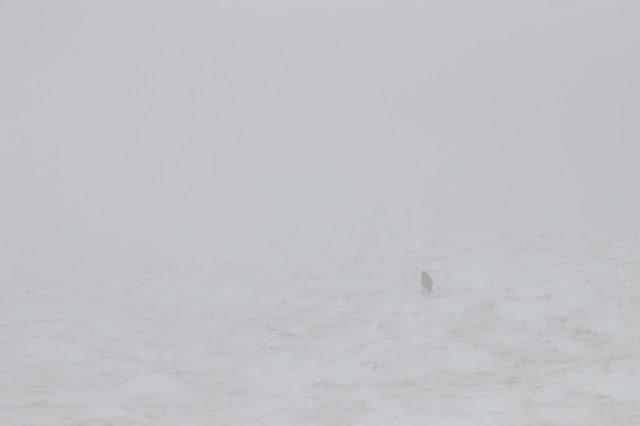 We followed the trail up to Panorama Point, climbed up to High Skyline, and hiked all around the area hoping to stumble upon the elusive chicken.  No luck.  Sometime after noon the fog began to clear and the spectacular scenery became visible. 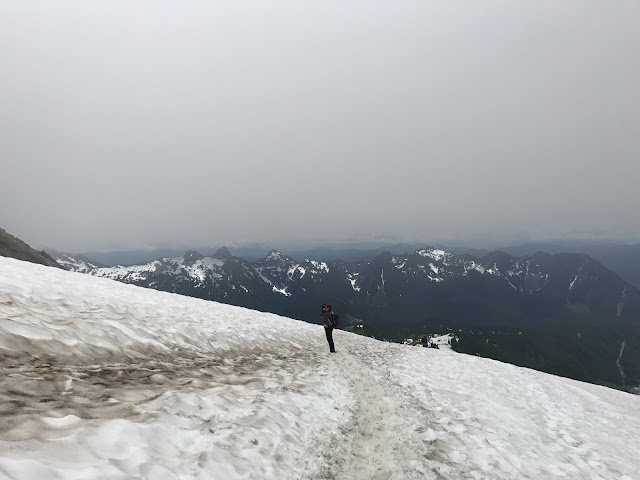 I stopped to take a few quick macros when I noticed some Elephant's head pedicularis along the trail. 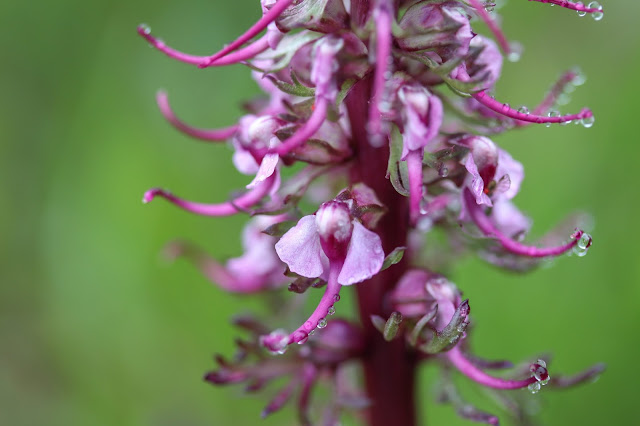 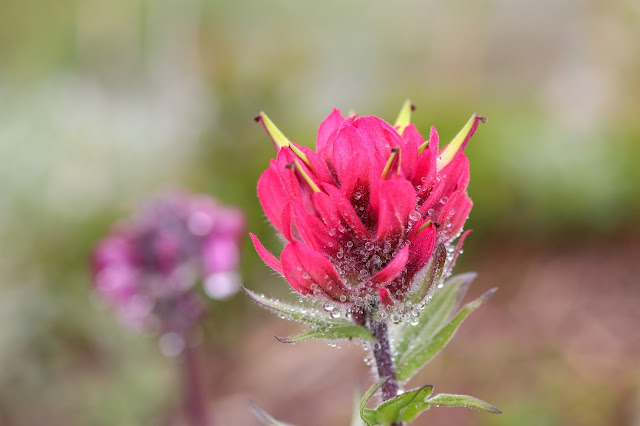 After the fog cleared the clouds broke up and the sun even came out.  It was like hiking in a completely different place.  So of course we ended up doing another loop around Pebble Creek to High Skyline and back to Panorama Point. 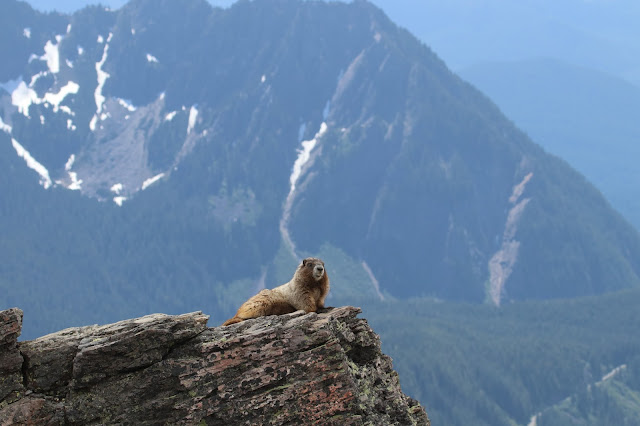 Apparently Clark's Nutcrackers have been fed at Panorama because a couple flew in ridiculously close and stared at us expectantly. 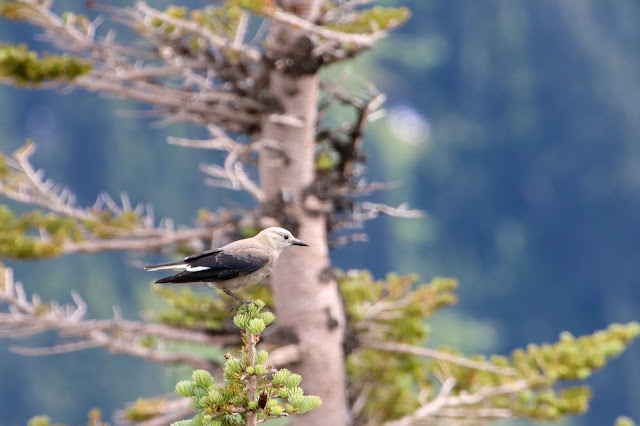 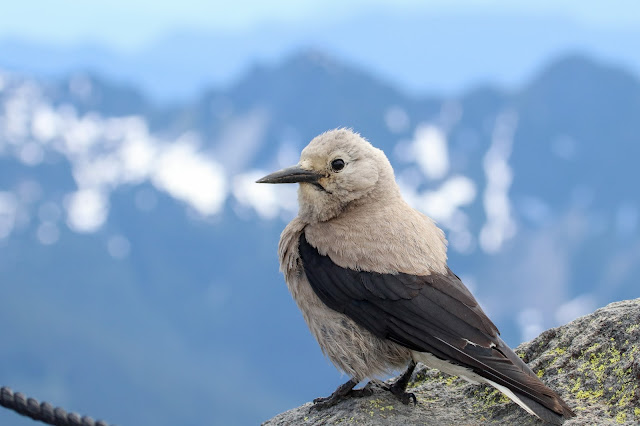 The ground squirrels and chipmunks at Panorama are equally pathetic beggars, but they will actually grab your food if you turn your head.

We eventually decided to call it for the day and hike back down.  More rosy-finches were around to offer non-foggy views. 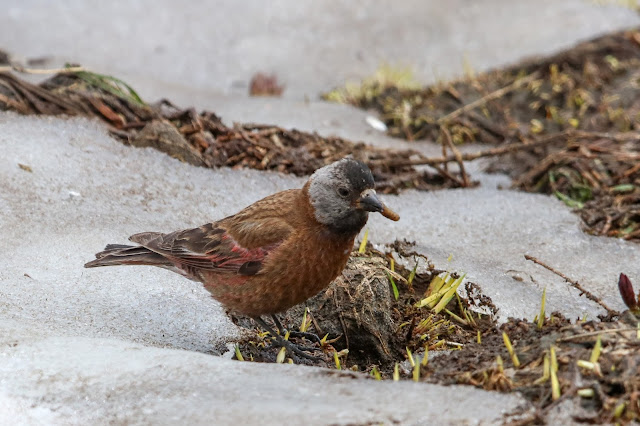 We made it down to the parking area around 5 and talked to a ranger about possible ptarmigan spots.  He suggested everywhere we had just been.  Not helpful.  We camped at the Cougar Rock campground that night, then returned to the trailhead by 5 a.m.  This time the skies were clear, very few hikers were around, and faith in ptarmigan had been restored. 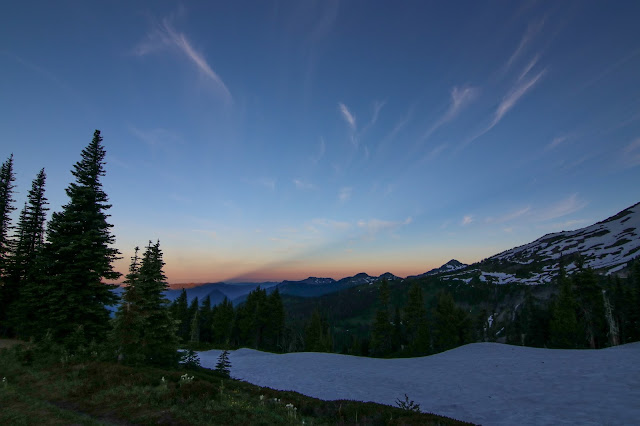 Once again we found Gray-crowned Rosy-finches, though this time there were more begging young ones.  So cute. 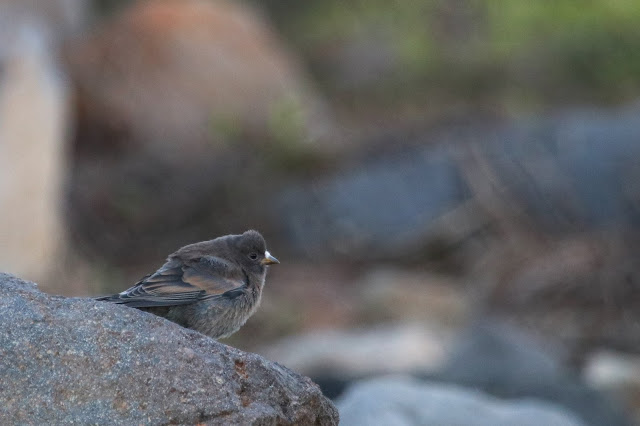 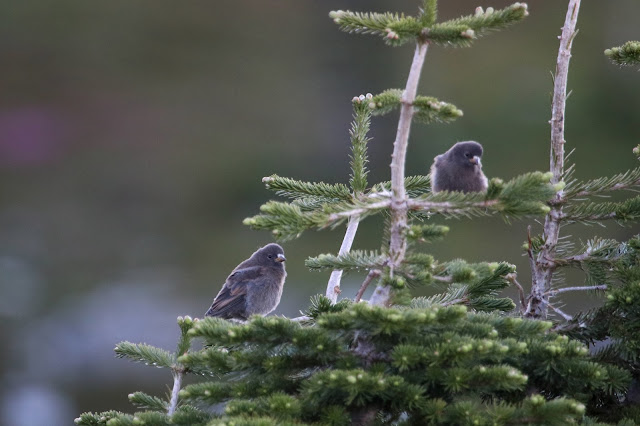 Higher up I had an adult fly to a spot in the trail right in front of me, hop around me, and fly down to the snowfield below.  I took a cell phone video for ya:

Again we hiked up to Panorama Point and beyond, failing to find any chickens at all.  Audrey noticed a couple of marmots were either fighting, making out, or playing way up on the rocks.  We hiked up to get better views of the behavior. 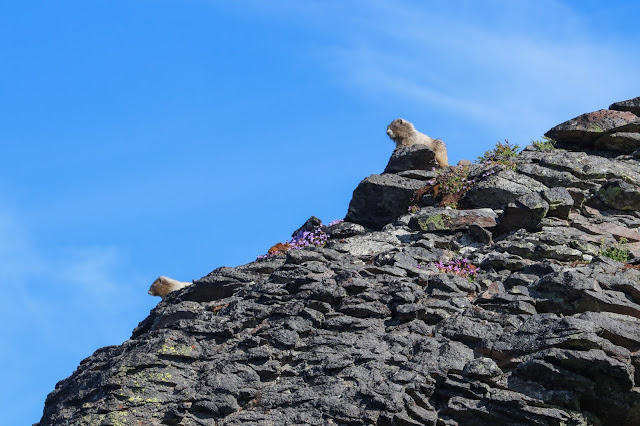 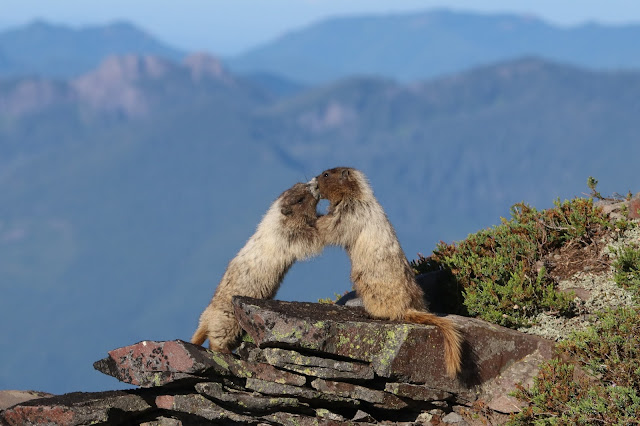 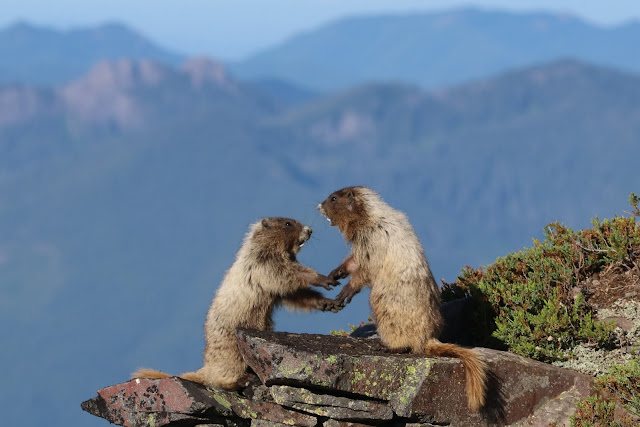 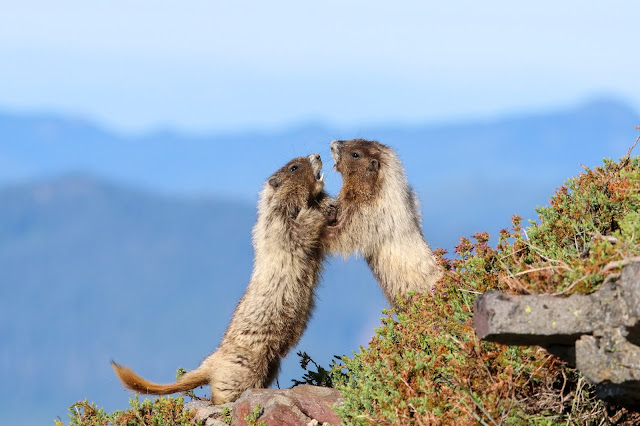 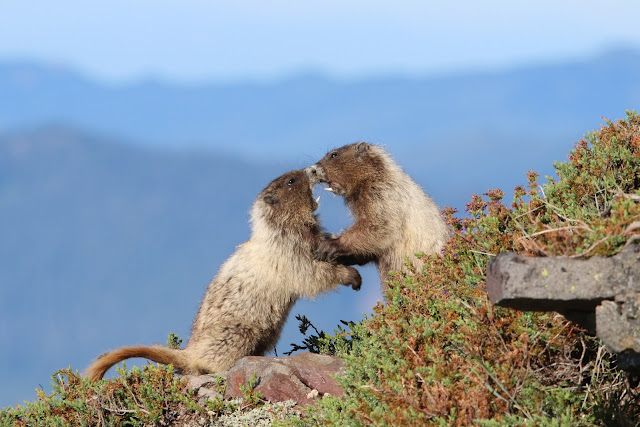 We watched them have about five or six of these "fights" before calling it quits.  They didn't seem like real fights, more like play fights, but maybe that's because they are cute marmots.  Either way, it was awesome to see.

From here we kept hiking the trail above High Skyline up to 7250 feet elevation.  A couple of mountain goats appeared in a snow field ahead and one decided to cross the trail above us. 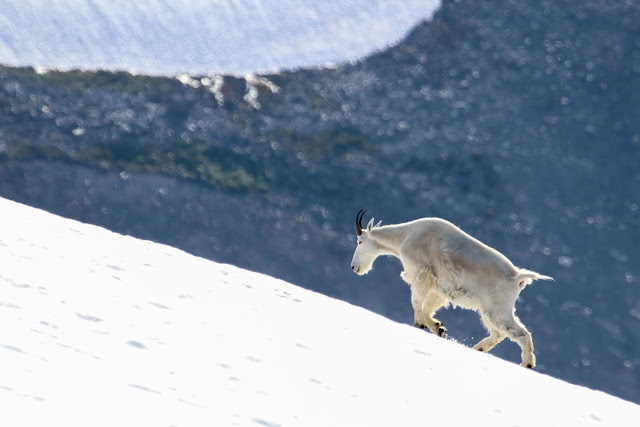 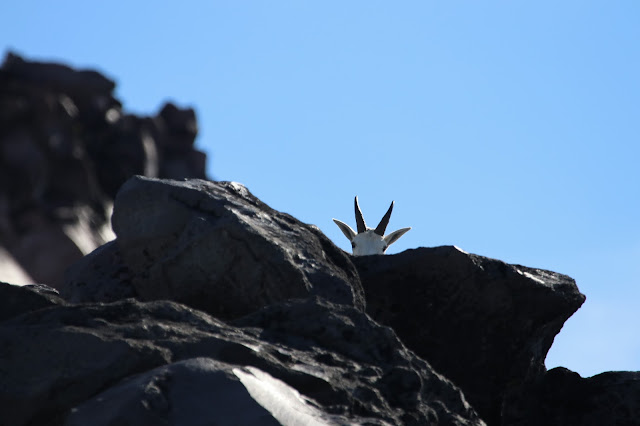 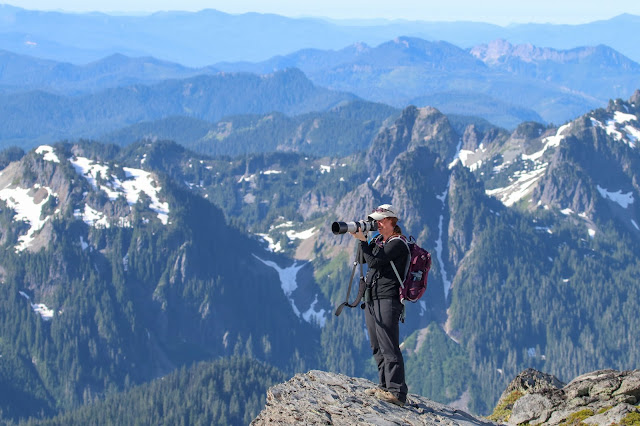 Also in the area were American Pipits.  I haven't mentioned them yet, but they were abundant.  And conspicuous.  The males were putting on fantastic displays, singing and flying way high before soaring down to the ground.  Once I watched the male fly down next to a female and attempt to get it on.  More often they would land on the snow nowhere near another bird.  This one was poking around in the wildflowers, eating bugs. 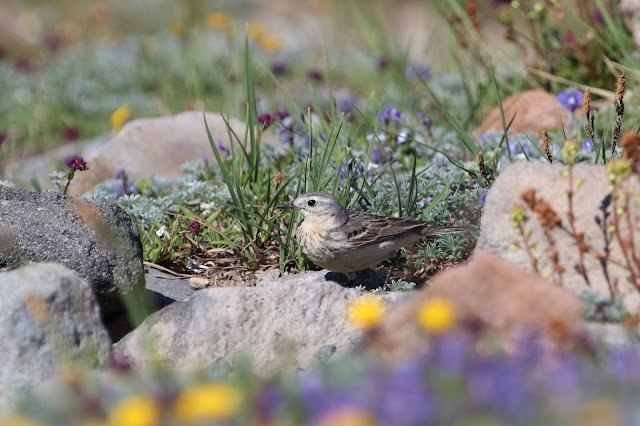 Back near the Pebble Creek trail a pika posed for us on a rock, as pikas like to do. 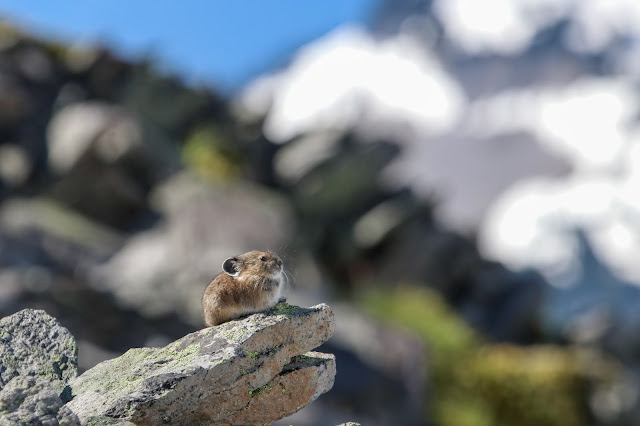 As the temperatures rose and the number of hikers increased we decided to throw in the towel.  We had hiked for over 9 hours the day before, and about 7 hours on this day.  The ptarmigans had eluded us once again.  It's okay though, because if it weren't for these damn chickens I would not have spent two days in such a beautiful place, seeing all the awesome stuff we encountered. 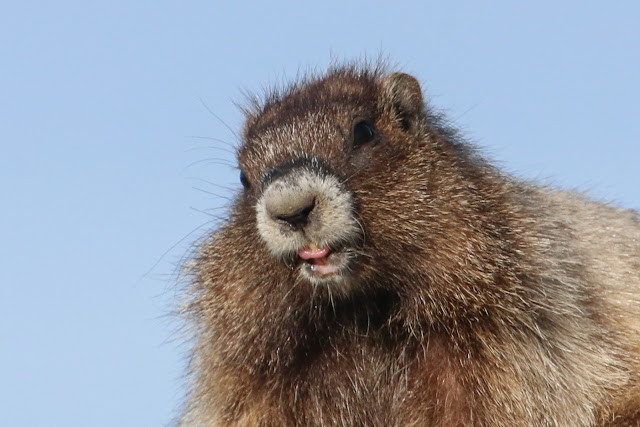