on September 18, 2017
The last few weeks I have spent quite a bit of time birding around Clark County, across the river from Portland.  I like it over there and my future home base will be over there so I need to keep my eBird stats up in that county.  That's right, I will someday be a Washington birder rather than an Oregon one.  Put that in your pipe and smoke it.

On Labor Day Jacob and I went out to the Shillapoo Wildlife Area along Laframbois Road and had a great time with migrants and shorebirds. 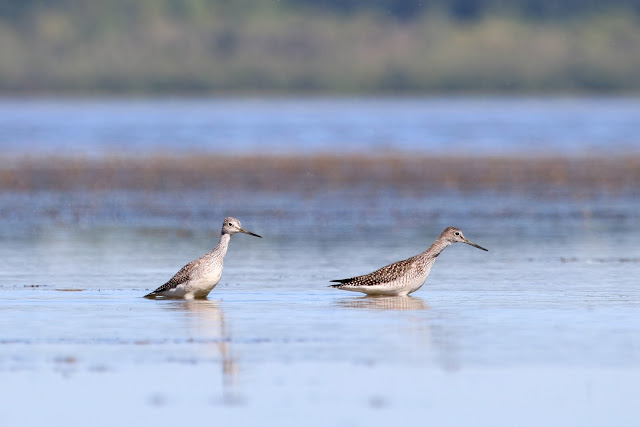 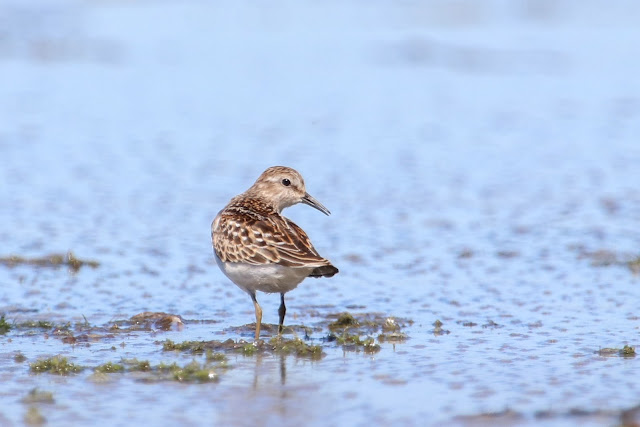 We didn't find anything unusual but it was a solid morning of birding.  On the way back to town for lunch I forced him to look at pigeons so I could eBird them for him, filling a ridiculous hole in his county bird list.

Last week I went out to the fields north of Shillapoo Lake to see what could be found.  American White Pelicans were the most conspicuous birds, flying over almost constantly.  eBird still can't handle the numbers of pelicans in this area. 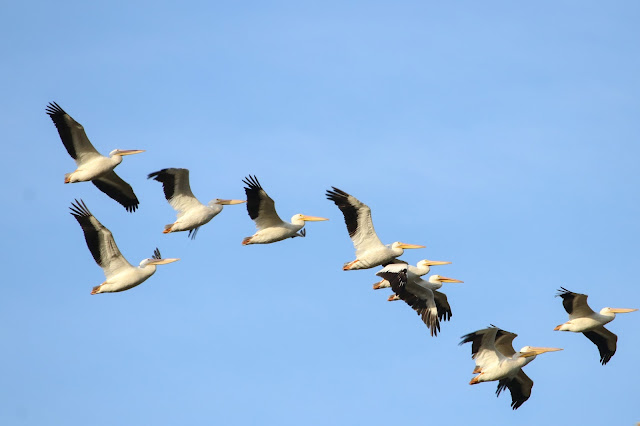 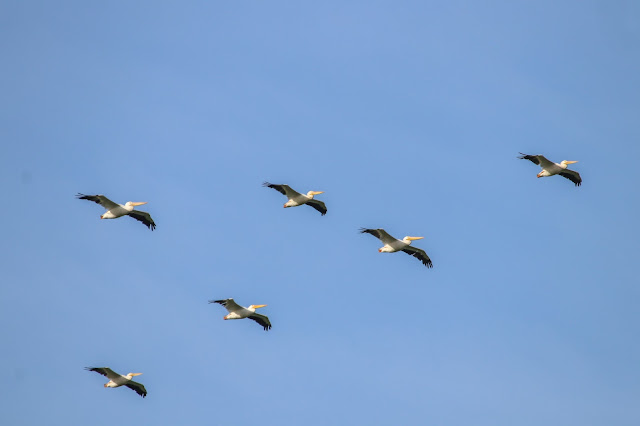 A harrier was cruising over the corn fields and at one point flew right at me.  As I tried to focus it got way closer than expected before it banked north and away. 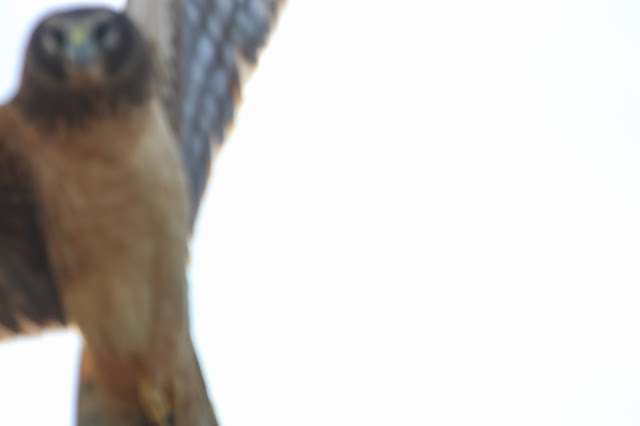 A flock of geese flew over that I thought sounded like Cackling so I took one quick photo.  They were indeed Cackling, definitely on the early side.  Sandhill Cranes were also calling in the distance making fall official.

On one side of the trail is marsh and wetlands, on the other side corn fields and blackberries.  I noticed a glowing white blob in the mess of shrubs, a flashy leucistic Savannah Sparrow. 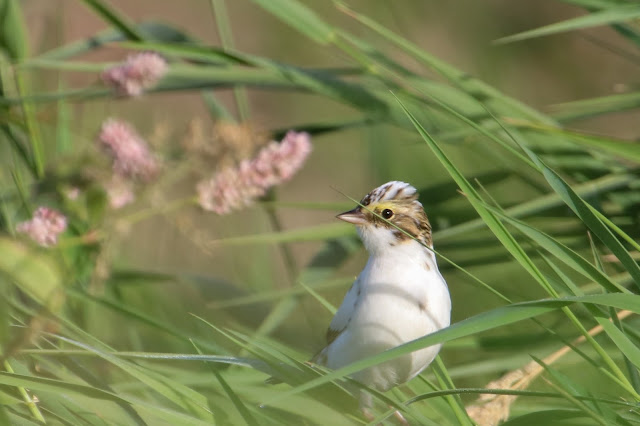 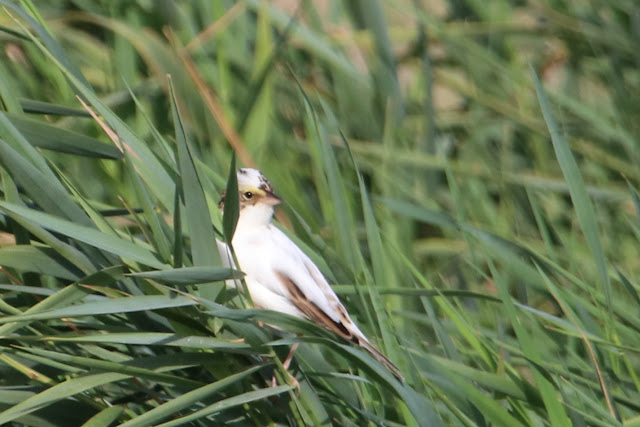 On Saturday Jacob and I went up to Woodland in Cowlitz County for the reported juvenile Sabine's Gull.  Unlike most Sabine's, this bird had stuck around for almost a week and I was particularly excited to see it.  Upon arrival at Martin's Bar a birder came up and told us exactly where to look, and when we looked, there it was.  Birding is easy.  It put on a great show flying up and down the river, eating stuff, showing off its lovely wing pattern. 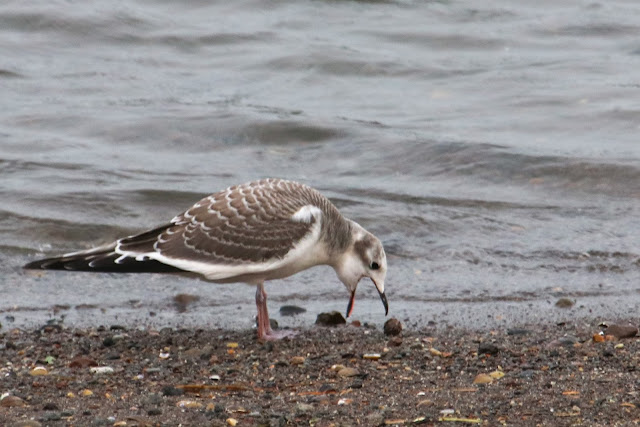 It coughed up that round thing (some kind of shellfish?) and then half-heartedly poked it like it might try to eat it again. 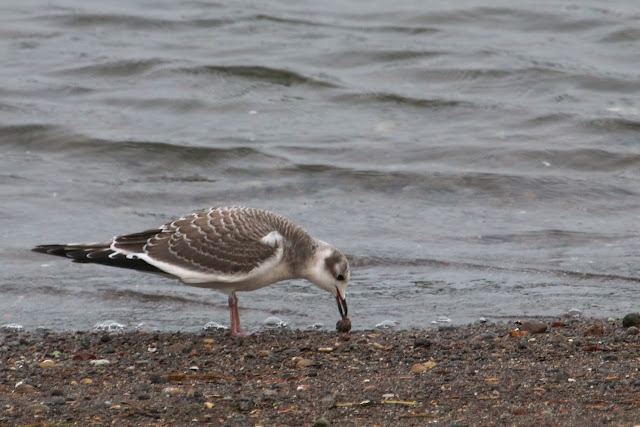 Then it caught a little fish. 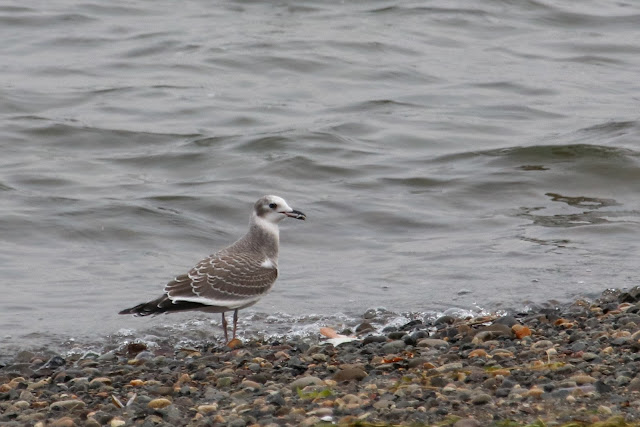 This was my first time seeing a Sabine's from land so it was very cool to see it walk around.  Of course, the real show was the bird in flight. 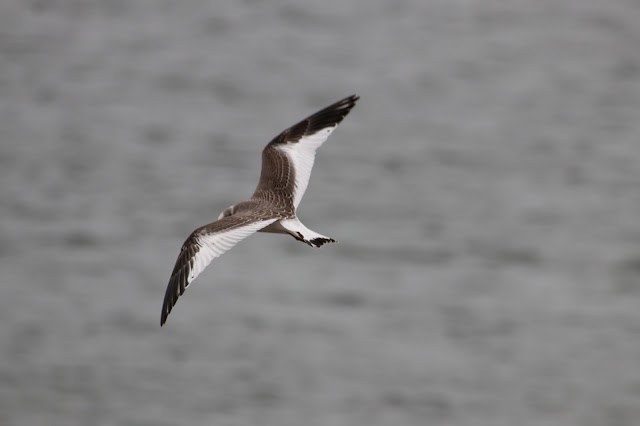 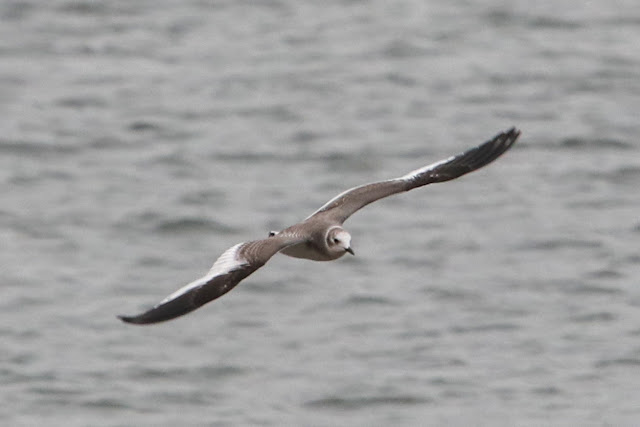 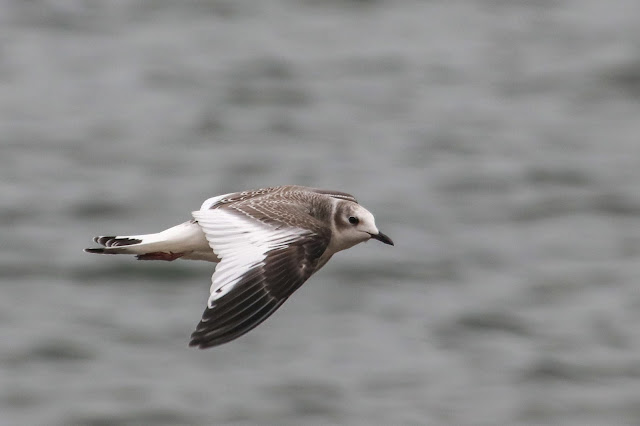 So cool!  It was a state bird for me and a lifer for Jacob.  Yay!  When it flew south one last time we decided to drive down the sandy road to give it a last look.  An older woman driving a prius also drove towards it, then stopped and parked, nervous about the deep sand.  She walked up to us and asked where it was, and when Jacob said it was quite a ways down she said "I ride with you" and jumped in the back of the car.  Old ladies are great like that.  Then the gull chose to fly back towards us and land nearby, so she jumped out.

We continued driving south to a spot where we could turn around and found five Horned Larks in the road, which came up as rare in eBird.  Fun.

From Woodland we drove back south to Vancouver and checked the pond on Lower River Road for the reported Snowy Egrets.  We found one Snowy quickly, always a good bird this far north. 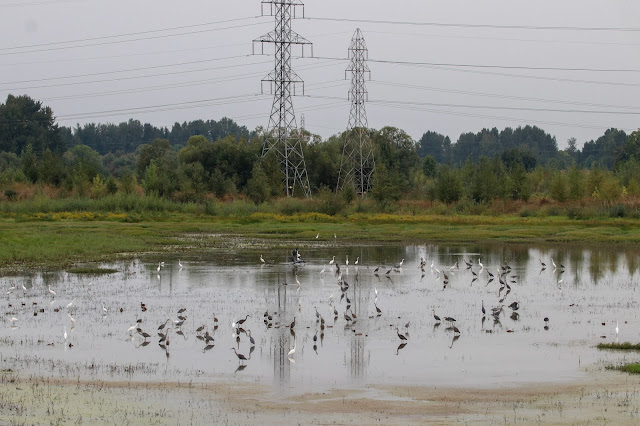 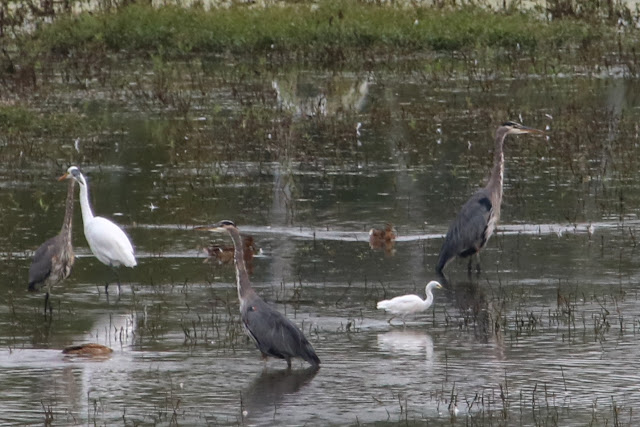 After the egret we checked out the bridge trail about a mile (half a mile?) north of Vancouver Lake Park.  The trail leads through the woods to the lake and I was hoping to catch glimpse of the reported Common Terns.  No luck there but Jacob did make some worm friends. 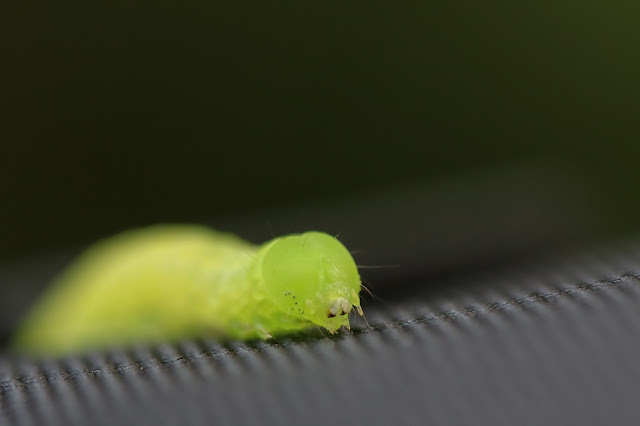 We returned to the road and explored in the other direction, the area I had been last week north of Shillapoo Lake.  Sandhill Cranes were flying over non stop. 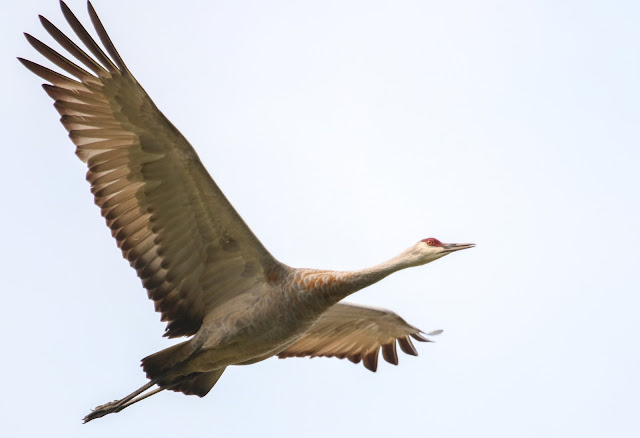 In the middle of the trail I noticed a wasp fly up from the ground, then another, and another.  Further inspection revealed a hole in the ground with a perfect grass canopy. 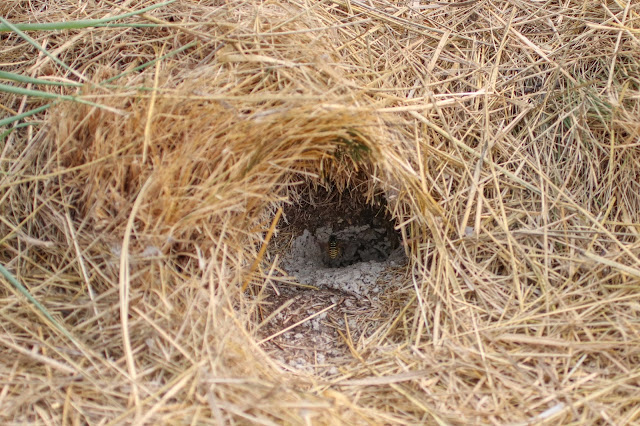 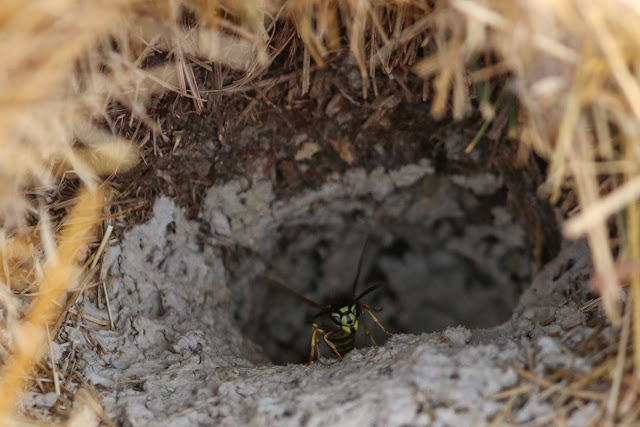 Yellow jackets, I think.  I thought it was cool to see, even if they're not the most pleasant insect to share space with.


As we were walking back to the car Jacob pointed out some soaring birds.  We picked out two pairs of harriers plus a Peregrine Falcon all soaring.  The falcon and harriers scuttled a little here and there and I took some bad blown out photos. 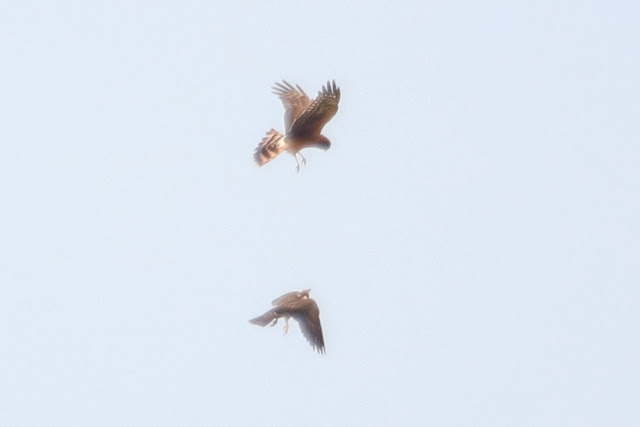 The falcon soared off to the east and the harriers returned to messing with each other.  We weren't sure exactly what they were doing, but it was fun to watch.