on October 09, 2017
In an effort to work on my 3000-mile Radius year list, Jacob and I flew out to Massachusetts last week.  Jk.  We went to visit my family.  Of course there were birds and of course I will share them with you.  I'll begin at the beginning, about an hour after picking up our rental car, when we stopped at Scusset Beach State Reservation.  Since this is a travel post I am linking each location's eBird hotspot page if it has one. 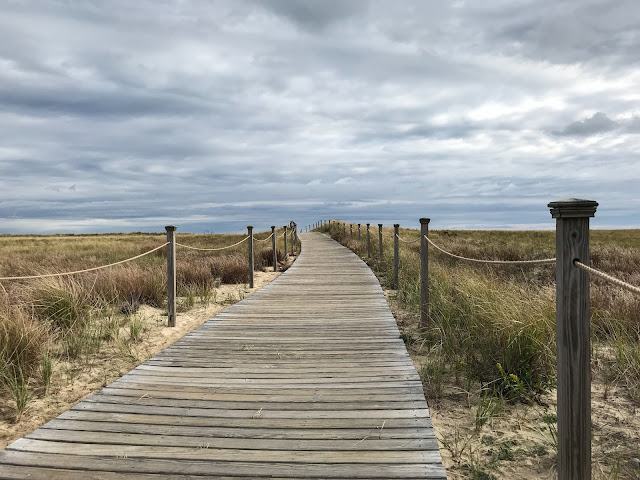 We walked out to the beach and Jacob began picking up lifers left and right. 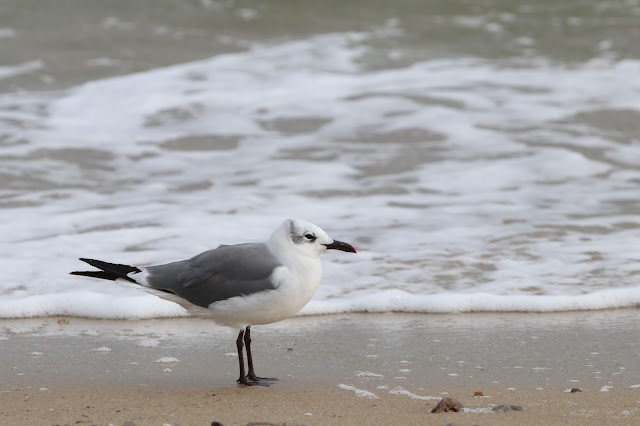 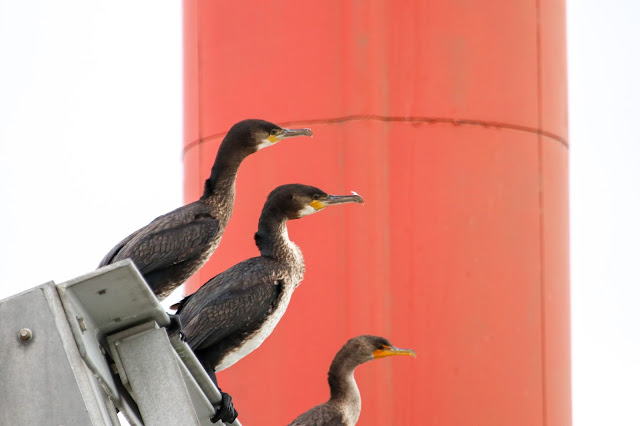 We didn't see any full adults, just these scruffy juveniles.   Back on the sand we passed a few Black-bellied Plovers mixed in with the Sanderlings. 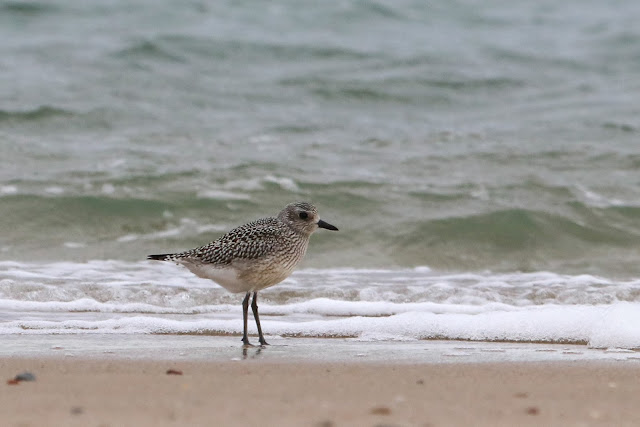 It was a perfect little stop on the way to my parents' house. 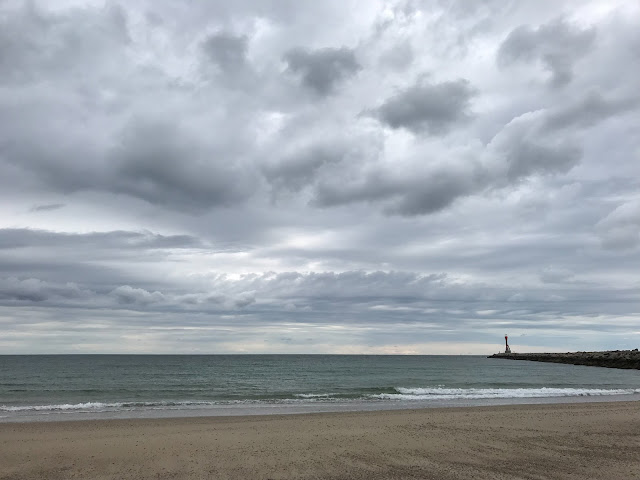 Throughout the week we wandered around my parents' Cape Cod yard and kayaked in the lake, finding more birds and things.  Cooper's Hawks were as common as cardinals, or so it seemed. 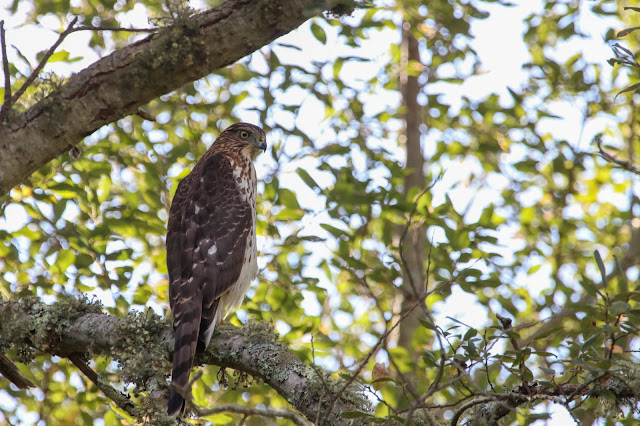 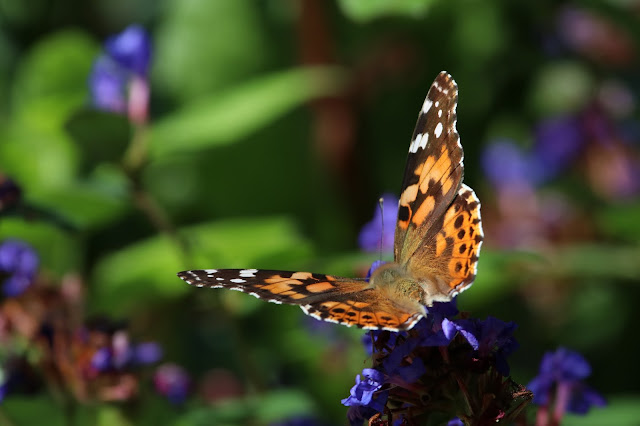 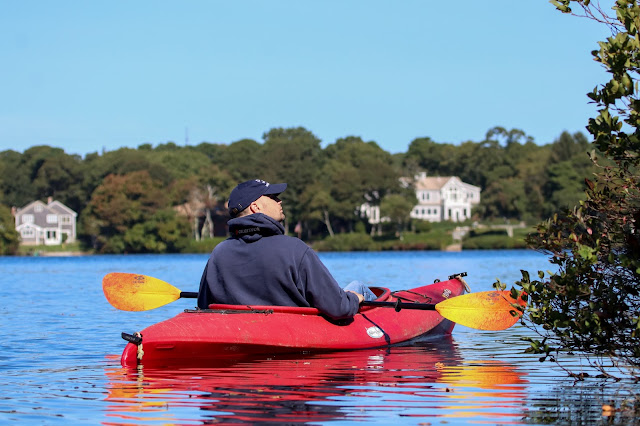 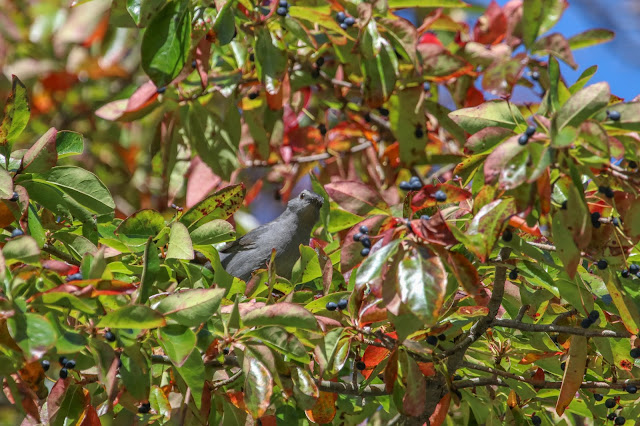 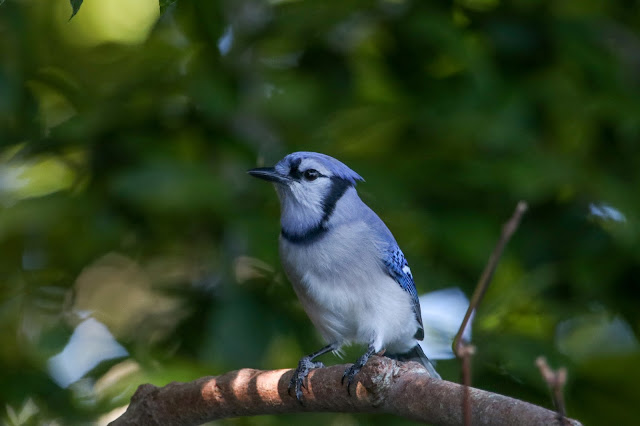 One morning we went out to the South Sandwich Conservation Area (Ryder Conservation Land) to look for warblers.  It was very birdy but we could only find one Black-throated Green Warbler.  This American red squirrel was far more accommodating for photos: 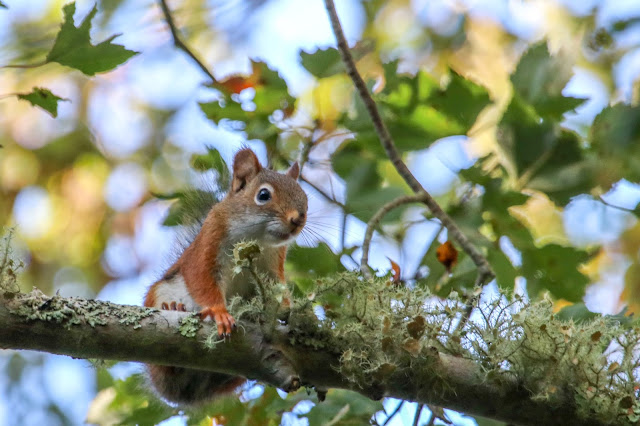 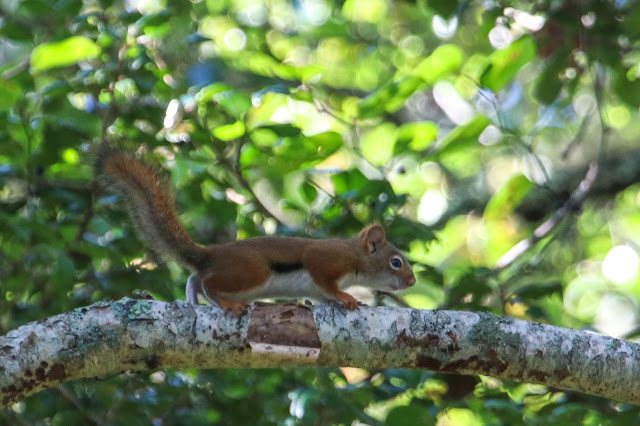 This fungus took over one section of trail: 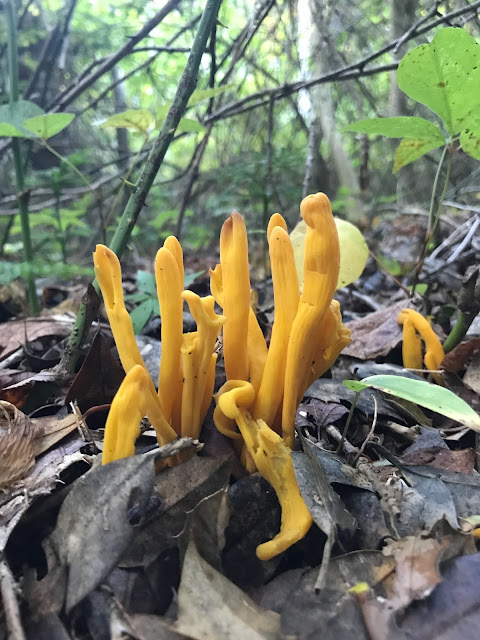 One afternoon we went out to Peterson Farm with my dad for a nice walk around the area.  Jacob found a Brown Thrasher, which was awesome. 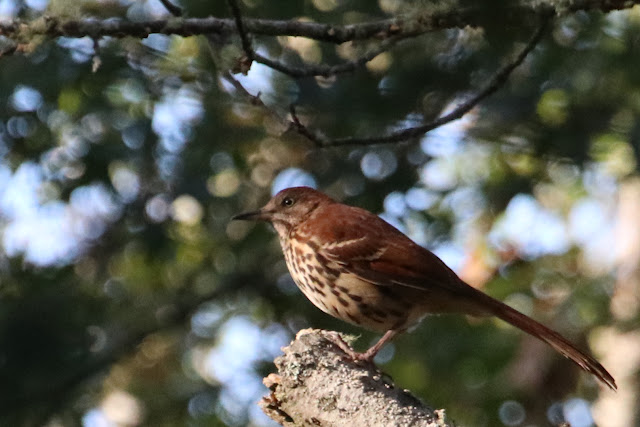 I was pscyhed on these parasitic plants: 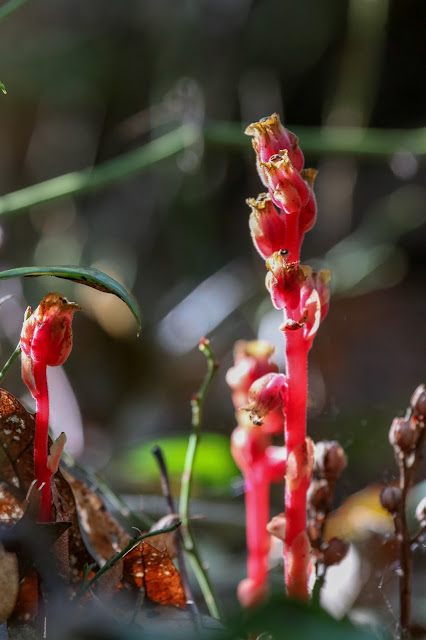 At the end of our loop around the area we stopped to check out the sparrows again, hoping a Bobolink would appear.  Instead a House Wren appeared, and then a Blue-headed Vireo.  I'll take it. 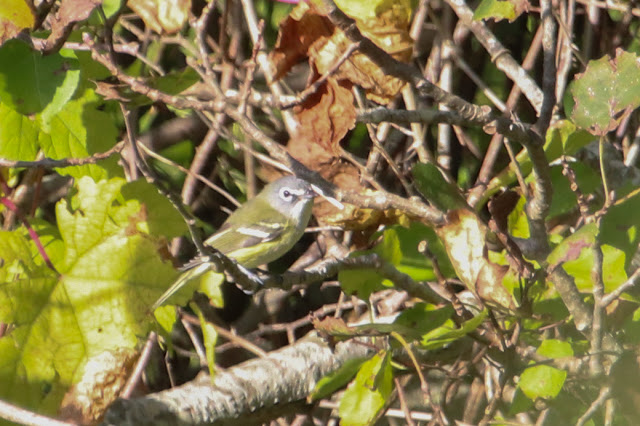 Such a good photo.

Jacob and I went out to Boston to hang out with my brother one day.  We got to meet his new-ish pup, Willow. 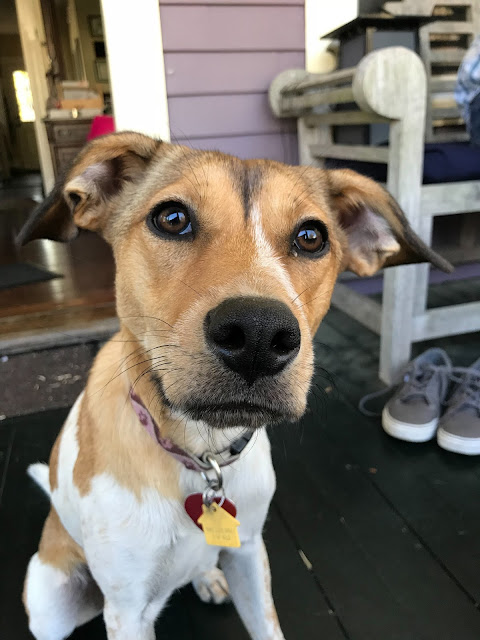 After a hike through the woods with Willow, we set off on the T to downtown to walk the Freedom Trail.  I'll skip to the birds on the trek, like the Blue Jays that were nibbling on this historic (probably) building. 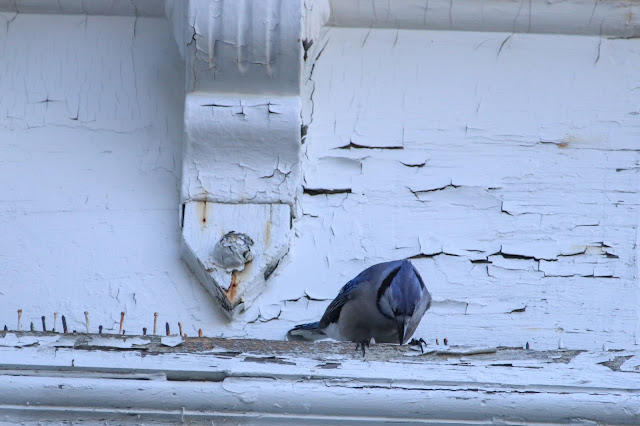 Jacob and I had joked about how much Black Phoebes like perching on gravestones, so when we arrived at the Copp's Hill Burying Ground he demanded a phoebe.  I thought I was being clever when I pointed out this grave stone: 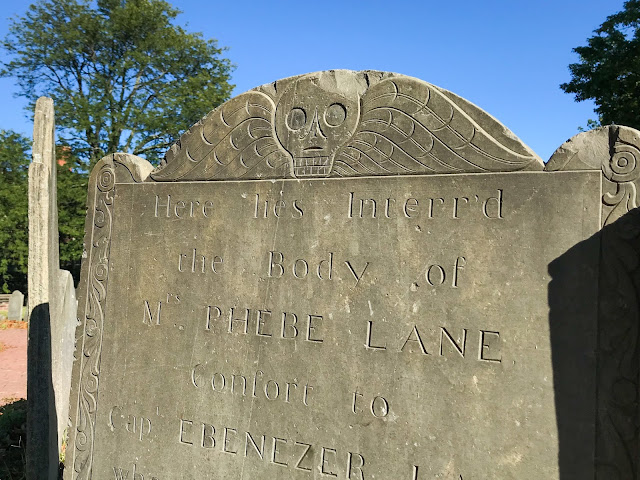 A few minutes later we noticed a couple of actual Eastern Phoebes flying from grave stone to grave stone.  Of course. 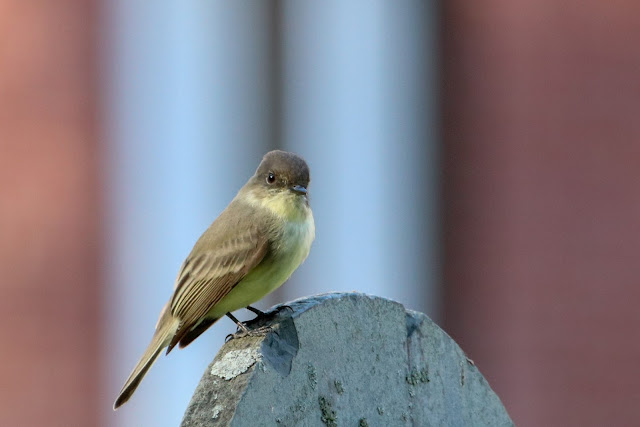 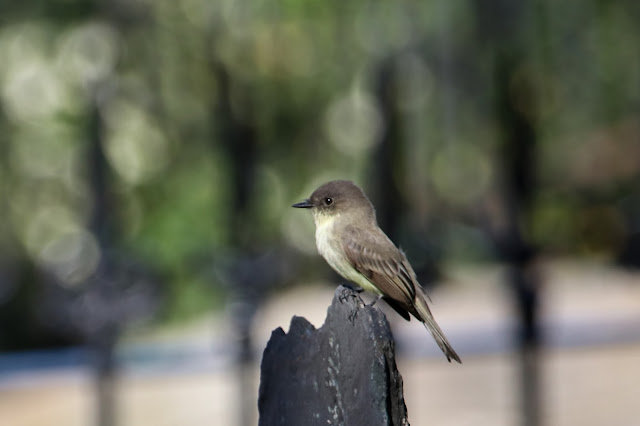 At the end of the trail is the Bunker Hill Monument, with 294 steps leading to the top. 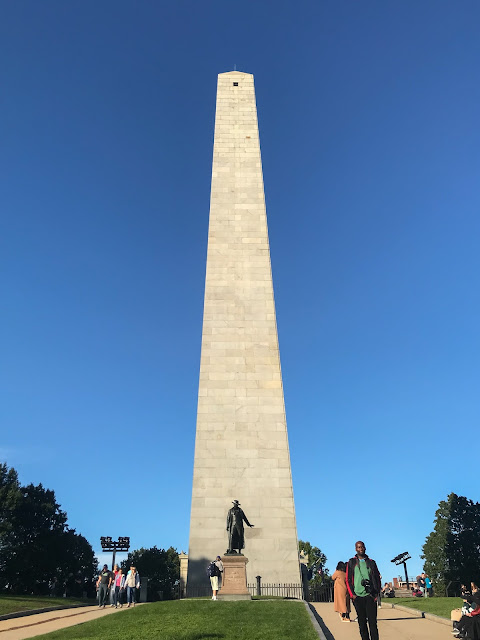 There are little windows all around the top with views of Boston, the bay, and the burbs.  People push coins out the screened windows because that's what people do.  It seems some birds land in the windows and eat other birds too.  One window ledge held the head of a bird. 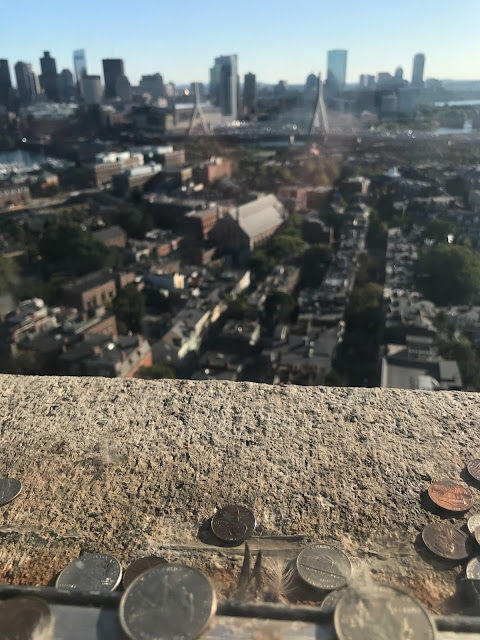 Note the bird bill sticking up at the bottom of the photo.

On our way back to my brother's house he suggested stopping for a short walk to a great view of the city.  This short walk was painful after climbing that monument, but the view was indeed great. 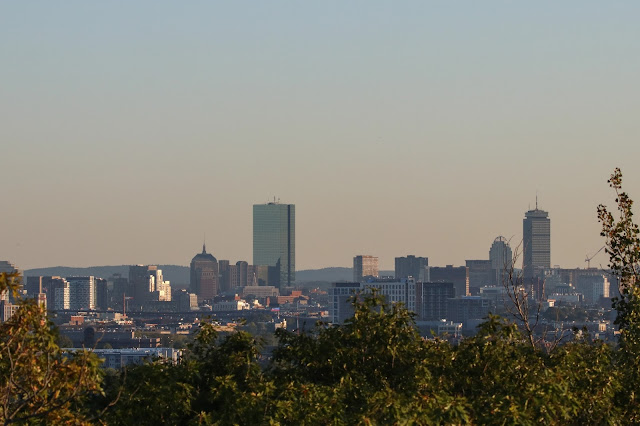 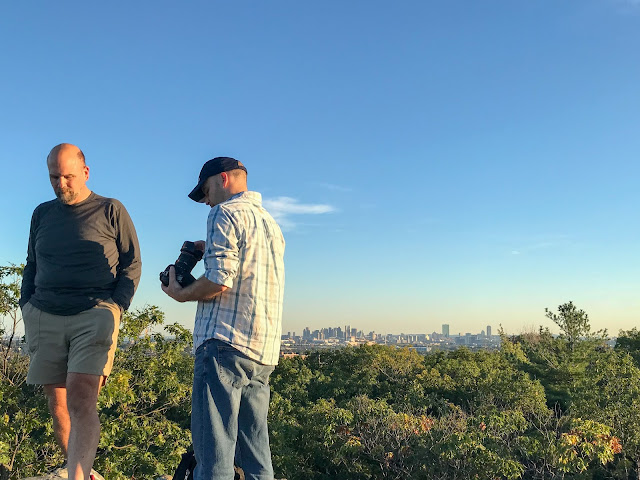 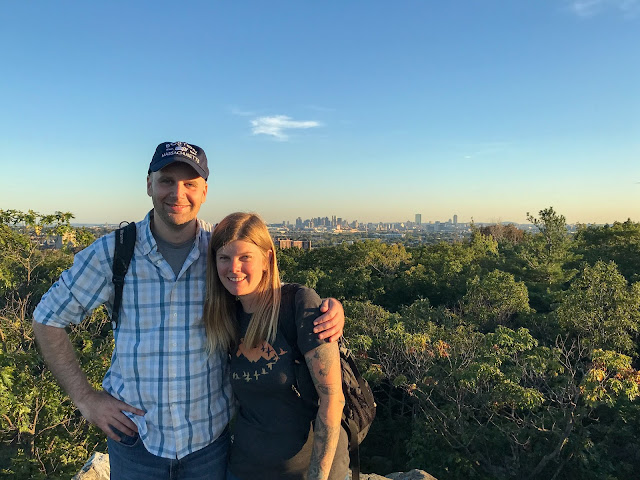 I'm going to squeeze one last outing into this post, an early morning trip to Sea Gull Beach in Yarmouth.  We actually had some warbler action here, which began with Yellow-rumpeds and then a gorgeous Canada Warbler I failed to photograph.  I did get some shots of a Prairie Warbler as it flitted through a shrub. 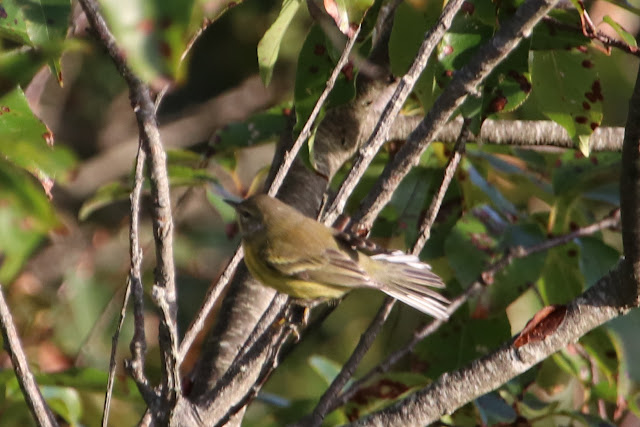 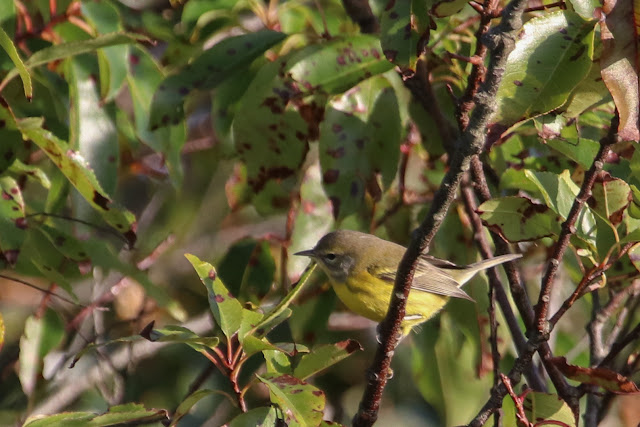 We also had a Palm Warbler here, and the only Northern Mockingbird of the whole trip (serious wtf). 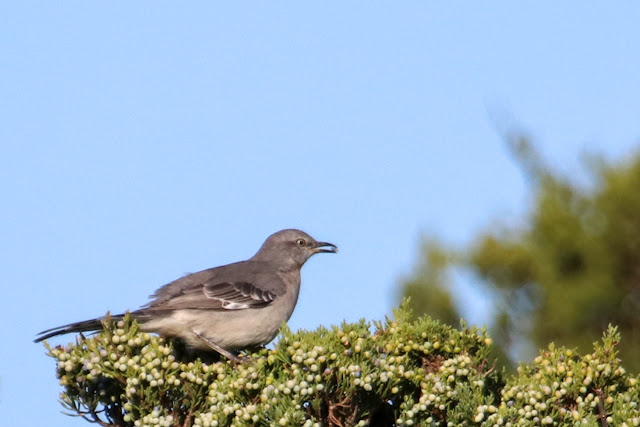