Jacob and I had a grand plan for our days off together this week, a plan that involved driving east to track down a Snowy Owl and tons of other birds.  This was Plan A.  But icy weather in the gorge and all the way to Walla Walla made us reconsider and implement Plan B instead.  Plan B began with warmer and wet driving up to the Tacoma area to look for a Gyrfalcon. 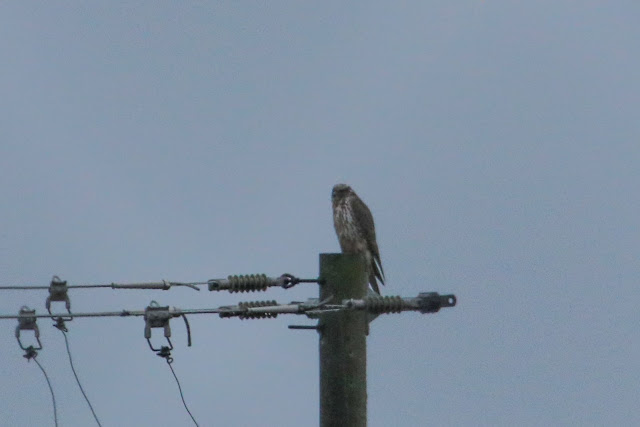 It was exactly where it was supposed to be at Joint Base Lewis-McChord.  Easy peasy.  We set off on our next quest in Seattle where a flock of Common Redpolls had been hanging out at Green Lake.  Again.  I had looked for these birds with Audrey back in February 2016 and dipped.  This time we got out of the car and walked the dogs over to the nearest birch trees and there they were.  Easy peasy. 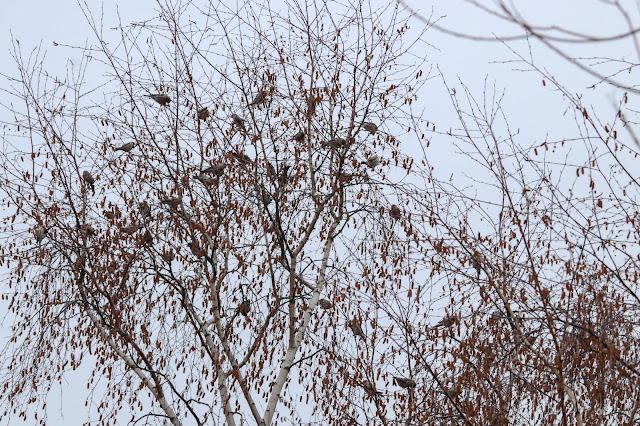 Also, life bird!  Most likely my last lifer of 2017.  Views were not amazing but we were going to walk the dogs around and then return.  Before we could do anything a Bald Eagle showed up and tried to nab a coot. 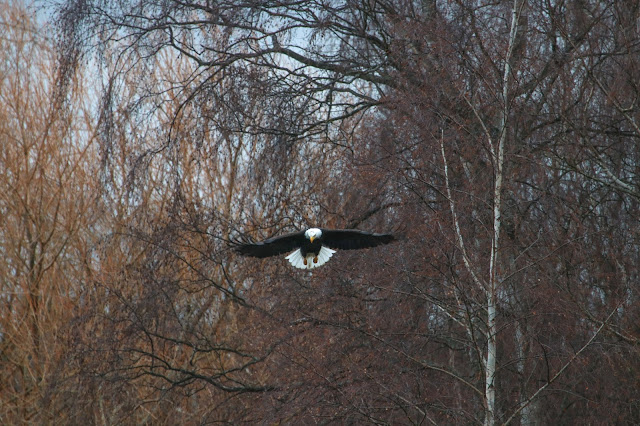 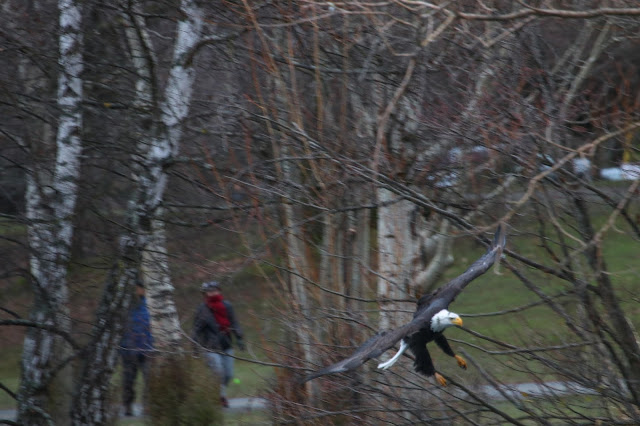 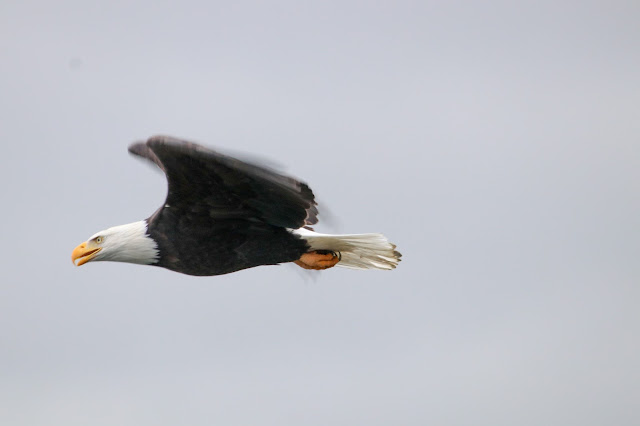 There are a lot of tame-ish ducks at Green Lake including Northern Shovelers. 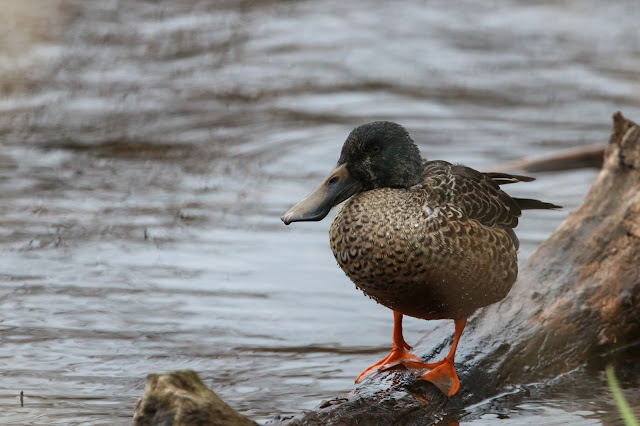 Shovelers are not usually so friendly in these parts so it was nice to look at one close up.  So handsome.

We eventually turned around and walked back to the redpoll area.  Some Bushtits made us look up and I was psyched to see some closer redpolls than earlier. 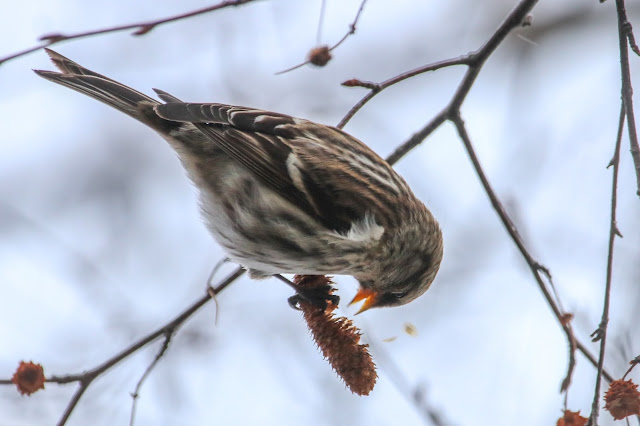 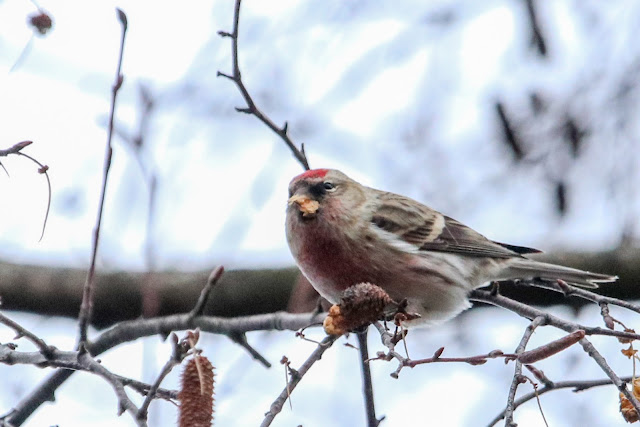 After several minutes one flew down even lower and gave brief looks without a white sky background. 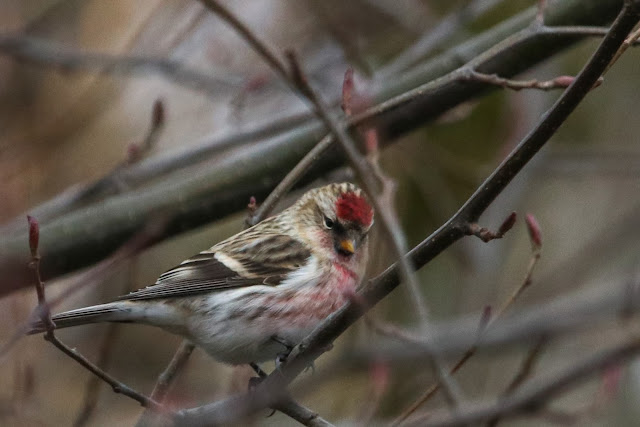 Next stop on our bird-chasing adventure was a backyard not far from Green Lake where a Rose-breasted Grosbeak had been visiting.  Someone had even left chairs for watching the feeder over the fence. 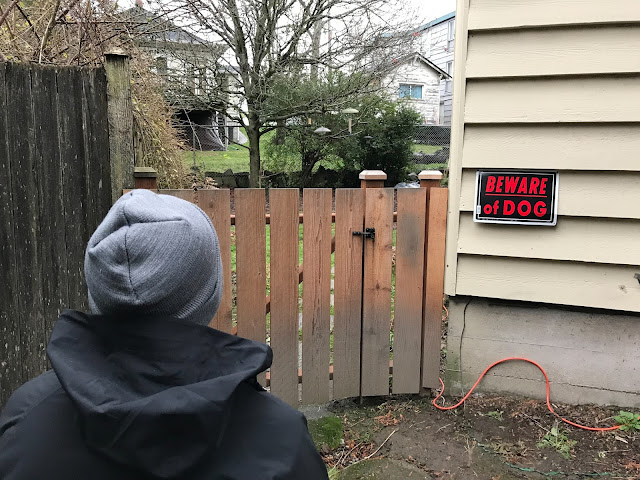 We had sparrows and a Bewick's Wren and Steller's Jays.  A couple showed up after we had been there for 20 minutes, and the man proceeded to declare a male House Sparrow the grosbeak.  It took the woman a few tries before convincing the man he was wrong.  We left after giving it an hour and headed to Naked City Brewery for lunch.  The artwork on the walls had a theme and that theme was weirdly snowmen.  And birds. 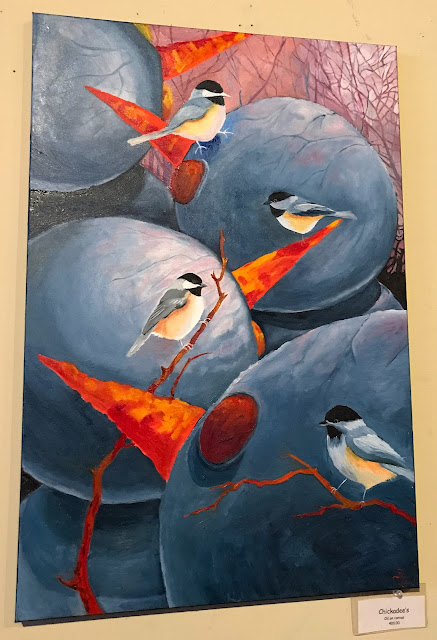 After a delicious beet burger, pile of fries, and a Crossfire IPA I was recharged and ready for our next idea, which was take the ferry from Edmonds to Kingston and drive to Port Angeles for more birding. 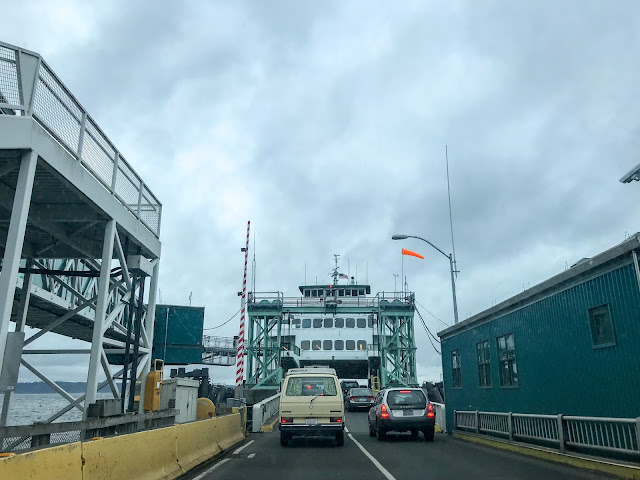 My first time on a Washington ferry

Birding from the ferry was not as good as I had hoped, with the most birds seen after we had to get back in our cars.  We managed the only Brant of the trip though. 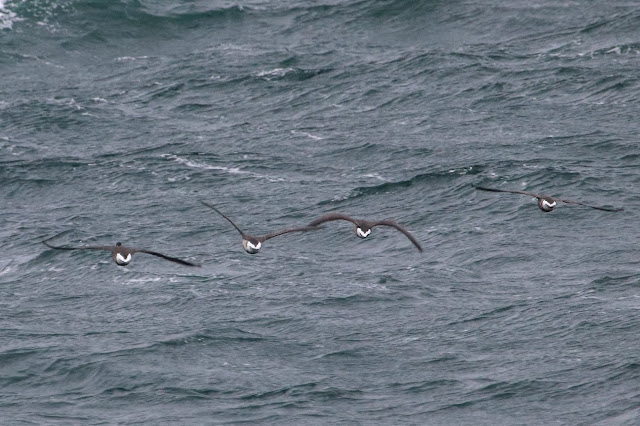 We stopped at Salsbury County Park on our way to Port Angeles, where we had also stopped over the summer on a trip.  A little spot to walk the dogs and see some alcids. 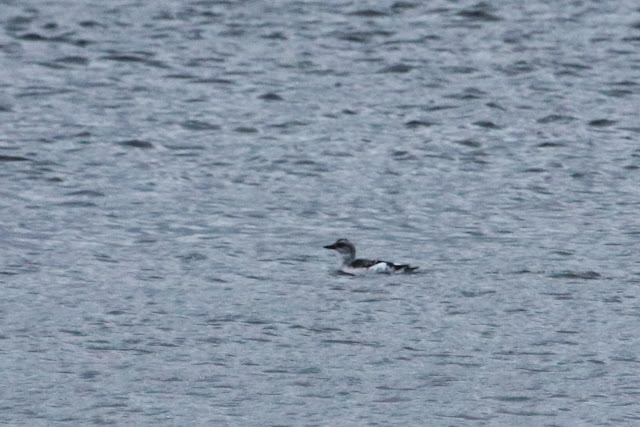 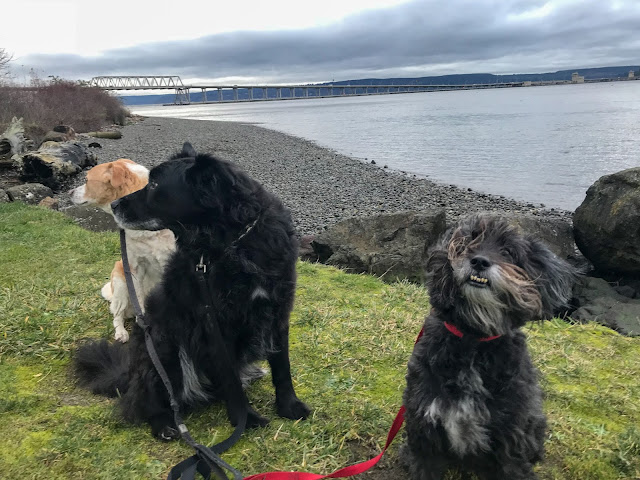 It was a little windy.

After that we drove straight to PA and checked into the Red Lion.  In the morning after taking advantage of the free breakfast we headed to Ediz Hook, a place known for good birding.  Unfortunately when we arrived it was still dark, pouring rain, and super windy. 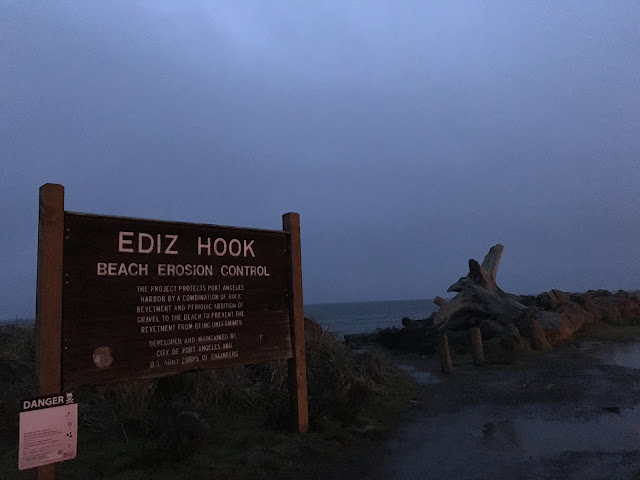 Eventually we decided to get out of the car and give it a go.  It was miserable.  We decided to car-bird instead, and quickly learned that Harlequin Ducks love this spot. 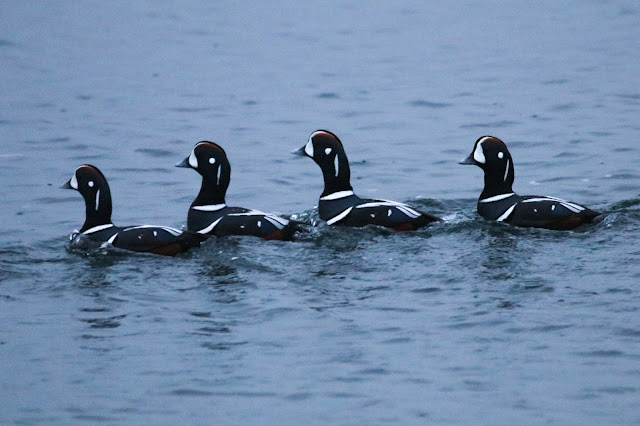 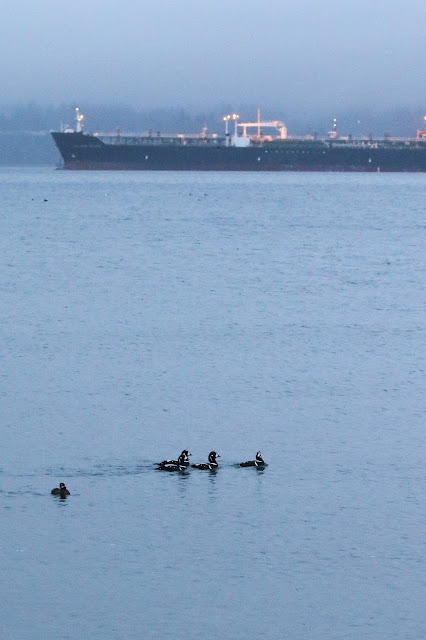 Our main targets here were Long-tailed Duck and Ruddy Turnstone, neither of which we found.  Instead it was a lot of Red-breasted Mergansers, Common Loons, Horned and Red-necked Grebes, Bufflehead, wigeons, Surf Scoters, and a lone Black Turnstone.

We began the long drive home in the pouring rain, which never ended.  We stopped at Dosewallips State Park briefly where we had seen elk last summer, but no mammals this time.  A Long-billed Dowitcher was randomly poking around the grass with the Killdeer though. 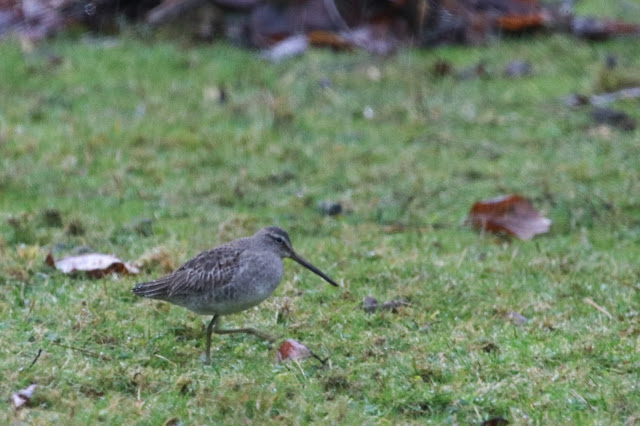 From there we headed straight home, only stopping for snacks and to clean up some dog puke.  It was a pretty successful trip overall, even though the second day was pretty dark and rainy.   Good times and happy new year!! 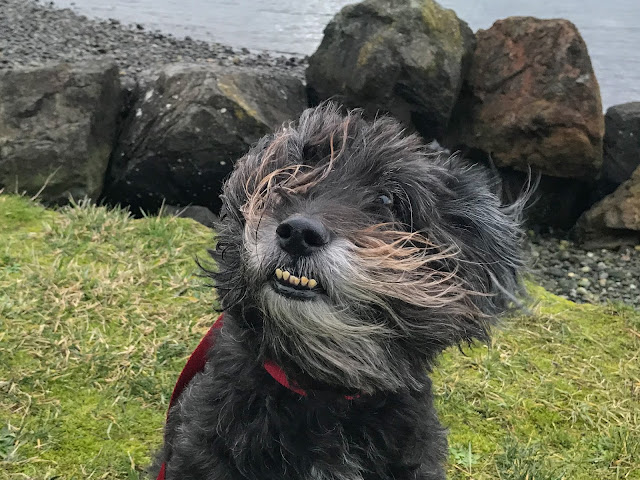