Back in high school and college I kept a little journal of quotes, mostly song lyrics but also lines from books I had read.  I obsessed over them, doodling Kerouac quotes and Bad Religion songs in the margins of my class notes, engraving my favorites into the back covers of my notebooks.  I don't do this much anymore but the lines will still pop in my head at random times. 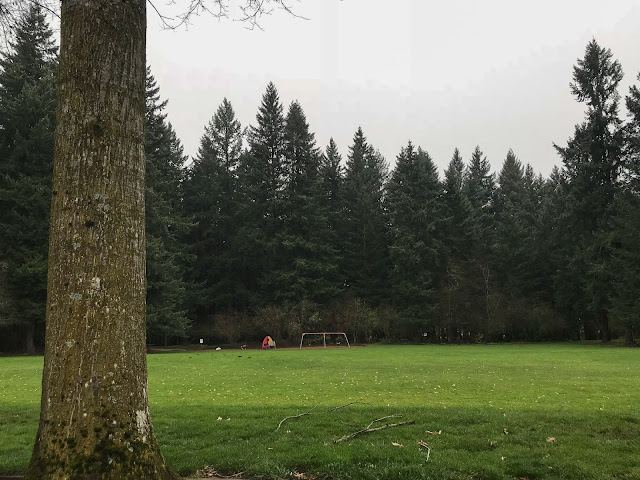 When I first pulled into a parking spot at Orchards Community Park a line from Dostoevsky's Crime and Punishment appeared in my brain, written down back in 1997 or 98 while sharing a dorm room in Boston with one of my best friends, Carrie.  Carrie had to read Crime and Punishment for class, and to be obnoxious and avoid my own homework, I decided to read it faster.  This did not pan out because that Carrie can read so damn quickly (she's now an English teacher) but I ended up really enjoying the book.  This is the line:

Arriving at this random 5-mile radius spot nestled in a corner where the interstate meets busy Fourth Plain Blvd I was intrigued.  I got out of the car and instantly liked the place even though the highway noise was annoying, it was raining, and I was staring at a big lawn.  But.  A Brown Creeper was singing and if your first bird at a spot is a Brown Creeper, how could it be bad? 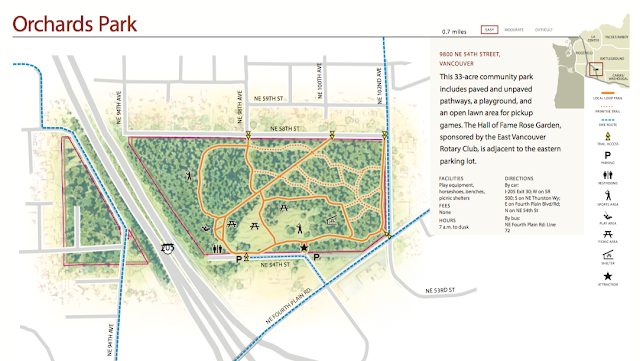 I took the trail past the restroom into the trees and then a little side trail where I started to notice trillium.  Lots of it.  More than I have seen in any other park in Vancouver.  At this point my walk became as much about the plants as the birds. 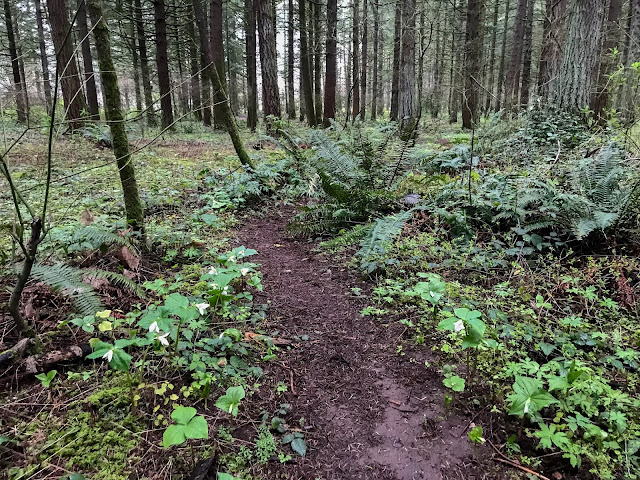 I ended up returning the next (drier) day with Jacob's 100mm macro lens so I could get some better shots of the plants, and this post will be a combo of the two trips. 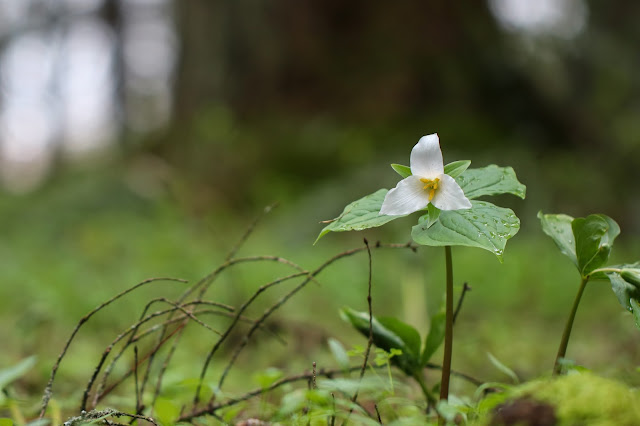 Along with the trillium were lots of other plants, some of which I recognized and some I have tried to look up.  Wild ginger in particular was ridiculously abundant. 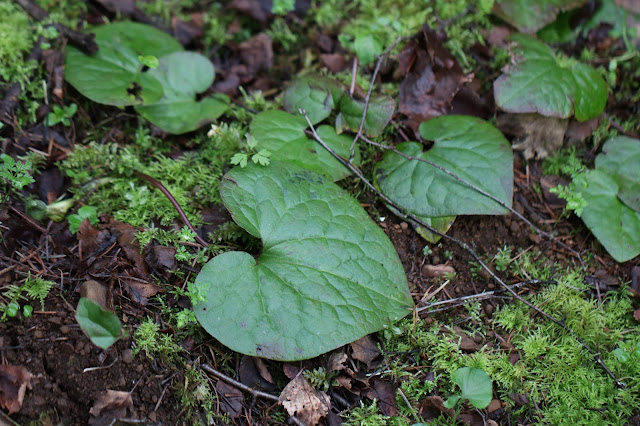 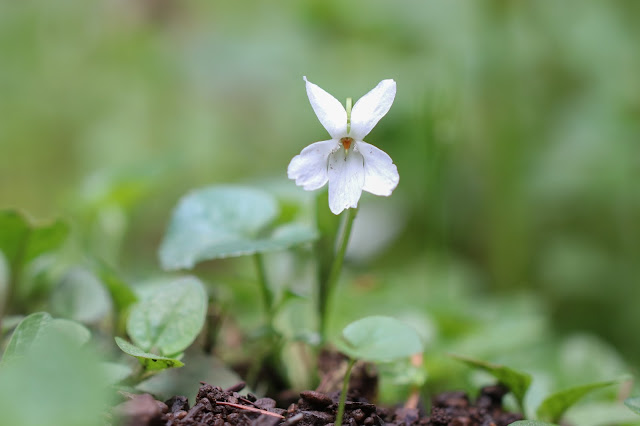 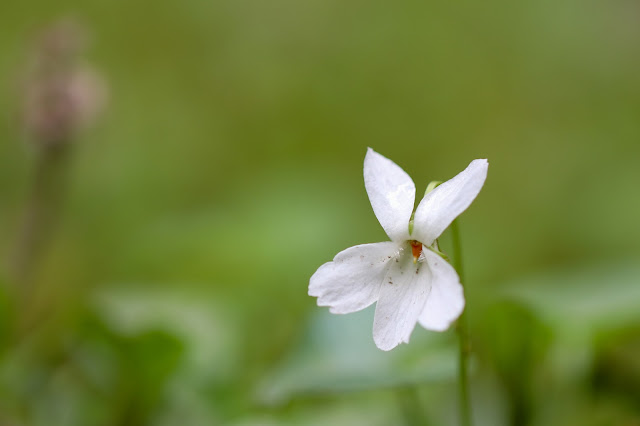 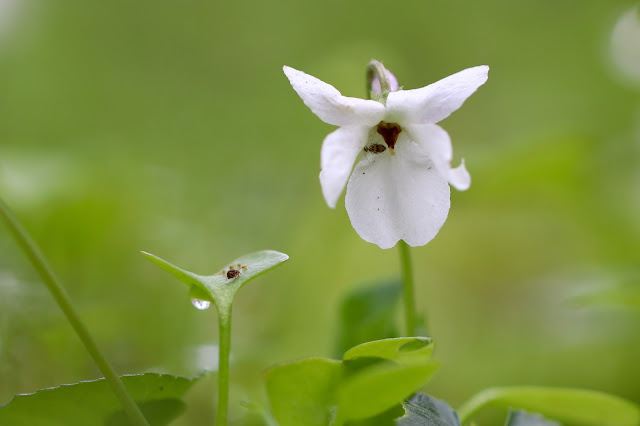 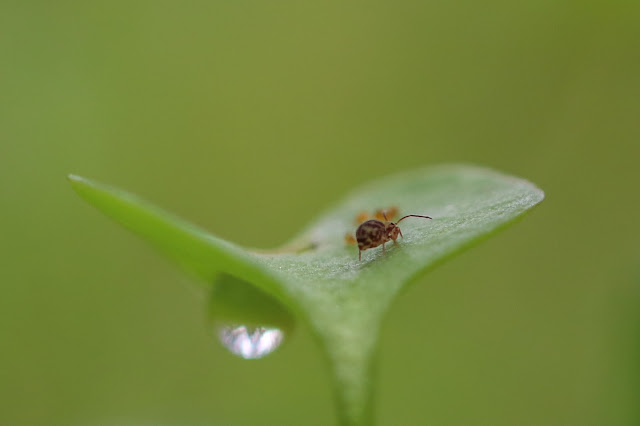 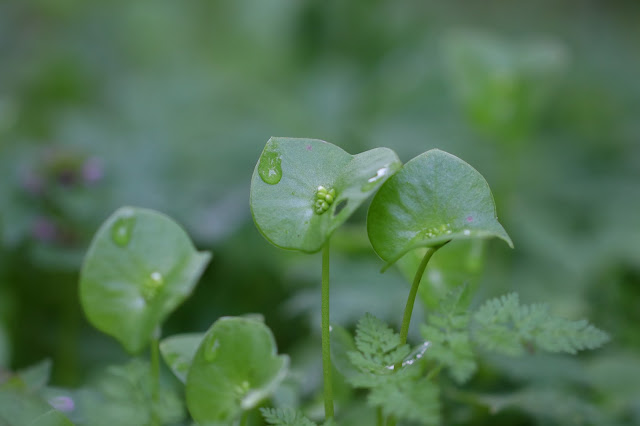 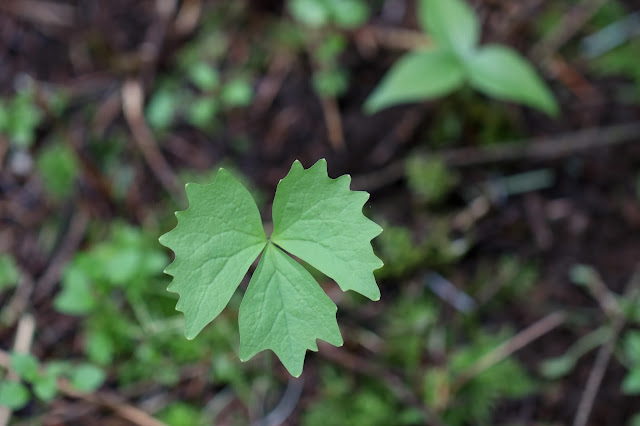 I should know this one 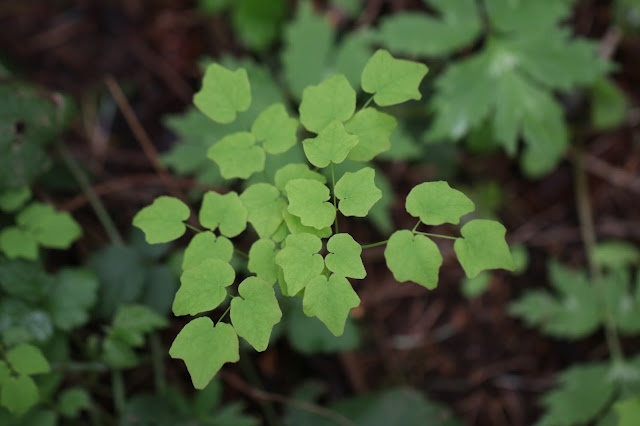 Let's take a break from plants, because plants without flowers are hard to identify.  How about a few birds?  In addition to the nonstop creeper sounds there were the expected Golden-crowned Kinglets, Chestnut-backed Chickadees, Pacific Wrens, Steller's Jays, and so on. 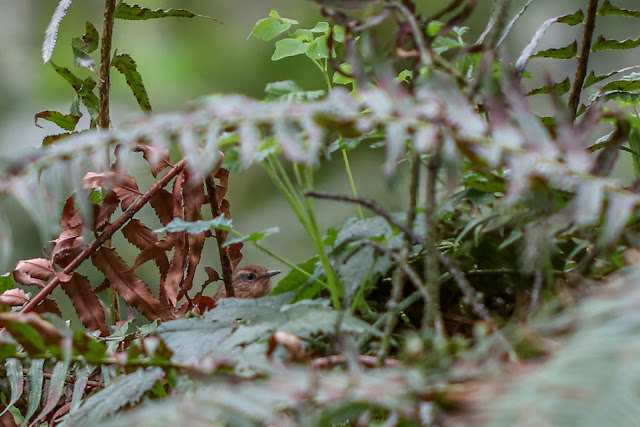 Wren in a fern 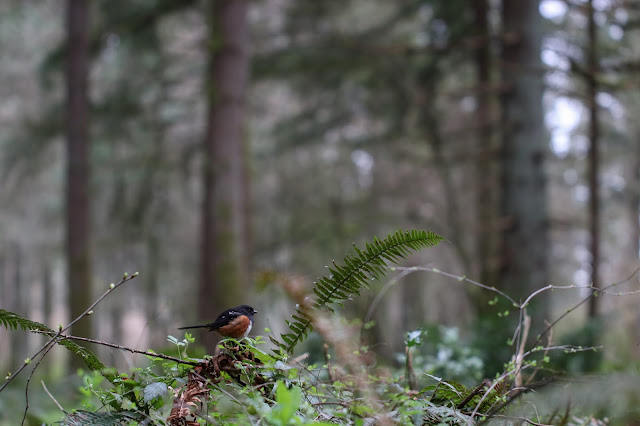 Towhee next to a fern

One small flock of birds contained a pair of Bushtits that were collecting nesting material from under some moss. 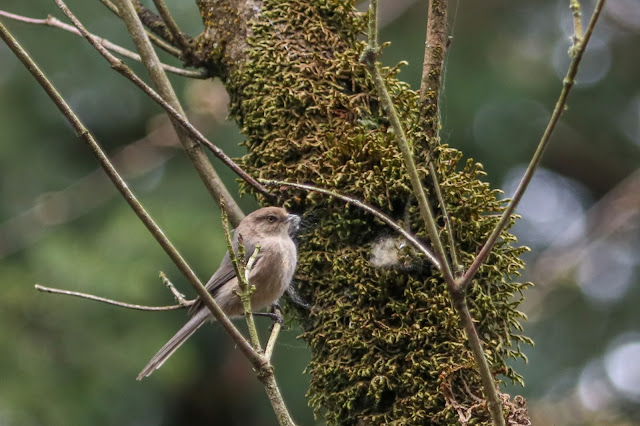 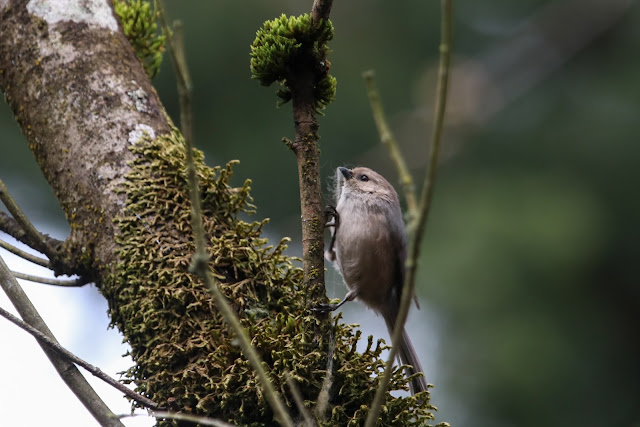 They weren't the only ones working on a nest either.  Crows were flying overhead constantly with their bills stuffed with sticks. 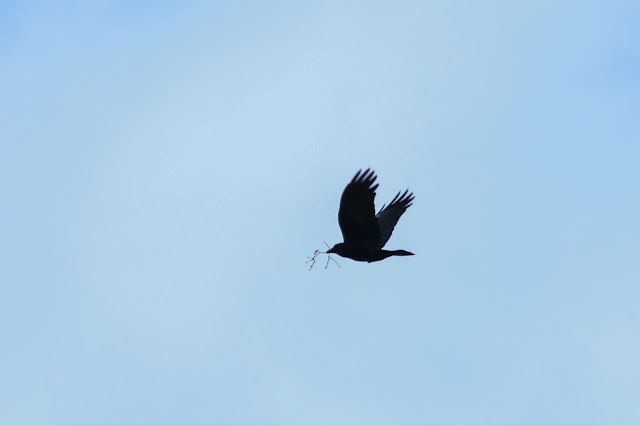 One of the main reasons I chose this spot to visit was because it seemed like ideal habitat for a Hutton's Vireo which I needed for my 5MR.  Indeed, I had one calling on my first visit but never managed a photo.  Here is one from a spot in my old 5MR last week, where they are year round residents: 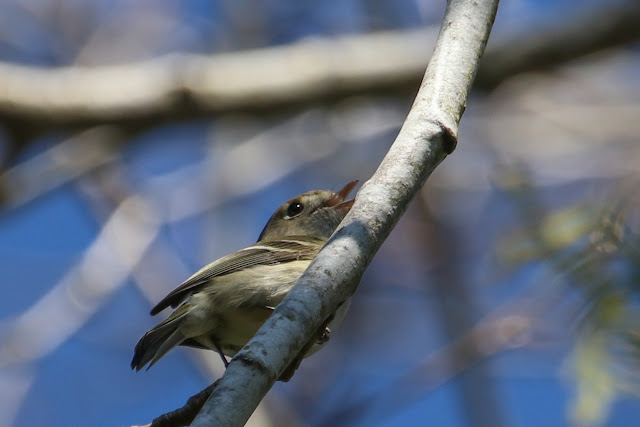 Not far from the Bushtits on the northern edge of the park I found what I think is old coyote poop, full of little bones. 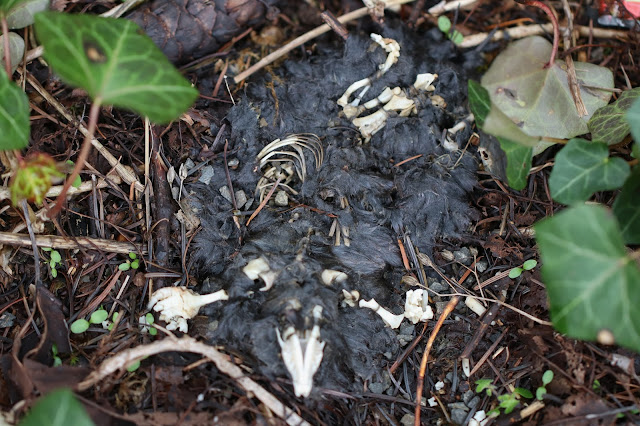 That skull on the bottom was pretty neat, and unlike the usual rodent skulls I find in pellets. 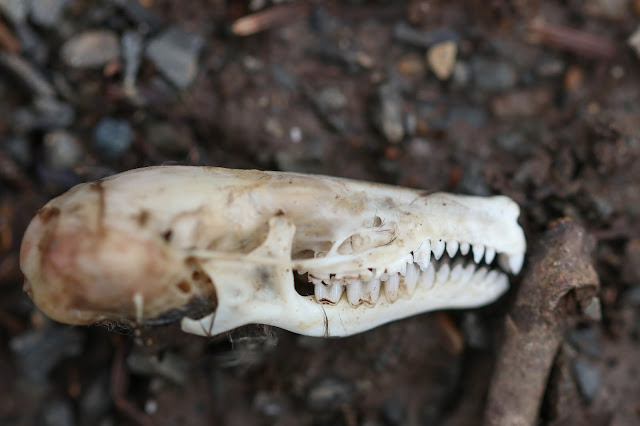 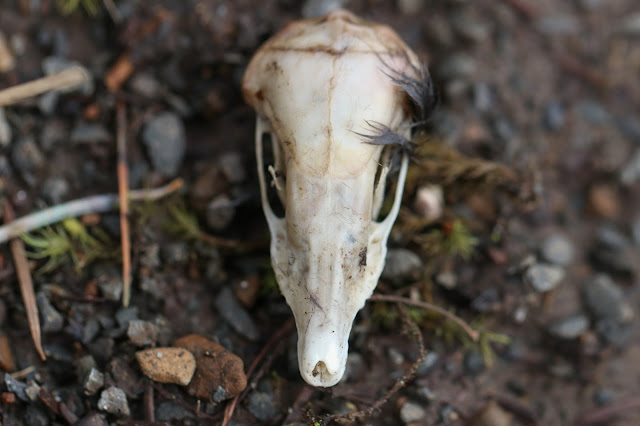 The teeth are distinctive and point to the skull belonging to a mole.  Not surprising given the mole hills in the main field.

The sun came out towards the end of my walk so I decided to check out the random giant patch of Oregon grape planted near the main parking area.  Buzzing insects were enjoying the blooms. 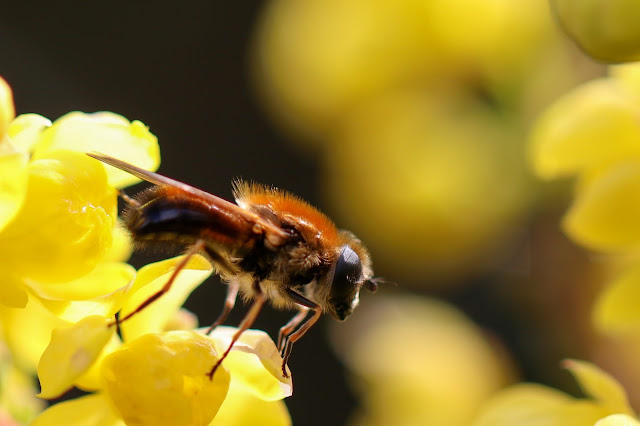 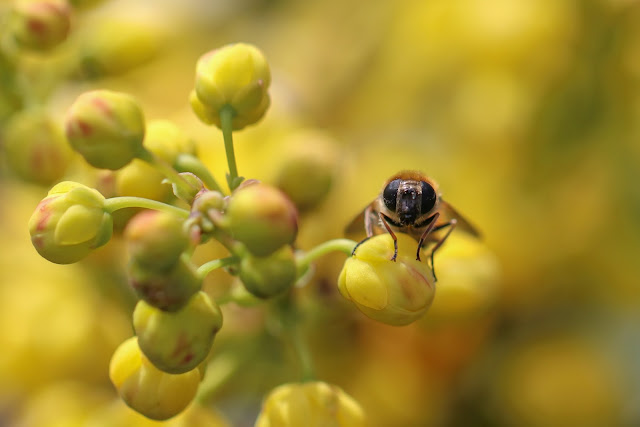 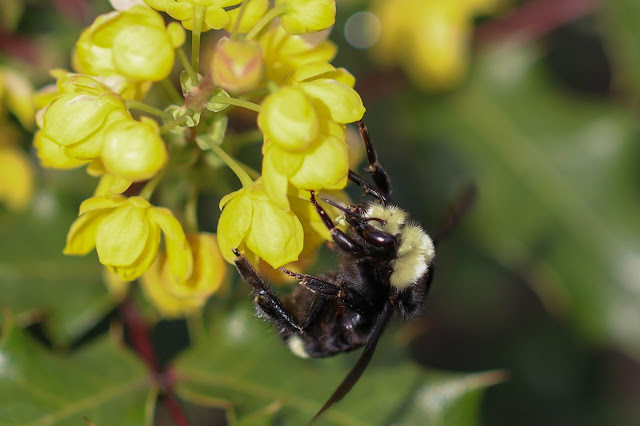 Overall this is an awesome little park, only 2.6 miles from home.  Aside from the interstate noise on the west side of the park, it's extremely pleasant.  There is a lack of water which is maybe why I couldn't find any owls?  I don't know.  Good thing I found one last week. 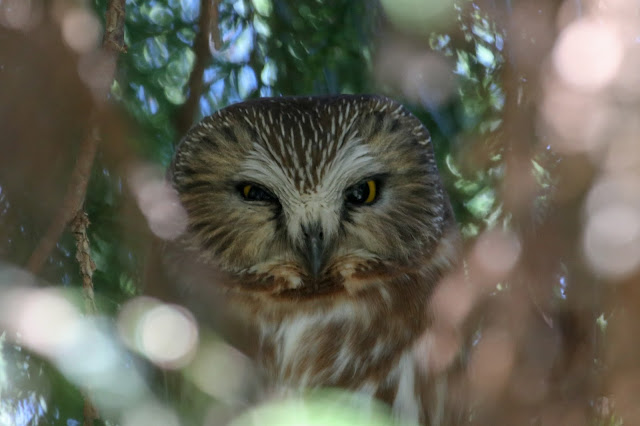 SO GOOD.  Now I must find one in my new 5MR.  Orchards Community Park is probably not a good spot for them, but that's okay because it's good in so many other ways!  Suggest as hotspot?  Yes please!  Good times!!!
Email Post
Labels: Bushtit Hutton's Vireo Northern Saw-whet Owl Pacific Wren Spotted Towhee