This month has been all about year birds and I'm already way above my highest Clark County year list ever (a measly 146 species).  It's been fun to see what's possible here, though I've had my share of misses too (damn you, Black-necked Stilts).  There is a lot to catch up on, let's go!

The Fazio ponds at the end of Lower River Road near Vancouver Lake was one of best county shorebirding spots this spring.  I missed the stilts and Solitary Sandpiper but did find Dunlin, Least and Western Sandpipers, dowitchers, Spotted Sandpipers, and Lesser and Greater Yellowlegs. 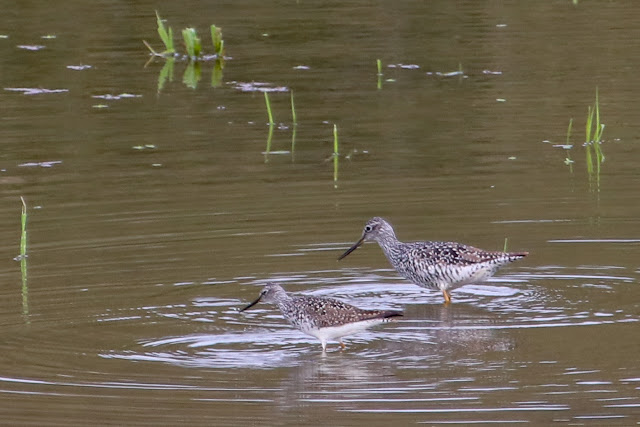 One afternoon on our way out there I may have yelled a little too excitedly for Jacob to stop the car and turn around as there was a Western Kingbird perched on a post.  I thought it was a county bird for me but alas, I had one in the same area 6 years ago. 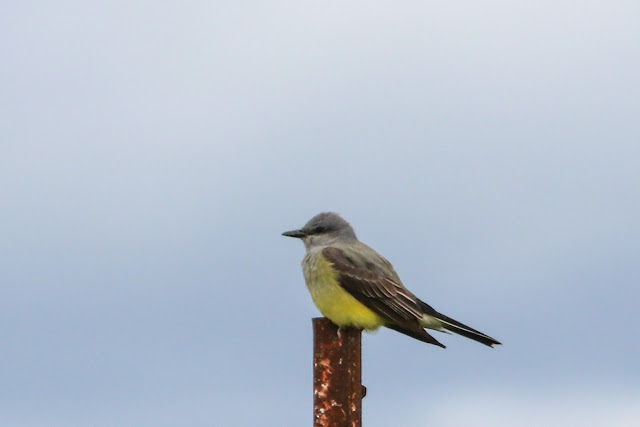 Even still it was a solid county year bird and several other folks were able to see it as well.

I've been trying to visit my favorite 5MR patch, Meadowbrook Marsh, with some consistency and have been rewarded with good migrants. 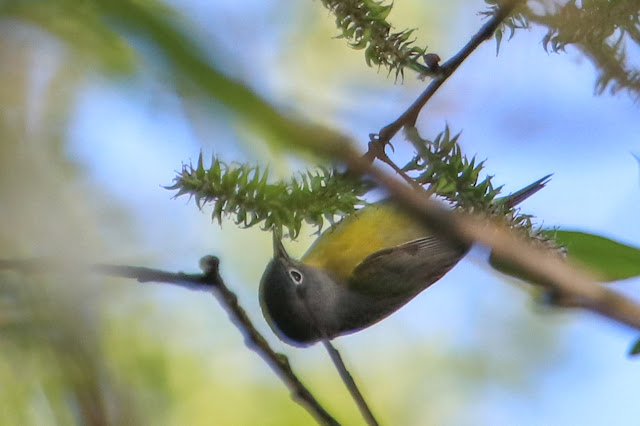 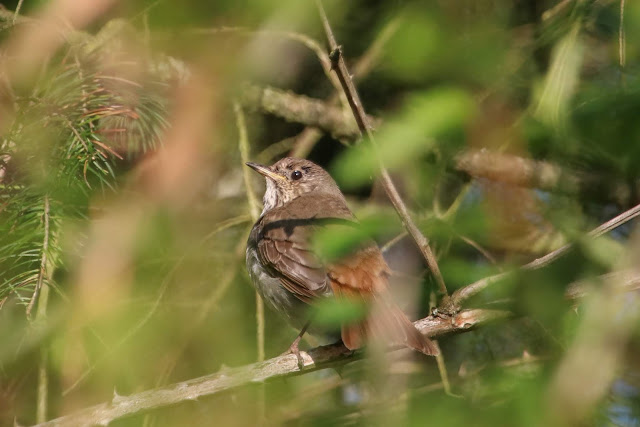 Weirdly I was the first and last person to report Hermit Thrushes this spring and there were only two other people to report one.  They really like Meadowbrook Marsh though, so that's nice.  This one was making strange noises, almost like begging but not quite. 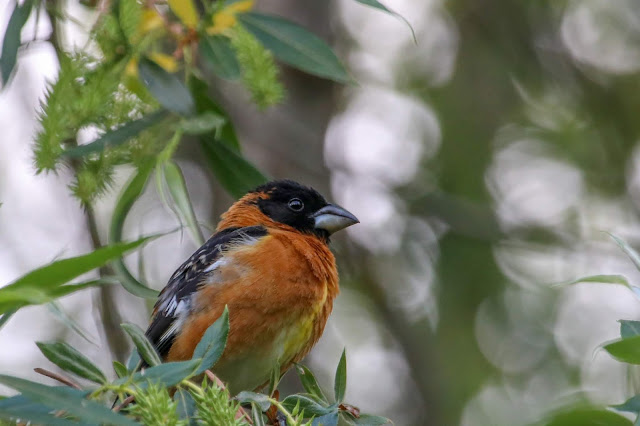 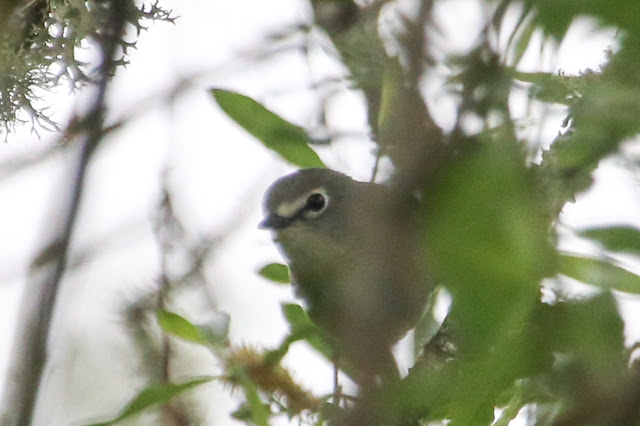 I'm only including this horrible pic because it turned out to be a county bird!  Plus a new 5MR bird.

One morning I decided to check out a new spot for me, the Washougal River Greenway Trail in Camas.  At first it felt a little creepy but within an hour more people started appearing and it was the opposite of creepy.  Whatever that is. 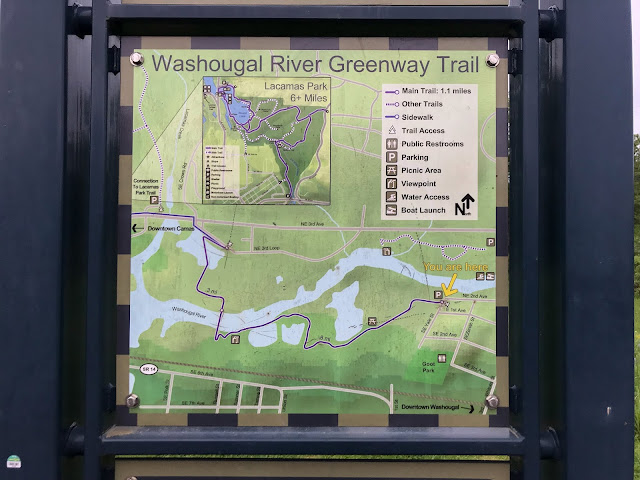 The trail begins in a field of camas and lupine below some powerlines. 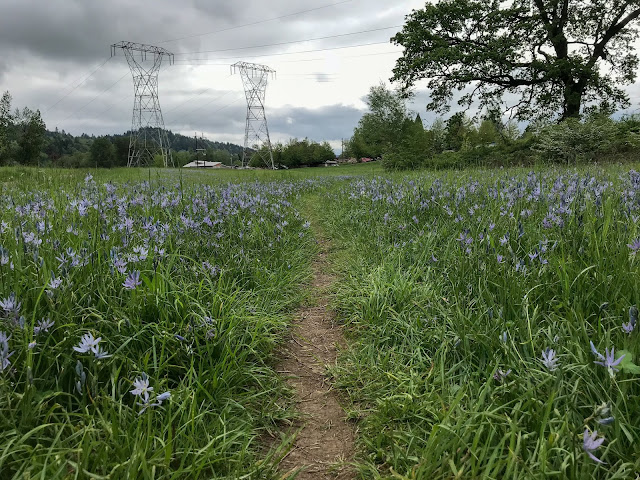 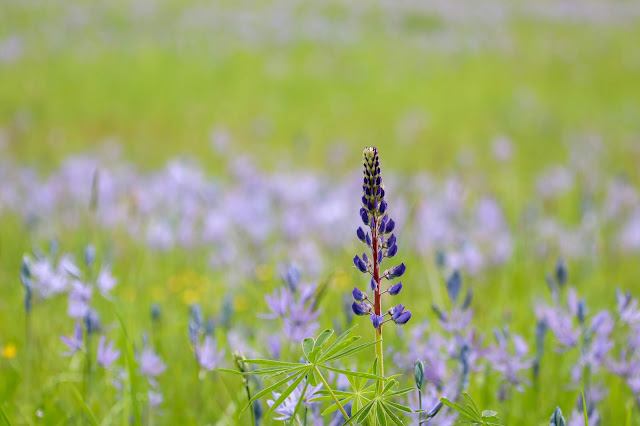 It passes several ponds to a neat big bridge over the Washougal River with rails placed at an inconvenient height for viewing. 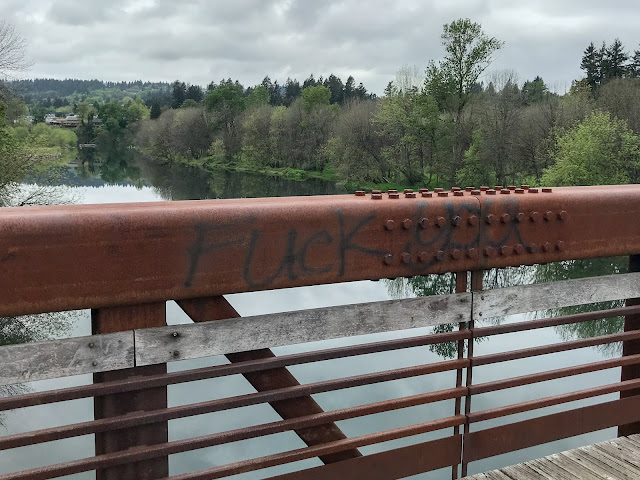 Someone else found them an annoying height too. 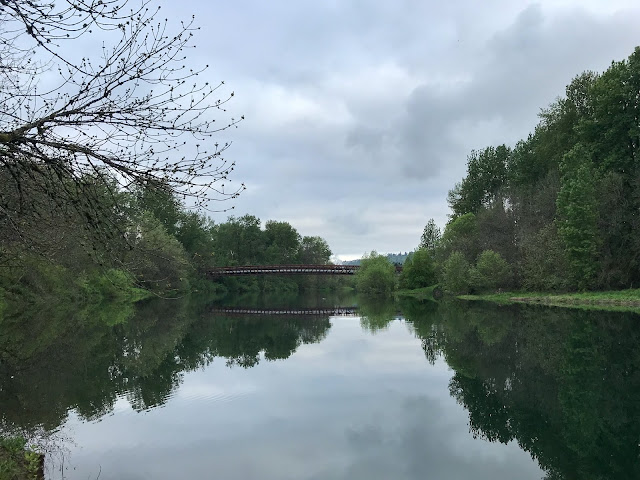 It's a short trail, only a little over a mile, and the final stretch was flooded out.  If it weren't, I believe you could continue all the way to Lacamas Lake which is cool. 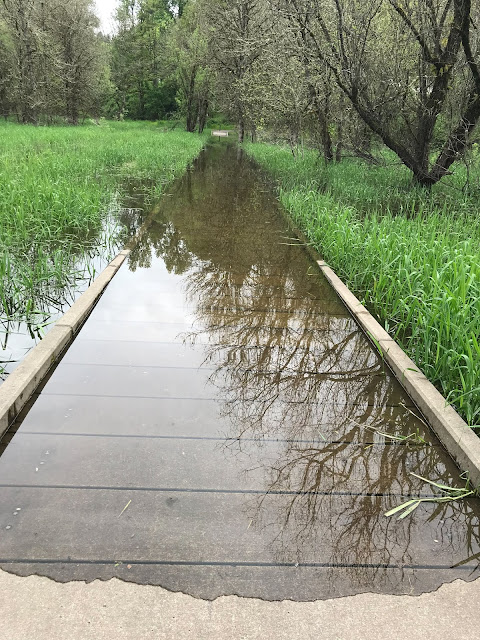 Things were fairly quiet on my walk to this point, but the walk back was birdy.  From the bridge I could look down on a Yellow Warbler singing from the ground. 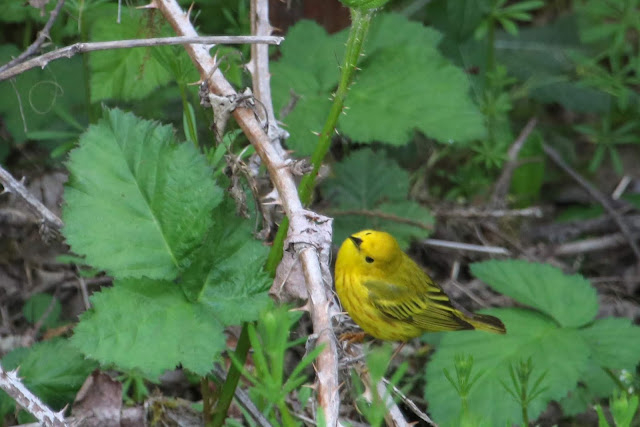 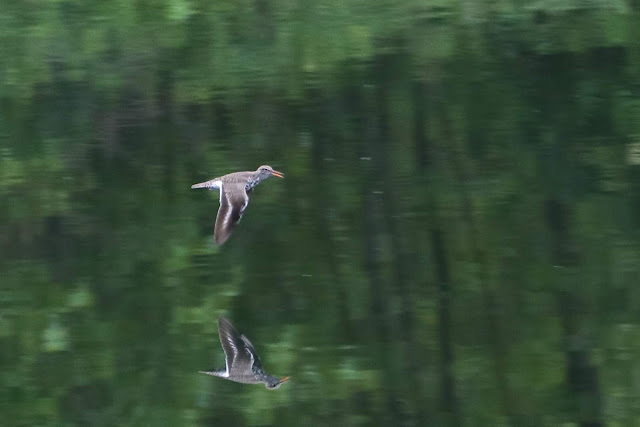 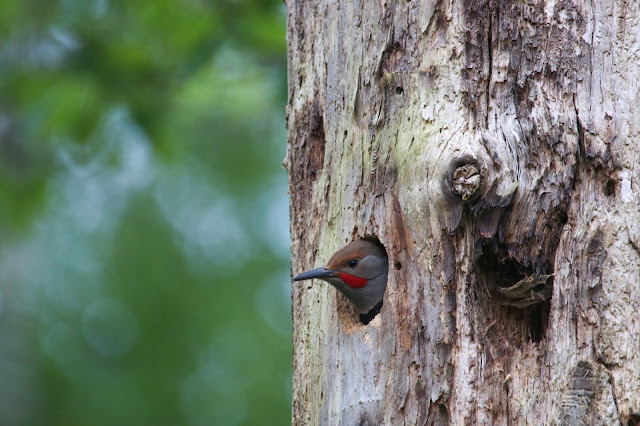 Flicker in a hole

Back at the first pond on the trail I noticed a Hooded Merganser, then his lady friend appeared and flew up to a stump (right side of photo below).  Next to a big hole.  Could they be nesting here?  Is that hole big enough?  I need to go back and check for adorable merg babies. 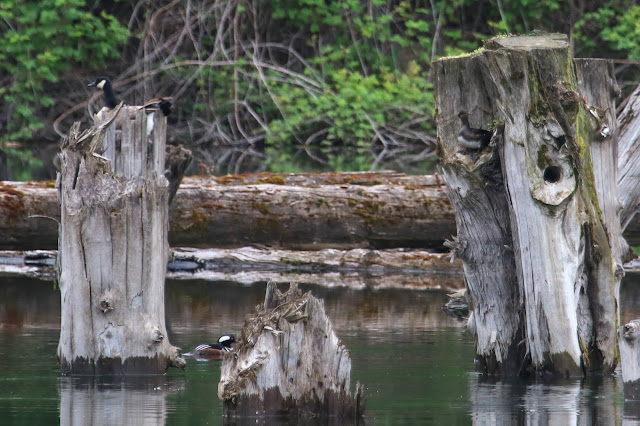 And on my way out I stopped for bumblebees flying around the camas. 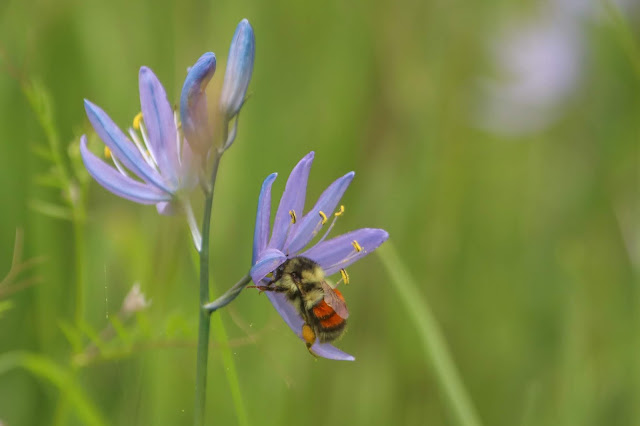 I have also hit up Ridgefield and Frenchman's Bar this month with more good migrants like everyone's favorites:  Western Tanagers, Bullock's Orioles, and a Lazuli Bunting. 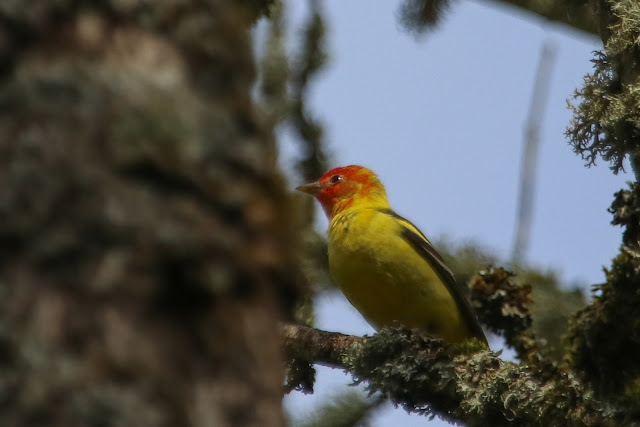 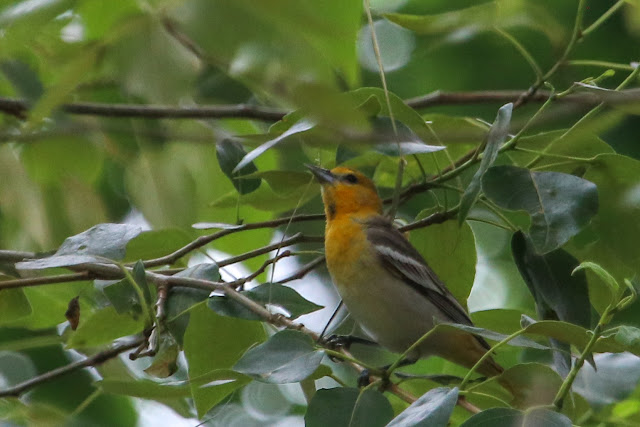 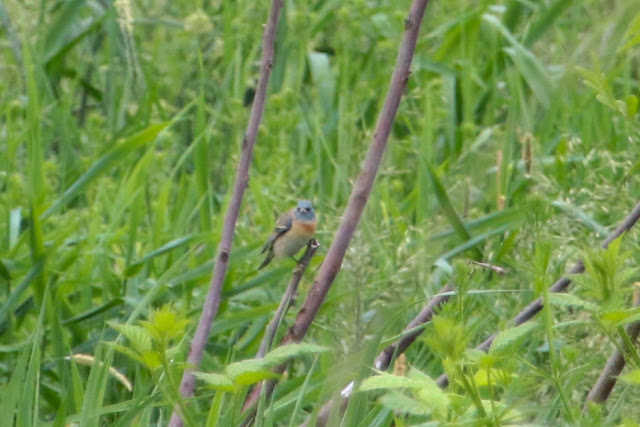 I also had Swainson's Thrushes and a Western Wood-Pewee at Frenchman's Bar.  The gang's all here!  Not many migrants left at this point, only Willow Flycatcher comes to mind.