on July 16, 2018
Well.  Blogger decided I did not actually want to write a blog post about the birds I have seen over the last few weeks and deleted the whole thing.  I will take that as a hint and write about the hike I did this week in the Gifford Pinchot National Forest instead.  Perhaps if this gets deleted I will try a post about the various bugs coming to the porch light, or a post about how many times a day Ralph tries to lick Jake's weiner.  I dunno.  Throw some shit on the ceiling and see what sticks, right?

Anyway.  I decided to check out the trail to Grassy Knoll, a 3648 foot hill that once hosted a fire lookout.  My original interest had been in Big Huckleberry Mountain but I decided with time constraints (and my slow flower-poking pace) a 12-mile hike would not work out.  Grassy Knoll is less than five miles round trip which leaves plenty of time to look at stuff. 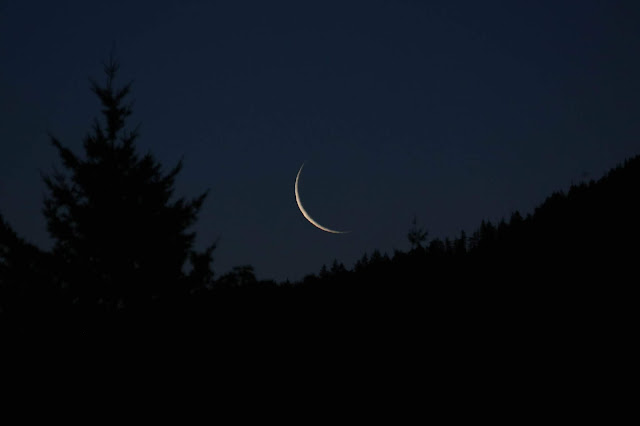 I got an early start on the 2-hour drive because I happened to wake up early and the day was supposed to get HOT.  The sky was brightening over Cascade Locks when I passed the Bridge of the Gods so I stopped at the lookout for a few minutes. 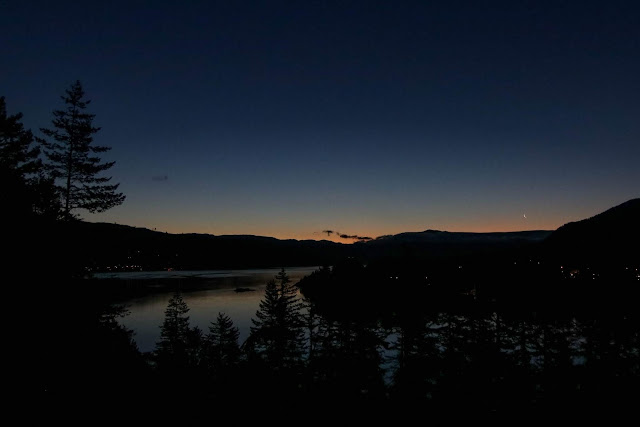 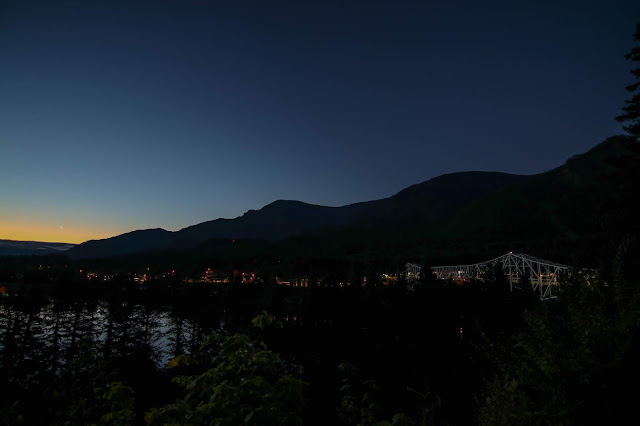 Bridge of the Gods, where the Pacific Crest Trail crosses the Columbia

After turning off the main road in Carson I did not see another car, or even another person till I was driving back hours later.  It's about eleven miles of bumpy potholed forest roads to the trail head which may explain the hike's unpopularity. 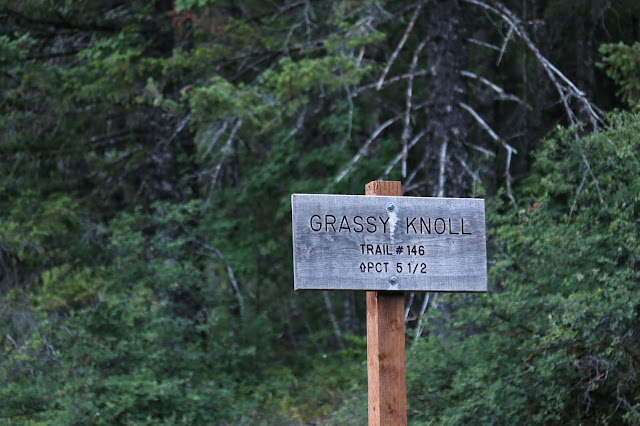 I began the hike in wildflower mode with my macro lens on so I didn't capture the Gray Jays that flew low over me, checking for snacks.  Instead I captured some tall buckwheat. 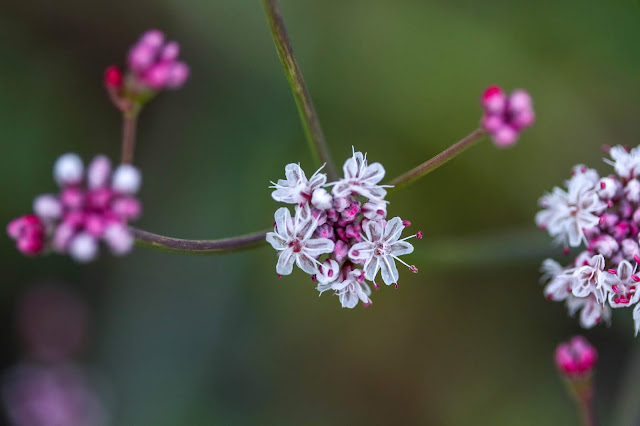 Once into the woods the trail starts to climb but it's not as bad when you stop to look at flowers every 20 feet. 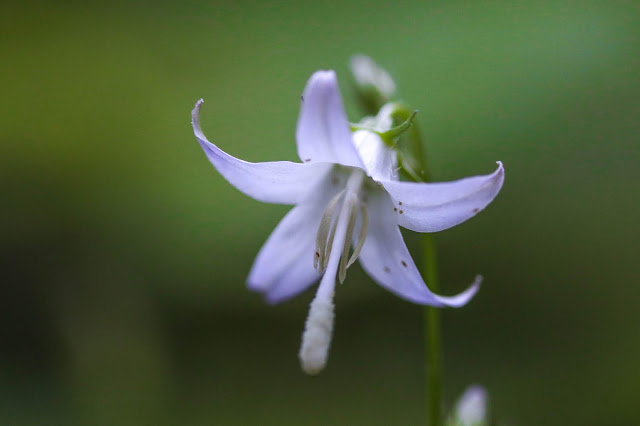 As I was starting to get my first good views through the trees I also started to hear birds.  A few Red-breasted Nuthatches were piping up along with Chestnut-backed Chickadees and others.  Who doesn't love a flock?  So I switched out my lens for my bird nerd lens and caught the first bird I saw. 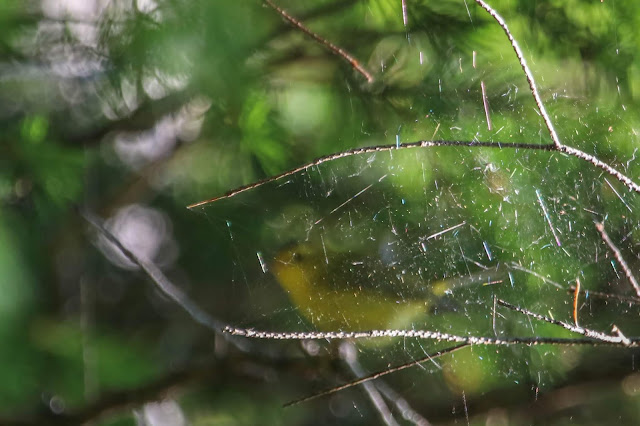 Wilson's Warbler with a spider web to protect it from overeager photographers.  The flock was moving around and I kept finding new birds in it. 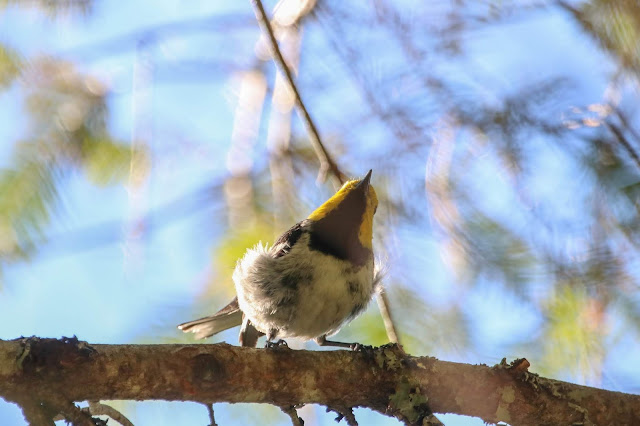 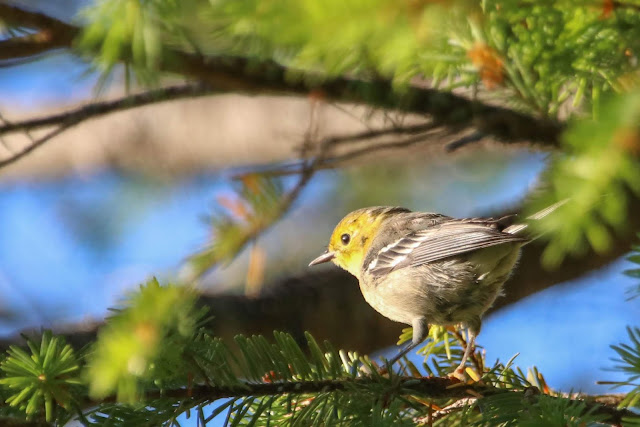 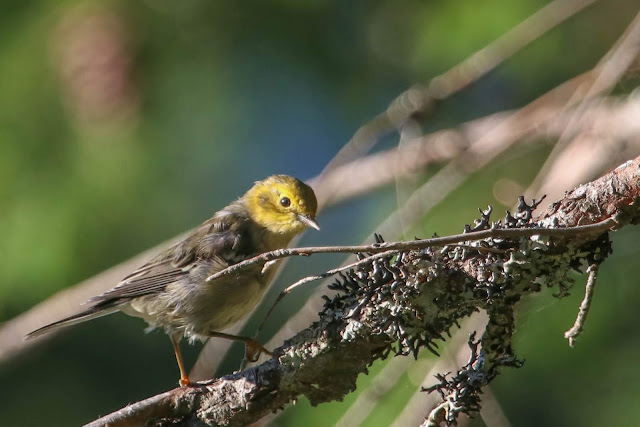 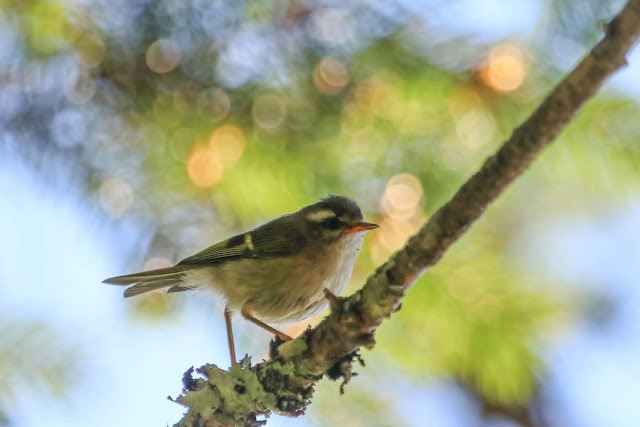 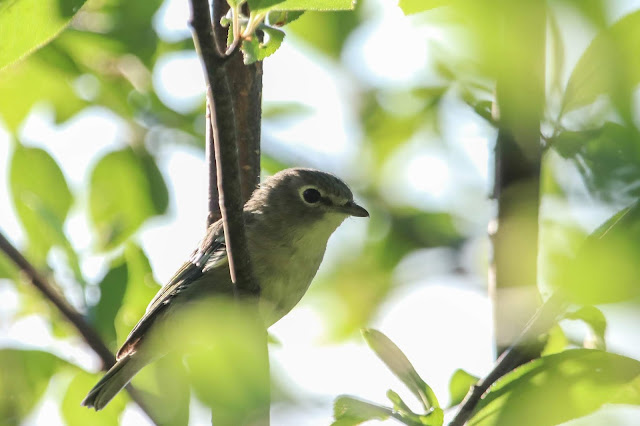 I could hear a Band-tailed Pigeon calling but didn't see it until I hiked up further and the trees opened up. 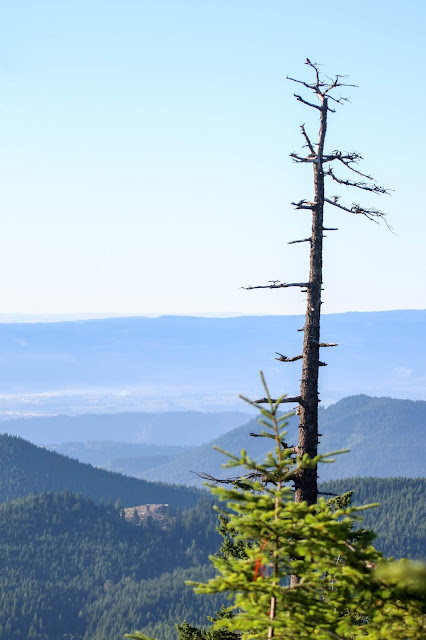 The trail led to some rocky outcroppings which offered amazing views to the north and east, plus wildflowers. 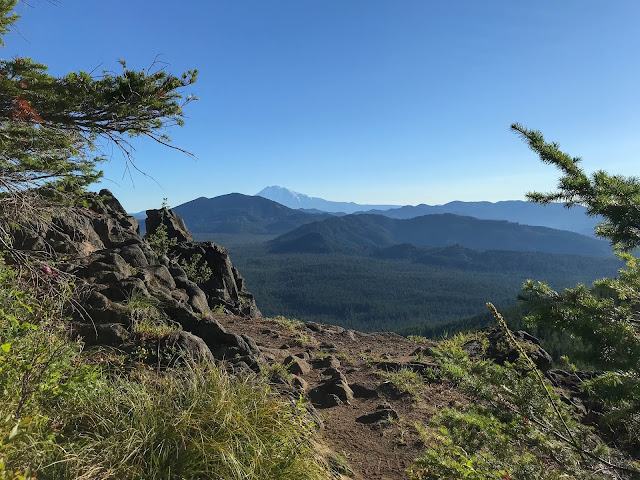 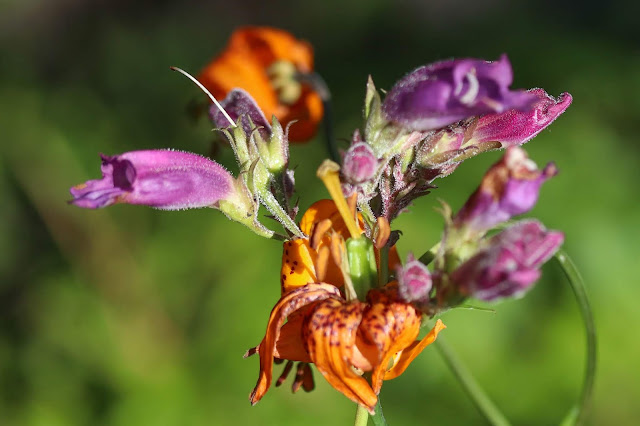 A mess of Woodland beard tongue and Columbia lilies

Back in the woods some more wildflowers distracted me, like this foamflower. 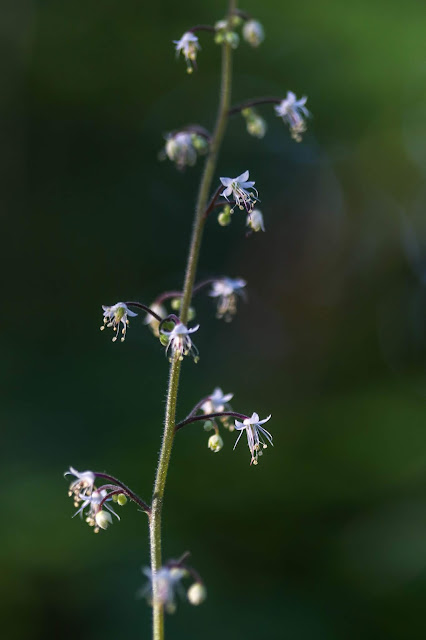 Eventually the trail came back out from the trees for a minute and I got my first look at Grassy Knoll. 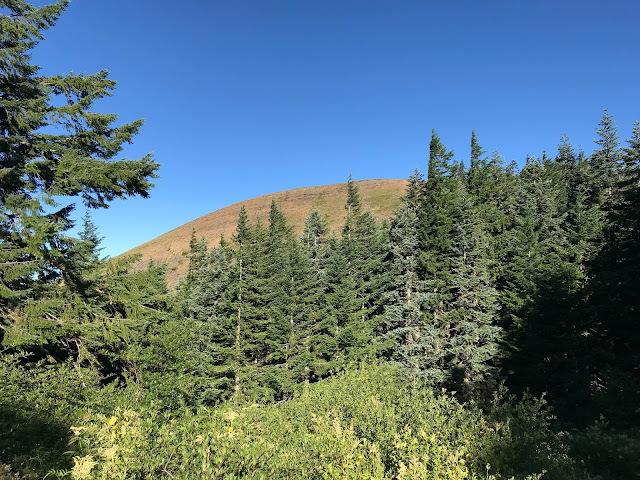 Back through some more woods and the trail pops out at the bottom of the hill with some sweet views of Mount Hood to the south. 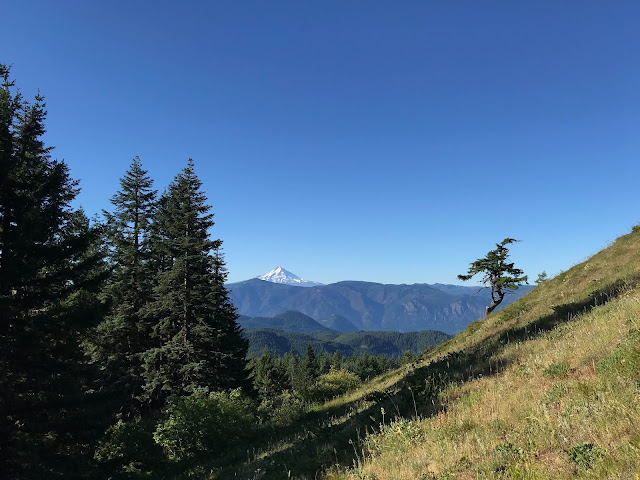 At the top I found my first Skamania County Chipping Sparrow which was not very exciting at all. 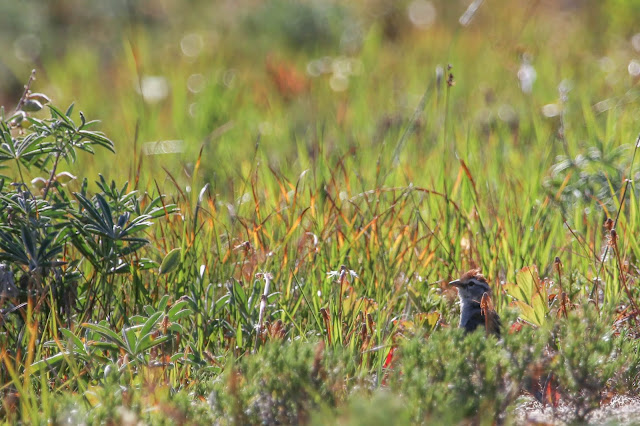 The remains of an old fire lookout are at the top as well. 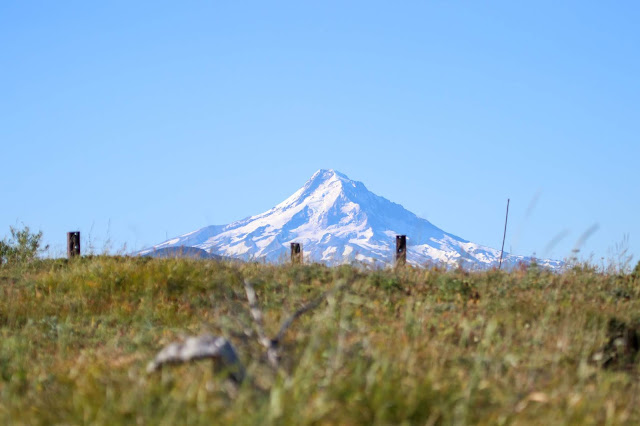 There are great views to the southwest of the Columbia River Gorge including the Bridge of the Gods. 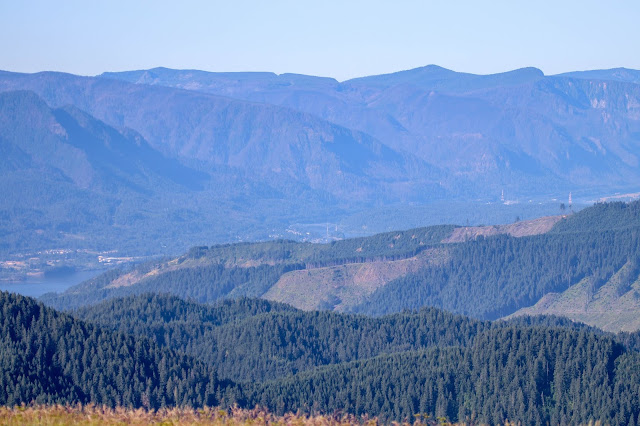 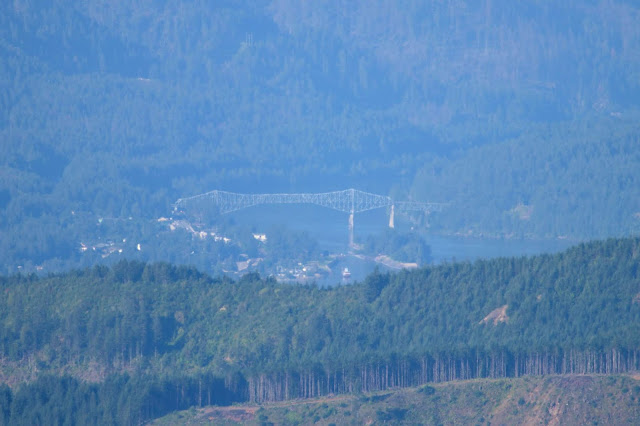 According to the Washington Trails Association website I should have hiked another mile for more wildflowers, but I didn't know about that at the time.  Instead I turned around and began the hike back and MacGillivray's Warblers started appearing and disappearing. 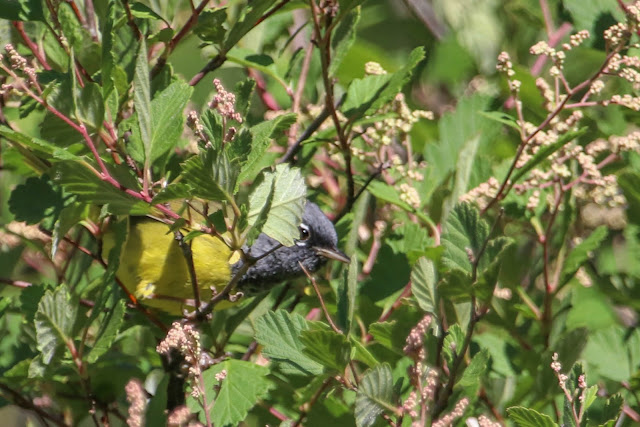 In one of the open sections of the trail a female Rufous Hummingbird was guarding her domain of wildflowers.  She had some pollen-chin going on that I think adds some spice to her look. 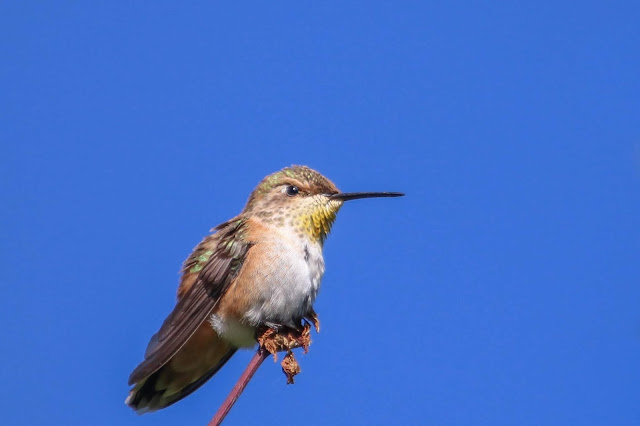 I watched her chase away other hummers but she seemed okay with this swallowtail enjoying the same Columbia lily she had been enjoying earlier. 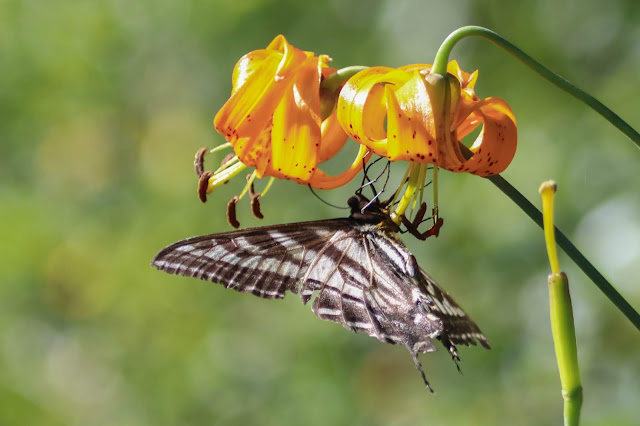 I found a really cool ichneumon wasp on the way back also, with the craziest ovipositor I've ever seen. 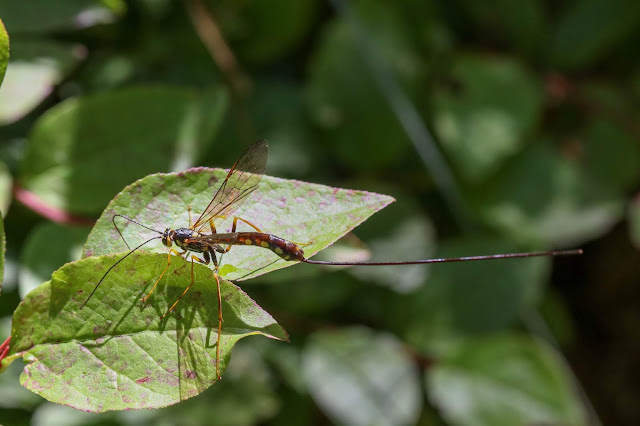 I made it back down the trail to the field at the trail head where a Peregrine was perched.   Wrong lens, wrong settings, no photos.  The 11 miles of potholes were just as fun on the way down but again, no people.  I finally encountered another car about half a mile from the main road.  Pretty sweet!

Overall, I loved this hike because it seemed to have a little of everything.  Good times!! 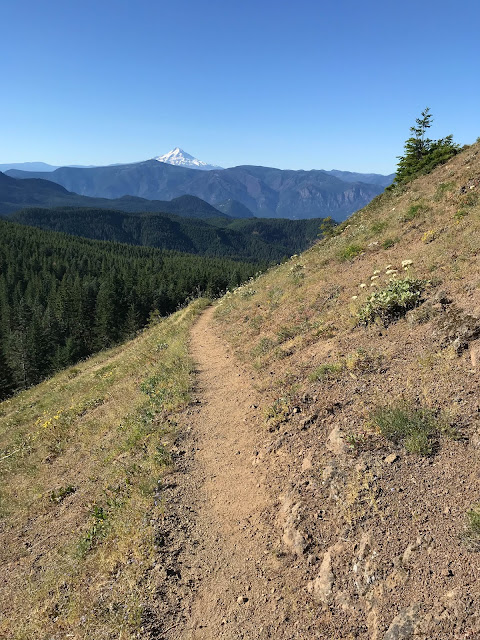