on September 04, 2018
Finally!  As much as I love my chickadees and Song Sparrows, I am thrilled for fall migration to be in full swing.  Shorebirds and warblers have been moving through and it is that time of year when anything seems possible.  There are certain local birding spots that will need to be in heavy rotation for the next couple months so as not to miss anything.

First off, my patch!  I went out to Meadowbrook Marsh last week and enjoyed the nonstop bird activity. 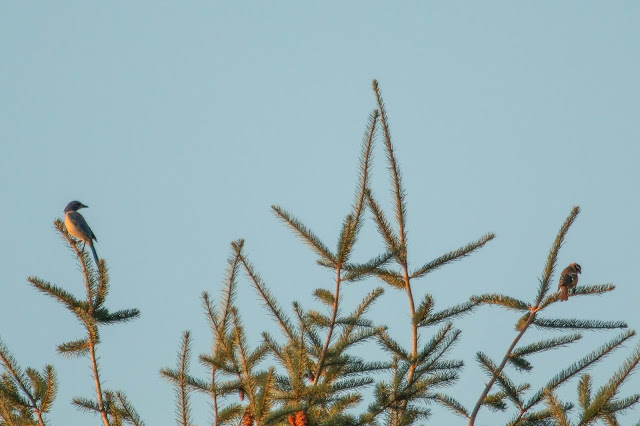 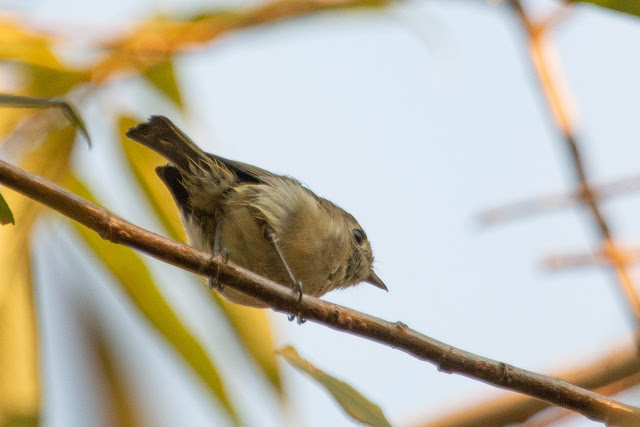 A better birder could probably identify this thing. 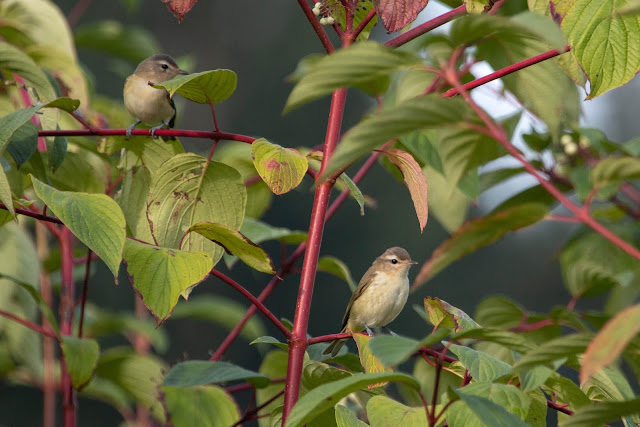 Warbling Vireos with the bluest legs! 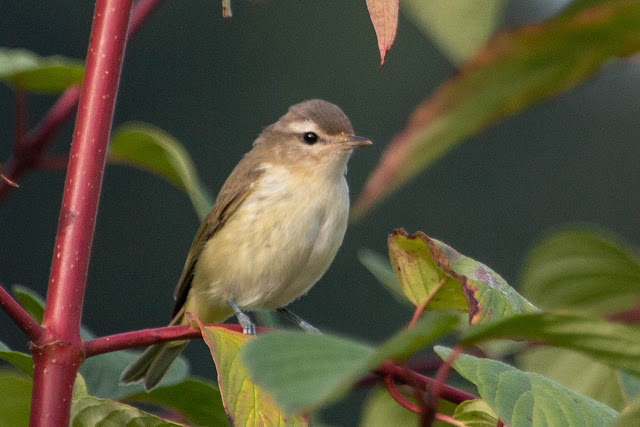 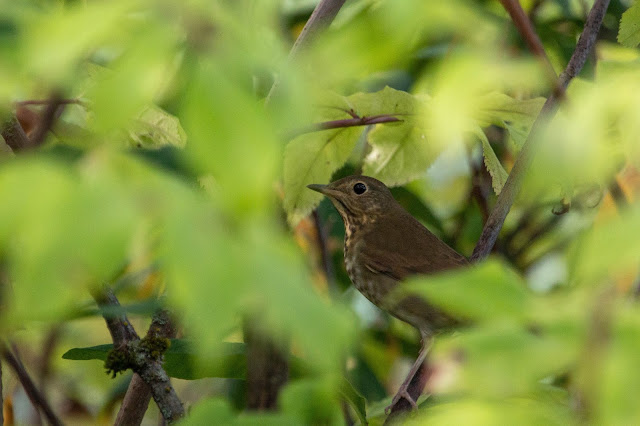 Swainson's Thrush, a new one for me at the park 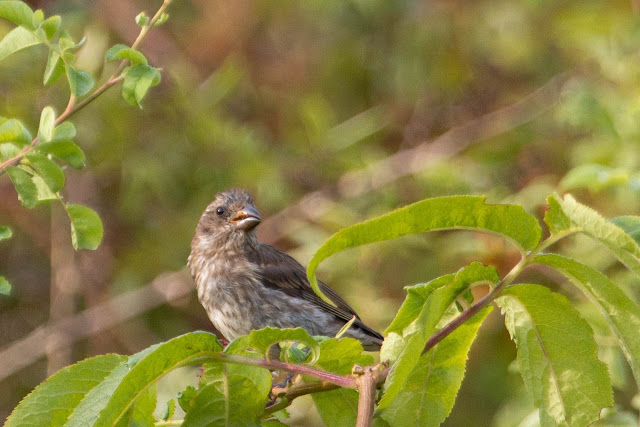 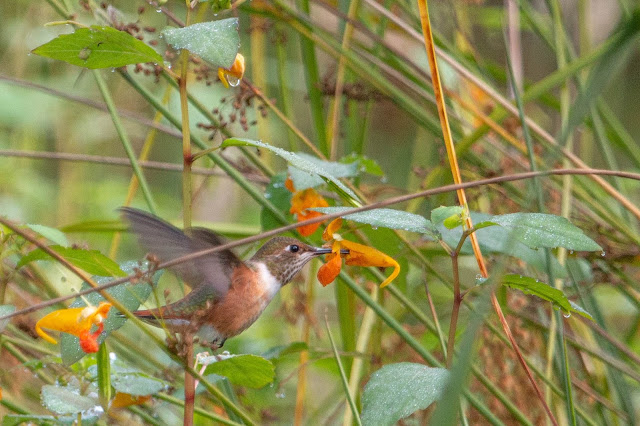 At one end of my patch there's a big fenced off area with a greenhouse where the parks people grow many of the native plants for Vancouver parks.   Surrounding the fence they planted a ton of sunflowers, cosmos, and other plants which are loved by the goldfinches.  I reported 25 Lesser Goldfinches which eBird did not appreciate.  The truth hurts. 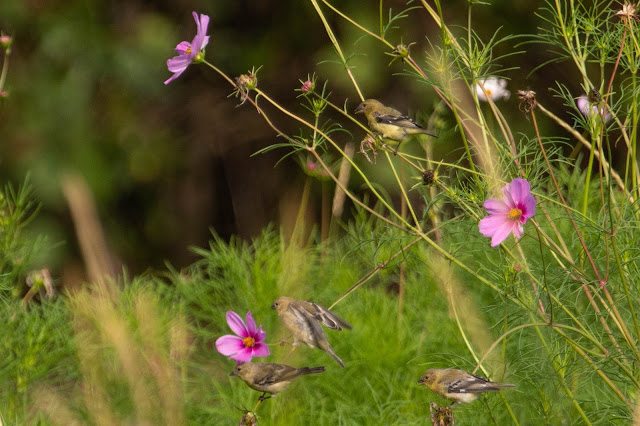 On this morning I also had Orange-crowned, Yellow, and Wilson's Warblers, Western Tanagers, a Cooper's Hawk, as well as all the resident birds.

A second area that needs to be birded regularly now is the Vancouver Lake/Shillapoo Lake are where the "good" shorebirding is in the county, plus potential for interesting gulls, terns, grebes, and loons.  Jacob and I went out to Shillapoo Sunday morning and quickly found a couple of Pectoral Sandpipers. 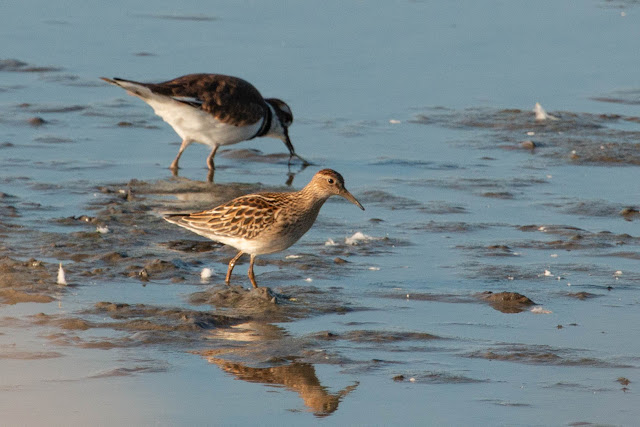 This is not a rare bird, but it's a bird I had only seen once before in the county.  We could see there was more potential for shorebirds farther along the trail but we had to cut it short because I had to work that day.  We decided to return yesterday (Labor Day) to see if anything else could be found.

We first found a couple local birders, Jim and John, who had not seen much beyond one Pectoral Sandpiper still around.   After they left we started walking up the trail when a small gull flew in.  In early September this could be very exciting, though this one turned out to be a more common Bonaparte's Gull.  Since I had only seen my first one in the county earlier in spring I was not that disappointed. 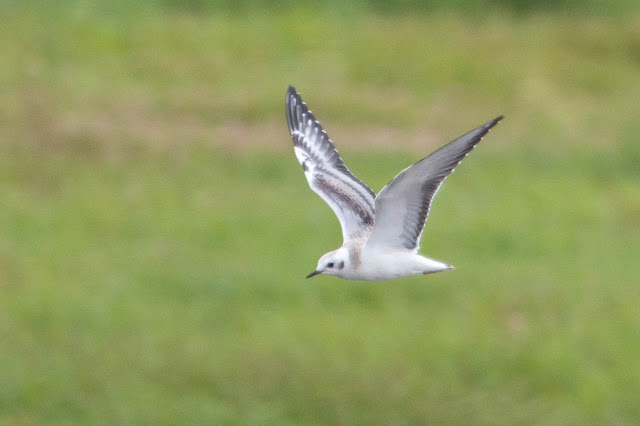 We couldn't find anything else interesting there so we headed to the end of Lower River Road to check another shorebird spot.  As we pulled up we heard four gunshots and watched a kid (13 years old?) run to grab a Eurasian Collared-Dove thrashing on the ground.  This was only about 20 feet from the road.  Nope.  We turned around and drove to Vancouver Lake where Jim and John had seen a Red-necked Grebe earlier in the morning. 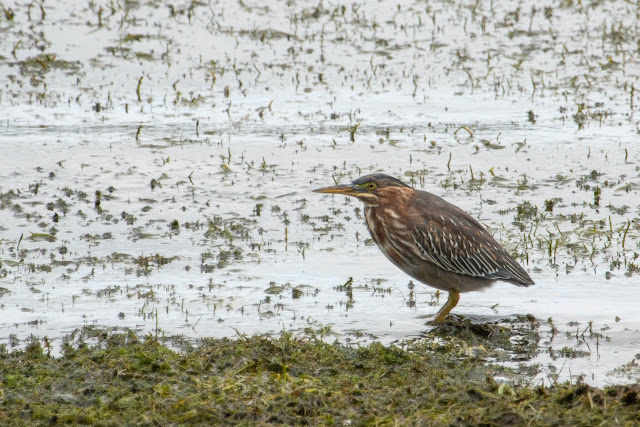 This Green Heron was standing on the shoreline between groups of fishermen, making up for the lack of grebes to be found.

The third and final area that is worthy of regular visits now is the Columbia River, best accessed from Marine Park and Wintler Park.  A nice paved path connects the two and makes for a good walk.  This time of year there is much potential for interesting terns, scoters, grebes, loons, gulls, and jaegers.

Last week I stopped there and the most interesting thing was an Osprey with a big fish, chowing down super close to the path. 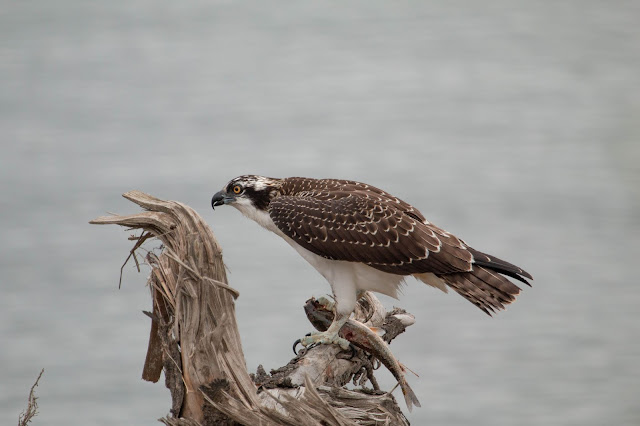 When I walked back a bit later it had eaten most of it and took a quick poop break. Yep. 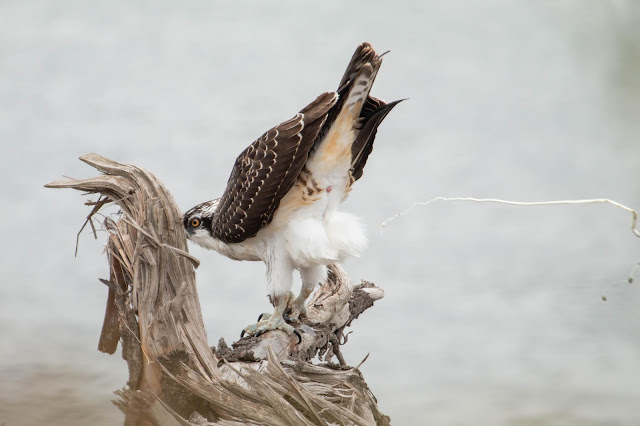 Yesterday after a lunch break Jacob and I went out there to look for Caspian Terns, a county year bird we both needed.  It was super sunny with lots of people out and about because of the holiday and weather so expectations were fairly low.  We walked out on the little jetty next to Tidewater Cove Marina when Jacob spotted birds in the water:  three Red-necked Grebes! 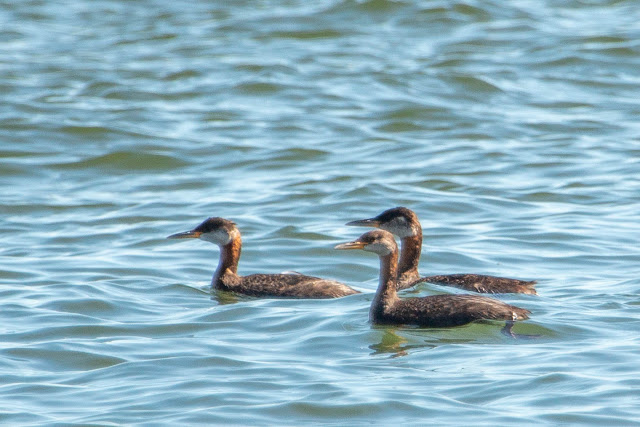 After dipping on this bird earlier in the day it was awesome to find three in our 5-mile radius!  We watched them for a long time from a shady spot under some shrubs on the jetty. 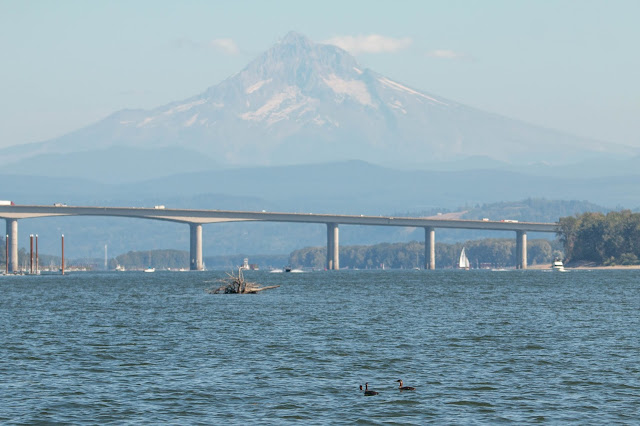 Red-necked Grebes with Mount Hood and the Glen Jackson Bridge

As they began to dive more regularly we noticed if one popped up before the others it would start to call loudly. 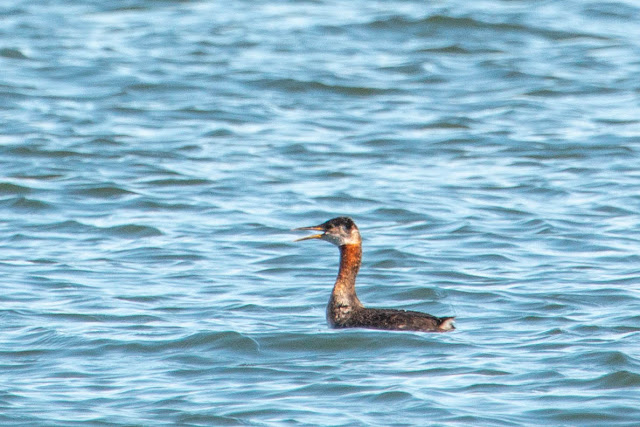