on September 15, 2019
A couple weeks ago Jacob brought our kayaks out to the new house, located less than a quarter mile from a boat launch on Devils Lake.  Our first time kayaking on the lake went well with a lovely sunrise and even a county bird. 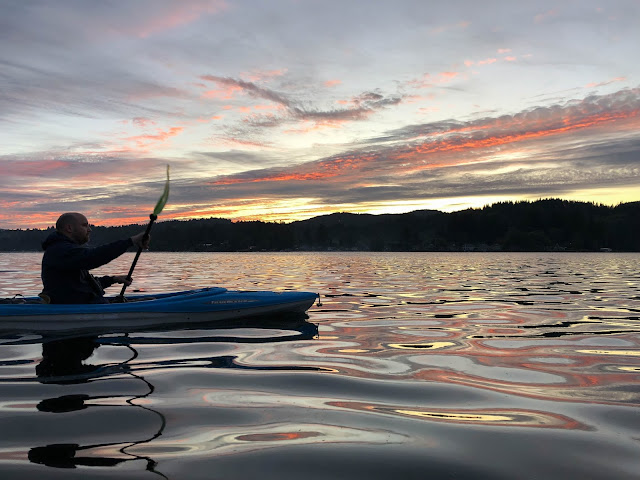 We kayaked south from Holmes Road Park and made it to Regatta Park before turning back north. 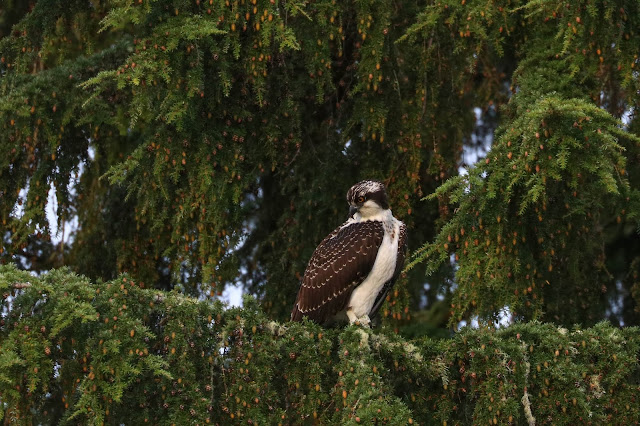 Someone's yard has a little peninsula with some trees and nice shrubs that happened to be packed with birds, mostly Yellow Warblers and Chestnut-backed Chickadees.  The warblers were flying down to the edge of the lake to drink and bathe. 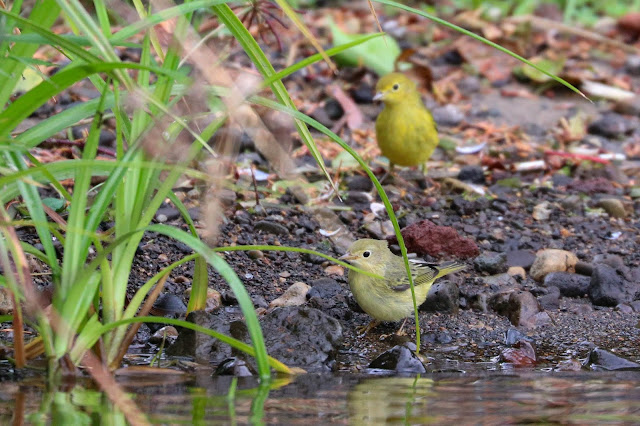 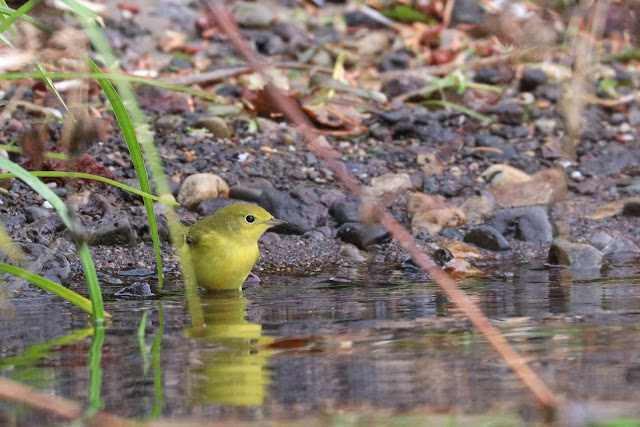 As we paddled back into the boat ramp area we flushed a Spotted Sandpiper, a surprise county bird. 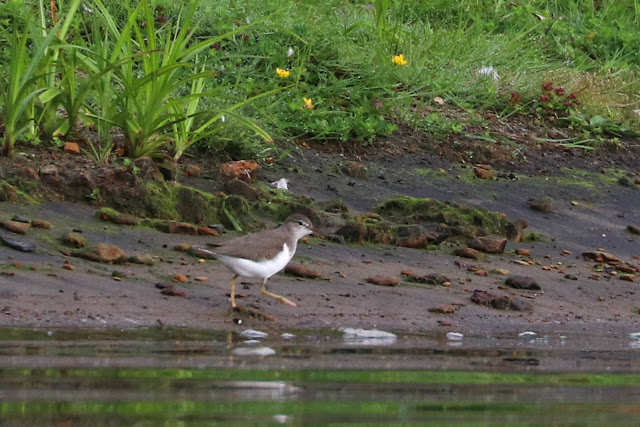 Later that day Jacob hung our new owl house on the edge of our property. 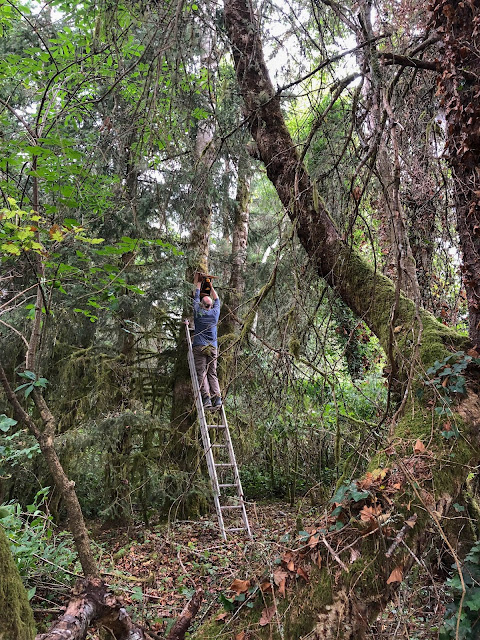 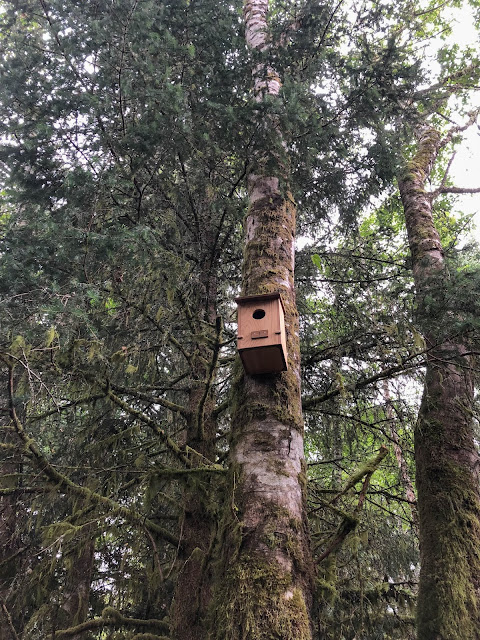 Hopefully a screech or saw-whet will stumble upon it!

We also took down most of the bird houses that were on the house when we bought it.  I was hoping some might be able to be cleaned and reused but none of them were designed to be opened with anything but a hammer. 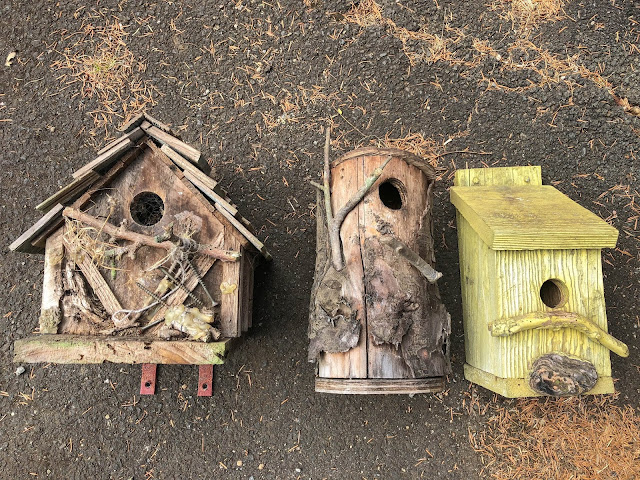 We had seen a House Sparrow fly out of this red barn bird house many times but never saw babies.  I took a hammer to it and found the most nesting material ever. 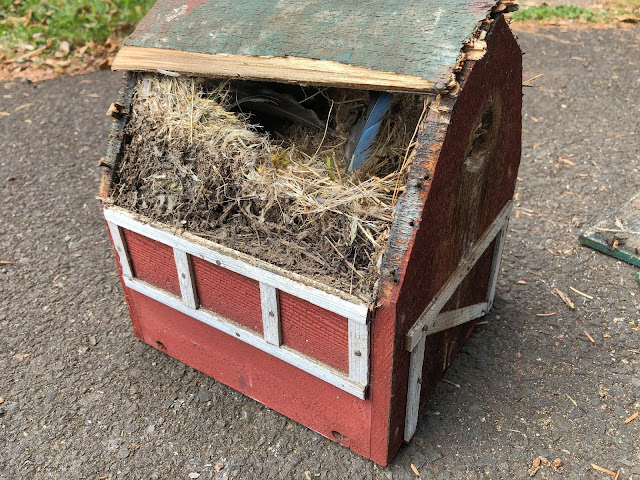 And four eggs that never hatched. 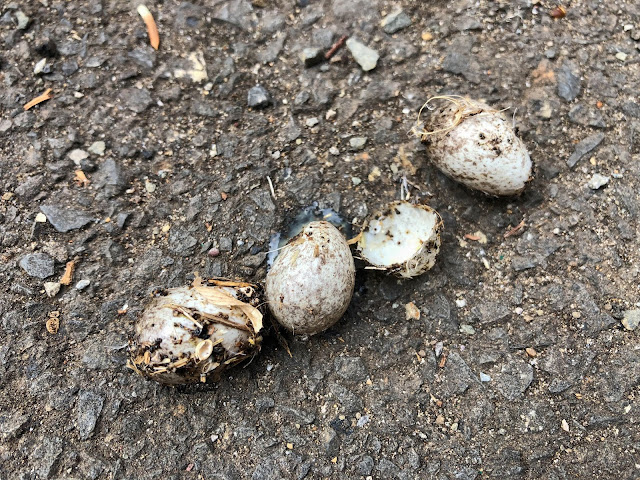 We will be replacing the houses we took down with ones that can be opened and cleaned including a couple swallow houses (with oval openings to keep out the House Sparrows).

Last week I went out there for one night to meet a guy about some HVAC ducting.  Amazingly he showed up in the first ten minutes of the two hour window so once he left I had plenty of time to go birding before heading home.  I decided to try for shorebirds near the D River Beach access. 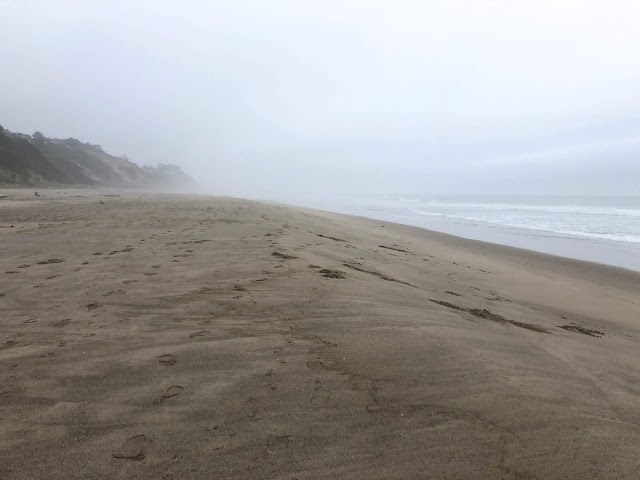 There are some large puddles up on the beach away from the shore and one had a group of shorebirds.  I picked through them and found mostly Westerns but also a Sanderling and a Baird's County Bird Sandpiper! 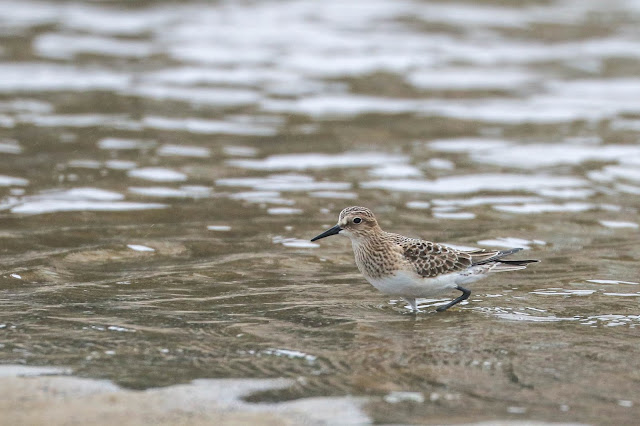 I continued on up the beach and found more Sanderlings and a couple of Whimbrels.  As I approached some nice coastal rocks covered in birds I noticed one larger shorebird in the mix, a Marbled Godwit. 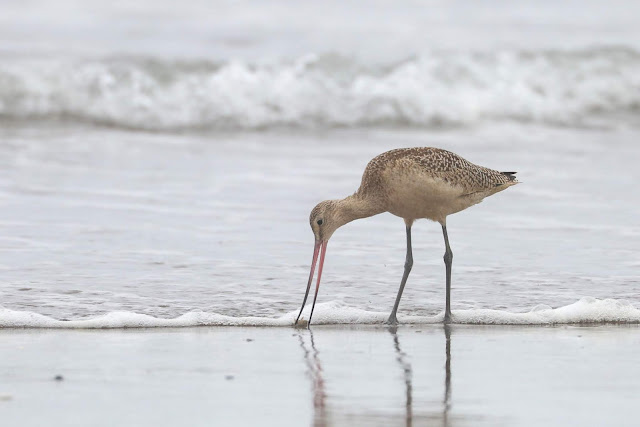 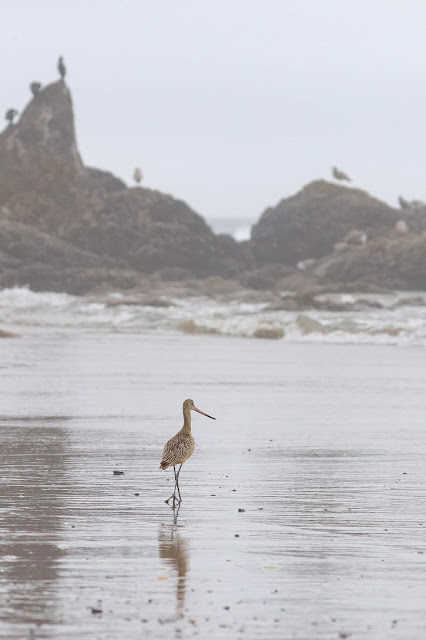 A new bird for the future 5MR.  On the rocks were mostly gulls and cormorants but also a few Black Oystercatchers. 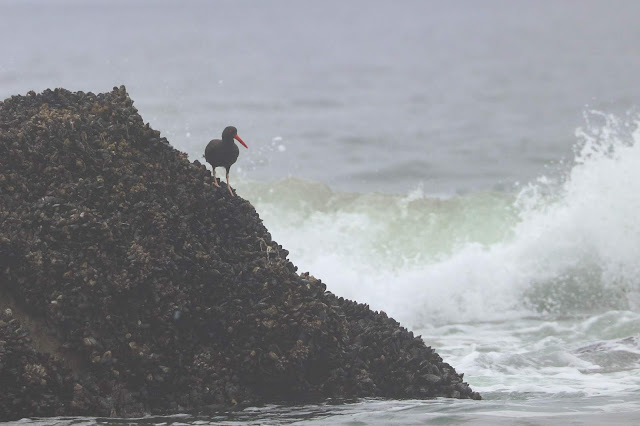 I realized at this spot that I really need to work on studying cormorants because I am terrible at distinguishing Pelagic and Brandt's. 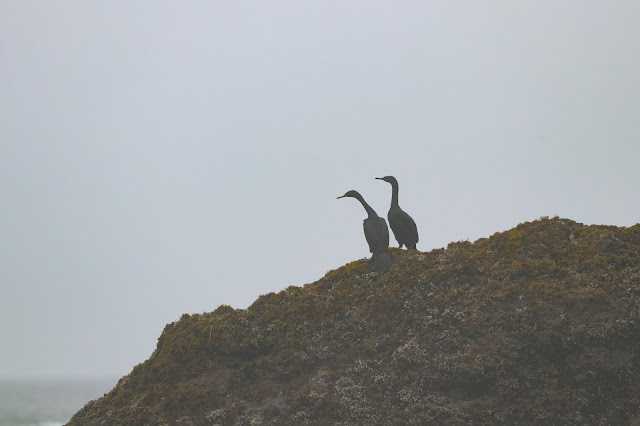 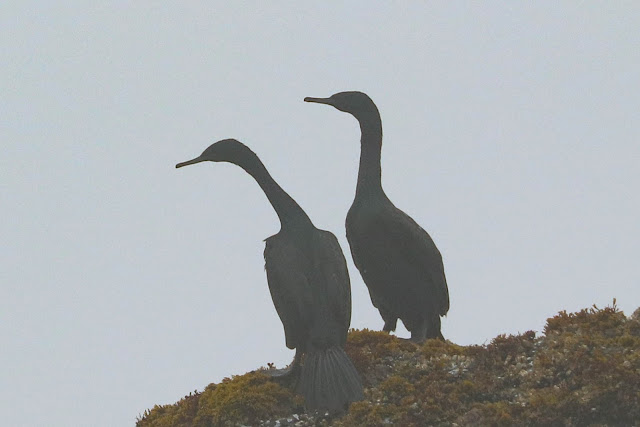 On the walk back I found the Whimbrels in a less foggy situation than earlier. 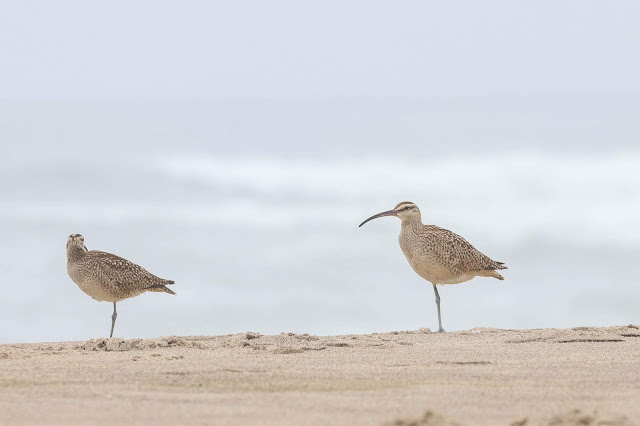 This gull had shoved a sea star in its mouth but seemed to be making little progress on digesting it: 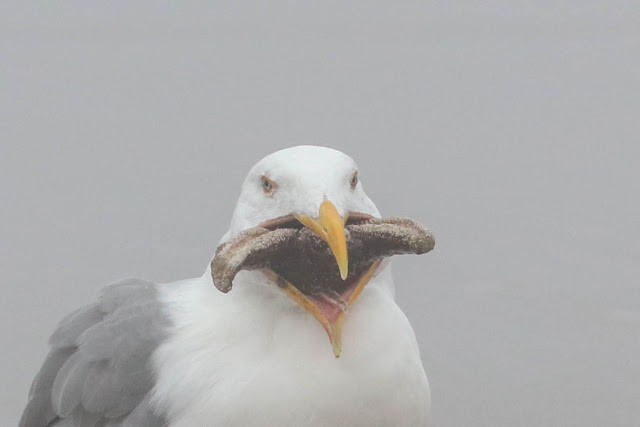 On Friday I went back out to Lincoln City and after dropping the dogs off at the house I went over to the sewage ponds.  Someone was mowing so I had low expectations but thankfully the Red-necked Phalarope seen earlier in the week was still there. 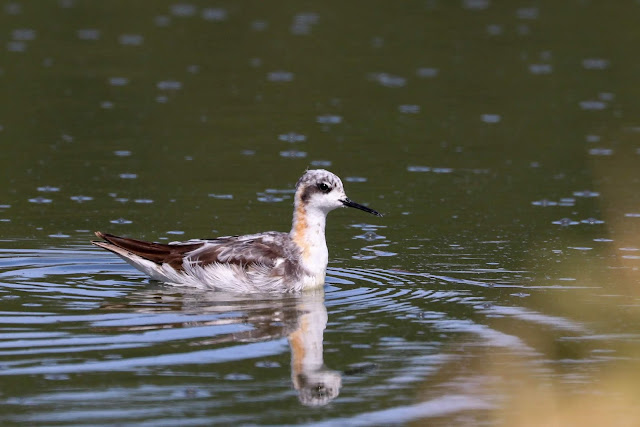 Another new one for the future 5MR!  Also around were a couple Leasts and a Western, but not much else.

On my way back I stopped at the D River Beach access because there had been reports that week of lots of Sooty Shearwaters and alcids.  Instead of those birds I first encountered this cormorant, reminding me I need to work on cormorant ID instead of looking for 5MR birds. 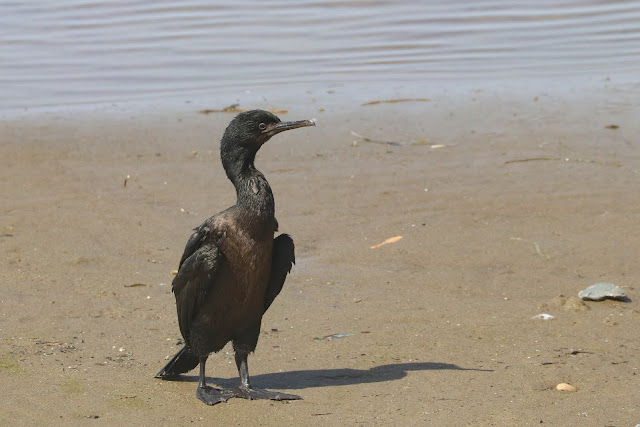 Out on the water I found what looks like four Rhinoceros Auklets. 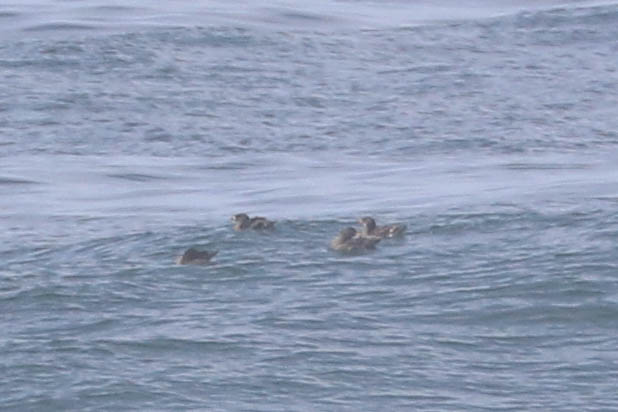 Yesterday Jacob and I did a little birding in the afternoon with stops at D River Beach, Salishan Nature Trail, and D River Open Space.  At the beach we found way more shearwaters, at least one Rhino Auklet, and tons of birds that my scope would not focus on.

The tide was too high for shorebirds at the Salishan Nature Trail aside from some Whimbrels but we had a Black Phoebe (first one eBirded there) and a confiding Red Crossbill. 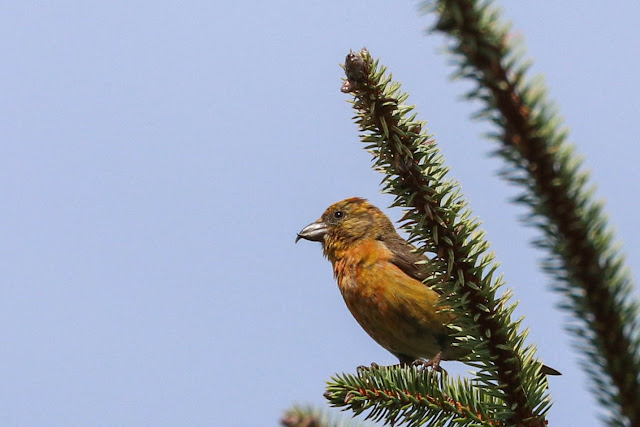 At D River Open Space someone was being sketchy near our car so we didn't stay long.  Just enough time to spot a cormorant on a log. 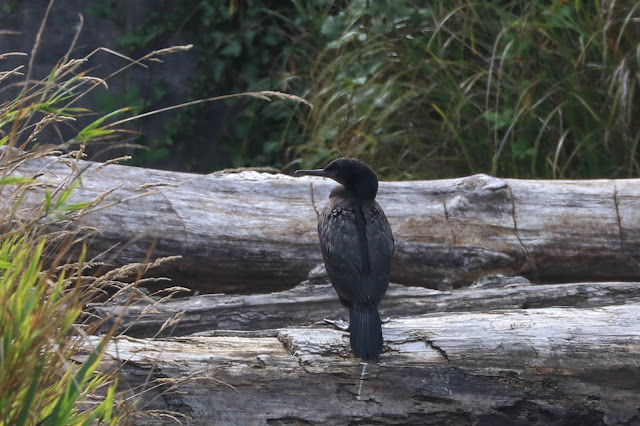 Okay okay, I get it, I need to study cormorant ID.  In my brief internet research I found this helpful article by Dave Irons but I could use a lot more comparison photos.  Feel free to share any resources you might have on this topic!