on December 07, 2019
This week I completed my first winter raptor survey for the season in Portland.  It's not as flashy as my old Gilliam County routes with their Golden Eagles and abundance of Roughies, but I don't even have to leave my 5MR to start!  Plus it takes me to so many places I used to bird A LOT, starting with my old patch, Mays Lake. 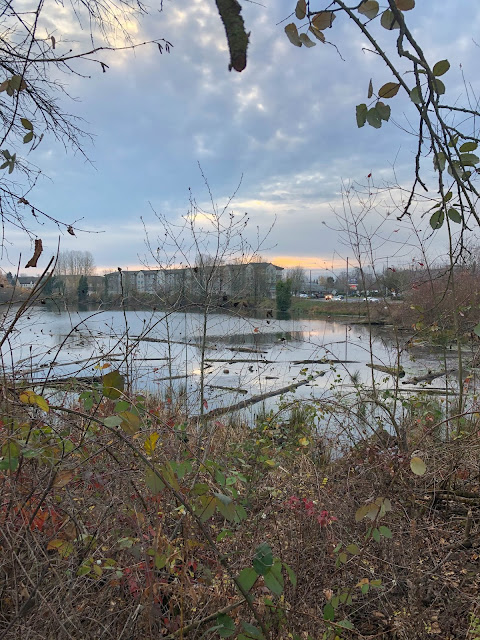 Normally I just scan the trees here but on this day I decided to see what the duck scene was like.  I'm so glad I did because my 5MR year bird #154 was in there! 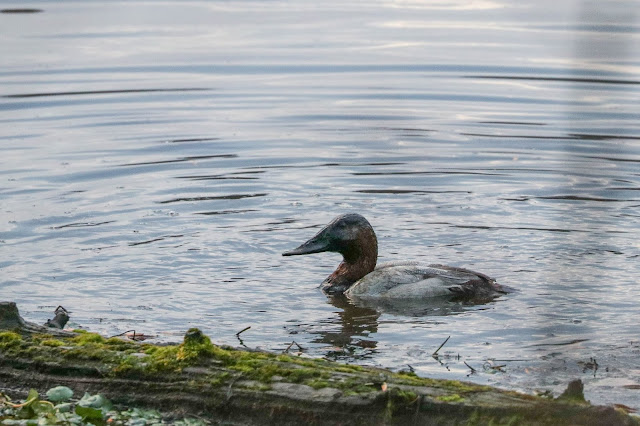 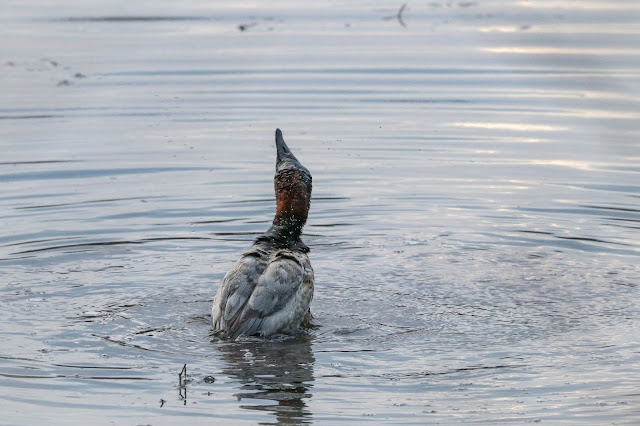 It was a good start even though it was not a raptor.  I drove the route down Airport Way to 82nd to Alderwood to Cornfoot.  I pulled over to check the slough at NE 55th and my first Cooper's Hawk of the day was perched in a tree. 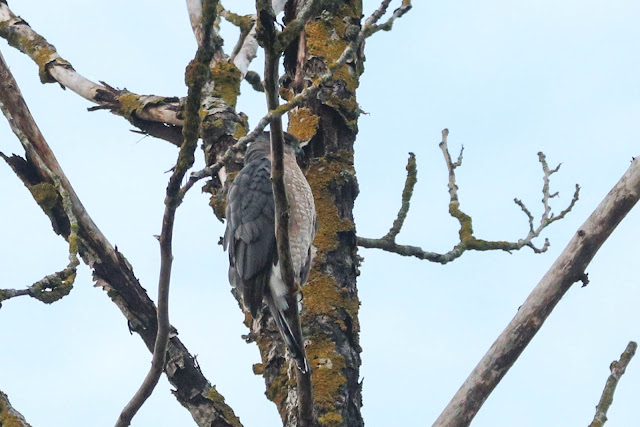 After checking Airtrans Way I stopped at Whitaker Ponds and did a quick stationary count that included my first Bald Eagle of the day. 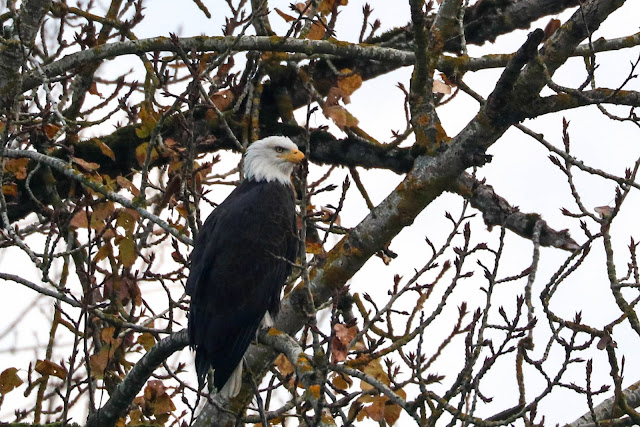 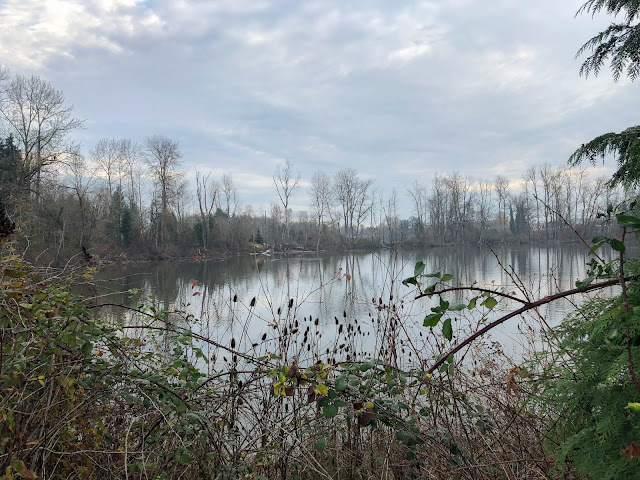 One of the best areas of my survey is along Marine Drive by the airport, but there is nowhere to pull over so I'm sure I miss birds every time.  I did check for the Rough-legged that's been hanging out near the fire station and completely missed it.  Someone eBirded it before AND after I was there so oops.

Next I drove down NE 33rd where I found a couple of Red-tailed Hawks with airport wing tags.  I never bother to report these birds that are so close to the airport but the guy in charge of the raptor surveys specifically asked us all to report them.  So I did. 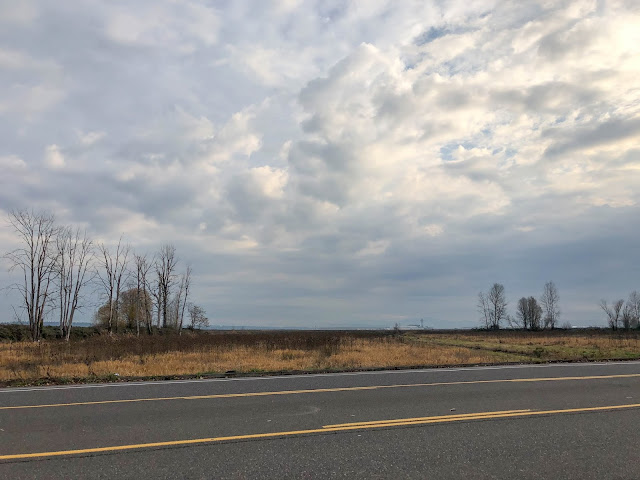 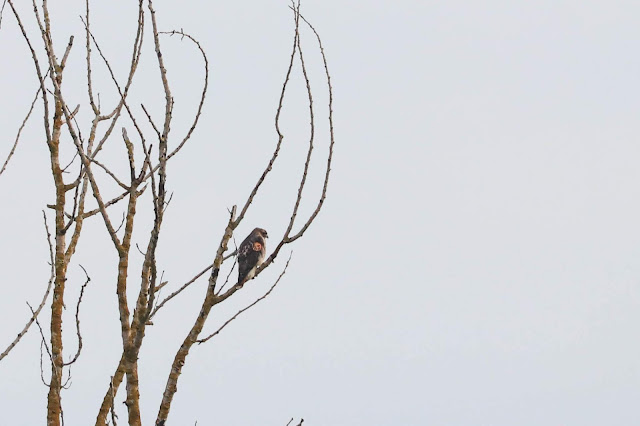 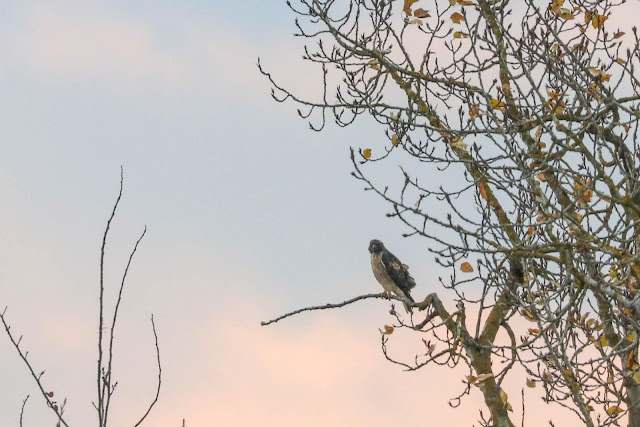 I sent photos of these birds with the location to Carole Hallett who is in charge of the airport raptor tagging program.  She replied back with some great info about these two:

"You captured great photos of two of our long-time resident birds: the male 8J:8J and female 50:50 of the West End/33rd territory. This pair nests on the west side of NE 33rd in the row of trees behind the barn that sits out in that field on the corner of Marine Dr and 33rd. The nest is easily visible from that big dirt pull out across from the National Guard building. '8J' joined the territory and was tagged in 2011, '50' joined in 2013 and was tagged in 2014, each replacing a bird that had been caught and banded in the first weeks of the raptor program back in 1999.  The original birds were female WE:WE and male X:S and they both lived deep into their teens."

It's so cool to learn about individual birds.  I never would have assumed that this was a pair or that they had ruled this area for so long.  To me they were just two random Red-tails perched at opposite ends of a large field.  I didn't think they knew each other.

I checked the ducks at the Columbia Slough before turning around to head back north.  Nice Common Goldeneye in the mix. 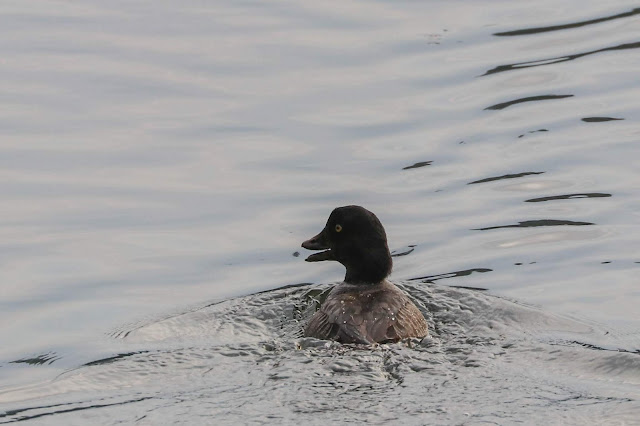 From here the survey goes back to Marine Drive then down 13th, Gertz Road, and Fazio Way, then back to Marine Drive.  I always stop for snacks at the gas station where Marine Drive, MLK, and Vancouver Way all meet because they have the best snacks.  Chocolove salted caramel cups.  Late July nacho chipotle tortilla chips.  And more.

Next is driving to the end of Heron Lakes Golf Course, then walking from Force Lake to Vanport Wetlands.  Another Cooper's Hawk was perched along the road there, one of three in the area. 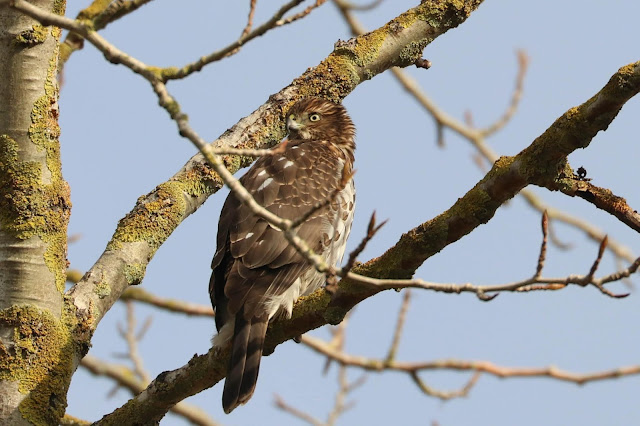 The water at Vanport was so low I only saw one duck species before walking back to Force Lake.  Force Lake was my first patch, before I knew what a patch was or that it was called Force Lake, or that anyone else birded it.  It was where I first identified a Double-crested Cormorant and where I realized I liked birds and taking pictures. 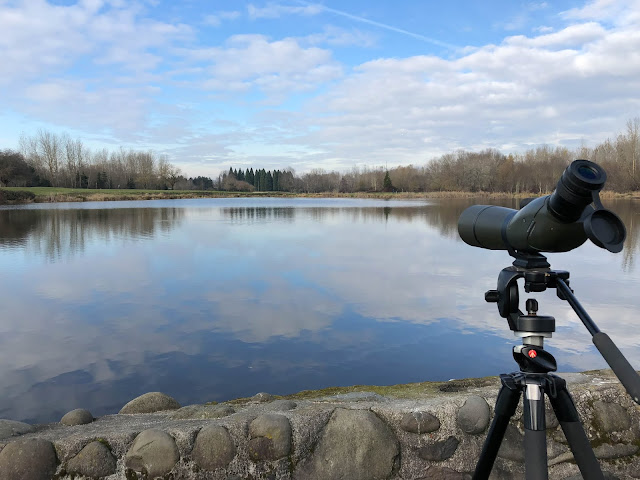 The far side of the lake offered an abundance of non-5MR Canvasbacks paired with golfers. 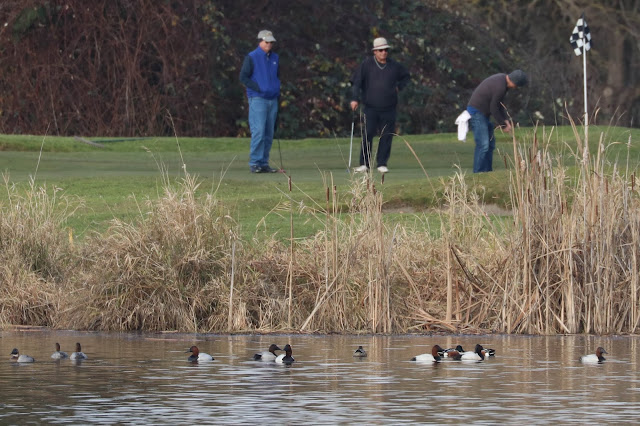 I was psyched to hear a Black Phoebe calling incessantly here though I never located it.

By the time I made it to Smith and Bybee Lakes I had seen 22 raptors.  Last winter I think I had a survey with only 20, so I was feeling good. 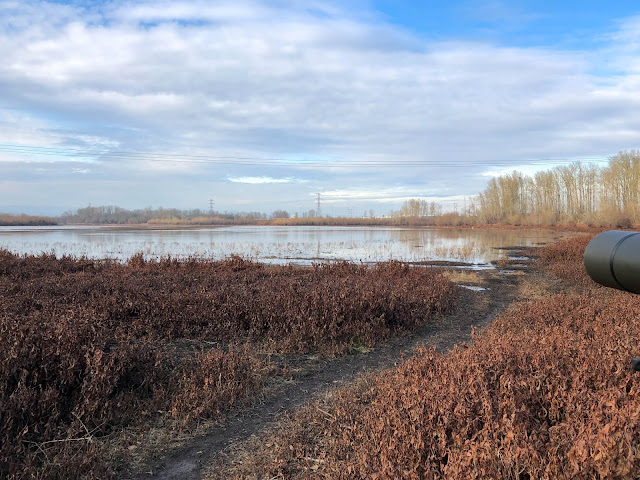 Here I had six Red-tailed Hawks, my only harrier of the day, and four adult Bald Eagles.  Also a couple of Greater Yellowlegs. 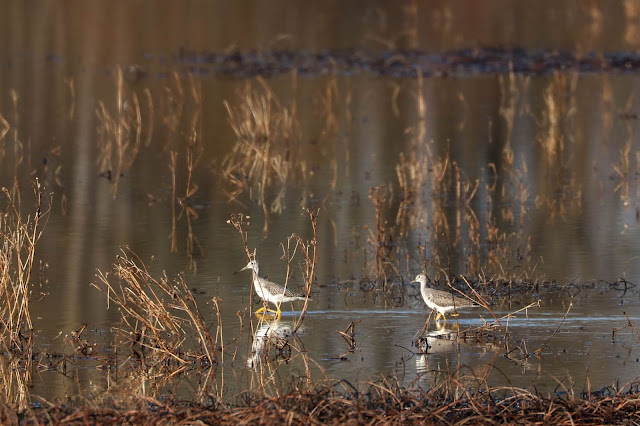 I walked out past the Bybee blind because that's usually my best bet for Red-shouldered Hawk and Peregrine, but no luck on those.  As I walked back there I thought to myself maybe there's a shrike back here.  I've dipped on shrike here a billion times over the last ten years so I had a good chuckle when there it was. 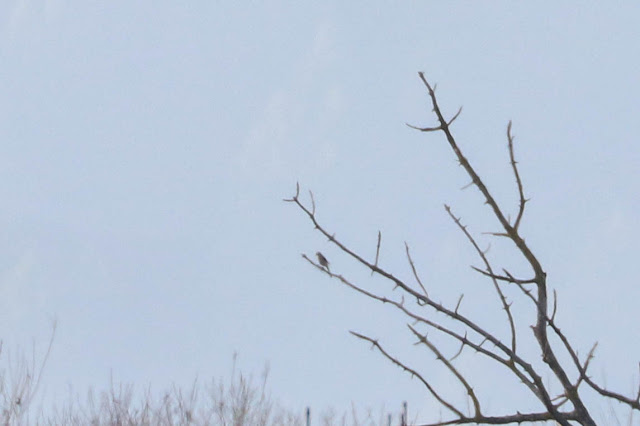 Just like everybody says, it was actively hunting way out there.  Exactly where I've looked before.  Always feels good to slay a nemesis, even when you've kind of forgotten it was a nemesis. 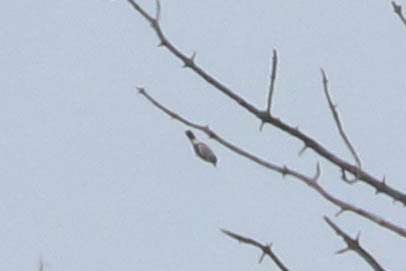 It was a pleasantly birdy walk back to the car. 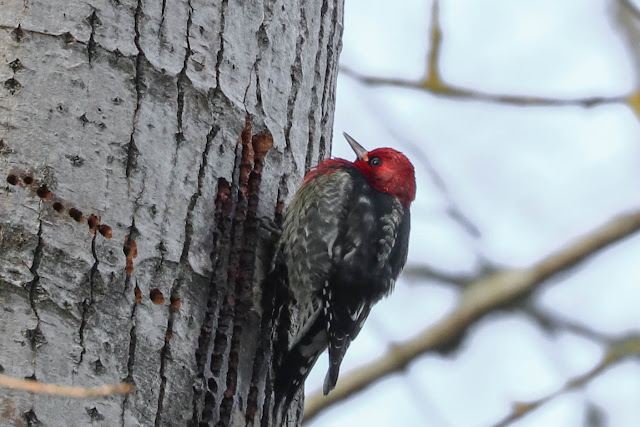 From this spot the survey heads west to Kelley Point Park, down the park road and back, then over to N Time Oil Road.  This is a weird road but there's always a kestrel, which was my last raptor of the survey. 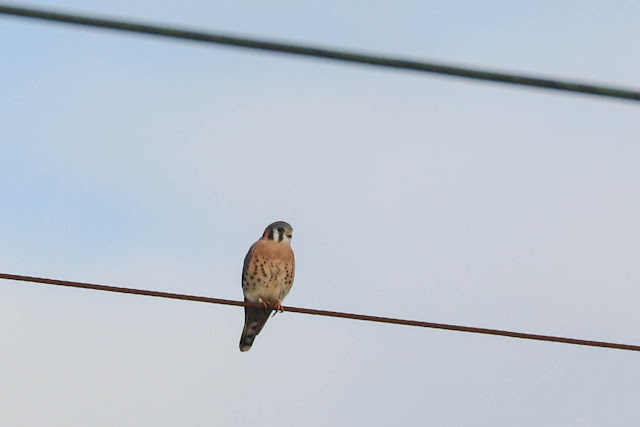 I finished my 50-mile survey with 36 raptors:  22 Red-tailed Hawks, 3 American Kestrels, 1 Northern Harrier, 5 Bald Eagles (all adults), and 5 Cooper's Hawks.  This is only my third winter doing this survey but the RTHA and COHA were high counts for me.

At home I found another raptor waiting for me in the front yard, this gorgeous Sharp-shinned Hawk: 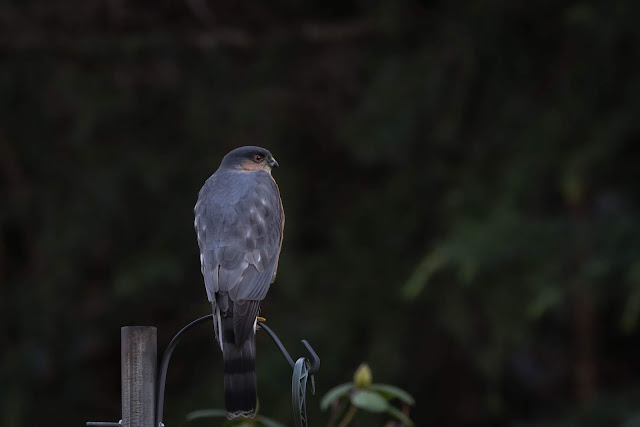