on January 09, 2020
My birding goals for 2020 are a bit of a shift from 2019's 5MR-focused birding: to bird the less birded areas of Oregon.  Looking at eBird tells me that the counties in Oregon with the fewest checklists are Gilliam, Wheeler, Sherman, and Morrow.

Check out Morrow there.  It has 4078 checklists TOTAL.  The auto tour at Ridgefield NWR in my current Clark County, WA has 4255 checklists alone (there are 25,541 total in the county). 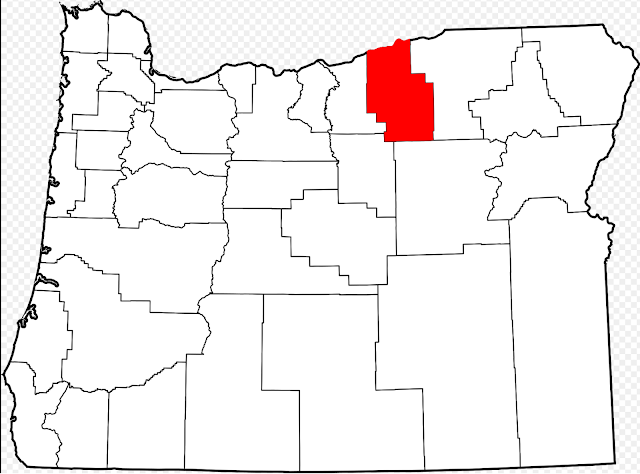 I decided to start my plans with Morrow as it's a fairly accessible county with some of the top birding locations close to I-84.  My county list was at 79 and using eBird I made a list of 30 target species for January.  Years ago I printed off a bunch of the birding locations for various counties on the ECAS website and I combined this with eBird to decide where to go.

My plan was to drive straight to Morrow with no stopping but I could not resist a stop at the Blandford Canyon exit in Gilliam to scan the river.  Amazingly I scored a county bird there with a Common Loon.

My first stop was at a location I found on eBird 7 miles south of the big Love's Truck Stop, Tower Road Ponds.  The road itself is not super busy but every few minutes a big truck would barrel past on its way to or from the highway.  The ponds extend on both sides of the road and I found 18 species here. 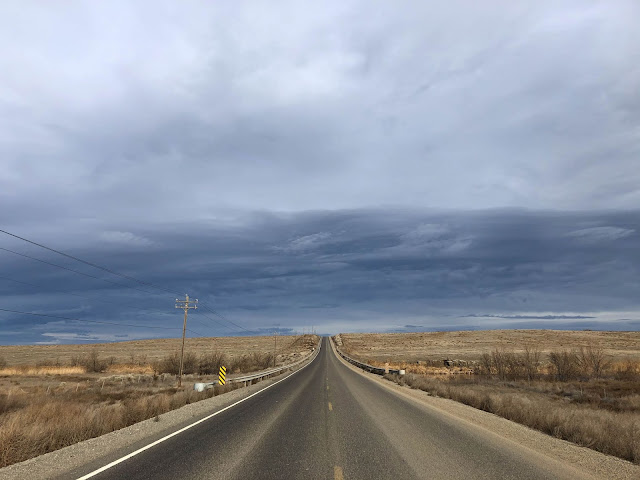 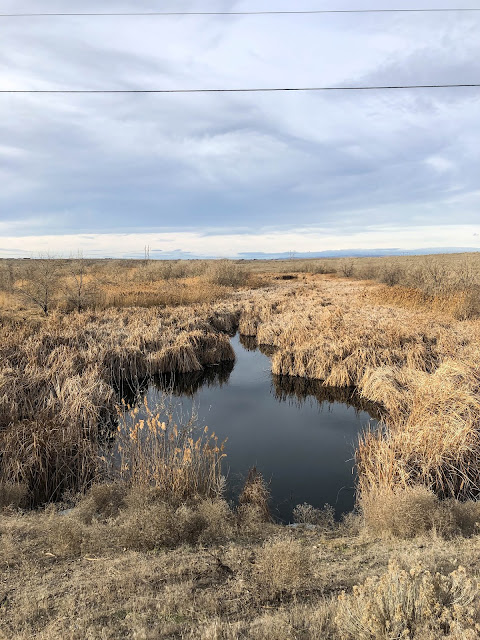 The duck variety included mostly Mallards, a couple Ring-necked females, two Northern Shovelers, a Common Goldeneye, and a small duck I could not identify.  Maybe a Green-winged Teal? 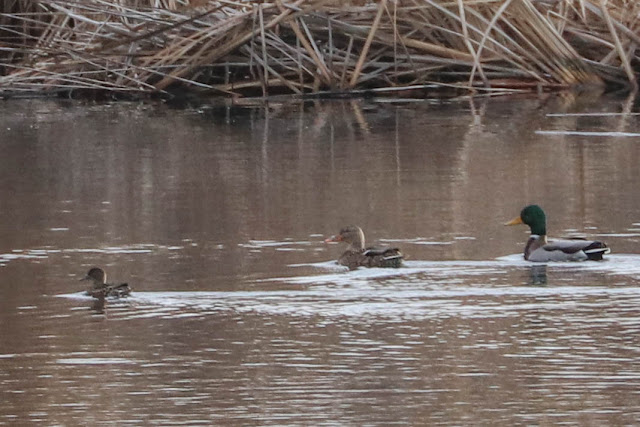 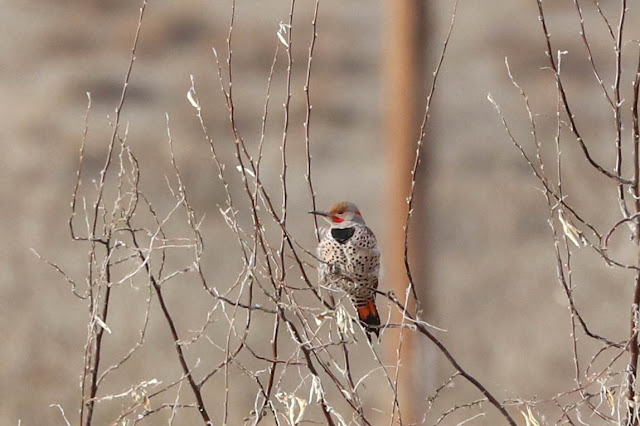 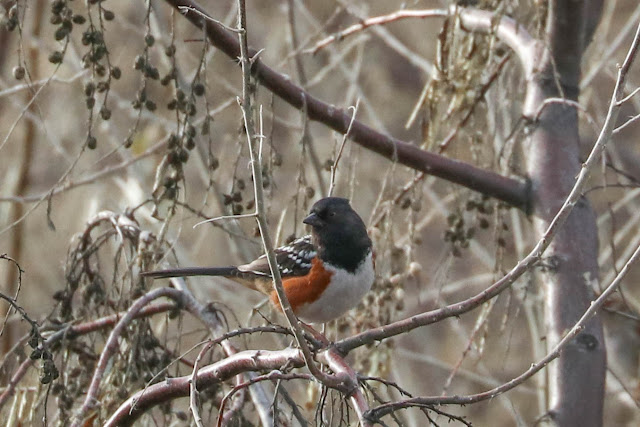 Raptors included a Northern Harrier, a Red-tailed Hawk and an American Kestrel.  The noisiest birds were the Snow Geese flying over nonstop.  The eBird filter for Snow Goose is set at 100 for some reason but there were thousands. 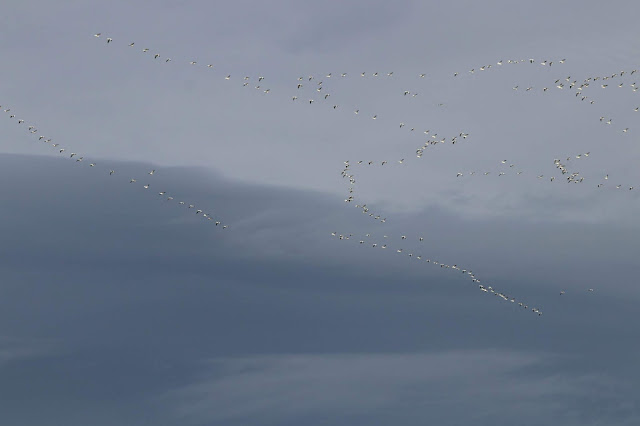 Though none of these birds were new for me in the county a few were new for the hotspot: Snow Goose, Spotted Towhee, Common Goldeneye.   There are only 53 checklists for this hotspot so far with 81 species detected.  Apparently it's a Tricolored Blackbird spot in summer and that might be why it has this many checklists at all.

Next I headed to Boardman Marina and RV Park, the #2 hotspot in the county.  In December a birder found both a rare Yellow-bellied Sapsucker and a rare Hutton's Vireo here though I was not expecting to find either of these species. 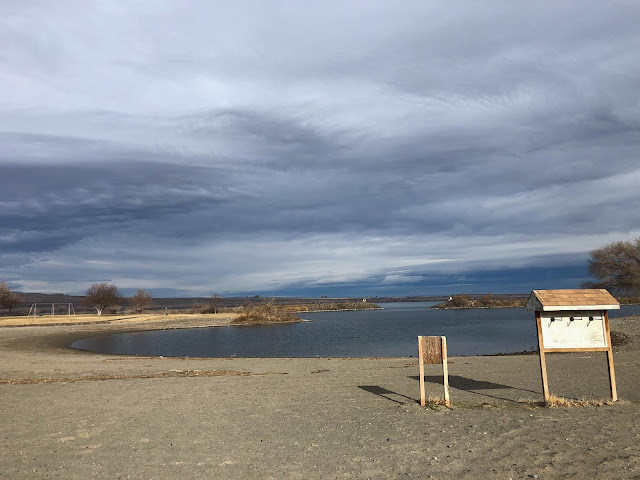 I picked up my first county birds here, American Wigeons and Common Mergansers.  A Belted Kingfisher was pleasantly posted up in front of the dramatic sky. 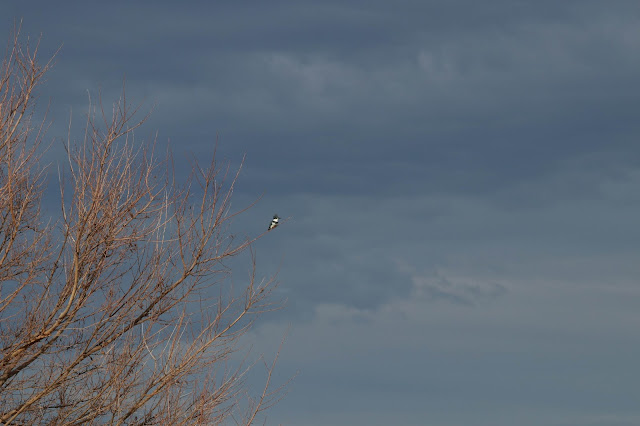 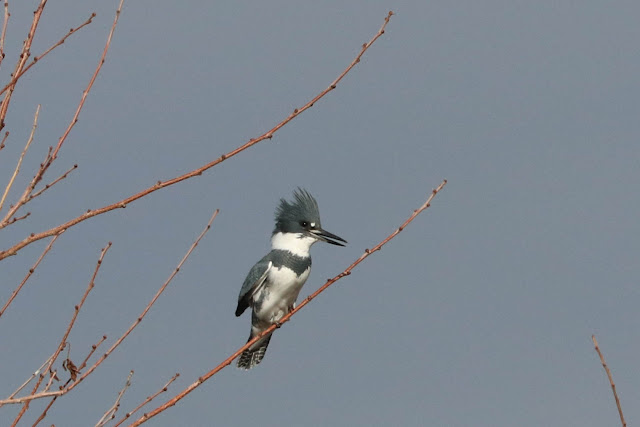 I poked around the jetty rocks for a bit and found my county Horned Grebes. 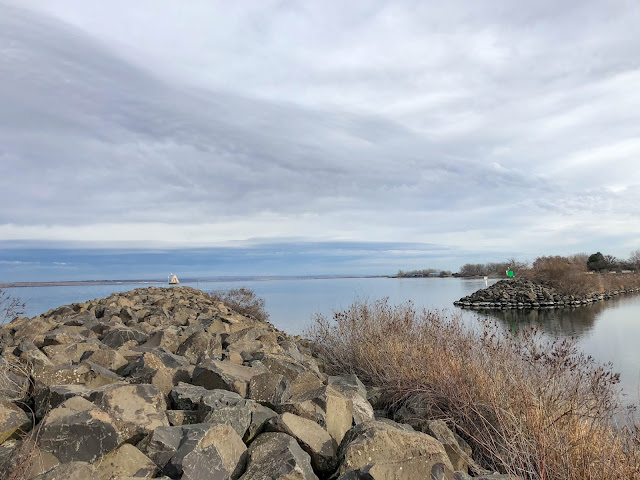 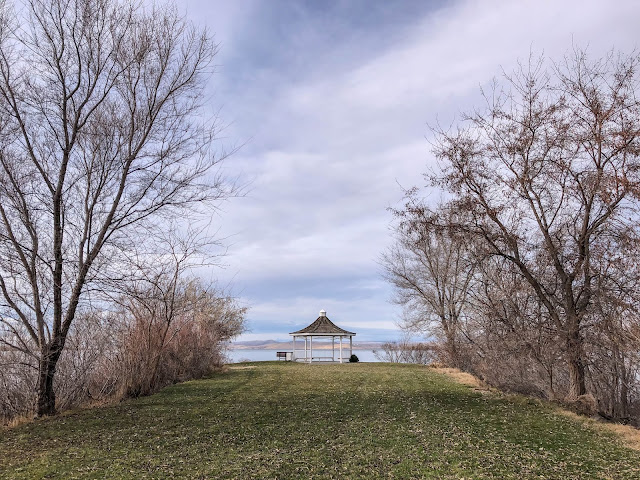 South of the gazebo is a wooded area that was birdy as hell.  Not that hell would be particularly birdy, except of course for those that hate/fear birds.  But anyway. 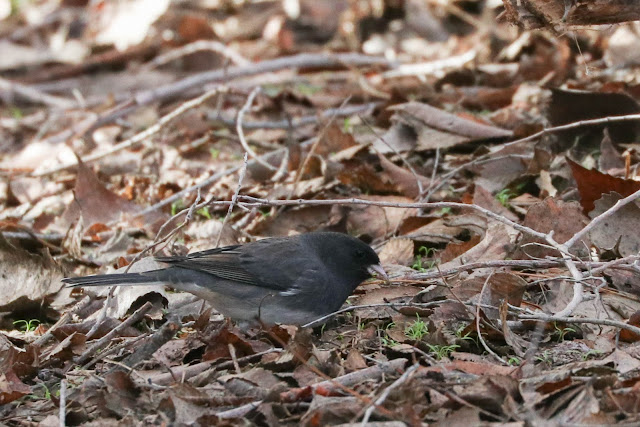 Dark-eyed Junco, not quite slate enough for Slate-colored I don't think

It was here that a stripey red-capped sapsucker flew right across in front of me and landed nearby.  I lifted my camera and it took off into the sun towards some trees where I never relocated it.  I'm fairly confident that was the Yellow-bellied but not confident enough to eBird it (just sapsucker sp.).

While I tried to find it again I found my county Downy Woodpecker, some California Quail, lots of robins and flickers, and my county Ruby-crowned Kinglets and Brown Creeper. 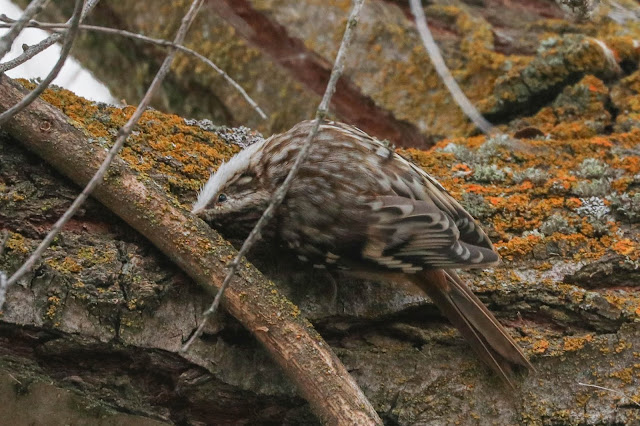 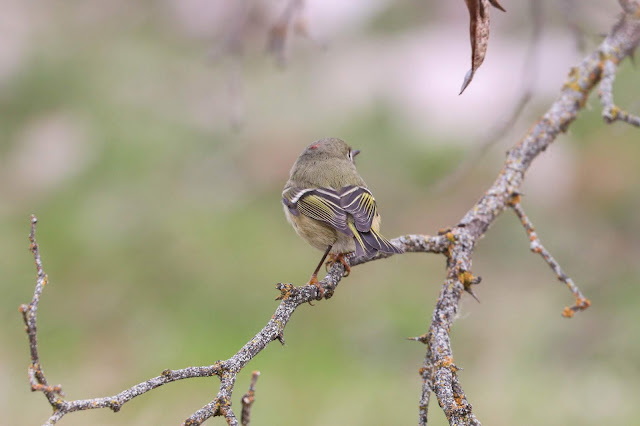 On my way out I found a few Golden-crowned Kinglets in the parking lot pine trees, another county bird.  I had 8 total new county birds here out of 29 total on my checklist.  A few had not been recorded during this time period in eBird, represented by the red dots. 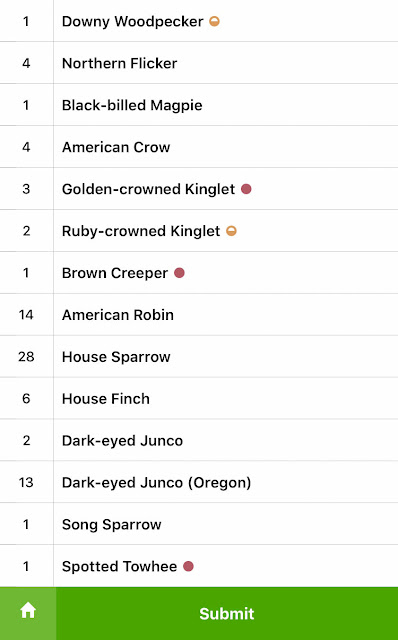 Next I planned to hit the Ulman Utility Ponds, the Boardman Sewage Ponds, and then head to Irrigon, the next town over.   I made it to the first ponds and was distracted by the mass of crows and gulls trying to snag snacks at the building across the road. 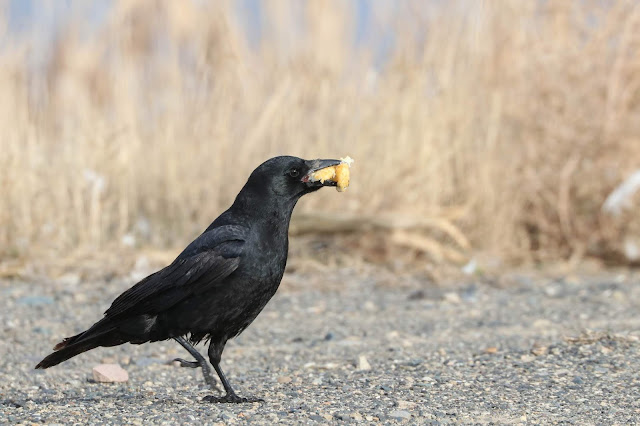 The ECAS website mentioned a way to get better views of the ponds but I did it wrong and ended up heading out of town.  I decided to head to Irrigon rather than turn around and try again.

Irrigon Marina Park was my destination which is similar to Boardman Marina but birded far less.  The first eBird checklist was only in 2015, and there are only 42 checklists total. 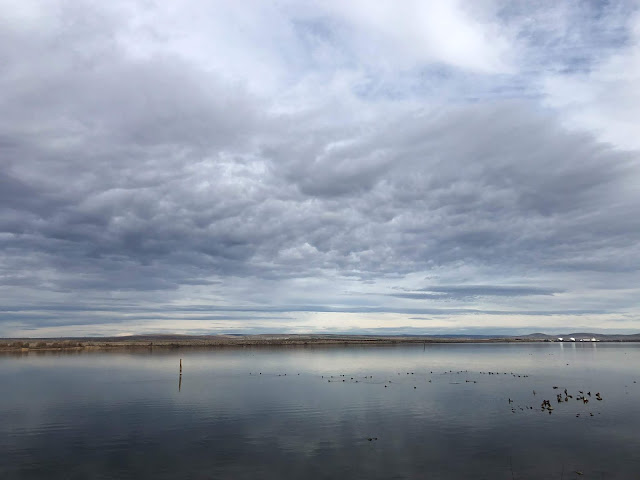 The first bird I saw when I got out of the car was a Sharp-shinned Hawk.  Good start. 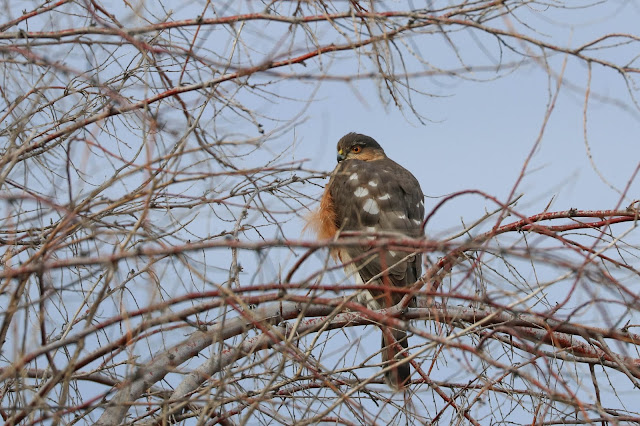 My instinct was to walk west towards the marina and jetty but a bunch of ducks to the east had me curious.  They turned out to be all Mallards but then I noticed a Bald Eagle flying in, pursued by a Red-tailed Hawk. 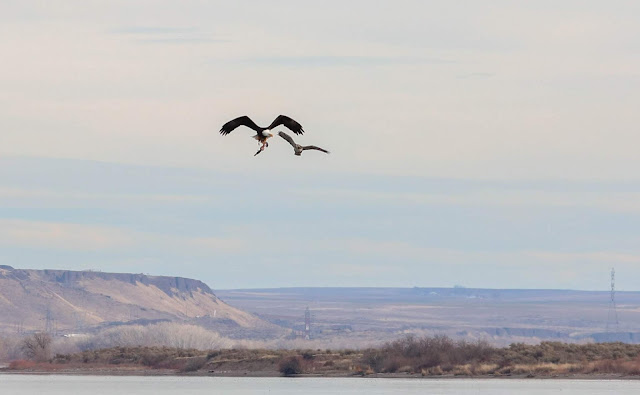 A mostly-eaten Mallard was dangling from the eagle's talons and it landed in a tree to the east. 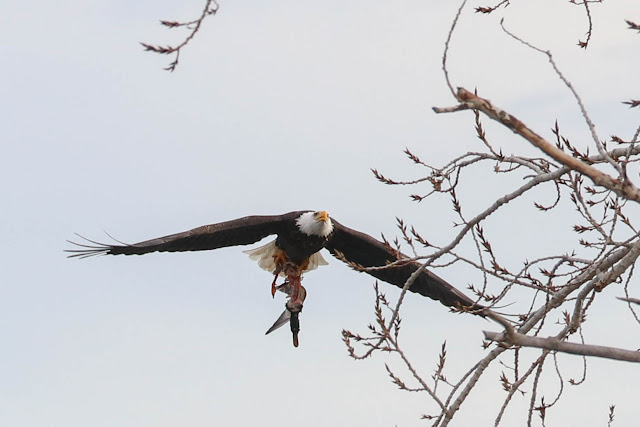 Eventually the hawk and another Red-tail harassed it enough and it took off again, this time flying low over the Mallard flock in the river.  Kind of a psychological warfare with the dead Mallard dangling. 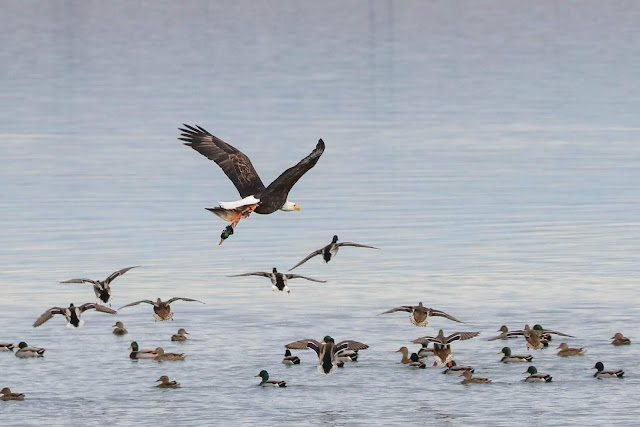 It landed on some wood in the river, then two more eagles showed up.  The original eagle took off again, flying higher over the river, still clutching the Mallard remains. 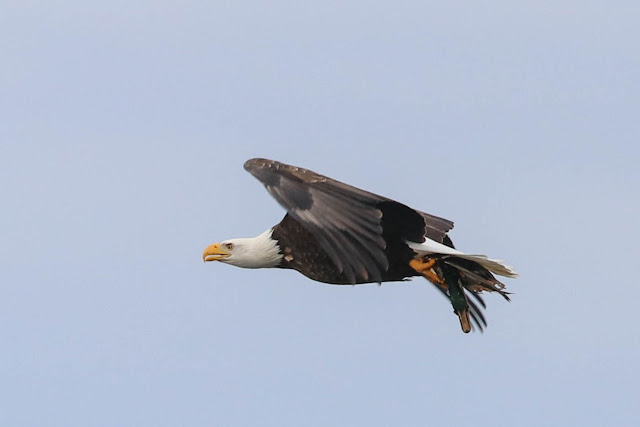 All this action had drawn me east along the river so I decided to keep on going till I hit a more brushy/woodsy area.  A sign indicated there was a trail but it was a little sketchy-looking.  I heard birds though so I decided to check it out. 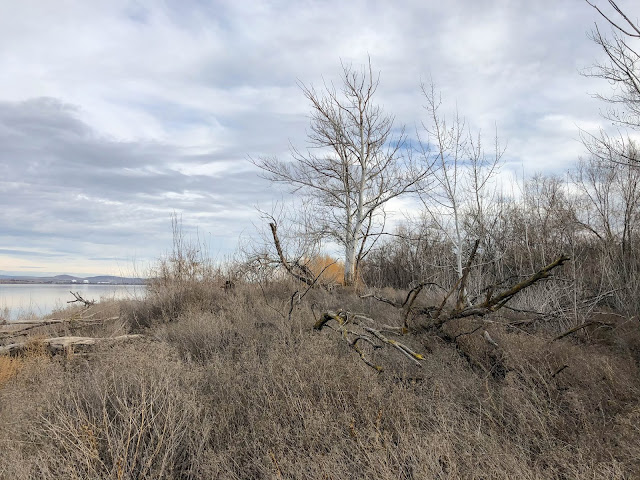 Here I found my final county bird of the day, a Hermit Thrush. 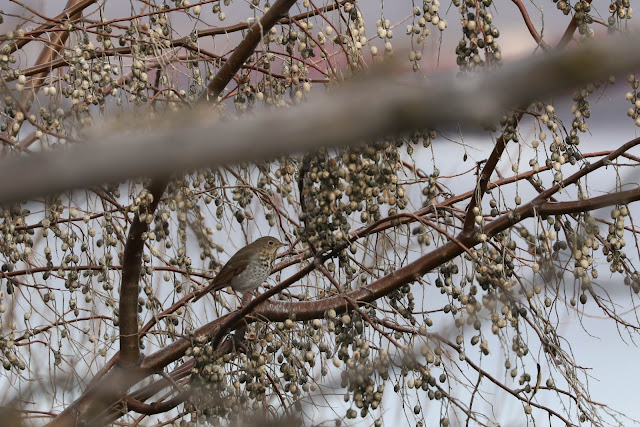 The thrush and nearby Spotted Towhees were new birds for the park checklist.

Out on the water I could see some distant ducks that may have been my county scaup but I could barely see them, let alone identify them.  I did manage some Western Grebes. 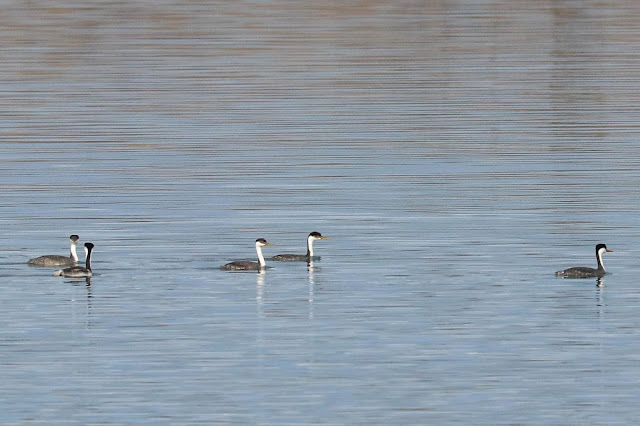 I finished birding here with 21 species which put me at #3 for the hotspot top birders.  Clearly this spot needs more visits!

After this park I planned to drive back through Boardman and find the sewage ponds but I had run out of time since I left the dogs at home and Jacob was out of town.

I look forward to more visits out here in 2020!  I had never birded any of these locations before and I hope to hit more new spots in the spring.  My Morrow list is up to 88 species with plenty more spring targets to keep me busy.  Good times!!!
Bald Eagle Belted Kingfisher Brown Creeper Hermit Thrush Northern Flicker Ruby-crowned Kinglet Sharp-shinned Hawk Snow Goose Spotted Towhee Western Grebe