On our last day we woke up to howling wind.  I had the worst time sleeping the night before as it was rattling the whole house.  Birding expectations for the day were very low.  We had coffee and watched Brown Jays coming to the fruit feeder Caroline made out of random stuff in the yard. 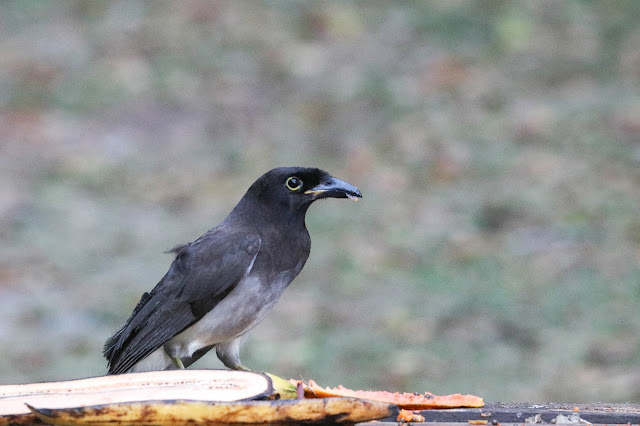 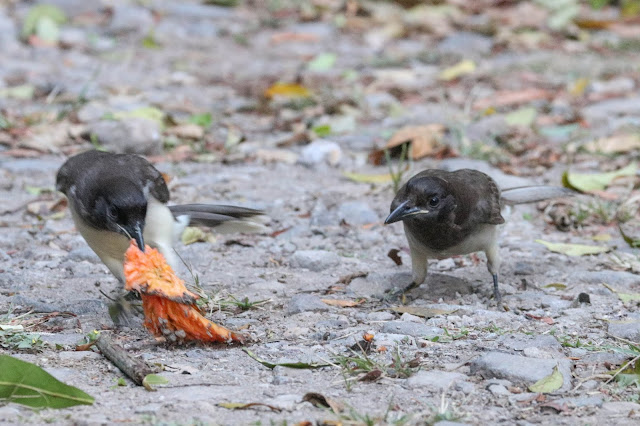 While we were watching them I noticed a bird wander out of the shrubs into the entrance road. 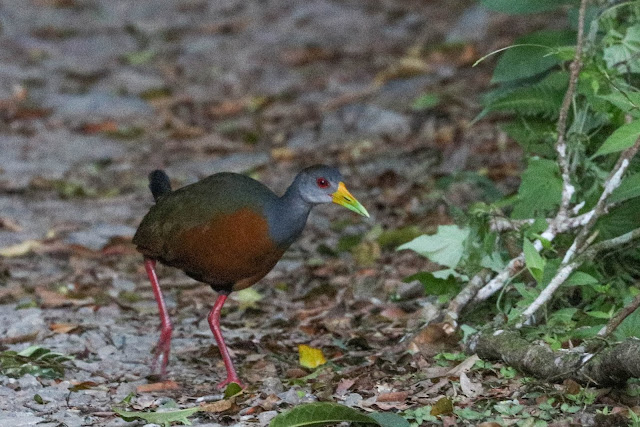 Gray-cowled Wood-Rail!  Once lumped with the Russet-naped Wood-Rail (called Gray-necked Wood-Rail) we had seen previously, they were split in 2016. 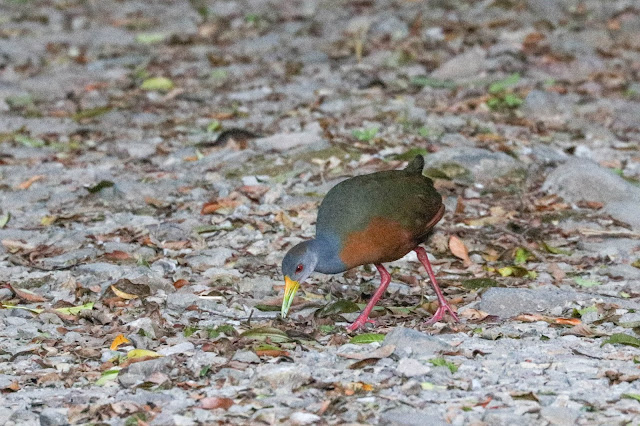 Caroline had thrown some fruit in what looked like a compost pile and the wood-rail actually went over there and scrounged.

We braved the wind to walk around the trails by our Airbnb and it was kind of unpleasant.  This tiny lizard was cool: 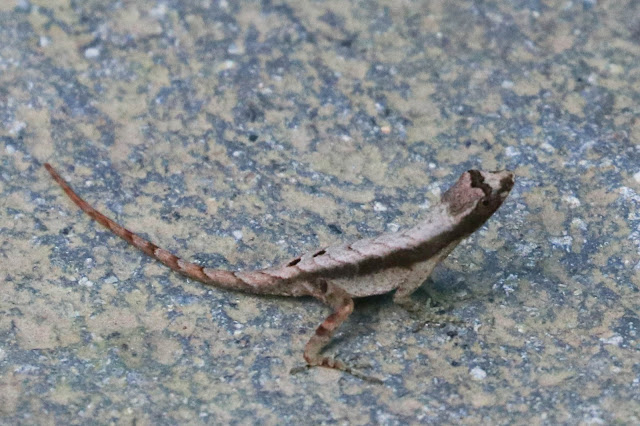 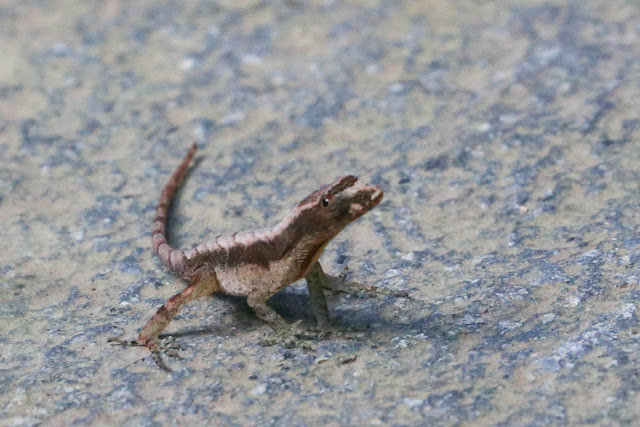 iNat suggests a kind of anole 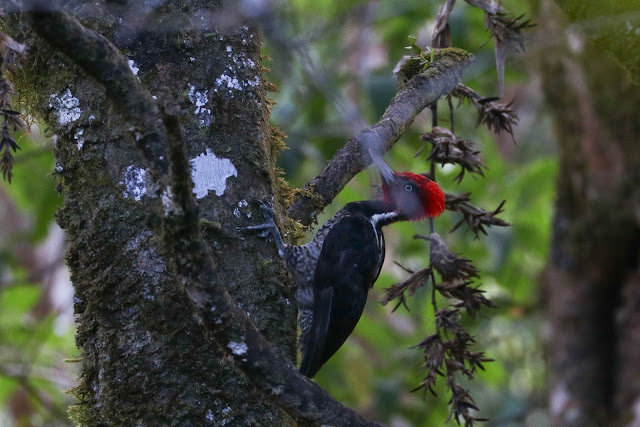 Pale-billed Woodpecker with stick over its face 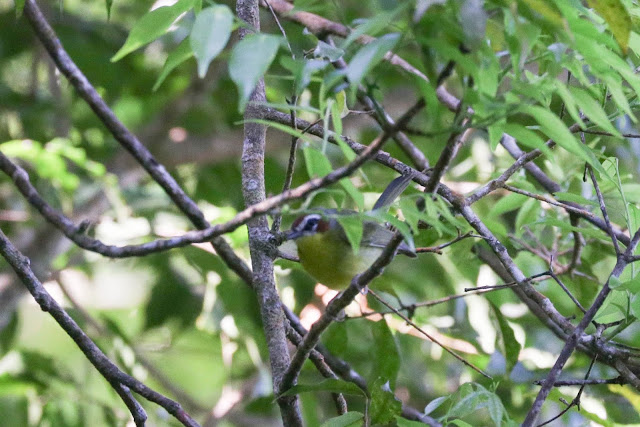 Eventually we packed up to leave and go birding at Bajo del Tigre in Children's Eternal Rainforest, "Costa Rica's largest private reserve." (Says many internet sites).  The fellow working at the little entrance station/gift shop was very friendly and warned us that the wind could make conditions dangerous.  He said if branches started falling down we should turn around.  Ok.

Birding was slow to begin with and I remember we made a very low target number for species.  15?  We were not expecting much.  The first bird I photographed was a hummingbird perched in the sunlight, a Blue-vented Hummingbird. 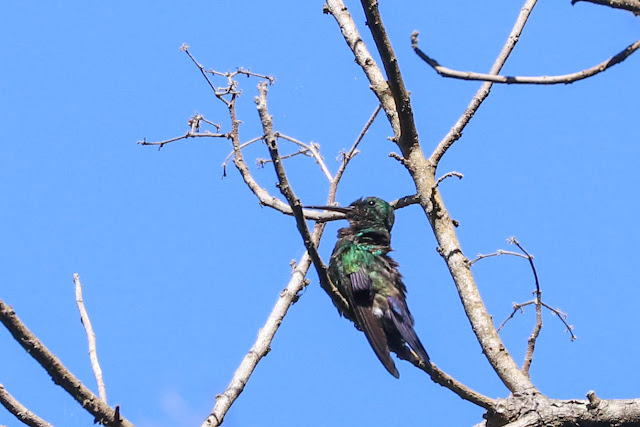 We had good looks at a Yellow-throated Euphonia here. 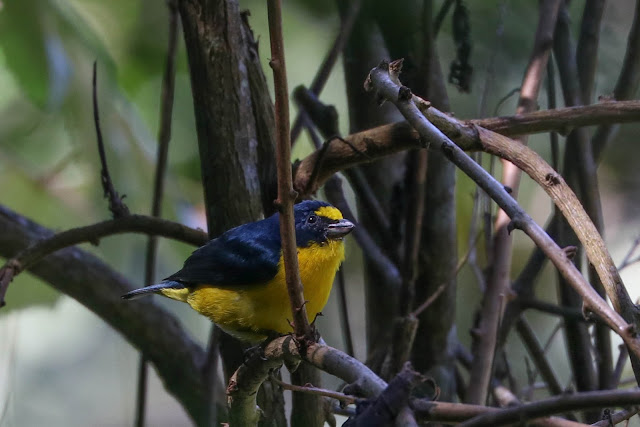 Our species count slowly grew with the addition of a new trip bird, Red-crowned Ant-Tanager, and many more common birds. We managed to walk far enough that we were even out of the wind for awhile. 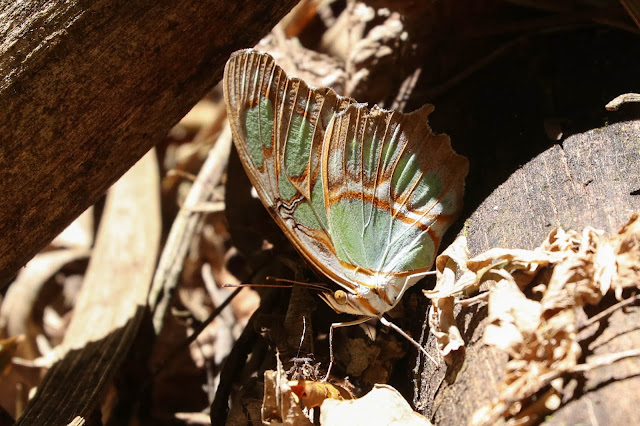 This awesome lizard was sunning itself on a leaning tree. 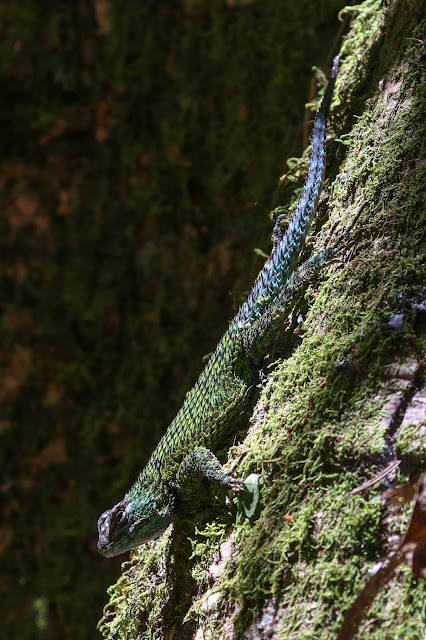 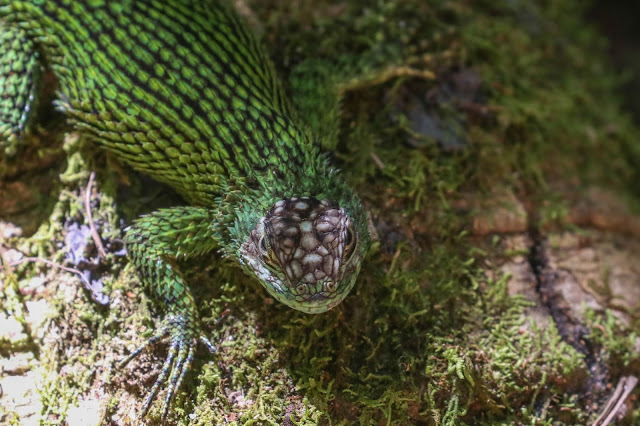 The guy at the entrance station looked up the lizard for us in a book, it's a green spiny lizard (aka emerald swift). 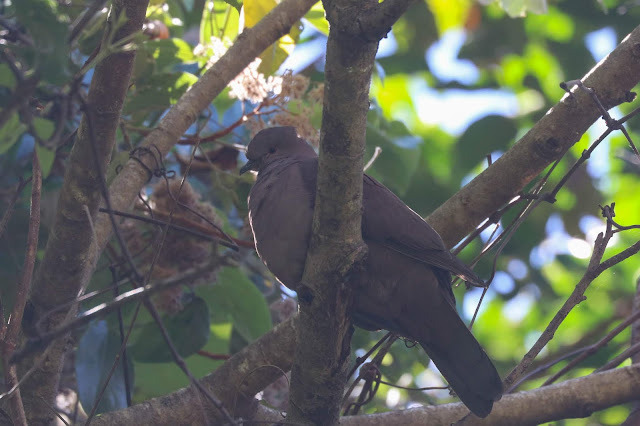 Jacob found this fancy feather on the ground: 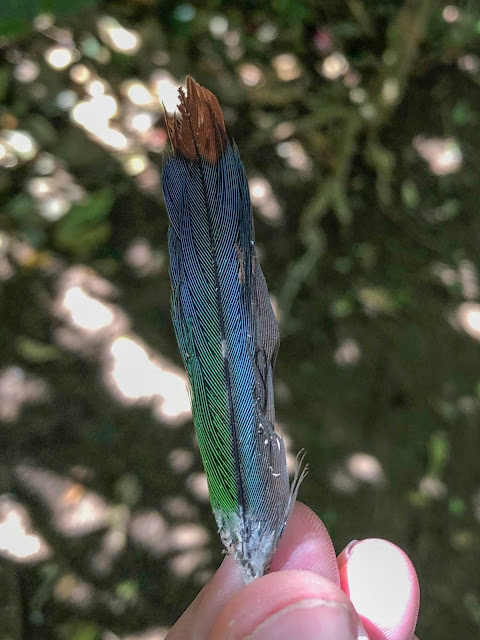 We had been hearing a Three-wattled Bellbird all morning as we had heard several times before on our trip.


It's a great sound and I enjoyed hearing it but seeing one would be amazing.  As we walked we heard one getting louder and louder till we were sure it was close by.  Someone finally got eyes on it and we were able to watch it actually make that crazy sound. 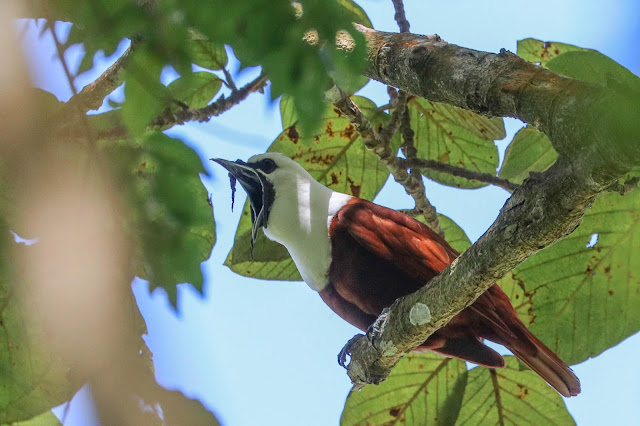 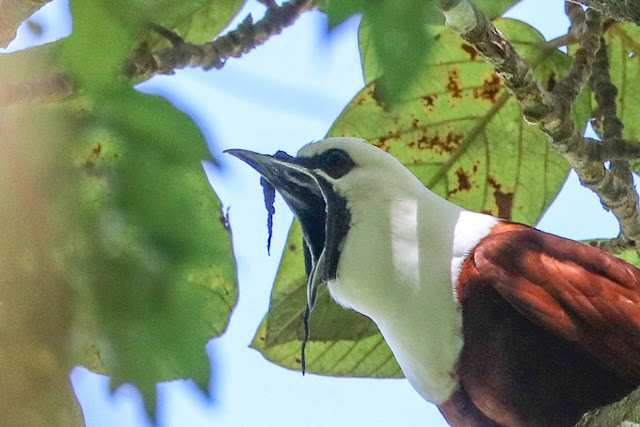 Those wattles!  That sound!  I'm sure he does well with the ladies, though wattles can grow even longer than his.  He turned around after a minute. 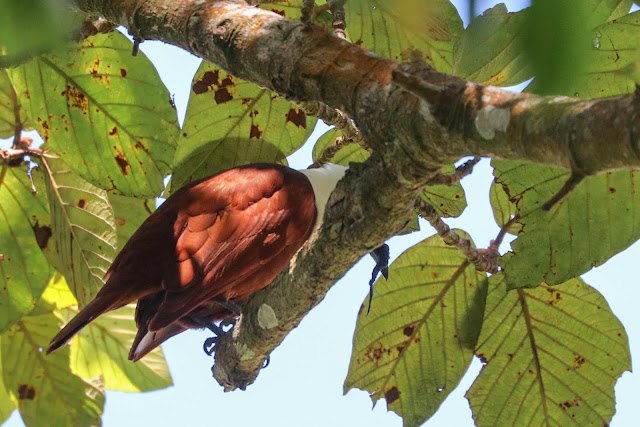 Amazing!  It wasn't too long after this that Caroline saw some kind of Mottled Owl/squirrel encounter that caused the owl to fly to a very distant but exposed spot.  I failed to see it several times as it kept moving, but finally I saw it. 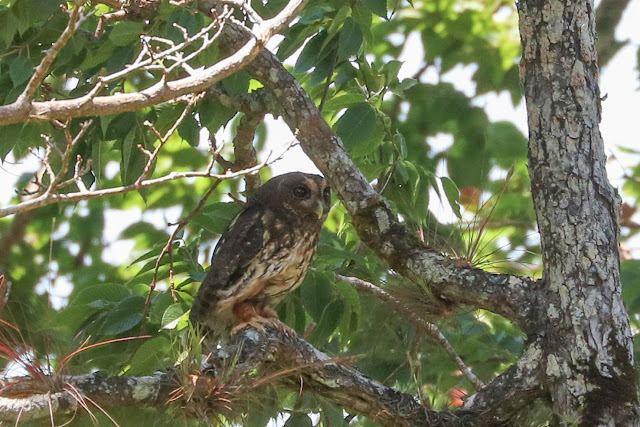 After hearing one several times and seeing them poorly it was redeeming to get a decent view.

Continuing with our good luck a few minutes later, someone noticed this Long-tailed Manakin moving around. 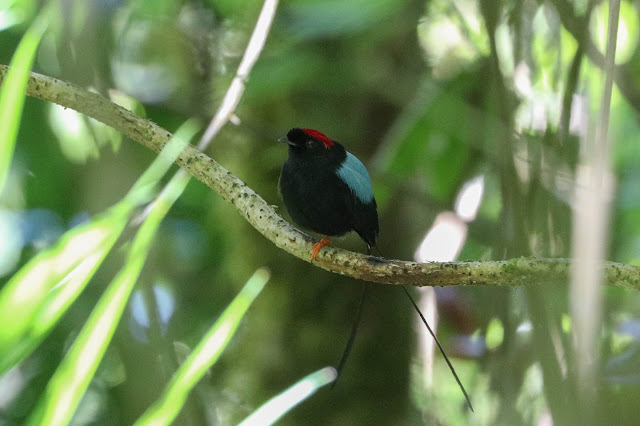 It coughed up something that looked like a seed and spit it out. 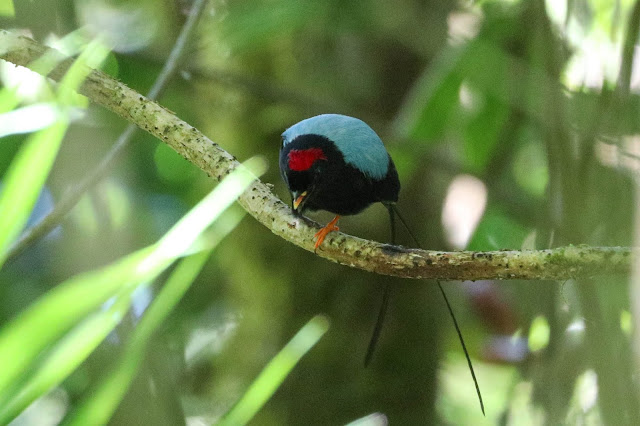 Not the fancy mating dance it is known for but still an interesting behavior. 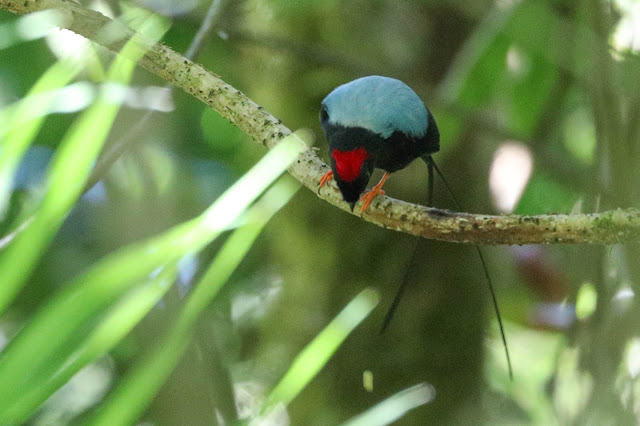 Whatever it coughed up falling down 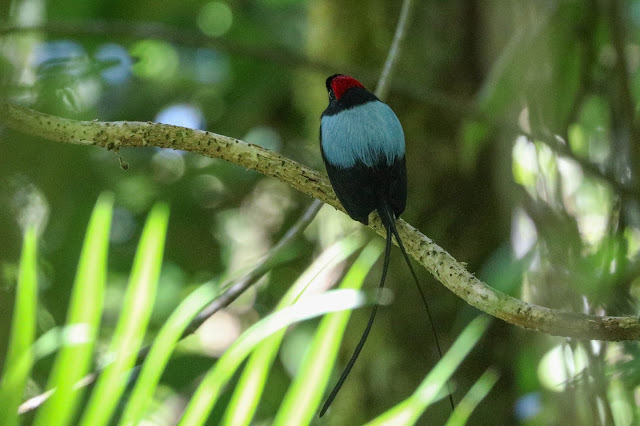 We passed this large tree limb on the walk back that was not there earlier... 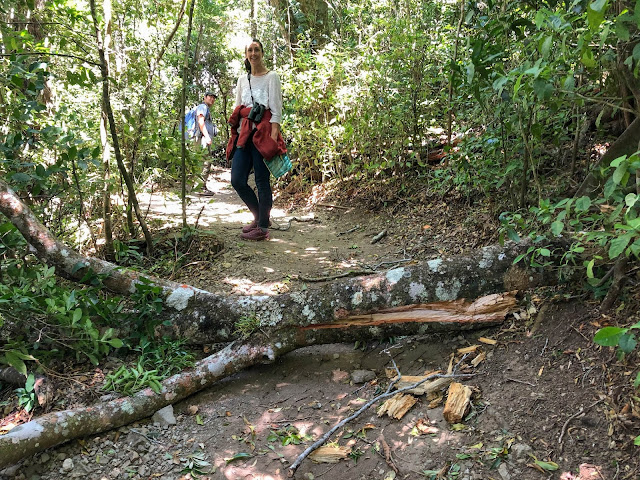 Back at the entrance station we enjoyed the jaguar statue where Jacob and I posed for our only photo of the trip. 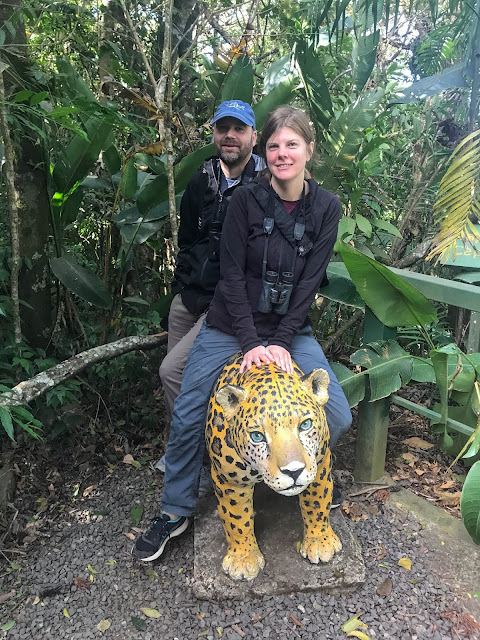 We stopped for lunch in town before heading out on the long windy nauseating drive back to San Jose.  The road passes briefly by the Gulf of Nicoya where we decided to stop for some trip birds like Magnificent Frigatebird, Brown Pelican, Willet, and Laughing Gull.  A random birding tour group arrived shortly after us and Steve enjoyed disagreeing with their leader on gull ID.  A major highlight was seeing this Scarlet Macaw fly over: 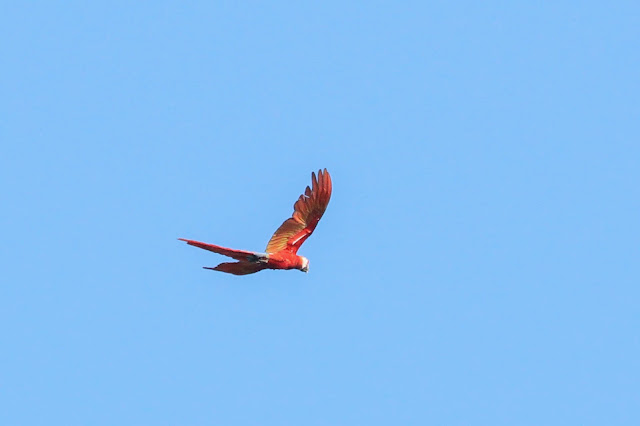 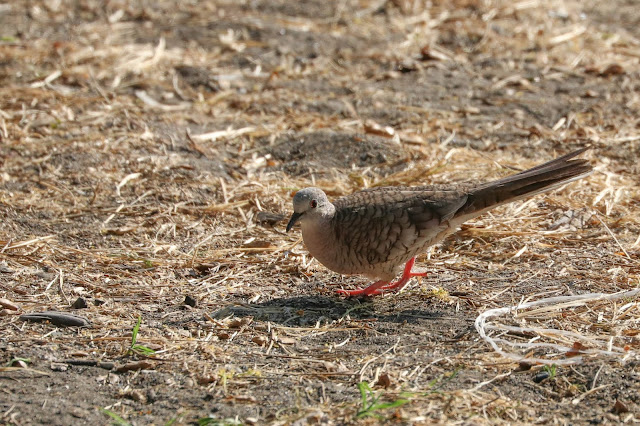 Inca Dove on the beach, my final bird photos of the trip

Complete checklist from this spot here.

We finally arrived at our final Airbnb for the night, a cute little spot close to the airport.  Some people, not me, saw a Ferruginous Pygmy-Owl and Cinnamon Hummingbird in the yard.

Overall it was an amazing trip!  I was shocked to have almost 250 lifers out of my 371 trip birds.  I think the group tally was around 400.  Many many thanks to Steve for organizing and to Caroline for being able to see birds so well!  Good times!!!
Email Post
Labels: Blue-vented Hummingbird Brown Jay Gray-cowled Wood-Rail Inca Dove Long-tailed Manakin Mottled Owl Ruddy Pigeon Scarlet Macaw Three-wattled Bellbird Yellow-throated Euphonia