Last weekend Jacob and I joined Oregon Pelagic Tours for an all-masked half-capacity 8-hour trip out of Newport.  Weather reports showed clouds with a chance of rain and the ocean conditions sounded rough with a hazardous seas warning.  I was a little nervous this might be my first time getting sick despite taking Bonine.

Thankfully it never rained on us and the despite the 8-10 foot swells I never felt sick. Things started off slow with a few Sooties here, a couple Pink-footeds there, and eventually a skua.  Most pelagics I have been on have only turned up one or two skuas but this trip had at least five.  We saw a couple mola molas early on. 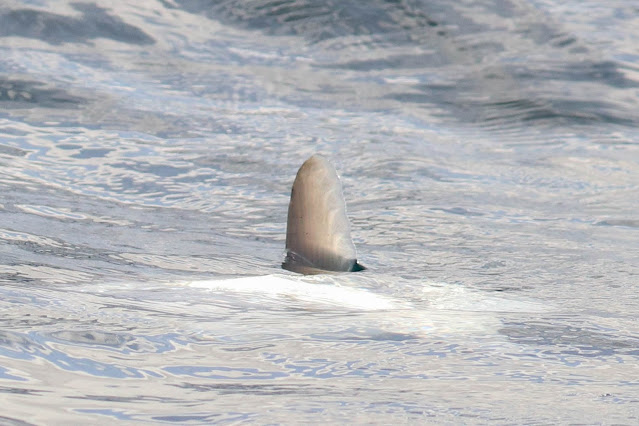 Our first Buller's Shearwaters came by along with a bunch of Sabine's Gulls and Red Phalaropes. 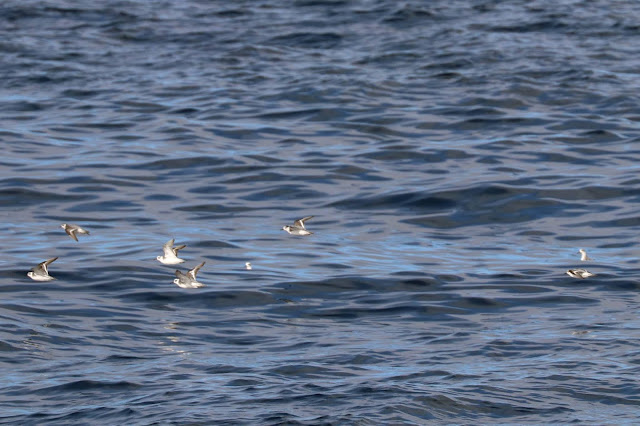 We were approaching some distant fishing vessels as bird activity picked up and another South Polar Skua flew by close to the boat. 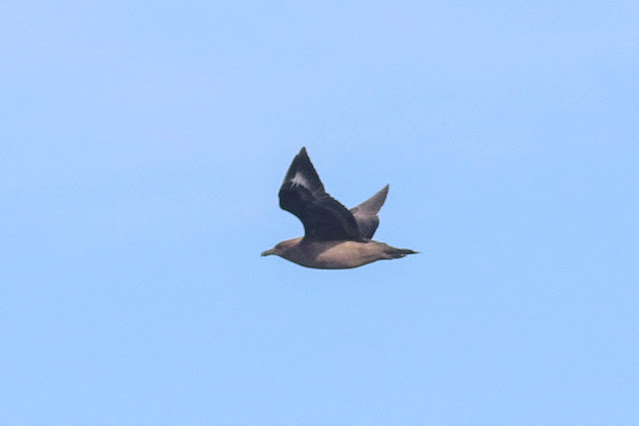 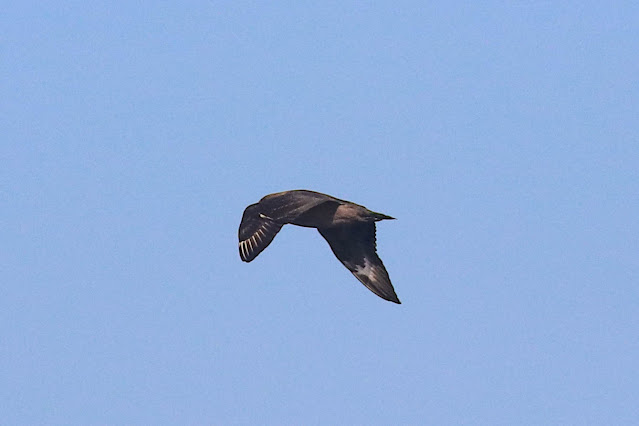 I was very excited to get my first Oregon Flesh-footed Shearwater soon after: 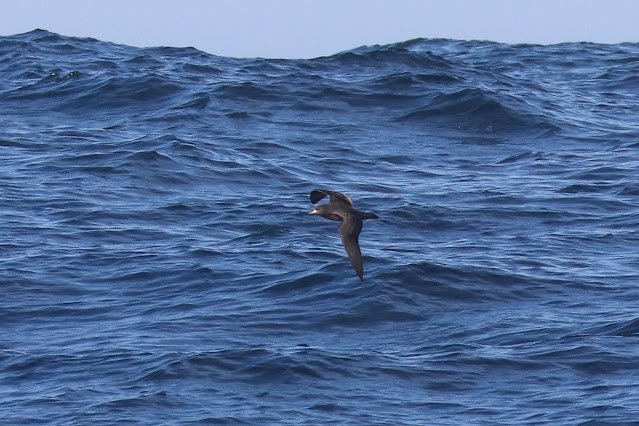 Black-footed Albatrosses began to appear in good numbers and I managed some combos with a fur seal and a Pink-footed Shearwater: 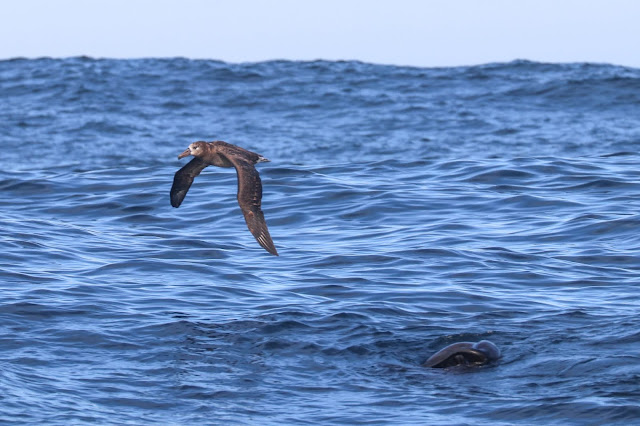 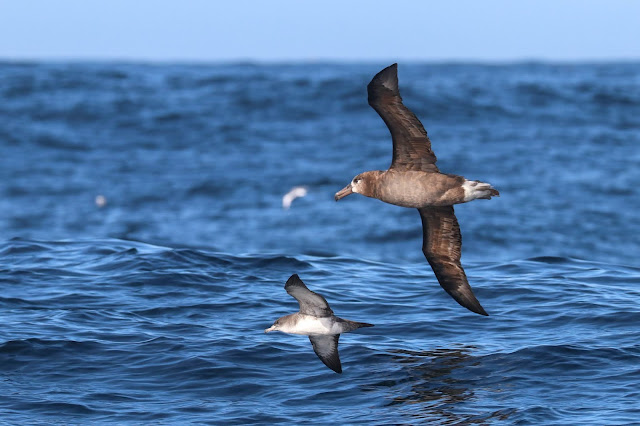 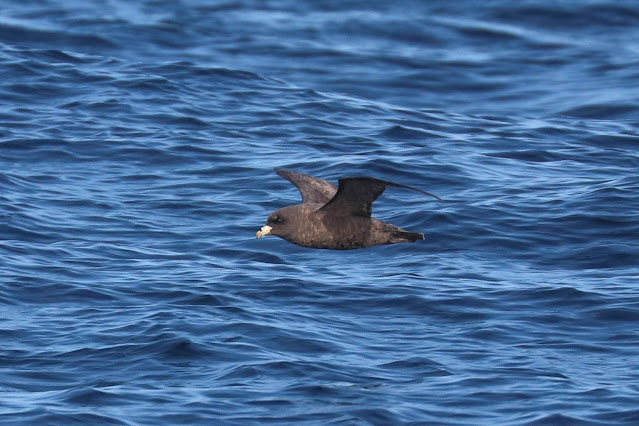 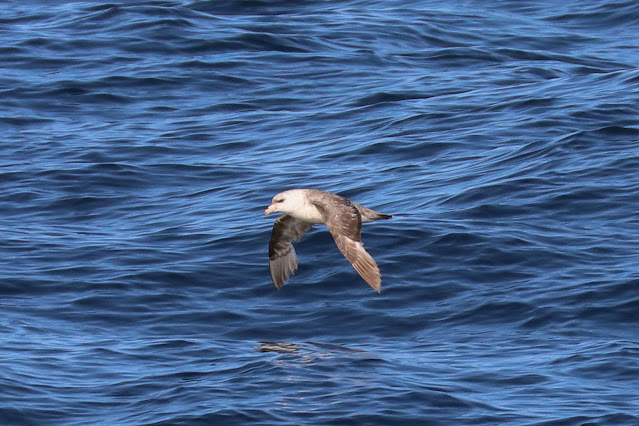 Sabine's Gulls flew close by as we entered the fishing vessel area. 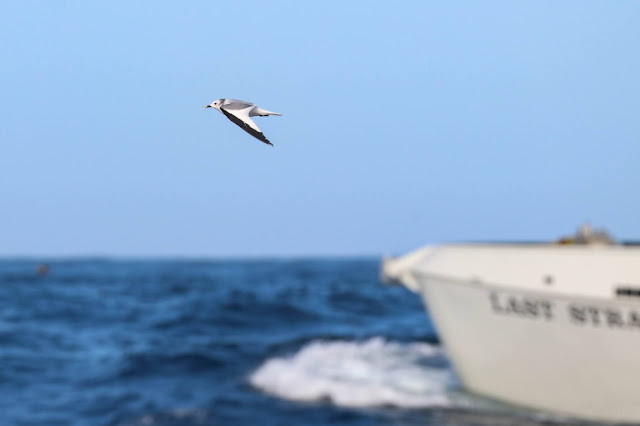 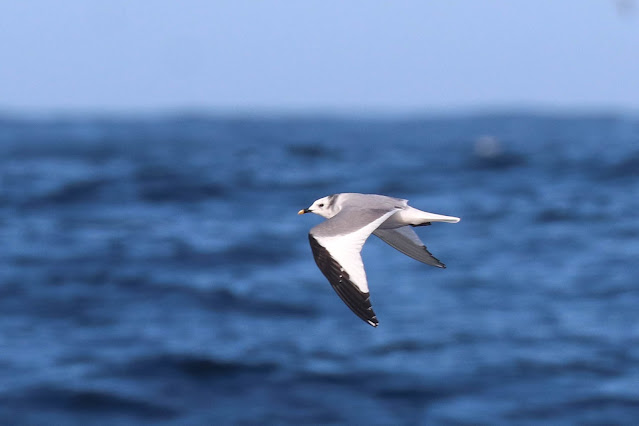 The bird frenzy consisted of hundreds of Black-footed Albatross, hundreds and hundreds of shearwaters, fulmars, gulls, a few Fork-tailed Storm-Petrels, an Arctic Tern, and oh yeah, did I mention jaegers? There were lots of jaegers with Pomarine the most abundant. 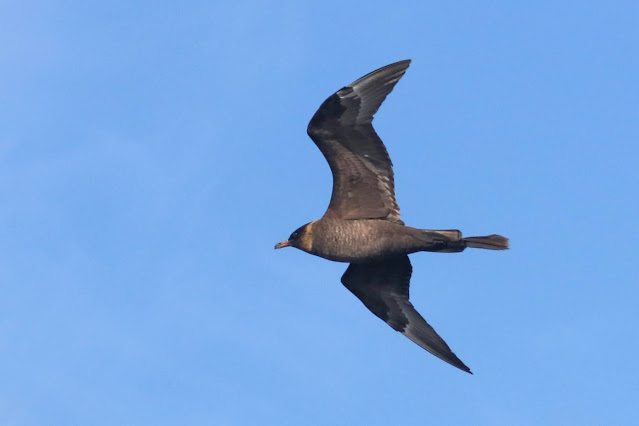 A few flew close by the boat but sometimes there was just a pile of them sitting on the water. 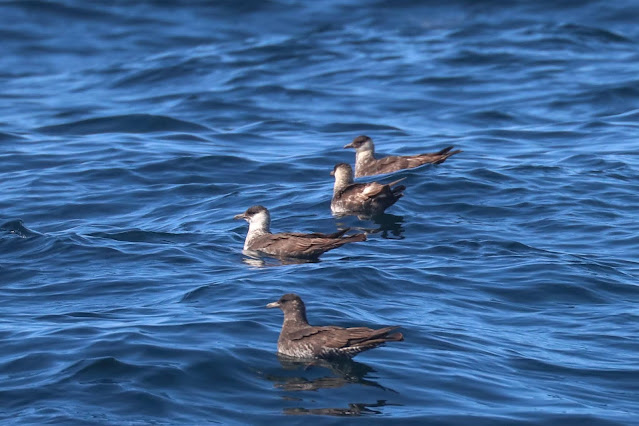 The bird frenzy also turned up a couple Laysan Albatrosses, another state bird for me! 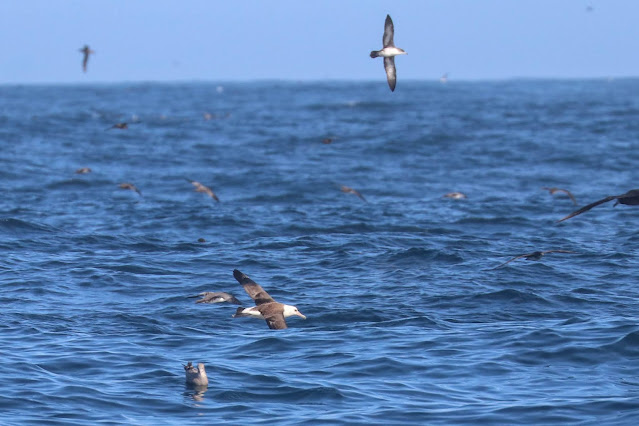 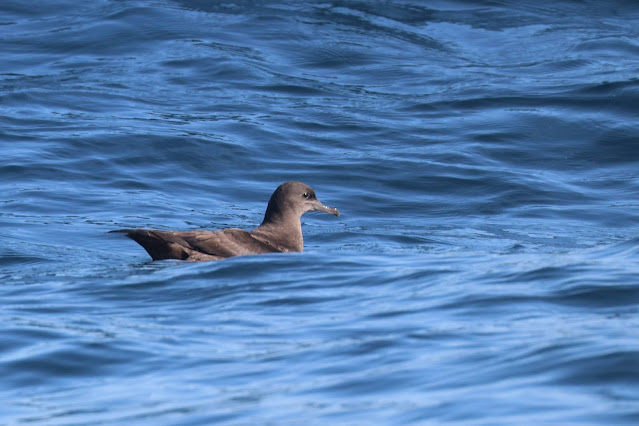 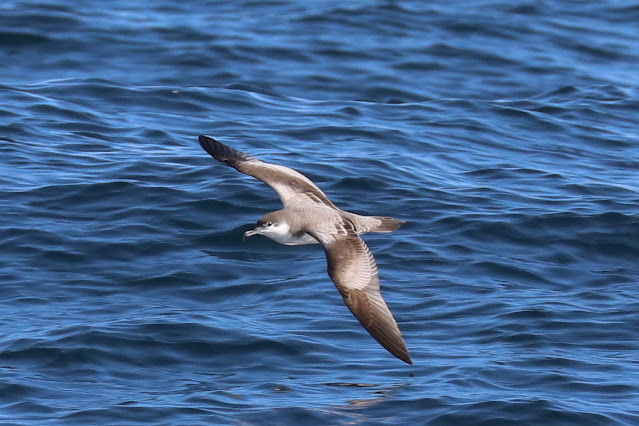 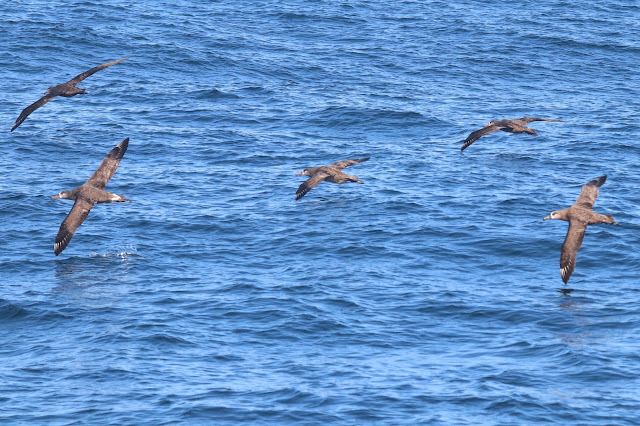 The guides decided not to chum because all the birds were flying around us anyway.  It was a little overwhelming trying to sort through them all. 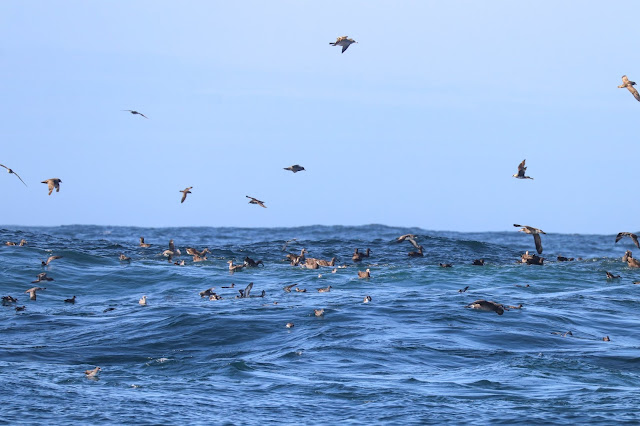 We ran out of time eventually and began the long ride back to Newport.  A bonus bird on the way back was this non-breeding Tufted Puffin that sat calmly on the water for us: 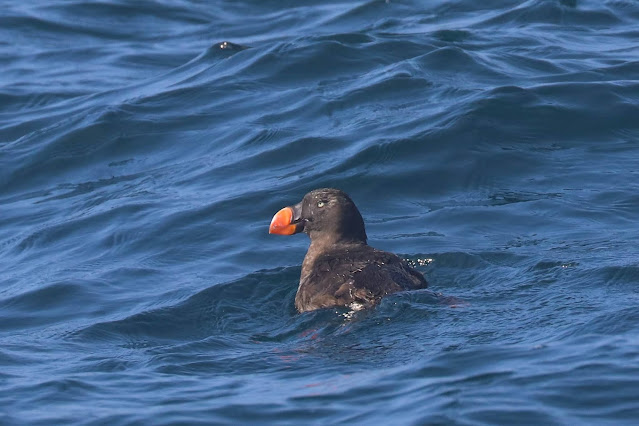 It was a great trip with all the expected birds and then some! Complete trip results can be found on the OPT website here. Good times! 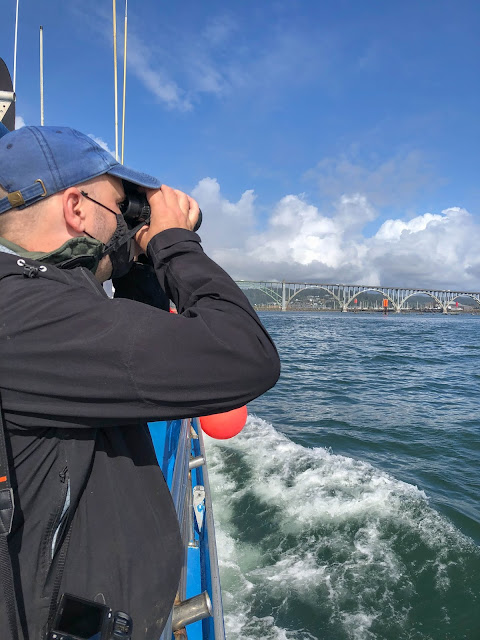