Ten days ago things were as normal as possible. 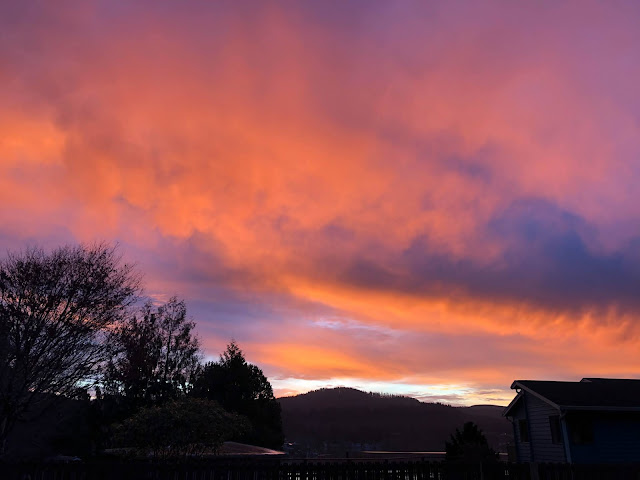 My morning dog walks in Lincoln City were corresponding with fantastic sunrises and the birding around town was pleasant with good weather. 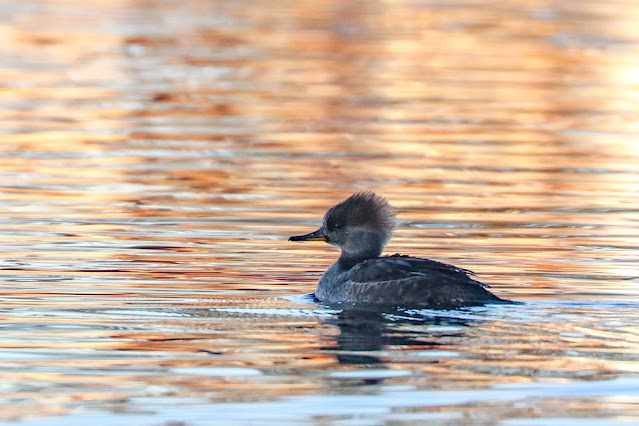 Jacob and I walked the trail on Alder Island at Siletz Bay NWR Friday afternoon under sunny skies. 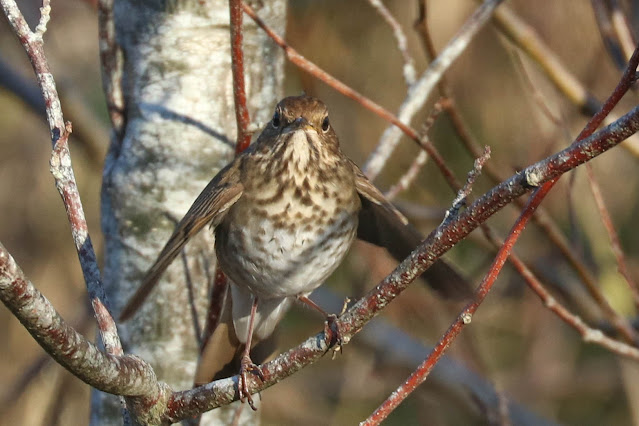 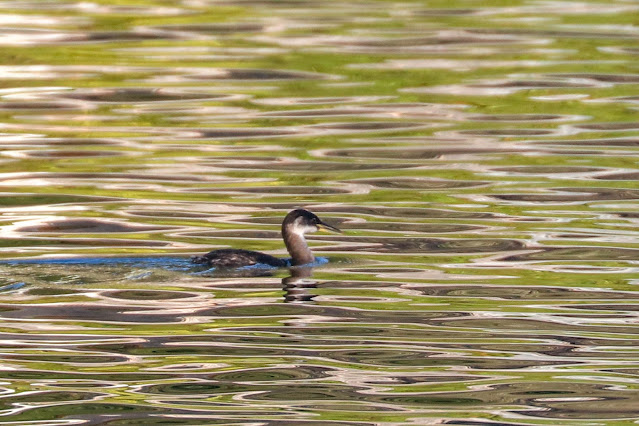 The main highlight came towards the end of our walk when we noticed a kestrel perched on top of a tree eating a rodent.  It didn't seem to mind an audience and tore into its meal for a long time. 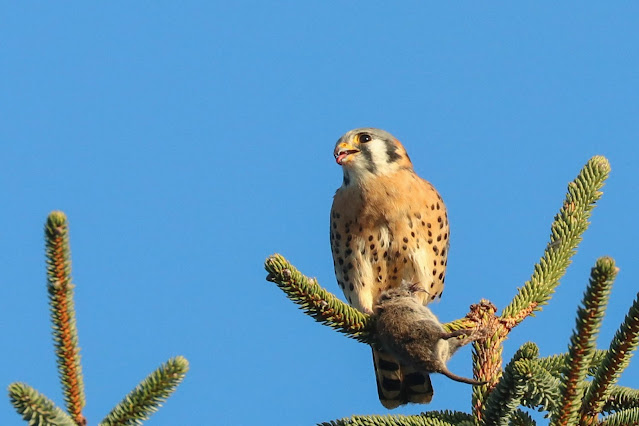 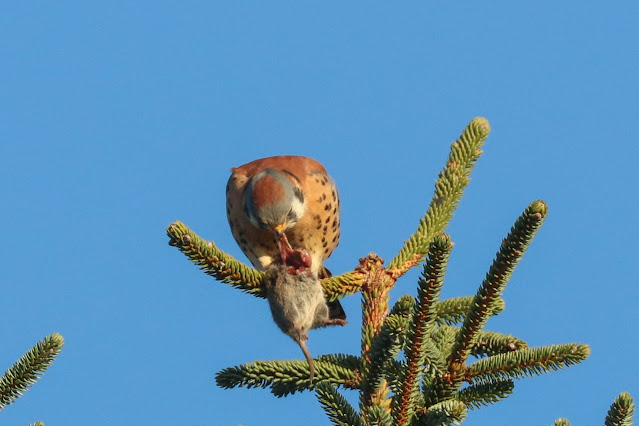 On Saturday we planned to drive down to Douglas County so I could work on my list there.  Unfortunately in the morning Jacob didn't feel well so I packed my food and went without him.  My first stop was the boat ramp at Carter Lake. 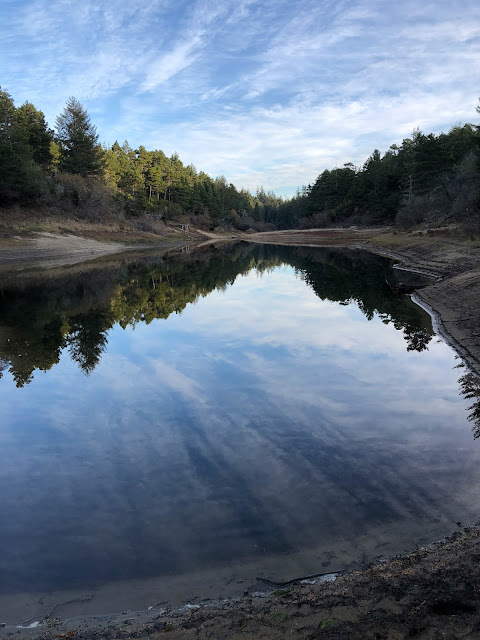 I had five county birds here including Varied Thrush and Pine Siskin.  Next was the Tahkenitch Lake spot that has a small dock where I added Pied-billed Grebe and coot.  Finally the spot I was most looking forward to, Fivemile Road that runs along another part of the lake. 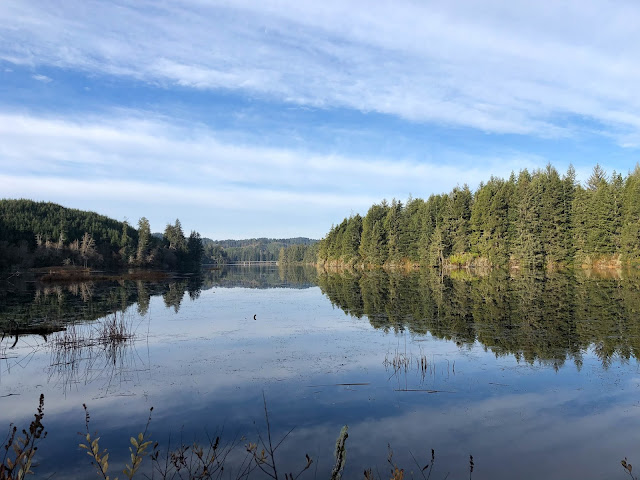 I only had four new birds here but it's such a nice area to explore with no humans to deal with. 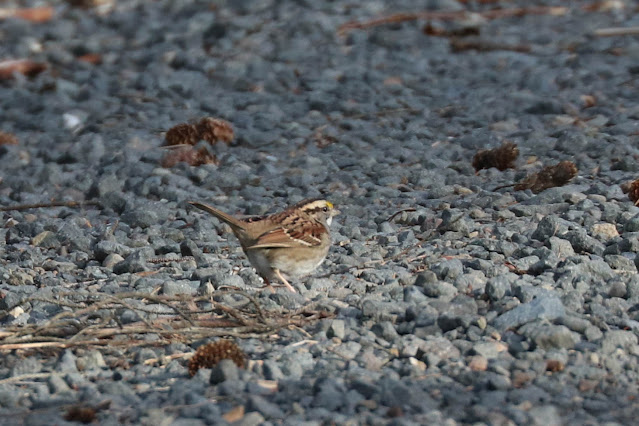 The real highlight here was not a county bird but rather a Wrentit that insisted on singing out in the open and did not mind me creeping on it. 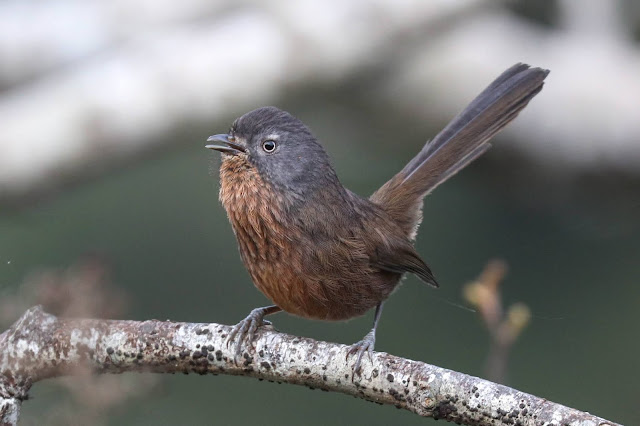 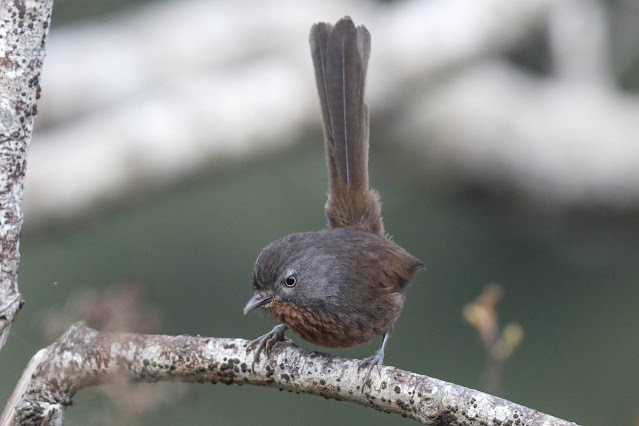 From here I headed south on 101 stopping in Gardiner when I thought I saw a shrike in a field.  It turned out to be a kestrel which I also needed for the county, plus a few bonus Western Meadowlarks.  The waterfront in Gardiner yielded my county pintails and Green-winged Teals before I continued on to Stables Road. 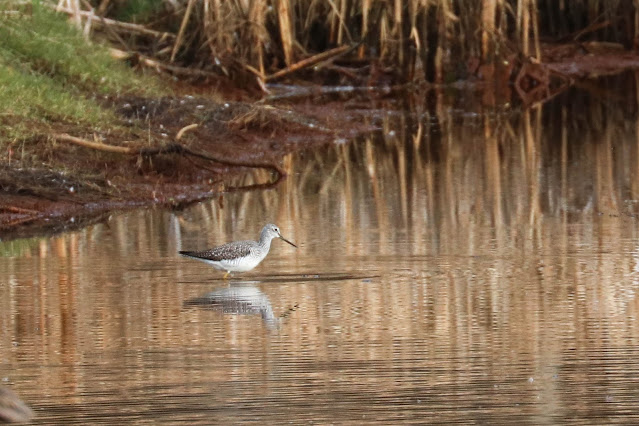 Greater Yellowlegs was one of six county birds here, the last being some surprising Redheads. 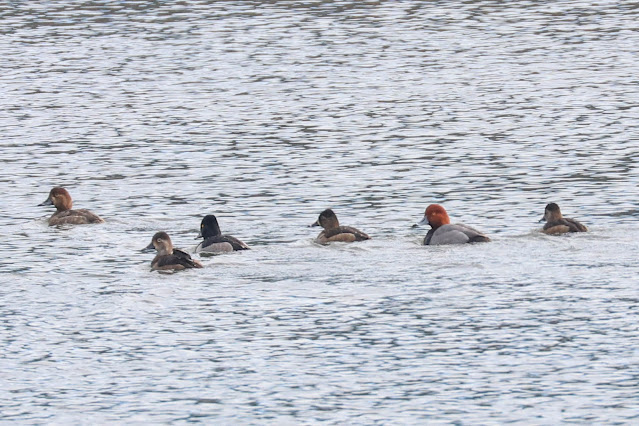 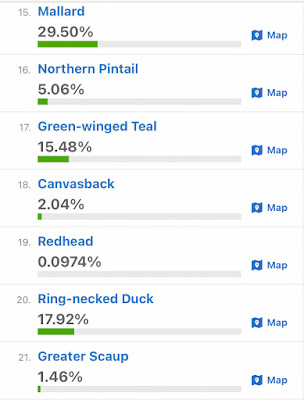 I continued south to Winchester Bay and gave myself thirty minutes to look for the White-winged Dove seen earlier in the week.  No luck but I got my county House Sparrows.  The nearby Salmon Harbor Marina gave me my 100th Douglas bird, a Western Grebe.  My last county bird (#106) was a Red-shouldered Hawk on my way north out of Gardiner. 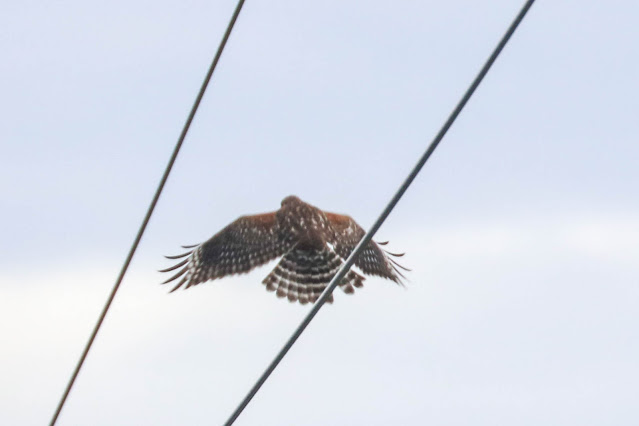 When I got home I realized Jacob was sicker than I thought.  He moved to the upstairs bedroom to hopefully keep me from getting sick.

Sunday I mostly putted around the house in the morning and took my kayak out in the afternoon. It was another pretty day and I was able to avoid humans again. 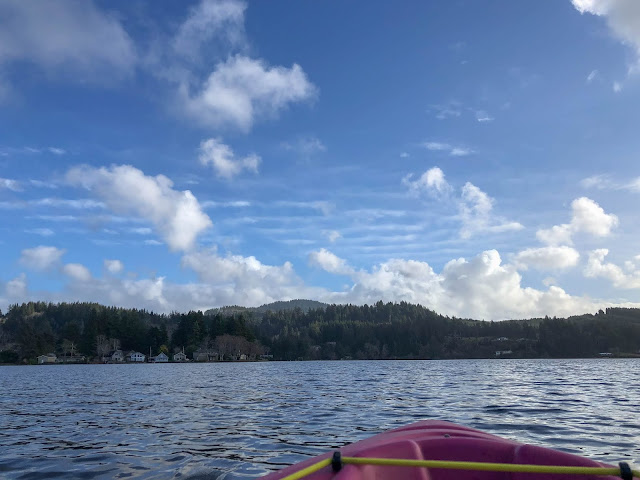 Monday Jacob was still very sick.  He made an appointment for Tuesday to get tested for Covid while I stuck to birding from the car and the house. 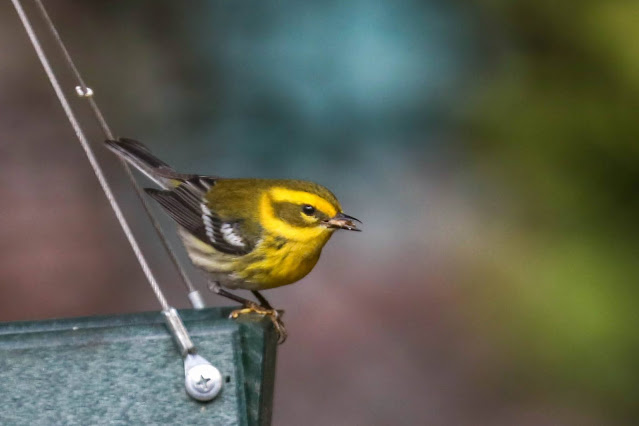 Townsend's Warbler in the seed feeder

I got to watch Jacob go through the drive-through Covid testing site across the street from our house. 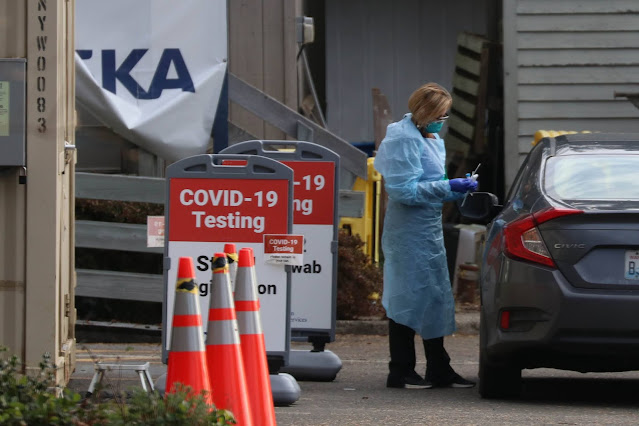 They didn't have rapid testing there so we had to wait for results.  I birded some local spots where it's easy to avoid people, like the end of Savage Road in the Salmon River Estuary.  This spot hasn't been too exciting for me in the past but on Wednesday morning it was hopping. 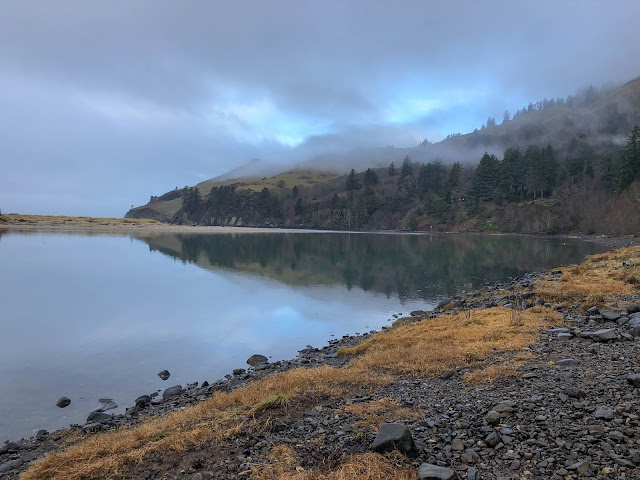 Cascade Head straight ahead, to the left the river meets the Pacific 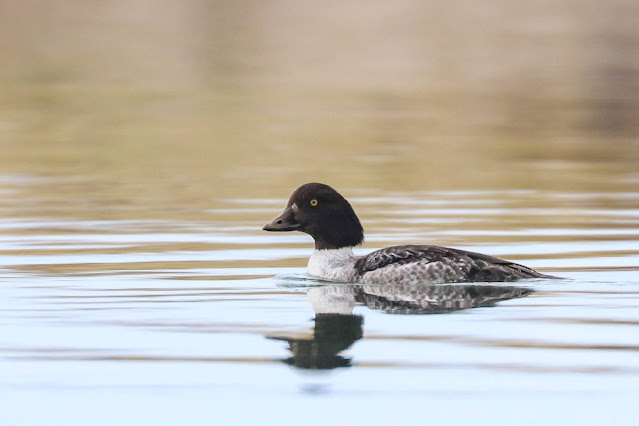 This goldeneye came pretty close to me and I didn't give it much thought, assuming it was a Common.  Of course Seagull Steve corrected me when I posted it on Instagram.  It's a Barrow's Goldeneye with that head shape and slope to the forehead plus the smaller bill size. 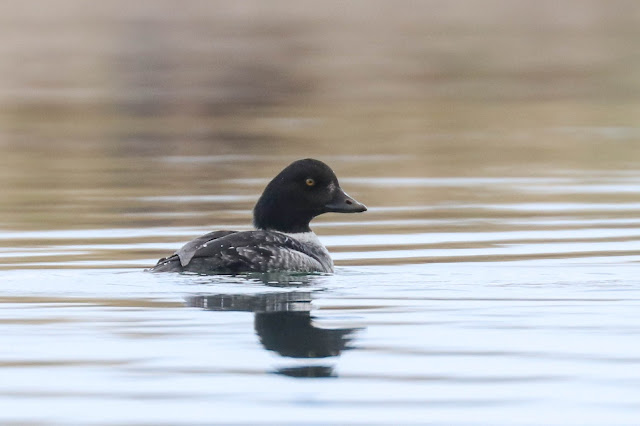 Later on the bird joined two Common Goldeneyes and a couple of scoters. 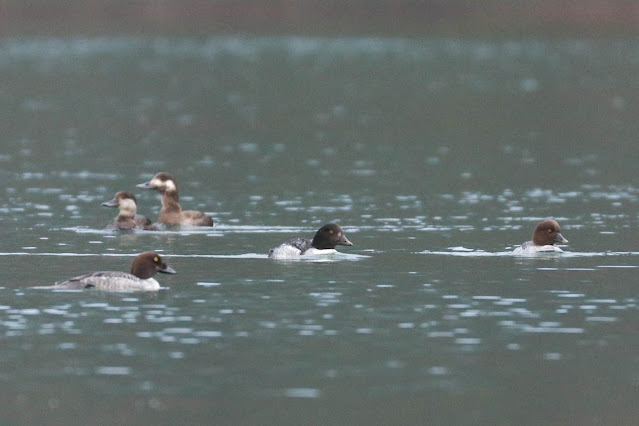 Barrow's in the middle.

Those scoters in the back made a funny pair and kindly came closer as well. 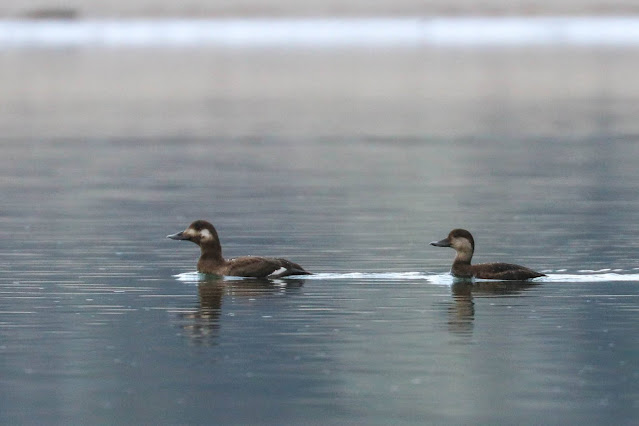 A Spotted Sandpiper was hanging out along the shoreline here. 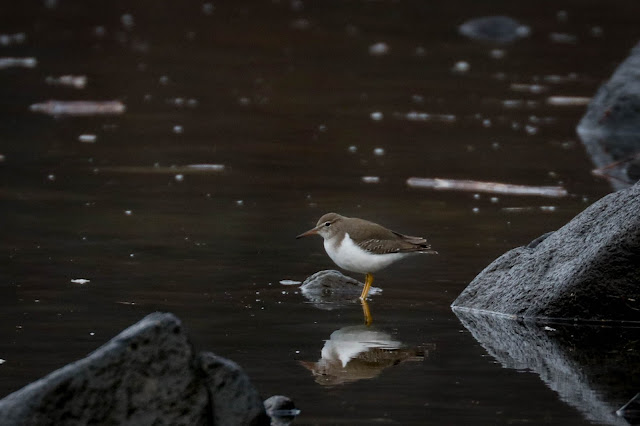 This was extra cool because this spot is in Tillamook County and I knew it was a county bird. What I didn't realize was that Black Scoter was also a county bird, as well as my misidentified Barrow's Goldeneye.

On days when this spot isn't birdy I can easily spend a lot of time turning over rocks and looking at all the crabs.  It's a major crab spot.  A group of Hooded Mergansers was taking advantage of this fact. 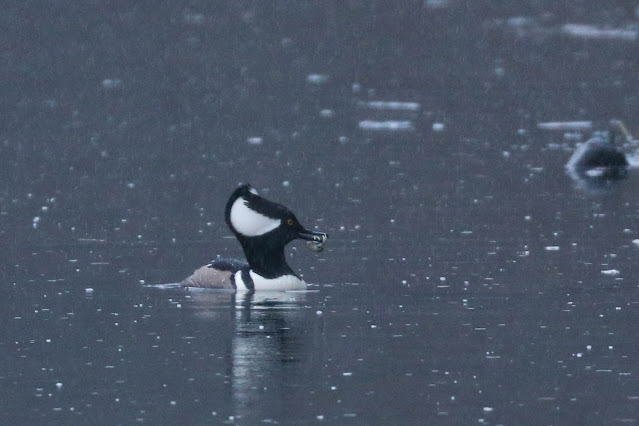 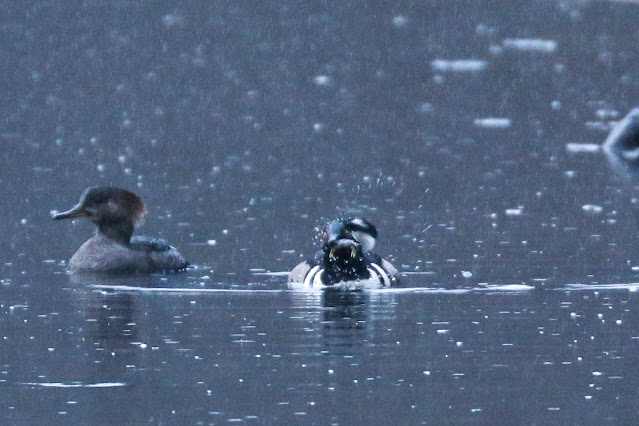 It had gotten very dark and rainy by this point but I like the pictures anyway.

After that I stopped by Knight Park to watch some river otters in the rain then headed home.  In the afternoon Jacob got his Covid results: positive.  My stepson back in Vancouver also tested positive that day.  We headed back to Vancouver Thursday morning where it's easier to have groceries and food delivered.  I tested positive Friday. 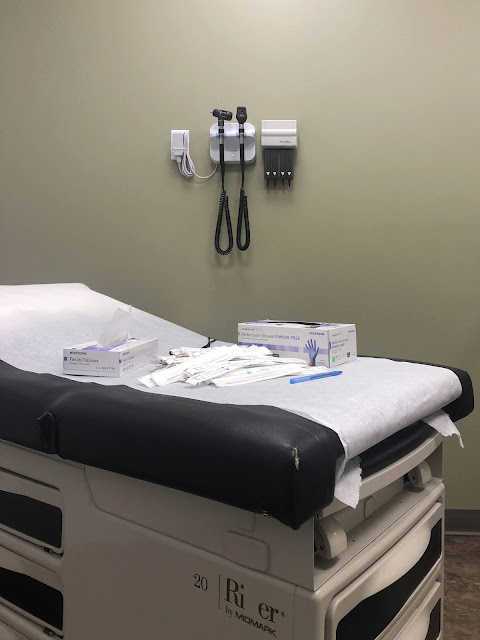 It's frustrating for many reasons but I am trying not to dwell on it.  For now I am grateful I only have mild symptoms and Jacob seems to be improving.  We can afford to have food delivered and have birds to watch out the window. There are books to read, Netflix to watch, board games to play.  It's December.  My quarantine will be done on the shortest day of the year and from then on it will keep getting brighter.