on July 10, 2012
I survived my camping trip with the dogs this weekend.  I had fun but it was not without some troubles- the heat felt brutal in the afternoons, Jake got covered in sap, I got stung on the palm of my hand by something, I missed the Chestnut-sided Warbler despite camping a hundred yards or so from its hangout... 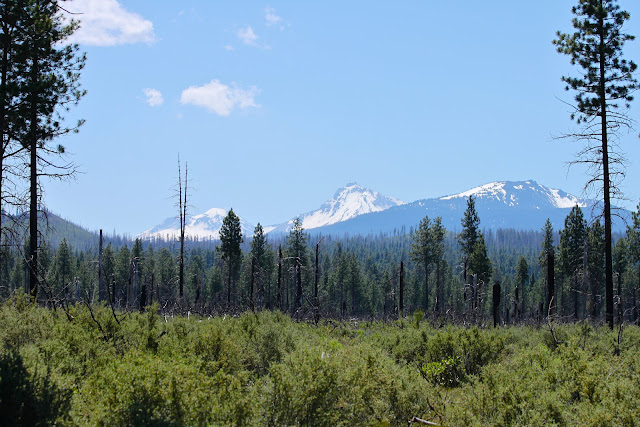 The areas I visited were all parts of different burned areas, the first being the GW Burn.  I realized quickly that the most abundant birds there (and everywhere it seemed) were Chipping Sparrows.  I briefly tried to turn a juvenile into a variety of different sparrows before it clicked that it was just a chippy young lad.... 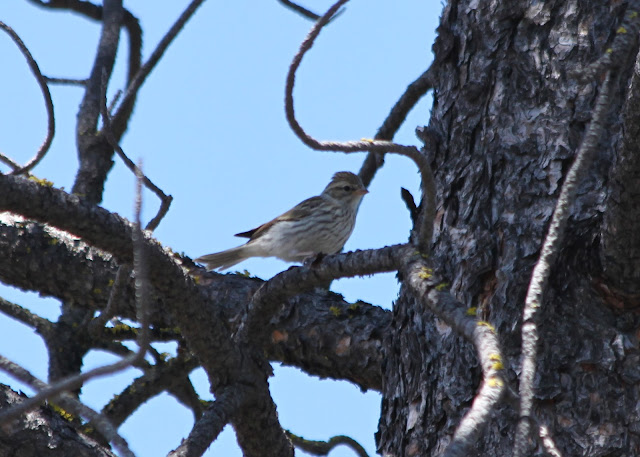 This burn area turned up a nice little variety of woodpeckers for me...  I believe this fellow is a Red-naped X Red-breasted Sapsucker hybrid, but am not positive: 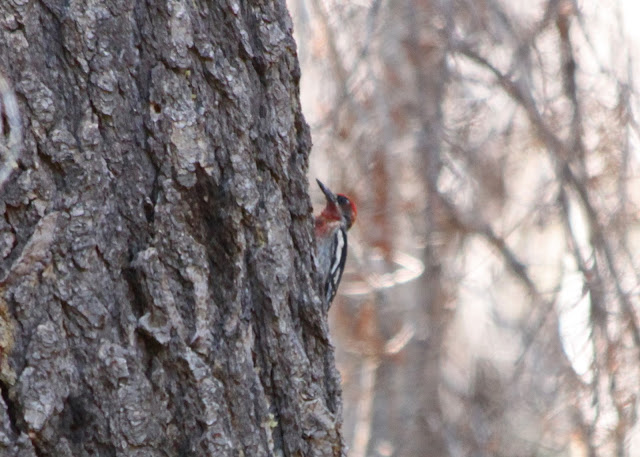 I was happy to find several Lewis's Woodpeckers in this area too: 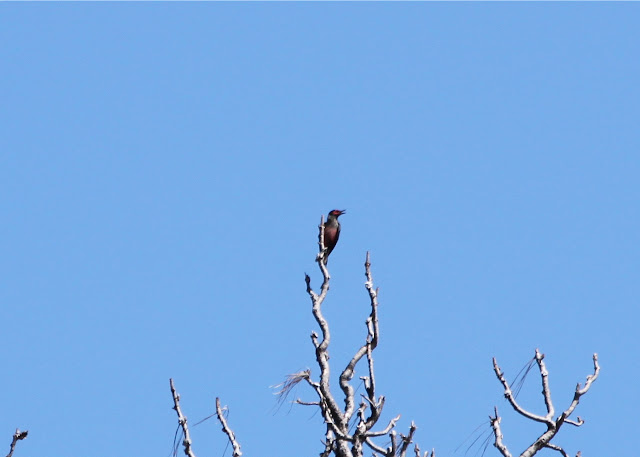 I watched one of the woodpeckers get chased by a hummingbird from one tree to another.  It looked like the hummer was dive-bombing the woodpecker until they both landed in the same tree, and the hummer took off.   I had never seen this before.

After setting up camp at Indian Ford I took the dogs for a walk in the trees around Cold Springs Cutoff.  It was fairly birdy with nuthatches, Western Bluebirds, more Chipping Sparrows, flickers, and Mountain Chickadees... 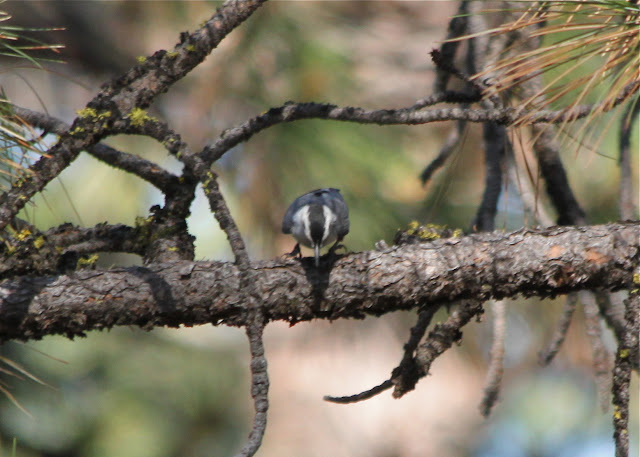 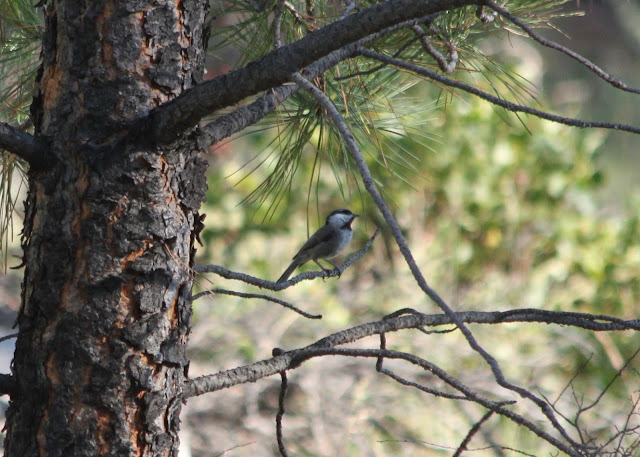 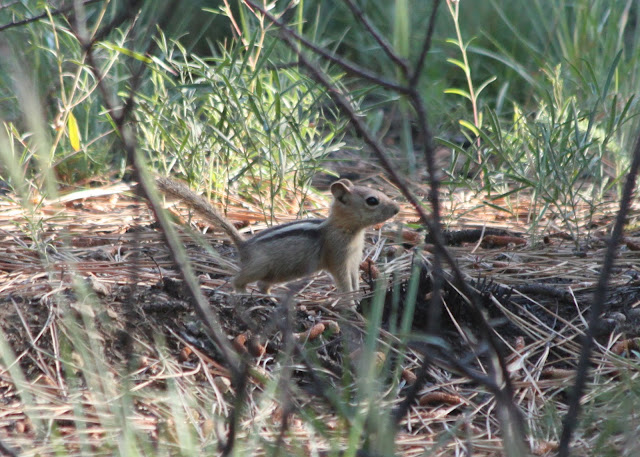 The next morning we headed to the Rooster Rock Burn, south of Sisters.  The first hour or so was a bit frustrating- I'd hear a woodpecker and head towards the sound only for the sound to stop and no bird to be seen. 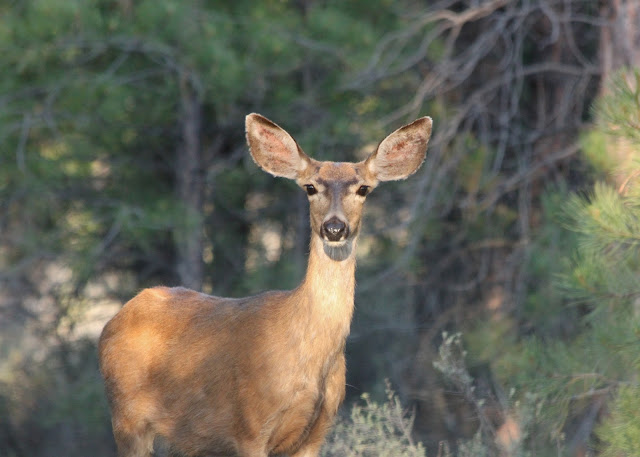 Eventually I found a few birds, like this flycatcher: 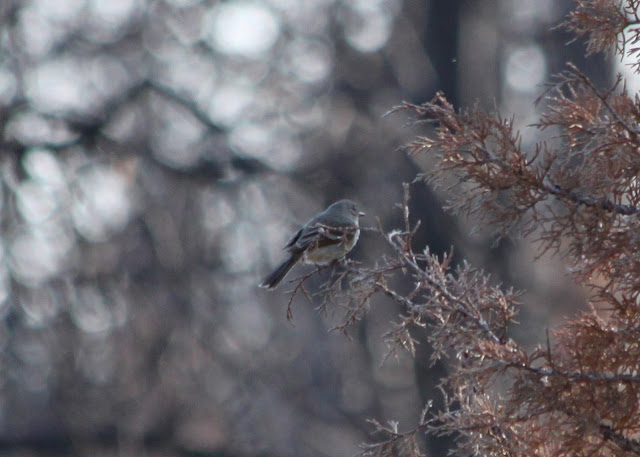 There were lots of Pygmy Nuthatches in this area and I watched one pluck a little wormy thing out of some pine needles.  He could not seem to figure out how to eat it though- I even saw it wrap around his beak briefly. 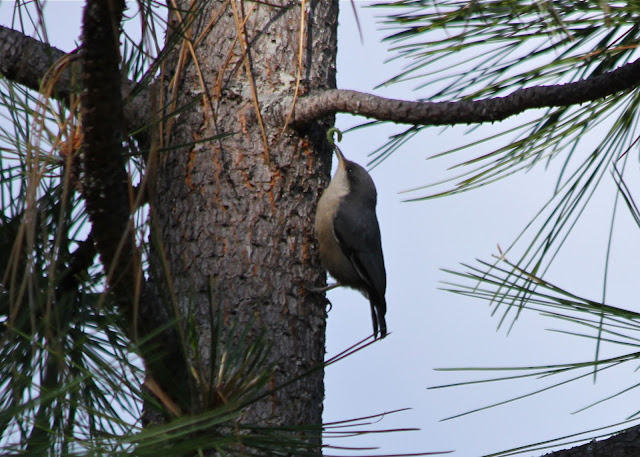 I saw a lot of young bluebirds on this trip.  In this area there was a Mountain Bluebird papa around so I felt confident that the young ones were Mountains as well. 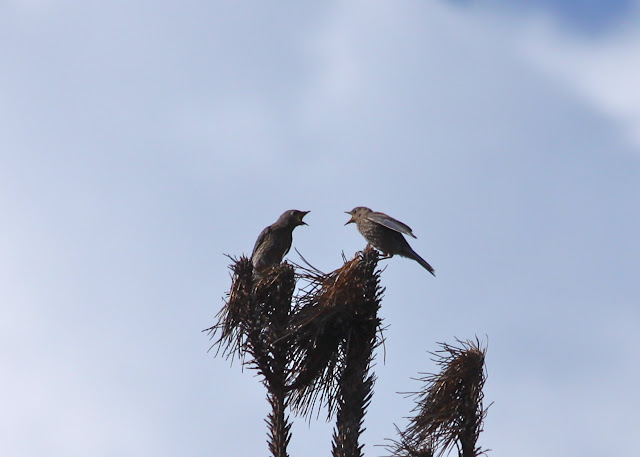 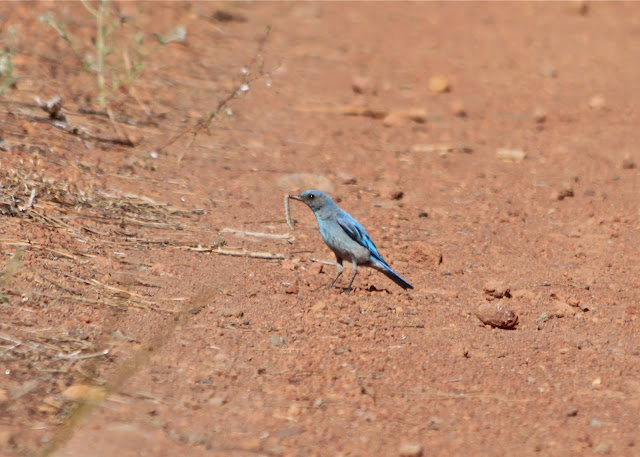 Nearby I heard woodpeckers pecking and was psyched to find a trio of Black-backed Woodpeckers! 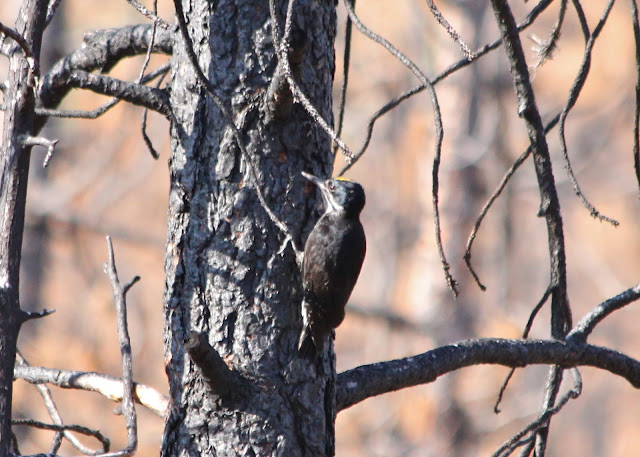 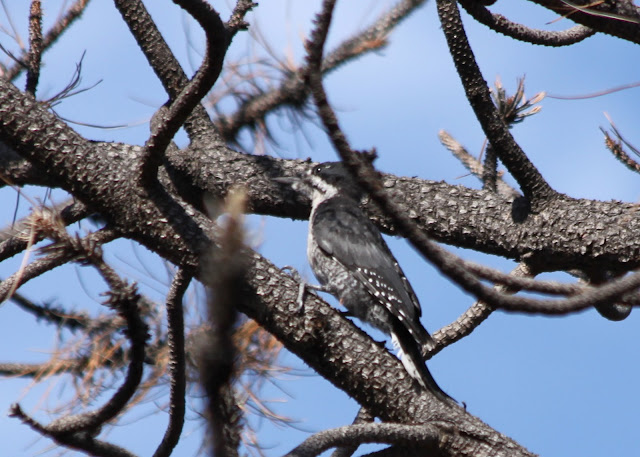 They were not at all interested in getting their photos taken.  Also around were cowbirds, ravens, Cassin's Finches, Hairy Woodpeckers, flickers, and Mourning Doves.  After a few hours in this area I headed back through Sisters and stopped at Forest Road 1018 (also called Trout Creek Butte Road I think).  After a snack I took the dogs for a walk around an area where I had seen White-headed Woodpeckers on previous trips.  Sweet success!! 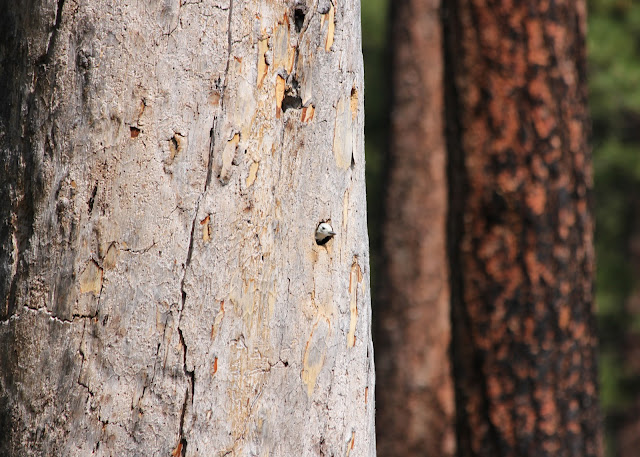 The dogs and I were sitting in a shady spot when I heard some knocking but could not see a woodpecker anywhere.  Until a little white head popped out of that hole! 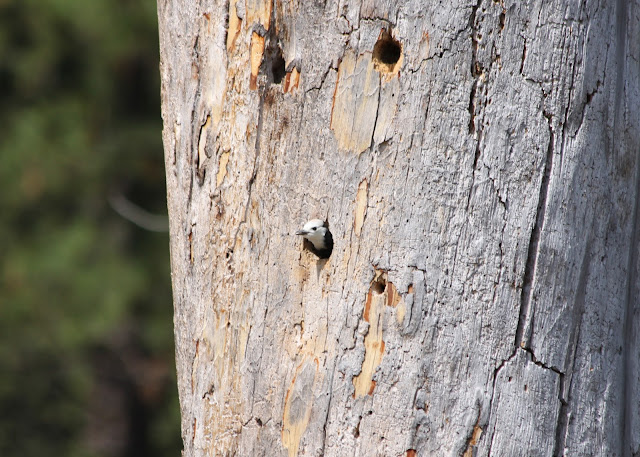 So cute.  I saw two more in the nearby trees, but no good photos.  The last major area I wanted to explore was the Shadow Lake Burn which occurred last summer.  I had actually photographed the smoke from the fire when I was on my way back from Malheur NWR in early September, so I was psyched to see what things looked like now. 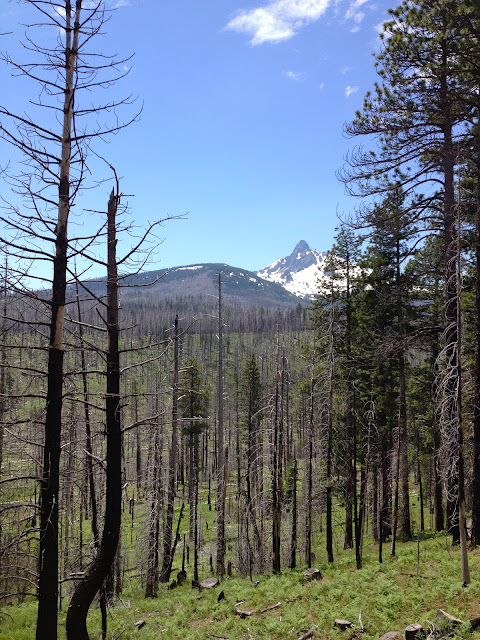 This was the most frustrating area I birded- I heard so many woodpeckers and could only locate a single Hairy Woodpecker.  I had really hoped for American Three-toed or even some Williamson's Sapsuckers, but no...  Sure saw a lot of Steller's Jays though... 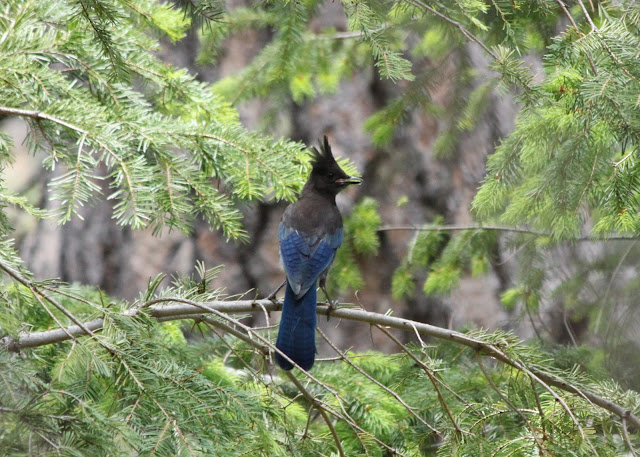 There were a couple of Rufous Hummingbirds zipping around too but only fuzzy photos... 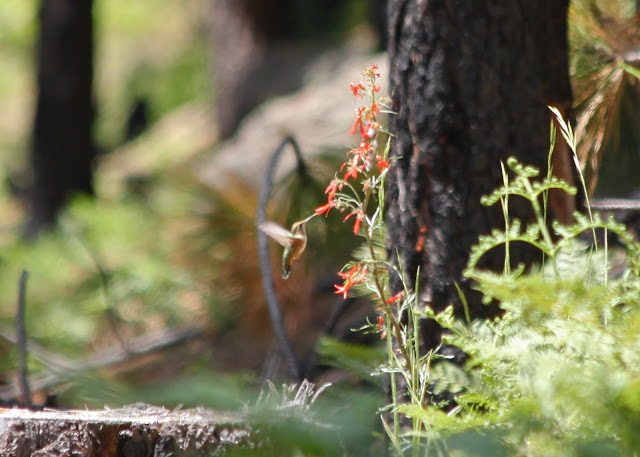 After several hours around this area the dogs were panting so loud I couldn't really listen for woodpeckers anymore.  We all chugged some water and got on the road to home.