Random stuff from the last month.

on December 03, 2017
A month ago I went to Newport with some friends to chase a bird that goes by the name Mr. Costa, rather unimaginative compared to his yard companion's name of Piglet (an Orange-crowned Warbler).  Anyhow, we showed up and the bird was there and birding was easy that day. 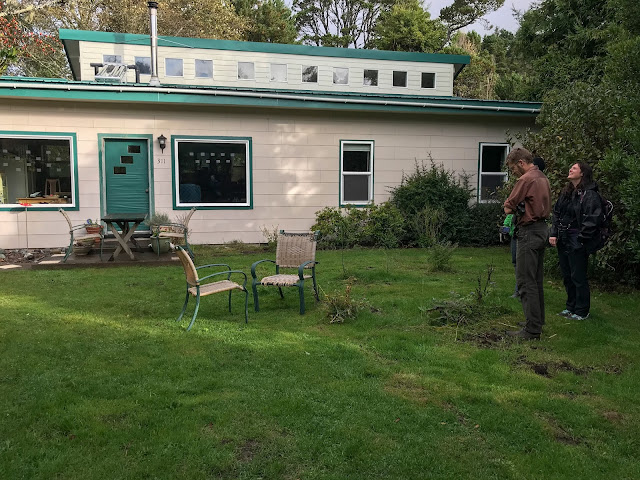 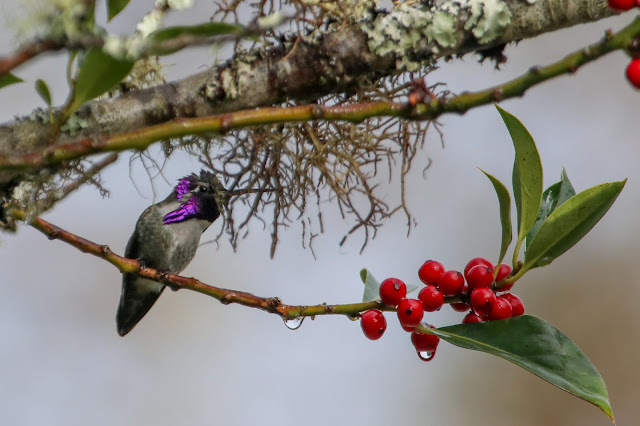 I haven't had a lot of interest in chasing birds lately but having dipped on this Costa's back in March with Audrey I was determined to finally look at it.  We walked up the road so Sarah could get Audrey her state Virginia Rail and found some other stuff too, like a Red-shouldered Hawk. 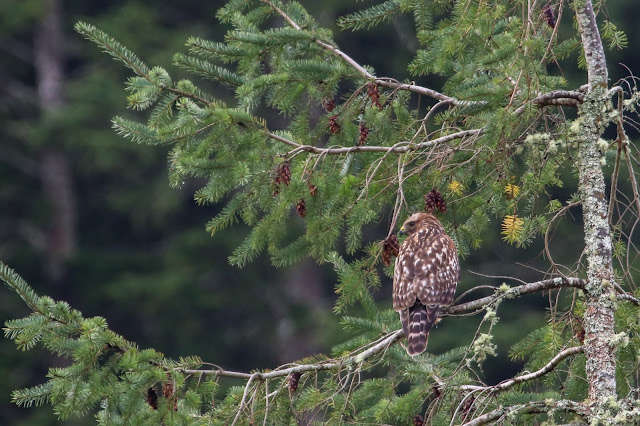 Because of this weird lack of interest in chasing birds I could not muster any sort of excitement when a Virginia's Warbler showed up in Portland.  Ten days after it was first reported I finally went to look at it with Jacob.  It showed up at a suet cage exactly as reported.  Meh. 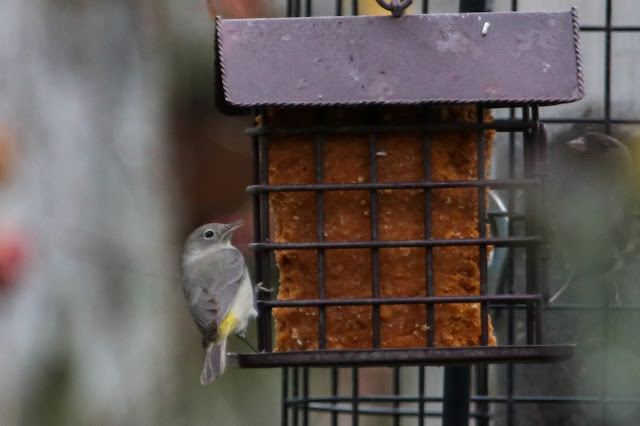 It was a lifer but I still lacked enthusiasm.

In other news I have been doing some more work in my future 5-mile Radius and I think I even found what I am going to call my patch.  It's a piece of the Burnt Bridge Creek Trail about a mile and a half from Jacob's house called Meadowbrook Marsh Park.  There is the main bike path through it along with some smaller trails, plus a duck pond and a marshy field. 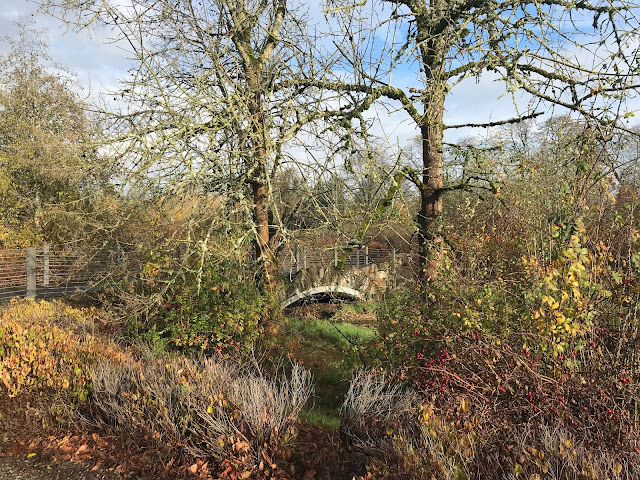 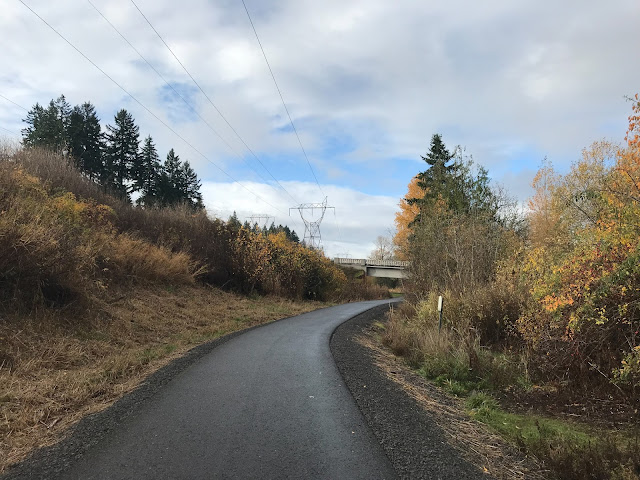 My first time there netted me 31 species which is decent enough for the time of year.  A sampling: 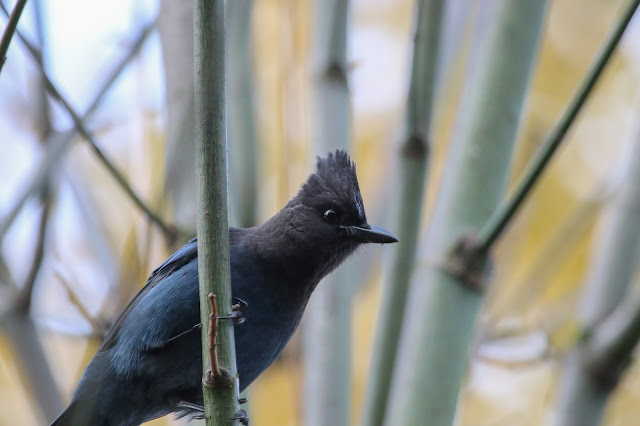 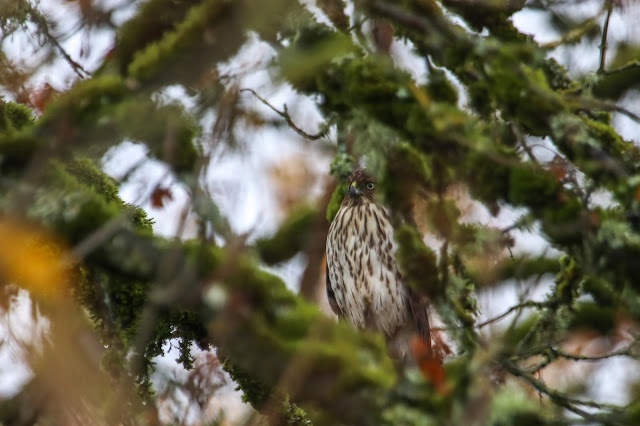 This Cooper's Hawk flew in when I pished 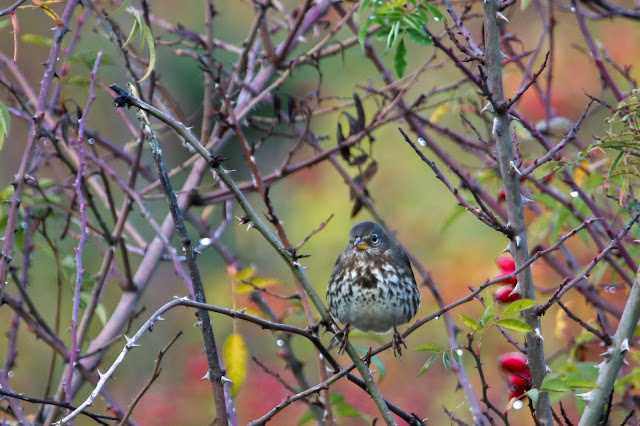 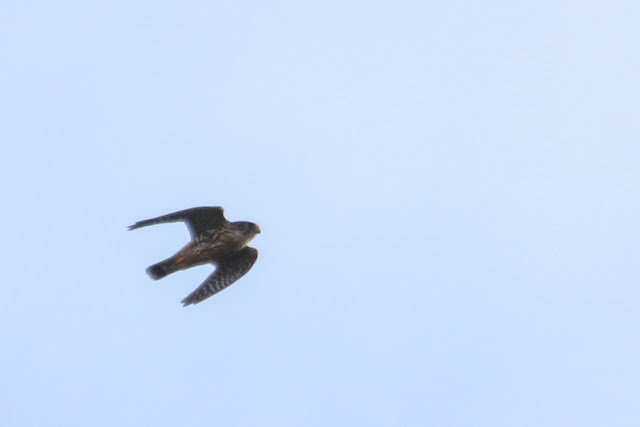 The other day I decided to try walking there from the house with Ralph and it only took about 30 minutes.  I'm leaning towards starting a new motorless list for 2018 with a place like that so close.

Yesterday I took Jake for a walk at Columbia Springs, another future 5MR spot.  It was a fairly tame walk but at the end we found an American Dipper working a tiny creek that drains into one of the fish tanks.  5MR dipper is a wonderful thing. 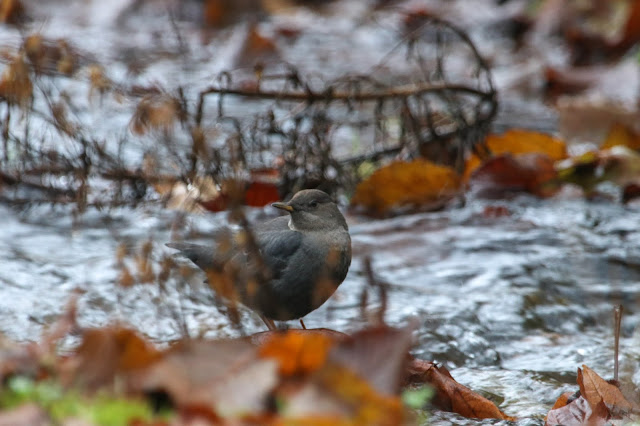 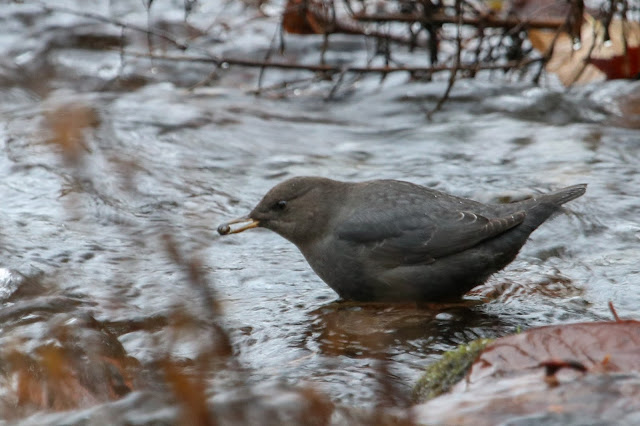 My current 5MR still needs attention so I made a trip recently to Blue Lake Park.  I was psyched to see a wigeon that looked interesting on the far side of the lake. 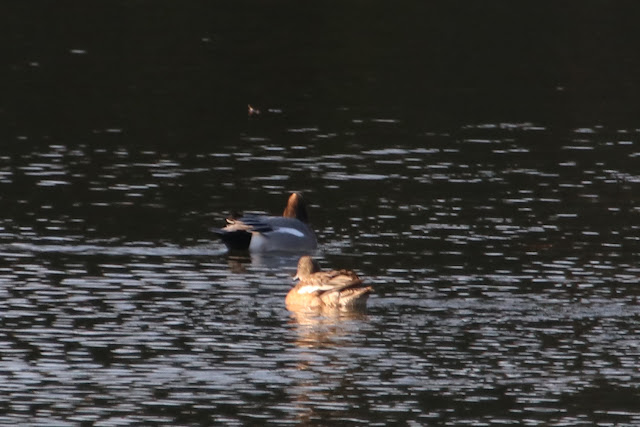 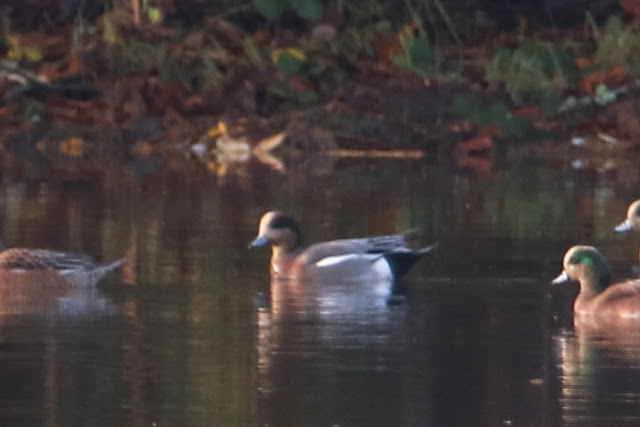 I made my way all the way to the eastern end of the lake where more wigeons were hanging out. 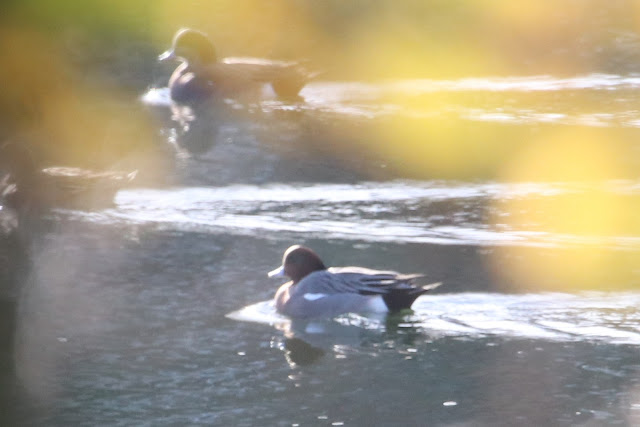 Horrible photo of a real Eurasian!  Species #100 for me at Blue Lake, plus a 5MR year bird. 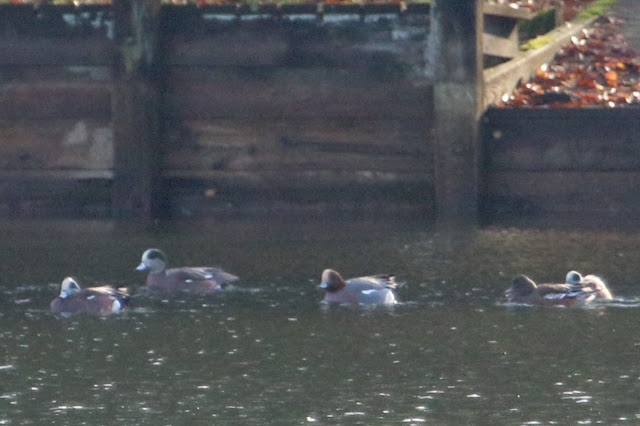 One last outing, a trip to Steigerwald Lake NWR a couple weeks ago.  Nothing rare but plenty of good regular birds. 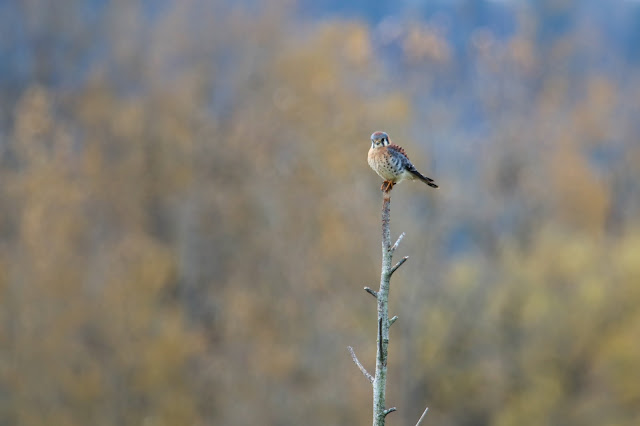 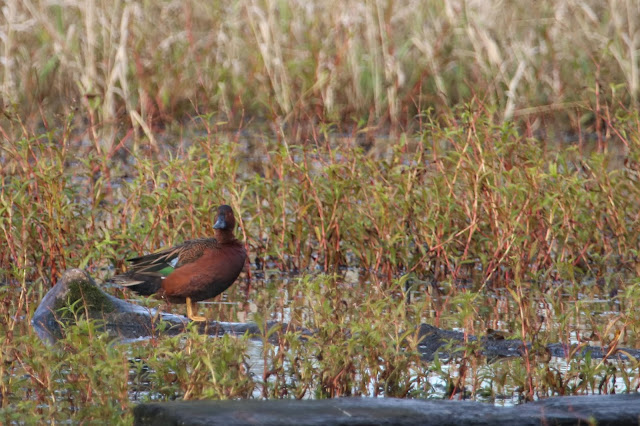 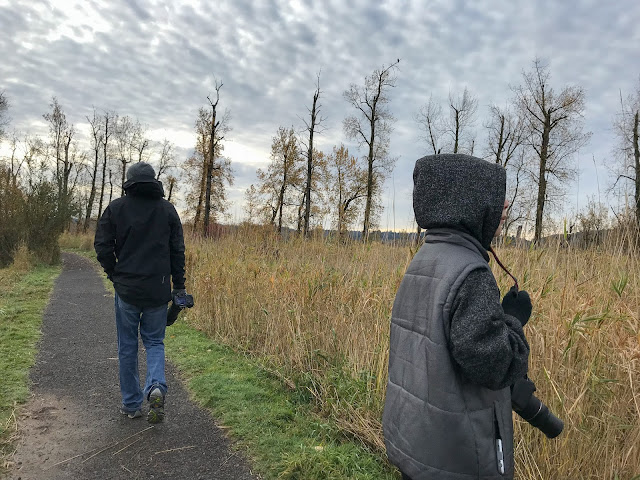 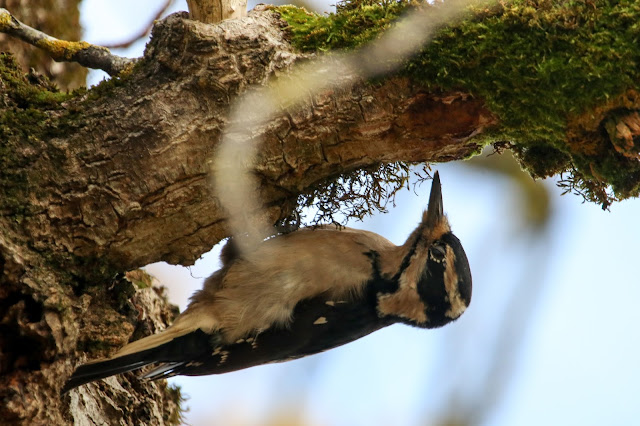 Hairy Woodpecker hiding from a scrub-jay.